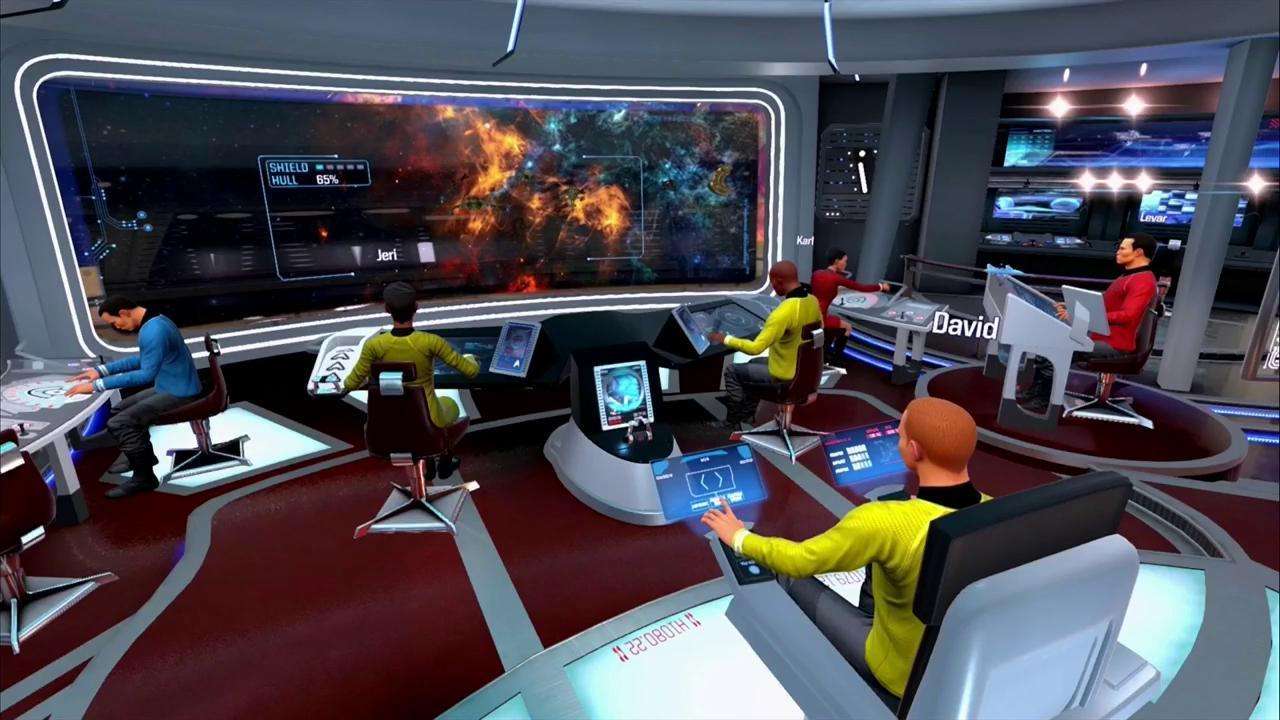 Star Trek: Bridge Crew is the VR title many have been waiting for. Developed by Red Storm Entertainment and published by Ubisoft, Bridge Crew puts you in the role of one of 4 key bridge crew members on the USS Aegis –an experimental Federation Starship that is tasked with finding a new home for the Vulcans. The story mode takes place in the 2009 Star Trek reboot universe – but that is in aesthetic and incidental story details alone. This is definitely a Star Trek experience, but one that ends up feeling a little light. 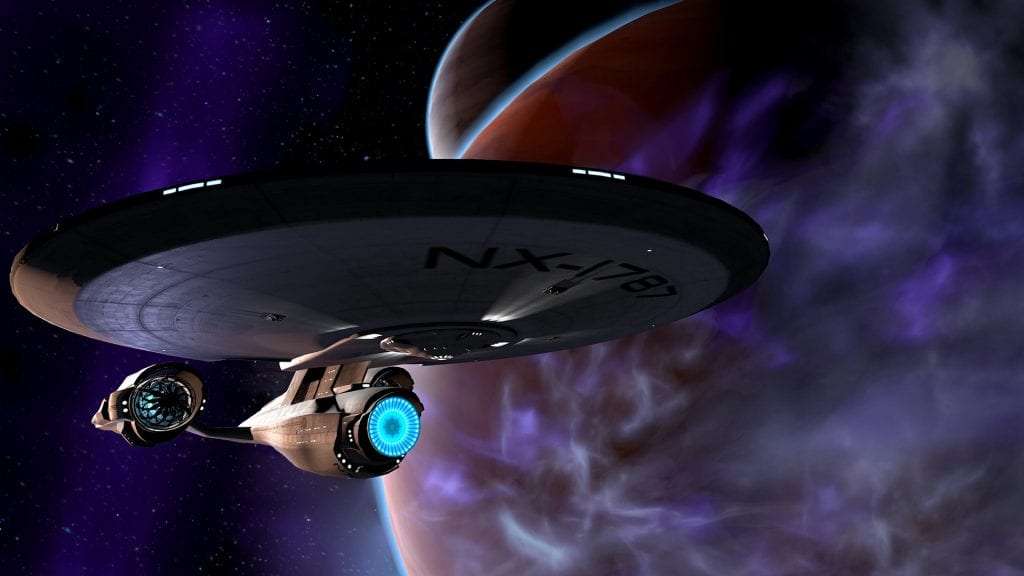 The menu screen cleverly places you on a shuttle craft making its way to USS Aegis – reminiscent of the long introduction to the refitted Enterprise in Star Trek: The Motion Picture. It is a very effective introduction made more so in VR. From the shuttlecraft menu you are able to create and customize your avatar, take the tutorials, play the game solo with an AI crew, start a private group or jump into a random public match.

The tutorial continues your immersion into the Star Trek universe.  You find yourself on a type of proto-holodeck that serves as a bridge simulation. From here, you can take lessons on each one of the bridge positions, starting with the Captain. The captain’s tutorial also teaches you how to play the game in single player by issuing orders to AI and taking them over if you need to. This is both essential and effective at teaching you the basics of your station – plenty to get you playing with others or diving into the campaign with AI crew mates.

The campaign is very short. There are 5 missions, each taking about 30 minutes to complete. That doesn’t sound like a lot of content because it’s not. There is replayability though, as you can try multiple different crew stations in multiple scenarios. The campaign itself really leaves a lot to be desired and is generally forgettable. Missions will have you scanning various objects while avoiding anomalies, and sneaking around to avoid combat.  Combat with enemy vessels can be exciting, but with a crew that knows what it’s doing, fighting multiple ships at once can be no sweat. In fact, Star Trek: Bridge Crew sometimes doesn’t seem to have that much challenge beyond working with strangers or juggling the AI. Though the challenge ramps up in the last two missions, there doesn’t seem to be as many white-knuckle tense moments as I was hoping for. Even when the bridge was exploding around me I rarely felt in danger. 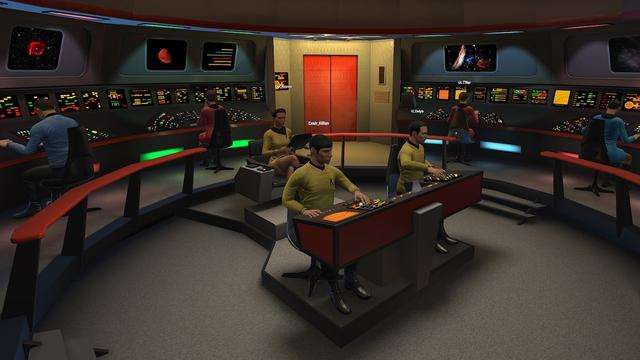 There are 4 crew stations you can choose from: captain, helm, tactical and engineering.  Captain is the most demanding, as you must be able to communicate effectively – and it will be the position you find yourself in the most if you’re playing single-player. Helm maneuvers the ship, tactical scans targets and shoots things, and the engineer dispatches damage control teams as well as determining where the ship’s power will go. Each of the positions feels equally important with most having you constantly working. The only time I found myself sitting with nothing to do was when I was the engineer – but it can be very exciting in combat.

Playing with others is what Bridge Crew is all about at its core. One of its best features is the ability to play with those playing other versions of Bridge Crew – Vive, Rift and PSVR can all play together. You can create a private lobby for friends to join or try your luck with quick match. Since I had no friends with both a VR headset and Star Trek: Bridge Crew, I was at the mercy of quick match- and I was seldom disappointed with the crew that was assembled. As it is right now you drop directly into a random matchmaking room and wait for other players to join. I found that most people are willing to let you try things out, and help out newer players. Most players can work together and communicate well. If you want to play but you’re afraid to socialize, beware:  You can’t even play in multiplayer without being able to pass a microphone check to prove that you can talk to your crew. After all, without effective communication, your ship won’t function well. 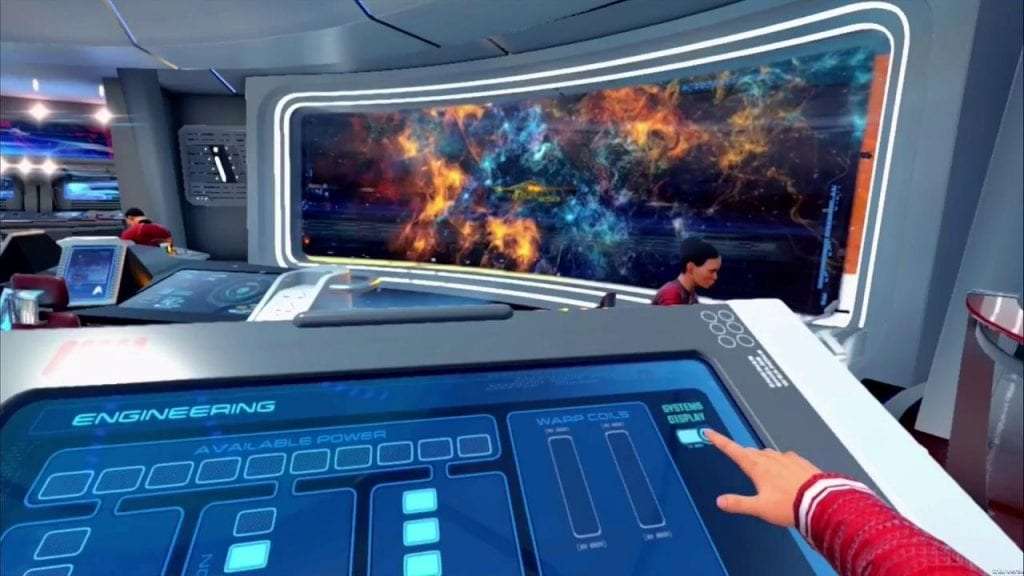 If you tire of the replaying the campaign missions there is the option to play the aptly named, “continuing voyages.” These randomly generated missions range from exploring anomalies to rescuing ships in distress. Rarely, though, did I find a crew that wanted to do these missions. In my experience they are often short and feel like they end just as they get started. Even though they are indeed random, they can start to feel a bit samey with most scenarios having you travel somewhere, scan something, shoot at something, and repeat. 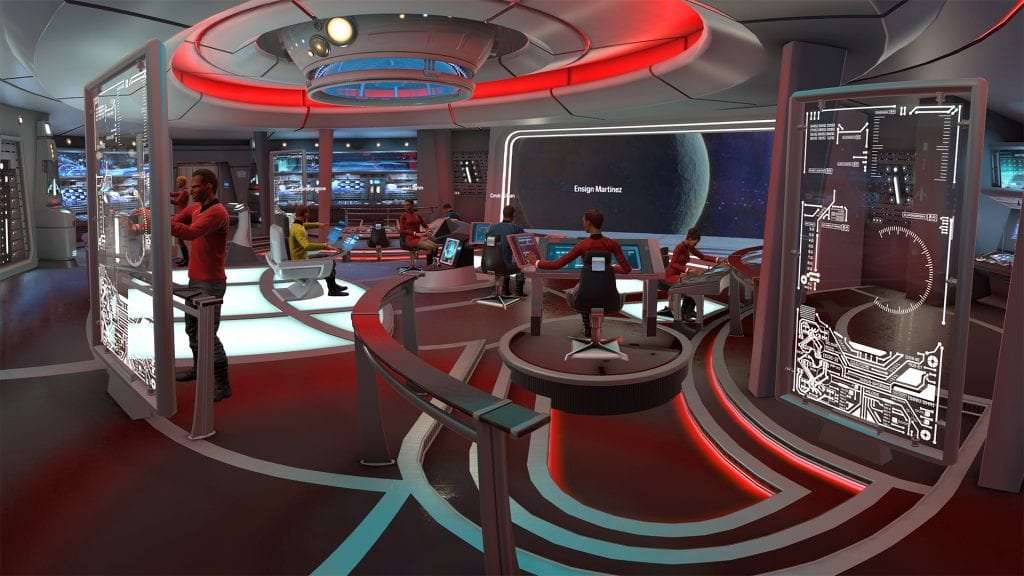 The Original Series bridge set was a late addition to Star Trek: Bridge Crew but an exciting one: you can actually man the bridge of the USS Enterprise from the 1960’s television show. No bloody A, B, C or D. The aesthetic is recreated so accurately it adds an extra layer of difficulty – this is for experienced crews only. Control panels consist of dozens of unmarked lights. Only some of these lights are buttons and they seem to be arbitrarily placed. Fortunately, you can mar the aesthetic s for the sake of functionality – there is a help overlay that labels each of the buttons for you.

Ultimately though, even for its faults, Star Trek: Bridge Crew manages to be one of the best VR experiences out there, if only by virtue of being one of only a handful of “complete” VR games. Red Storm Entertainment has laid a solid foundation with plenty of room for more content – I hope there is enough popularity to warrant it. There is fun here – doubly so if you can scrounge together some friends. Star Trek: Bridge Crew is available on PlayStation VR HTC Vive and Oculus Rift. 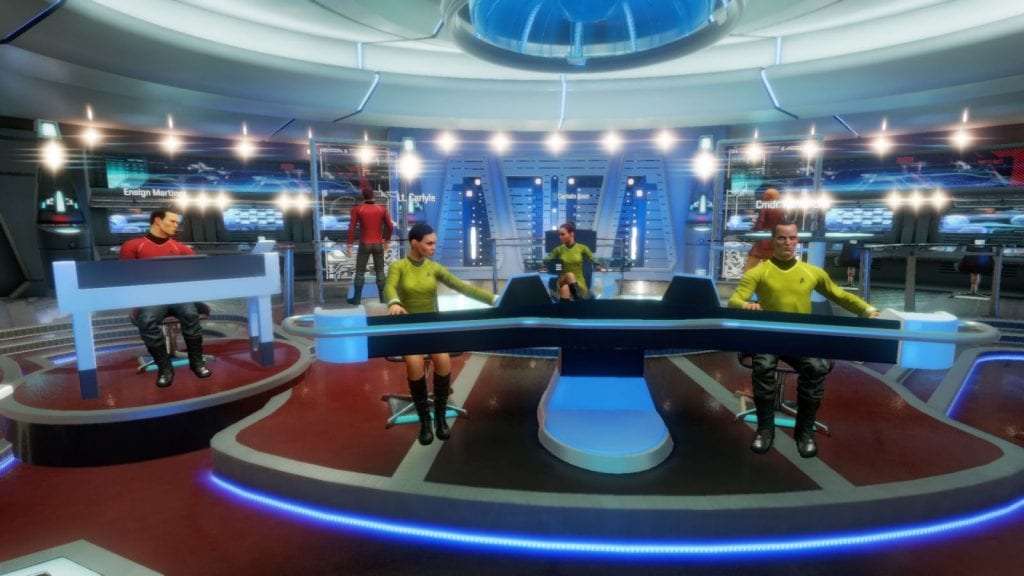