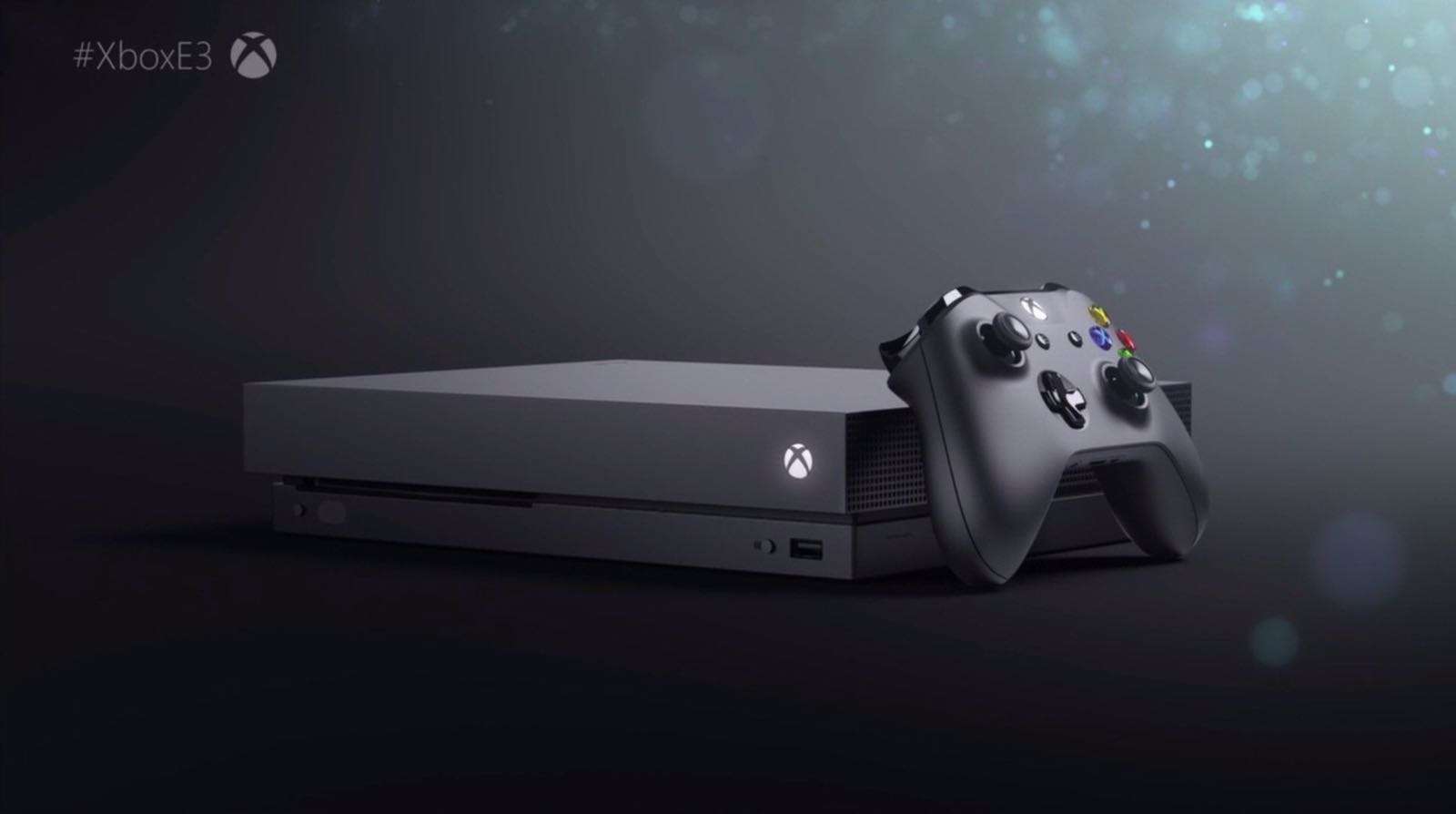 So Microsoft has just wrapped up their E3 outing for this year and boy did they cram a lot in. With everything from a full official reveal of Bioware’s newest IP, Anthem, to the exact details of when and where we can get our hands on the new Xbox One X console and for how much. Below, you’ll find all the videos and info you need to get up to speed with what Microsoft had to announce.

This was the big announcement of the night and can basically be seen as the Xbox One 2.0. The official specs of the console have been coming out over the last months and weeks but tonight Microsoft confirmed everything, including that it will launch on November 7th 2017 for the eye-watering price of €499 worldwide. It’s also the smallest Xbox console ever.

Along with a select number of first party titles such as Gears of War 4 getting free Xbox One X updates, at least 30 third party developers have also signed up to upgrade their current titles to support the power of the new Xbox One X.

Xbox One is also getting backwards compatibility for original Xbox game which went down a storm at the show.

More information is incoming and we’ll be sure to update this post once we have it.

Kept until the very end and definitely one of the biggest reveals of the night has to go to BioWare’s newest title, Anthem and this video didn’t disappoint. What did dissappoint though was that we have to wait until 2018 for this impressive looking title.

To no surprise, Forza Motorsport made and appearance with almost 700 cars on the roster and also included the world debut of the brand new 2018 Porsche 911. Launching on October 3rd 2017.

“Metro Exodus” is an epic, story-driven first person shooter from 4A Games that blends deadly combat and stealth with exploration and survival horror in one of the most immersive game worlds ever created. Flee the shattered ruins of dead Moscow and embark on an epic, continent-spanning journey across post-apocalyptic Russia in the greatest Metro adventure yet. Explore the Russian wilderness in vast, non-linear levels and follow a thrilling story-line inspired by the novels of Dmitry Glukhovsky that spans an entire year through spring, summer and autumn to the depths of nuclear winter.

Ubisoft must have leant this footage of their upcoming new instalment of Assassin’s Creed to Microsoft for their press conference. As many of the leaks showed, we’re going back to Egypt for the origins story of the Assassins. Launching October 27th 2017.

“PLAYERUNKNOWN’S BATTLEGROUNDS” is a tactical, last-man-standing shooter being developed with community feedback where players must fight to locate weapons and supplies in a massive 8×8 km island to be the lone survivor.

This PC smash hit is coming exclusively to Xbox One later this year with Xbox One X support.

In “Deep Rock Galactic,” join a team of badass space dwarves in this stylish co-op first-person shooter for one to four players. Fight, dig and explore your way through enormous procedurally generated cave systems, uncover the riches and make it out alive.

“State of Decay 2” is the ultimate zombie survival fantasy game, where you build a lasting community in an open world filled with hostile zombies, human enemies and the valuable gear necessary to keep your community alive. Play solo or invite up to three friends in multiplayer co-op to overcome challenges and survive as a group while defining your own unique story. Your choices shape the identity of your community, ensuring that no two stories are alike — and remember, once you lose a survivor, they’re gone forever thanks to the return of permadeath in “State of Decay 2.” Available worldwide as an Xbox Play Anywhere title in spring 2018.

“The Darwin Project” takes place in a dystopian post-apocalyptic landscape in the Northern Canadian Rockies. As preparation for an impending Ice Age, a new project, half science experiment, half live entertainment, is launched. It’s called “The Darwin Project,” and it challenges participants to survive the cold and fight to the death in a treacherous arena. “The Darwin Project” offers a competitive multiplayer third-person survival experience featuring at its core a new gameplay innovation: the manhunt. In his or her path to victory, a player must survive extreme environmental conditions, track opponents and set traps in order to win.

Mojang and Microsoft announced a new version of “Minecraft” that will bring the complete “Minecraft” experience to everyone on gaming consoles, mobile, VR and Windows 10 PCs this summer. The unification of “Minecraft” across platforms will transform the “Minecraft” experience everywhere from a game to a platform, providing simple access to massive community servers, community creations from the Minecraft Marketplace, Realms, dedicated servers and more. The team also announced the Super Duper Graphics Pack, a new optional upgrade for in-game visuals in stunning true 4K HDR.

One of the world’s most famous and beloved anime franchises returns to its 2D fighting-game roots in “DRAGON BALL FighterZ”. Developed by Arc System Works, one of the most celebrated developers of classic 2D fighting titles, the game delivers an explosive, action-packed experience that combines classic 2D fighting visuals with advanced graphics that look and feel as if they are ripped straight out of the DRAGON BALL anime series.

“Black Desert” is a sandbox-oriented MMO featuring next-gen graphics, full-action combat and an immense, seamless world full of adventure and danger. Travel through the lands in search of treasure and adventure or become one of the top craftsmen in the land. Set up trade routes and breed horses or compete against other guilds in epic siege warfare.

Experience a two-dimensional cyberpunk open world, built with four unique districts each with distinct architecture, cultures and industries. Experience action and infiltration gameplay in the great tradition of cinematic platformers and travel between districts using taxis, ferries or monorail while trying to keep a low profile and remain undetected. Meet a diverse, inclusive cast of complex characters to interact with through meaningful, branching dialogue and enjoy varied gameplay such as driving down epic highways, flying drones and hacking droids to do your dirty work.

This amazing looking title is like an 8BIT version of Blade Runner!

A mysterious disaster has brought collapse to the world. Deep within the devastation lies an abandoned society for Revenants. Having lost their former memories, these Revenants must submit to their thirst for blood to retain their final shreds of humanity. Without blood, they would devolve into mad ghouls known as the Lost. These shells of former Revenants wander the land, deformed and deranged, slaves to their own bloodlust. Team up and embark on a journey to the ends of hell to unlock your past and escape your living nightmare in “CODE VEIN.”

This JRPG looking title is launching in 2018

With its launch date officially announced for next year, we got a comprehensive look at some impressive gameplay.

Developed by Playful Corp., “Super Lucky’s Tale” is a delightful, playground platformer for all ages that follows Lucky, the ever-optimistic, energetic and lovable hero, on his quest to find his inner strength and help his sister rescue the Book of Ages. Along the way, encounter a hilarious supporting cast of friends and adversaries. Available worldwide on Nov. 7 as an Xbox Play Anywhere title alongside the launch of Xbox One X.

“Crackdown 3” brings the boom with its worldwide campaign gameplay reveal, where players will stop crime as a superpowered Agent in a sandbox of mayhem and destruction. Developed by Microsoft Studios in collaboration with Sumo Digital and Reagent Games, “Crackdown 3” delivers four-person campaign co-op, as well as an all-new multiplayer mode where destruction is your ultimate weapon, powered by the Microsoft Cloud. Available worldwide on Nov. 7 as an Xbox Play Anywhere title alongside the launch of Xbox One X.

Available (finally) beginning Sept. 28, 2017, as an Xbox Play Anywhere title, “Cuphead” is a classic run-and-gun action game heavily focused on boss battles. Inspired by cartoons of the 1930s, the visuals and audio are painstakingly created with the same techniques of the era, i.e., traditional hand-drawn cel animation, watercolor backgrounds and original jazz recordings. Play as Cuphead or Mugman (in single player or local co-op) as you traverse strange worlds, acquire new weapons, learn powerful supermoves and discover hidden secrets while you try to pay back your debt to the devil!

This action role-playing game is about a wanderer in search of a place to call home. There is no sun, and the only natural light comes from eruptions that cover the land in ash. This is a world where nothing lasts, no matter how tightly you cling to it. At its core, “Ashen” is about forging relationships. Players can guide those they trust to their camp — together, you might just stand a chance.

Life is Strange: Before the Storm

“Life is Strange: Before the Storm” is a new three part standalone adventure set three years before the first game in the BAFTA award-winning franchise. “Life is Strange: Before the Storm” features Chloe Price, a 16 year-old rebel who forms an unlikely friendship with Rachel Amber, a beautiful and popular girl destined for success. When Rachel’s world is turned upside down by a family secret it takes their new found alliance to give each other the strength to overcome their demons.

The second game from Fullbright, creators of the critically acclaimed “Gone Home,” “Tacoma” puts you in control of Amy Ferrier, an independent contractor sent to Lunar Transfer Station Tacoma to recover sensitive data. As she explores the station, she unearths why the previous crew of six have been evacuated, gathering clues to what exactly went wrong. Like “Gone Home,” it’s a game where you pull details of the narrative from the environment, both physical and digital. “Tacoma” is a story about people and relationships, even in the isolation of outer space. Available Aug. 2 on Xbox One and Windows 10.

Monolith’s sequel to the hugely successful Shadow of Mordor was shown off with a lengthy gameplay video and a humourous Australian sounding giant orc!

Ori and the Will of the Wisps

From the creators of the multi-award-winning “Ori and the Blind Forest” comes the highly anticipated sequel, “Ori and the Will of the Wisps.” Embark on an all-new adventure to discover the mysteries beyond the forest of Nibel, uncover the hidden truths of those lost and unravel Ori’s true destiny.