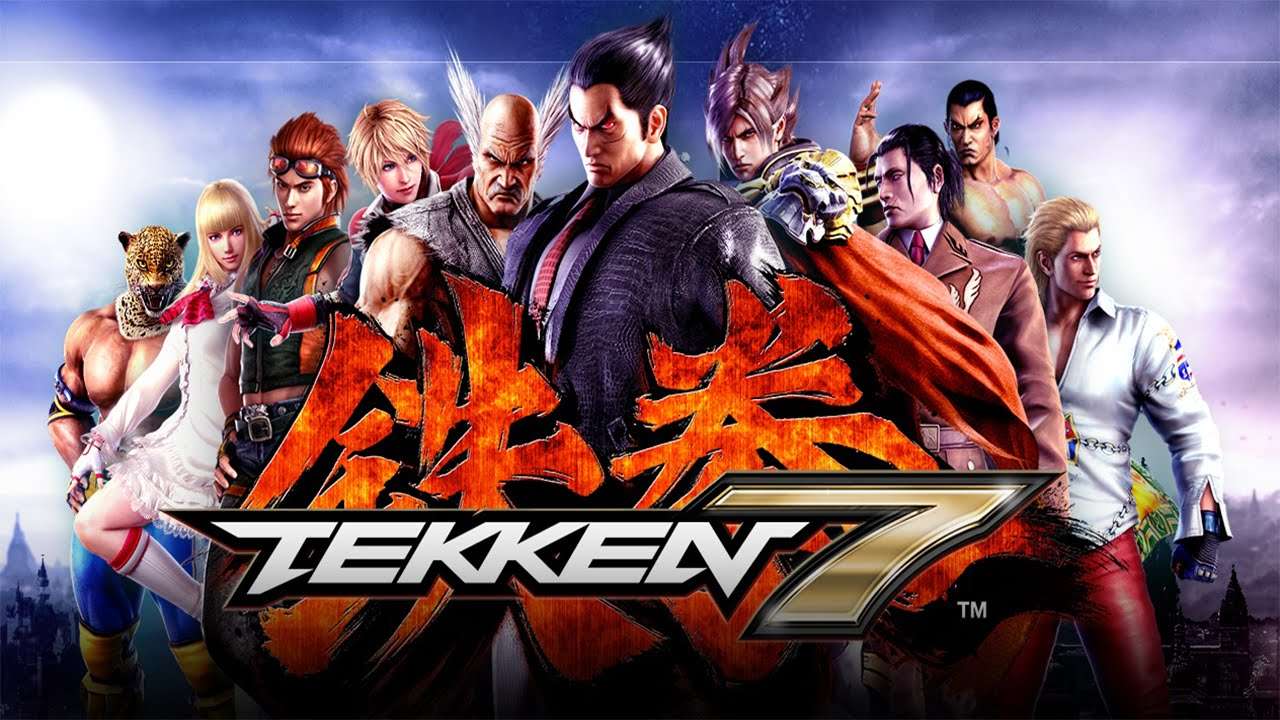 With its recent release on home consoles, many would believe that Tekken 7 is fresh off the production line from Bandai Namco but, in actually fact, the title has been in arcades, on a limited run, for around 2 years. This time can been seen as a trial period for Namco Bandai to test out what works and doesn’t work for their latest instalment in the Tekken franchise and the first time Tekken has been on the current gen of consoles.

Entering what is quite a crowded market now with some excellent entries from the likes of Injustice 2, Tekken has a lot to live up to but is it worthy of your hard-earned cash? Read on to find out what we thought of Tekken 7. 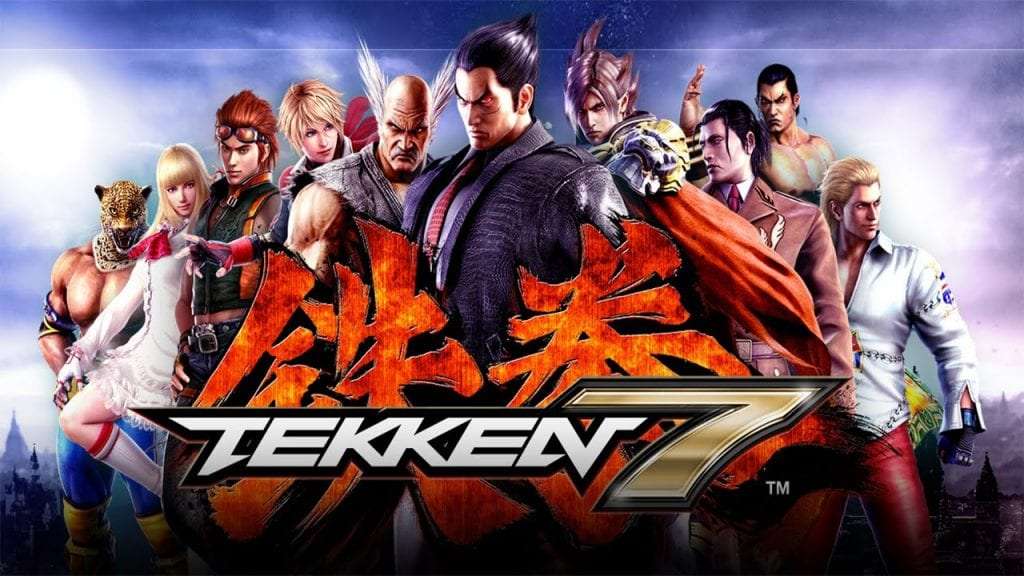 For its main story mode, Tekken 7 is uses a quite unimaginative and pretty boring ‘journalist report’ structure to tell the ins and outs of his investigation into the story of Heihachi Mishima. His narration leaves a lot to be desired but the pace of the overall story is nice and quick. Jumping between a handful of cutscenes and short fights, the story never gets too bogged down in one place.

The main narrative arc of the game focuses on the on-going battle between Heihachi and Kazuya and does a great job of reframing the iconic family feud for the modern generation. The inclusion of old Tekken cutscenes was surprising at first but works really well as they add a touch of authenticity to the narrative. 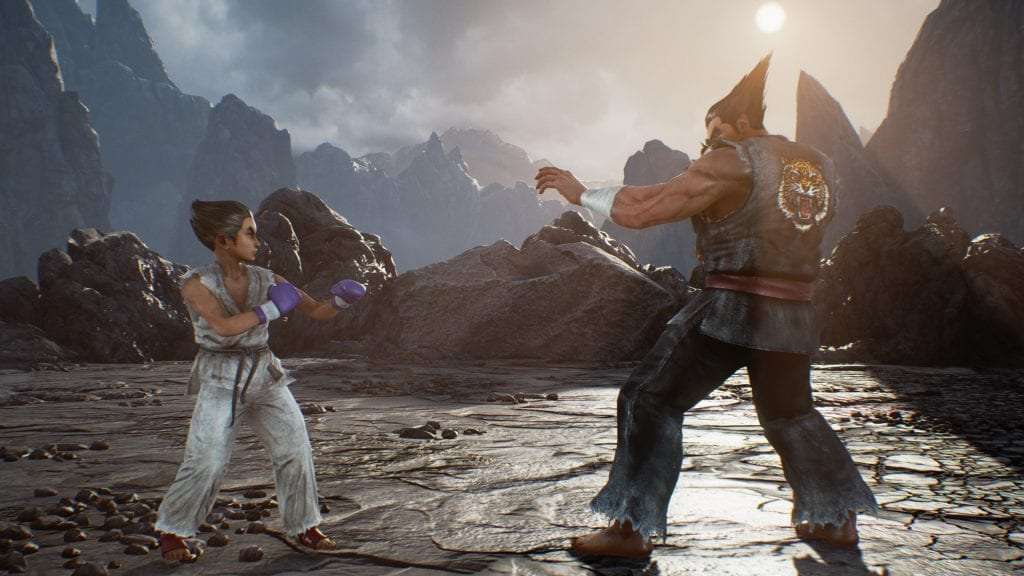 Story mode is rather short and the moments that deviate from the story of the Mishima Zaibatsu are profoundly boring. Some cutscenes are fully animated while others use a motion comic motif. It comes across as a cost cutting measure rather than a stylistic one. Characters that aren’t present in the story feature in “Character Episodes” which are single fights against a set opponent with a small cutscene following each of them. These endings are where Tekken lets its hair down and cranks the camp factor up significantly. There has always been a weird quality to Tekken (fighting pandas, talking men made of wood, etc.) and that is evident in these short character stories. 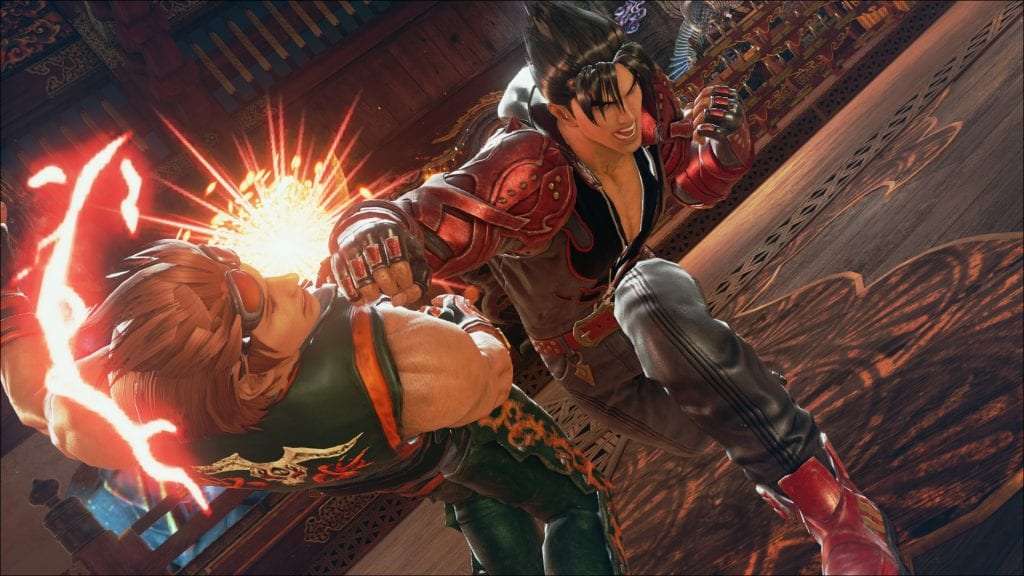 The main story isn’t completely dry, however, as a special appearance from Street Fighters Akuma takes the narrative in some strange directions. I was surprised how focused the game was on such a significant cameo. It certainly lays the seeds for the revival of the once announced Tekken X Street Fighter, and after playing as Akuma in the game, it does feel like that’s what they are building up to.

Tekken 7 is a 3D fighter, but for the majority of the time, you won’t notice. While dodging into and away from the screen in order to dodge projectiles is a key strategy, I found most of my encounters took place as if the game was locked to 2D. Fights are short, and moves do a lot of damage. Many stages have destructible elements such as transitioning through floors or walls, but the speed at which health decreases is so fast that I rarely used them, or had them executed against me. 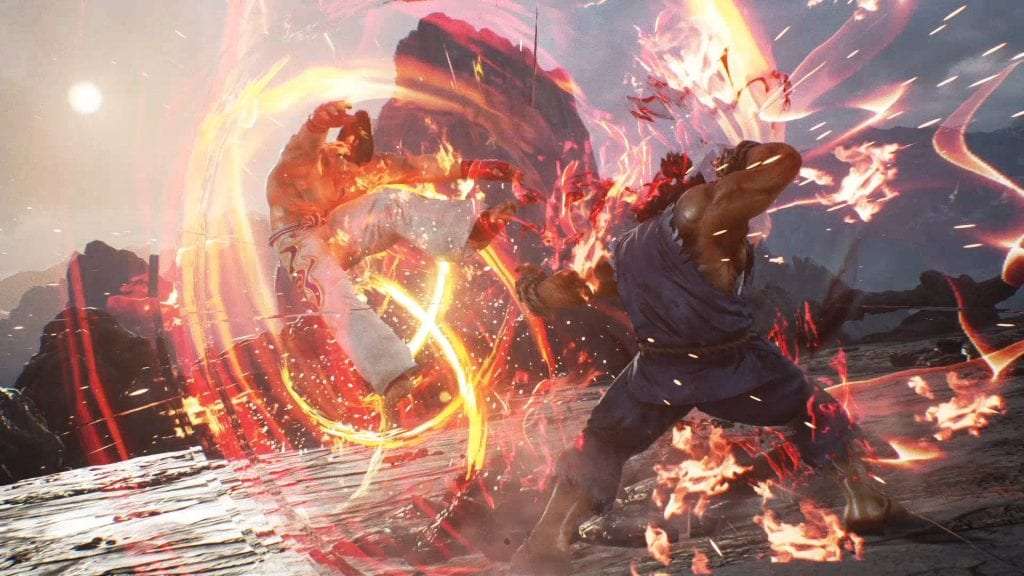 Learning and executing combos is a key part of success on harder difficulties and online in Tekken 7. While the strings can be long and have brutally tight timing windows, they are very satisfying to pull off. Even if all you can do is mash, you’ll still be able to pull off some decent enough looking moves. New to the series are Rage Arts. These super moves become available once you reach under 25% health and deal a significant amount of damage, similar to Injustice 2’s over-the-top manoeuvres, these can turn the tide of battle in an instant. They can be executed by pressing R1 but are easily blocked. The skill comes in integrating them into a chain in order to use them with devastating effect. 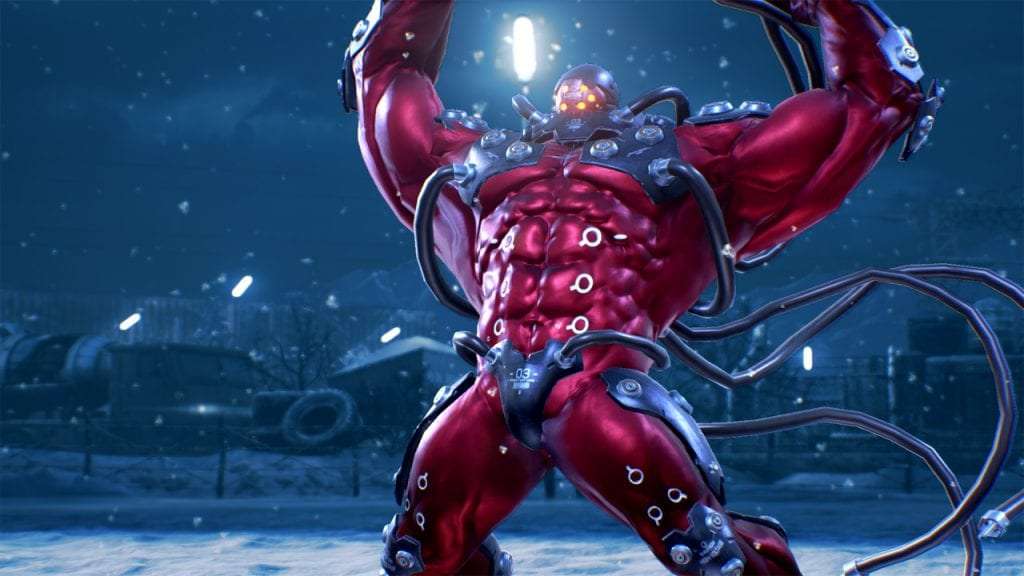 Aside from story mode, Tekken’s offline offerings include a standard arcade mode, as well as treasure battle. In treasure battle, you’ll fight a series of encounters which all have a piece of treasure as a reward. These treasure chests contain the games sizable pool of loot. Again this is similar to Injustice 2, but in Tekken, the loot does not affect stats. Some projectile moves are unlocked with special items like rifles, but these take so long to execute and do so little damage that they are more of a fun gimmick than a game breaking addition. The loot system is a great addition in terms of personalising your favourite characters. The range of options is substantial, ranging from a shower head that will make your character soaking wet to a full outfit for King inspired by New Japan Pro Wrestling’s Kazuchika Okada. Wearing this entire outfit unlocks a special Rage Art exclusively for King, which I use religiously.

Tekken 7 runs at a rock solid 60 FPS but at a cost. The game runs at 1080p resolution on a PS4 Pro with the character models and stages appeared sharp and detailed. There are plenty of stages with a large variety of art styles and themes. Stages also vary in shape, making for interesting strategic changes such as attempting to force your opponent into a corner in order to break them through the wall. However, as I mentioned earlier, fights are over so quickly, that these moments of destruction are rare. 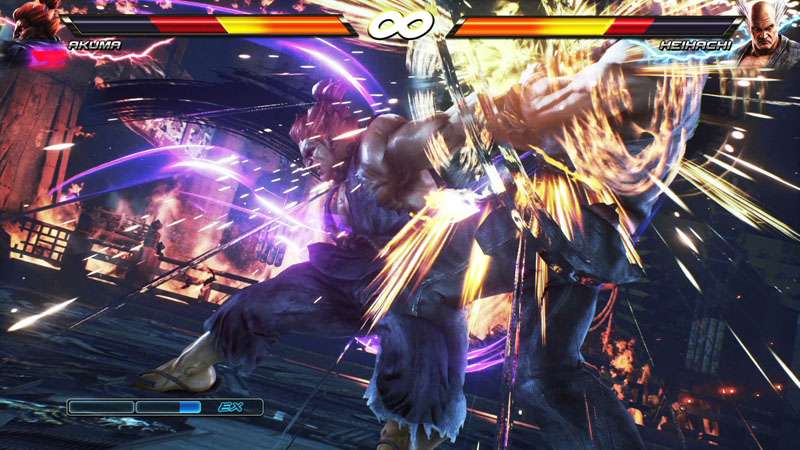 Tekken 7’s soundtrack is fantastic. It not only features a host of new loud, energetic and imposing electronic and metal tracks, but also includes the soundtracks to every previously released Tekken game ever, giving the game an insane number of songs to listen to as you play.

Tekken 7 is fun and easy to learn, the character roster is deep and varied and the wealth of offline content is admirable. While the story mode under delivers in parts, the character episodes are a nice concession for characters that don’t get their due in the main narrative. Tekken’s wealth of legacy content is a fantastic addition and something more games should learn from as is the huge amount of customisation options. There has never been a better time to be a fighting game fan.

Tekken 7 is available now for PS4, Xbox One and PC. 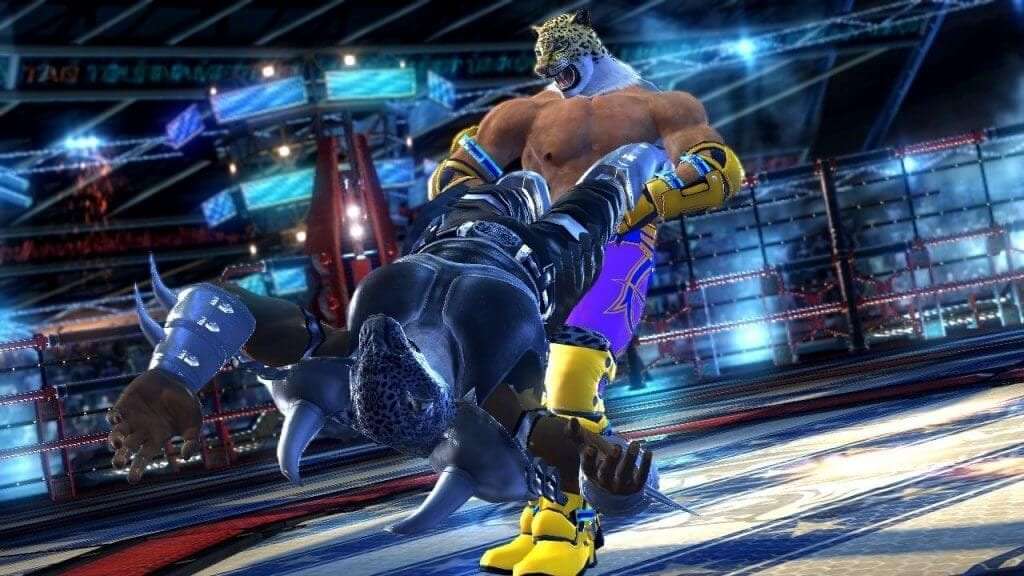