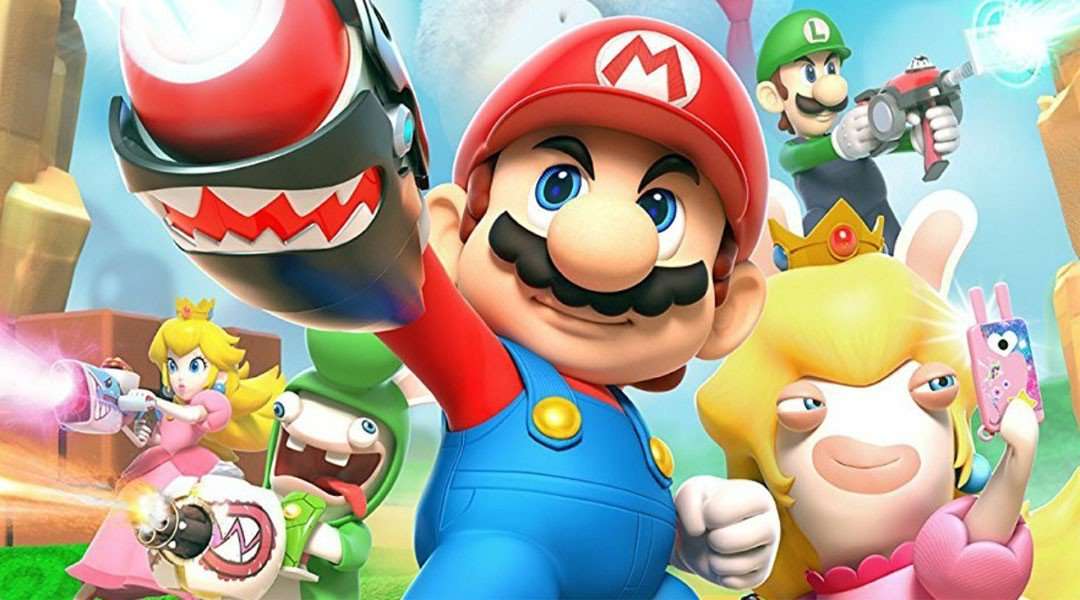 When everyone first heard of a potential Mario and Rabbids crossover game, there wasn’t a single eyebrow that wasn’t raised. The idea of such a famous franchise such as Super Mario mingling in with Rabbids was a very interesting but slightly worrying prospect. Luckily for everyone, Nintendo didn’t shoot down the idea, and today we have a brilliant melding of Super Mario, Rabbids, XCOM, and there’s some Rareware in there too. The Rabbids are by far the weirdest crossover Mario has even been a part of, but it just works. 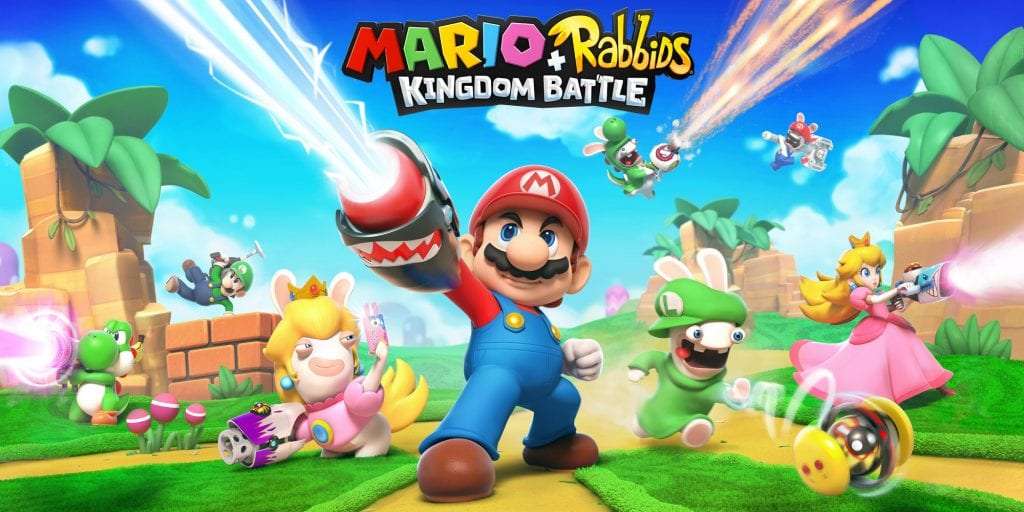 The game begins in the basement of an inventor who is a big fan of Nintendo; this fan has created a VR-like headset device which can combine two items into one, and it mostly works. The Rabbids arrive in their washing time machine, take the visor, and end up in the Mushroom Kingdom — but not before combining everything in the room including Mario, Luigi, Peach and anyone else you can think of from the Mushroom Kingdom. Beep-O, the game’s robot vacuum-looking guide, will take Mario and friends through the Kingdom to stop the rogue Rabbids who caused all this trouble.

The combat in Mario + Rabbids is fairly simple on the surface — you’ll want to take cover to avoid getting obliterated quickly, and there are barriers littered around the play fields that will either protect you all of the time or just half of it. Enemies can, of course, flank you and come around, but for the most part if you’re hiding behind something, you’re going to last a lot longer than not. 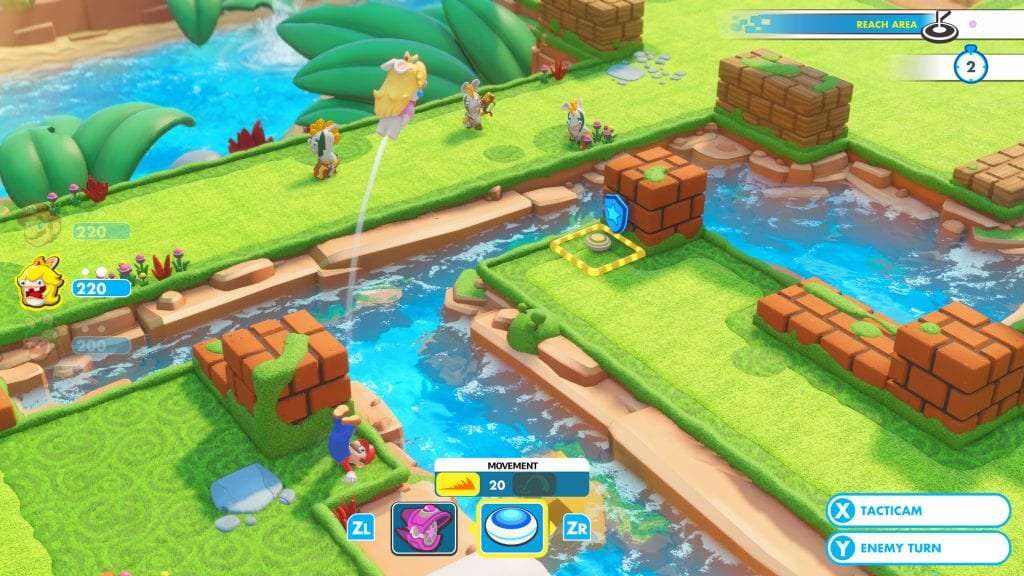 That’s where the simple nature of the game ends and everything else is a little more complicated. Each turn has you moving around the map a limited amount of tiles, but you can extend your reach by spring-boarding off other players. This’ll get you into higher places, or allow you to get out of the way if you’re taking damage or your cover is destroyed. There are warp pipes on most maps as well, which adds some more strategy; you never want to just go head-first into a fight, and it always helps to have the higher ground.

Mario + Rabbids has a range of different weapons to help you in your bid of removing the evil Rabbids from the Mushroom Kingdom and not all of them are guns. There are lasers, remote sentries, hammers and other special abilities as well. The more advanced weapons can also either push enemies out of their hidey-hole, bounce them off the stage for more damage or stick them into place with honey. These abilities are all so great, until they start using them on you as well. Battles can take place over an hour or so which works well with the Switch. 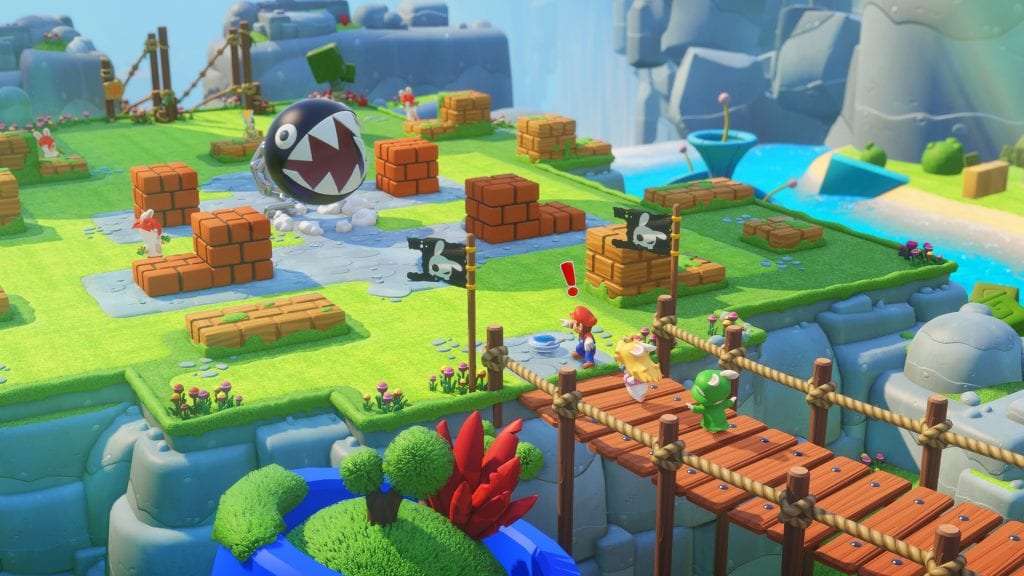 Don’t worry about losing battles too much, you’ll die and have to restart or pick a restart simply because you got a bad critical hit, made a false step, or just messed up. Embrace it.

The battles in the game also have a range of win conditions, from defeating all the enemies, a certain number of enemies, getting to a goal, and there’s even an escort mission or two. Boss battles, as well, all require a different strategy and are fun and unique characters in their own right.

The entire game isn’t all battles, there’s some exploration in each chapter to be had. There’s one strange thing that is weird not to have and that’s jumping. It’s just weird to have Mario not able to jump, but Beep-O, who you ‘follow’ around, can’t jump so I guess that’s that. Exploration is rewarded with unlocks of new weapons, orbs, and trinkets like parts of the soundtrack and 3D models to view in the hub world. Mario + Rabbids also takes on some light RPG elements in the form of skill trees; each character in the game has a different set of abilities and skills in addition to weapons that can be upgraded.

There’s another incentive to explore and that’s because the game looks great. There are a ton of things going on in this messed-up Mushroom Kingdom. The Rabbids have destroyed the pecking order of the world, and there are things broken or Rabbids getting up to mischief all around the place. They’ve even erected statues of themselves. The game’s humour comes out here and it’s fairly cheeky. It’s a little weird to see some childish 90s Rareware-esque potty humour but that ties in oh so well with the soundtrack. 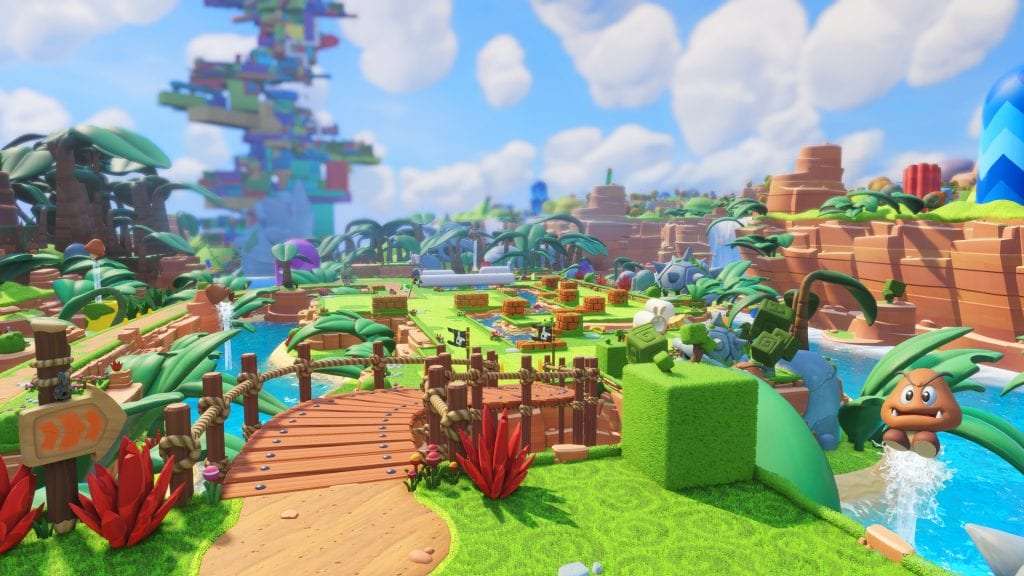 The game’s presentation isn’t entirely perfect, however, with some odd technical problems. At points, the game will stutter and slow down, usually in combat, but it can also happen at random times just walking around Princess Peach’s castle. The hard cuts between cutscenes and combat also feel off and cheapen an overall excellent presentation. There are are also some issues with the camera; you can’t move it at some points and things get in the way, which stops you from looking at the beautiful game world that Ubisoft has created. 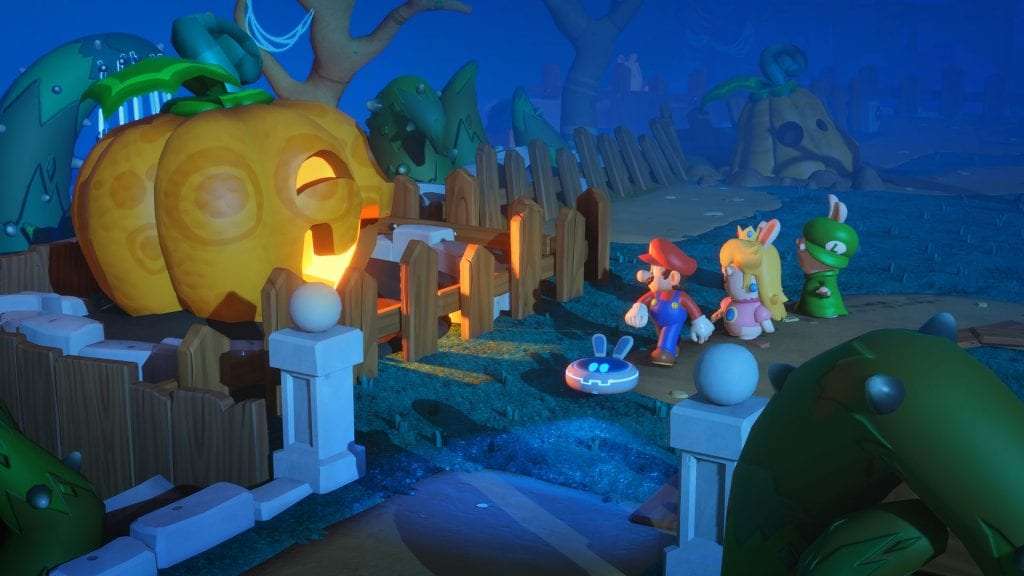 Mario + Rabbids isn’t an easy game either, at least not at the start. It’ll take a while for you to unfurl the mechanics of the game, and until then it’ll punish you. In later stages, you’ll get more confident and unlock more abilities to help you win. Eventually, there seems to be a combo of characters that does better than the others, and that combination must always be made up of Mario, a Rabbid and another character. If you’re finding the game too hard there’s also an ‘Easy Mode’ option before each battle, which will buff your characters and refill your health; when the game gets a bit frustrating it feels good to be able to skip it.

There’s also one part of Mario + Rabbids which many may not know exists — there are some co-operative scenarios to play through with a friend. It’s all local multiplayer and can be played with two Joy-Con or with a Pro Controller each (the entire game is the same). These scenarios are abstract versions of the levels from the stories, and more are unlocked as you play through the game. There’s not a whole lot here, but its good to see it included — can’t have a Switch game without multiplayer can we?

While Mario + Rabbids plays a lot like XCOM, it’s not that game at all, aside from the turn-based strategy part. The game is a surprising and charming tale with a ton of humour and cheerful soundtrack inspired by the 90s. You’ll not only find yourself liking a Rabbids game, but probably loving it. Up there with the best on Switch. 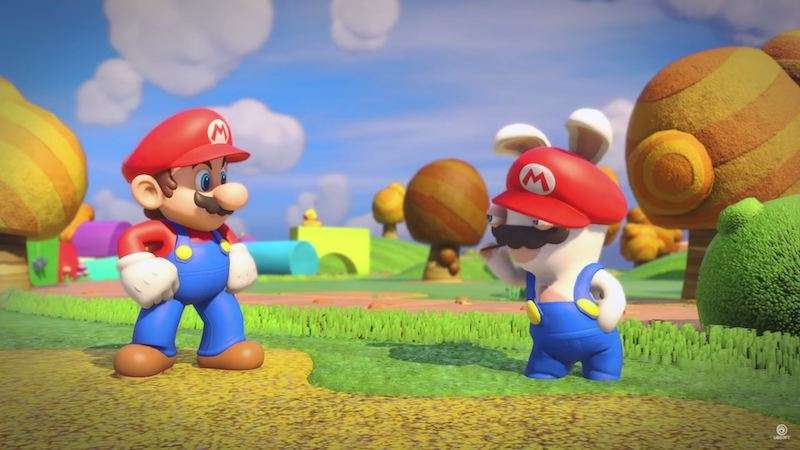