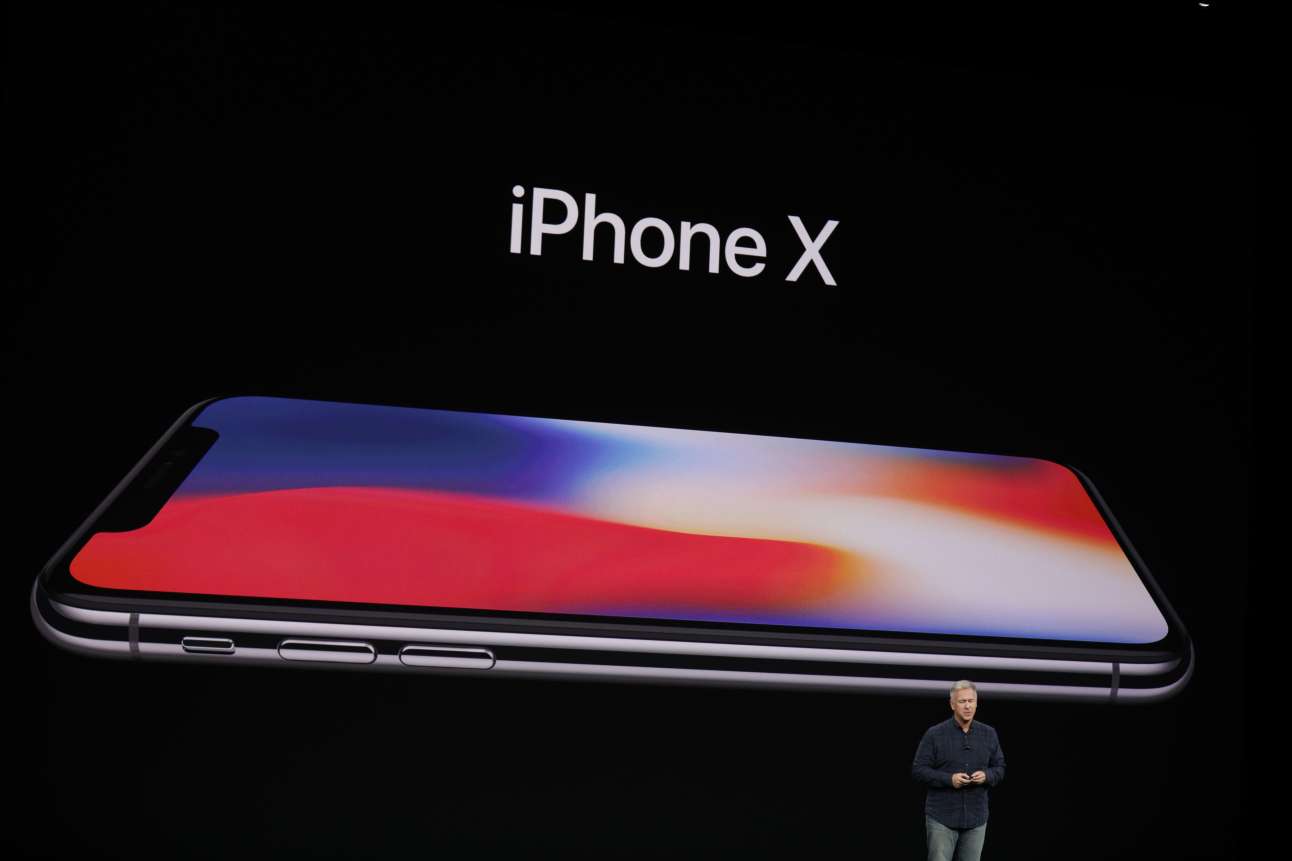 Apple announce the new iPhone X, iPhone 8 & 8 Plus & much more

Apple have just wrapped up things at their annual ‘New iPhone’ event at their brand new Apple Park campus in San Francisco and boy was it an impressive affair. Admittedly, a lot of the sheen had been taken from the event given all the leaks about the new phones but it still didn’t diminish just how impressive they looked, the iPhone X in particular, when they were officially unveiled. 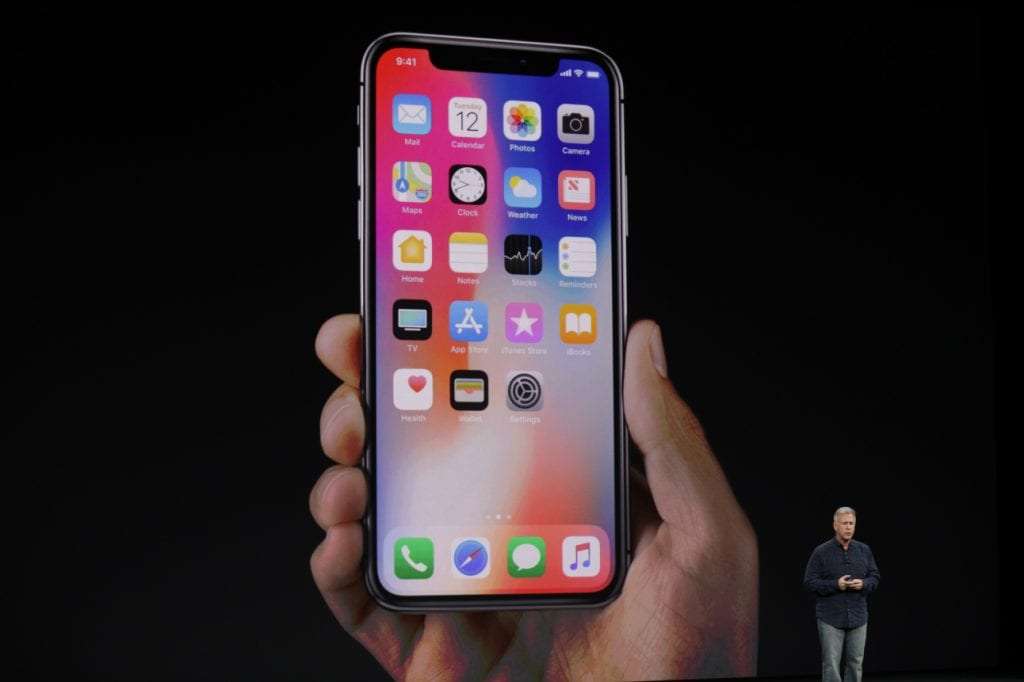 Seen as the biggest announcement of the event and, quite possible, for the company in the last couple of years, Apple officially unveiled their most revolutionary redesign to the iPhone since, well, ever.

Falling in line with all of the previous leaks, the iPhone X’s front is almost completely made up of a 5.8″ OLED 2K “Super Retina Display” (2046×1125 resolution. 455 PPI) that supports HDR10 and Dolby Vision with just a small notch taken out of the top to house the front facing camera, sensors and speaker grill. This area is known as the ‘True Depth Camera System’ which houses an infrared camera, flood illuminator, dot projector and more. 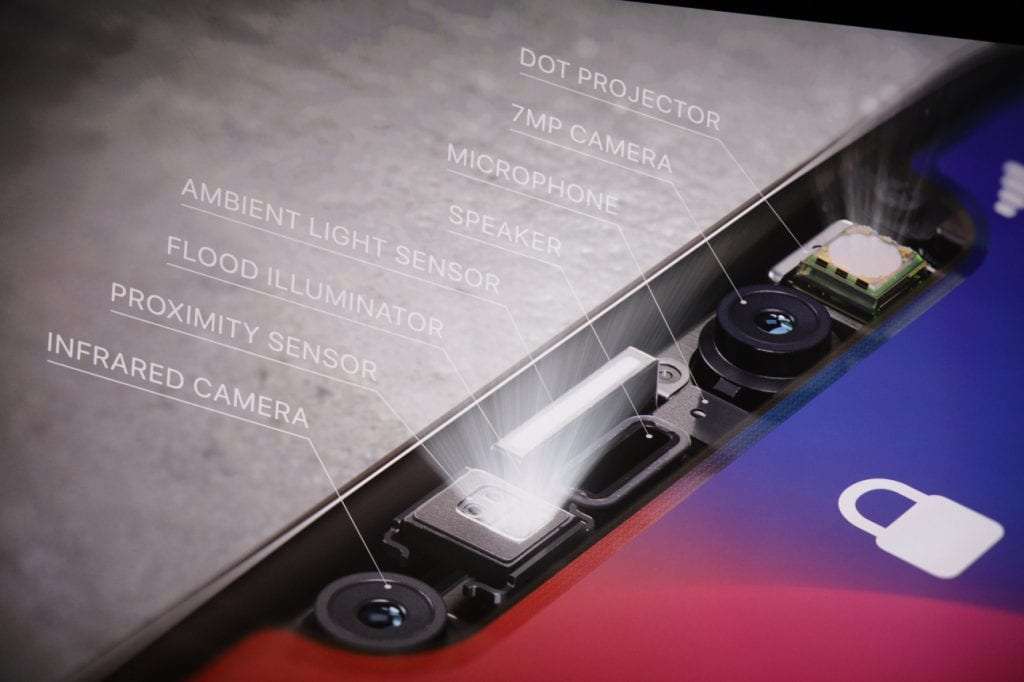 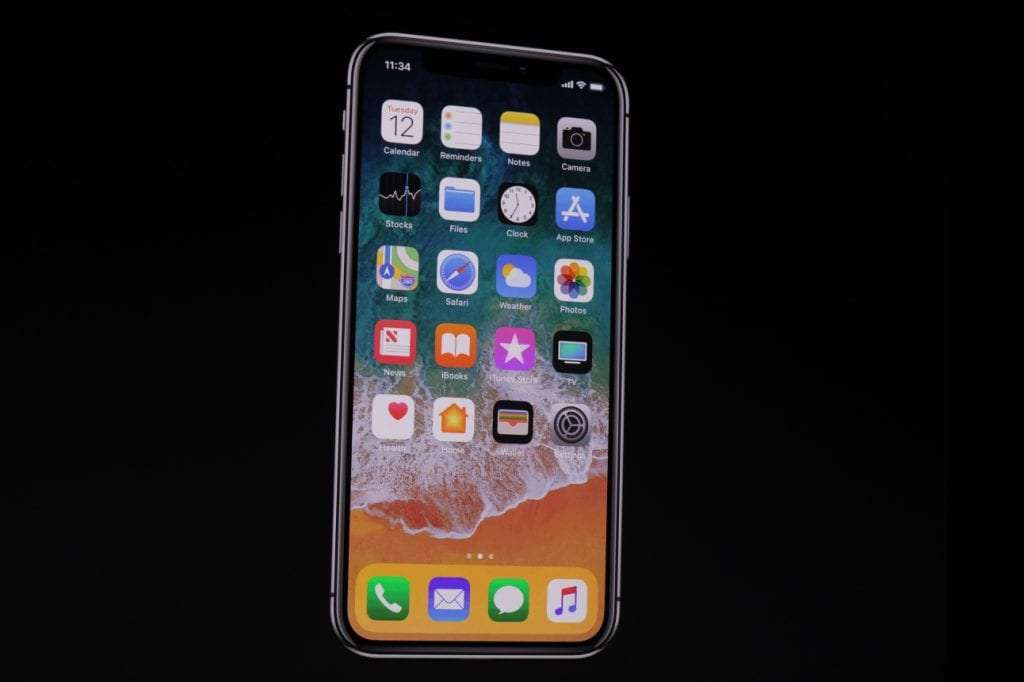 For those of you wondering where the fingerprint sensor has gone, it looks like Apple have replaced it (in the iPhone X model anyway) with their new facial scanning technology, called ‘Face ID’, which will carry out a 3D scan of your face to let you unlock your device. Face ID works with Apple Pay and apps work with Face ID that worked with TouchID. 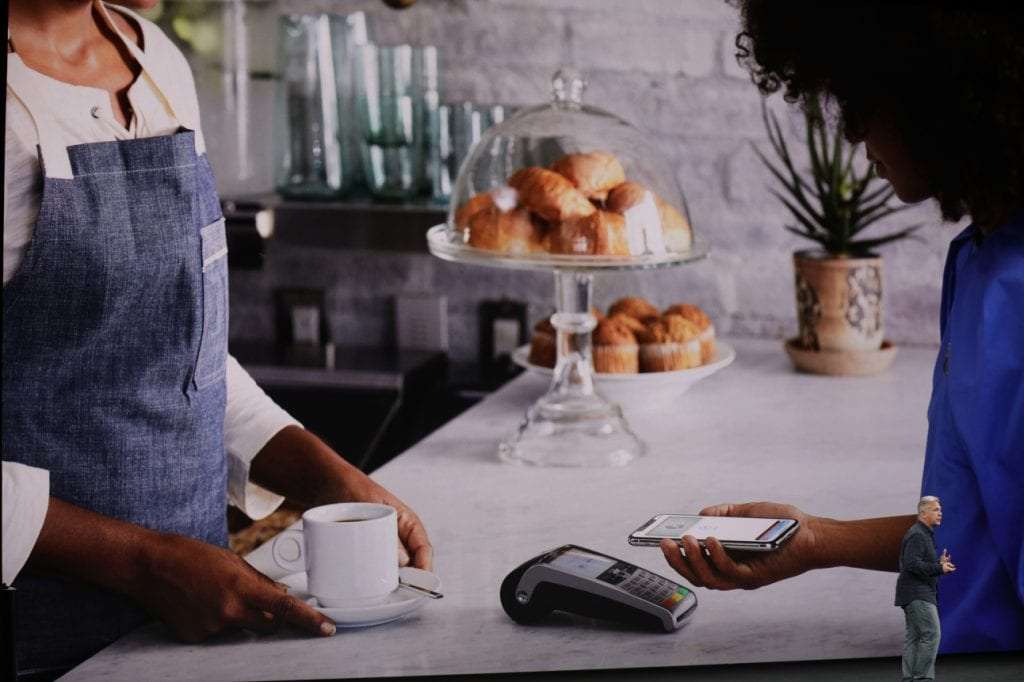 Looking quite similar to the likes of Andy Rubin’s Essential phone or the newly revealed Xiaomi Mi Mix 2. the display is definitely eye-catching and is sure to turn heads. Under the hood, Apple has put the option for either 64GB or 256GB of storage along with 3GB RAM and the new Apple six-core A11 Bionic chip. 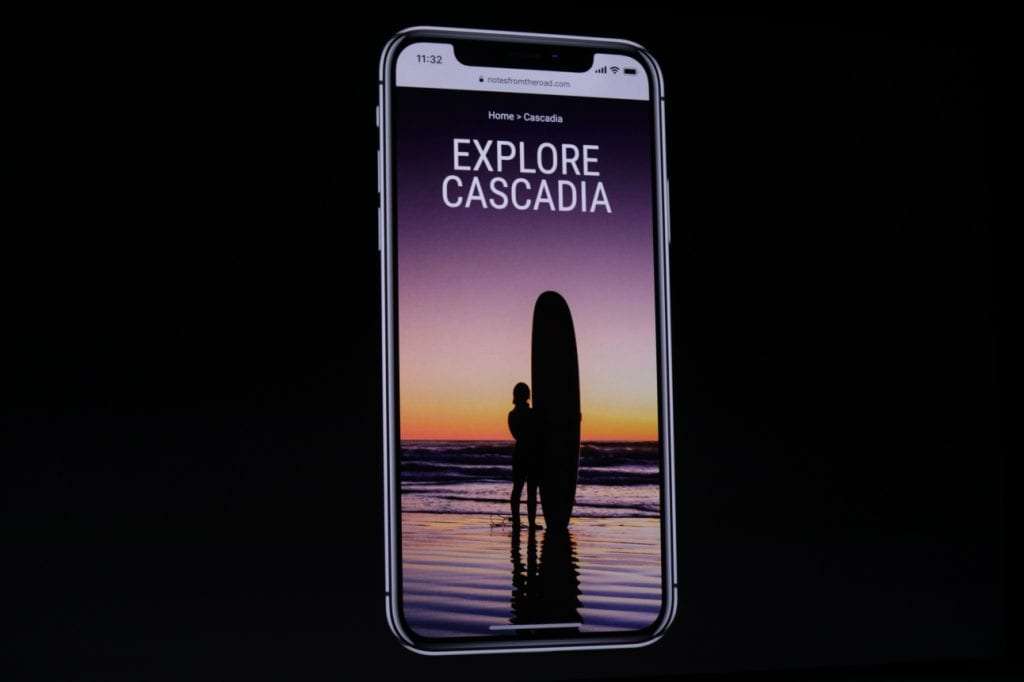 The dual camera on the back has dual OIS and quad-LED tru tone flash with the improved f2.4 aperture on the telephoto lens allowing for better low light capabilities. 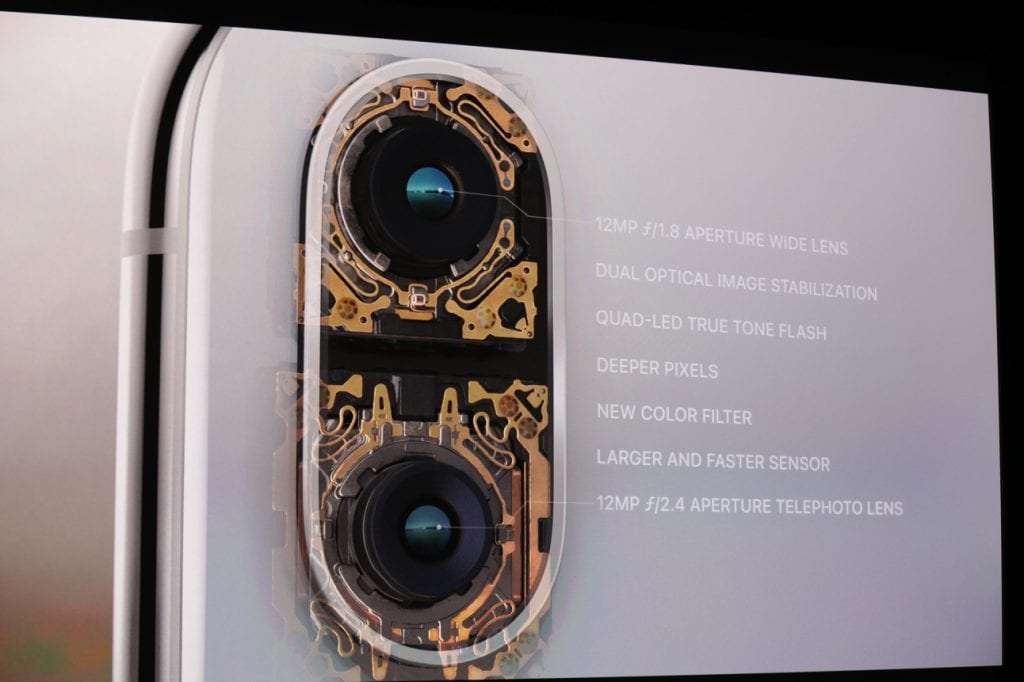 The front facing camera also now supports Portrait Mode like the dual rear camera on the iPhone 7 Plus and the new iPhone 8 Plus so you’ll be able to capture selfies with shallow depth of field effects. 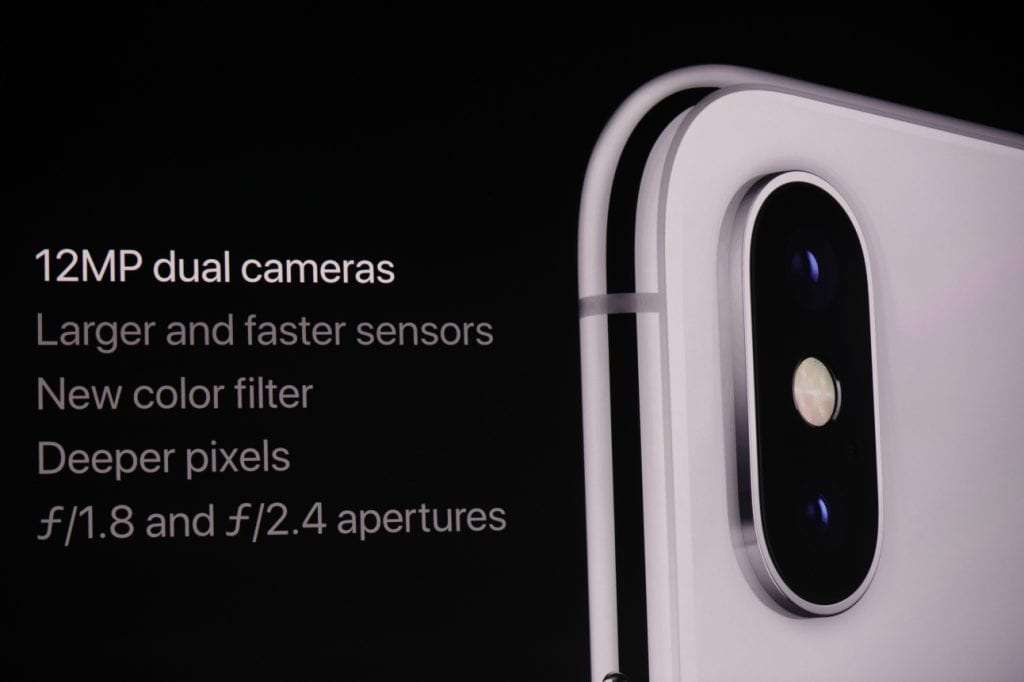 The side unlock button is now the way to physically launch Siri for those of you who aren’t fans of shouting “Hey, Siri” at your phone.

The new iPhone X will be available in Space Grey and Silver and will set you back an eye-watering $999 when it launches on November 3rd. No confirmation on Irish pricing just yet.

For those of us not able to afford the astronomical price of the iPhone X, Apple has also introduced the new iPhone 8 and iPhone 8 Plus which can be seen, as expected, as incremental upgrades to last year’s iPhone 7 and 7 Plus. 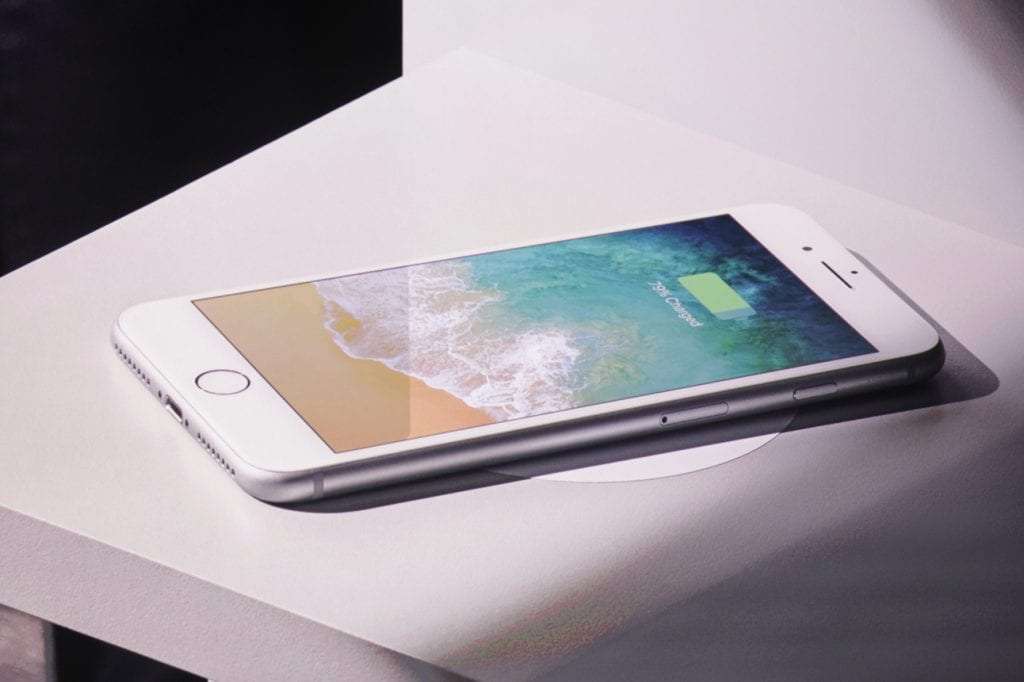 With the new Apple A11 Bionic processor (claimed to be the most powerful and smartest chip ever in a smartphone) and 2GB RAM under the hood, these new handsets are sure to be powerful devices in their own right. The inclusion of Qi wireless charging will also make these new phones appealing to those looking to remove as many cables from their lives as possible. 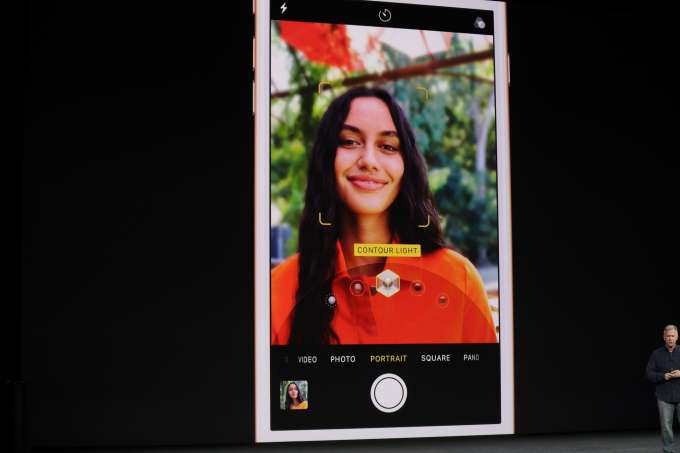 They’ve also upgraded the camera sensor(s) on both phones with the 8 Plus specifically getting upgraded lighting capabilities which lets you tweak the light effects on your subject’s face. They’ve also got the “highest quality video capture ever on a smartphone” with 4K 60FPS capture capability and 1080p 240FPS slo-mo video capture. 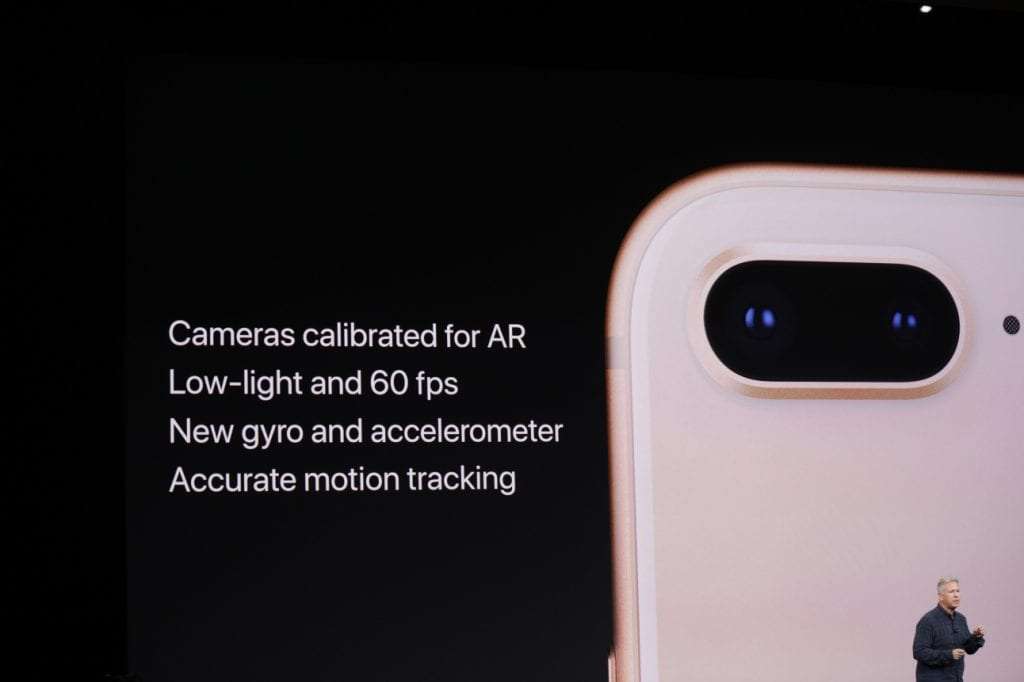 On the augmented reality (AR) front, the cameras have been tweaked and updated to benefit users of AR applications with advanced world tracking capabilities. Directive Games also took to the stage to show off their brand new competitive multiplayer AR game, The Machines, which sees you battle against other players in a highly detailed virtual world which you can walk around to view all angles of the battlefield. 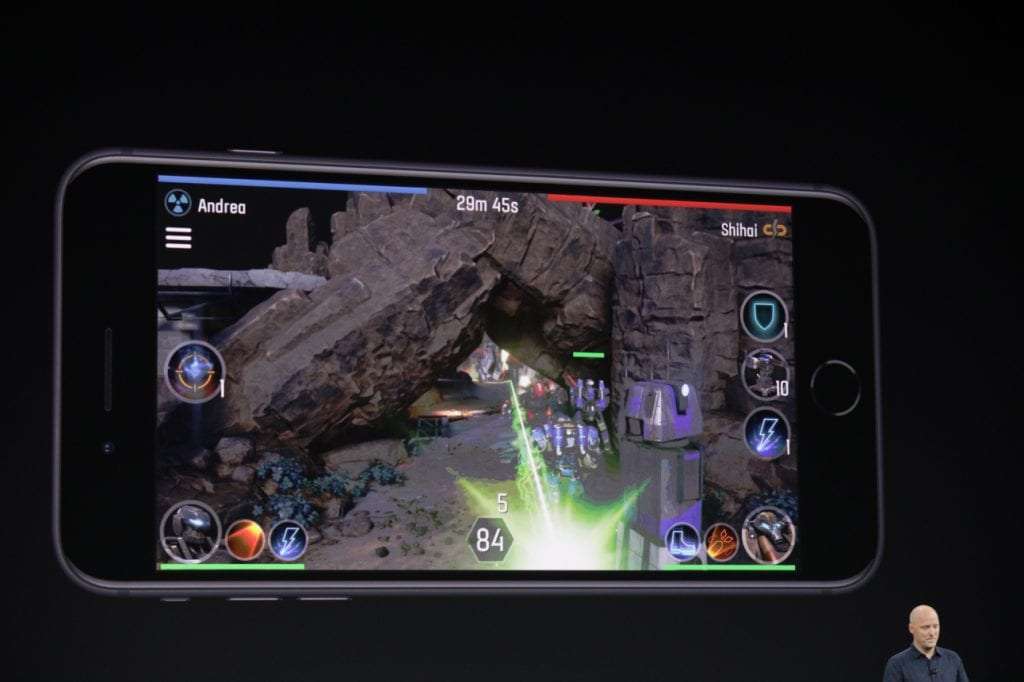 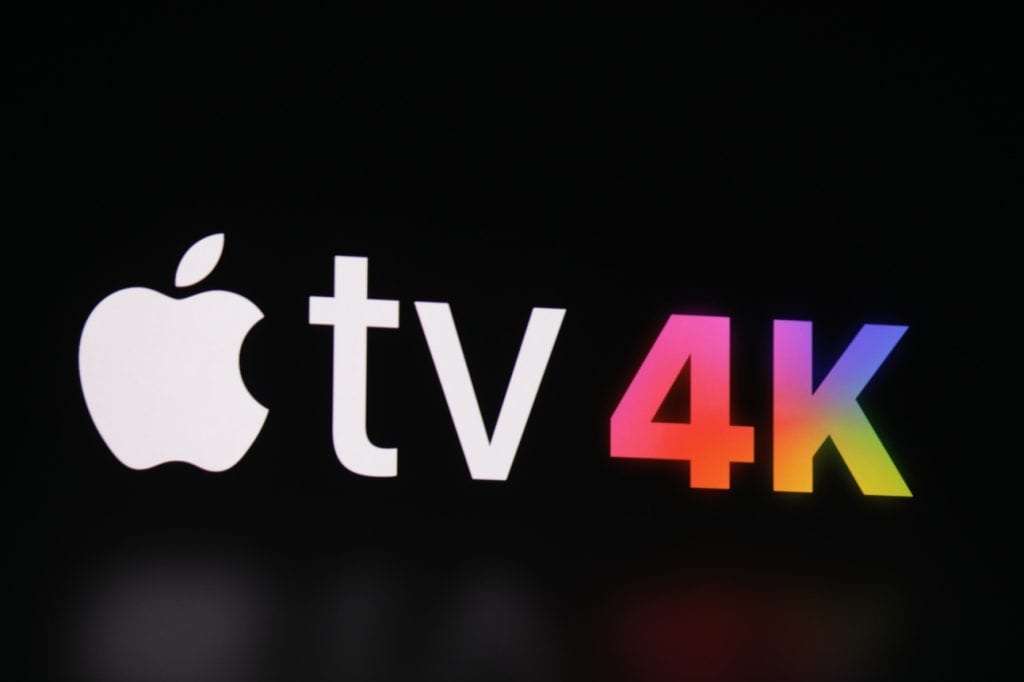 Not to let their albeit reducing space in the sitting room deplete any further, Apple also used today’s event to announce the new Apple TV 4K which, as you may have guessed, will support streaming of 4K HDR content (with support for HDR10 and Dolby Vision) via its video streaming apps such as Netflix, Amazon Prime Video and Apple’s own movies section on iTunes.

Under the hood is the A10X chip and the latest version of TV OS so you can be sure there’ll be no lag when using the new box.

They’ve also signed some nice deals with the major film studios to ensure 4K films will be the same price as the HD versions and anyone who has already purchased the HD version of a 4K film will be upgraded to the higher resolution versions free of charge.

ThatGameCompany (the company behind award-winning titles such as Flower and Journey) also got to make a special appearance to show off their new Apple TV, iPad and iPhone exclusive title, Sky, which looks like a more interactive multiplayer version of Journey. 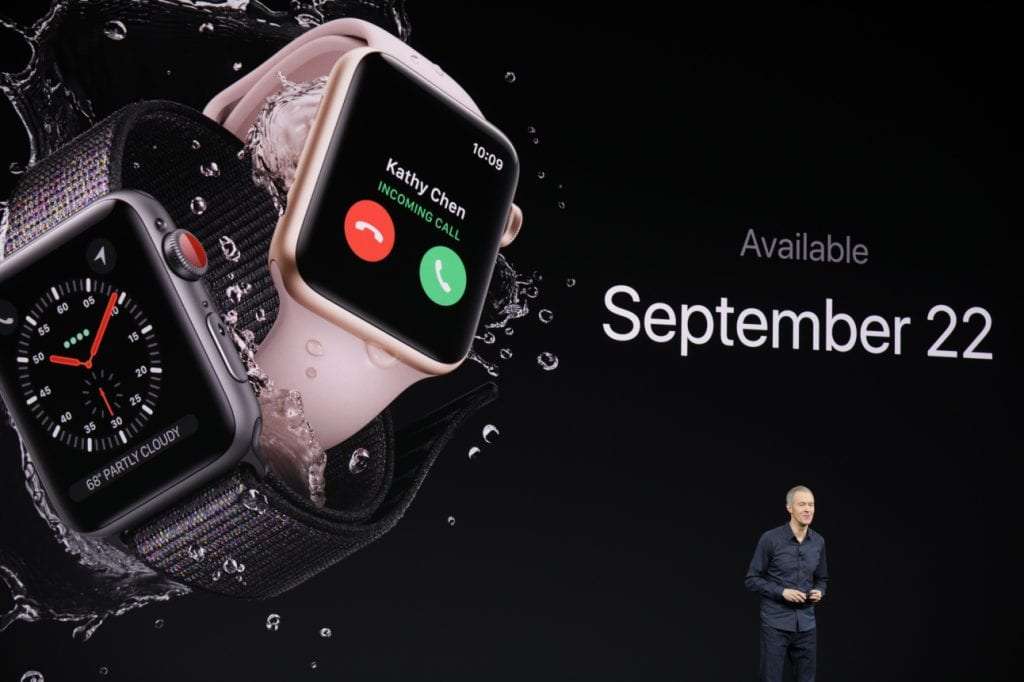 Apple also want to keep their market leading position in the smartwatch category so they announced an upgraded Apple Watch in the form of the Apple Watch Series 3 which has cellular built-in to allow users to use the new watch to make calls etc. without having to depend on a link to their iPhone.

Coming next month, on the new Apple Watch Series 3, you’ll also be able to stream all your music to your AirPods via Apple Music which is a nice little feature. They’ve also included a barometric altimeter to track your altitude and elevation. 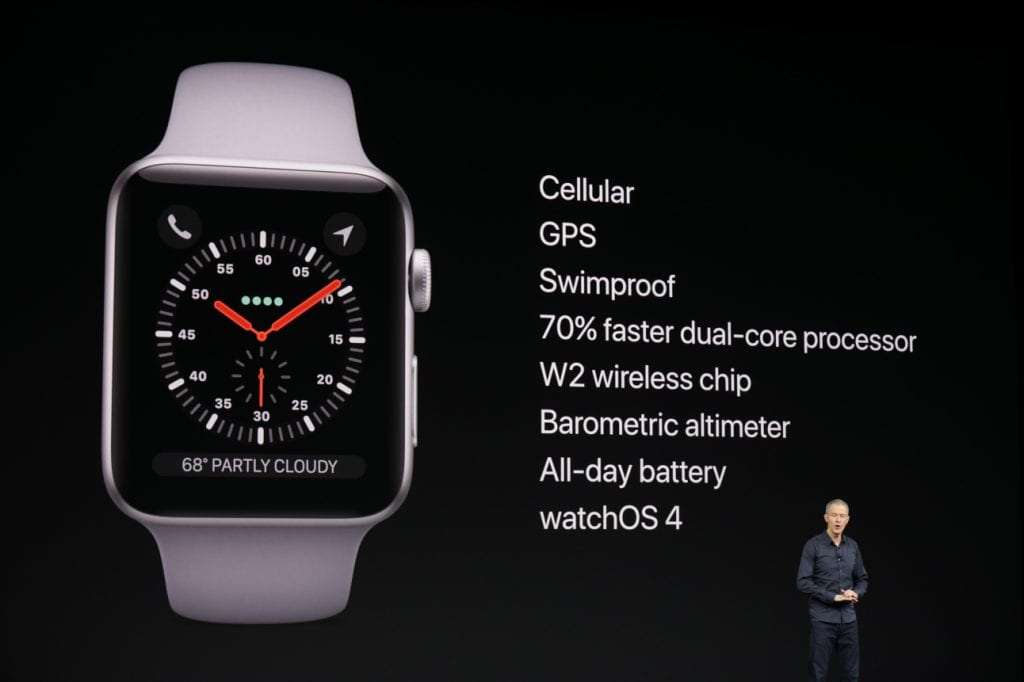 They’re also continuing to focus on the health and fitness features of the watch with enhancements to the heart rate app such as new measurements like your resting and recovery heart rates. The watch will also notify you when it detects an elevated heart-rate when you don’t appear to be active. It will also be able to register atrial fibrillation (AFIB) in conjunction with the new Apple Heart Study and Stanford Medicine.

Apple also showed us a sneak peek of their newest product that launches next year which allows you to wirelessly charge your new iPhone X/8/8 Plus, Apple Watch and AirPods (with their new wireless charging case) all at the same time. Pretty cool. 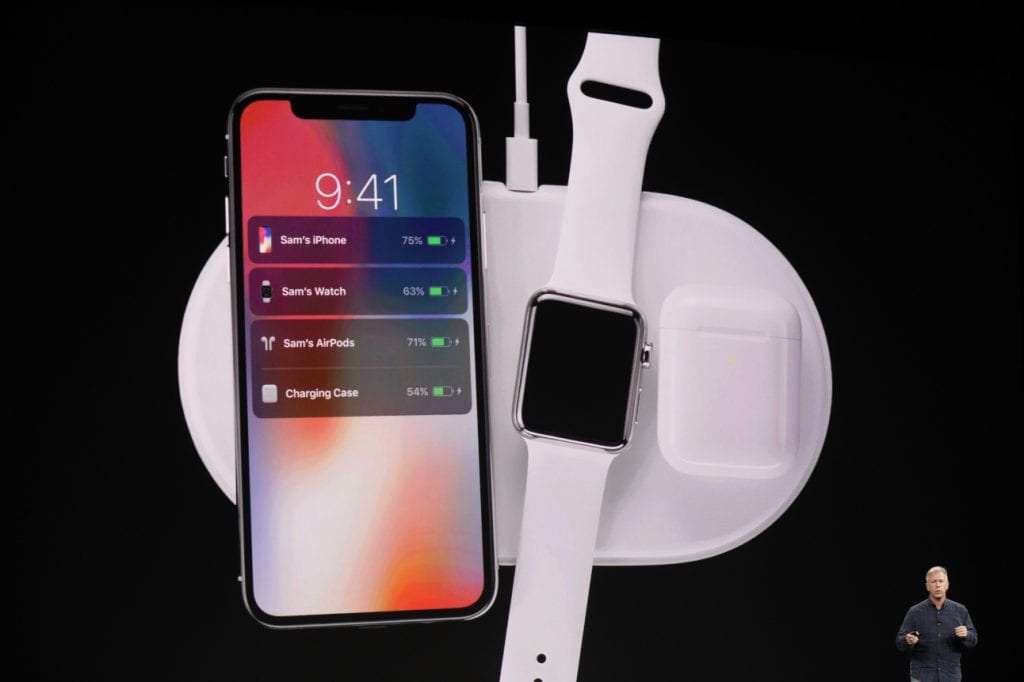