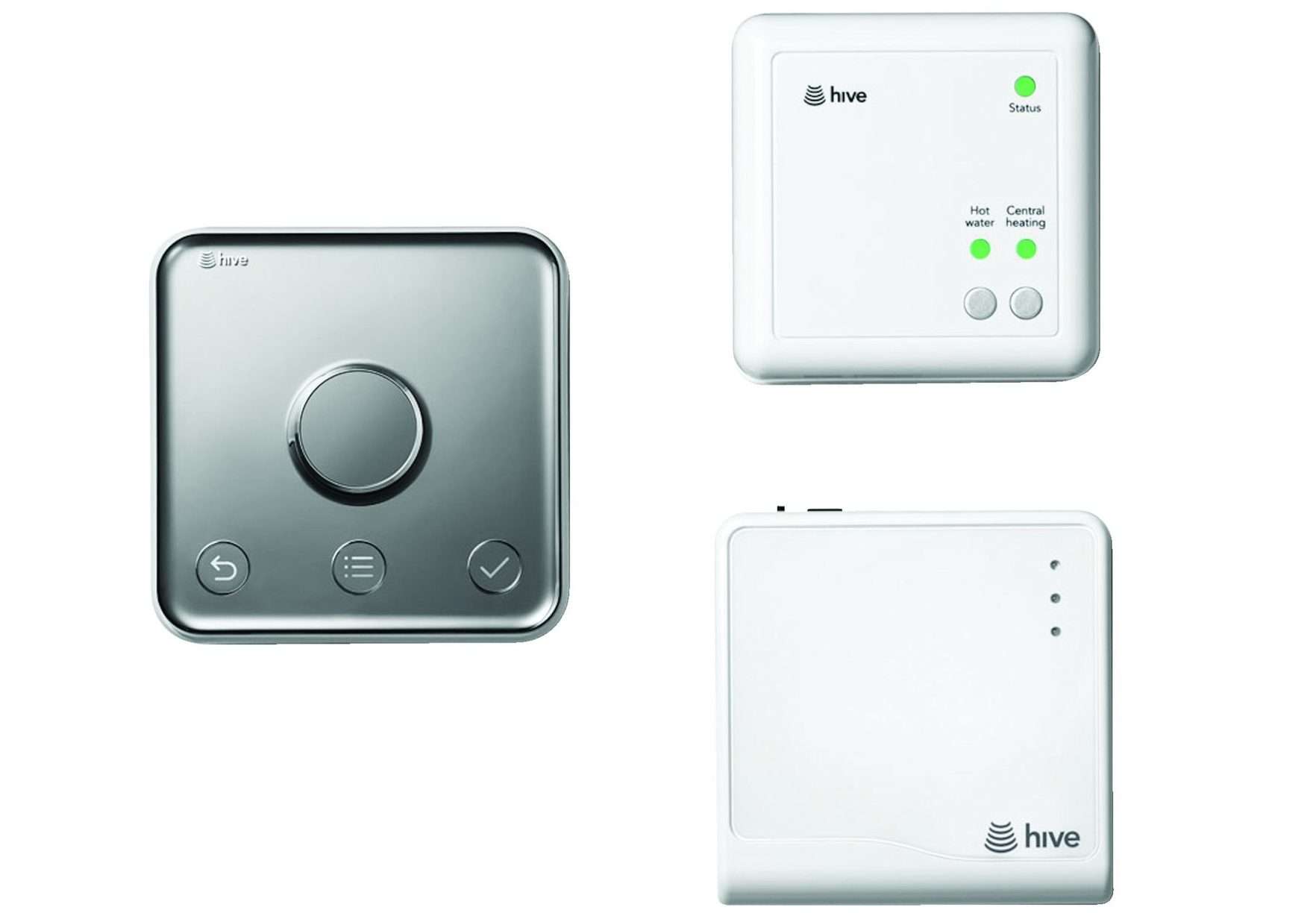 The Hive heating system has been around for a few years and received an upgrade a couple of years ago, and we’re not on Hive 2! The system has expanded a lot beyond the heating system and now covers bulbs, plugs, cameras and various senors.

First off, you should know that the system is super easy to get installed and if you’re concerned about the installation, don’t be, it really couldn’t be easier. It’s was developed by British Gas and is being partnered in Ireland by Bord Gais, but you don’t have to be Bord Gais customer to have the Hive installed. The initial heating system, with the Hive Hub, costs €299 to have installed. I had mine installed on a boiler that’s at least 15 years old in a house that was built in 1950. So if it works on mine, it should work on most peoples, but the good people at Hive will go through that with you before going forward with the installation. 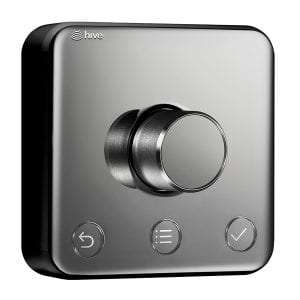 The Hive heating system consists of the thermostat, boiler control and the Hive Hub (more on this below). The boiler control gets installed where your current timer is. I had the old style timer with 2 on/off options. That was it. So I could have the heating come on the morning from 7-8am and in the evening from 6pm to 11pm. As you can imagine, and probably know yourself, that’s pretty inefficient as the heating keeps running even if the house is warm enough. The system supports Heating and Hot water if that is part of your current system but my system is heating only (and that heats the water), so that’s what I had installed. 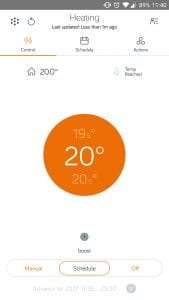 Next you have the thermostat. The Hive thermostat, I have to say, looks great. It’s completely wireless. By that I mean, it runs on batteries, 4 AA to be exact. I’ve found the batteries last for over  year, easily! Being completely wireless is great. It allows me to place the thermostat exactly where I need it. Most of the time it’s half way up my stairs (I found the best space to get a fairly decent reading for the temperature in the house), but it also means, when my new born is in her room, I can move the thermostat in there and make sure her room is kept at the temp it needs to be. You can control pretty much everything from the thermostat (boosting the heating, setting the schedule, adjusting the temperature, etc.) but this can also be done, and is much easier to do, from the app on your phone. Obviously, the thermostat is the part the makes your heating much more efficient. I still have the heating coming on from 6pm to 11pm, but I have it set so when the house gets to 19 degrees, the heating turns off until the temp drops below 19 again! Sounds simple and comes as standard in new builds, but it’s great to add to an older house. 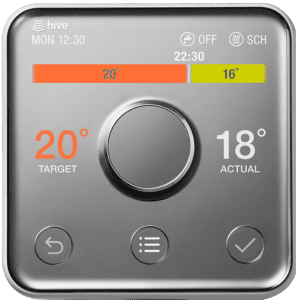 The central part to the entire Hive System is the Hive Hub. This is a little white box, that sits near your modem and is plugged into it. It talks to the rest of the system and makes everything work together and allows you to control the heating, lights and plugs from your phone in or out of the house. It should be noted, this box is used for your phone to talk to the heating, in the house the thermostat talks to the boiler control directly, so if your internet is down, the heating still works. Also, if the battery goes in the Thermostat and you don’t have any, you can still manually turn on at the boiler control box.

The Lights, Sensors and Plugs

Some of the new additions to the Hive system are the Bulbs, Plugs and Sensors (with a Camera coming soon). The whole system is great and works really well together. It’s, again, really simple and straight forward to setup even It might look intimidating from the outside. 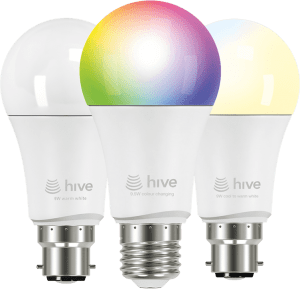 To setup the bulbs, you pop them into the light fixture, turn on the switch at the wall (this should be left on), the bulb will flash. Open the app, you’ll see the bulb, name it and add it. That’s it. Now you can control the on / off and dimming from your app (or your voice, but will touch on that below). The plug is the exact same to setup, plug it in, let if flash, add to the app and done. Plug in your slow cooker / lamp / hair straighter and you can control if from anywhere. 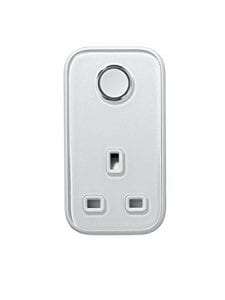 What makes the system really smart are the sensors. There are 2 types of sensors – Motion and Door/Window sensor – and they work in combo with the rest of the system. Again, the are simple to setup and all fully wireless. You pull the tab to get the battery going, it will flash to show that it can see the hub,  then you add it to the app, give it a name and you’re done. Now you get to create actions. For example, in my home, I have a bulb in the landing and I’ve added a motion senor to the top of the stairs, and in the app I created an action so that from 6pm until 8am, if anyone walks up the stairs or is on the landing the light comes on for 3 minutes. I have set the bulb to 5% light so it’s a nice easy light when getting up in the night. 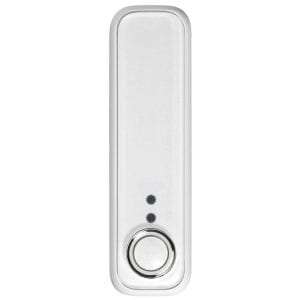 I have to say, since our little one came along 9 weeks ago, it’s been a life saver, when I get up at night to walk with her to help her sleep, the light comes on when I’m on the landing so I can see where I’m going, and the fact the bulb is dim-able is great! It also works great when walking up stairs in the evening to use the bathroom, the light comes on and 3 mins after the last motion was detected, the light automatically turns itself off. 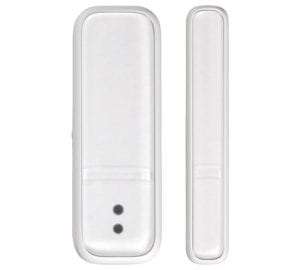 I’ve also setup a door sensor on the front door. It works with the bulb in the halls. So after 6pm (now that it’s dark) when I open the front door the light in the hall comes on automatically! It’s great having a light come on to welcome you home. I’ve also added a bulb in the porch light outside, and I turn this on from my phone before I get out of the car or as I’m walking down the road, so I can see the keyhole which is also very useful. 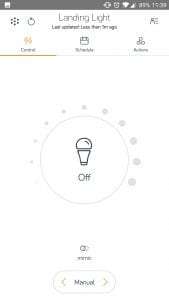 I mentioned above about voice control, this sounds futuristic and like its going to be a pain to setup, but honestly, it very straightforward. All you need is an Amazon Echo (yes, they are not in Ireland yet, but you can get them in from Amazon UK via Parcel Motel). You plug them in, they’ll discover wha’ts in the house and you’re ready to go. As long as you have named the plugs and bulbs, you can tell Alexa (the name of the Amazon Echo assistant) what you want to do.

You can also group the devices. So, for example, If I’m a bit cold, all I have to do is say “Alexa, tell hive to boost the heating” and, the Hive system with boost the heating. Like wise, I can ask Alexa to turn on the Landing light at 50% and she’ll turn it on. When I’m going to bed, I ask Alexa to turn off the downstairs lights and she turns off all the lights down stairs for me and the motion sensor pick up that I’m walking upstairs and I can see where I’m going. If you’re adding smart features to your house, I’d highly recommend adding an Amazon Echo (or 3 – I’ve one in the Sitting Room, Kitchen and Bedroom). 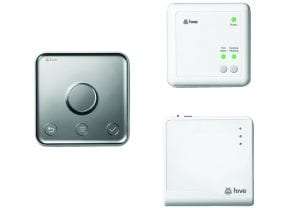 Overall, the Hive system is fantastic and a brilliant addition to any house, especially coming in to the colder, darker months. It turns your home into a much smarter home and a much more efficient home. The heating starts from €299, and you can add bulbs from €25 (for dim-able white up to €49 for a full colour-changing bulb), plugs are €45 and the sensors are €35 each. You don’t need the heating system to get started and can get the Hive Hub on it’s own for €99 and add the bulb, etc.. to it.