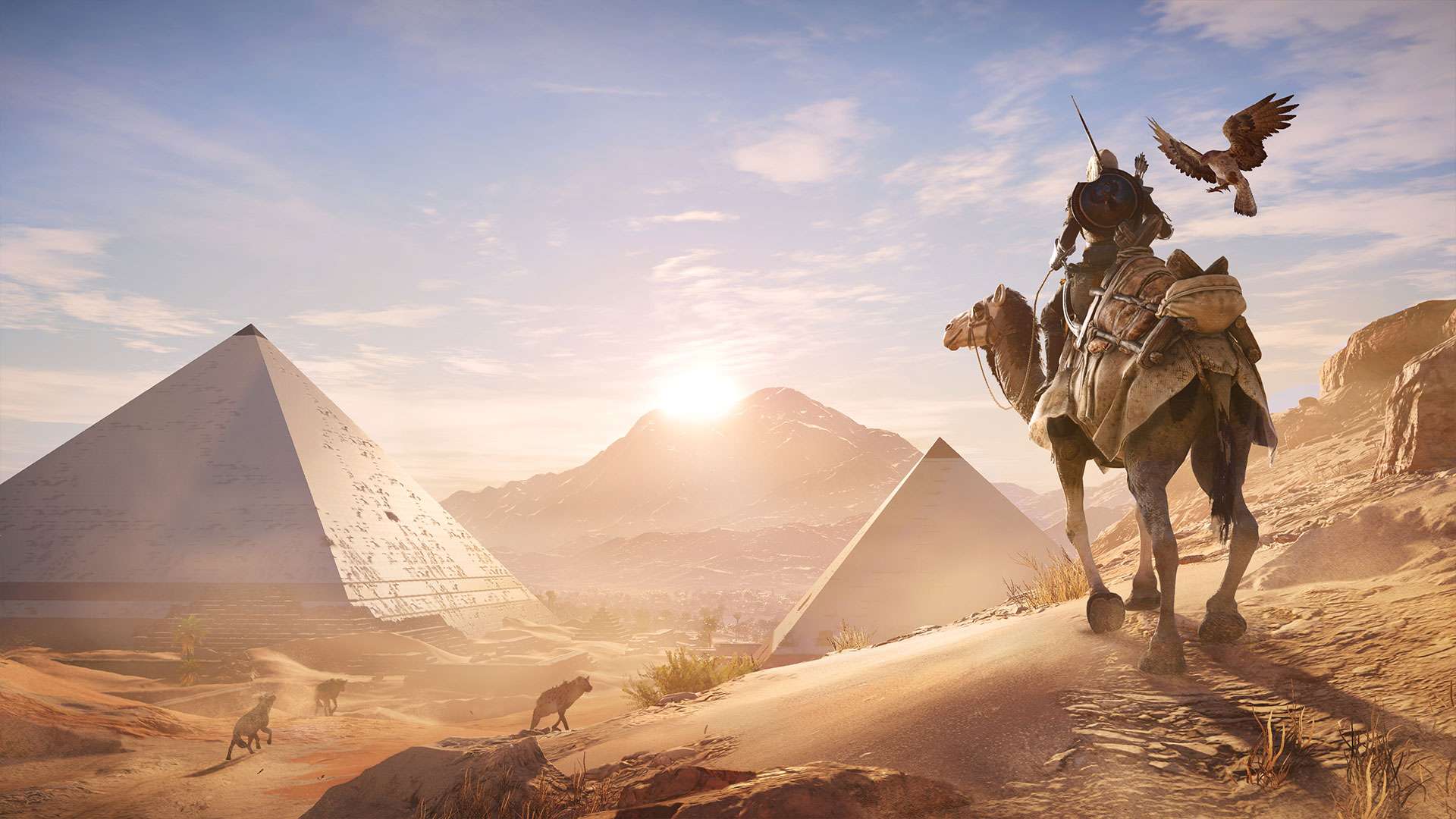 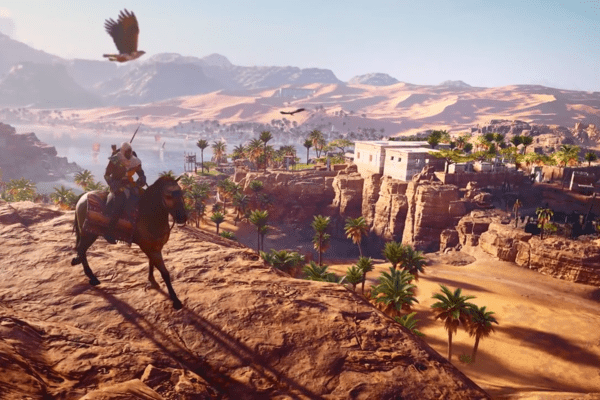 “To Ubisoft’s credit, Bayek actually feels like a real person.”

In Assassins’ Creed Origins, you play as Bayek, an Egyptian Medjay, an old form of law enforcement chosen by the people to protect the Pharaoh. But, by bayek’s own definition, it doesn’t stop there and he feels he has to protect everyone who is in need of help which basically means, the majority of citizens in ancient Egypt.

A new force called the Order of the Ancients is controlling Egypt through Ptolemy XIII’s rule. Ptolemy XIII is the younger brother of Cleopatra and is referred to as ‘the Boy-King’ and it’s Cleopatra and Bayek job to stop his rule with the help of Julius Caesar. 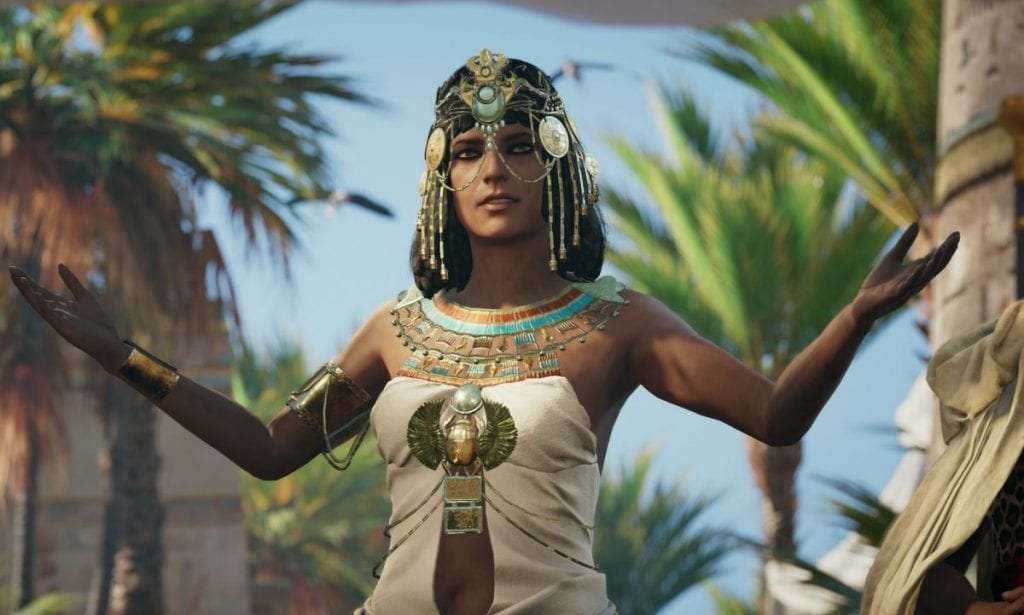 To Ubisoft’s credit, Bayek actually feels like a real person. He’s flawed, has sides to him that aren’t easily definable and he’s someone you grow to care for. His interactions with the locals and main quest characters is believable and well thought out and this adds to the overall immersion and tone of the game.

“When it comes to quest and storyline structure, players are no longer tied to doing one quest at a time.”

In terms of gameplay, Assassin’s Creed Origins can be seen to be quite similar to previous installments in the franchise but there are a few welcome changes. Ubisoft has created an impressively large world and players can now travel between the cities dotted around this world seamlessly. The free running or parkour element of the game has also been refined, allowing for easier movement across structures and terrain. 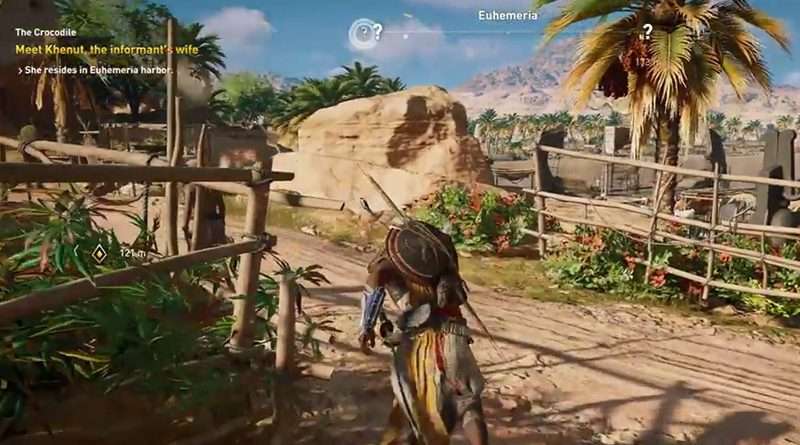 It’s in the combat mechanics though that Assassin’s Creed Origins has received its biggest overhaul. Similar to the likes of The Witcher 3, the game has a much greater focus on dodging your opponents attacks and being tactical about where to strike and when. You must also use proper timing to dodge, block and parry attacks which adds another level of complexity to the gameplay. All of this combined makes fighting multiple enemies much more challenging and incentivises you to plan your approach and attacks more carefully.

Enemies within the game have have individual levels so you know how strong your opponent will be and whether or not you should take them on. As Bayek, you gain experience points by completing various tasks and actions which, in turn, upgrade your over all level and allow you to improve your attacks by upgrading your weapons. All of these new features make the gameplay in Assassin’s Creed Origins more complex but it’s a welcome change as it make for a more enjoyable game overall. 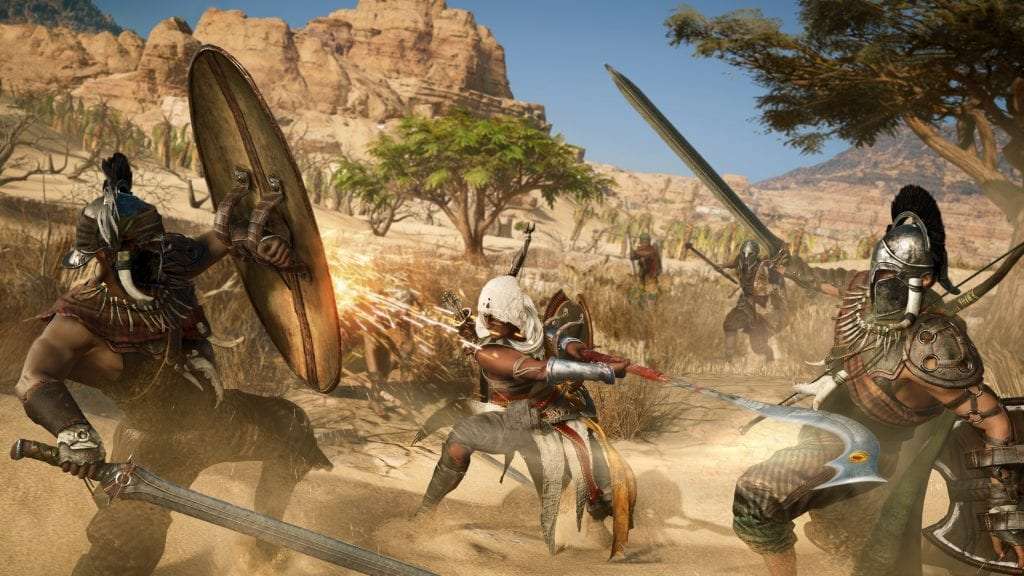 When it comes to quest and storyline structure, players are no longer tied to doing one quest at a time. The game allows players to take on multiple quests at once, go anywhere they want and complete them in whatever order they want which adds a whole new level of freedom.. It also allows the player to explore the world as they see fit and take detours off the main quest storyline whenever they like.

Ubisoft has also included a new gameplay-aiding feature in the form of Senu, Bayek’s all-seeing feathered companion. Seen as the origins of the series’ ‘Eagle Vision’, Senu is an actual eagle that you can call upon to help scan large areas of the map for your next objective or target and is extremely handy when it comes to scoping out a bandit camp or restricted zone in the game. 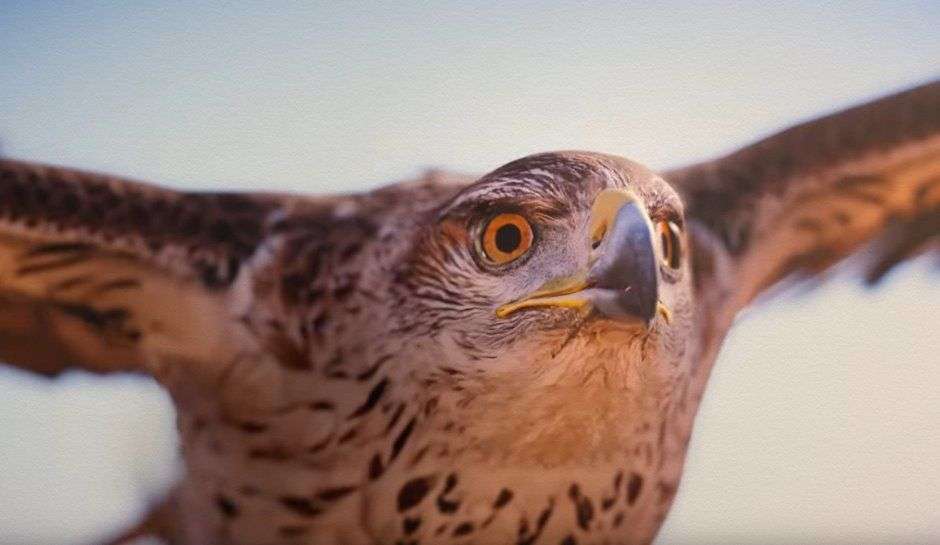 “…Assassin’s Creed Origins is an incredible digital reconstruction of this ancient civilization and their way of life.” 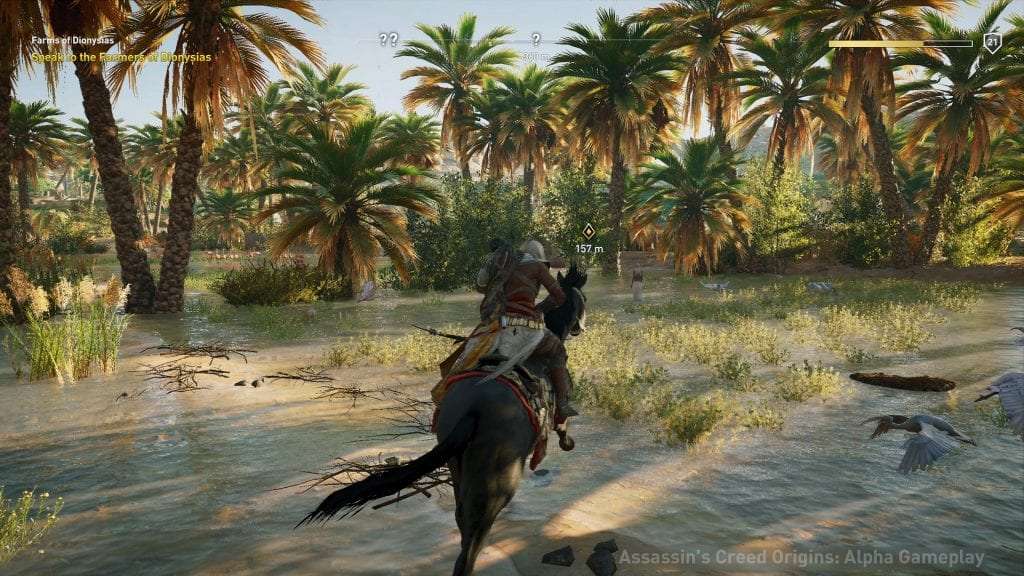 Comprising of multiple cities and settlements, spread across a section of the Sahara Desert, the attention to detail in each and every one of these locations is spectacular. From the lighting to the texture work, everything is fantastic. Admittedly, there are a few bugs and glitches here and there but that’s to be expected from such a vast and complex world and something we imagine Ubisoft will iron out in future updates. 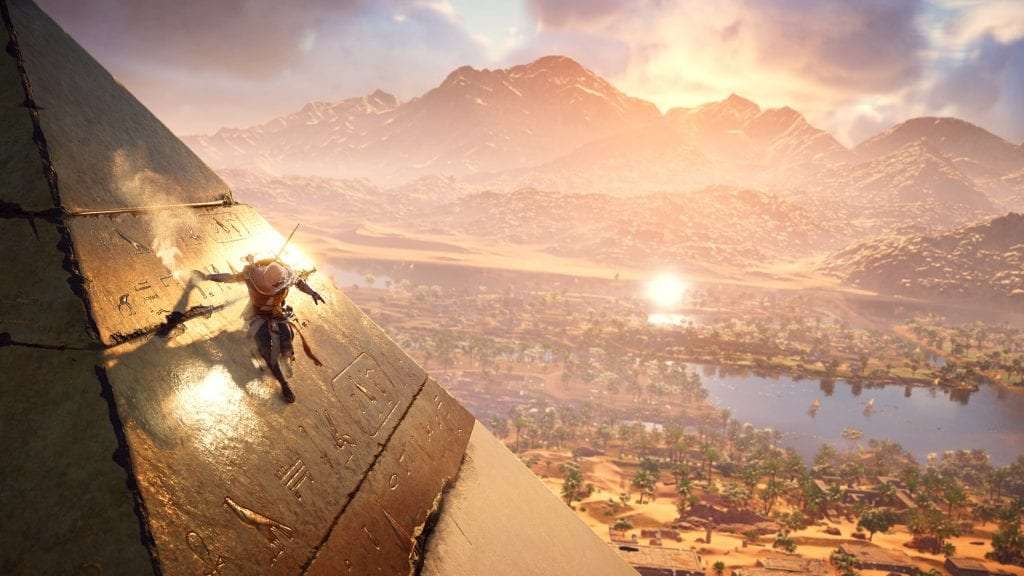 The setting not only looks amazing but is filled with life as well. NPCs have their own daily schedules with sleeping and working patterns built in. All of this extra attention to detail makes the whole experience that much more immersive and believable. 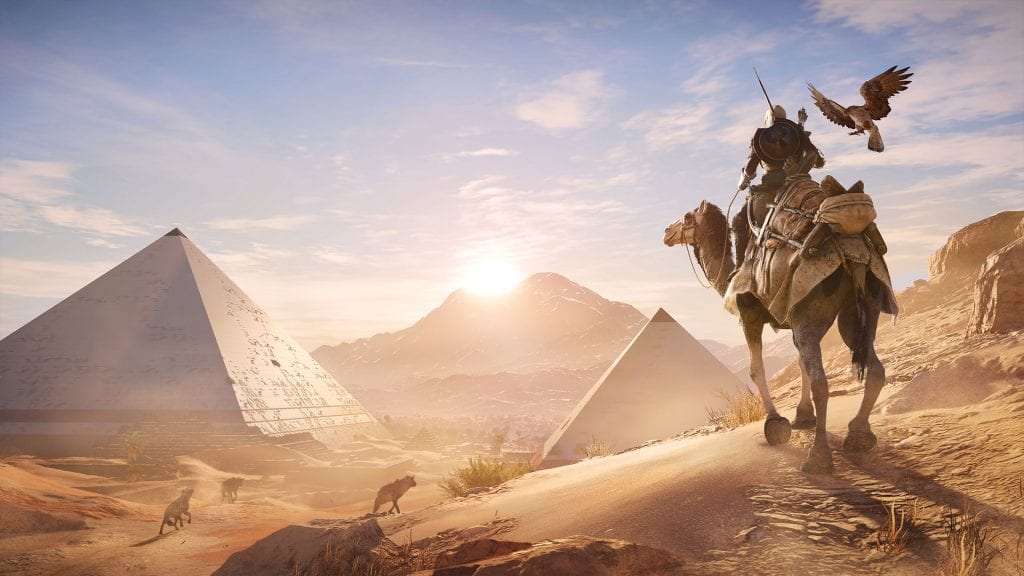 Assasin’s Creed Origins is available now for PS4, Xbox One and PC. It’s also compatible with PS4 Pro and Xbox One X for enhanced resolution and HDR.