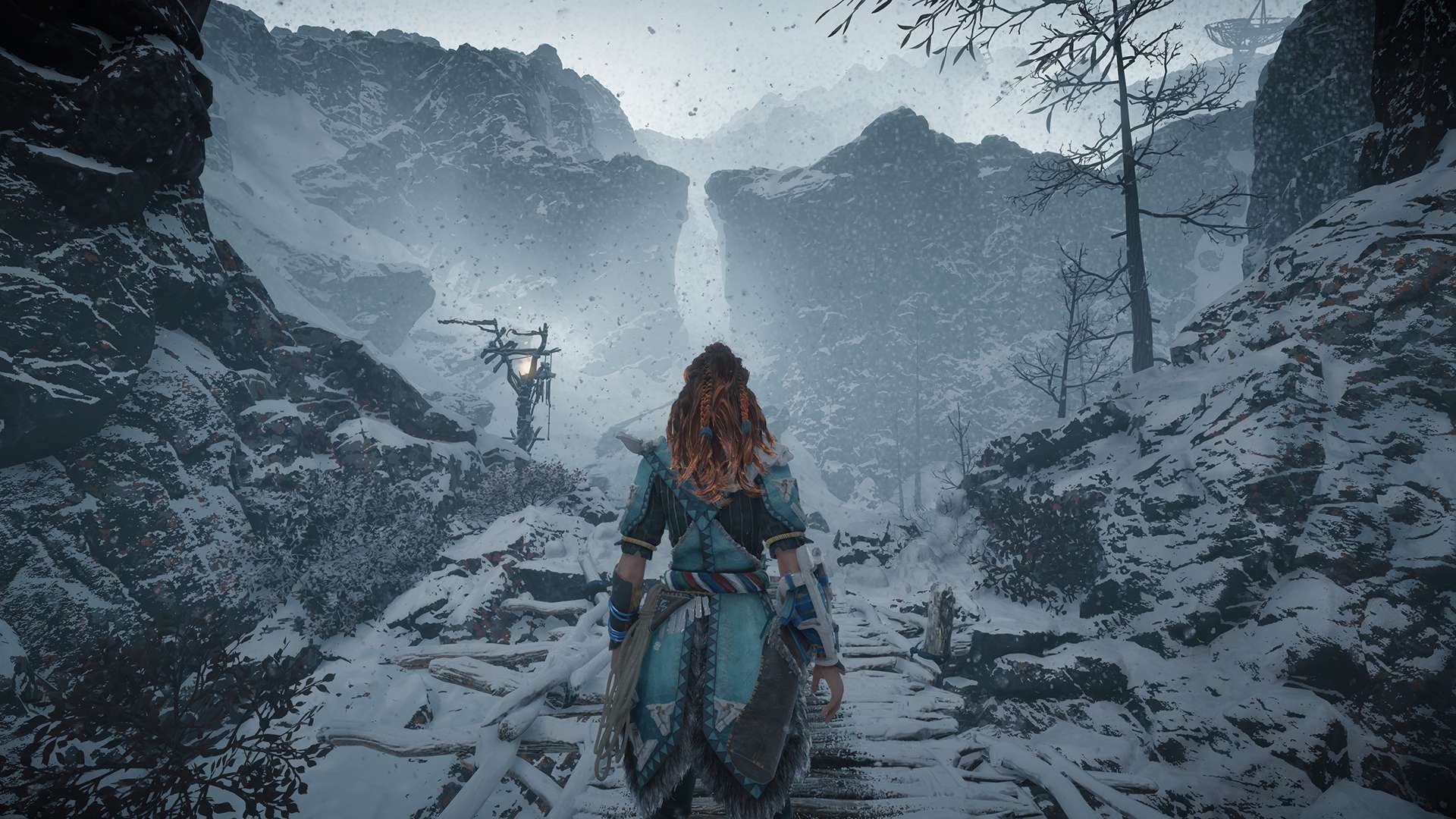 Back in February of this year, Guerilla Games took the world by surprise and released a game that wasn’t connected to their iconic Killzone franchise. That game was Horizon Zero Dawn and it became one of the most critically acclaimed titles of the year so far. Now, 9 months on, Guerrilla Games are beckoning players back to their masterfully crafted world to learn more about the nomadic Banuk tribe and the new enemy threatening their very way of life. Is it time to return to Aloy’s world though? This is our review of Horizon Zero Dawn: The Frozen Wilds. 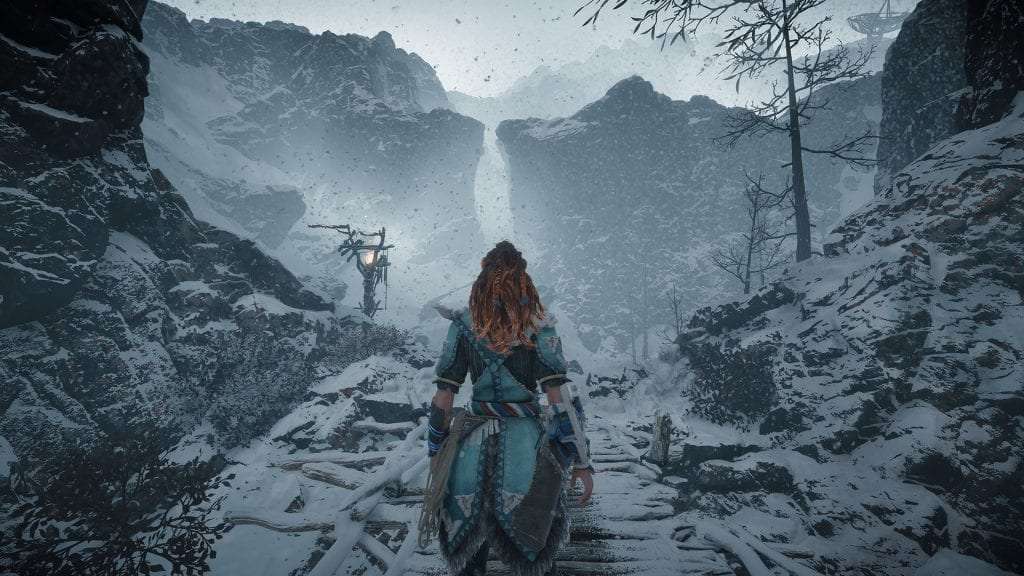 For this first (and only) expansion pack to launch for Horizon Zero Dawn, you are introduced to a brand new area of the map called ‘The Cut.’ As you can probably tell from the images and videos of this DLC, it’s an extremely cold and dangerous environment with almost continuous snowfall. It’s here that the expansion’s new tribe call home with the Banuk setting up camp all across this ice-covered expanse. 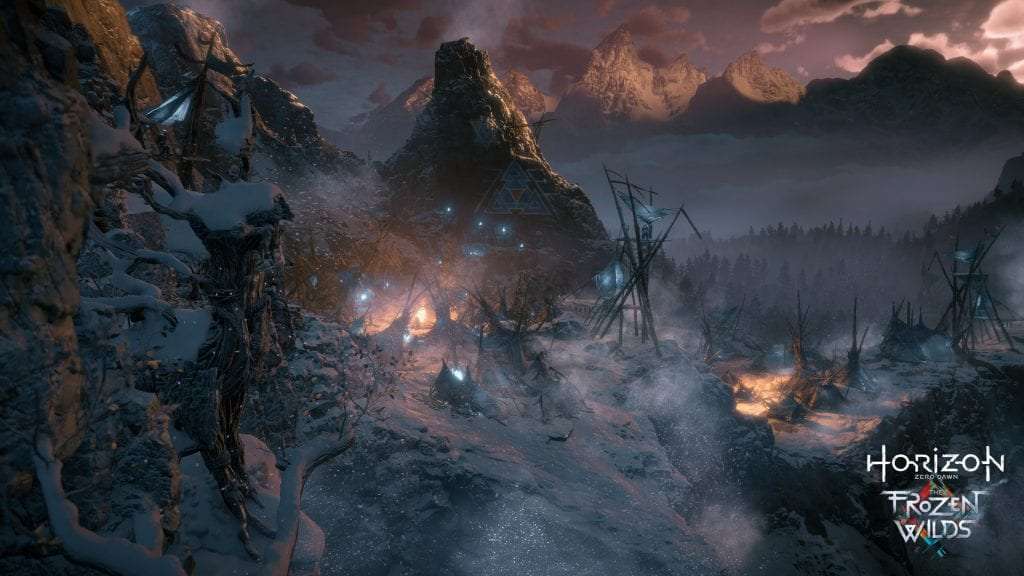 Appearances can be deceiving as, at first glance, it seems that there is peace between man and machine but it doesn’t take long for you to learn that this isn’t the case. One of the new landmarks on the horizon (ahem) is the ‘Thunder Drum’ which, to you and I, is obviously an active volcano that is spewing out new and more powerful machines and it’s up to you to find out what exactly is happening. 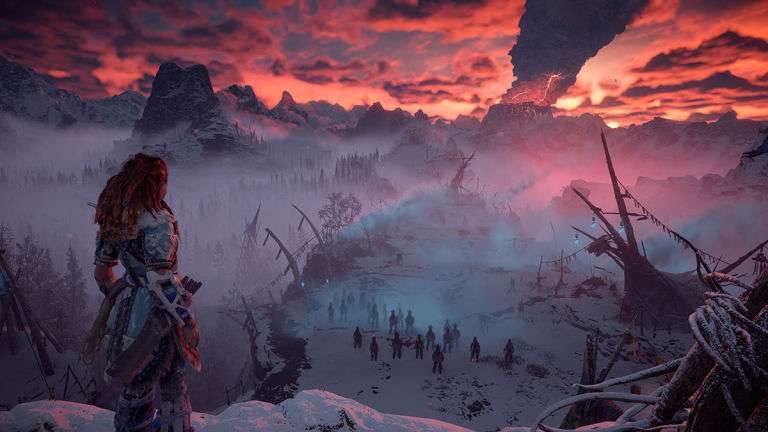 Narratively, this is more than enough to drive this mini-adventure forward and Guerrilla Games also included much more info on the world’s overall lore. They did, however, make sure not to answer all of the questions I had from the first game as the inevitable sequel will need some secrets to entice players back.

With the introduction of new enemies, in the form of the bear-like Frost Claw or the deadly Scorchers, Aloy has also gained access to new weapons. These include new elemental staffs and even more impressive weapons such as the Stormslinger, Icerail and Forgefire which fire our their respective elements to take down any man or machine that gets in your way. Admittedly, these new weapons reminded me of the more bombastic, action-packed FPS offerings we see all the time on the market and it’s a path I hope Guerrilla Games doesn’t continue to go down as it would take away from the game’s overall uniqueness. 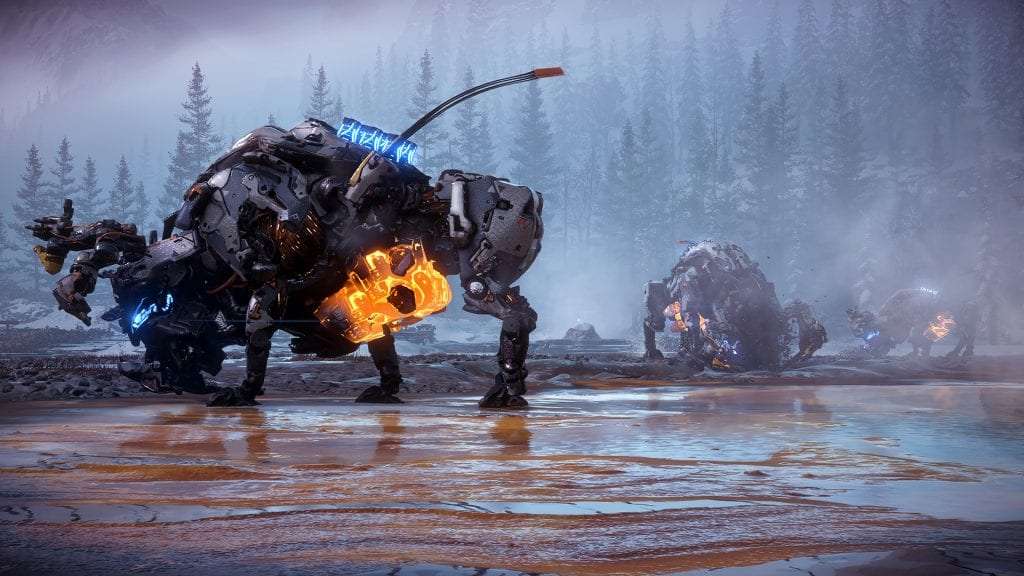 You’re also introduced to new armour types which you can get by either purchasing them from traders or completing various side-missions. Finally, there’s also the introduction of a new form of currency called Bluegleam which can be traded for these new and more powerful weapons and armour.

Fans of ‘skill-ing up’ will also be happy to know that Guerrilla has also introduced a brand new skill tree called ‘The Traveler’ which allows you to unlock abilities such as new ways to attack from your mount and expanding your resource stash. It’s nice to see these new skills added to the game but I did find that they didn’t really add to the overall gameplay in the same way the original skill trees did. 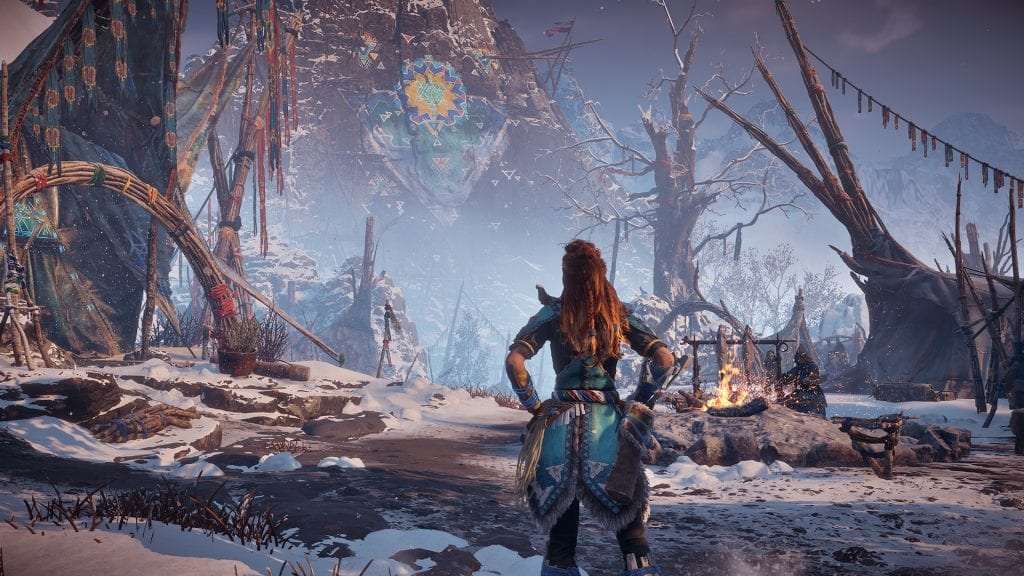 As I previously mentioned, there are new and formidable machines to tackle but there’s also the new snake-like control towers which can not only knock you off your mount with their purple ‘daemonic’ blast, but they can also restore the surrounding machines you’re are battling whilst you try and override this new foe.

Guerrilla Games has done a great job of creating new and unique enemies, armour and weapons to make the expansion fresh and interesting whilst still staying true to what made the original game so special.

Anyone who has played the original Horizon game will know just how draw-droppingly gorgeous it was and, with the Frozen Wilds, Guerrilla Games has outdone themselves again. Everything from the intricately detailed snow-covered mountains to the intensely colourful pigment pools look stunning in the new frozen wasteland and re-inforces the fact the Horizon Zero Dawn (and its new expansion pack) is still one of the best looking games of this generation. 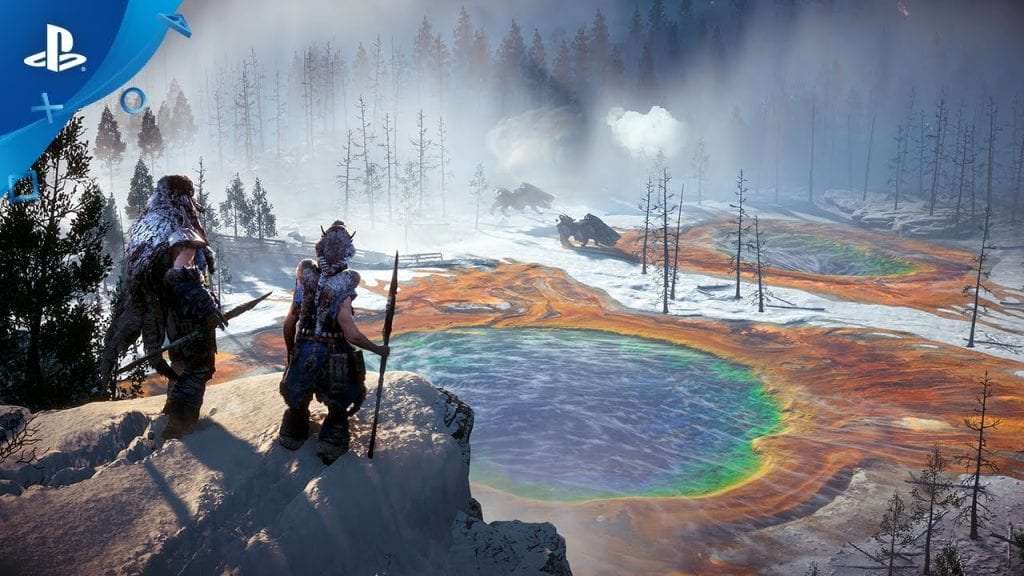 The attention to detail is also incredible with little things like how Aloy and her enemies deform the snow in a realistic and believable way and the frequent snowstorms with their millions upon millions of snowflakes. The Frozen Wilds looks so real at points, you can almost feel a chill from the TV as another snowstorm approaches! 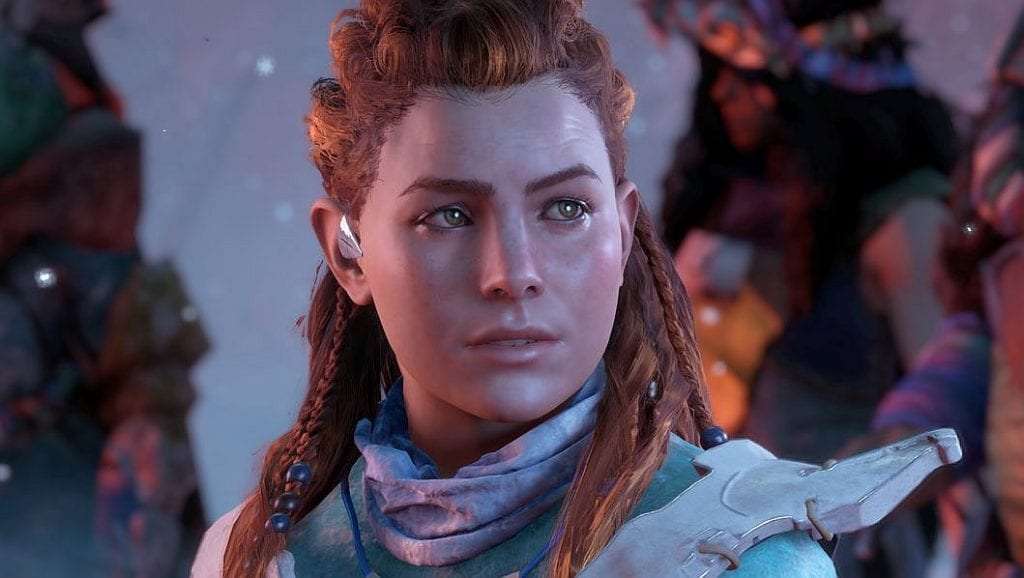 I, for one, had no problem returning to the fantastic world Guerrilla Games has created. Horizon Zero Dawn: The Frozen Wilds is a beautifully crafted addition to an already beautifully crafted game and, even if all the questions I had weren’t answered, I still enjoyed my time in The Cut. Learning about the Banuk, their new deadly enemies and their way of life was great fun and it’s a shame to think this is the only DLC that will be launching for this game.

For anyone who enjoyed the original game, The Frozen Wilds expansion pack is a no-brainer.