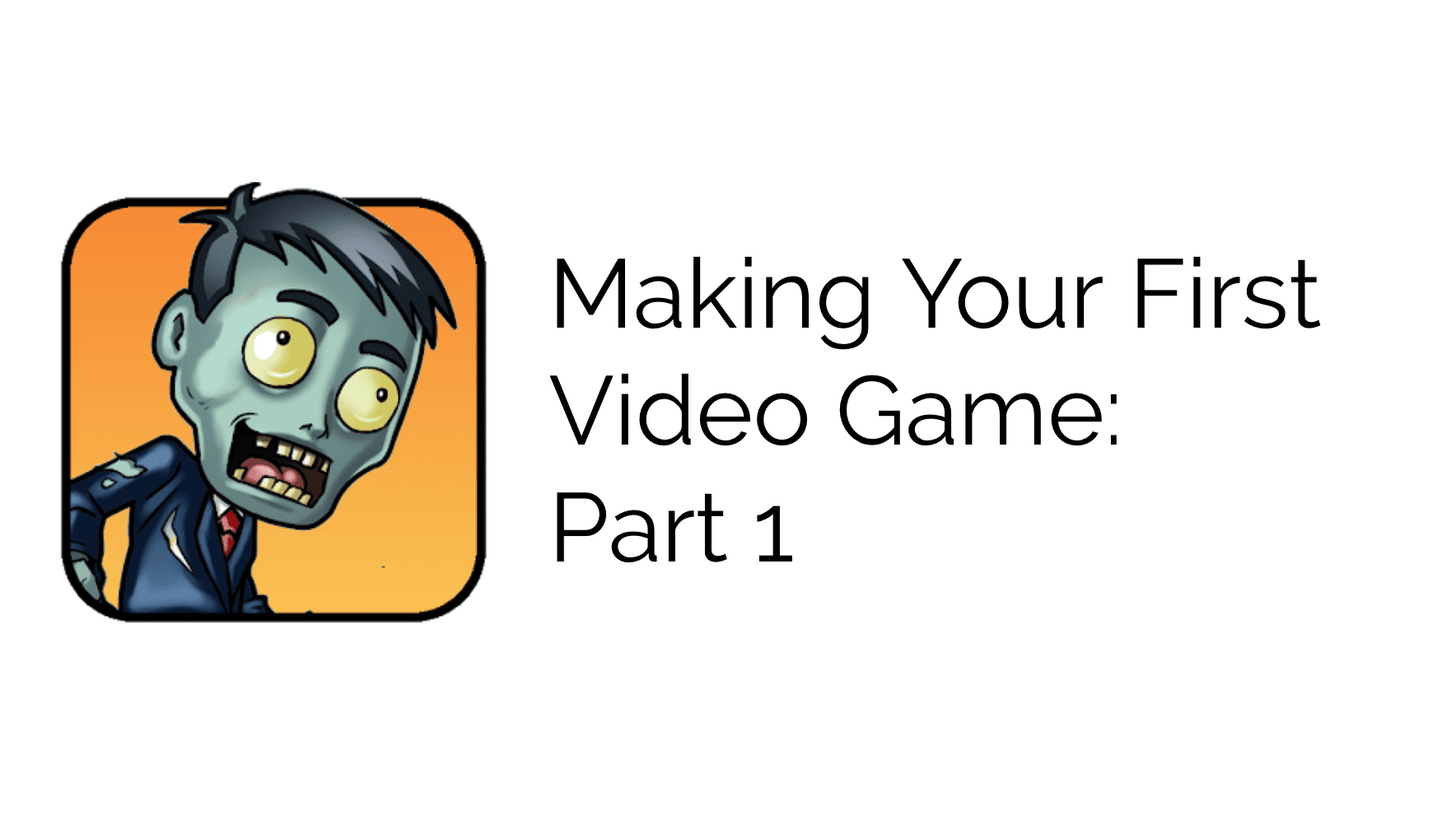 So, time for something a bit different! Friend of the site Paul Froggatt went ahead and made an actual game – with zero experience! Now, we love to support our own so do take a minute to download the game and check it out and leave a review, sure it’s free! – Google Play Link. Zombles is an Android puzzle platformer featuring a cast of shambling undead as they try to turn the last remaining survivors and reclaim the planet from humanity’s grasp. Inspired by genre classics like Lemmings or The Lost Vikings. Paul’s written about his experience making the game, from zero experience to publishing his first game. Now, over to Paul!

As a fledgling Irish developer 9 months ago, with absolutely zero experience and about €150 to spend I started making my first game. Now to stress how little experience I had, 9 months ago I could barely program a toaster. I still can’t but if you asked me to make you an in-game toaster then I can now!

As a lifelong gamer, I wanted to peak behind the curtain and actually start making my own games. Now, you’ve probably had that thought in your head once and you’re absolutely right, it’s utterly daunting. Throw in gobbledygook-looking code, unreachable expectations and literally thousands of devices that someone could be using with access to millions of apps then I knew my first game wasn’t going to set the world on fire. That being said, with a little determination and a strict covenant not to play Xbox before 6pm, it is doable. In my case I aimed to commit 1-2 days a week for the minimum of one year to see if I could learn new skills, publish a small mobile game or two, and gain enough experience to decide if it’s something I wanted to continue longer-term. Enter, Zombles. 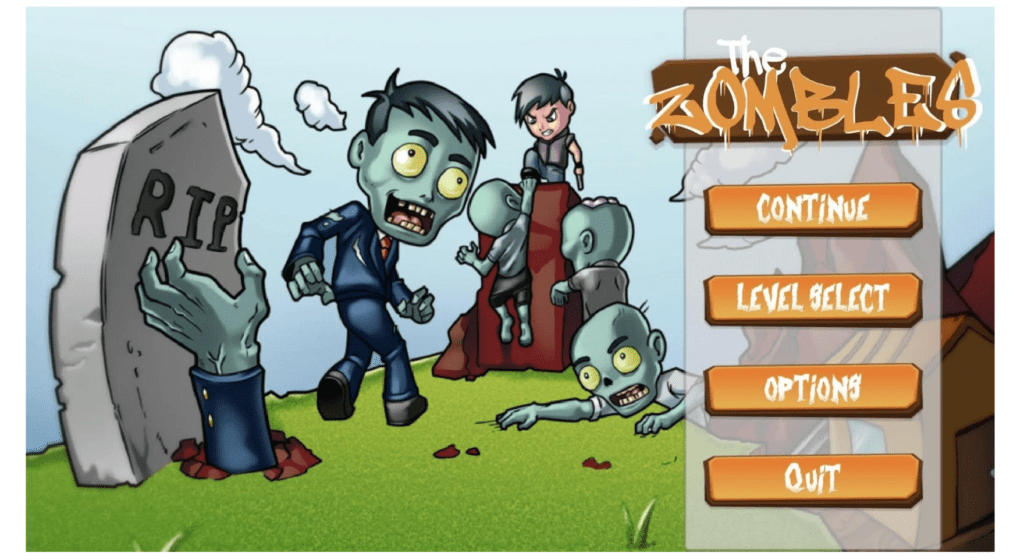 Here’s how it went down.

Luckily, there’s a wealth of information available for people who want to make games but have no idea where to start. All games are built with game engines, so the first important choice was do decide on an engine. The internet flame wars on the various engines are as passionate as the ever-present PlayStation vs Xbox vs Switch debate, but for my purposes Unity was an obvious choice. 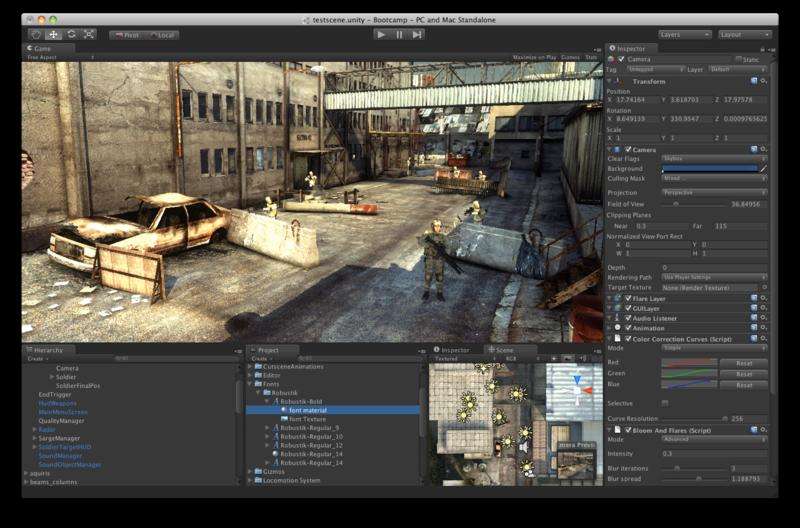 The Unity Editor. Game devs see a lot of this screen.

Unity is free, flexible enough to use for simple little games as well as more advanced titles and home to a host of tutorials, walkthroughs, and an army of other aspiring developers trying to learn the ropes. Other options like Unreal (which was very similar, but with seemingly more focus on advanced use cases and less support for newbies) and GameMaker Studio (apparently easier to learn but not as flexible) are also worth considering, and Instabug has a great post about lots of other alternatives.

Engines provide the framework in which games are made, but are severely limited without the ability to write code. Much like learning a foreign language, there are various ways to learn coding on a budget. Traditional textbooks like Learning C# Programming with Unity 3D by Alex Okita offer a good reference point, but can be quite dry relative to more interactive online tutorials like the Learn To Code By Making Games course on Udemy. Offering over 40 hours of progressively more advanced workshop videos, I can’t recommend it enough. There are similar courses available, for example Devslopes’ Unity Development Academy or Master Unity by Awesome Tuts (don’t ask me why he’s called that) – they cover similar content and if you have time it’s worth repeating the basics to help it stick. Unity also has a library of tutorials, many of which are free.

Budget tip #1 – You generally don’t need to pay more than €15 for a game dev course on Udemy. For example the Learn To Code course is priced at €195, but sales are so frequent it’s rare to find it with any less than 90% off. If you see an expensive course you can just bookmark it and wait for the price to come down.

If you are looking for formal qualifications in the industry, Dublin does host a number of more traditional educational institutions teaching game development. Pulse College for example, offers both 6-week introductory evening courses (one of which I have since attended) as well as full-time diplomas. Griffith College has computing and game development degrees (with regular Game-Jams too). It’s also worth checking out DIT or Trinity College’s offerings, GameDevelopers.ie provides a list with even more options.

Budget tip #2 – Registering with certified educational institutions means you can apply for (free) student licenses for specialist software. AutoDesk’s 3DS Max 3D modelling tool for example, normally has an eye-watering €1,936 per year price tag. You can also use open source alternatives of popular programs (e.g. GIMP instead of Adobe Photoshop, Blender instead of 3DS Max) that have a lot of the same functionality without the cost.

For most practical purposes, the Udemy courses do a great job of walking through the basics of coding, as well as navigating the Unity interface and other elements of game development like physics and animation. Illegible techno-babble soon becomes meaningful code with recognisable patterns and formatting. Again, like learning a language, the rules of coding are relatively straightforward to pick up and the challenge quickly becomes expanding your vocabulary of different functions and features.

As a quick example, here’s a small snippet of code with the translation into normal English beside it. This code controls the cascading story text at the start of the game – displaying the content gradually rather than all at once. Even with a very basic understanding of programming, the below left soon starts to read like the below right. 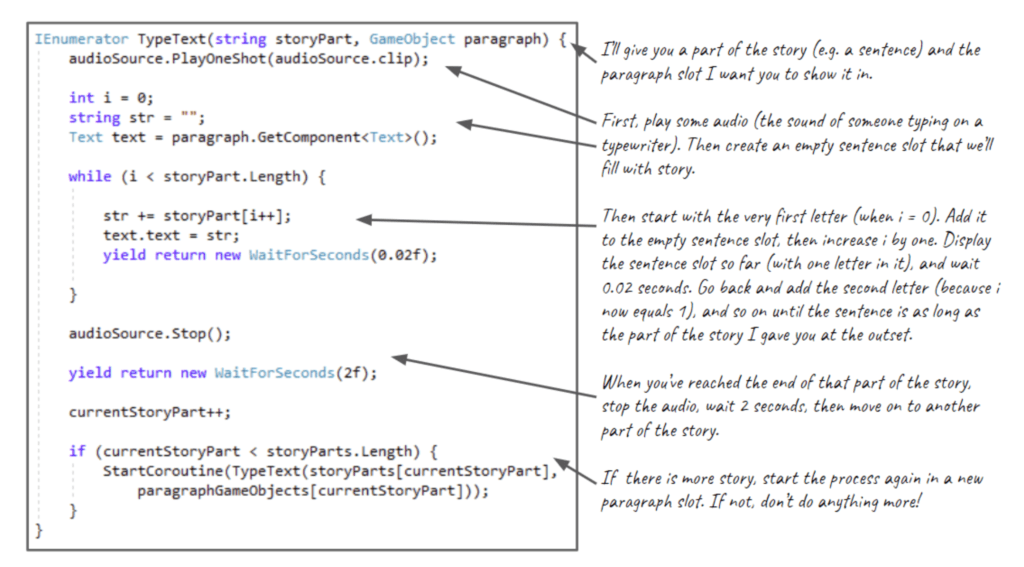 Every course will also mention how important it is to get familiar with the Unity documentation. It’s a great source of detail on most conceivable features.

Having built a number of small games via the online tutorials, the next challenge was to step out into the great unknown and actually start building a brand new game.

Budget tip #3 – Some developers/studios may look in to funding possibilities at this point (in my case as I was only working on the game part-time I didn’t dig too much into financing), though from my discussions with other Irish developers the options do seem quite limited. There is a European grant offering some funding for story-based games, but this requires you to already have a limited company with experience releasing a prior game. IMIRT (the Irish game developers association) also lists a few alternatives available in Ireland. If you’re looking to invest in a new studio and give up full-time employment the Irish SURE scheme can also provide some pretty substantial tax refunds. I’ve not used this for game development but do have positive experience with it for previous companies.

For a first-time developer, everyone will give you the same advice and it’s worth repeating – keep the scope small. Being a fan of the original Lemmings, I thought a similar puzzle-platformer could be fun – remove the complexity of destructible terrain, introduce some new mechanics/themes, and release on mobile devices. In hindsight even this simple concept proved to be larger in scale than anticipated. Part 2 details the game’s development, including some hard-learned lessons on game design, bugs, and playtesting.… continues in Part 2 – From Prototype To Publishing.