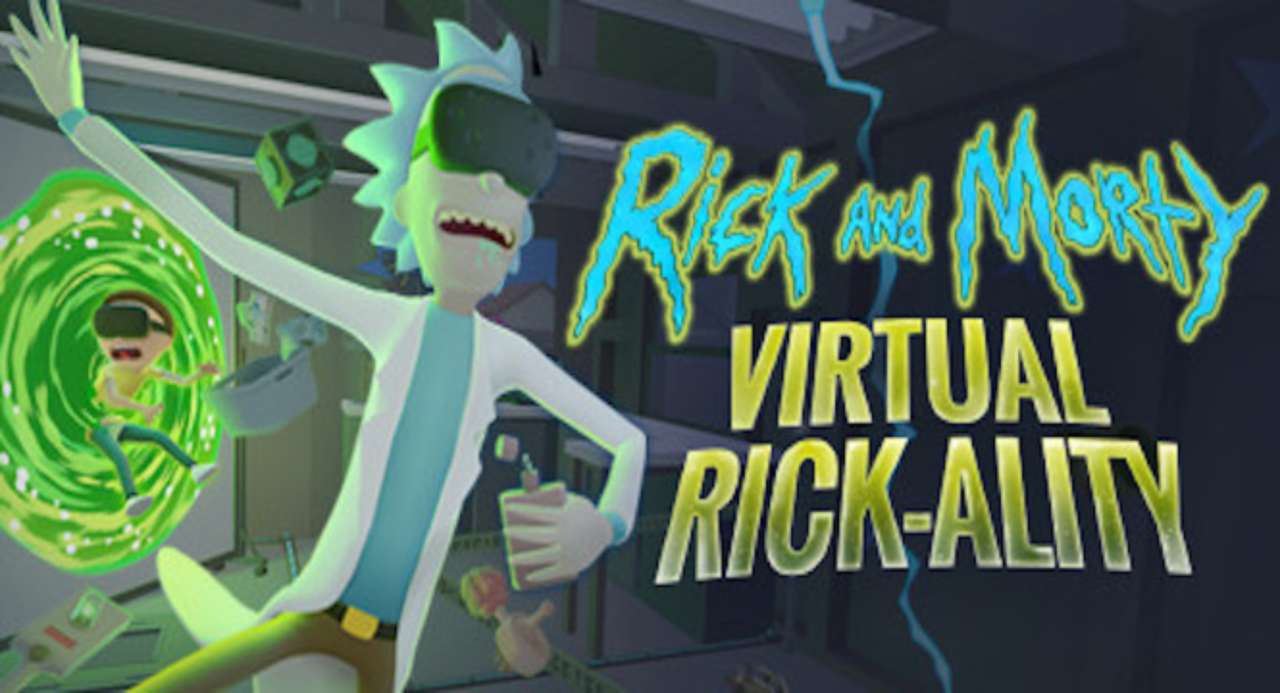 Back in 2016, Owlchemy Labs released Job Simulator on the Rift, Vive, and PlayStation VR. Judging from the title alone, you’d be forgiven if you thought the game represented the antithesis of what you’d want from your daily dose of virtual escapism. However, contrary to its no-nonsense title, Job Simulator was anything but digital dreariness. It was an excellent little game that proved that even the most mundane of chores can be a joy when with the wonders of virtual reality. Now the team behind that surprise hit has returned to bring Adult Swim’s dynamic duo to PSVR with Rick and Morty: Virtual Rick-ality. 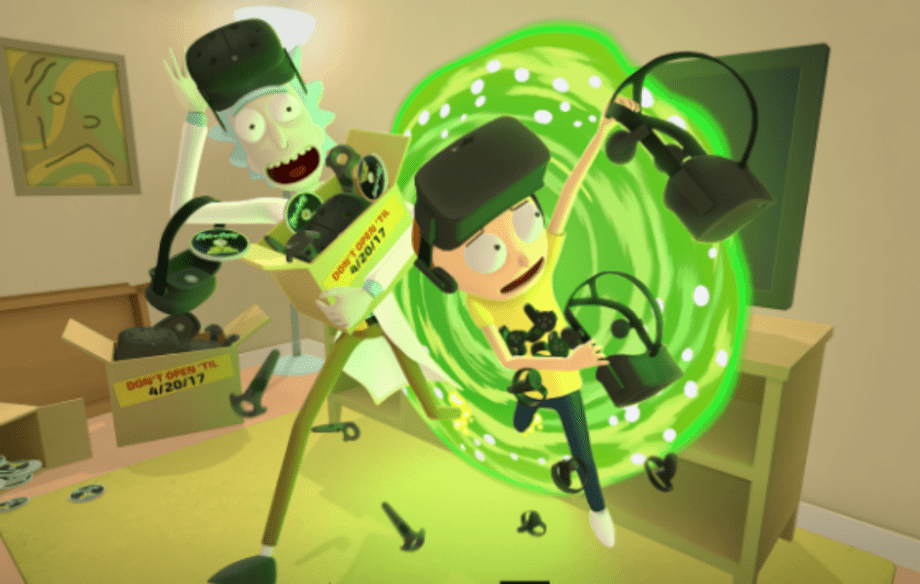 Rick and Morty: Virtual Rick-ality throws players into madcap mad scientist Rick Sanchez’s meticulously recreated garage-lab to explore its every filthy crevice. You’ll take control of a gleefully expendable clone of Morty and undertake a series of jobs. Things start out simple as your diligent clone is asked to do Rick’s laundry, recharge batteries, and solve a number of puzzles to find the parts to repair his computer. However, your tasks begin to get pretty ambitious when you begin to toy with Rick’s handy portal machine, which whisks you to environments outside of the garage. Before long you’ll be whisked away to the surface of Gromflom Prime, mowing down Gromflomites like a bargain basement Rambo with a pair of energy rifles, or floating high above the earth as you pick through the guts of an orbiting satellite. 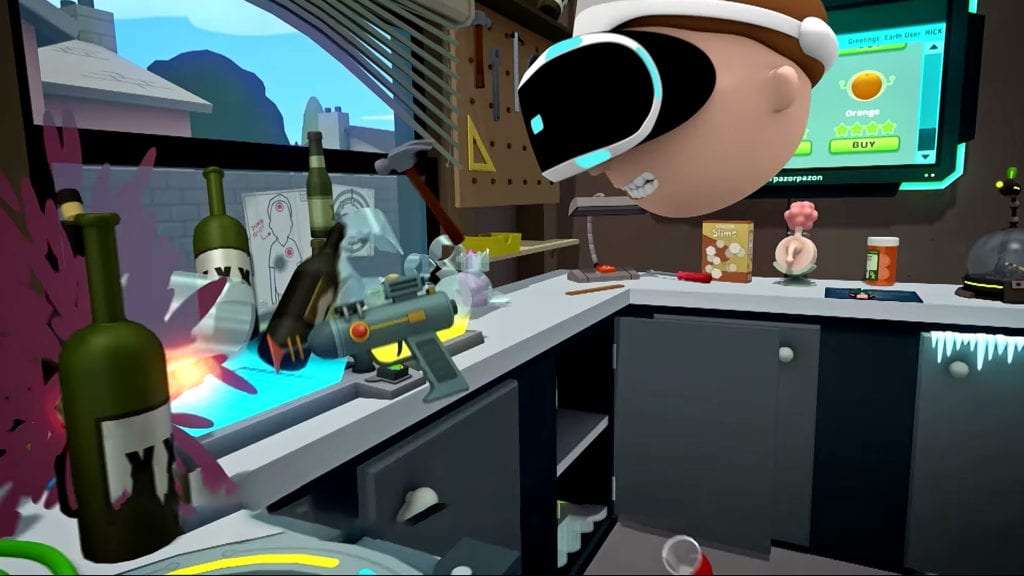 Rick’s garage is a veritable archive of alien artifacts and gadgets from the television show. And it’s a joy to rummage through the environment, snatching up various bits and bobs to see how they work. The garage is your oyster, and it’s great fun to mess up the place with the various toys that litter every surface.

The Combinator also offers plenty of laughs. This high-tech scanner allows you to meld any two items, which often ends with hilarious results. Fusing a carrot with a hammer creates what can only be described as innuedno-laden vegetable sex toy. You can even duplicate multiple Youseeks balls to create an army of clones who mimic your every motion. 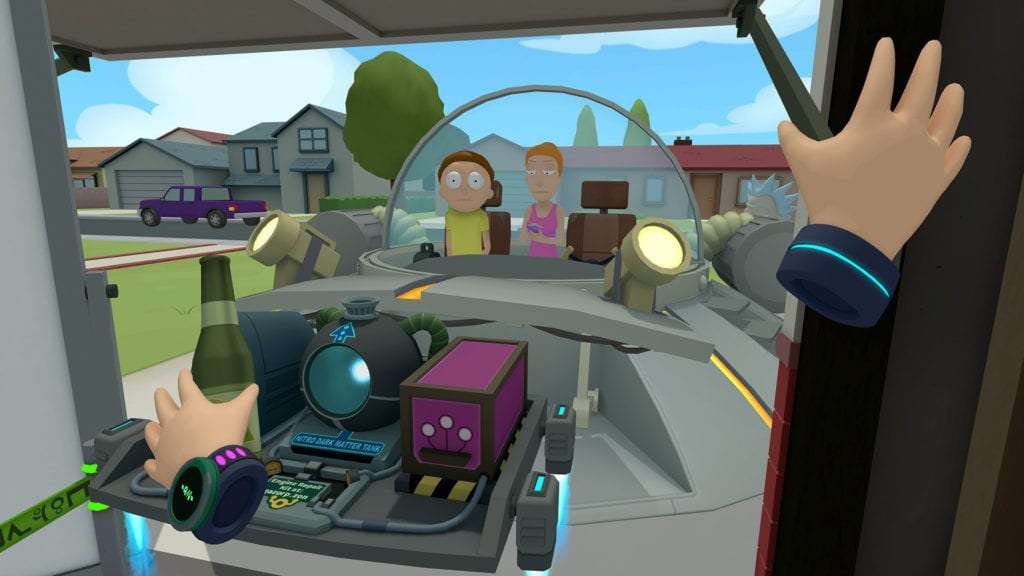 If you happened to play the aforementioned Job Simulator, you’ll feel right at home here. Developer Owlchemy Labs has done a fantastic job of grafting that same rock solid foundation to Virtual Rick-ality. Interacting with the environment is a breeze thanks to the game’s superb use of the PSVR Motion controllers. Excellent motion tracking means you’ll spend very little time flubbing around trying to get your pair of disembodied mitts to do what you want them to. Even when digging deep into drawers or snatching items stacked high above the player, I seldom had any problems with controller tracking when interacting with anything in front of me. However, things could occasionally become a little unwieldy when you have to focus on characters or objects that are positioned off to your sides.

Of course, Rick’s garage is considerably bigger than the cubicles and counters you occupied in Job Simulator. Virtual Rick-ality makes use of a simple teleport system to zap you between the three work stations located in the garage. Getting around is as painless as looking at a specific station and pressing a button. 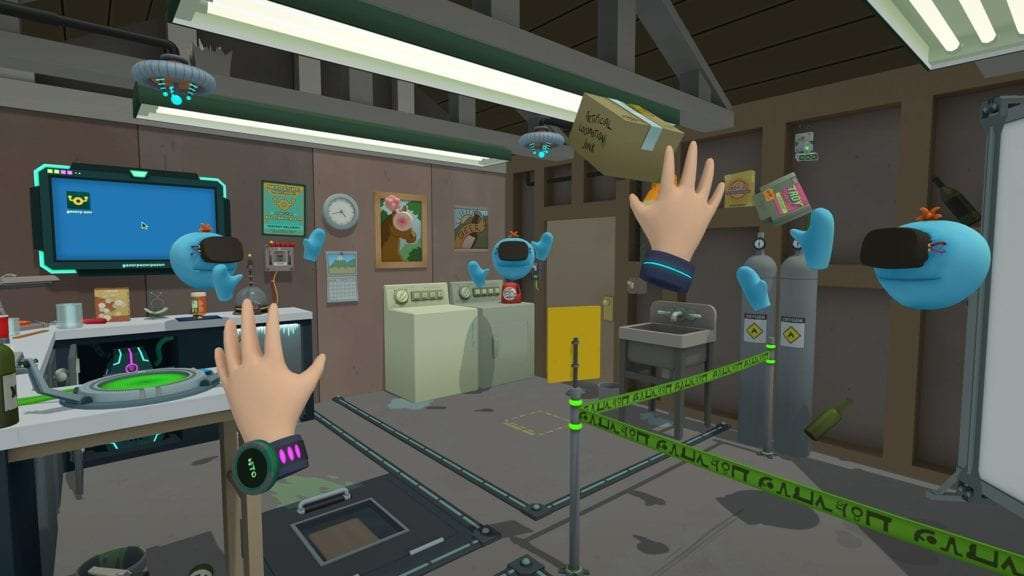 Owlchemy Labs have consistently demonstrated their ability to craft comfortable, immersive, and wholly intuitive VR experiences, and Rick and Morty: Virtual Rick-ality is no exception.

It won’t take you long to wrap up Rick and Morty: Virtual Rick-ality’s main story. All told, you can see most of what the game has to offer in roughly two hours. But if you’re a fan of the series (and let’s face it, who isn’t?) you’ll find a short but sweet experience that’s filled to the brim with loving fan service. And even after the credits roll it’s still plenty of fine to fire up again just to mess around with the virtual toybox it provides. You can also go back to find all of the hidden cassette tapes that are scattered about, which offer some entertaining clips from Justin Roiland, Dan Harmon, and other members of the show’s cast. 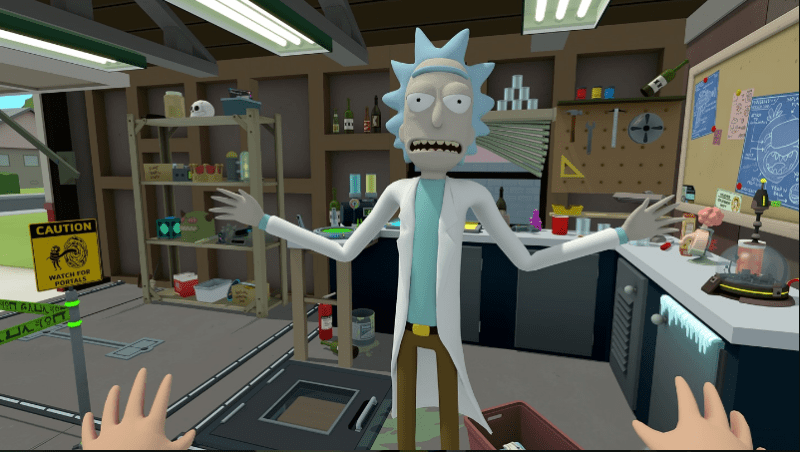 If you’re hoping for a fully-fledged adventure in the Rick and Morty universe, Rick and Morty: Virtual Rick-ality probably won’t scratch that itch. However, if you’ve ever dreamed of messing around in Rick’s garage, the game delivers a well-crafted and often hilarious playground that does an amazing job of capturing the spirit of the series. If you’re a Rick and Morty fan and need your fix until the inevitable release of season 4, this bite-sized experiment is for you.

Rick and Morty: Virtual Rick-ality is available now on PSVR for €29.99