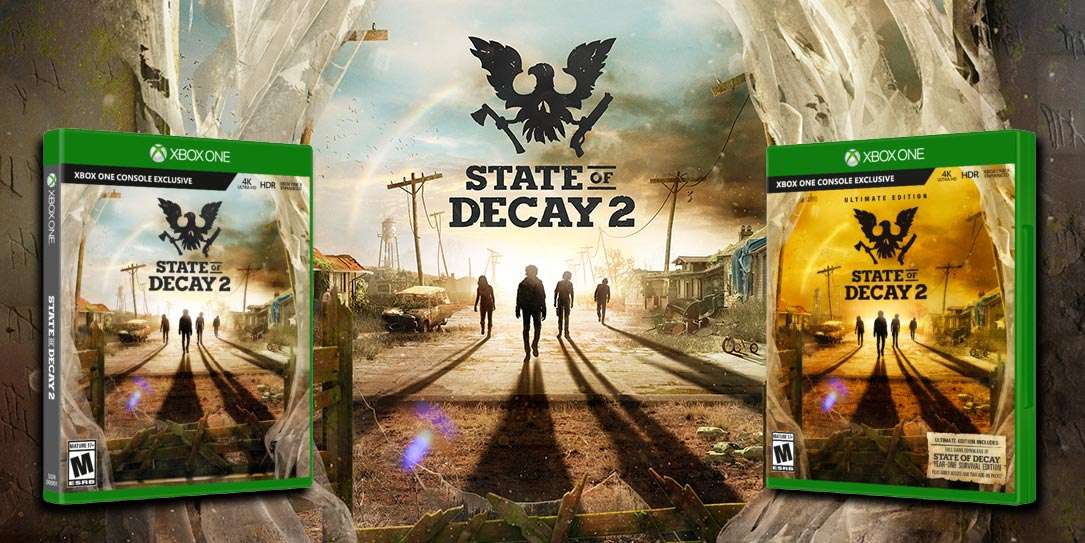 The original State of Decay was something of a break-out hit in 2013. It was among the first of the open-world zombie survival games and now after a long wait State of Decay finally has co-op multiplayer. Equipped with 3 new maps, 50 different vehicles and the all new blood plague, State of Decay 2 is now here and it’s something to be excited about, however, it should not be known that it’s not without its flaws.

After an exciting wait State of Decay 2, coming from developer Undead Labs and its publishing partner, Microsoft, is now here, available as a cross-platform title for Windows 10 and Xbox One, and it’s also available through the Xbox Games Pass service. 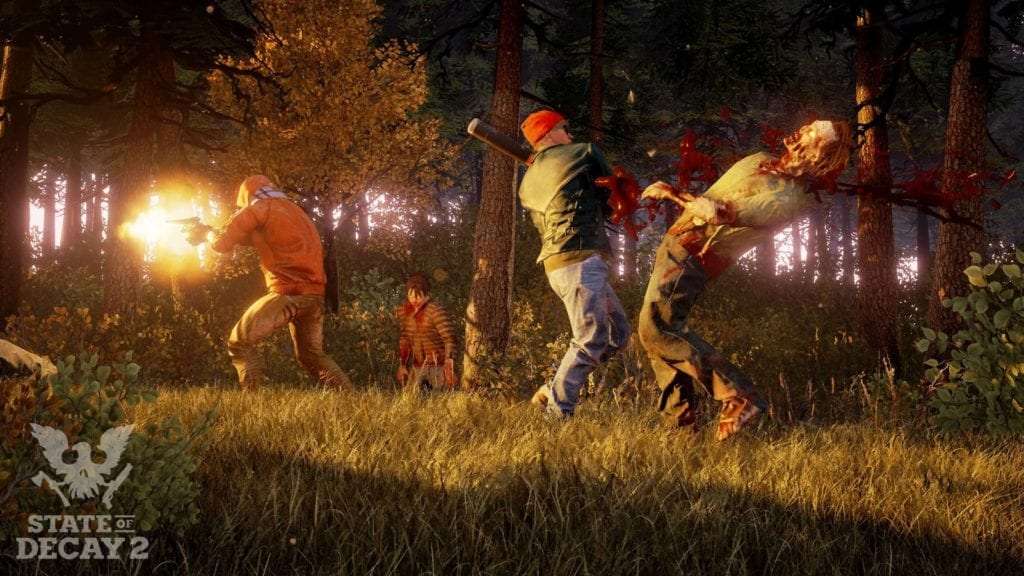 Starting out, you play a 10-15 minute tutorial before heading off to one of the 3 maps and setting up your first base. State of Decay 2 opening by letting you choose not one character, but a pair. Each has distinct skills, as well as a background that explains their traits. Some are better at cardio, others come with medical knowledge. Whomever you select, though, they’ll become your starting protagonist. Or, rather, protagonists. You don’t play as a person, but instead as all the survivors, leaping between them. You’re an invisible hand, guiding their actions, and hoping that you can pull them together to make it. The tutorial shows you the basics of combat and scavenging mechanics, which is enough to get you by to begin with. Some of the more in-depth gameplay such as managing resources and building on slots are somewhat left to the player to get to grips with, with some on screen prompts to point you in the right direction. There is a “how to play” section in the menu that gives a little more detail, but still can leave players confused as to what to do, especially newcomers to State of Decay 2.

Before that, let’s start off by talking about the world; the game, in general, is very detailed with great map design. No two areas look the same, offering a variety of different locations to explore, from forests to towns to hospitals and army bases. Most buildings (and even some abandoned vehicles) provide valuable supplies for the survival of your community, and you can scout potential locations and potential dangers from designated towers dotted across the map.

There’s a day-and-night cycle present in State of Decay 2, and as you might imagine, night time can be terrifying. The only light available comes from your torch or the headlights of your vehicle, making exploring abandoned buildings and scavenging a difficult task. 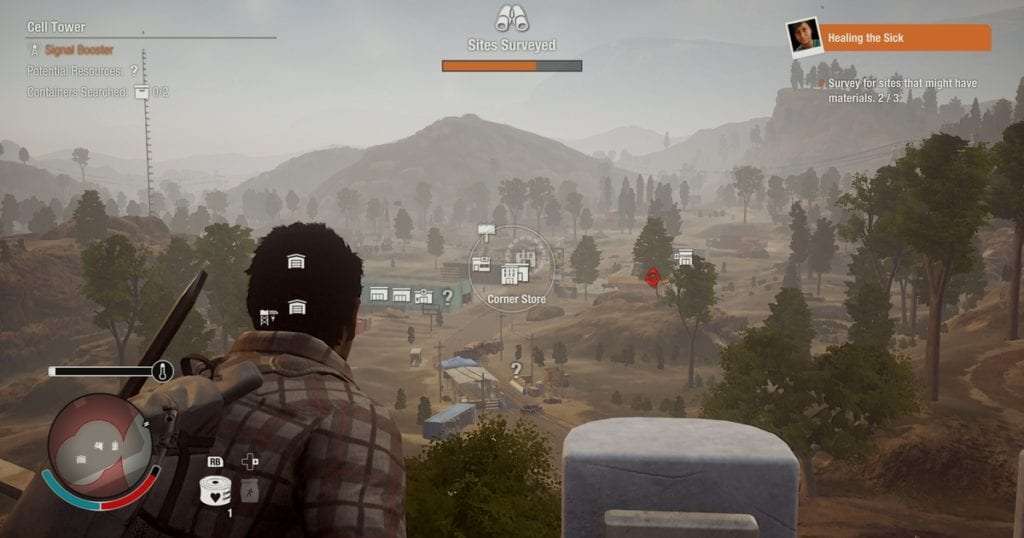 The overall goal of State of Decay 2 is to establish a thriving safehouse. Players accomplish this through looting copious amounts of resources or helping out other NPC’s in the world. You can choose to have a small community or grow it to something larger. However, the size of your community determines whether you need more or less management. Safehouses are generally your safe place. However, they can still fall under attack from the occasional meat munchers — especially if it’s not wonderfully secure. You’ll be able to build various facilities should your resource count allow you, opening up gameplay options. For instance, gardens to be grown, infirmaries can treat injured or infected members, and you can brew some top quality post-apocalyptic coffee.

Unfortunately the process of looting is incredibly tedious after a few hours, it’s actually a rather clever system. Loot isn’t just randomly spawned inside areas with searchable items. What you’ll find is that garages might mainly contain fuel, supermarkets for food, and houses might have medicine cabinets. 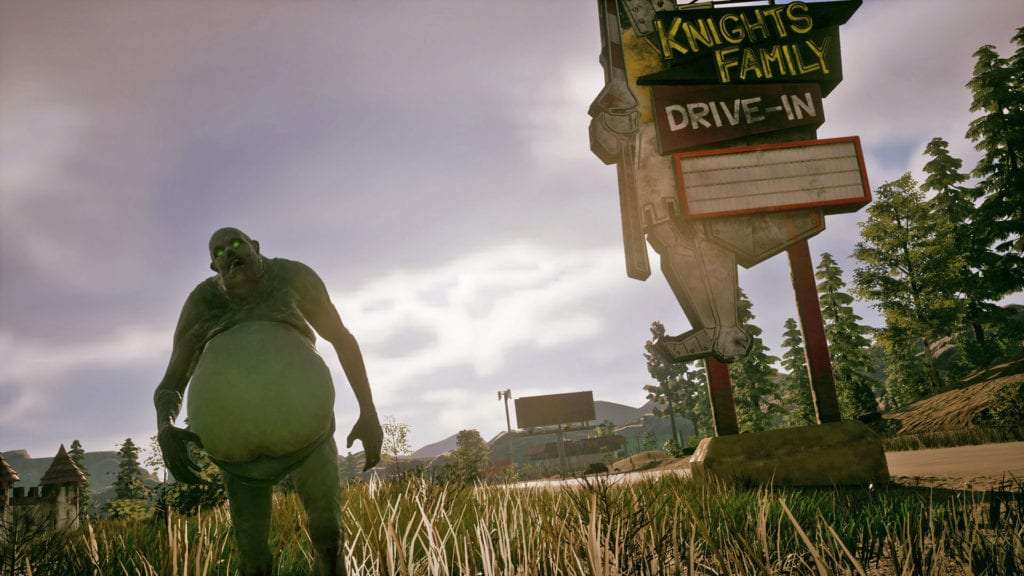 When you do come face-to-face with a horde of zombies (trust us, it happens a lot), you have two choices; run or fight. Don’t get too overconfident though, as State of Decay 2 is much more realistic than other games in terms of combat, meaning you can’t take on 10 zombies by yourself and expect to come out victorious. The melee combat is simple, with a single button to attack and one to dodge, but that doesn’t make it any less satisfying. Watching your survivor chop off arms and legs never gets old, and as they become more skilled, they will unlock advanced combat techniques that can provide the upper hand in tense situations.

Of course, the biggest threat in State of Decay 2 is permadeath. That’s right, if you make a wrong call when out in the world and your survivor gets eaten by zombies, they’re gone for good. The game constantly autosaves too, so reloading an earlier save is rarely an option. It’s a great mechanic, as you become more attached to your survivors as time passes and you upgrade their various skills, making their deaths all the more devastating. 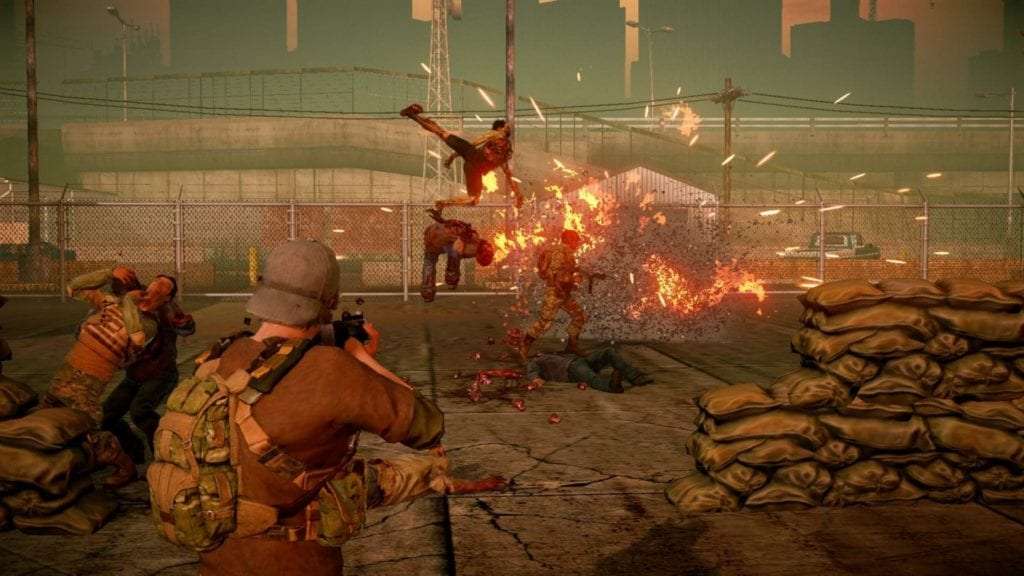 It’s not just devastating in the sense that you’ve lost a member of your team, either. Each survivor possesses a unique skill set that can be developed throughout the game, providing access to advanced base upgrades. These skills can range from computer skills to chemistry, and if you lose your tech-savvy survivor, you can wave goodbye to future upgrades. It’s amazing just how quickly a community can fall apart from the death of a single valuable survivor.

One of the big selling points of State of Decay 2 is four player co-op. State of Decay 2 suffer from some performance and other issues while playing co-op online, most notably when travelling in vehicles the game suffers from lag for a few seconds now and then, sometimes resulting in some frustrating collisions with scenery, and from my experience resulting in the vehicle getting destroyed. Other issues include visiting players not being able to access their locker to store their items resulting in them having to leave and rejoin the game. Thus taking away from the overall experience. Something that Undead Labs should have got right from the get go, but I assume the developer will address in a patch or two in the coming weeks.

Additionally, you can send out a flare in tough situations with the hope that a random player will join your game, but just like in real life, sometimes you’ll get an answer and sometimes you won’t. No one ever came to my aid the few times that I fired one off. 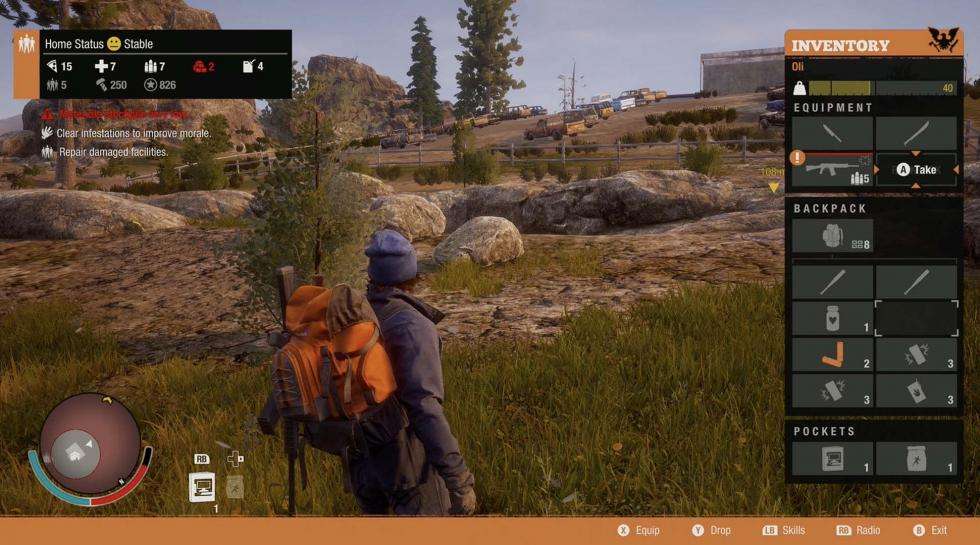 I should note State of Decay 2 works really when it works and when it does not, it fails humorously. As we’ve all come to expect with an open-world game this size, there are a few bugs. While I’ve seen some reviews that mention game-breaking bugs, I didn’t personally run into any of them during my play-through. I did, however, encounter many little annoyances. Vehicles get stuck on rocks sometimes and it’s impossible to free them. There were a few instances when I couldn’t position my character correctly to talk to other survivors, and zombies just pop into the screen out of nowhere sometimes. At one point, I entered an empty garage only to be ambushed by four zombies that seemed to come out of the walls every time I turned around. My favourite funny bug is the zombies seen falling from the sky when driving down the back roads.

But despite these flaws, I really enjoyed my time with State of Decay 2. I want to keep playing each night, collecting more supplies, and building my base & community bigger and better. This might not be the killer app exclusive that the Xbox One so desperately needs right now, but it’s still a rock solid survival RPG that most gamers will enjoy.