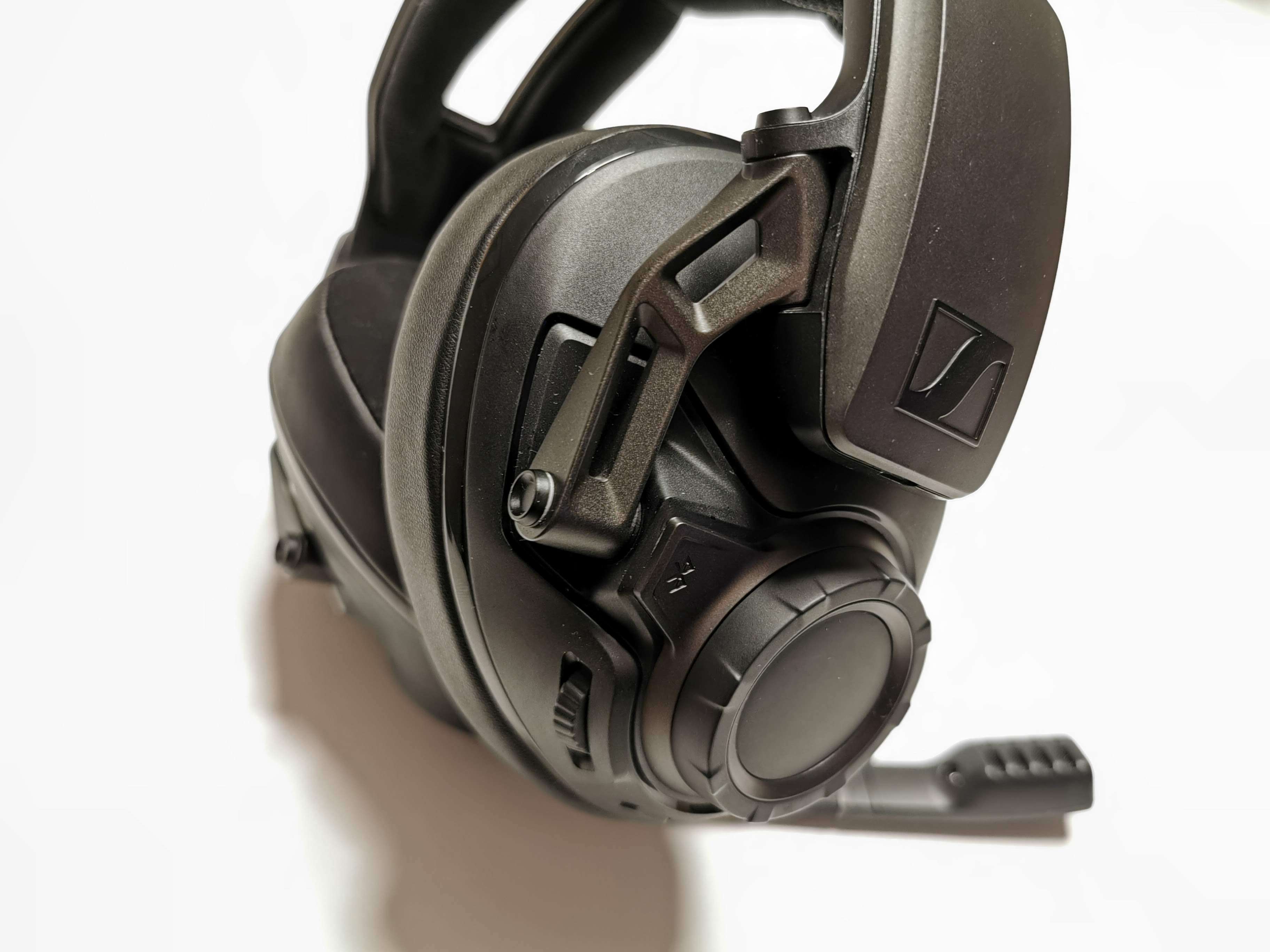 First unveiled at Computex in June, Sennheiser’s newest gaming-focused headphones are a seriously impressive set of cans. The Sennheiser GSP 670 Wireless Gaming Headset is extremely sturdy and robust with deep, clear audio but, understandably, they’re not cheap. Coming in at £299.95/€349.95, they’re definitely some of the most expensive gaming cans you can get right now but, with Sennheiser’s name behind them, you should expect you’re getting a premium product. 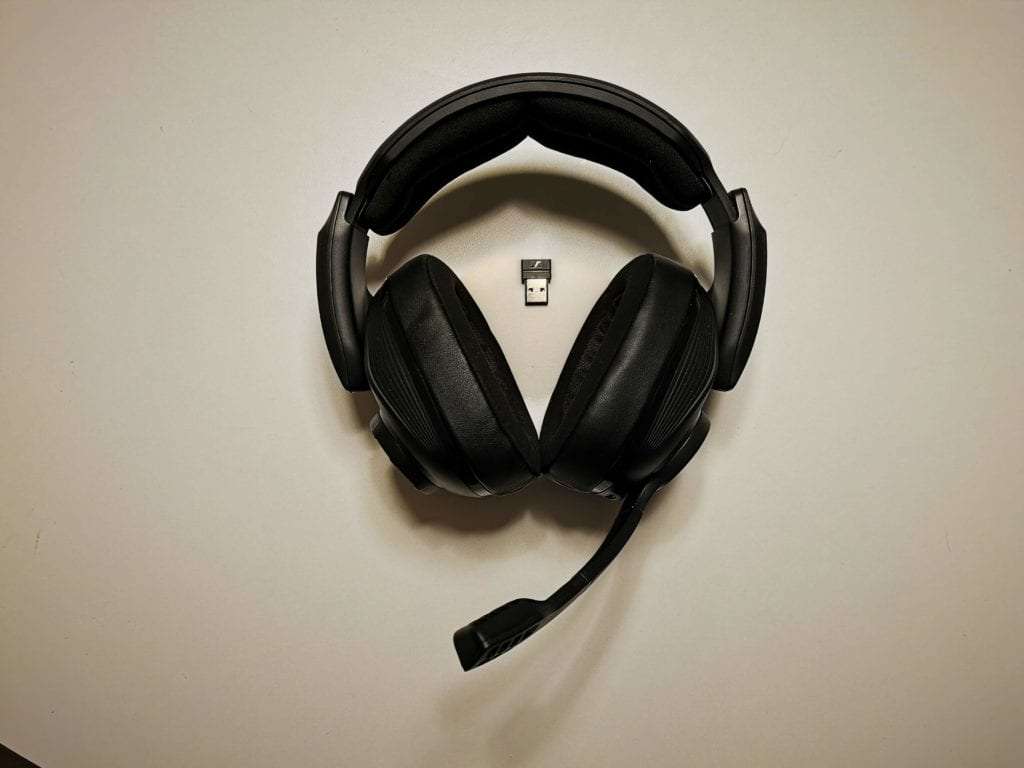 When it comes to build quality, the GSP 670’s are as sturdy as they come. Their matt black and gun metal grey finish creates a stealthy look and the clever ‘compression’ setting adjusters on the top of the metal headband add to the overall level of robustness. Weighing in at 398 grams, they’re definitely not light but are still lighter than the Steelseries. 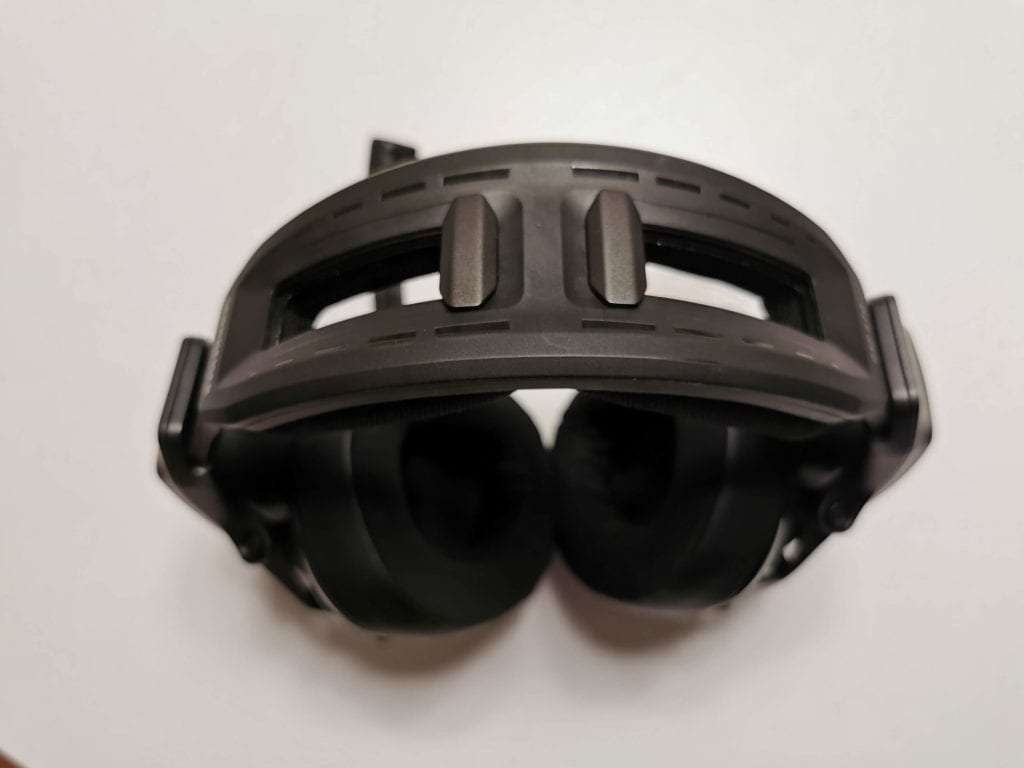 When you first don the headset, it does take a small bit of time to get the correct fit and seal and people with larger ‘craniums’ might find them slightly too snug. The earpads themselves are very comfortable and have a nice suede-like finish to them which, again, adds to the overall premium feel of the headset. The fact that these are close-backed cans means, unlike open-backed headsets, your ears can get a little warm in the more intense gaming sessions. 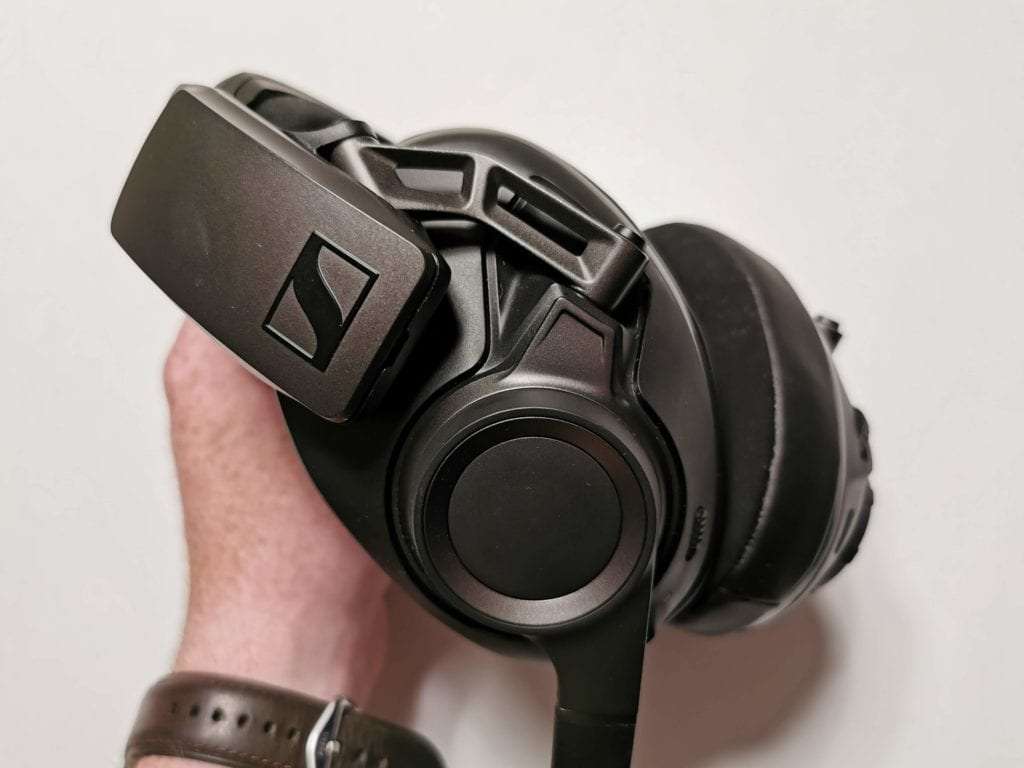 They’re charged via Micro USB but we wish Sennheiser would have went with USB Type C instead for convenience. There’s also a Bluetooth 5 Sync/slider button below the adjustable mic which also allows you to check the battery level via a voice response. The volume knob on the right earcup has a nice weight to it and also acts as the power switch, simply by twisting in a counter-clockwise direction.

What makes these cans such an impressive offering from Sennheiser is that they’re the company’s first ever gaming-focus wireless headset so, in the box, you also get a USB dongle which gives you a low latency wireless connection for both your PC and PS4. Unfortunately, there’s no Xbox One support just yet. If you do use the dongle for your gaming, you will reduce the battery from 20 hours to 16 but this is still mightily impressive given just how much you’re getting in terms of audio quality of these cans.

Because these are targeted at gamers, you can also switch out the side plates for custom ones so, for example, DOTA 2 fans can show their loyalty with your own DOTA 2 side plates. 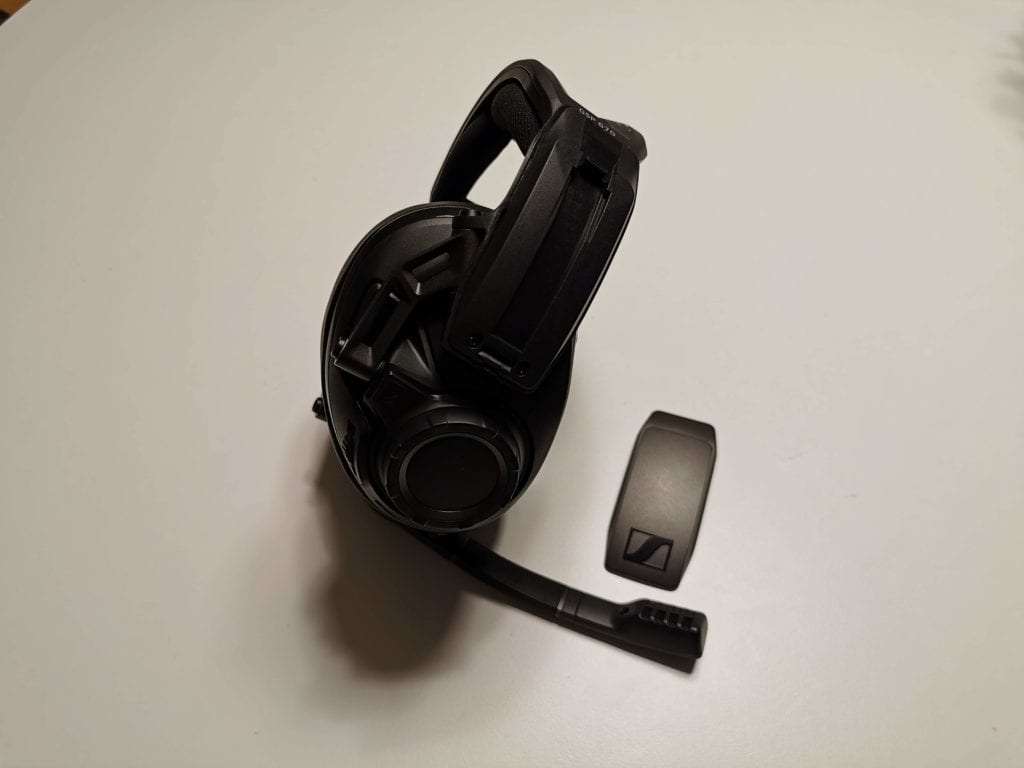 One small side note, when using these headphones in day to day gaming sessions, you’ll definitely want to either have them on, properly over your ears or off your head completely because, unfortunately, the do not sit comfortably around your neck when not in use.

When I first set these headphones up, I tried them on my PS4 Pro. When setting the GSP 670’s up for the first time, if your console doesn’t automatically switch over to the headset for audio output when you plug in the dongle, you can head over to the settings tab and switch it over in the ‘Audio Devices’ section under the ‘Devices’ tab.

Firing up Days Gone from Bend Studios was a great experience with the deep rumble of my motorbike backed by some powerful bass while the screeching of the nearby ‘Freakers’ was unnervingly sharp and precise. The spatial effect was also impressive with very good separation between the two sides. Overall, there was a nice richness to the games audio effects and the underlying score that plays throughout the cutscenes was well handled whilst not drowning out the dialogue. 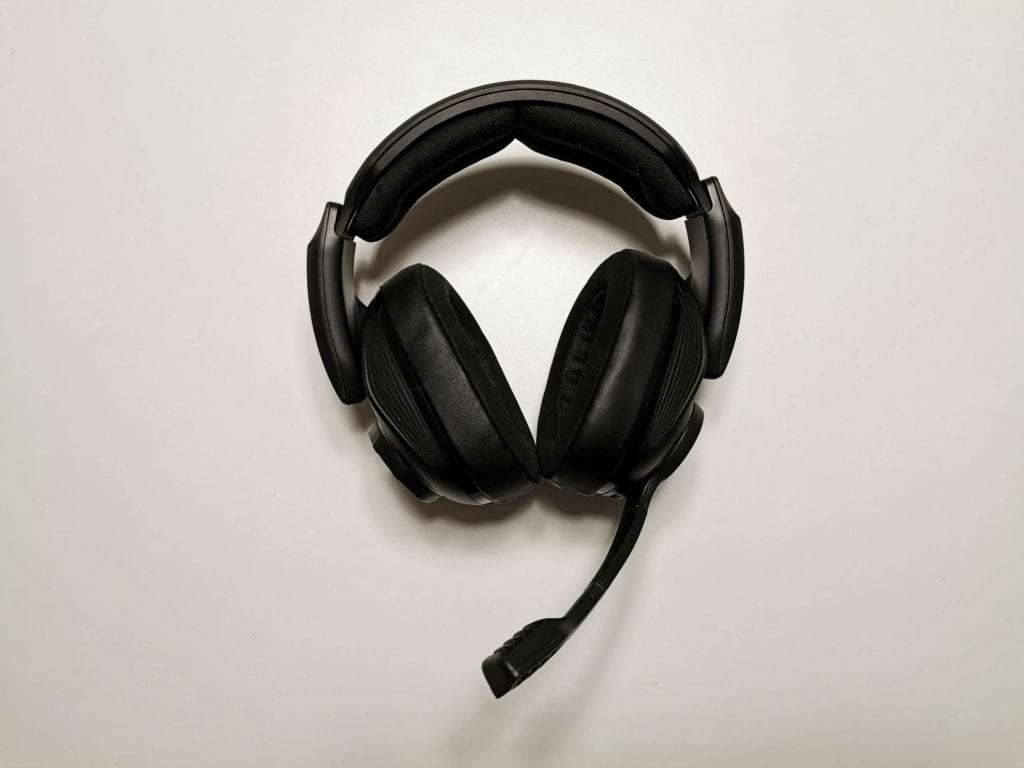 Online gaming also worked well with the ability to enable and disable the adjustable microphone arm by simply raising it up and down. Friends who I was playing against online also commented on how clear and detailed my voice was coming across thanks to the ‘best in class’ microphone Sennheiser developed in house with advanced noise cancelling. Being able to control the volume for the chat via a separate volume dial was also a nice addition.

Another great feature was, whilst I was connected to both the USB dongle and my phone (via Bluetooth), I was able to accept calls seamlessly on the headset.

One thing I did wish was implemented was a physical button on the headset itself which would allow me to switch between sources because, right now, the USB dongle connection gets priority so I needed to disable this on the PS4 Pro before being able to listen to audio from my phone that wasn’t an incoming call. 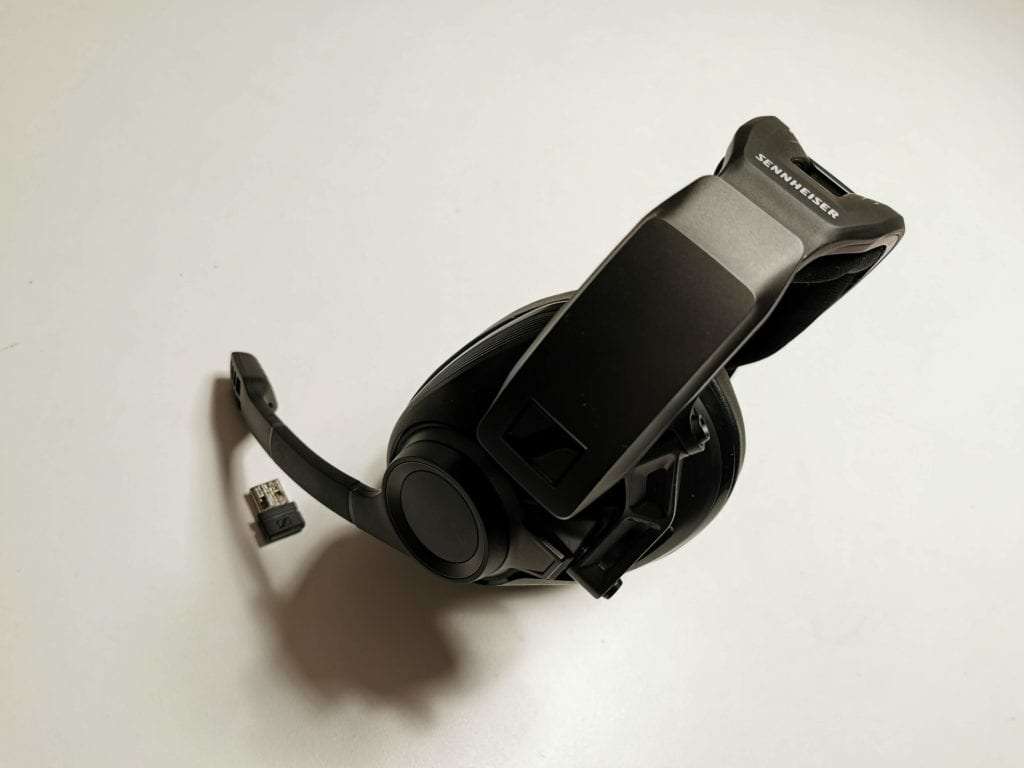 When I hooked these cans up to my work PC, they delivered the same impressive audio output I got from my PS4 Pro. Admittedly, I didn’t get much time to play any PC games with these but I imagine the experience is pretty identical to what the PS4 Pro was offering albeit with a few nice additional features. One benefit to using the GSP 670’s on PC is that its only on PC that you can access these extra features included with these cans including adjustable equaliser options and 7.1 virtual surround sound. That said, the regular stereo quality is also impressive in its own right.

Overall, we had a great time testing of the new Sennheiser GSP 670 Wireless Gaming Headset. As its name implies, the wireless nature of the headset is fantastically liberating and the 16 hours battery live is impressive for any serious all-night gamers out there. Yes, they’re expensive but they really are one of the best wireless gaming headsets you can buy right now.