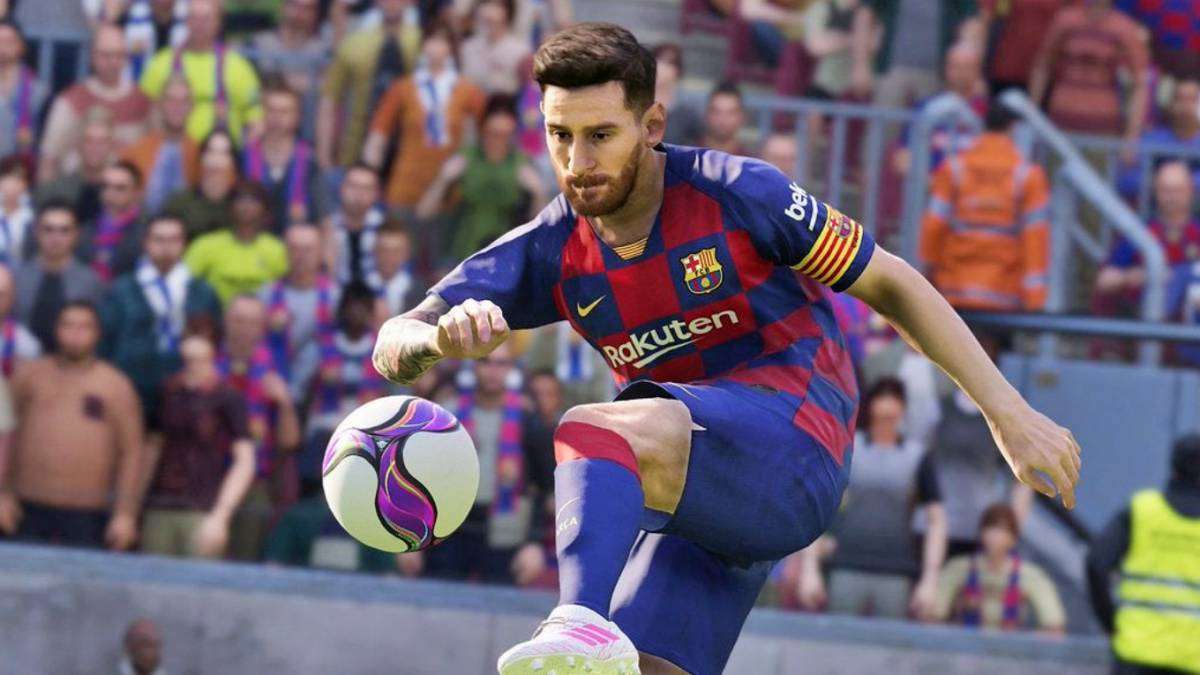 The Pro Evolution Soccer series has long trailed behind EA’s association football juggernaut. Not since the PlayStation 2 has the series captured truly the public’s imagination and more importantly, their cash. Despite some excellent entries since the good old days, FIFA’s stranglehold on soccer’s biggest licenses has continued to bury PES.

This time, Konami have attempted to relaunch the series with a new naming scheme to reflect the importance of competitive gaming to eFootball PES 2020. To that end, PES 2020 adds a new mode and streamlines its online MyClub mode. The former football king also attempts to pilfer some of EA’s offline business, breathing a mixed bag into the addictive Master League.

All of these new modes, tweaks and adjustments would mean nothing without progress on the pitch and eFootball PES 2020 features some fundamental gameplay changes that will force old dogs to learn new tricks. 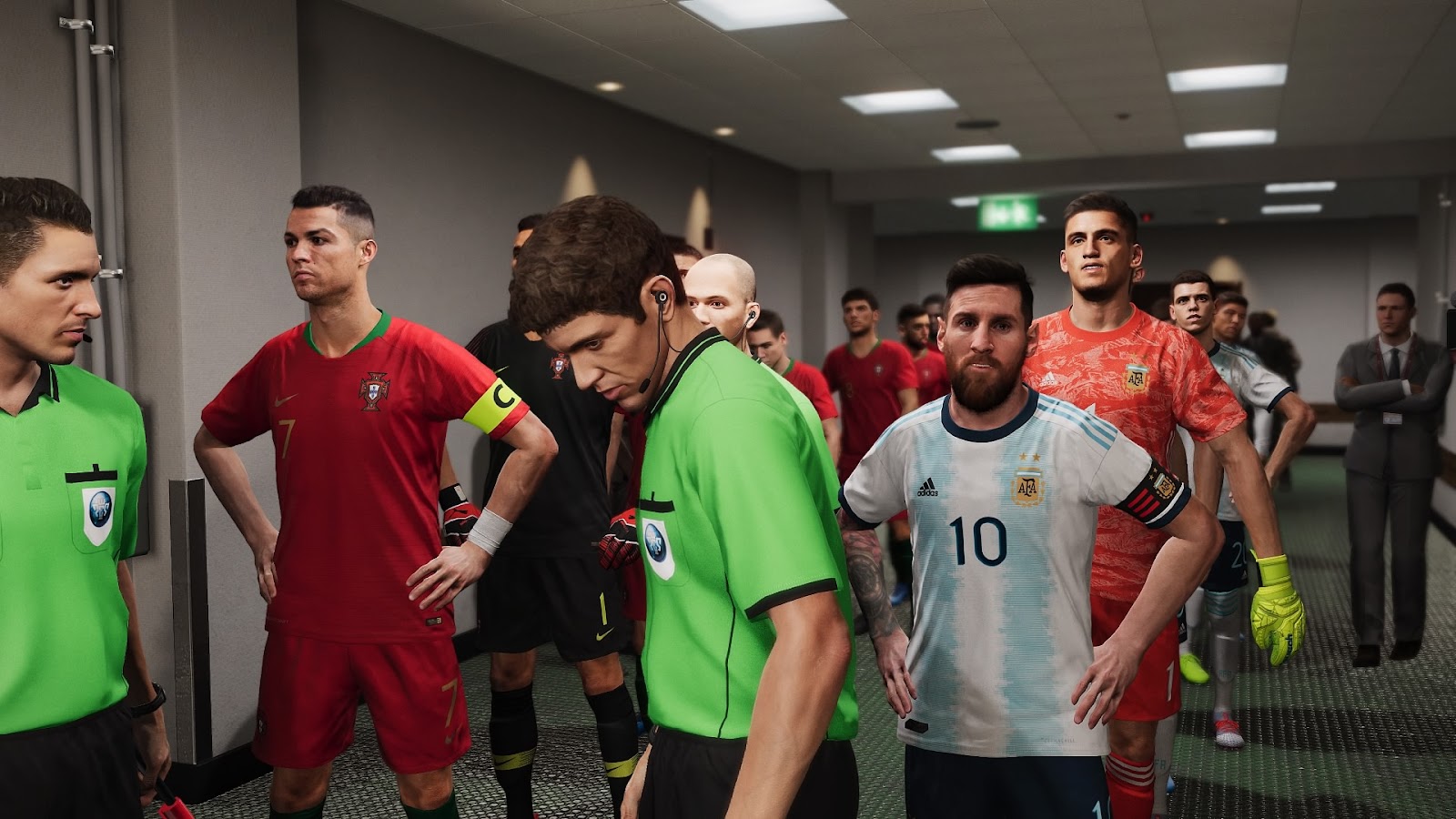 The most noticeable gameplay change is the addition of some mild mixed-martial arts elements to matches. Players will pull and drag, kick shins after the ball is played or bodycheck with a slightly unrealistic regularity. It takes a little getting used to but the time-honoured tradition of firmly massaging someone off the ball won’t work – you’ll give away a free kick or penalty now.

Occasions approaching 50:50 challenges are creditably let run by the referees but these also come about a little too often. Slapstick moments where three pairs of players are tripping over each other while a ball scrambles free are not uncommon.

The addition of a contextual professional foul is a minor detail but it adds to the brawling qualities of the game. They are also funny to behold.

Another physical system that is added to the model is context-sensitive passing. Just like Pro Ev has long forced you to plant a foot, be facing the intended target and be well-balanced as you shoot; passes can now be miscued. This particular mechanic, as simple as it sounds, is a revelation. 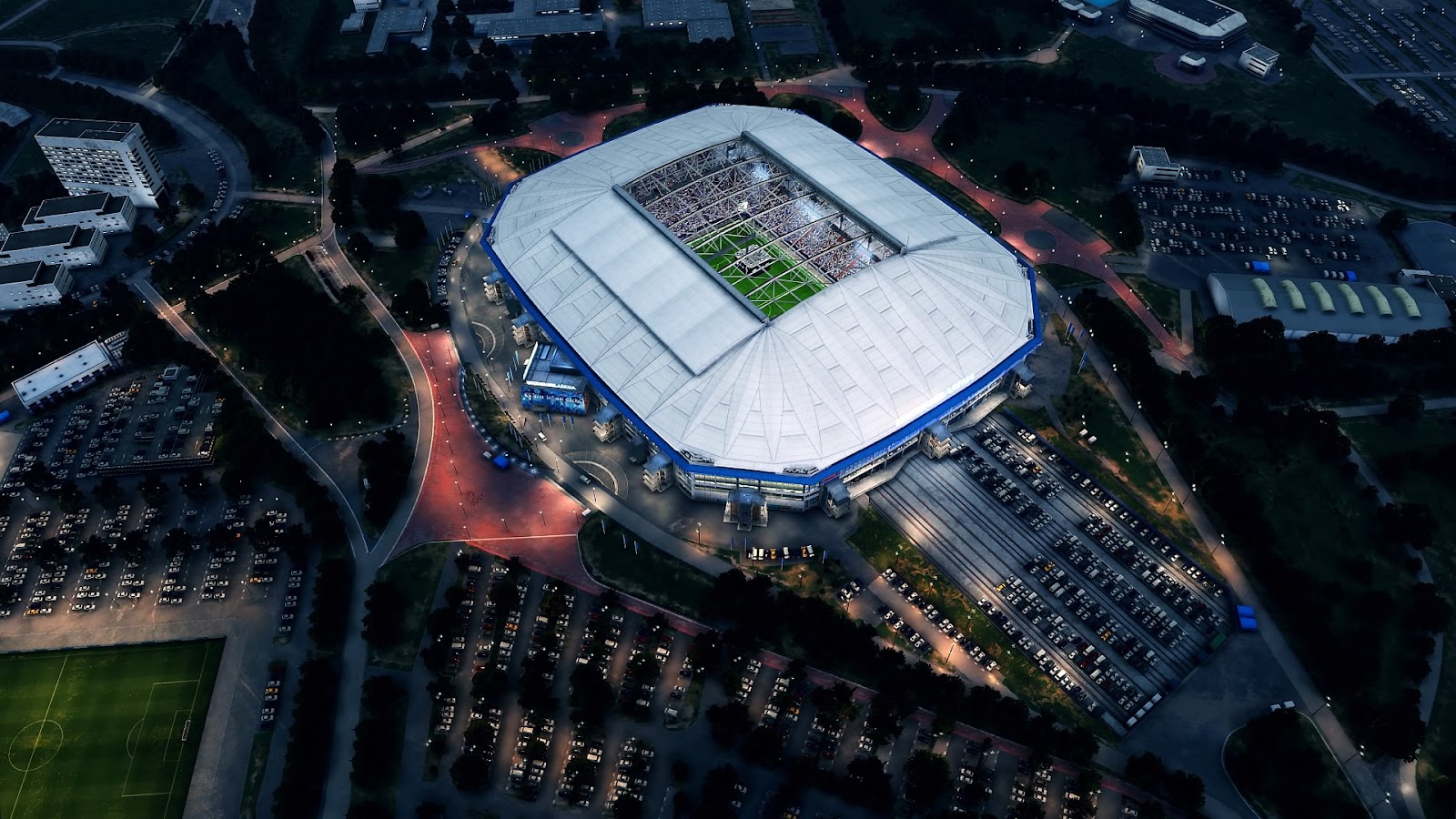 The game moves at the same speed as 2019 but the pace of the matches is slower as every pass needs far more thought. I found it easy to adapt to the demands of the system, making more conservative passes and looking for a spare man as soon as the ball came my way.

The other fundamental shift is the removal of the finesse dribble button and its replacement with a ‘close control’ stick. This mechanic is much tougher to get used to – the R2 button (RT on Xbox) allowed traps or subtle first-touches whereas the trap button is now the same as sprint.

The new control scheme comes with an overhauled dribbling system. Allowing seamless transitions to full-speed and the ability to swiftly move the ball in the tightest of spaces – it’s not overpowered but it adds a lot for defenders to think about. Getting too close can easier lead to being left for dead or giving away a soft foul.

eFootball PES 2020 is probably the most realistic stab at the Cambridge code to date. The series has always made players work for every sublime moment but eFootball PES 2020 tries to take it to the next level with its miscues and punishment for bumbling.

However, the AI prevents the game from reaching the perfection within its reach. Too often a loose ball is of zero interest to players who aren’t under your direct command. There are moments where the goalkeepers will allow a through pass straight into the net because the pass wasn’t for him. It’s bizarre and breaks the immersion that eFootball PES 2020 works hard to create. 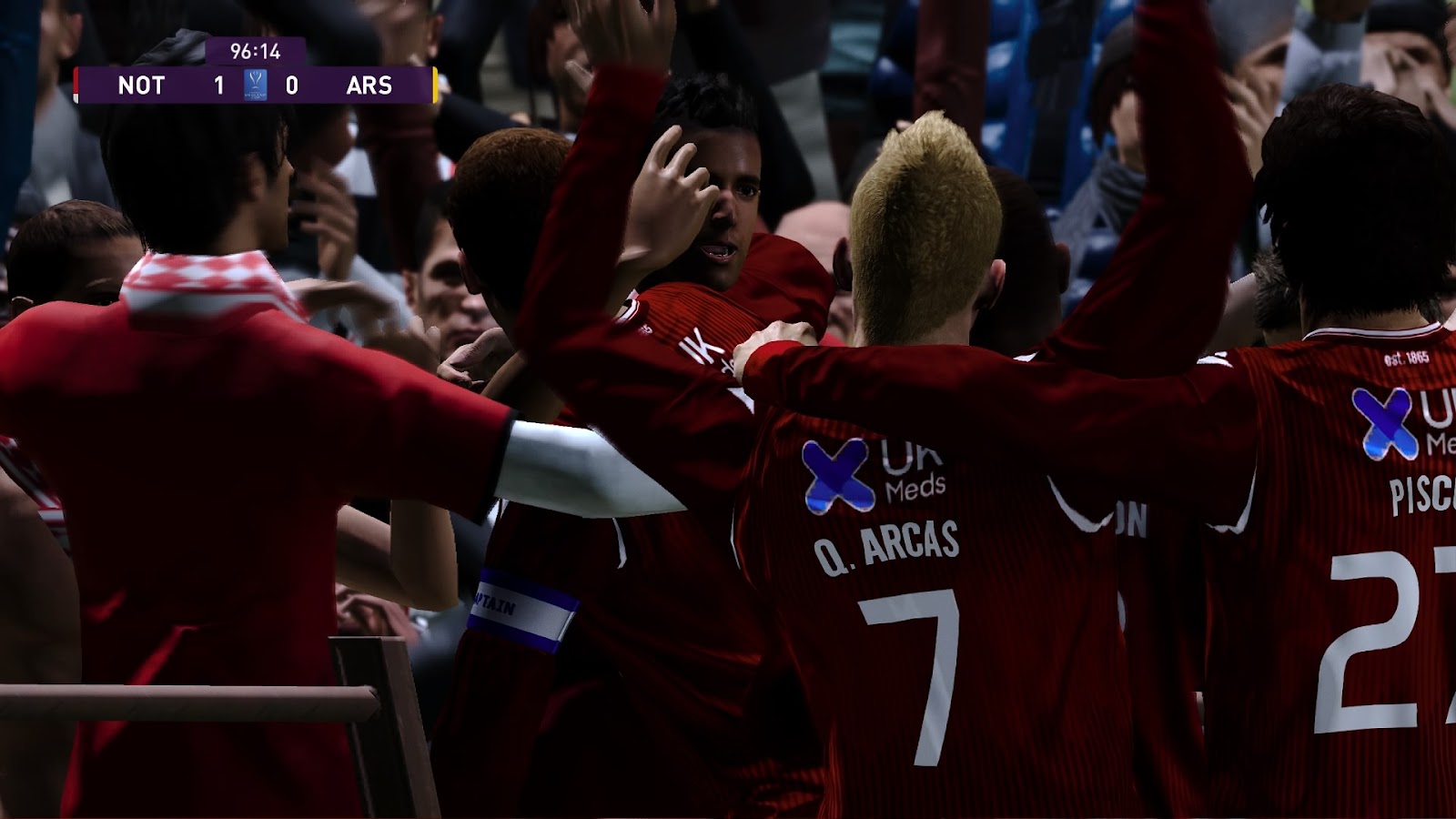 Some of the more special celebrations are kept for special occasions – like an extra-time goal against superior opposition in a cup quarter-final. Little do these happy people know what horror will befall them in the semi-final.

Another gripe is how defenders and attackers stick to each other like glue. When attacking, your AI support will start hugging towering centre-halfs, leaving you to look elsewhere and then lose the ball. When defending, it’s worse. If your centre-half touches an attacker who has the ball they will latch on, leaving you to be turned at will.

eFootball PES 2020 comes with a licensing coup or two. Juventus will be exclusive to the game and since FIFA lacks the powerful editor and option file community of Pro Ev, there is no getting around this.

The lack of Premier League, Bundesliga, Liga MX and MLS licenses will hurt the game again this year but minor improvements to the editing suite mean a remedy is easier and closer to perfect than ever. A USB stick, Google and 15-30 minutes will bag you official kits, logos, sponsors and official partners and more. 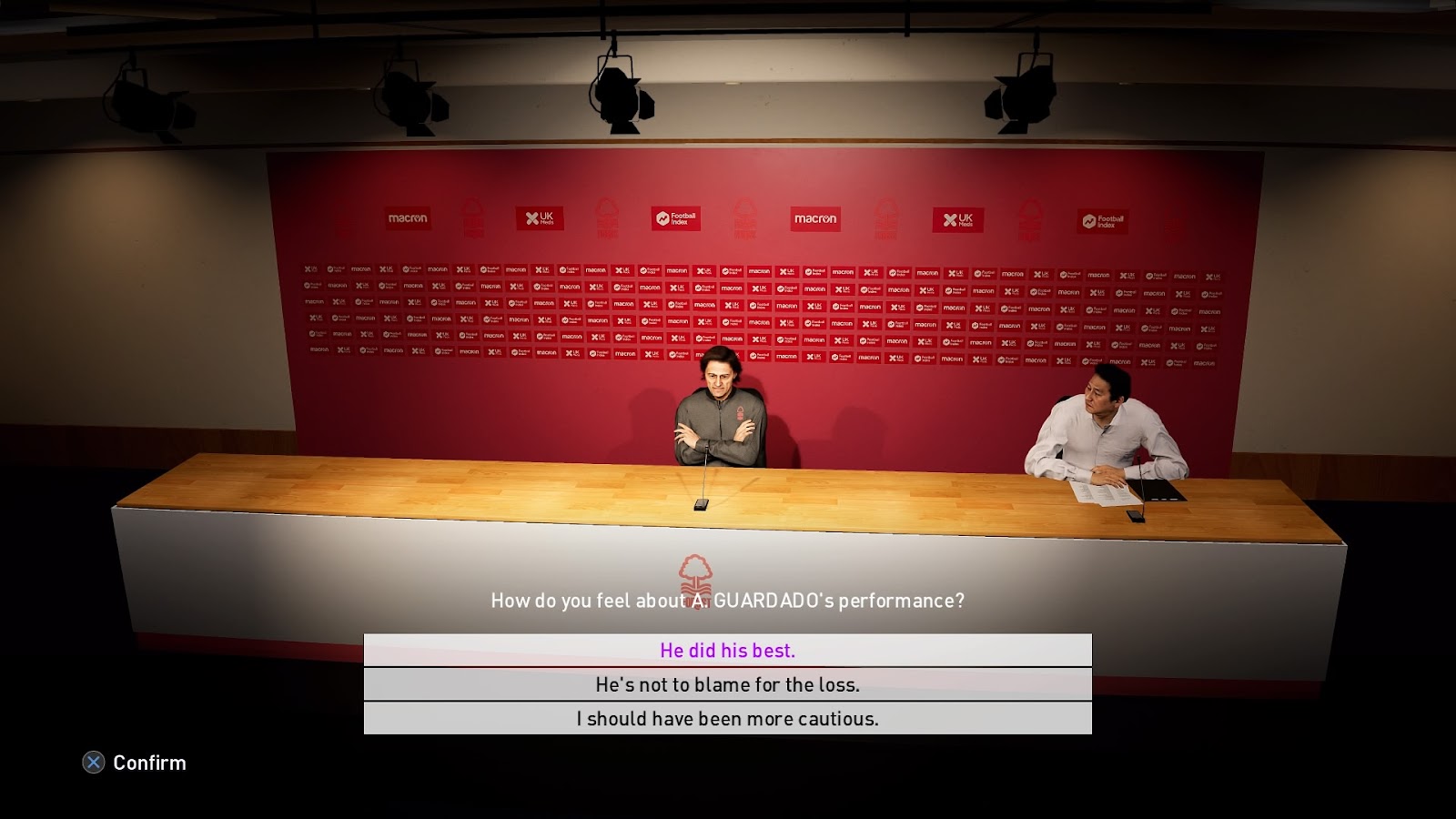 It would have been nice to have a greater proportion of the dialogues make a difference. This one reads like it should upset or comfort the player – it does neither.

This effort still puts huge numbers of potential fans off so Konami’s effort to make editing and option file sharing as easy as possible has to be lauded.

Konami also changed their development and marketing focus. Messi’s tattoos and the exclusive Juvé license are only band-aids in the licensing war – the real changes are aimed at enticing abused FIFA offliners over the fence. 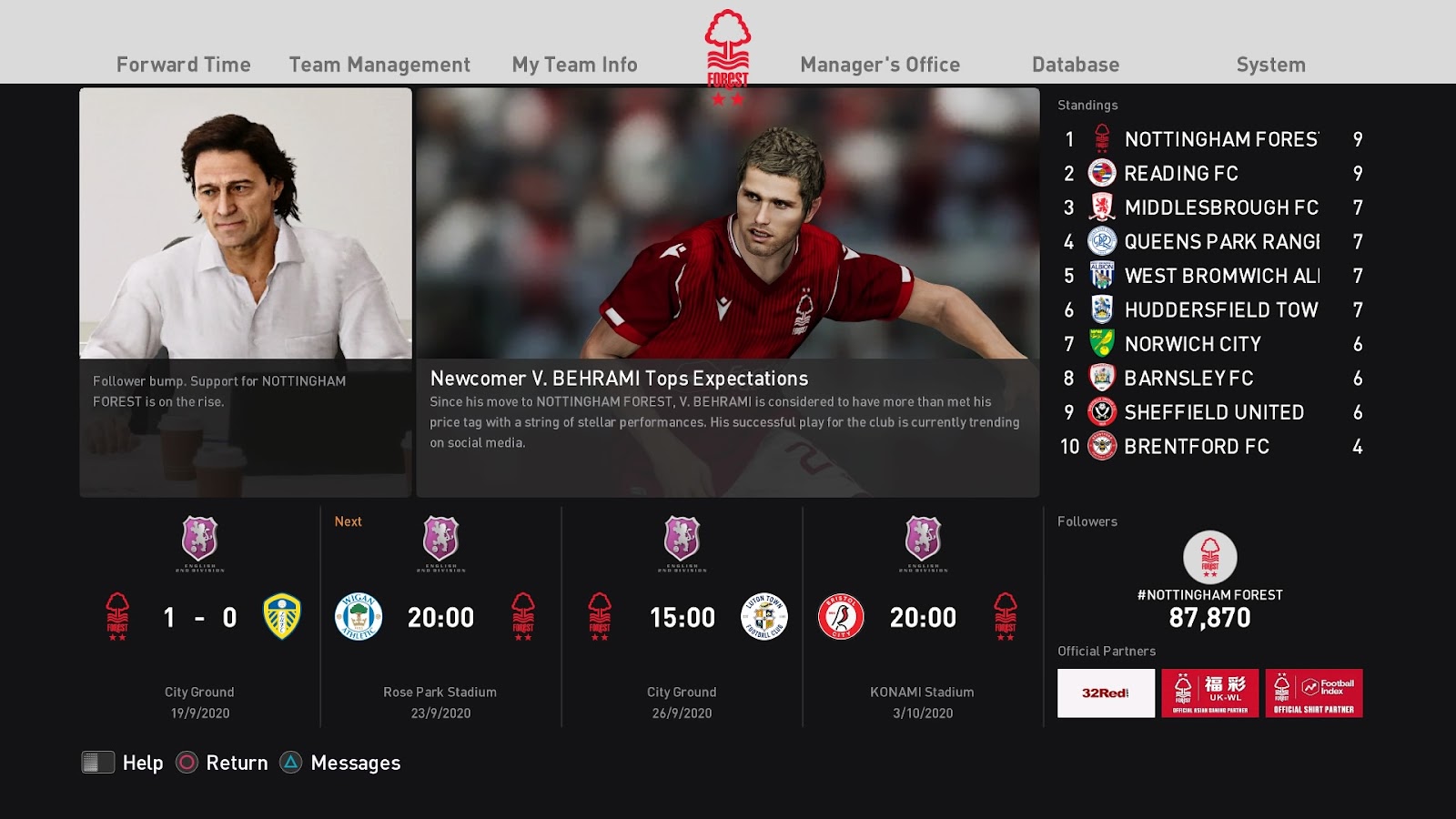 The new menus are still unintuitive though the messages facility is very welcome. Also, look at how good the very first option file is. Competition logos have since been added.

The Master League improvements, while not as groundbreaking or game-changing as they could be, will suck you in like a Dyson. The most obvious change is the addition of high-quality cutscenes in which your chosen manager discusses various matters with your staff. These mainly add colour and I found myself watching the majority of these across two seasons of Master League.

Some of these come with dialogue that may or may not have not have any effect on your game. Scenes like choosing a league ambition or whether or not you will play a new signing will affect your finances or that player’s affection respectively depending on how you follow up your word. You can also set yourself  targets during these talks or press conferences – succeeding will raise your following. 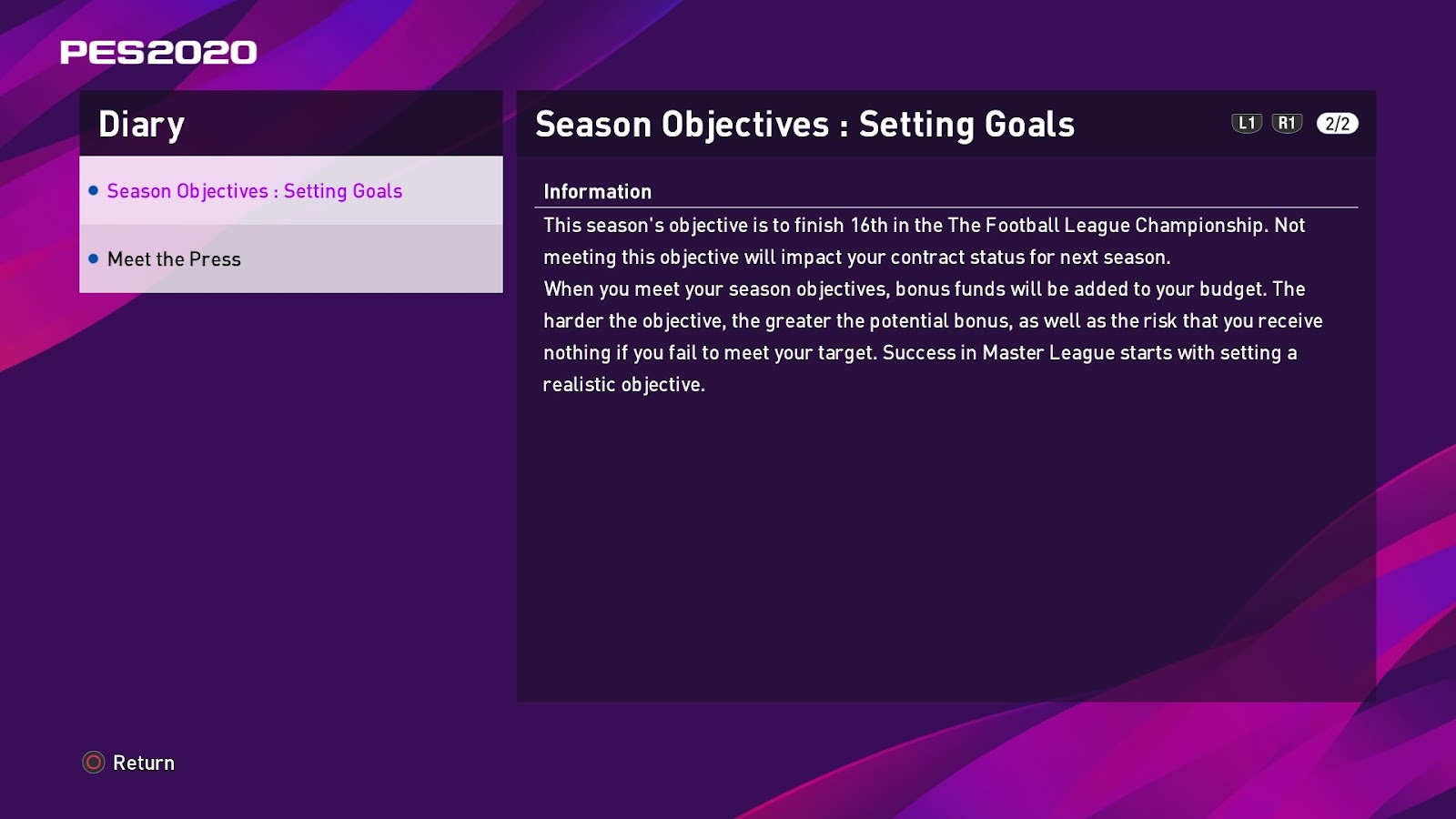 The game has the decency to explain whether or not your latest dialogue did anything.

The followers mechanic is another small detail that fosters immersion. No longer will Kylian Mbappé sign for Stoke just as they get promoted – you will need the profile to do so.

Even though these scenes aren’t used to their maximum potential, their is some useful info in there and there is a good variety in the accompanying text. They aren’t overused either and won’t ruin the game flow. Players can always check previous dialogues and what each one meant – a useful touch.

Another of these touches is the addition of a mailbox – keeping tabs on the series’ many pieces of news and messages used to be a struggle when some of these disappeared as soon as you hit Next. 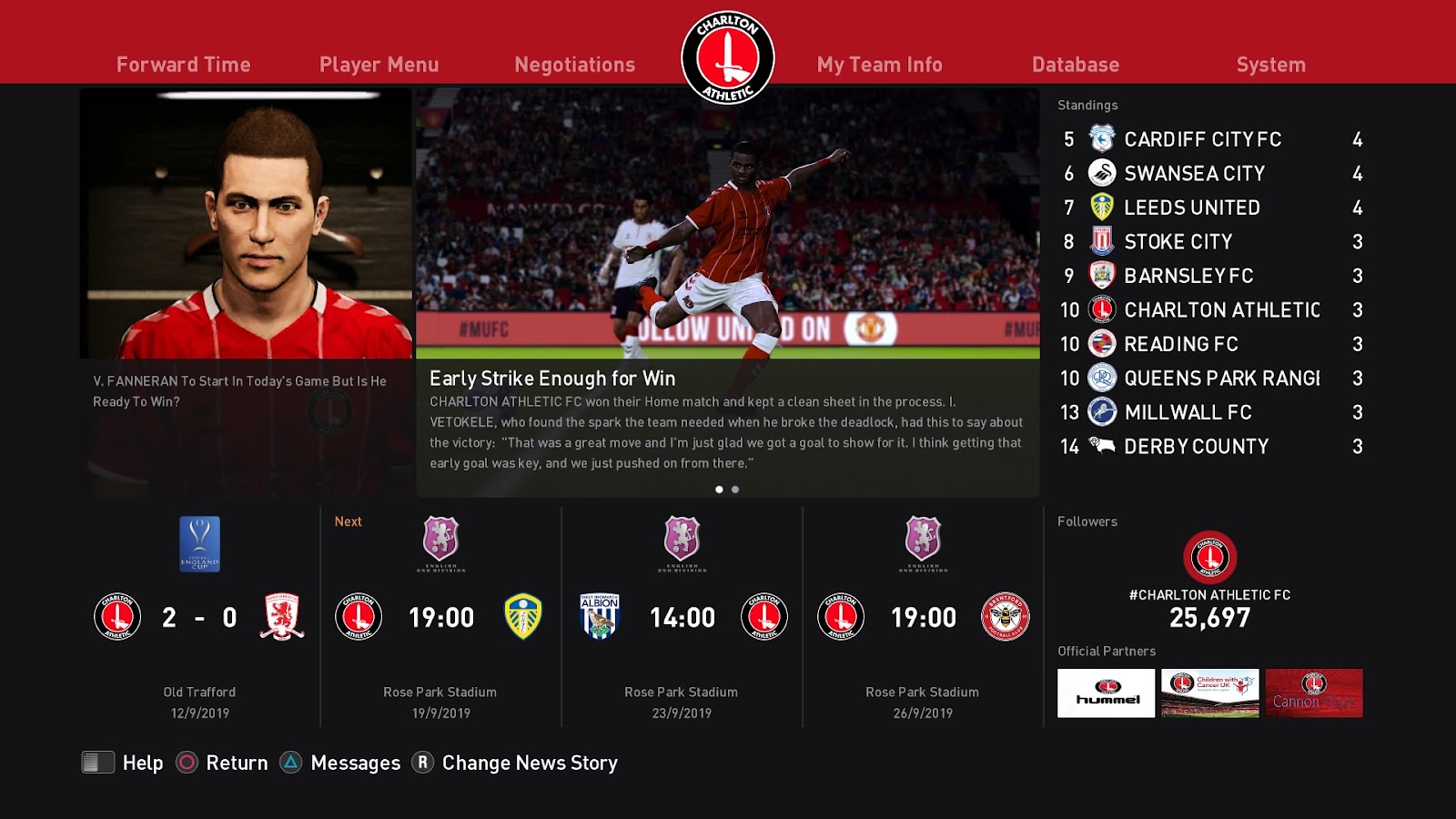 eFootball PES 2020 brings back a few options to adjust the Master League to your liking. You can now adjust AI transfer frequency and your budgets and smaller stuff like whether your wage budget is shown in annual or weekly figures.

One very small change that will delight puritans is the addition of audio commentary names to the Master League default players. It was an odd hole in the commentary that is now filled.

Last year the series improved its online match experience, reducing lag and making interruptions and dropouts rare. This year the game handles well online while giving you more reason to do so. MyClub doesn’t see any huge changes but rebalancing manager costs and adding a new type of featured player are welcome. 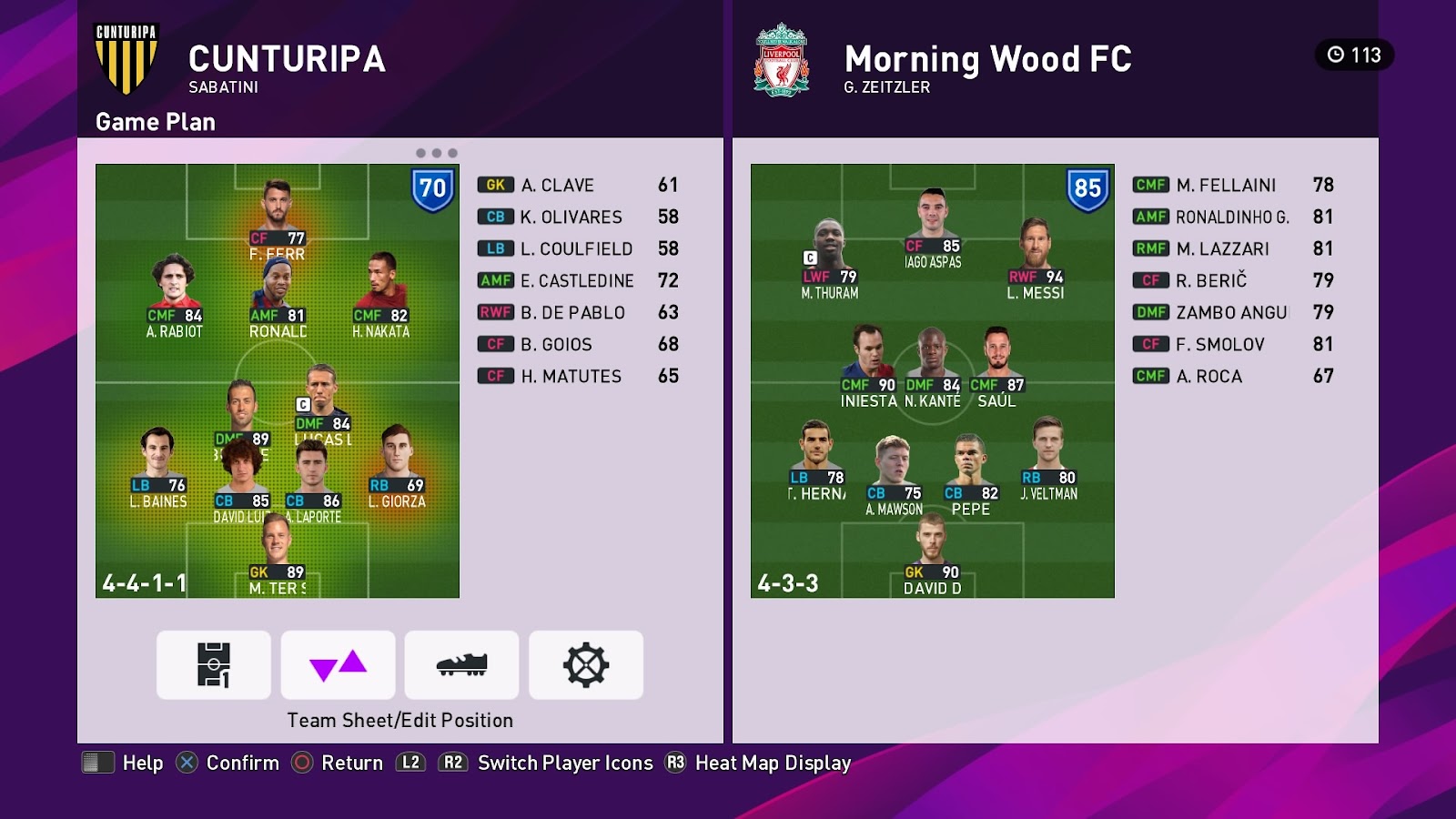 Formations are still tied to managers but managers have much higher baseline management points. You won’t have to spend precious MyClub points just to play an above-average side – most managers can handle several black-ball players.

National teams now have featured players dedicated to them. With Euro 2020 next summer and some qualifying still to be done, it’s a good time to add some quantity and variety to the featured signings.

Instead of certain signing coming in at their real-life ability at level 30 and others starting below real-life stats at level 1 – all signing now arrive at level 1 which represents their ability outside of the game.

The changes aren’t huge but making the game mode easier and less restrictive is always welcome. 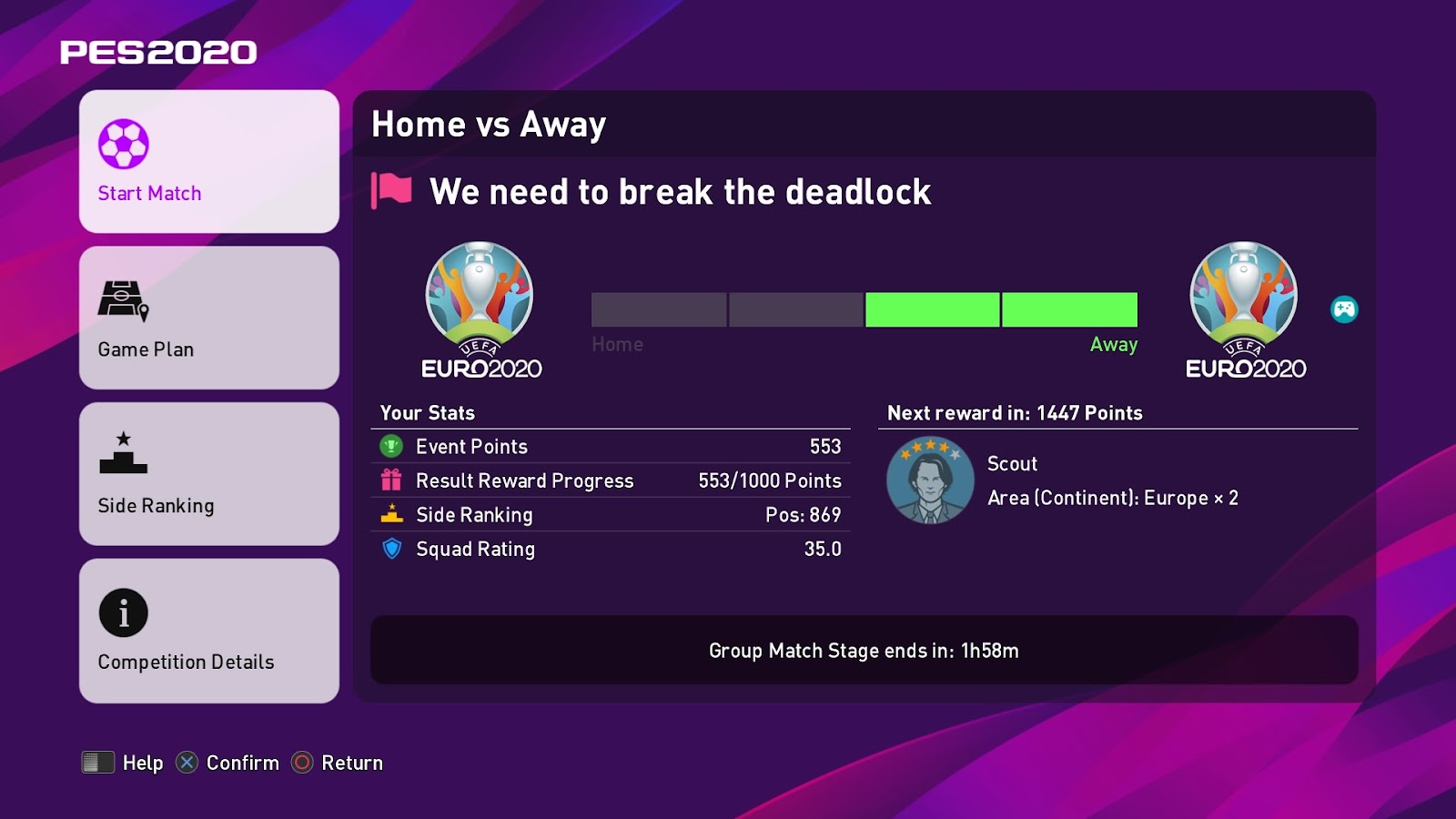 Matchday is simple but effective – I was itching for the competition to open.

Matchday is the biggest online change and despite its modest premise, it’s a lot of fun. Konami picks a theme or derby and for three hours a day players can log in and gain points for their chosen side. The points are based on the teams chosen – better teams get fewer points for their results etc. The players with the highest points for each side at the end of the day play off and Konami offer the chance to spectate the grand final. Gathering points will give also give players individual rewards like MyClub agents or currency. Spectating the grand final will give you a little bonus too.

eFootball PES 2020 takes its exacting and demanding engine and adds more variables and more things to worry about. Any of these changes on their own seem minor on paper but on the pitch it’s a whole new game.

The AI needs to be fixed. Goalkeeping cock-ups and awkward loose balls do undermine the excellence elsewhere but this will be patched when enough of PES’s dedicated fans demand it so. The option file community outdid themselves this year with detailed kits, crests and even entire leagues ready from launch-day.

Master League’s improvements are just about enough to freshen the game up for repeat players while those who are sick and tired of EA’s shenanigans have more reason to jump the fence beyond Pro Ev’s gameplay.

eFootball PES 2020 is available now for Xbox One, PS4 and PC.