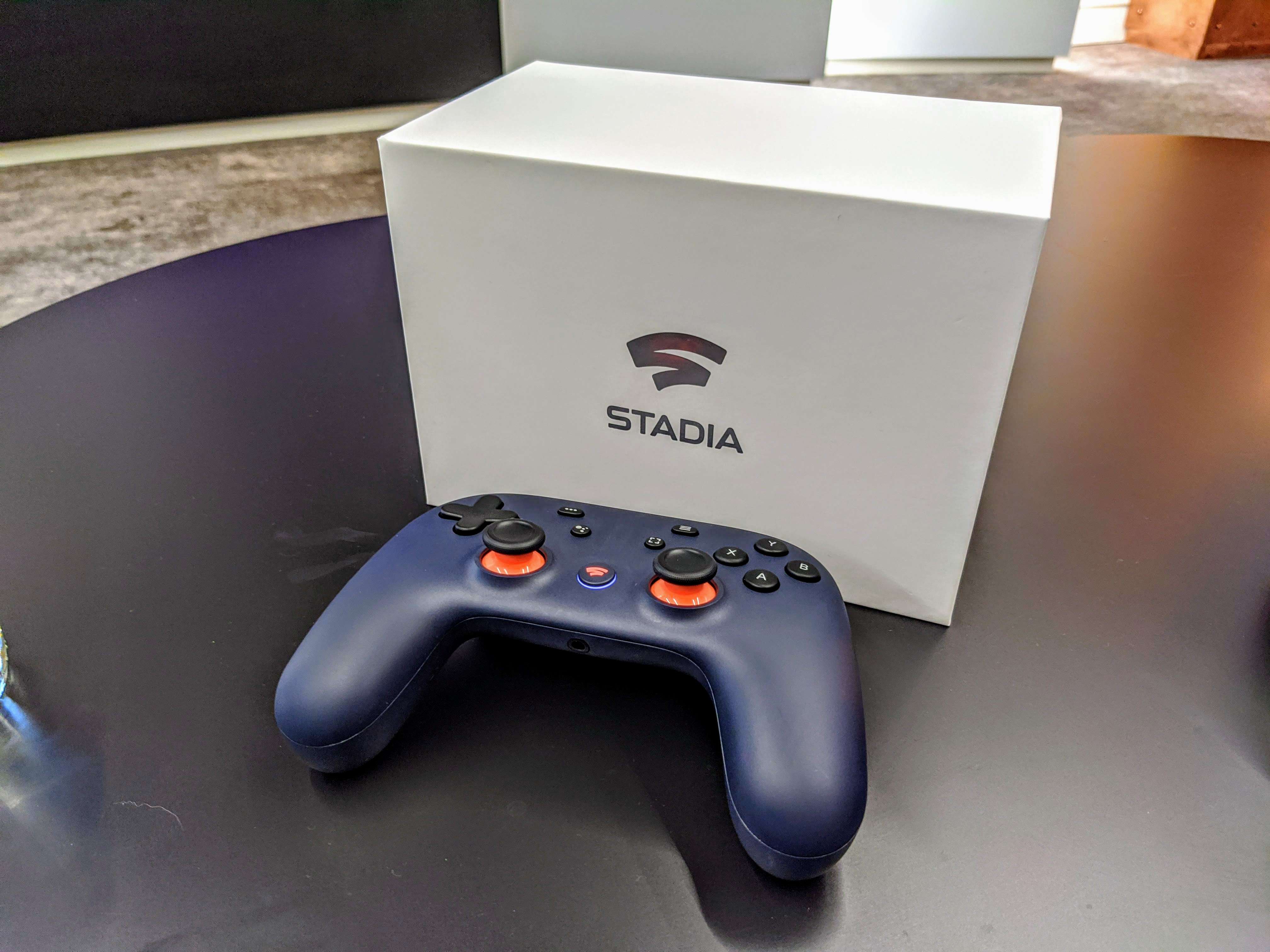 PREVIEW: Google Stadia – Is this the future of gaming?

Google Stadia’s launch is almost upon us with the new game streaming service coming to Ireland and 13 other countries tomorrow. Officially announced back in March at GDC, Google’s entry into the game streaming business has had an interesting journey, to say the least. Having had a chance to sit down in Google’s HQ in Dublin to test out Stadia for myself, I’m impressed by the technical capabilities of the service first and foremost. Streaming Red Dead Redemption II worked without any sign of framerate drops or low fidelity visuals. 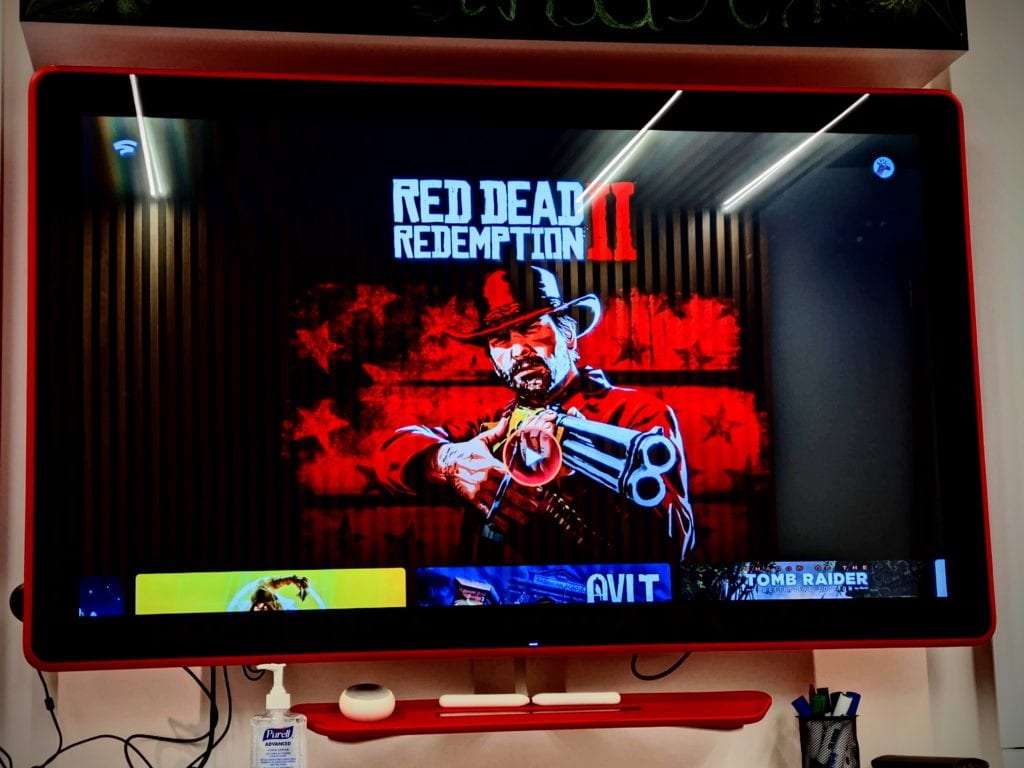 Admittedly, I was playing on a less than ideal display but, using the new Stadia controller (in Founder’s Edition Midnight Blue) response times never caused an issue. Speaking of which, the controller itself feels great in the hand and is well balanced over all. You can think of it as a cross between the Xbox One controller and the Nintendo Switch Pro controller. 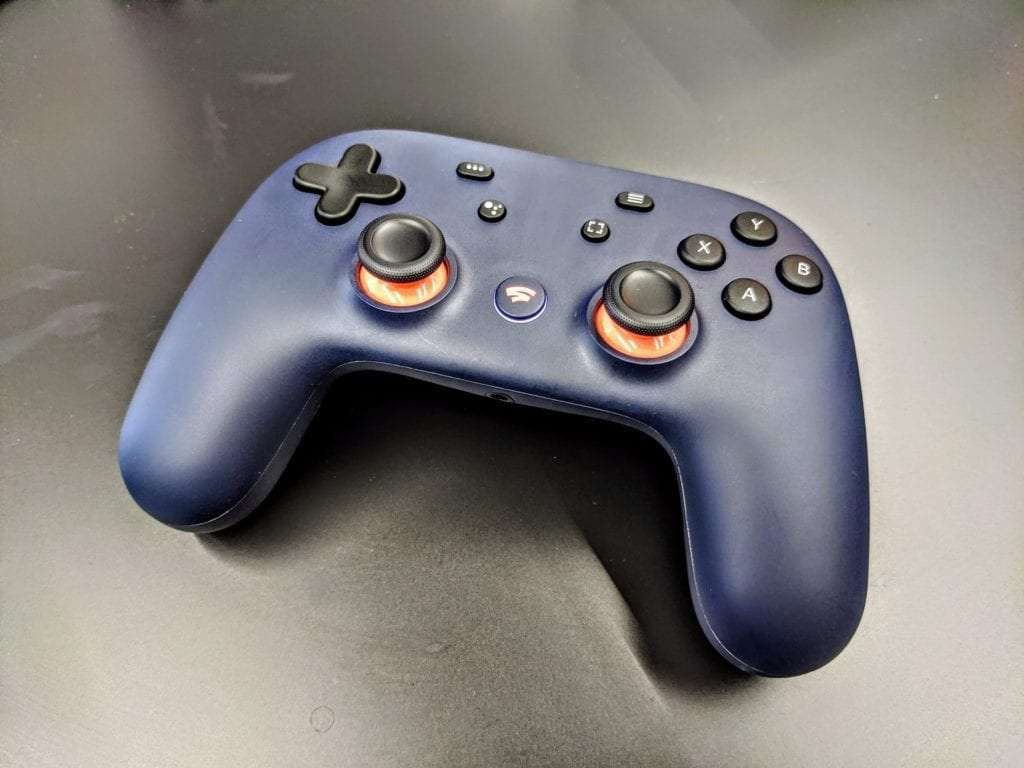 Buttons are responsive and the trigger buttons are well calibrated with just the right amount of tension. As any gamer knows, getting the controller right for any gaming experience is critical so, thankfully, Google has really nailed the design and construction for their first attempt at a games controller. It’s also charged and connected via USB Type C which is great! 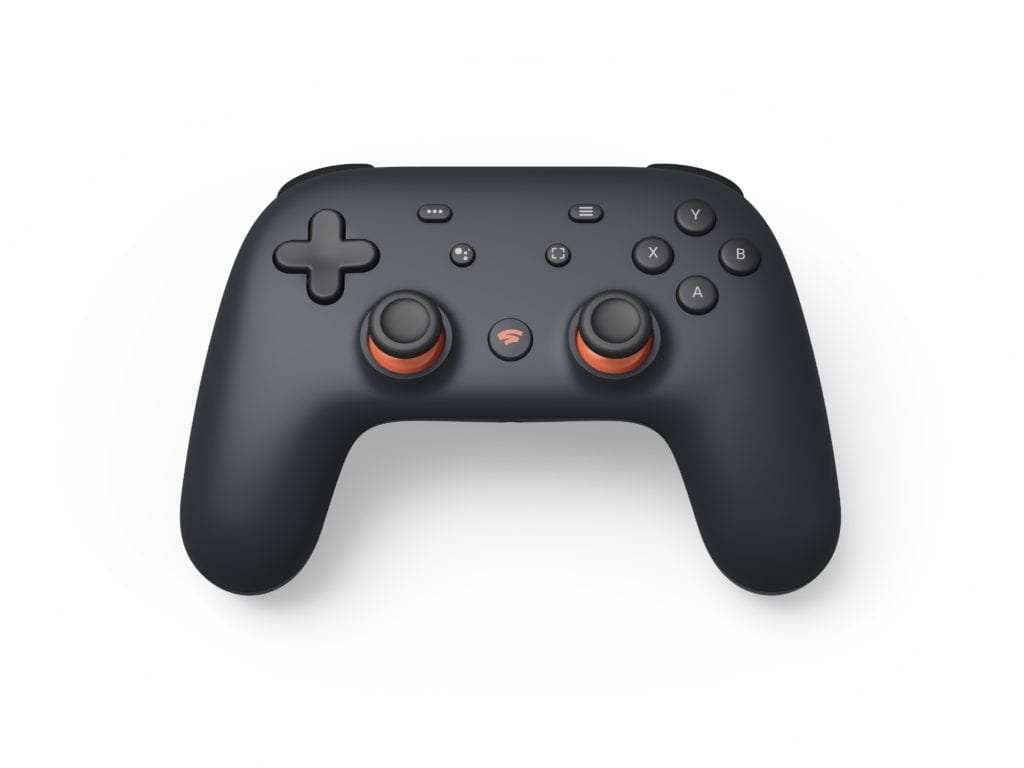 Jumping into other titles I was able to test, NetherRealm Studio’s more action packed Mortal Kombat 11 worked pretty flawlessly and response times felt as instantaneous as I could tell but, I obviously didn’t have a high speed camera to actual tell what the millisecond latency times were for something as fast paced as this. I imagine the team over at Digital Foundry will have a comprehensive breakdown of these stats pretty soon though!

Red Read Redemption II and Mortal Kombat 11 are two of the now 22 titles that are launching on Stadia on Tuesday November 19th, with Phil Harrison, Vice President and GM at Google, tweeting about the last minute addition of 10 new titles to the service for launch day.

Excited to announce that we are INCREASING the Day One launch line-up of titles for @GoogleStadia – we now have TWENTY TWO games launching with the platform on Tuesday. Huge thank you to our game developer and publisher partners for bringing more titles #stadia

Here’s a full list breakdown of the titles coming at launch; 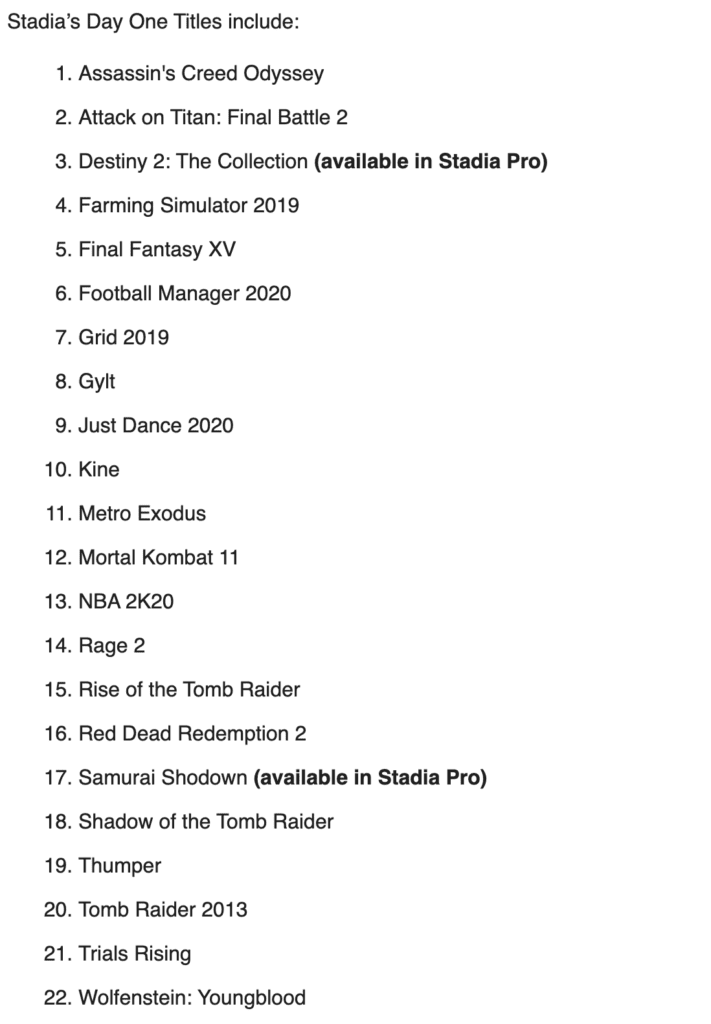 I also got the chance to shift Red Dead Redemption II from the big screen over to a Pixel 3 XL which was mounted in the new ‘Claw’ like device for holding the phone above the controller while you play. This is expected to be sold separately on the Google Store but we’re still waiting on the exact RRP.

As many of the other gaming sites have covered, it’s also now known that you must wire the controller to the phone to carry on your gaming session as wireless support isn’t available at launch just yet. Still, playing Rockstar’s Wild West epic on a smartphone felt pretty damn cool and, again, the visuals look great with response time still holding up just fine.

Speaking of features coming down the tracks, as of launch day tomorrow, you also won’t be able to use the built in Google Assistant button on the controller, party mode, Buddy Pass system (for sharing access to the service with a friend for 3 months) and a few other features as they’re expected to be rolled out over the coming weeks and months.

Finally, I got a chance to play the new Stadia exclusive title, Gylt, from the guys in Tequila Works and, having not really read much about this particular title, I was really impressed by the clean visuals, (almost Pixar like) eerie soundtrack and simple to use control mechanics. Unfortunately, I didn’t have too much time with this game but from the brief bit of gameplay I did get to try, I was definitely excited to play more which is a good sign for the one and only exclusive Stadia title available at launch.

As of writing, if you head along to the Google Stadia Irish store, you can still pick yourself up the ‘Premiere Edition’ which will give you a white Stadia controller, a Google Chromecast Ultra (which is running the latest firmware to allow Stadia streaming – current consumer models need to be updated) along with 3 months of Stadia Pro. 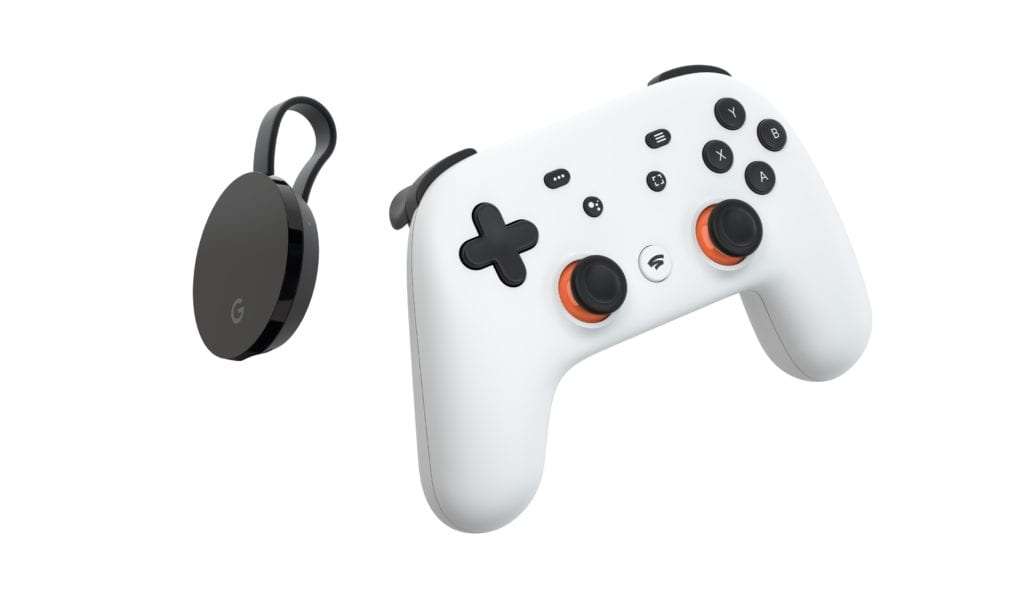 It’s this Pro subscription, which comes in at €9.99/month after the 3 month promo access, that will allow you to play games up to 4K 60fps HDR with 5.1 surround sound (on the Chromecast Ultra and 4K Display) and will also give you access to Destiny 2 with all its DLC along with the newly announced Pro subscription free title, Samurai Shodown.

Coming in 2020, Google will be launching a free ‘Base’ plan which will allow you to head onto the Stadia Store, buy a title (with exact pricing for each of the games TBC yet) and stream it in up to 1080p, 60FPS and stereo sound. 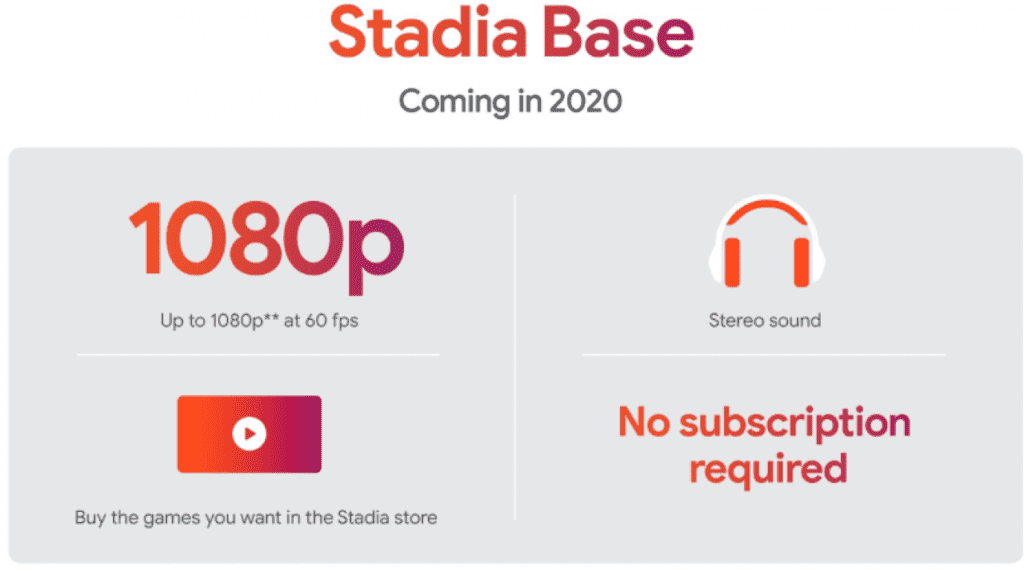 Users who did pre-order either the Founder’s Edition or the new Premiere Edition can get ready for their delivery by downloading the new Stadia app to their Pixel phones (if they have one) as these are the only handsets that support Stadia for launch but Google have promised that, quite obviously, the service will be able available on other handsets soon.

Having spent the morning getting to test the service out, jump from the TV screen, to a Pixel 3 XL and back again, I was definitely impressed by what Google are pulling off here. Yes, Microsoft are trialing their own Project xCloud streaming service and Sony’s PlayStation Now has been around for years at this stage but this is the first, full on public launch for a game streaming service and it just so happens to be Google that are behind it.

Streaming AAA titles in 4K 60FPS HDR from the cloud is a far cry from PlayStation Now’s and Microsoft’s Project xCloud 720p/60FPS stereo set up so Stadia definitely has the upper hand here when it comes to visual fidelity and audio prowess anyway.

Questions around who the actual target audience is and what Google support of the service will be like in 5 years are another article altogether but, right now, Google are doing something pretty impressive, from a technical standpoint anyway, so any developments in the gaming world that lead to innovation, I’m all for!

Now, all they need to do is make damn sure they don’t kill this off before it has time to grow into something truly special!