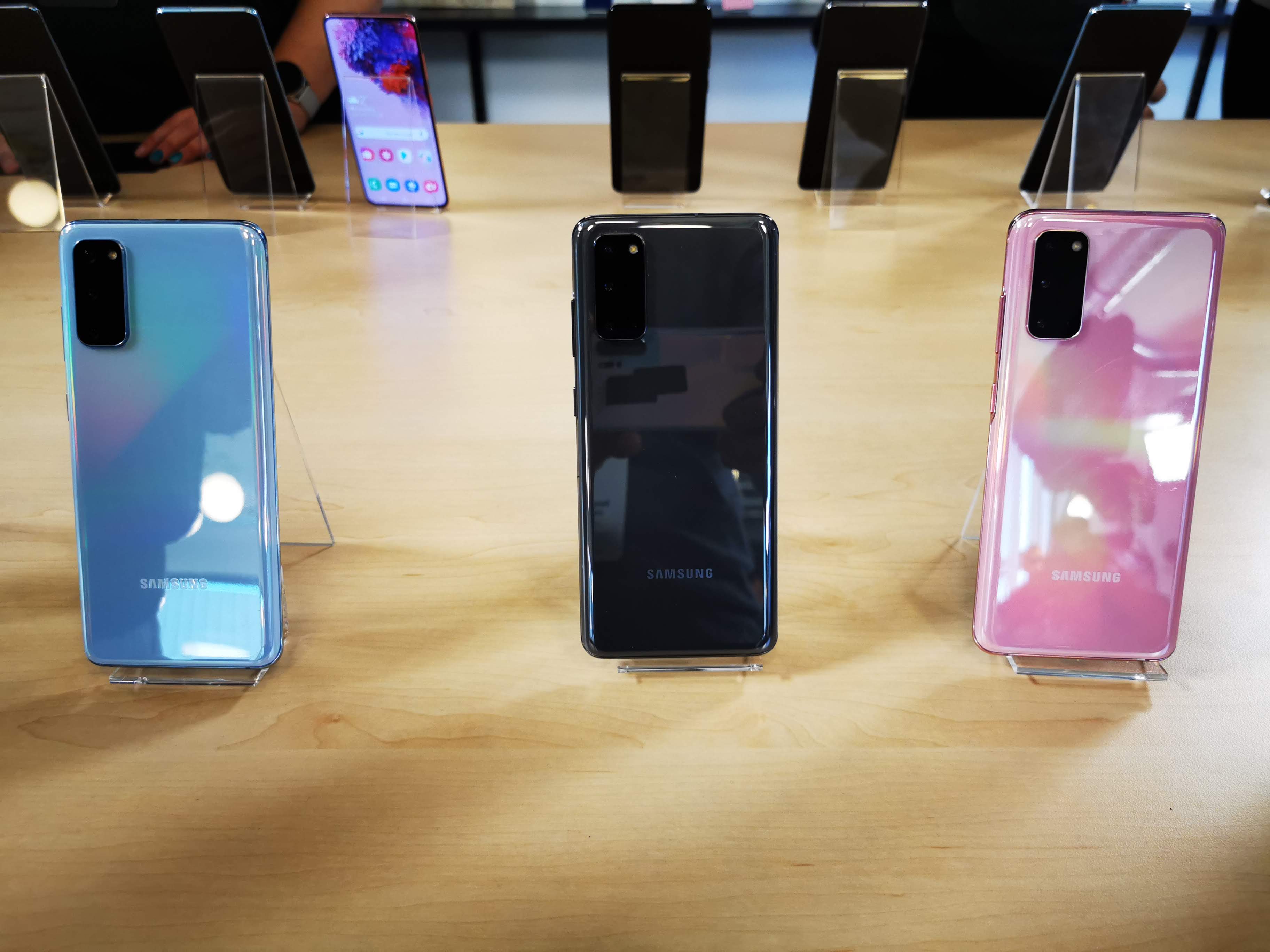 Samsung has just unveiled their latest trio of Galaxy S smartphones, the Samsung Galaxy S20, S20+ and S20 Ultra. Why the jump to S20 and not S11 after last year’s S10? We were told it’s to showcase the leap in technology in relation to the camera technology being used in all 3 devices and it’s also, coincidentally, to line up with 2020! 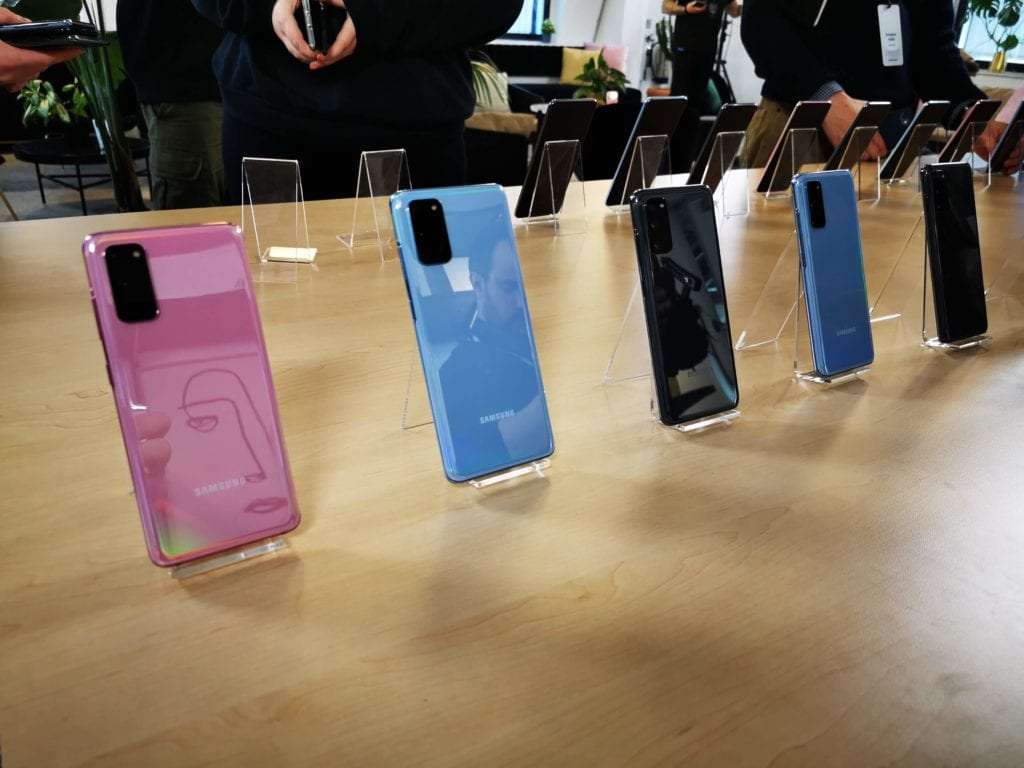 Having had the chance to play with each of the handsets at a special pre-briefing event in London last week, the new handsets really showcase Samsung’s strengths in display technology, camera credentials and all round feature-packed devices. Before we get into our full hands on impressions, here is a breakdown of each of the 3 handsets specs: 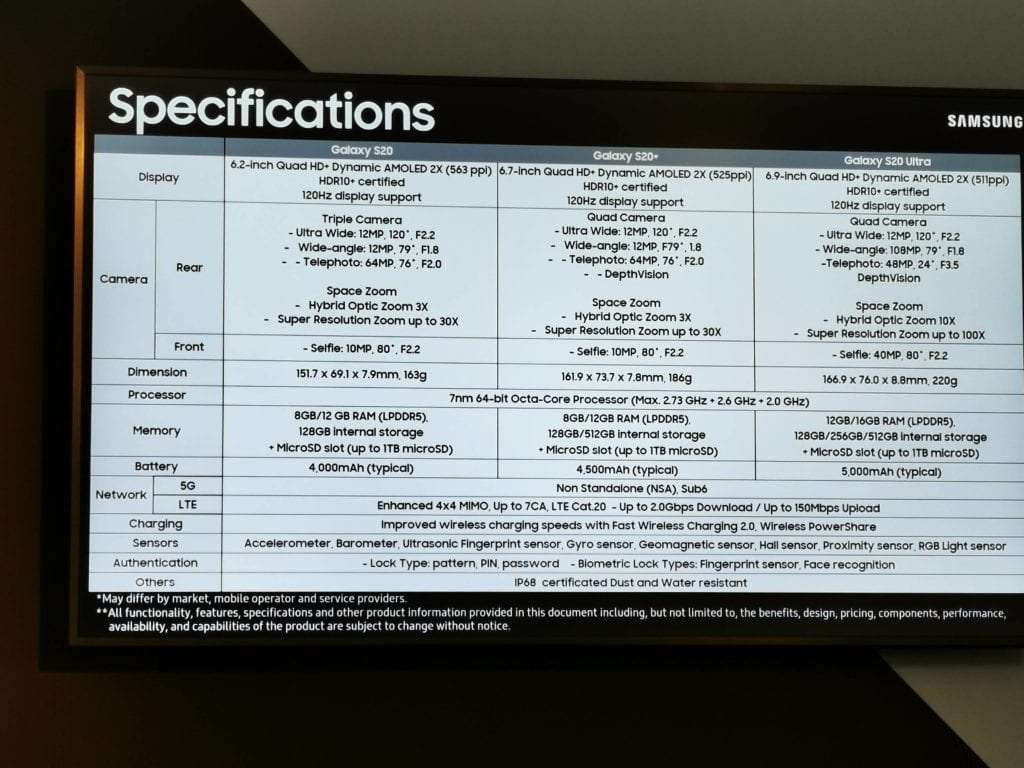 Starting with Samsung’s newest flagship S device, the new Samsung Galaxy S20 Ultra is a showcase for all of their latest and greatest display and camera technology. Differentiating the Ultra from the smaller S20 and S20+ is its larger 6.9inch Quad HD Dynamic OLED display but all 3 models supports Samsung’s new 120hz refresh rate along with 240hz touch response. 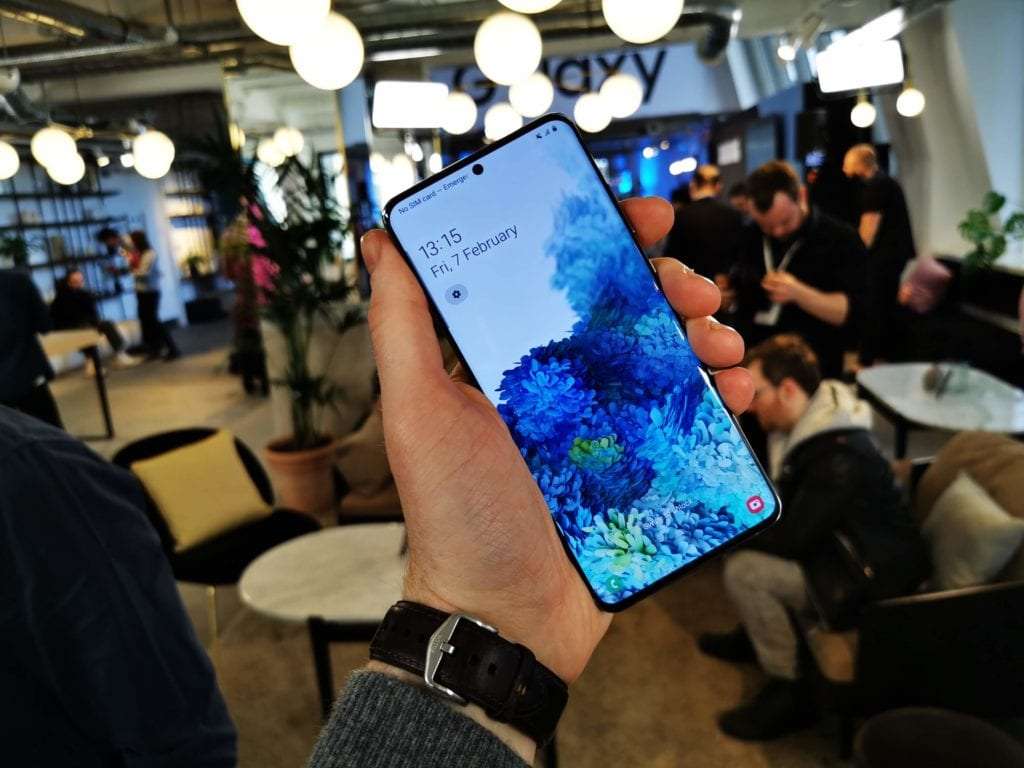 When you combine these two features, these new handsets are some of the smoothest scrolling phones we’ve ever used. One caveat for this new refresh rate though is that the screen’s resolution needs to be dropped to HD+ so, unfortunately, no 120hz/Quad HD+ scrolling.

The other standout feature for the S20 Ultra are its cameras. If you’ve been keeping up with the leaks for this handset in particular, you’ll have seen the rumours of a camera module packing a monstrous 108MP sensor and 100x ‘Space Zoom’.

Now that the phone is official, we know the leaks were true and Samsung have indeed packed an enormous 108MP sensor into their Ultra model along with the ability to zoom digitally up to 100x. 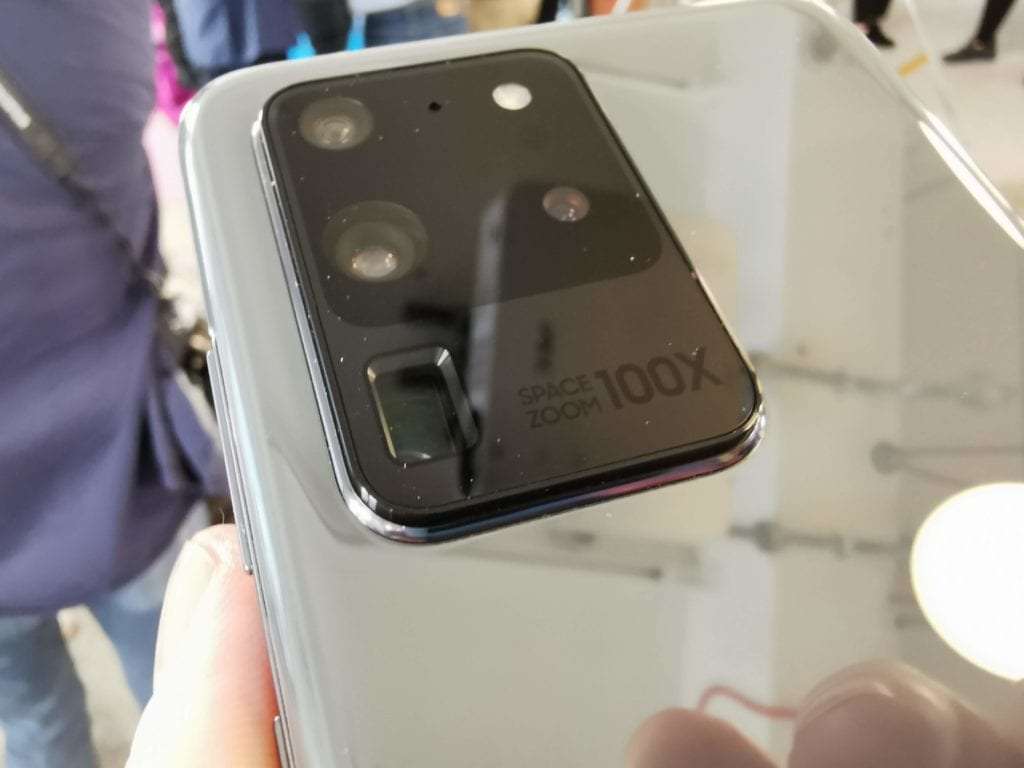 Samsung told us this ridiculous level of zoom was achieved by a combination of Hybrid Optic Zoom and AI Powered Digital Zoom. Having played with an Ultra model mounted on a tripod and zooming all the way in on two miniature figures on the other side of the room that were barely visible to the naked eye, this feature really is quite the party piece but we’re not entirely sure who’d actually use it in their every day life.

When it comes to the camera arrangement for the S20 & S20+, from the specs above, you can see that they will be pretty much the same. Both will come with a 12MP main sensor. The secondary ultra-wide camera will also be 12MP sensor as well. For the telephoto lens, Samsung has included a 64MP sensor with 3x zoom and up to 30x digital zoom. 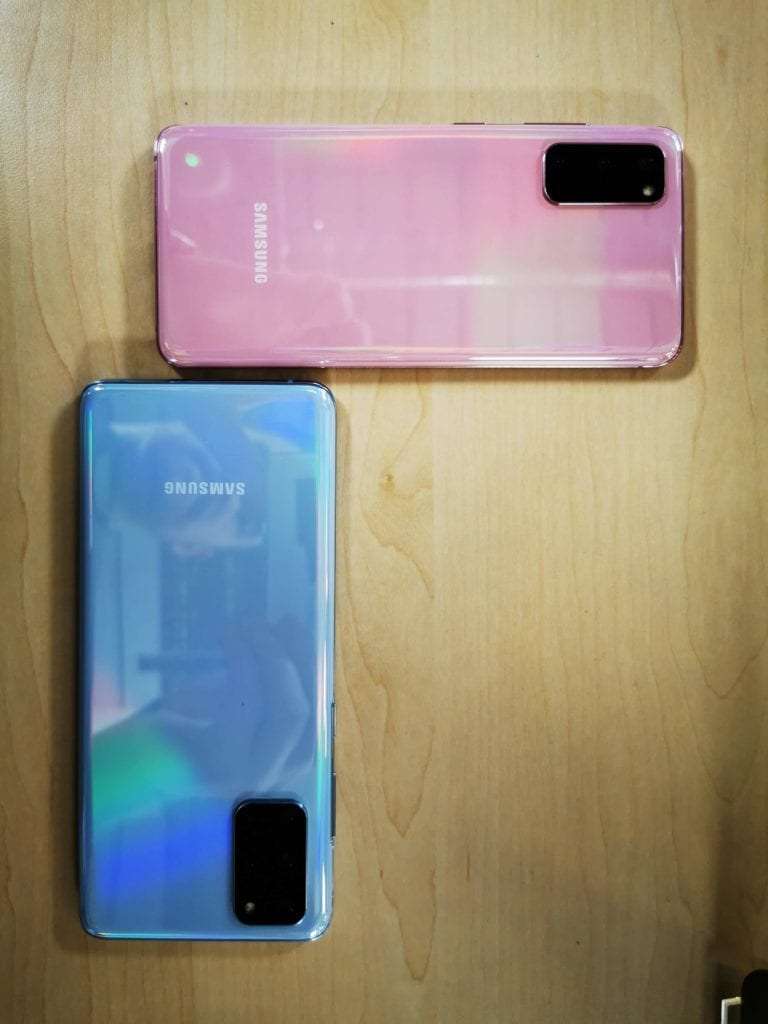 The only real difference between the two devices is the inclusion of a Time of Flight (TOF) or ‘DepthVision’ sensor in the Galaxy S20+ model. This will help for better bokeh and portrait shots.

Unfortunately, these new smartphones will be the first Galaxy S handsets to come without a headphone jack. Like last year’s Note10, you’ll no longer be able to plug in your 3.5mm cabled headphones into these handsets.

The new camera set up is also capable of recording in 8K/24fps and, because the video has such a high resolution, you’re capable of capturing still images up to 33MP from video content. 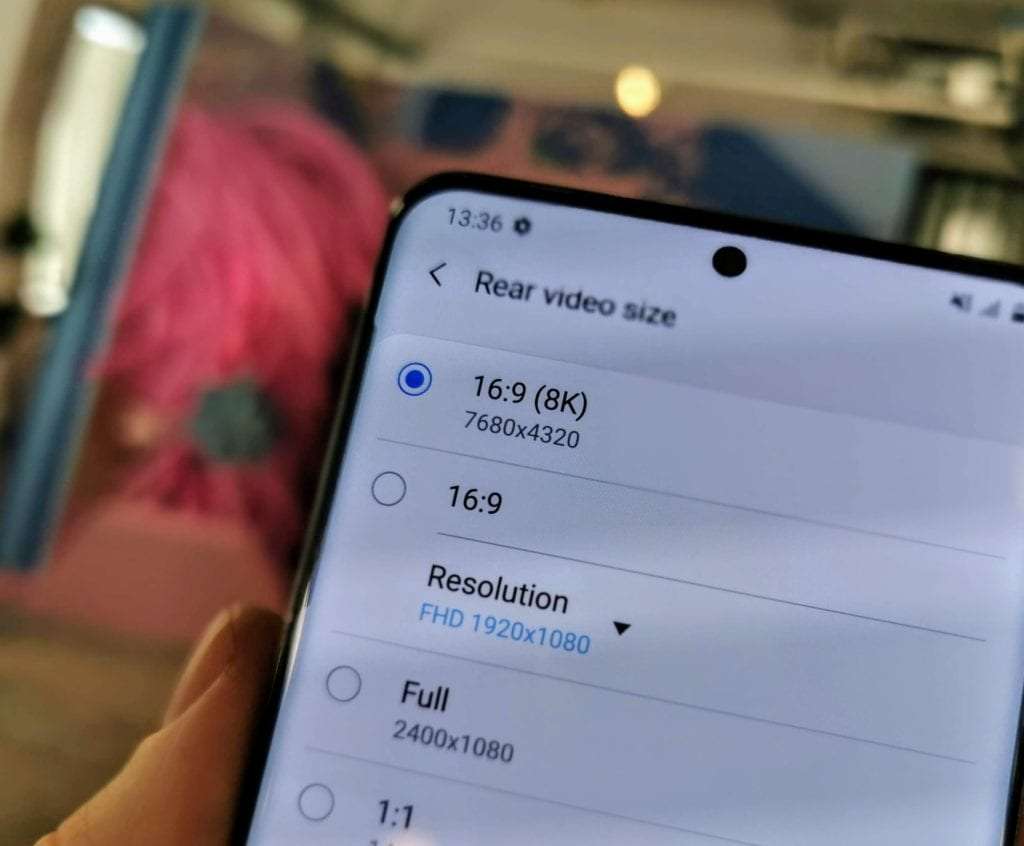 Samsung has also improved the low light video capabilities of their new handsets with the ability to capture night time hyperlapse videos which, from the footage we watched at the event, looked spectacular.

Now, you may be asking, how much space does 8K video take up on the device? We managed to record 30 seconds of footage and it came in at nearly 300MB so it’s probably a good thing that all 3 models come with a minimum of 128GB of storage. 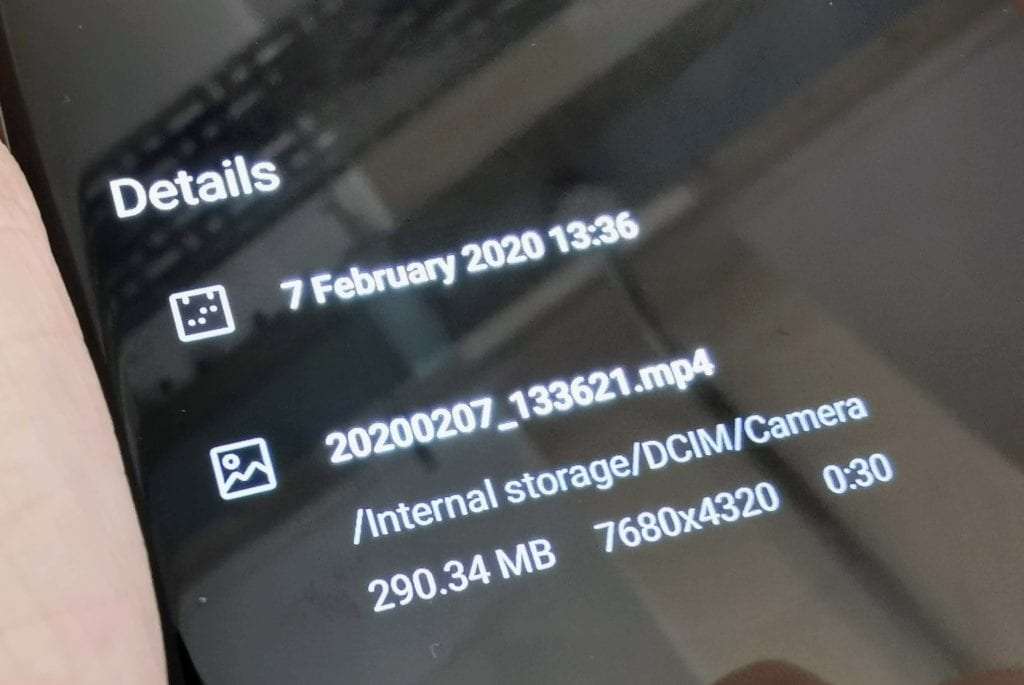 Once you’ve captured your 8K footage, Samsung told us you’ll be able to share it to YouTube, which supports 8K uploads, or stream it to one of their new 8K QLED TVs, if you’re lucky enough to have one at home, obviously.

With all of this extra camera horsepower and the improved optics, Samsung felt they should include a feature to help everyday smartphone photographers get the most from their new set up. 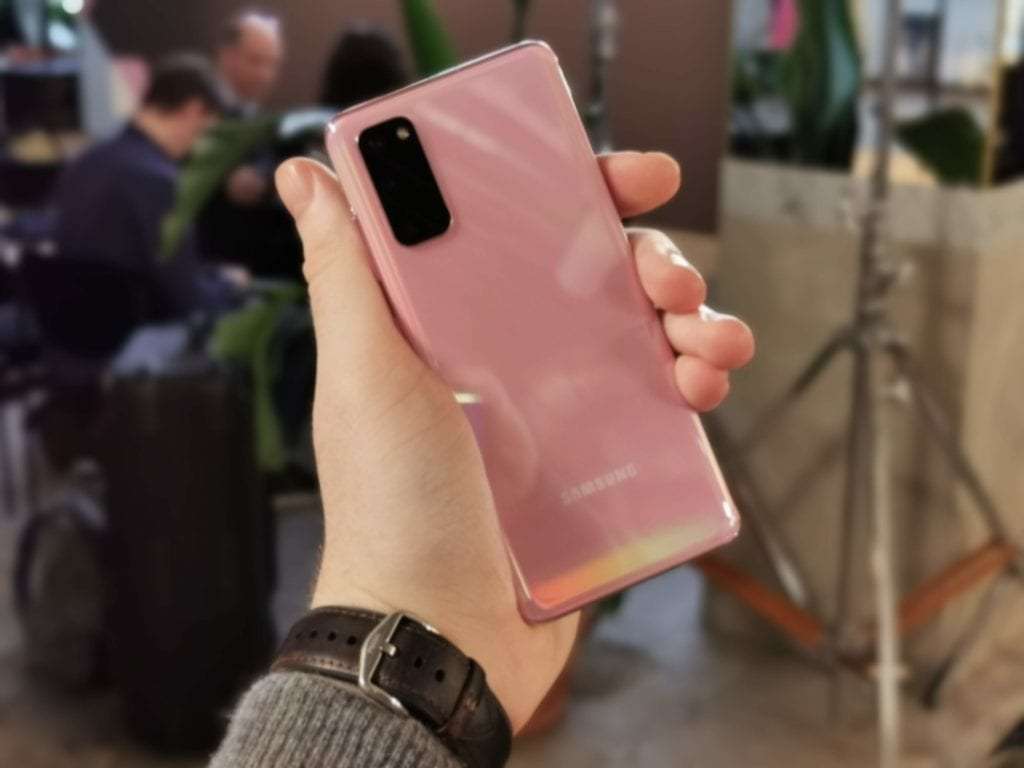 ‘Single Take’ will allow users to simply hold their phone up in front of a scene and just move it around slightly to allow it to capture as much info, faces, action as possible and, once finished, let you choose from a wide range of automatically captured photos and videos which are, more often then not, nicely laid out and quite impressive in their own right.

This should free up a lot of people’s time when trying to capture everything with the various cameras, be it wide angle shots, normal straight up photos or more zoomed in images.

To continue their push to bring as many 5G handsets to the market, Samsung has confirmed that all 3 Galaxy S20 models will have 5G variants, for those of you looking to make the move up to the next generation of mobile network connectivity.

Samsung have told us that the new Galaxy S20 handsets are available from pre-order tonight with the first units expected to arrive on Friday, March 13th.

Below is the SIM free pricing breakdown for each of the handsets.

Not to be left without a worthy companion, Samsung’s Galaxy Buds have also been improved to coincide with the launch of these new handsets. 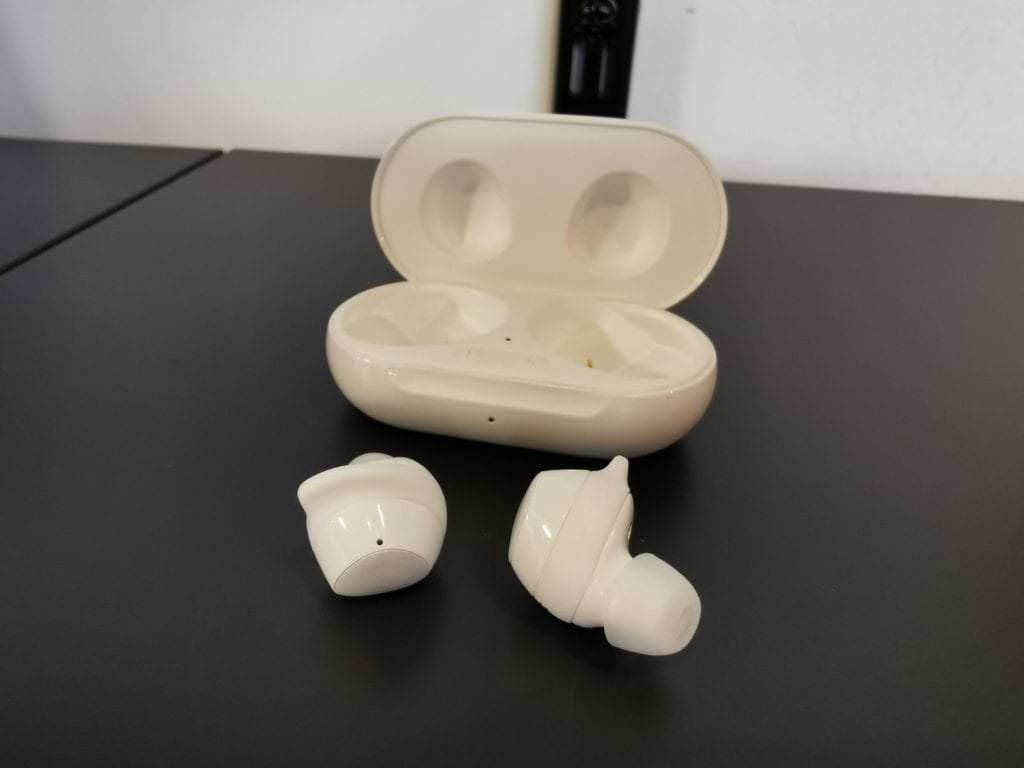 The Galaxy Buds+ have had their battery life bumped up to an extremely impressive 11 hours, compared to the original Buds’ battery life of just 6 hours. The new buds can also be fast charged for just 3 mins which will give you 60 mins of usage time. Thankfully, the new Buds’ charging case keeps its Qi wireless charging capability

Unfortunately, the new Buds still lack active noise cancellation but the overall audio quality should be a lot better thanks to the presence of dual dynamic drivers (1 woofer + 1 tweeter). For those of you who know a lot about wireless earbuds, you’ll know this isn’t something you usually see in this category so we can’t wait to test these new Buds out properly to see if it really makes a difference.

The new Buds also support multi-device connections which is a great addition for those of you who like to jump between your laptop or tablet to your phone for a call. They also come with an additional microphone in each earbud so calls should be clearer. 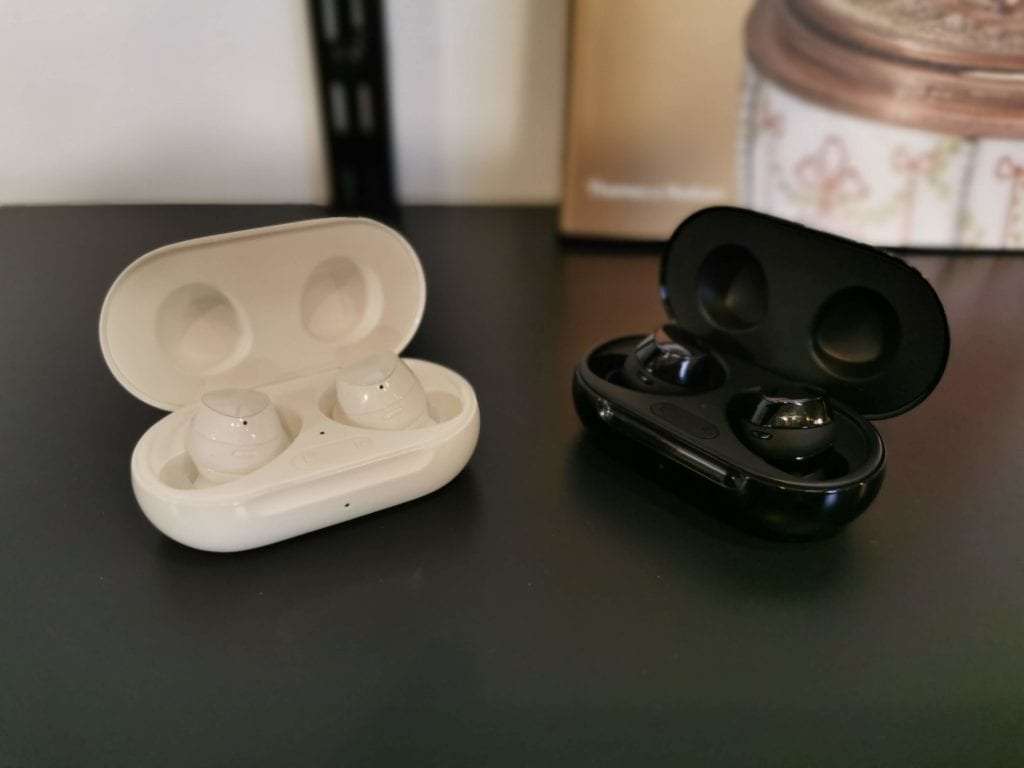 Samsung has decided to double down on their Spotify integration by adding a ‘Spotify Launch’ setting on the new buds so you’ll be able to jump instantly into your Spotify tracks with a long press.

Right now, the new Galaxy Buds+ will be available in black and white but there’s also suggestions that there’ll be blue and red variants down the line also. iOS users can also get excited because, finally, Samsung will also be launching a dedicated app for iOS devices which will allow you to control your new Galaxy Buds+ from your iPhone or iPad.

The Galaxy Buds+ will set you back €179 are available for pre-order now and are expected to start hitting shelves this Friday, February 14th. If you do pre-order either the new Galaxy S20+ or S20 Ultra now though, you’ll nab yourself a free pair.