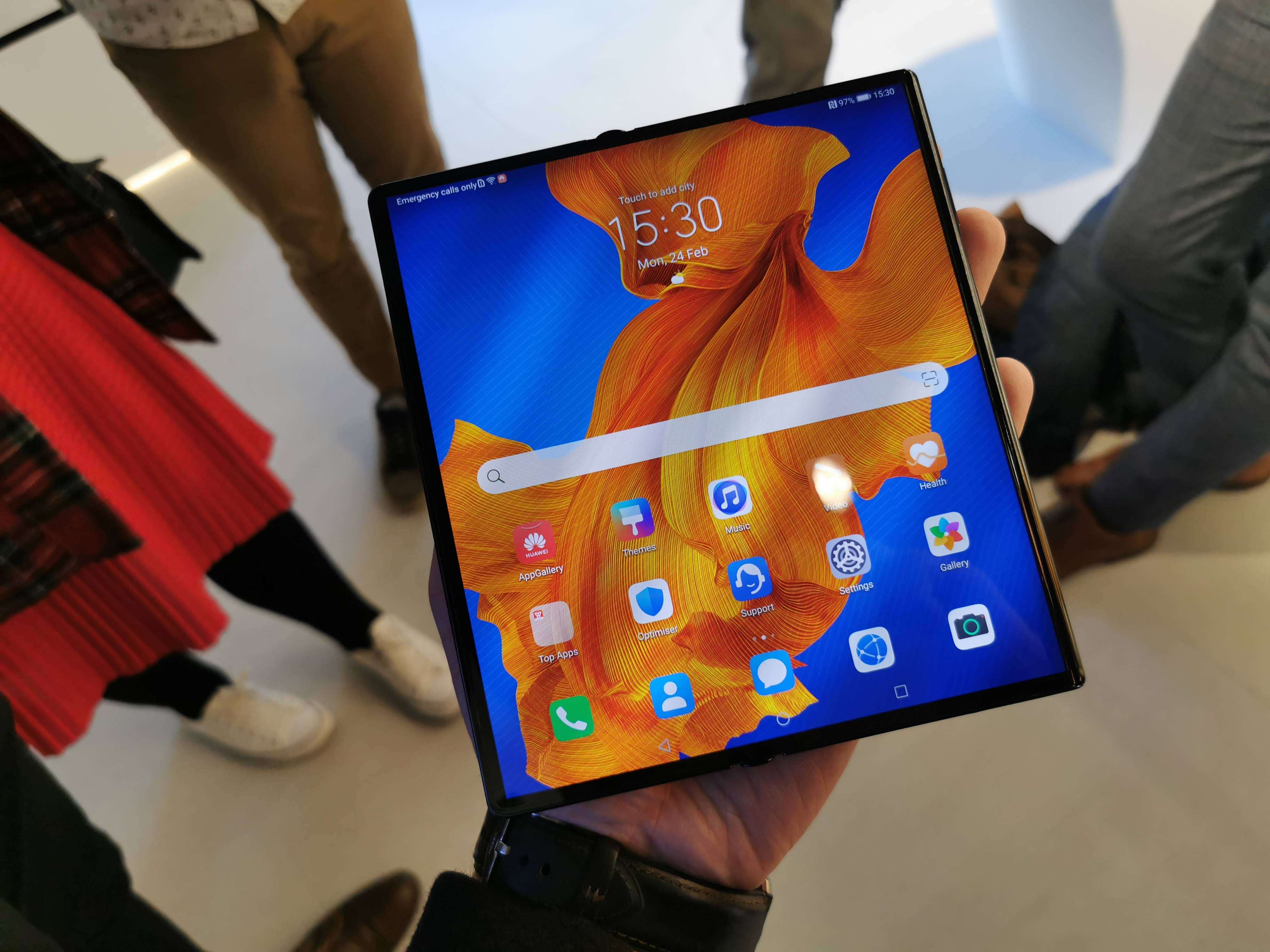 Things have just wrapped up at the official Huawei Irish media event for the announcement of the new Huawei Mate Xs foldable smartphone. This new device can be seen as Huawei’s upgraded answer to Samsung’s Galaxy Fold and Galaxy Z Flip devices and is a showcase of Huawei’s entry to the foldable smartphone category for the international market. Below are the key stats for the new device and our first impressions. 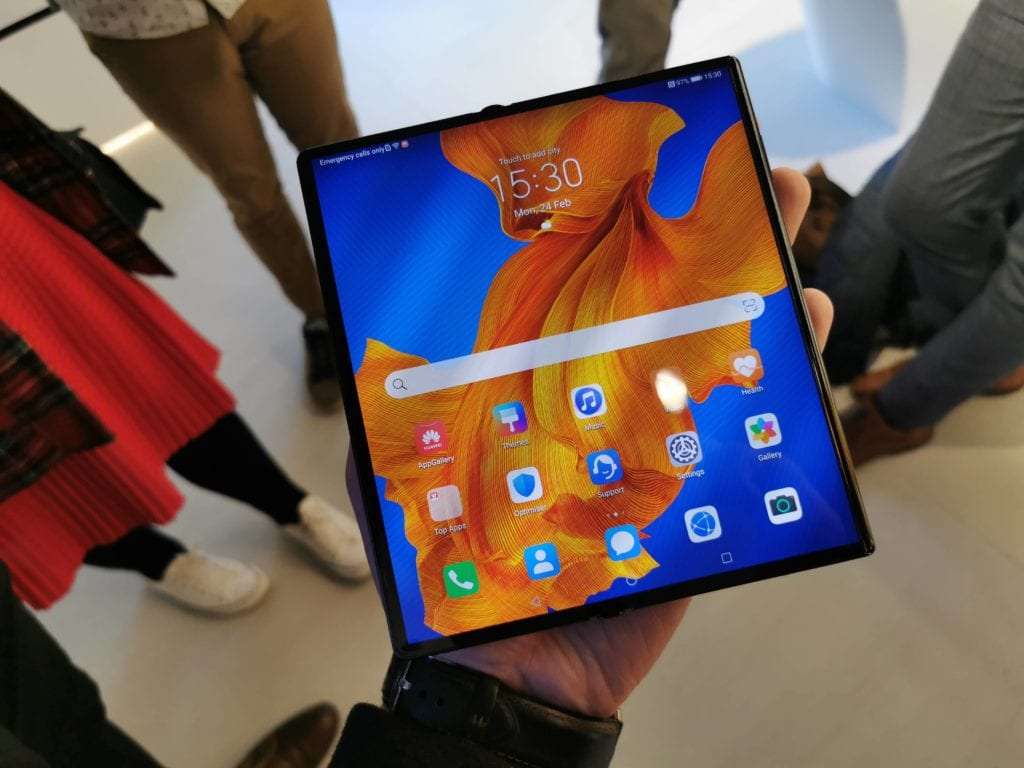 A follow-on to the Mate X which was announced at last year’s MWC but only ever launched in China, the Mate Xs is now packing Huawei’s latest 5G enabled Hisilicon Kirin 990 processor and has also improved its hinge mechanism to help try and alleviate any usability issues that might come up (cough.. Samsung..cough).

When full unfolded, the screen measures 8 inches diagonally with a screen ration of 2200x 2480 and a PPI pixel density of 414. Playing with the device, it really is a stunning display and, when fully unfolded to read or interact with photos or watch videos, its unique form factor really shines.

Here it is in the flesh, the brand new @Huawei Mate Xs – arriving next month for €2499! @HuaweiMobileIE #MWC2020 #HuaweiMateXs pic.twitter.com/cYcj4L753T

When folded up, the screen ‘shrinks’ down to 6.6″ diagonally but is still quite tall in comparison to other flagship devices on the market. Like last year’s Mate X, the right edge of the back of the device houses the camera sensors, charging port etc. and also acts as a impromptu handle when using the unfolded device one-handed. 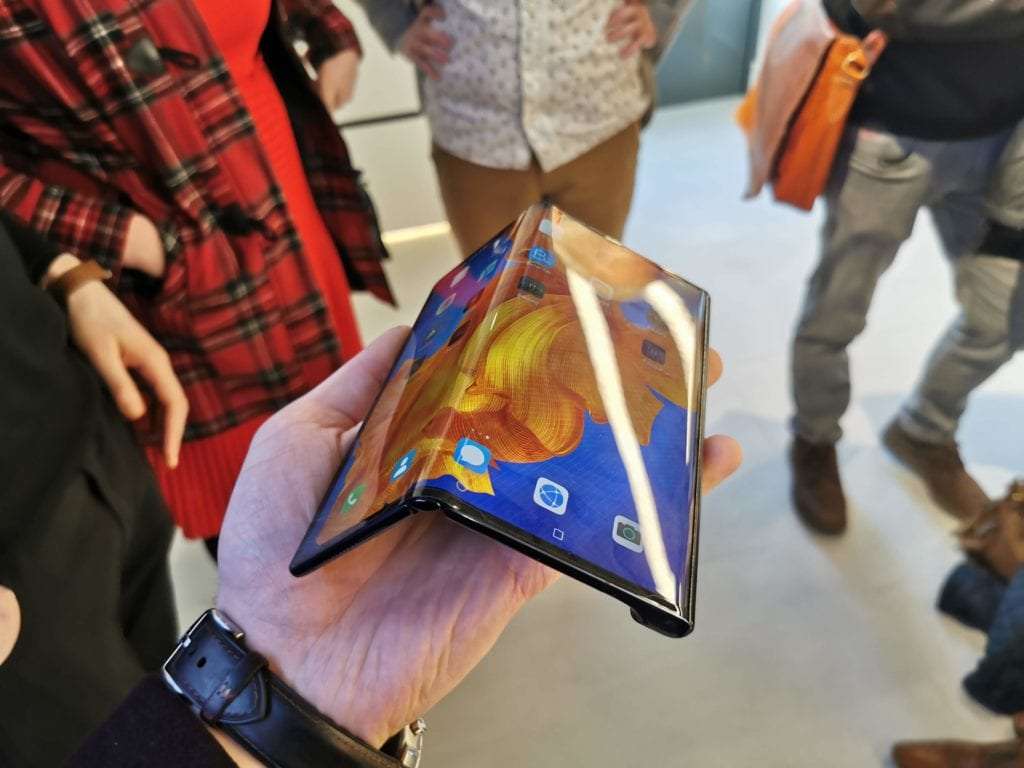 The newly improved hinge is reassuringly sturdy when popping it out from its folded/closed position and clicks into place nicely when fully unfolded. Huawei has said that this new hinge has been tested 200,000 times to ensure longevity.

Like last year’s device, the new Mate Xs is packing a 4500mAh battery that should definitely be enough to get you through an intense day but, if you do need to top it up, there’s support for 55W wireless charging.

As I mentioned earlier, one of the main upgrades for this year’s Mate Xs is the inclusion of Huawei’s 5G enabled Hisilicon Kirin 990 chipset which was first introduced in last year’s Mate 30 Pro. This new processor should also help towards improving battery life will also increasing overall horse-power available for multi-tasking and gaming.

Playing around with the device, both unfolded and folded and jumping between apps, we found no lag whatsoever and it handled everything we threw at it in our short hands on time. Under the hood, there’s 8GB of RAM and 512GB of storage which understandably goes towards its substantial price tag. 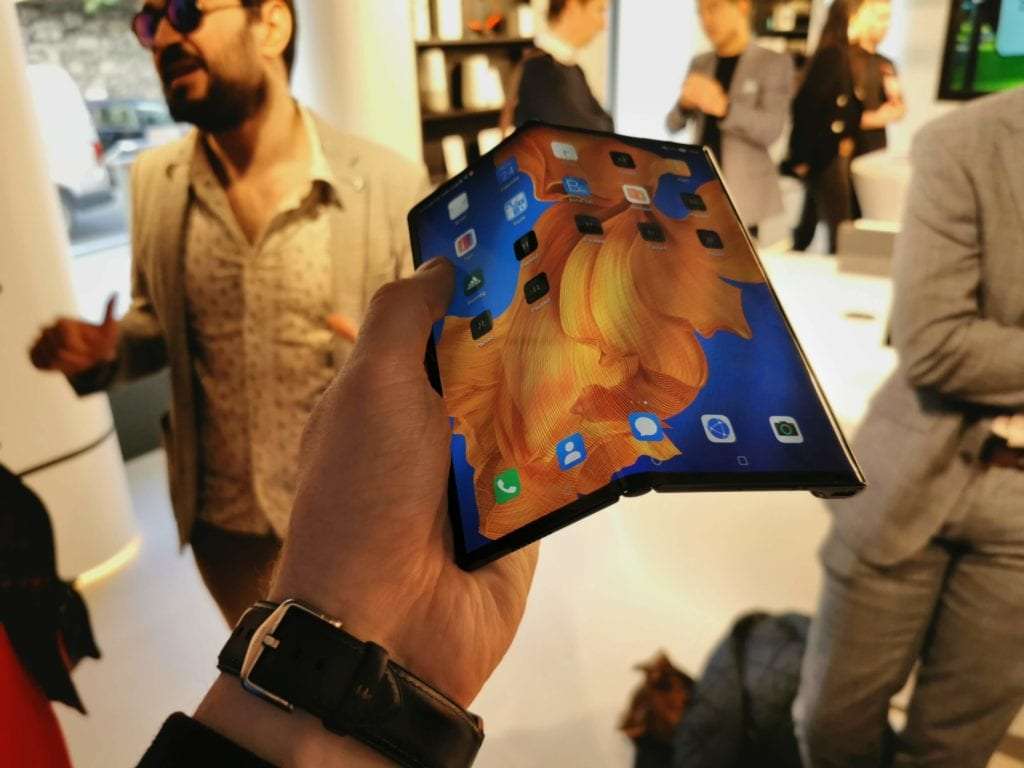 The obvious elephant in the room for the announcement of this new handset is that it won’t have Google’s Mobile Services on board. The Mate Xs does run the open source version of Android with EMUI 10 on top but you won’t be able to download apps like Gmail, YouTube or Google Maps.

Huawei has said it’s pushing hard to get alternative apps on their AppGallery and with TomTom signed on for their map offering, expect similar announcements to be made when it comes to non Google alternatives.

On the rear of the Mate Xs, you’ll find a triple-module system with a 40MP wide sensor, 16MP ultra-wide sensor and an 8MP telephoto lens. There’s also a 3D time of flight (ToF) sensor to help track the depths in shots for better bokeh effects. In our brief time with the handset, the camera performed as good as we imagined for a Huawei handset.

Details were crisp, the 45x digital zoom was as impressive as Huawei’s other zooming credentials and everything was quick and snappy (pun intended) when using the camera app. We loved being able to simply open out the handset to its unfolded form and having a huge 8″ viewfinder to help us compose our shots better. 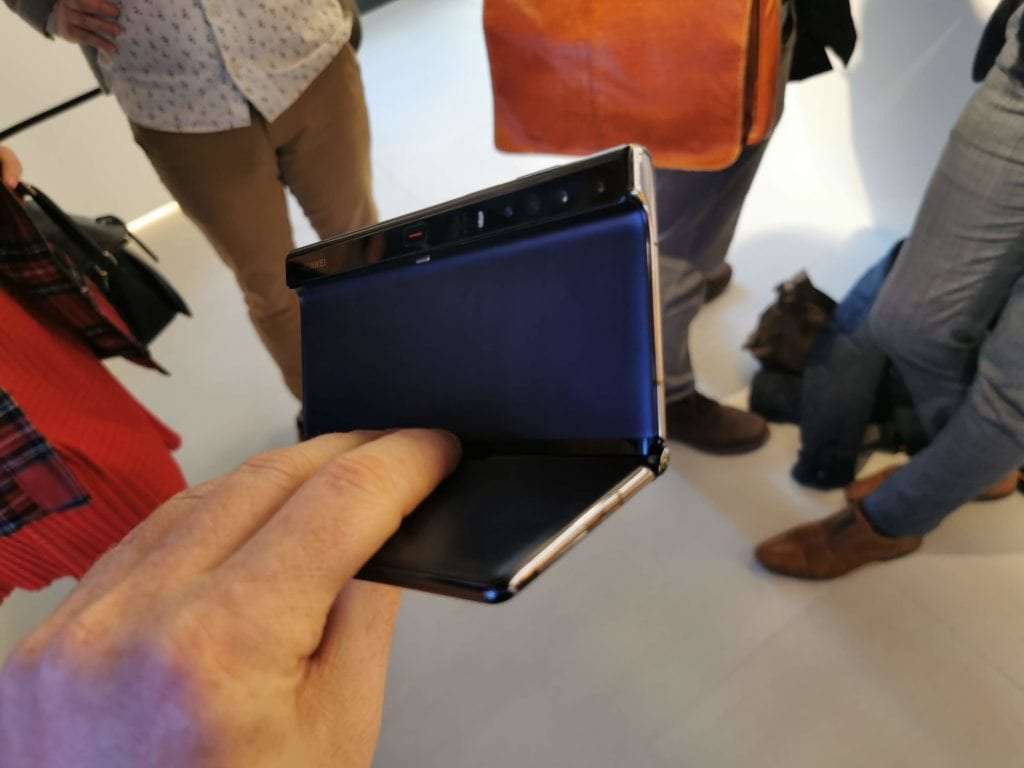 Looking at the form factor of this device, you’ll probably have spotted that there’s no ‘Selfie’ camera. That’s because, with its wrap-around display, users can simply hold the phone with the back facing forward, switch on the rear-facing cameras and use the rear-display to take a Selfie.

Having just spent a short time with the new Huawei Mate Xs, we absolutely loved its unique form factor, impressive camera credentials and Huawei’s clever implementation of UI changes when using the handset in both its folded and unfolded forms. We can’t wait to put it through its paces for our full review.

The Huawei Mate Xs is expected to arrived next month for the princely sum of €2,499. 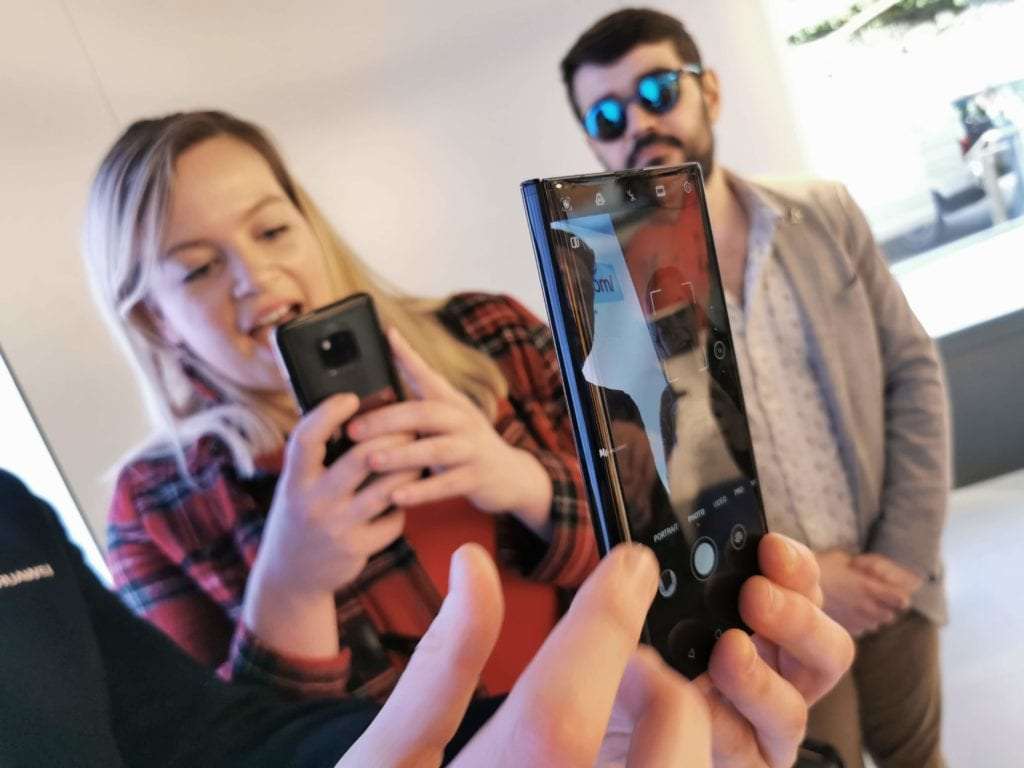