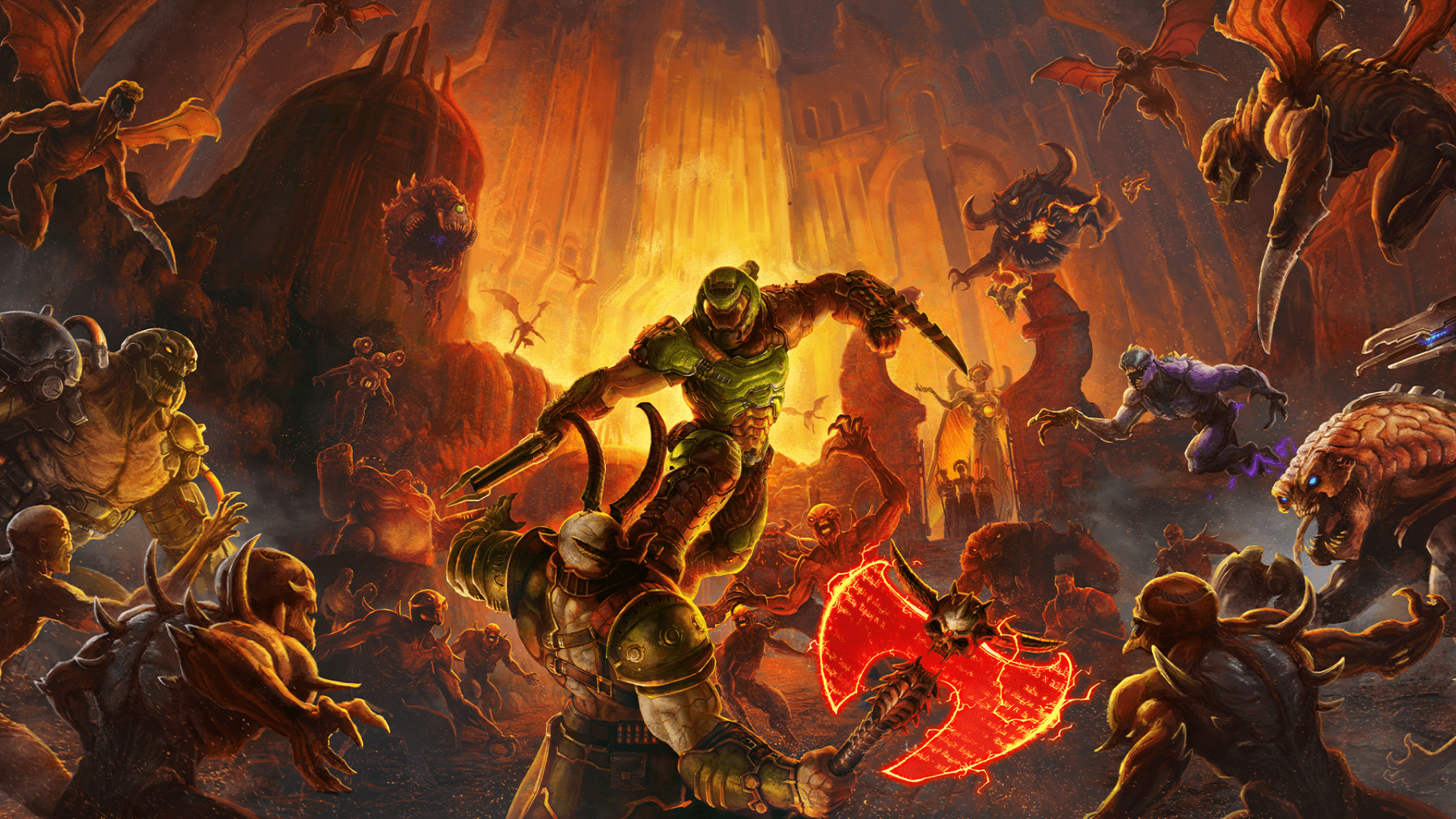 In 2016, id Software rebooted DOOM by taking the franchise back to its roots of fast-paced, in-your-face shooting. It was more intense and graphic than DOOM had ever been before thanks to the glory kills system which pushed players to keep in the action. DOOM Eternal takes everything that made DOOM one of the best FPS’s of this generation and turns it from an 11 to a 22. It’s faster, bloodier, louder and more epic than ever before. 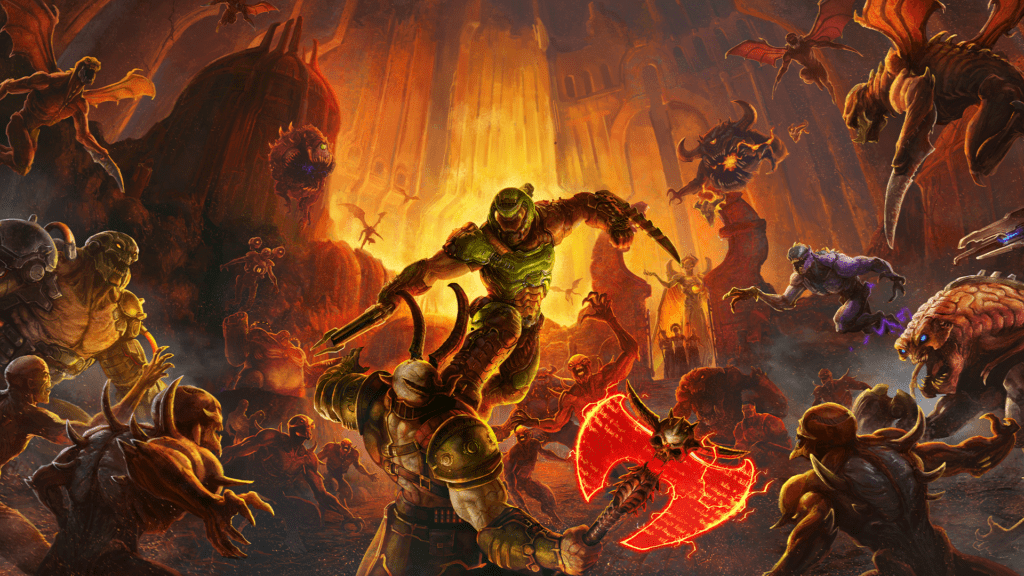 Other than one pretty cool story moment about half-way through the game, I understood the plot of DOOM Eternal as much as I did DOOM (2016). That’s to say: not very much at all. Demons, angels, hell on earth. Just give me the guns so I can shoot everything in sight and to be fair, the first game trained me to think like this as it had the Doom Slayer literally smash the plot. Thankfully, id Software knows only the hardcore care for the DOOM lore and hides nearly all of it in codex entries and although it does take the story more serious than the first game in some ways, that doesn’t mean you have to too – because I certainly didn’t.

​When you boot up the game you witness one of the best video game openings in some time with the game’s phenomenal soundtrack kicking your ass straight into gear and you’re then thrown straight into the action. It’s hell on Earth with an invasion underway and the Doom Slayer is looking to put a stop to it.

Unlike the first game which would have you activate these eggs to send enemies down upon you, DOOM Eternal has a much better rhythm to its levels. The music builds the tension as you take on small groups of enemies and make your way through the level before eventually entering an arena where enemies are already fighting one another. Whereas the first game had these sprawling areas with enemies spawning all over the place, DOOM Eternal embraces the arena shooter elements more so than ever before and comes out feeling like Quake.

In DOOM (2016) you got your hands on the super-shotgun and would more-or-less end up falling back to it at all times. If you got stuck in a corner you could spam melee, hope for the best and usually end up grabbing a few glories kills quickly to replenish your health. All of that won’t work in DOOM Eternal. The Doom Slayer’s melee has been significantly reduced to do barely any damage and the enemies now require unique and specific weapons and tactics to take-on. That’s not to say the super-shotgun still isn’t great, but you can’t rely on it to carry you through the game anymore. 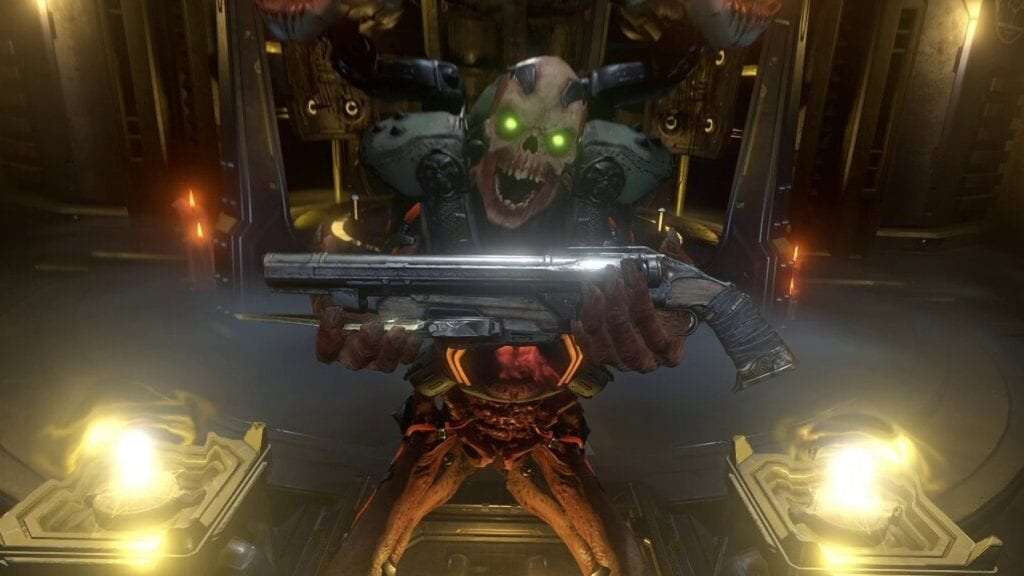 The first two levels of the game will introduce you to the tools of the trade and there’s a lot thrown at you very quickly, especially if you haven’t played 2016’s DOOM.

Staggering an enemy will allow you to initiate a glory kill which will drop health. Using your flamethrower attachment on enemies and then damaging them will drop armour. Your chainsaw lets you cut enemies in half who will then drop ammo and health.

Learning to use all of these tools is a must to stay on top of your resources at all times. Unlike the first game, your chainsaw will always charge up to one bar which means you can’t really run out of ammo as long as you find a fodder enemy like a zombie to use it on and if you flamethrower them before you chainsaw them, you’re getting two resources at once. Learning to think about the best way to keep up your health, armour and ammo at all times is the key to success in DOOM Eternal. The resource management is as much part of the experience as pulling the trigger.

​Other than the fodder enemies like z​​ombies and imps which can be used for quick ammo and health, everything else in DOOM Eternal is going to hurt you badly if you don’t attack its weakness.

The first big enemy you’ll meet is The Arachnotron which is a spider-like enemy which has a ranged cannon equipped to its back that will rain hell on you from afar. Destroying the cannon will put it at a disadvantage and you can do this by simply shooting the cannon enough to destroy it, or with one well-placed shot from your combat shotguns secondary fire grenade attachment. 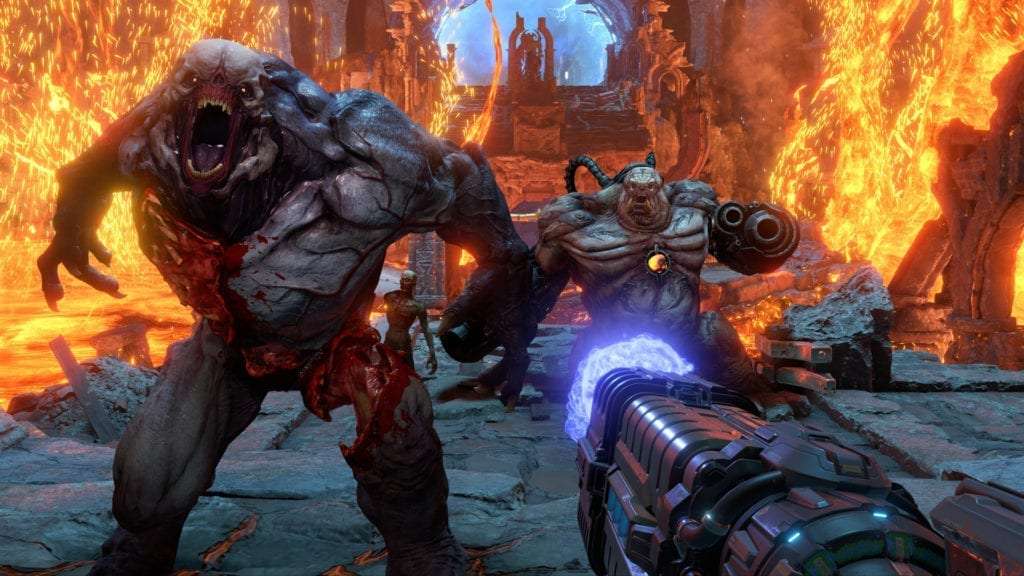 Nearly every enemy in the game has a weapon you can destroy or simply a weak point. The Mancubus (below) can be a real pain but if you fire one grenade in their mouth you’ll stun them and be able to go in for a glory kill. Each gun in the game is an enemy’s weakness which means your weapon wheel is a rock, paper, scissors chart for combat.

The Doom Slayer has two new abilities that let you move around enemies easier and make the game’s speed turn up another notch. You can now dash twice before a short cooldown is needed and you’ll also find poles that you can swing off for quick escapes. Some weapons now have new alt-fires too and the Super-Shotgun got a meat-hook that pulls you towards an enemy. The levels have been designed for these new abilities, with more verticality to them, and this can lead to some nice mid-air, double-dash finishers. 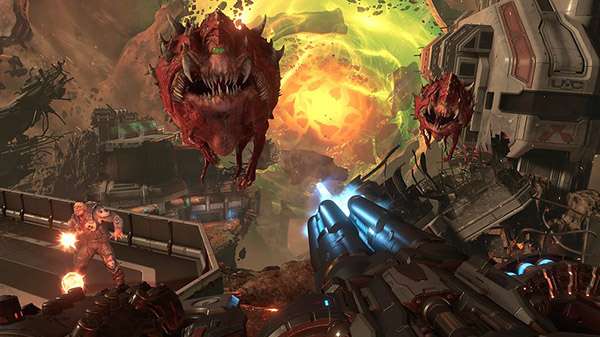 ​DOOM Eternal isn’t easy and the game is rather in-your-face about telling you it won’t be easy. When you beat the first boss only to be thrown two more of them, it is very easy to yell “are you kidding me!?” But other than the last three boss battles in the game, the earlier ones aren’t unique enemies, they’re introductions. The second boss, The Marauder, is this axe-wielding big demon with a shield that blocks your attacks and requires you to counter him.  Two levels later he’s showing up as a normal enemy amongst everything else being thrown at you.

The game trains you without you even realising it. By the end of the game you’re taking on several enemies you struggled to 1v1 all at the same time and it’s intense but super-exhilarating.

Breaking up the fights is a small number of puzzles to find key cards, but nothing that ever slows you down for too long. For the most part between arenas, you’ll be performing platforming that takes advantage of the dash ability and another addition – wall grabbing. And as bad as I thought they were going to be — since I don’t think FPS platformers ever really work out — I really enjoyed them. They were never long segments but paced out the action just enough to give you a break.

Aside from adding the intense gamplay, what all the new verticality does is let you take in DOOM Eternal’s stunning new locations. Gone is the red Mars tint to everything and corridors of UAV bases from the first game. 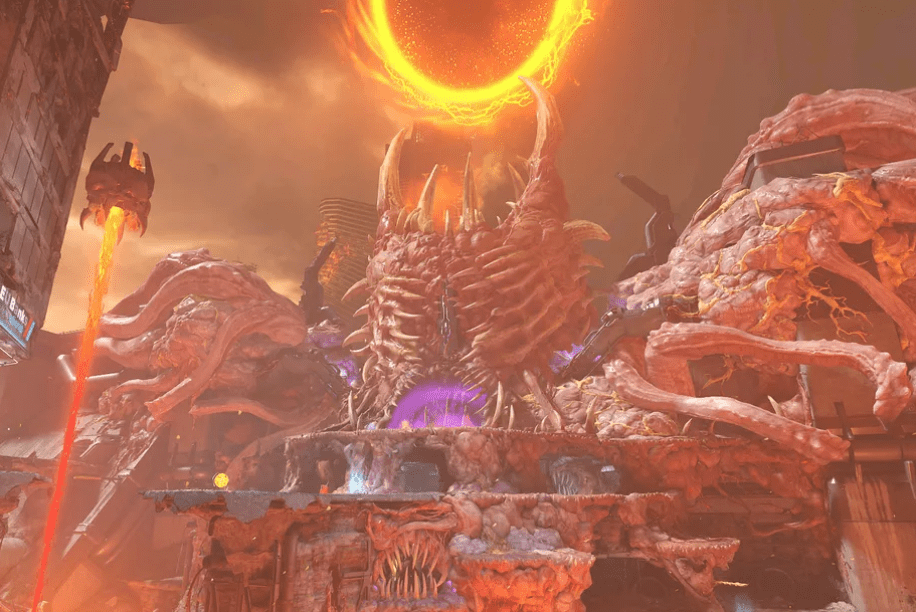 In DOOM Eternal you’ll explore various different planets and locations that all have their own unique feel and alien-like qualities. Several of these actually have blue skies and stunning vistas to enjoy. Not to say the scale of destruction on Earth isn’t enjoyable in its own hellish way. 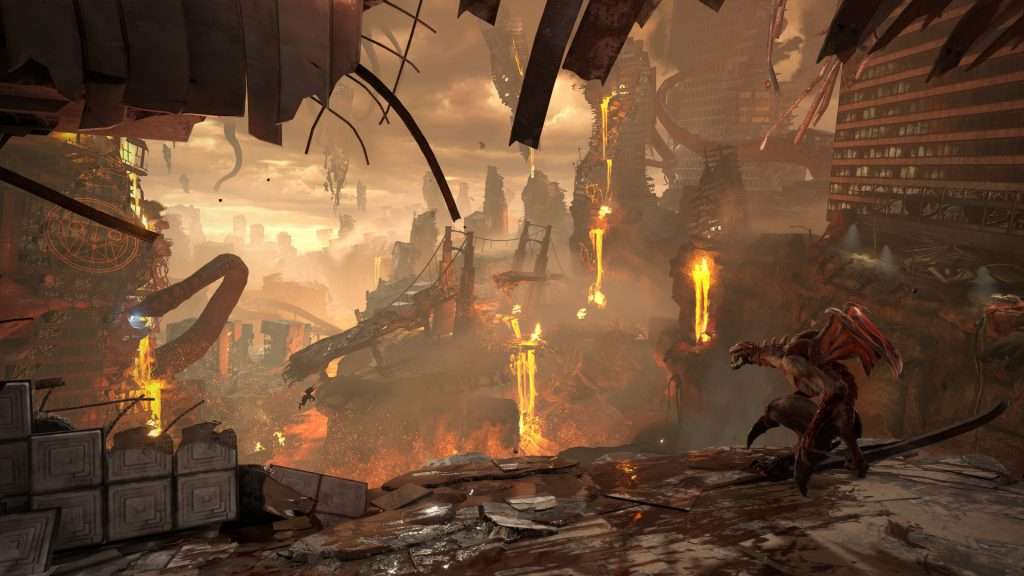 It took me about 14 hours to beat DOOM Eternal on the normal difficulty. I found a decent amount of secrets and died a lot on several encounters. On any of the harder difficulties, this will take you easily 20 hours or more as the fights will simply take longer unless you’re worryingly good. 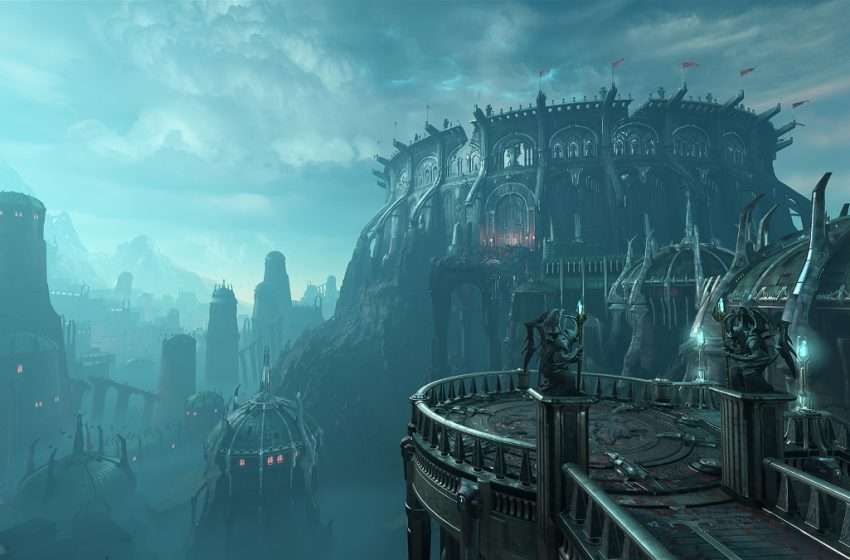 There’s a multiplayer mode here called ‘Battlemode’ which tries to do something different but will probably only hit with a core group of DOOM super-fans like the first game’s efforts. You’ll play as either the Doom Slayer or one of two demons in a 1v2. 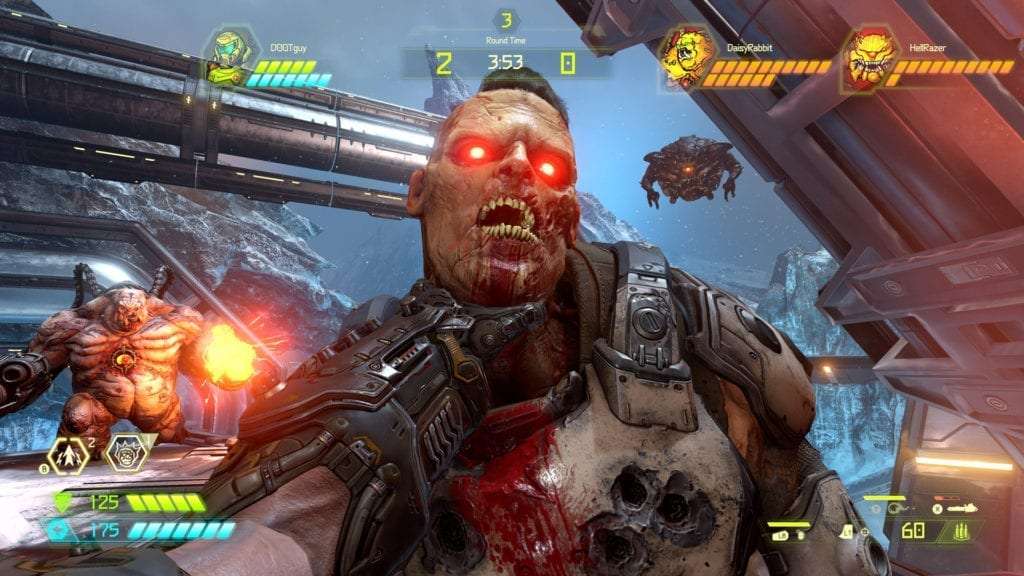 ​The idea is fun, but the games take way too long to get into and then can be over very quickly. Like the demons, you can set four different abilities which can include summoning other demons and as the Slayer, you get to set a pretty standard loadout as if it was a deathmatch. The matches take place over several rounds and the first to 3 wins is crowned king. I played a couple of hours of Battlemode to try out all the demons and the Slayer himself but I don’t see myself returning. 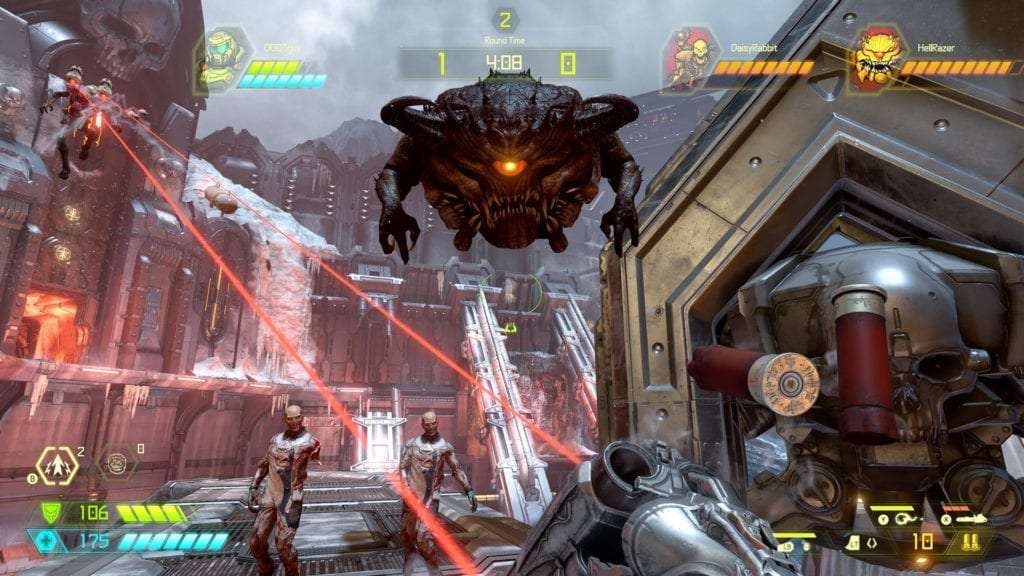 When you’re done with the campaign there’s much more to do still. An abundance of secrets to find which include vinyl that hangs in your Fortress of Doom, a ship-of-sorts which acts as a hub world you use to select levels and can do training inside of. Master levels will be released periodically in the future with one currently playable (two if you got the deluxe edition). These are remixes of levels that change up the enemies and throw a lot more of them at you.

When the credits started rolling I was exhausted and my hands actually hurt from the intense controller action required in DOOM Eternal’s final levels. However, after I took a short break I jumped into the Master Levels because the combat is just so damn rewarding and fun. DOOM Eternal is easily one of this generation’s best FPS’s as it rips and tears its way to outdo the first game in every way possible.