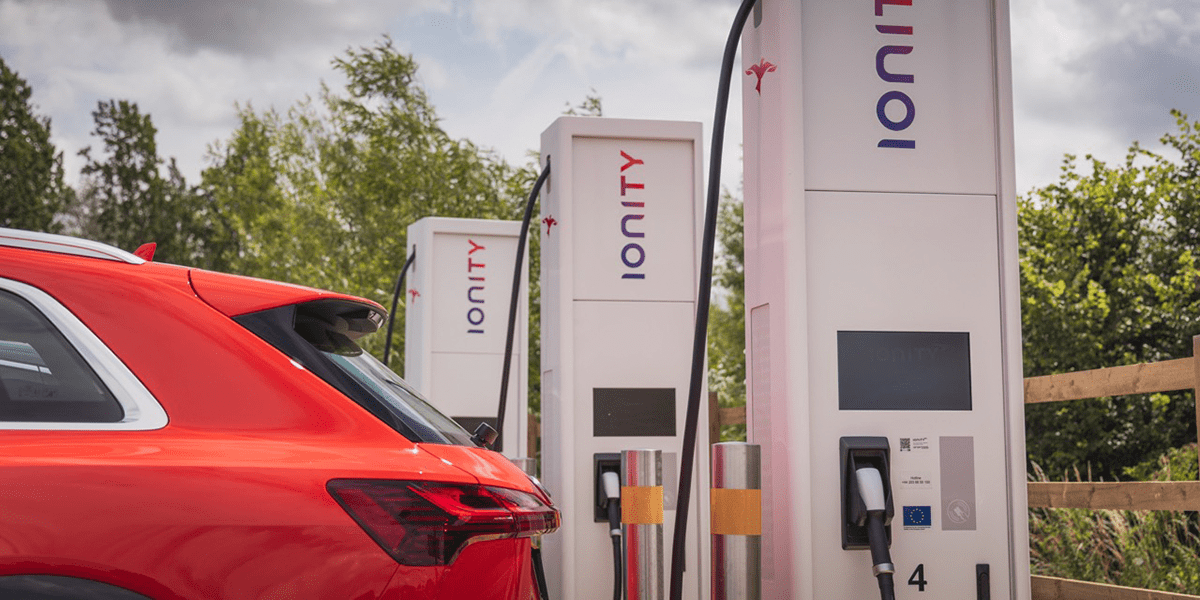 There are now four main Electric Vehicle (EV) charging networks in Ireland. Most people are familiar with the iconic Tesla units and the ESB chargers littered around the country, but we also have more recent additions in EasyGo and IONITY. The charging infrastructure in Ireland is changing rapidly. 2020 is likely to be a watershed moment for EVs in Europe due to the impending EU regulations on emissions. Manufacturers will be increasing supply and introducing electrified models at a rate never before seen. Read on to see our review of the the IONITY charging network in Ireland.

IONITY is an electric vehicle charging network established in 2017. They have just over 200 in place across Europe now, with plans to increase this to 400. The network is a joint venture between BMW, Ford, Mercedes, VW, Audi and Porsche. Korean manufacturing giants Hyundai and Kia joined as shareholders in 2019.

IONITY install high-capacity Combined Charging System (CCS) chargers at multiple sites around Europe. As with laptop chargers, there are different connections. I can’t charge my Lenovo with my friends’s Dell charger. All car manufacturers in the IONITY joint venture use the CCS plug. This rules out the likes of Ireland’s most popular EV, the Nissan LEAF, which uses the CHAdeMO plug. Unsurprising really; what business is going to give its competition a free lunch? Tesla Model S and X can use the CCS plug with an adaptor. In Europe, Tesla smartly produces the Model 3 with a CCS connection. 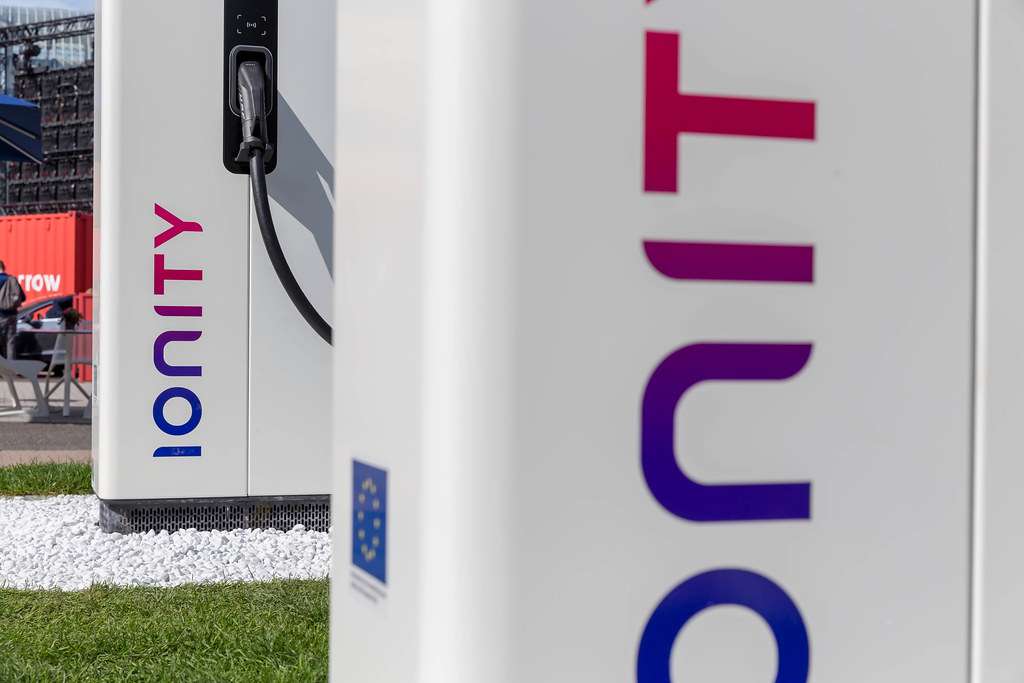 Where are the chargers?

There are currently fourteen charge points spread over four sites across Ireland. Two more sites are under construction in Kildare, one each on the West and East-bound routes of the N7. The sites cover a lot of the major routes for long distance journeys in Ireland: On the M1 beside Drogheda, the M6 beside Athlone, the M8 at Cashel, and the M11 between Arklow and Gorey. There are at least 2 charge points at each site, and most have space earmarked to introduce more at a later date. IONITY have been clear in their purpose to facilitate long distance travel, and are following through in Ireland. 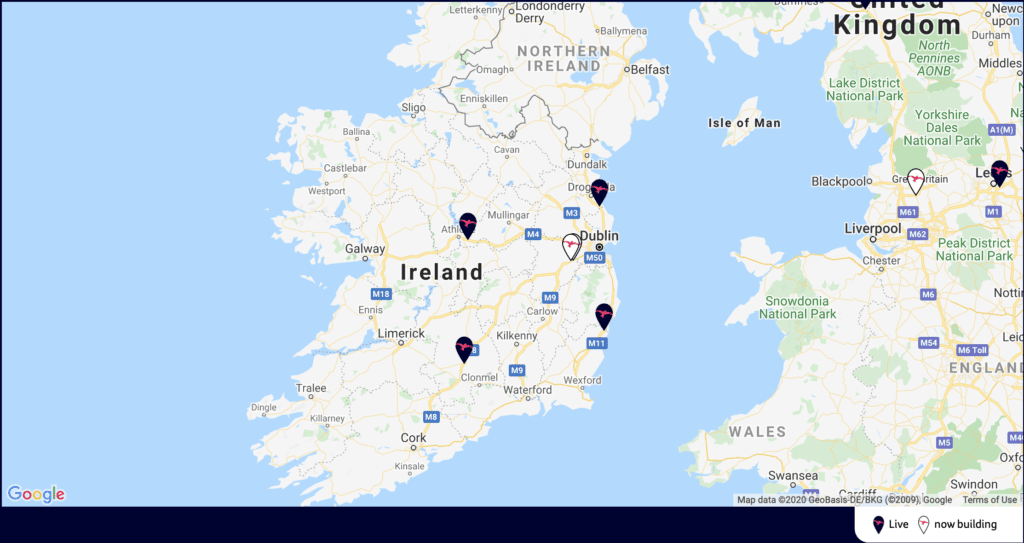 This is where it gets tricky. A classic question EV owners get asked is ‘how long does it take to charge?’ This is a bit like walking into a bar and asking the barman how long it takes to get drunk. It depends, my friend: What are you drinking? How much do you normally drink? Have you had a few already?

The IONITY units are equipped to charge at speeds up to 350kW. This means that they can put up to 350 units of electricity into the car in one hour. However, no production car is currently capable of taking that amount of power. But this isn’t a problem, it just means that they’re future proofing. It is the battery in your car, and its Battery Management System (BMS) that dictates the speed of charge. For example, this writer’s 2016 reg Nissan Leaf will peak around 45kW. Also, charging speeds begin to slow substantially as the battery moves past 80%. Hyundai’s latest models will take up to around 70kW. The Audi e-tron claims to take up to 150kW. If you’re lucky enough to afford the Porsche Taycan and its 800v infrastructure, you will see peak charge rates just above 250kW.

Some of these charging speeds on the latest cars are becoming academic; you can’t even go into the garage to take a wee and get a cup of coffee in the time that your car is back up to 80%. 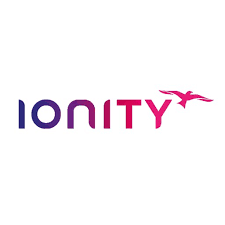 One of the problems with EV charging in general is the necessity to have a membership card or create accounts on apps. In an ideal world, all chargers would move to contactless payment; just plug in, swipe your Credit Card and go for a coffee while you charge. Although a little bit of hassle to set up initially, the process is then easy to follow. Having said that, in some ways it is handy to have the card permanently stored in your car so you don’t have to worry about forgetting your purse or changing your card between wallets.

IONITY thankfully scrapped its initial payment structure of an €8 connection fee no matter how much power you drew. They have instead switched to a rate of €0.79/kWh. Considering domestic rates in Ireland are just under €0.20/kWh, and nearly half that if you have a night rate, this is hugely expensive. It puts the charging cost per km driven roughly on a par with a comparative combustion engine.

However, if you sign up with one of IONITY’s Mobile Service Providers (MSP) you will pay a discounted rate. Owners of Mercedes’ luxurious EQC pay as little as €0.29. Porsche Taycan owners pay €0.33 and get access to another 100,000 points across Europe. Audi’s prices match up and also give you access to the ESB chargers with the same card.

At this point it’s worth noting that the price per kWh doesn’t really matter if your journey from West Cork to Dublin costs you an extra tenner because you paid the top rate. You’re still paying a fraction of what you would have in petrol or diesel for the return trip. On a long journey, you’ll only use the fast charger to top up enough to get you home comfortably. Then it’s back to your domestic rate. You might even have solar PV on the roof of your house and charge for free.

The cost, around €0.35/kWh once you sign up to an MSP, is competitive. If you’re lucky enough to own the likes of an E-tron or a Taycan to take advantage of the charging speeds, then the value is excellent. If you haven’t signed up and pay the full rate, then you’re probably using IONITY on a rare occasion and it doesn’t really matter.

With at least two units at each site, the chances of turning up to a broken unit are reducing. The locations are very well placed. A few more of these units around the country to compete with ESB’s unreliability would be a welcome boost.

The rollout of IONITY’s high-capacity chargers moves electric transport in Ireland forward. It is a hugely welcome addition to the network of chargers that will ease the adoption of EVs in Ireland. The landscape is changing rapidly. Hopefully, in years to come, IONITY have proved that their network was well-maintained and fit for purpose.

Thanks to Blake Boland from EV Life Ireland for this review.