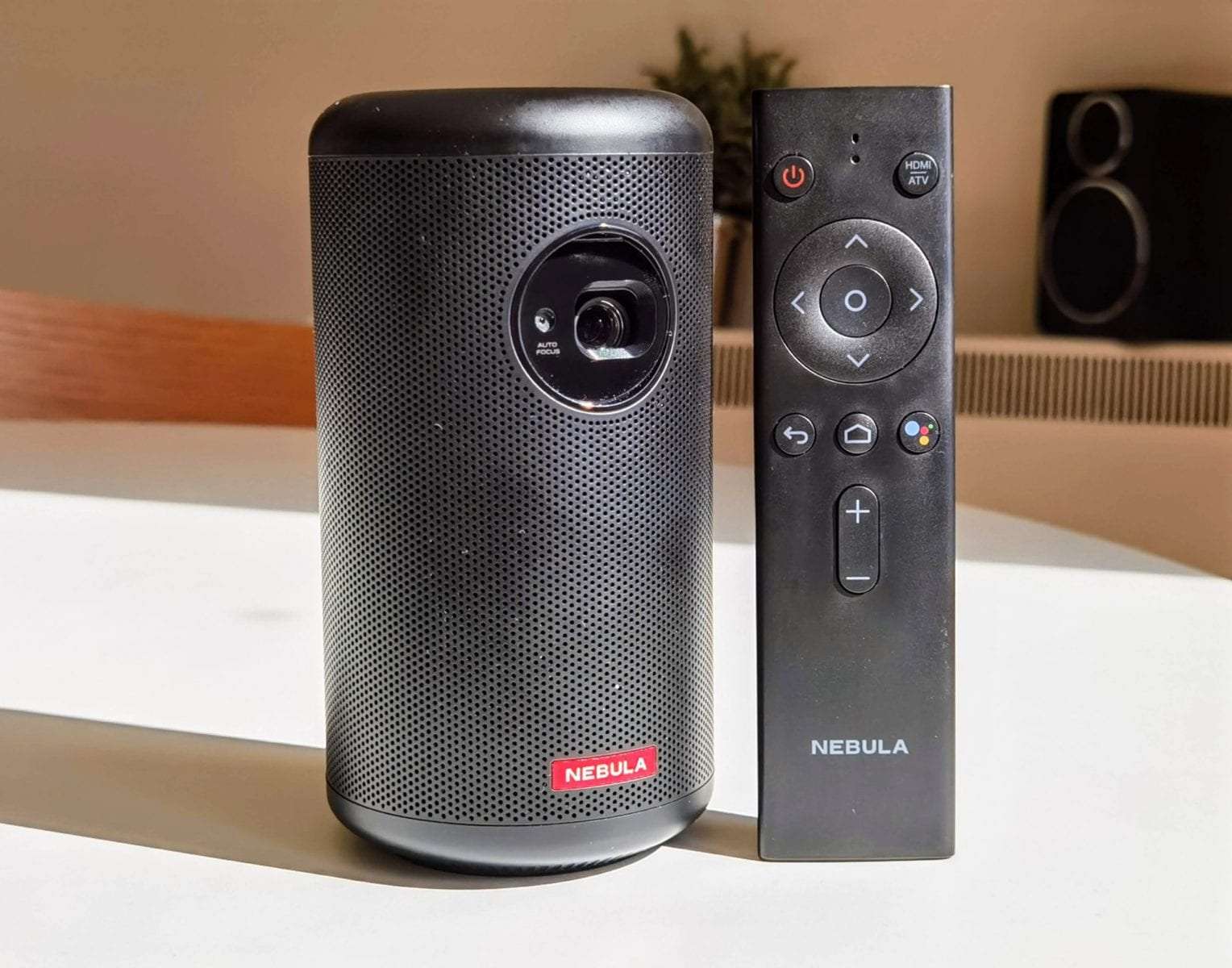 ​Android TV is available on a wide variety of Smart TV platforms and standalone devices and at varied price-points, but one thing it isn’t is very transportable — this is where the Anker Nebula Capsule II comes in. The Anker Nebula Capsule II combines the exceptionally small form factor of a mini projector and fuses it with Android TV for entertainment on the go with additional features and performance squeezed in.

Given its form factor and portability, this compact projector shouldn’t really be something you’d hook to a TV set as an Android TV ‘set top box.’ (although you could do that if you wanted.)

Because of its built-in battery and speaker, this device was built to be brought everywhere you want a mini cinema experience in portable form.

Below is our full review of the Anker Nebula Capsule II.

With such a small form factor, It’s hard to tell just how good this little device is from first impressions. Only slightly taller and wider than a Coke can, it really is as compact as you can get for a portable projector.

Unsurprisingly, given everything its got packed in, the Capsule II is quite hefty. Made with a metallic outer shell, which acts as a speaker grill also for the built in speaker, its definitely robust enough to chuck into your backpack. If you didn’t spot the projector lens on the side, you’d be forgiven for thinking it was just a normal cylindrical Bluetooth speaker. 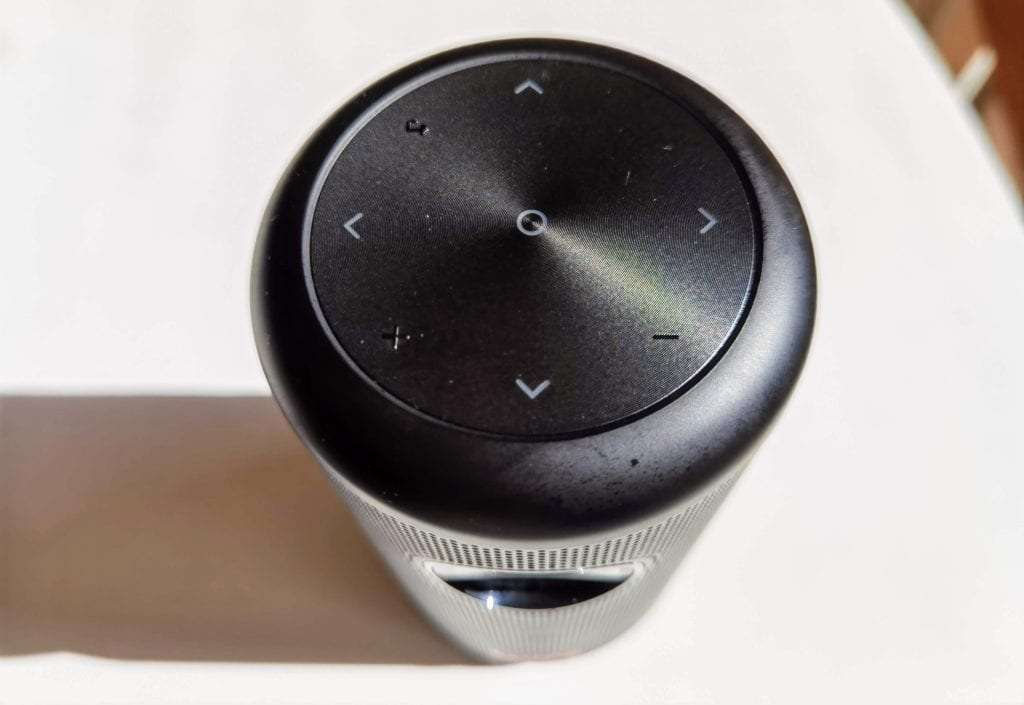 On the top, there’s a selection of capacitive buttons that let you control the device without having to use the supplied remote. The remote itself is nice and compact and also has a dedicated microphone for Google Assistant requests, which is handy when you’re looking for something on the device or just have a general Google query you want to ask. 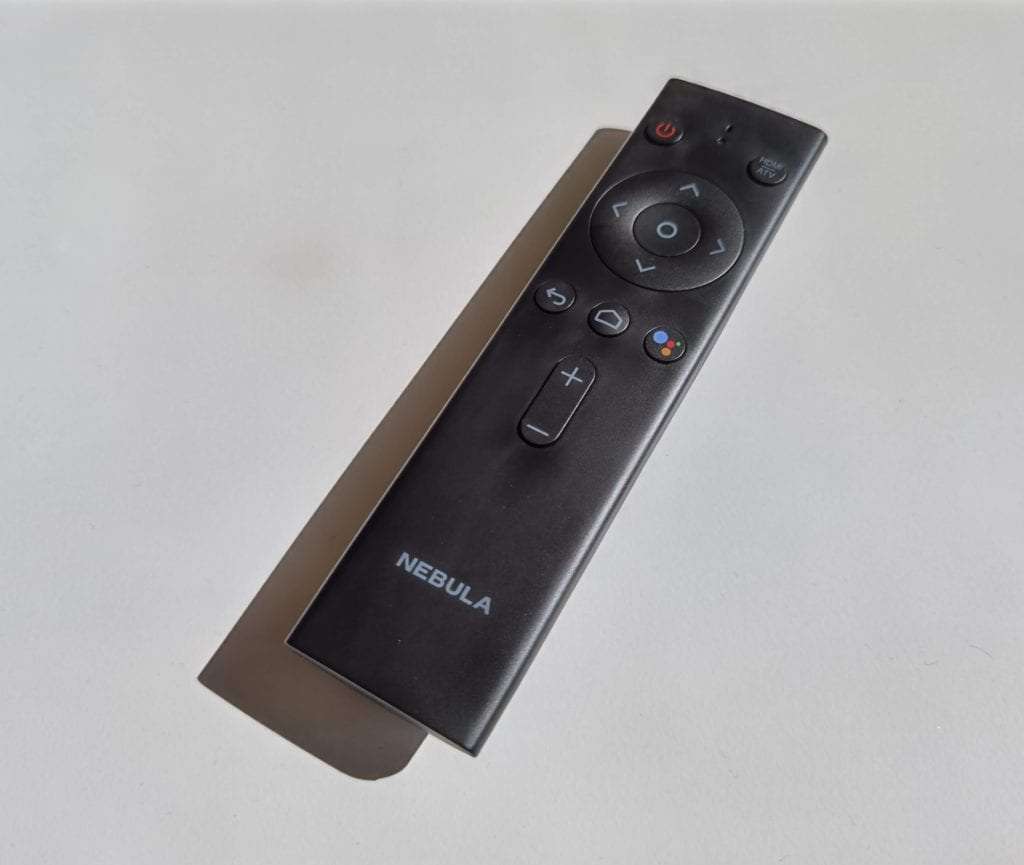 On the back of the device, there are two buttons, one which let’s you switch between the projector mode or change the device to a Bluetooth speaker along with the power button. There’s also a small IR receiver for the remote (which also works via Bluetooth.) 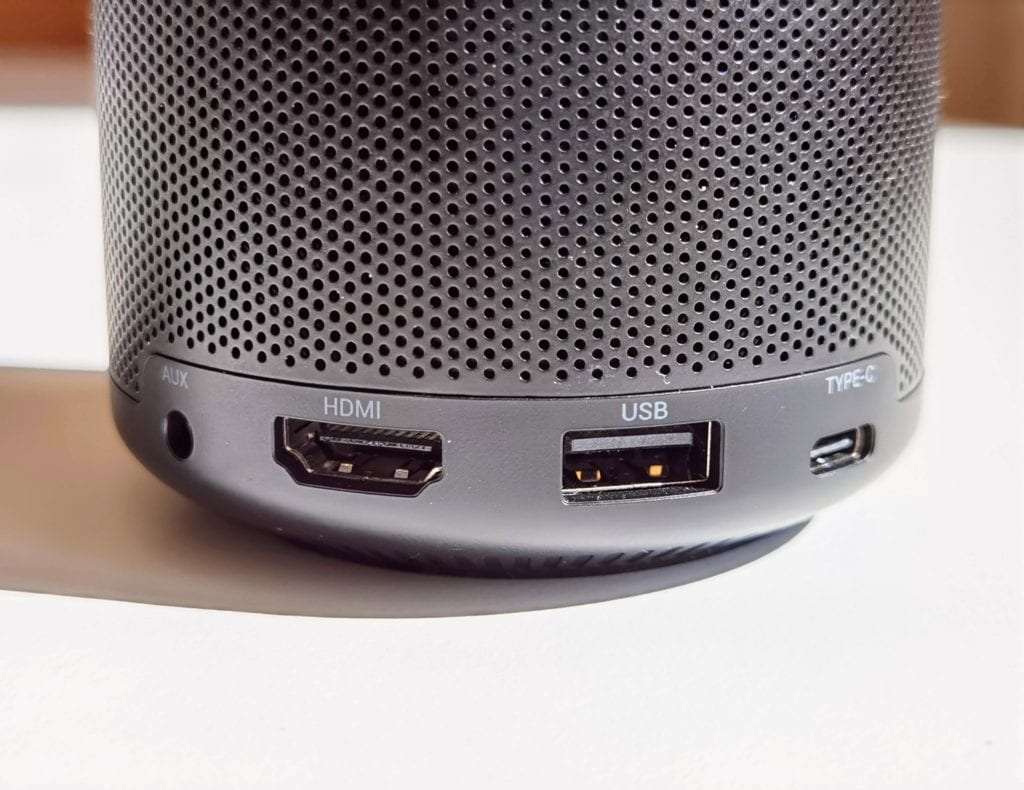 The Anker Nebula Capsule II comes with Android Pie version of Android TV, the most recent version of Google’s TV OS. On a whole, the OS experience is straight-forward and easy to use but there are a few caveats to be aware of too. We’ll get into those in a bit. 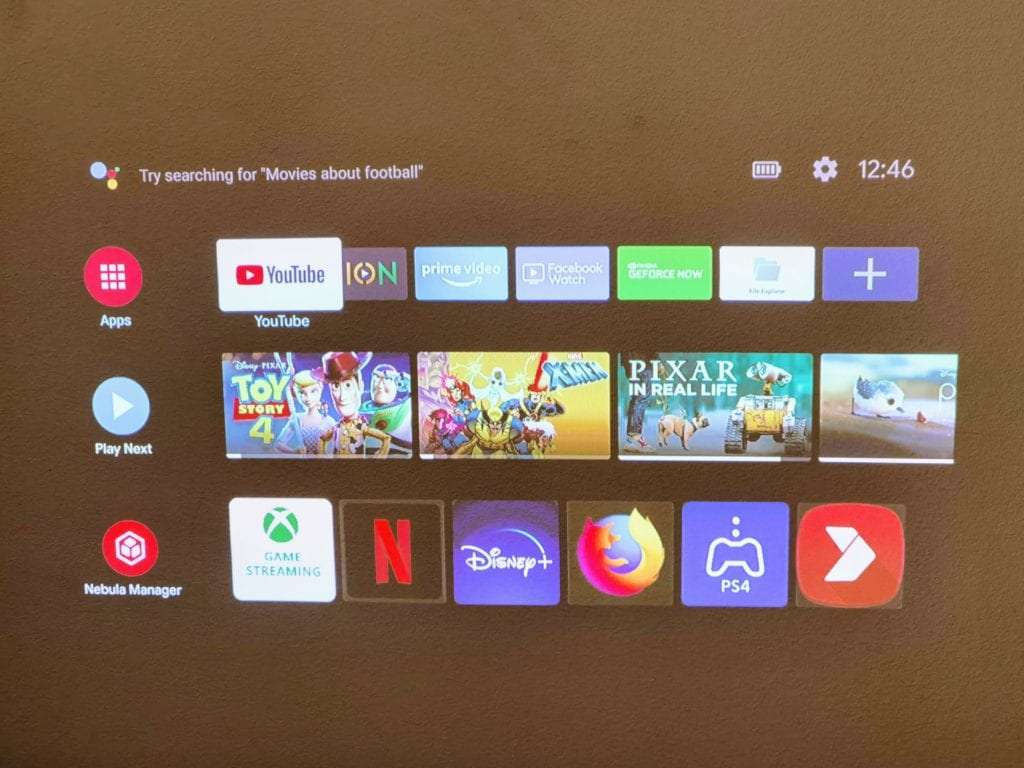 With Wi-Fi built in and 8GB of internal storage, (along with the USB Type A port I mentioned earlier) you can sideload all sorts of additional Android apps to add to your overall entertainment experience. Unfortunately, Netflix actually isn’t downloadable directly from the built in App Store but Anker have set up a sideload option directly into the projector itself so it will push the relevant APK (Android Package Kit) to the device to let you install it. You can then use the Nebula Connect app that has a dedicated button to access Netflix directly.

There’s also the Nebula Manager app that will allow you to download other popular streaming and entertainment apps such as Amazon Prime Video directly to the device, which is handy.

With these two major streaming app omissions from the official store (Anker did say they’re working hard to get Prime Video on their officially), the fact the device has Chromecast built in means you can simply stream any other ‘cast’ supported apps to the device. Unfortunately, and you probably guessed it already, Netflix is one of the only apps you can’t actually cast to the device. (Netflix really don’t like their content being streamed/supported on ‘unsupported’ devices.)

With the Google Assistant integration, it’s very handy being able to control other devices in the house via the Capsule II such as dimming lights for movie night..

The Capsule II packs an impressively large 9,700mAh battery. When testing it out, we managed to get 2 hours and 45 minutes of streaming YouTube videos before it kicked the bucket which is decent given it was also powering the built-in 8W speaker as well. 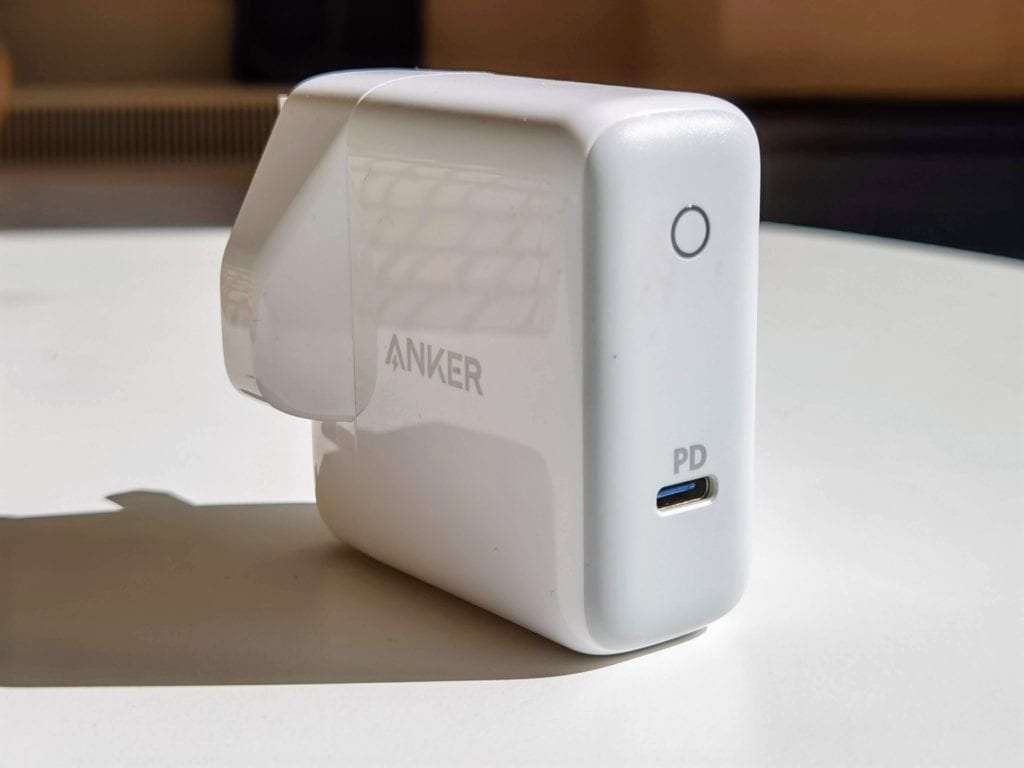 When it comes to charging, it took us just over 2 hours to charge the projector back to full which is equally impressive given the size of the battery. This is done by using Anker’s own proprietary charging tech along with the bundled USB Type C quicker charging cable and plug adaptor. The fact you can charge via any USB Type C cable though is a very nice bonus as well.

Offering 720p resolution up to 100 inches is an impressive feat for this little projector and, on a whole, it delivers. With its increased brightness of 200 ANSI over its predecessor, the Capsule II is respectively bright in darker scenarios but it really doesn’t work when you start to increase the ambient light around wherever you’re projecting to so you really need to try and make the place as dark as possible.

That said, if you do manage to project on a wall large enough for the device’s 100″ display size, understandably, things start to get a little mushy. Bringing the projector closer obviously reduces the ‘screen size’ but does increase overall brightness and sharpness so we’d imagine most users will go for this option instead. The built in auto-focus and vertical key-stone adjustment is fantastic and works flawlessly and really help with setting the projector up at any distance. The lack of auto horizontal keystone adjustment is something to be aware of if you are setting the projector up on an uneven service or at an oblique angle but, again, we’d imagine most users would aim to place the device on a flat service facing directly at the projection service when using it.

If you find the sharpness reducing a bit, you can press and hold the HDMI/ATV button at the top right of the remote to get the auto focus to kick in and sharpen everything up again. 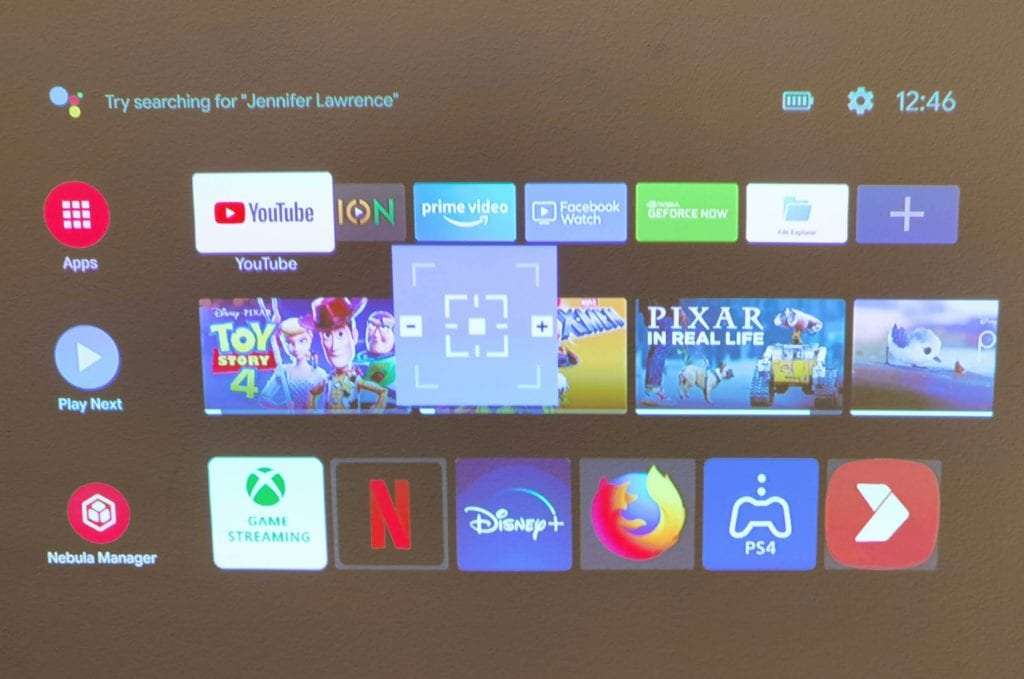 As I mentioned previously, the Nebula Capsule II has an 8-watt speaker built in. When streaming content on the device and using the speaker for the audio, it’s impressively loud and bassy, given its size. With the 3.5mm jack, you can hook up an external audio source too for playing music on the speaker. 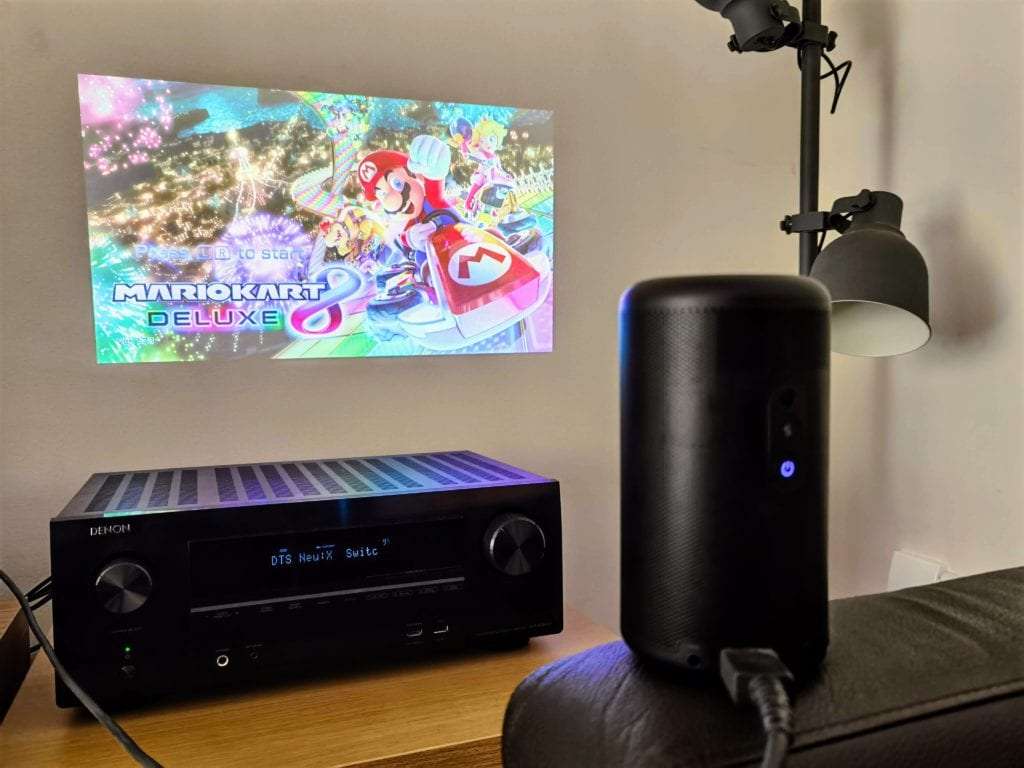 With the HDMI port, you can also hook up an external video input or even a game console like the Nintendo Switch for some large screen Mario Kart. The HDMI/ATV button on the remote lets you switch between the Android TV platform and the HDMI input.

The most important point to note with the Anker Nebula Capsule II is that for over £500/€600, you’d more than likely get a decent HDTV and a separate Android TV ‘set top box’ to hook up to it. The difference here is that the compactness and portability far outweigh something that a normal, static TV can provide.

The lack of 1080p may appear disappointing as is the shortage of official Netflix support but Android TV continues to be the most effective cord-cutting option for streaming fans and having that in a transportable bundle is quite the game-changer. Being able to modify to a Bluetooth speaker with only a button press is also a bonus and makes the Anker Nebula Capsule II projector a fantastic companion for any journey. 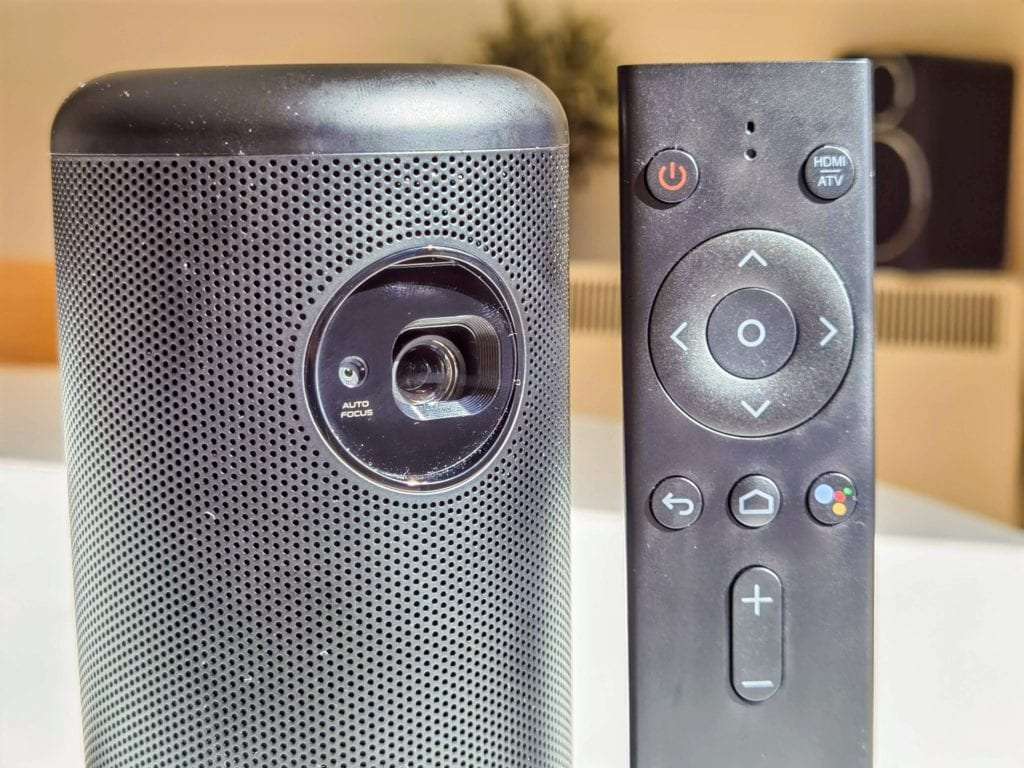