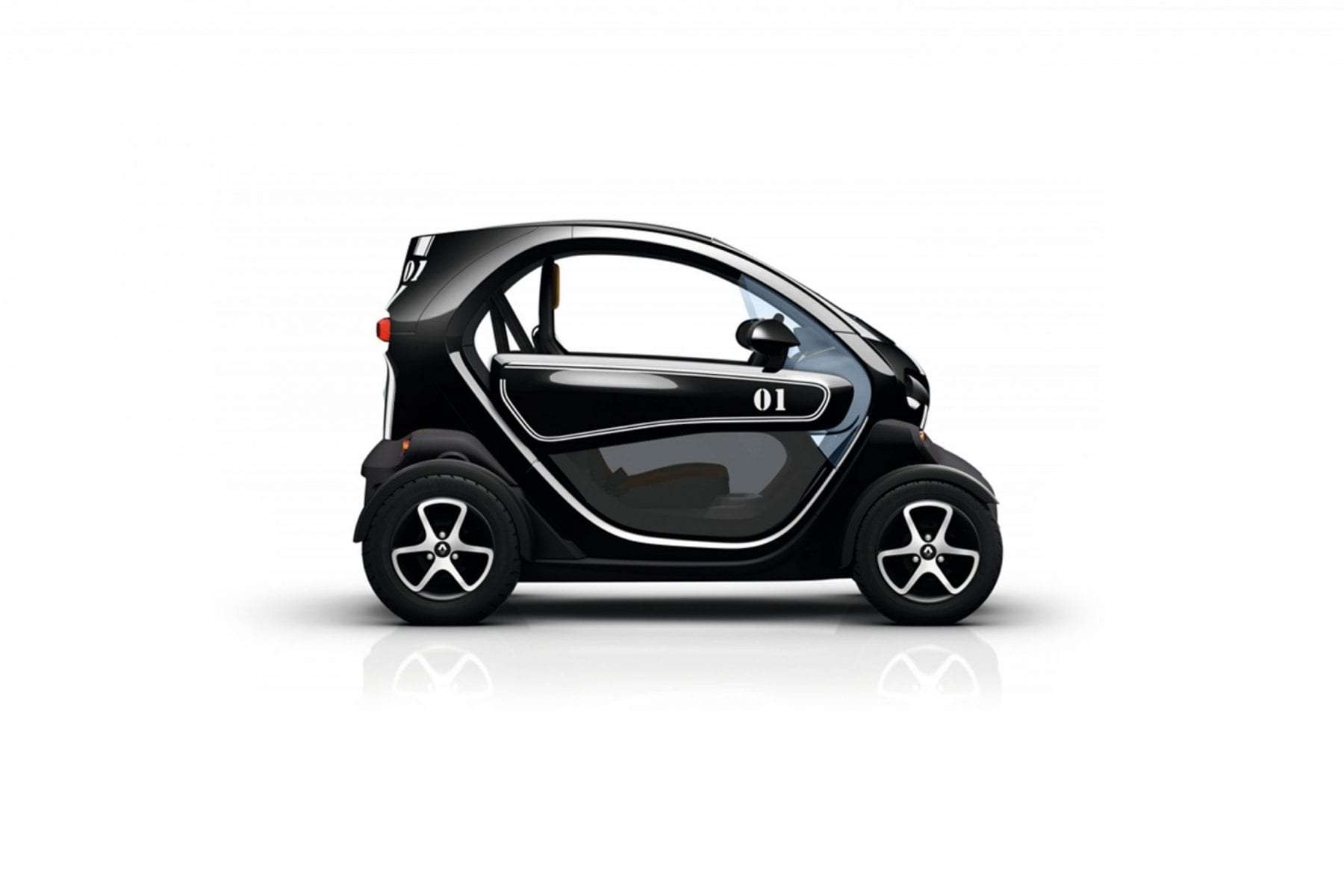 As we aim to review all the EVs (Electric Vehicles) on sale in Ireland, we left no stone unturned and below please find our review for the Renault TWIZY. Thanks to Renault Ireland for lending it to us for a week back when we could venture outside and the week we had the TWIZY was nice and chilly. So what is the TWIZY?  It’s a 2 seater (yes 2 people can fit in it!) car. Technically, in Europe, it’s classed as a light or heavy quadricycles depending on your countries own legislation.

The TWIZY was first revealed as a concept at the 2009 Frankfurt Motor Show. In November 2010, Nissan announced a rebadged variant to the TWIZY, called the New Mobility Concept, or NMC. The TWIZY was first launched in France in 2012. They used to be manufactured in Spain but now they are manufactured in South Korea due to the popularity in Asia. It sits in the Renault Z.E. (Zero Emissions in use) range alongside New ZOE, Kangoo Van Z.E 33 and New Master Z.E. 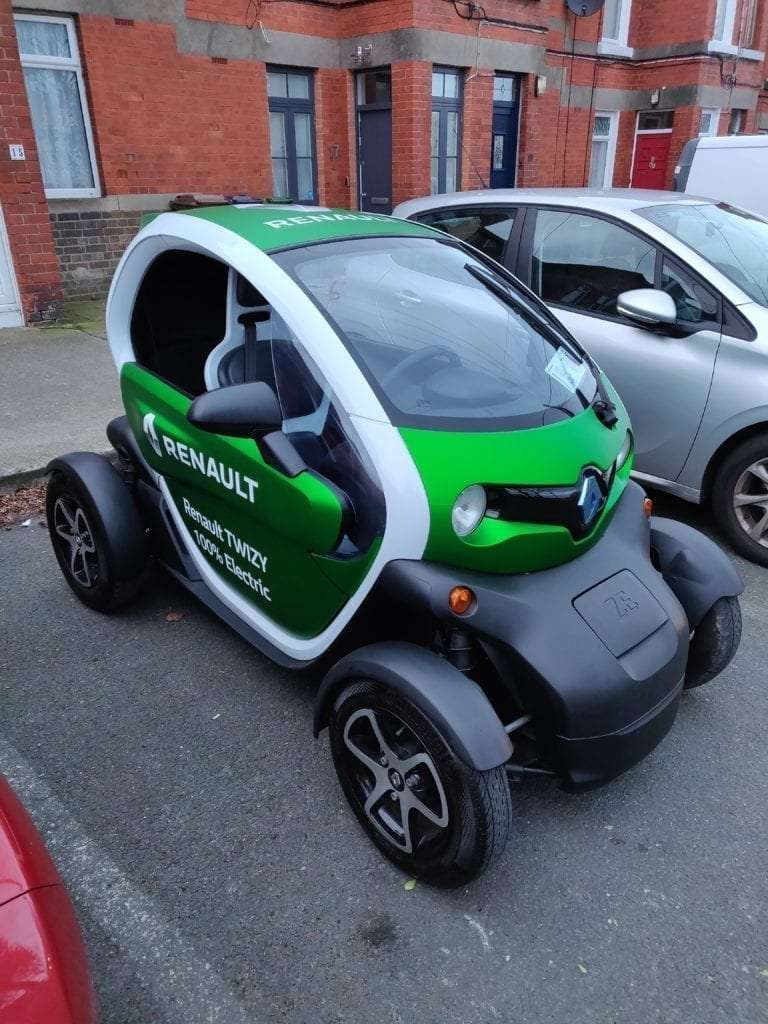 We really like the design of the Renault TWIZY. It’s a compact electric vehicle and is unlike anything else on the road today. Its overall length is just 2.34m, the width 1.24m, allowing the TWIZY to slot neatly into parking spaces too tight for other four-wheeled vehicles. The unbroken curve of the panoramic windscreen into the roof gives excellent visibility, the “Dynamique” trim level (the only one available in Ireland) also has a ‘clear sky roof’ for an even better all-round view along with it being UV Filter.

It was designed from the wheels up as a new concept in urban transport – a compact all-electric vehicle that’s ideal for the cut and thrust of city and suburban driving. The Twizy comes with 13″ Alloy wheel and a heated windscreen for quick demist. Available in 4 colours (White, Black, Orange or Blue with the later with 2 having matching colour coded alloy colours). What surprised people the most was the fact it can transport 2 people with the passenger sitting tandem style with their legs either side of the driver. I’m 6’2″ and my colleague Miles below is also around 6′ and we both fitted in.

One of my favourite design features of the TWIZY is the scissors doors. These are optional but were fitted on the EV I reviewed. They are very light weight but makes getting in and out very easy. The Chinese copy of the TWIZY the Rayttle E28 has fully sealed regular hinged doors. 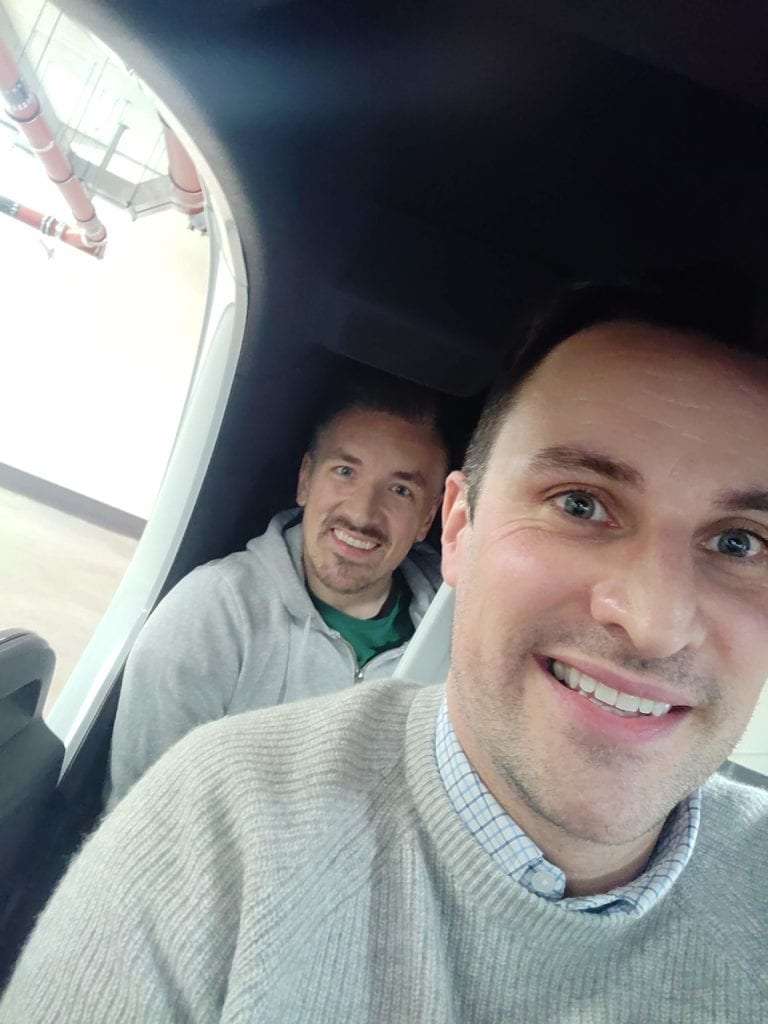 Being a four-wheeled vehicle, the TWIZY is inherently more stable and offers greater protection than a scooter or motorcycle. Its height and curvy shape make it much more visible to other road users. Disc brakes all round and a low centre of gravity give good stopping power and fundamental stability. The drive is pretty solid and with such small wheels, you’ll feel the lump and bumps.

At the front, a deformable structure provides protection in the event of a collision, while the outboard wheels and lateral beams either side of the chassis give side protection. Don’t get me wrong, there are lots of things on the road that this will come out better than the TWIZY in a collision. The driver is held securely in a four-point seatbelt, with a three-point belt for the passenger, and in the event of a front-end collision a driver’s airbag deploys. The front seat also has an anti-submarining design.

Although the cabin is compact, no space is wasted. Two glove boxes are provided – one can be locked – and a handy 31 litre storage point behind the rear seat in the two-seater versions. TWIZY owners can also order an optional motorcycle-style blanket for the driver and passenger for extra warmth and comfort. You can also order flexible side window panels. I was lucky when driving that it was just cold and for the week we had no rain in Ireland. 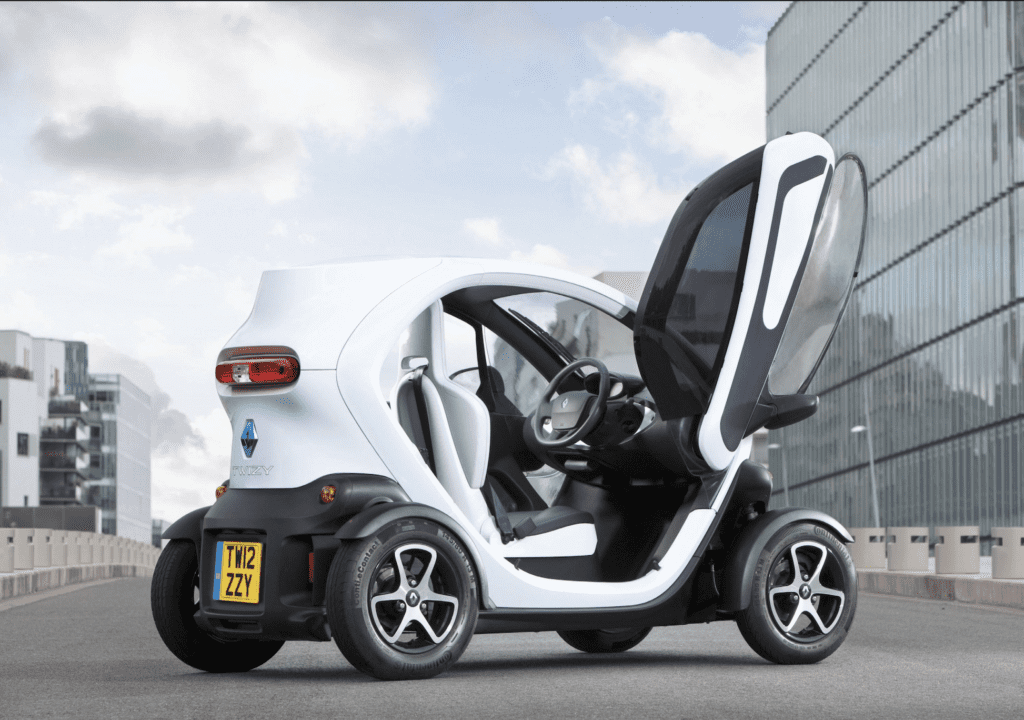 The TWIZY is pretty basic tech wise. This display in the dash gives you battery level, whether you are expending charge or regenerating it via breaking (there is only 1 level of regen), speed, range and what gear you have selected (Drive, neutral or reverse). You have full and dipped beams, indicator stalk, horn and wiper control.

A Garmin sat-nav and a Parrot MK9100 Bluetooth® kit are both optional. 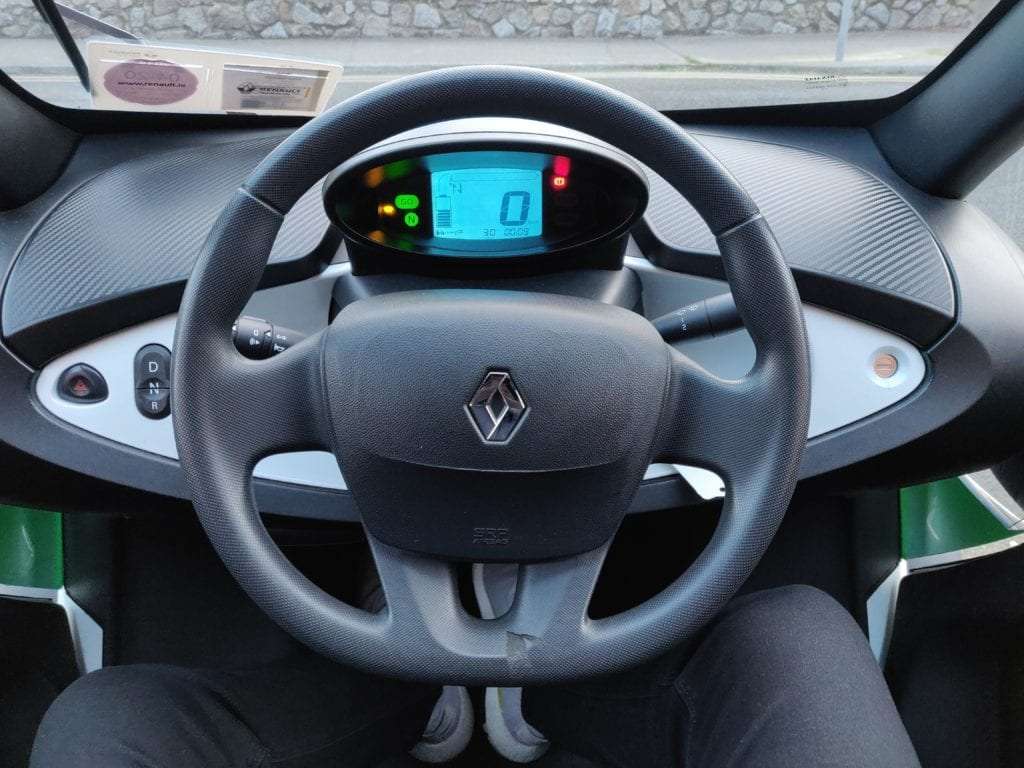 The TWIZY is powered by a rear-mounted 17hp (13kW) motor. It has a compact and lightweight 6.1kWh lithium-ion battery, located underneath the front seat. Keeping the kerb weight down to a trim 474kg, including the 100kg battery pack, has helped deliver an official NEDC combined cycle driving range of 90 kms. This translates to around 69 kms in temperate conditions and 50 kms in the extreme cold, which is ample for the majority of everyday commuting journeys or local deliveries. During the week I had it, I was achieving around 60kms

Driving is through a one-speed reduction gear automatic transmission. The TWIZY can reach a (limited) top speed of 80 kmph. I was able to reach this on the N11. A maximum 57Nm (42lb ft) of torque is delivered straight from start-up. It has a quick-off-the-mark driving character, made even more fun by its responsive steering. The direct-rack system requires just 2.8 turns lock to lock, and the turning circle between kerbs is a city-friendly 6.8m. I had forgotten what it’s like to drive without power steering! 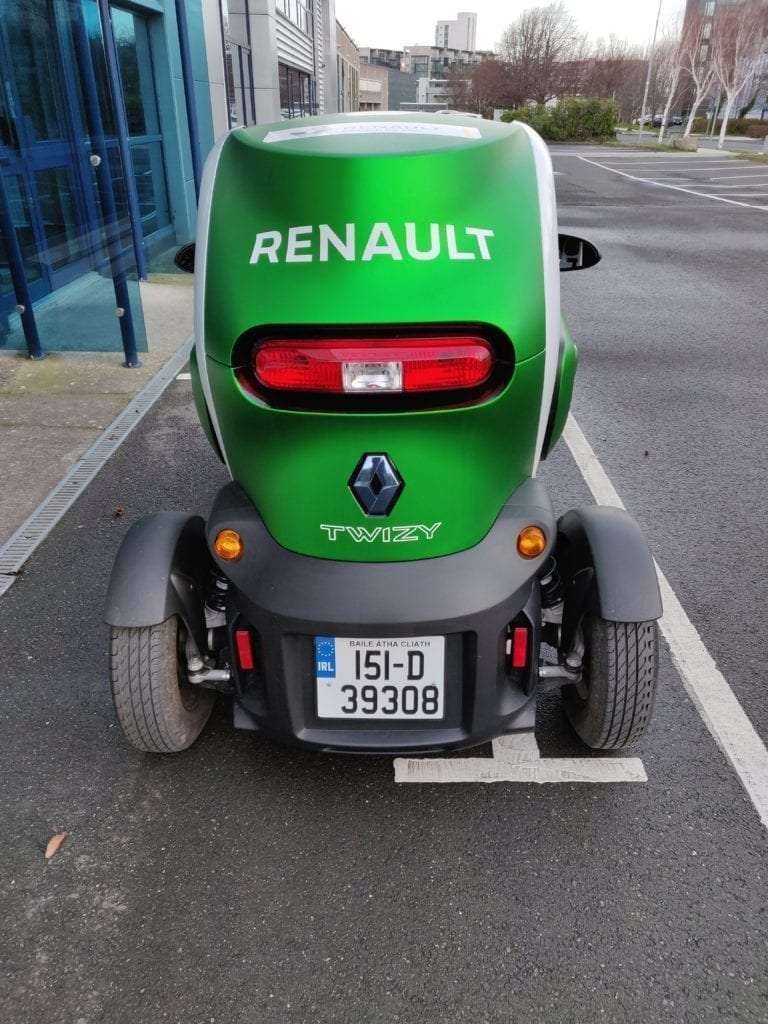 We really enjoyed having this car for the week. It’s not the most practical but for the sheer fun factor and bringing smiles to others faces, the TWIZY has it. What it doesn’t have are some pretty basic features for Irish drivers (like windows). You will not be driving this for it’s practicality.

Starting RRP for a new TWIZY is €9,995 or €149 a month without dealer delivery charges and the TWIZY battery is leased separately. We believe that an all inclusive price is going to be introduced this year. This has already happened in the UK.

If you do buy one of these you will be part of a very exclusive club in Ireland. There were only two sold in 2019 in all of Ireland. We can only see a very niche customer for the TWIZY and it will usually be for promotion purposes by a commercial entity. For this kind of money, you can buy a second hand 2013 Nissan LEAF or 2015 Renault ZOE but the more I think about it, the more I’d like to own one just to be different.

Video Review of the Renault Twizy

This review is in partnership with the EV Review Ireland YouTube Channel. See the latest update below