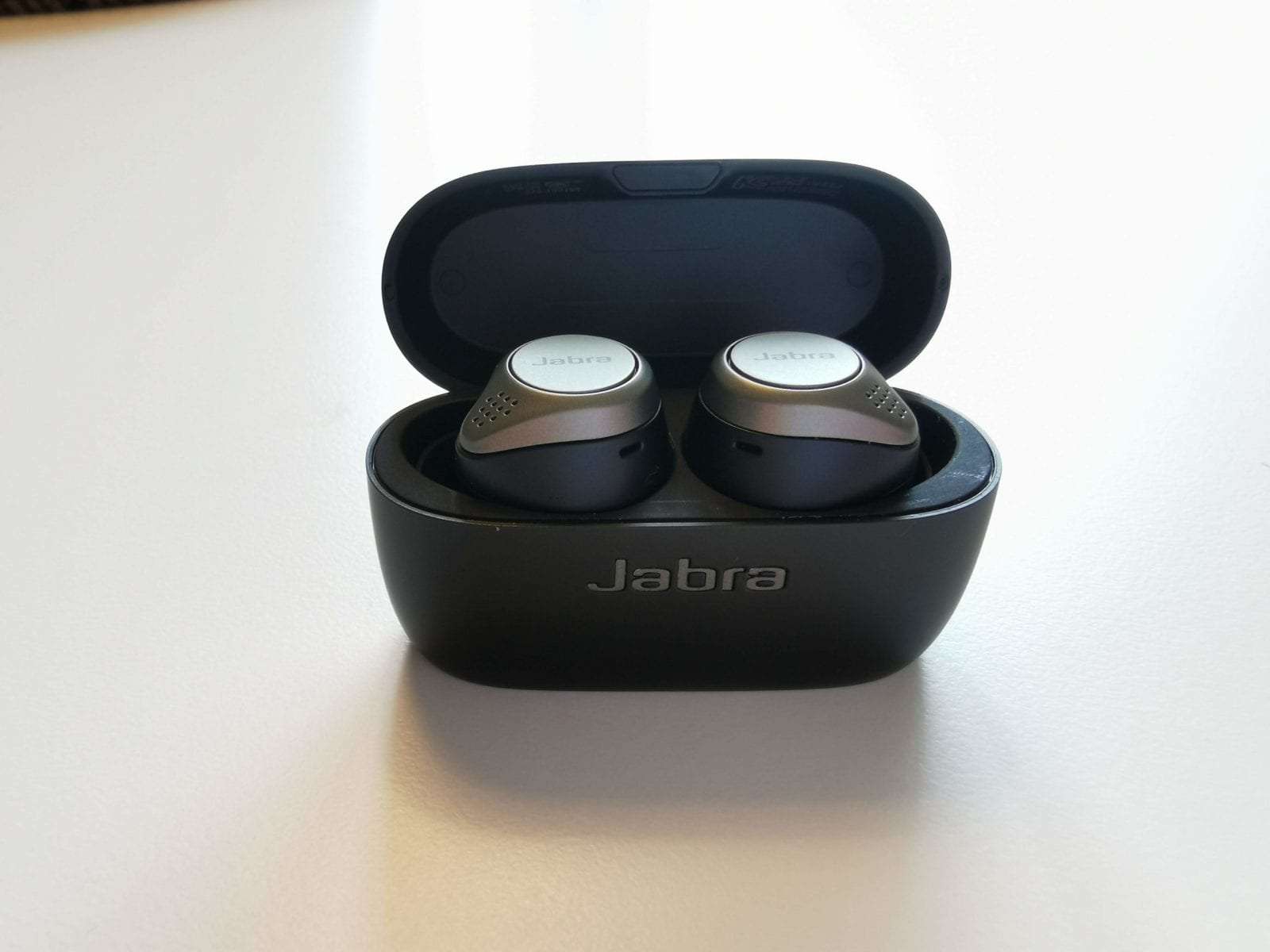 Wireless earbuds are swiftly turning into the standard way we listen to music and make calls from our smartphones. Tucked into our ears, they’re hassle-free and, with the wires gone, there’s a freedom we didn’t know we needed. Jabra’s latest, Jabra Elite 75t, are sleekly designed, fit well, and are easy to use. The company makes a wide variety of earphones and earbuds which we’ve tried a number of.

The Jabra Elite 75t are really a step above previous Jabra earbuds we’ve tested in the past. They connect to any virtual assistant on your phone: Siri, Alexa or Google Assistant, can handle calls and music — and priced fairly for their features. 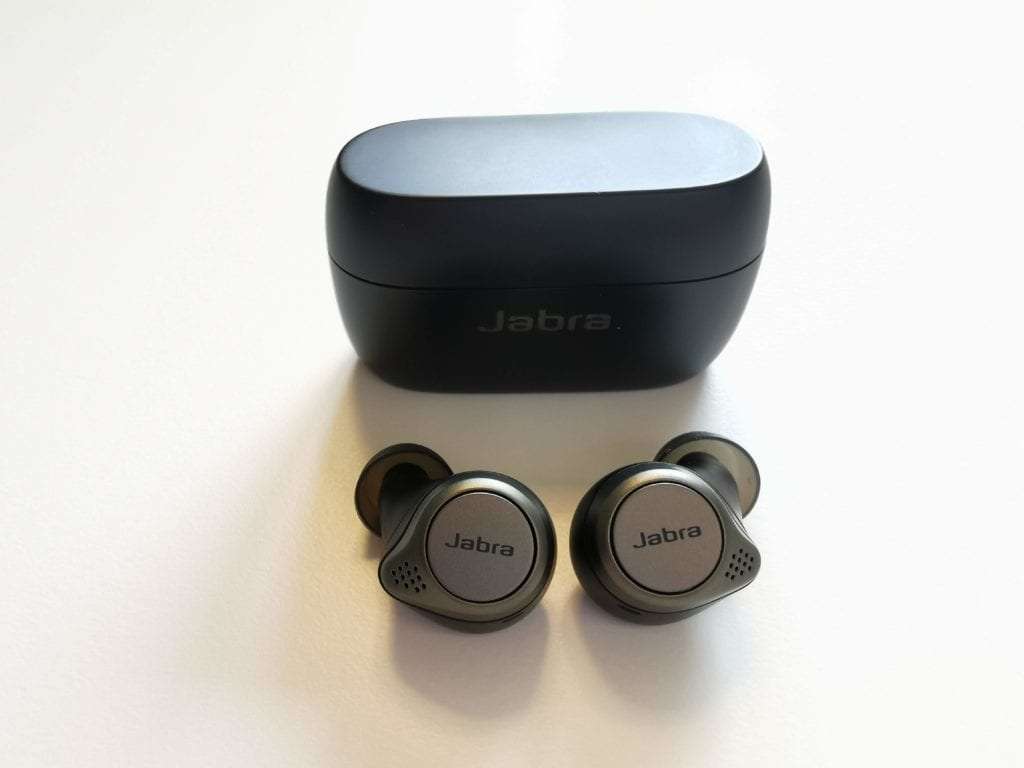 We opened the box, and plugged the earbuds into their case, getting both fully charged. We left them overnight — that’s probably not necessary, but certainly by the morning we were good to go. You can tell because the light on the actual earbuds are a bright solid green. They also held their charge well. I found I could go two days without needed to charge the case again — and I wore them constantly.

Thankfully, the case also charges via USB-Type C as well but there’s no wireless charging support, probably to keep costs down and also due to the small size of the charging case itself. 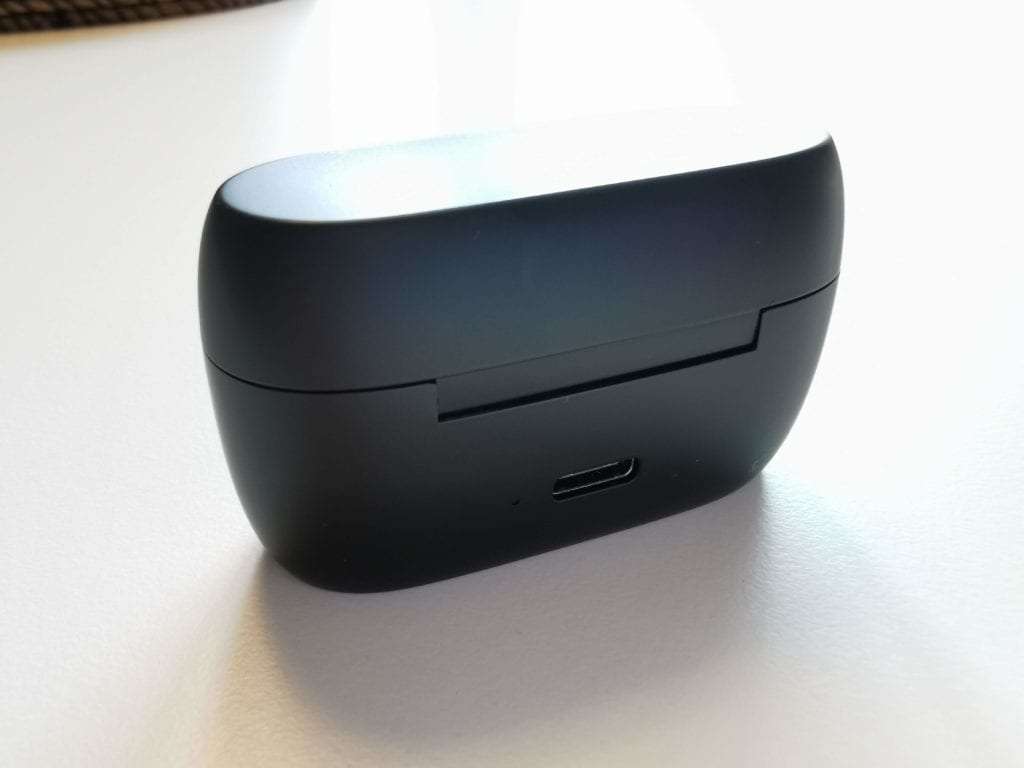 Next, you need to download the Jabra Sound+ app. From there, with Bluetooth enabled on your smartphone, you’ll want to click “Find my Jabra.” If you happen to have another pair, there’s an option for that too, “Pair new Jabra.”

Once they’re connected, you may need to update the operating system. (We certainly did.) Make sure your earbuds are close to your smartphone, and you’ll see their light change to a rapid, blinking blue. 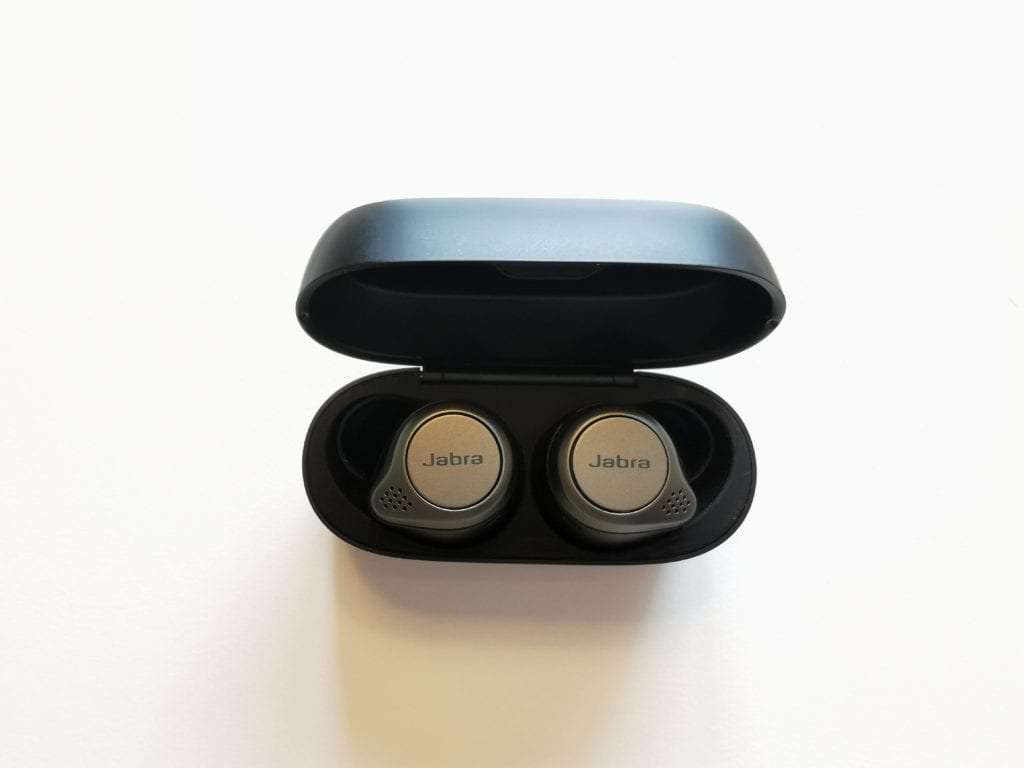 In the app, you’ll be able to track your earbuds if they’re lost, through Find My Jabra, set sound quality for different environments, like a commuter train, and most crucially adjust the different sound levels including bass and treble to create a sound more to your liking.

We’ve seen this kind of personalization before with Skullcandy. It’s a nice feature, and we did set some presets for music.

When it comes to wireless earbuds, the fit is everything.  The Jabra Elite 75t Earbuds felt really good in my ear, and they stayed in very well. If I dropped something and bent to pick it up, they felt fine and stayed in place. I’ve found the Huawei FreeBuds Lite can occasionally fall out. Both sets have differently-sized silicone ends that you can try to better fit your ear. And that definitely helped with the Jabra set.

Here the Jabra Elite 75t Earbuds won. I liked the smaller size, and that they almost disappeared in my ear when I wore them. That’s because they seem to go more into the ear when you wear them so they become very discreet when worn. 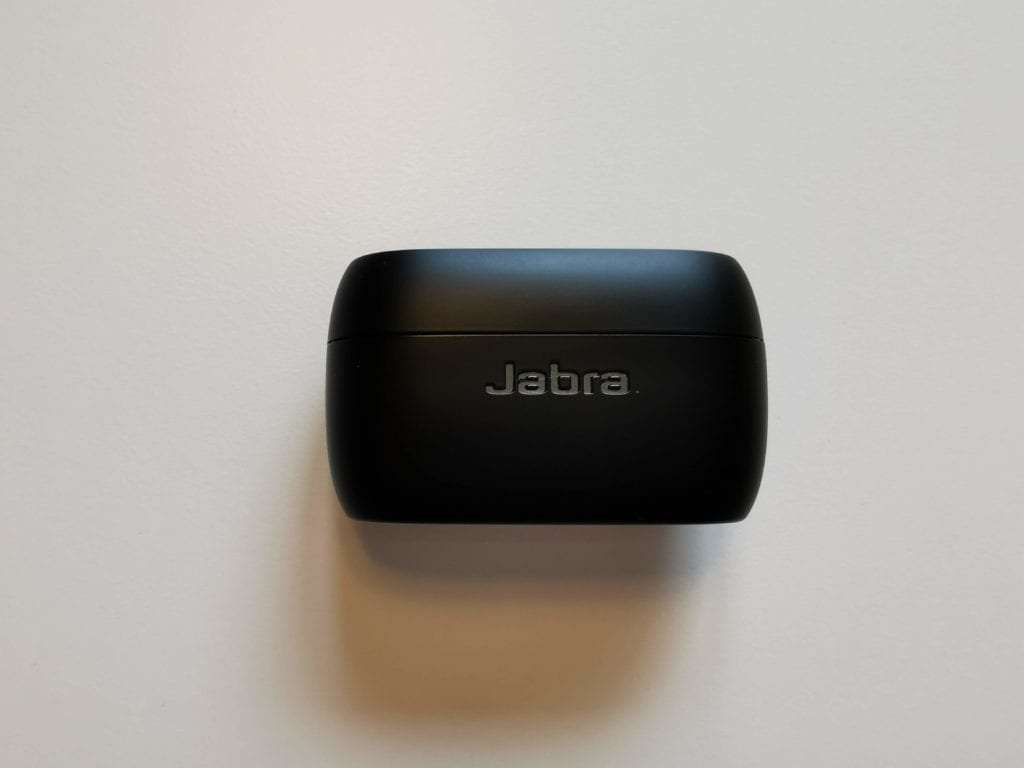 The carrying case is equally as discreet, almost, ironically, to a worrying degree. We’re all for non-bulky carrying cased for wireless earbuds but, as ridiculous as this may sound, the Elite 75t’s case is almost too small, making it that much easier to displace or even lose in its own right. I know this is a strange nitpick but just one to be aware of if you happen to lose earbuds (or even their cases) more than you’d like.

In terms of noise isolation, the Jabra Elite 75t Earbuds were great. Given their very small form factor and ergonomic design, their fit in the ear helped create a very good seal, even if they don’t actually have dedicated sound cancellation. You can also link to Alexa and Google Assistant as well along with iOS’s Siri voice assistant, which is to be expected these days from most mid to high tiered wireless earbuds.

Music quality was nice and well rounded, if a little bit on the bassy side. Thankfully, with the Sound+ app, you can play around with other audio presets and even create your own equalizer layout as well, to really get the audio to a point that suits your music listening preferences.

The Hearthrough feature, which allows you to switch on the mics on the earbuds to let in external sounds, was also very handy when out and about to hear nearby traffic and also when you don’t want to be taking them in and out of your ears each time you have a conversation with someone.

In terms of calls, the sound quality was excellent. Both the audio quality of the person on the other end of the line along with my own mic quality sounded great having tested them with a number of different contacts on my phone, so no issues there thankfully.

Jabra claims the Elite 75t’s can last up to 7.5 hours on a single charge, with the charging case carrying a total of 28 hours. From our own testing, we found this to be prettty spot on and the fast charging feature, which lets you to get up to an hour of battery from just 15 minutes of charging, is very handy when you’re running out the door but need to add some extra life to the earbuds for the day.

The Jabra Elite 75t Earbuds are a solid buy. They’re small, well-designed, have a great fit, can pick up calls, connect to voice assistants and have an app that lets you personalize the way you want to listen to music. The sound quality is also equally as impressive but you may need to use the app to help find that sweet spot as they may sound a little too bassy for some users. 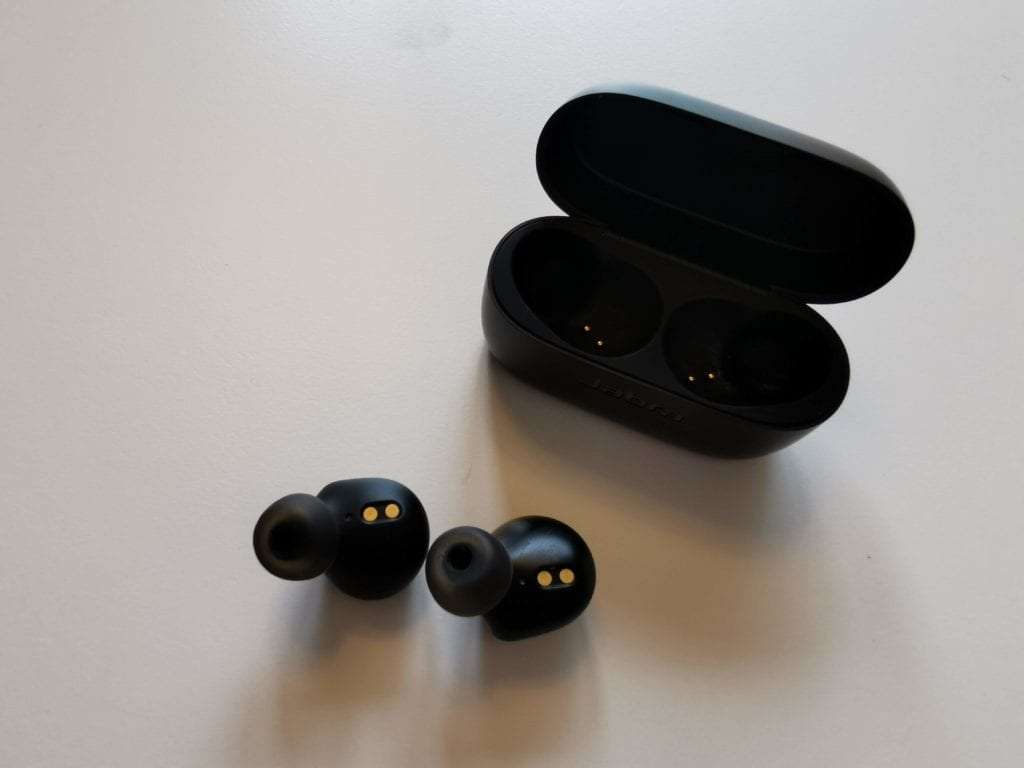