As the number of Electric Vehicles on Irish roads continues to rise, the insatiable demand for charge points continues unabated. A bit like marshmallows in your Lucky Charms, you can never have enough. ESB have been installing charge points around Ireland for a decade now, but it was only a matter of time before private competition entered the market. Keen to accept the challenge were Irish entrepreneurs Gerry Cash and Chris Kelly with EasyGo. 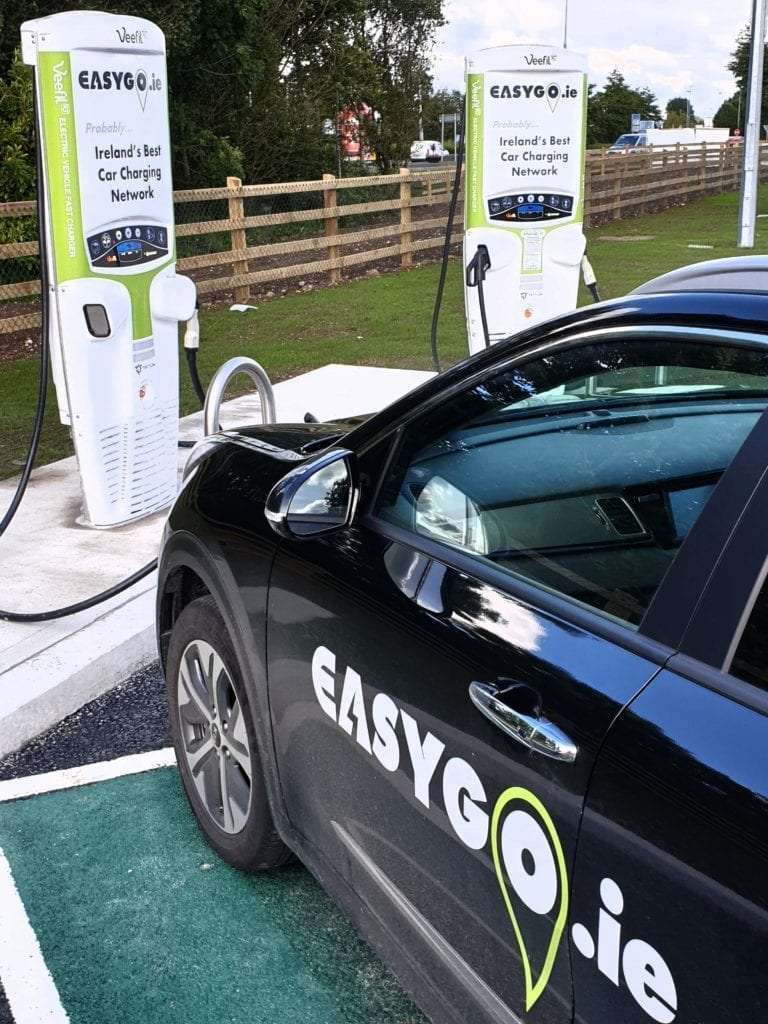 EasyGo is an Irish company that installs a range of EV charging points around the country. Their business operates in three main arenas: domestic, commercial and public network. They install domestic sockets under the CarCharger.ie brand using Wallbox chargers. On the commercial side, EasyGo are working with the likes of An Post to roll out the infrastructure needed to keep their electric fleet juiced up. This review, however, is focussed on EasyGo’s public charging points that keep you and I going on the roads, and especially those Rapid Chargers for long-distance trips across the country.

Unlike the Tesla Supercharger network, EasyGo are brand agnostic. They don’t care if you’re driving an original Nissan LEAF or a Porsche Taycan that cost you the price of a house. You just plug in, tap your fob and charge the car. There are some rare exceptions, but even a Tesla Model S or X can be used with an adaptor.

EasyGo’s AC chargers are located in sites such as Lidl car parks. You pull up, take your own cable from the boot and plug in. This EV driver’s 2016 Nissan LEAF can only take 3.6kW speeds from these posts, for about 30km of driving per hour charging. However, some cars such as the Tesla Model S and the more reasonably priced Renault Zoe can take the full 22kW, enough to cover 150km in most cases.

Tritium manufactures the DC Rapid Chargers that EasyGo employs in Ireland. They opted for the Veefil-RT 50kW. These units have a liquid-cooled system that increases the reliability of the units, something crucial to EV drivers. Although more expensive than some other DC units, the payoff is less maintenance and less down-time. The Veefil-RT units are equipped with two connectors, CHAdeMo and CCS. This covers the vast majority of EVs in the country, with the notable exception being the older generation of Renault Zoe. Even Tesla Model S and X drivers can use the units if they bring along an adaptor. 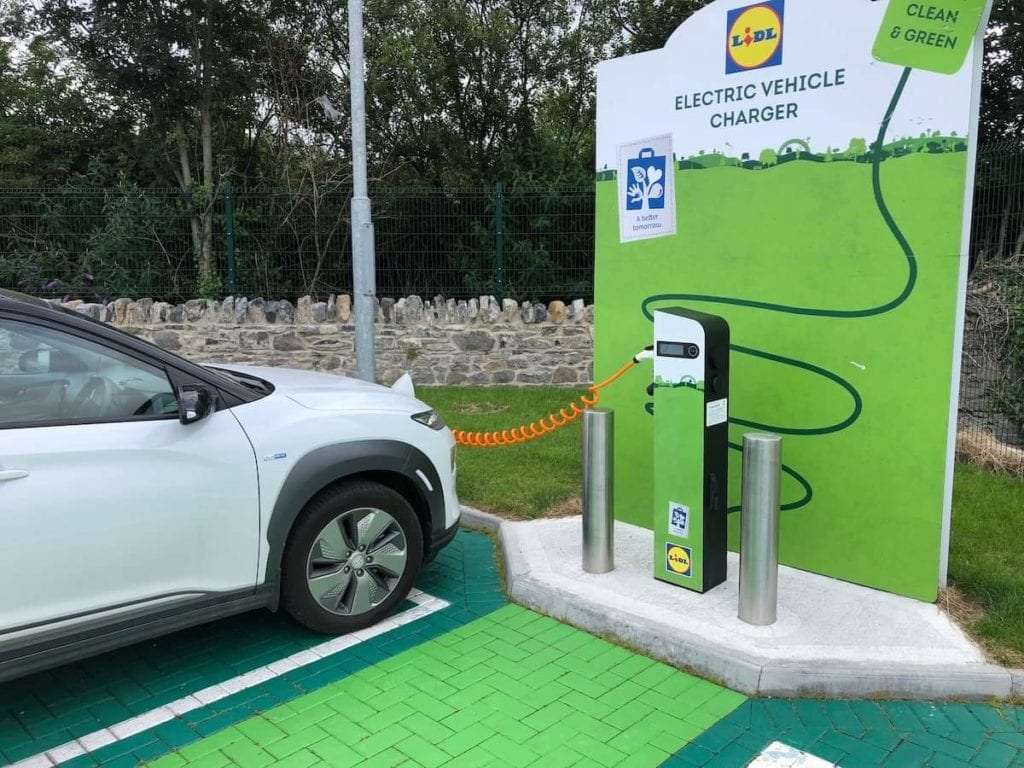 Where are the chargers?

At the time of writing, EasyGo has 423 AC chargers around Ireland. Most of these are in locations such as supermarket car parks. Some are restricted as they are located at places like car dealerships. There are 8 DC Rapid Chargers, mostly located on the main thoroughfares around Ireland.

EasyGo partnered with Gireve last year as a Charge Point Operator. This May, the relationship was enhanced when EasyGo became a full e-Mobility Services Provider. This means that EasyGo customers can use their app and their fob on all ESB and IONITY chargers also. It is a step forward in simplifying the charging experience for EV drivers. The Holy Grail of Tap and Go charging using your credit card still eludes us in Ireland, but this move does get us a little closer.

But what if I’m travelling to Europe on a road trip? As with ESB and IONITY, EasyGo’s relationship with Gireve is an international partnership that spans 25 countries, 164 charging networks and 80,000 charge points. Admittedly, this EV driver hasn’t yet tested it in a Dublin to Bucharest road trip, but we’ll take their word for it.

The Rapid Charger units are equipped to charge at speeds up to 50kW. This means that they can put up to 50 units of electricity into the car in one hour. There may be limitations to this depending on the car you drive. For example, this writer’s 2016 LEAF will max out at about 45kW, before slowing down significantly as the battery moves past 80%. However, most modern EVs are capable of taking a good deal more than the 50kW EasyGo units can offer. You’ll see speeds of around 70kW in cars such as the popular Hyundai Kona. Beyond that, the luxurious Audi e-tron will take up to 150kW. The Porsche Taycan and Tesla Model 3 can take about 250kW in peak conditions.

EasyGo haven’t future-proofed their chargers or supplied the most advanced technology available. Tesla and IONITY are providing 150kW speeds, and are beginning to roll out new technology that is bringing these speeds to 250kW and 350kW respectively. However, in a country the size of Ireland, it will seldom matter. From Dublin Airport to Cork Airport and back again in a Hyundai Kona can be done with a single 30min stop on an EasyGo 50kW charger. And who would do a 540km, 5-hour round trip without a short lunch break anyway? If you’ve charged up on night-time electricity at home before you set out, the round trip has cost you as little as €15.00. 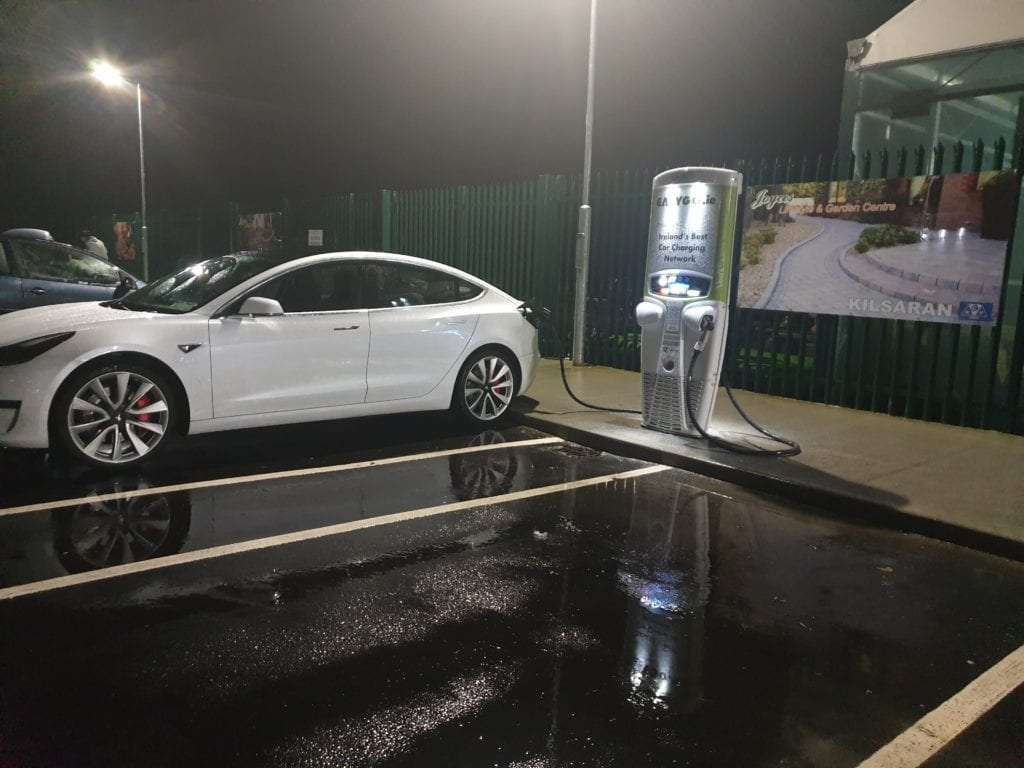 Most of the 22kW AC charge points are free around Ireland. Let’s say you pull up to a 22kW AC post Lidl in a Renault Zoe and spend an hour getting your shopping and faffing about with trolleys. In that time you’ll put in about 22kWh, enough to cover 150km of driving for free. Not bad for the twenty seconds it takes you to plug the car in and out.

Fees for the DC Rapid Chargers are quite similar to other networks, with the notable exception of IONITY’s eye-watering, but mostly inconsequential, non-subscription rate of €0.79. EasyGo charge a connection fee of €0.24 and then €0.35 per kWh. So a one-hour charge from 20% to about 70% in a Tesla Model S Long Range will cost you under €20. Very straightforward. To dissuade users from hogging the chargers, you get a €0.35 per minute overstay fee after one hour.

You can pay for EasyGo chargers in two ways. This EV driver has the PrePay subscription account. It takes a few minutes to set up. You give your card details and lodge some money to your account. If you top up by €20, they send out a free fob that you can just leave in your car and swipe to charge. You can always just use the Pay As You Go model if you don’t envisage yourself using the network more than a handful of times.

EasyGo has an App to help EV drivers. It’s perfectly functional and has some useful features. You can search for charge points around the country, monitor your current charging session, and top up your balance if needed. One drawback is that the app shows some charge points that are not open to the public. Although it forces you to double check the point’s availability, it is a minor issue.

All the signs point to a bright future for EasyGo. Their short history shows a record of quickly rolling out chargers, responding to customer feedback, and importantly fixing issues with their units. Their down-time for DC Rapid Chargers is, according to EasyGo, less than 1%. It is not uncommon to see a Twitter post from EasyGo saying that a particular charger was reported as faulty but will be fixed by engineers the following day. For their DC units, EasyGo assure customers that any faults will be addressed within 24 hours.

The only significant drawback is that there are not enough EasyGo Rapid Chargers. We welcome the significant rollout of AC chargers located at destinations such as supermarkets. However, it is a comprehensive array of Rapid Chargers across the island that will more readily convince the public to make the switch to EVs.

It is fantastic to see an Irish company rise to the challenge of providing electric car chargers. Their short history has shown EasyGo to be ambitious and conscientious in their approach. Their future bodes well, and hopefully we’ll be seeing many more of their reliable Rapid Chargers soon.

Thanks to Blake Boland from EV Life Ireland for this review. See Blake’s IONITY network in Ireland review here and his coverage of the Ohme announcement of their entry into the Irish market here. 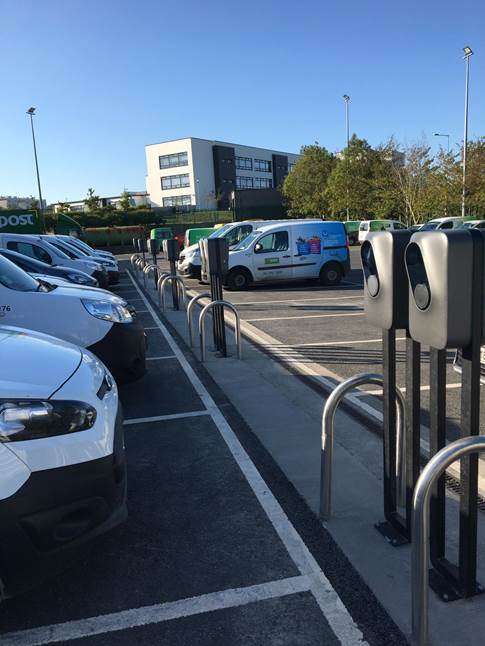