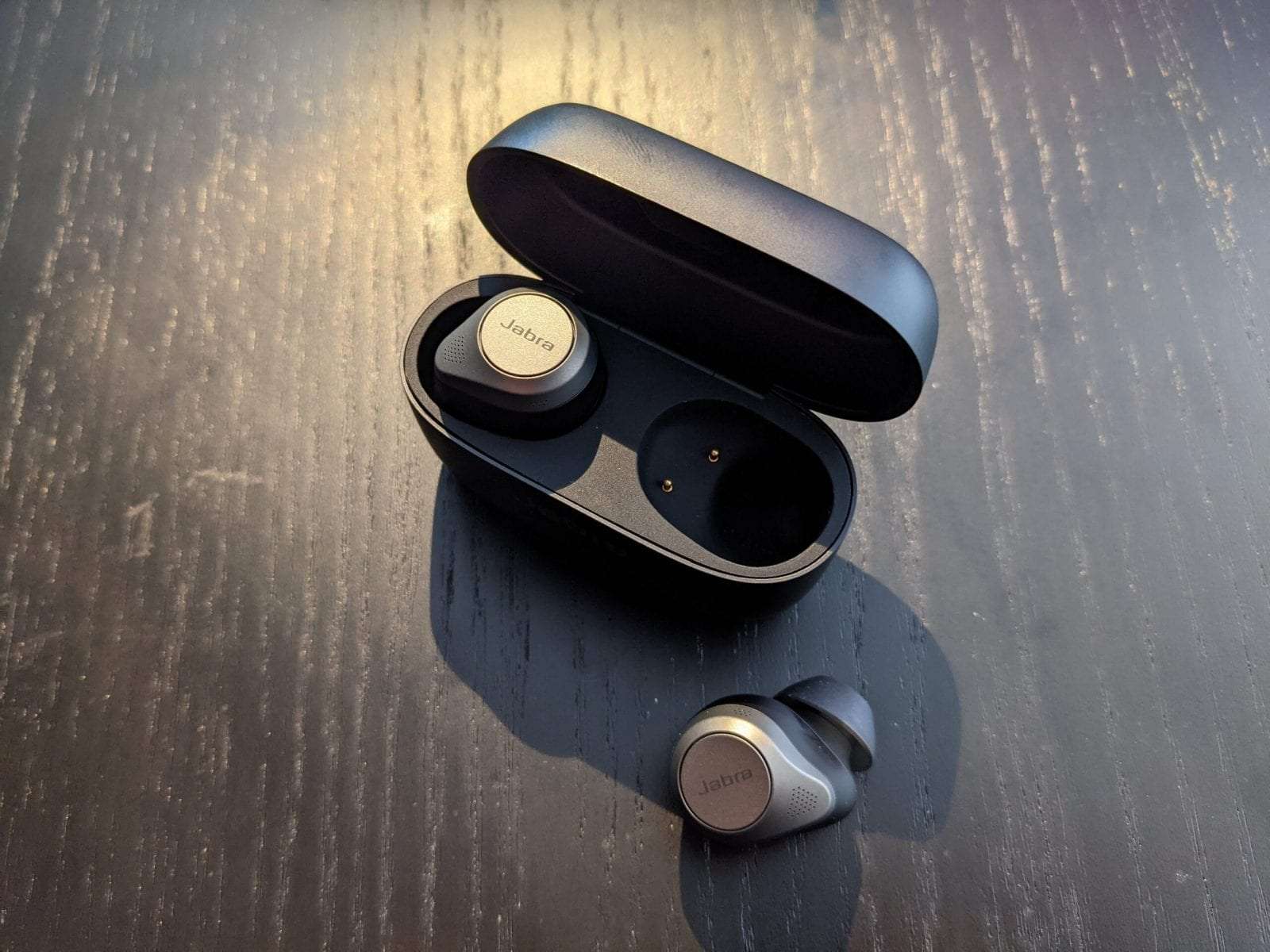 Following on from exceptional earbud launches like the Elite Active 65t and Elite 75t, Jabra’s solid reputation flows through the Elite 85t noise-cancelling earbuds. And it’s clear the brand aren’t wasting their resources, significantly raising their game even further by offering what is perhaps one of the very best options in True Wireless earbuds to date.

I already knew what Jabra is capable of with the very impressive Jabra Elite Active 75t easily my favourite earbuds on the market. Are the Elite 85t just as good? Absolutely. 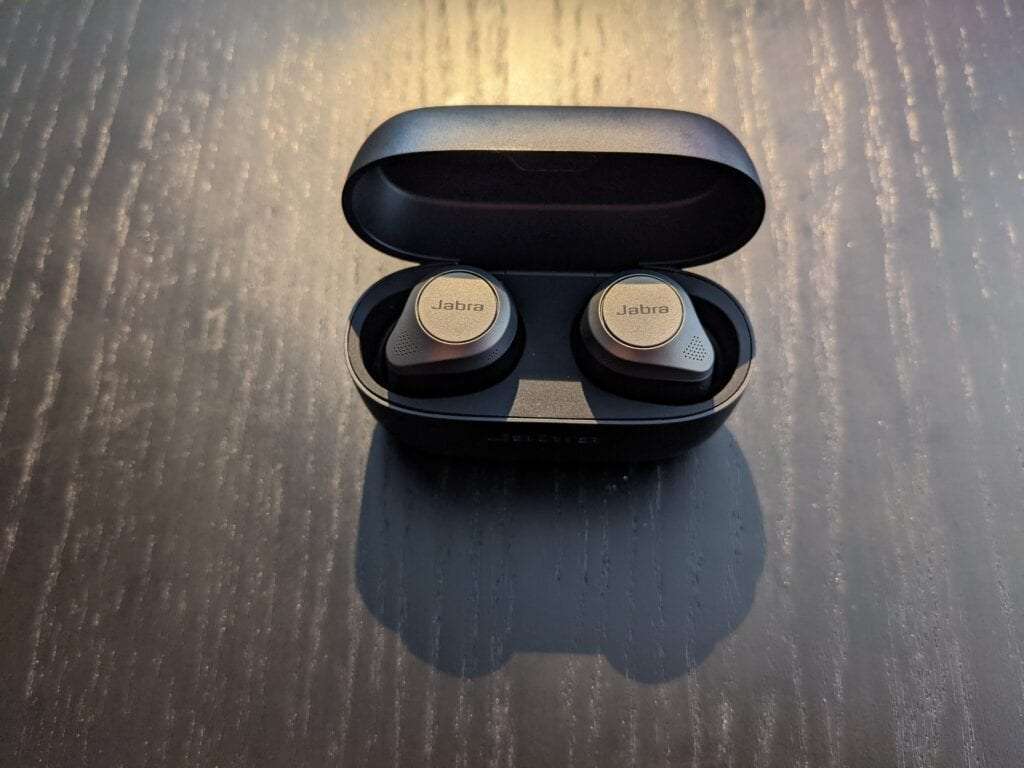 As good as capacitive touch control can be, the surface area on an earbud is just too small to justify it. Touch controls are fine on bigger over-ear headphones, but when it comes to small buds, they can feel finnicky and overstuffed. Which is why I appreciate Jabra’s commitment to physical tactile buttons to control most of the functionality quickly and seamlessly.

Around the all-plastic buds is a single button on each earbud, supporting functionality via single, double or triple presses to control playback, toggle ANC, and activate a connected device’s voice assistant (Google Assistant and Siri, with Alexa coming soon). Given it’s just one button each, the functionality could have easily felt overstuffed, but Jabra has made the wise decision to allow users to customise the buttons entirely via the Jabra Sound+ app. There are only a few earbuds that allow you do completely customise the functionality map, so this is definitely a welcome inclusion.

The sensor used to pause music upon removal or the buds, and resume once they are re-inserted also works reliably well and in my weeks of using the pair, I’ve never once had an issue with the function not working in an instant. 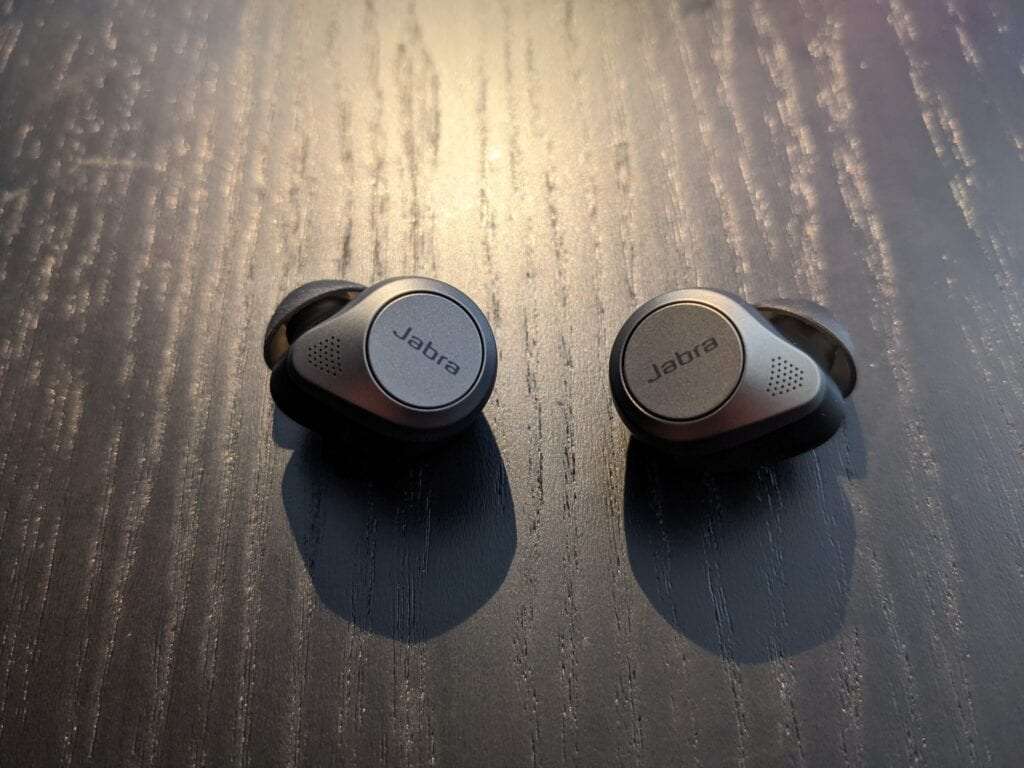 As for the feel of the buds. The all-plastic body with a smooth matte finish looks and feel premium, but the titanium-black colourway looks a bit boring when compared to the other models Jabra plans to roll out in the coming months, which include gold-beige and copper-black.

There’s slightly more surface area to these than the other models, slightly longer and heavier but still lightweight and comfortable enough to fit snugly in the ears. They could stand to be more comfortable though, with fatigue setting in after a few hours thanks to the slightly more shallow fit, meaning these buds rest on the ears and can irritate the bone after awhile.

As for the plastic flip-top charging case, Jabra hasn’t switching it up much from the 75t. It’s slightly larger, but still feels durable enough that scratches are of no concern. It’s slim enough to quickly slide into a pocket without getting that awkward bulge. 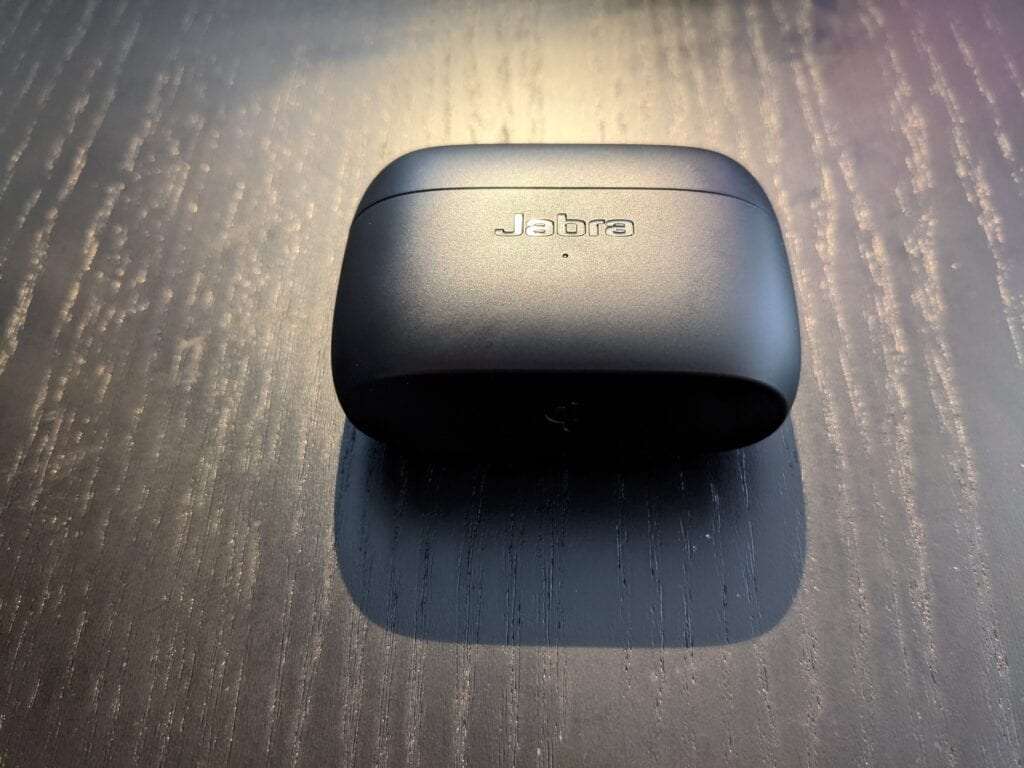 An IPX4 rating feels like a downgrade – because it is – so I’d suggest keeping these nice and protected from any heavy rain.

Sony, Bose and Sennheiser may be the dominate names in the game, but Jabra is making a strong case for glory in this competitive market. The sound signature has clearly been tightened and refined from the Elite 75t, and while the 85t’s may use the same processor, work has been done to better balance the profile so that the bass isn’t as forward. What you get here is an elegant, detailed signature that has excellent dynamic range with richer mids and vibrant highs, without sacrificing that beautiful, deep and nuanced bass Jabra has become known for.

Jabra’s Sound+ app includes one of the best and most intuitive fully customisable EQ’s I’ve been able to play around with, giving me what I need to dial in the exact signature I want. The default is balanced enough, but it’s easy to bring the bass forward a bit when I want to pop on some more heavy bass tracks, and give more preference to vocals when I switch it over to more acoustic, vocal-led tracks.

Thanks to a custom ANC chip, noise-cancelling is able to be toggled between five distinctive levels, as well as “hearthrough” mode for ambient listening without disturbing the music.

You can’t switch as quickly between these unless you’ve got the app on hand, but each level is excellent at blocking out a different degree of outside noise. On the highest level of ANC, virtually every sound on my daily commute was eliminated except for the more high-pitched tones like clattering cutlery.

No less than six microphone have been included across the two buds, meaning interacting with a voice assistant doesn’t require any unnecessary shouting in public places, and phone calls are fine. In fact, this is one area where I feel they have the Sony’s, and just about every other in-ears I’ve tested, beat. 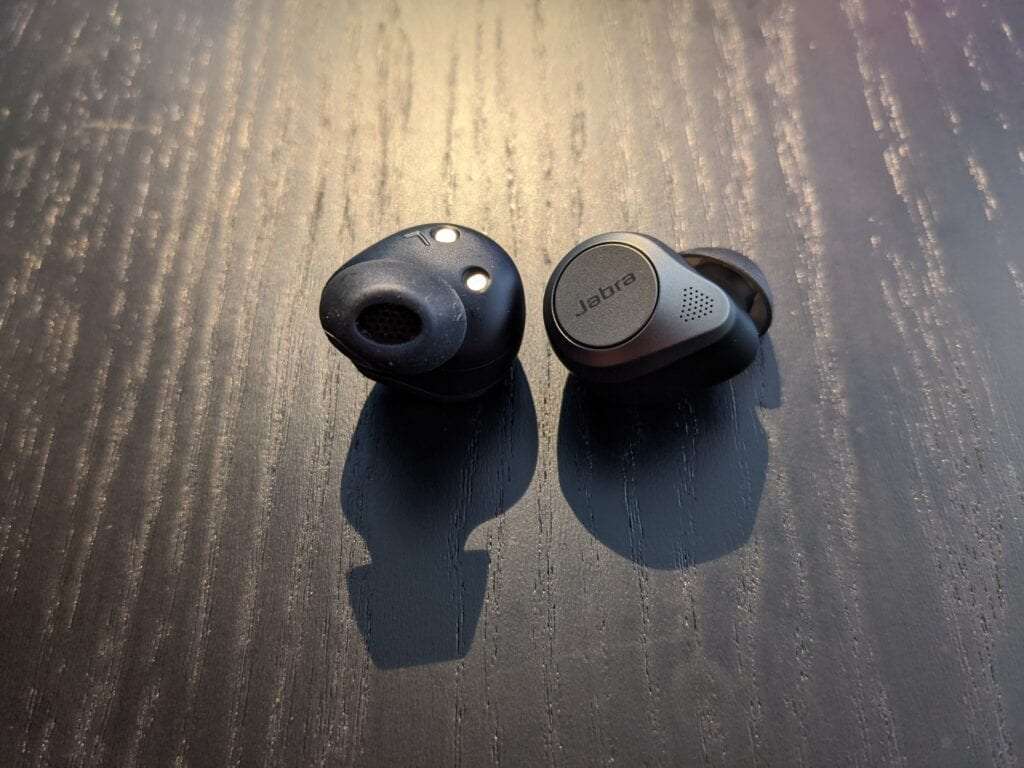 Jabra’s implementation of multipoint connectivity also seems to work better here than it has on previous models. These are some of the only earbuds you’ll find that can be connected to two devices at once, simultaneously, and prioritise based on whatever source is making audio demands at the moment. Theoretically, this means you can have these buds connected to your PC and phone at the same time, and while you’re listening to music on your PC, if a call comes through on the phone, you won’t have to manually switch in order to answer.

Considering the buds as a standalone device, you’re looking at 7.5 hours of battery life (with ANC off) and 5.5 hours (with ANC). That’s slightly behind the Sony’s, but the chip Jabra uses must be quite nifty at power management. Combined with the charging case, you’ve got a total of 28 hours (no ANC) and 24 hours (ANC), which is still slightly behind competing models and also even less than the 75t’s. However, this is still, easily, a full day of use and then some. Plus, the buds can juice up quite fast, with 15 minutes giving you at least 1 hour of playback. 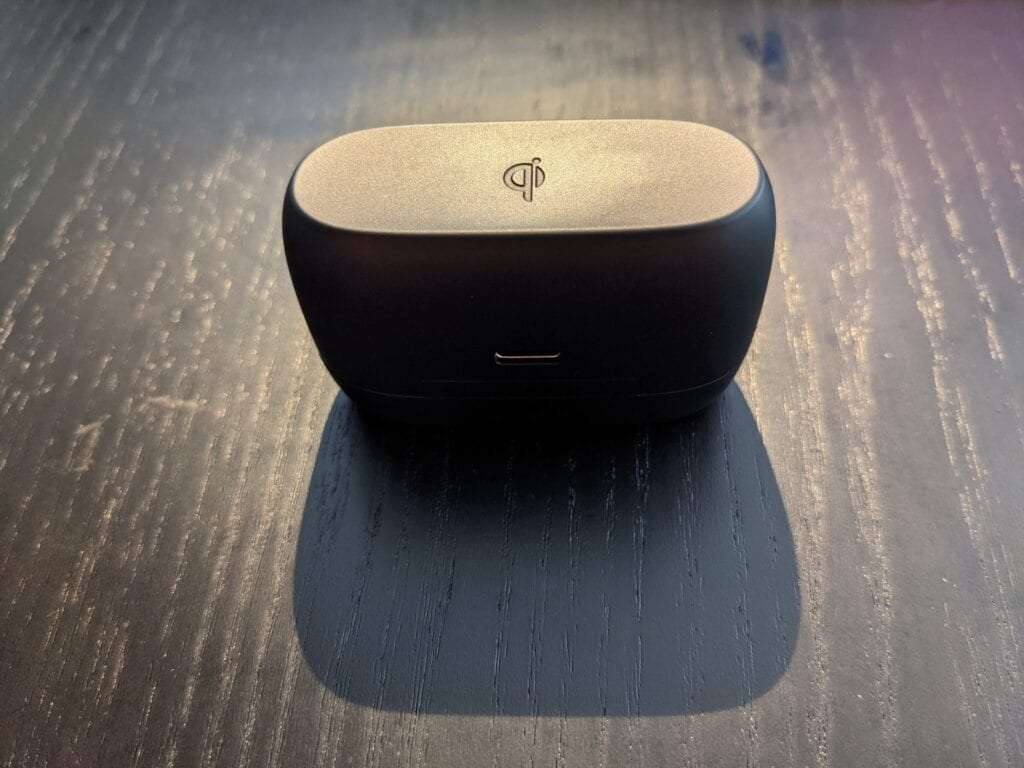 For those who appreciate wireless charging, the 85t’s are the first in Jabra’s Elite series that offer the feature out of the box, which is a really nice addition.

If Jabra hadn’t already shot right up to play amongst the top of the range in this competitive market, the brand has certainly made an impression with the Elite 85t. They are consistently building towards becoming one of the best options on the market, and while they still have a slightly longer route to best rivals like Sony, Bose and Sennheiser, these buds do a lot to place Jabra in a very good position.

There are better options out there when it comes to battery life and long-lasting comfort, but seamless multipoint, incredible noise cancellation, customisable controls, and exceptional, flexible sound, means that the Elite 85t do plenty to earn that ambitious price tag. The Jabra Elite 85t are available for €229.99 from Jabra.com and HarveyNorman.ie. 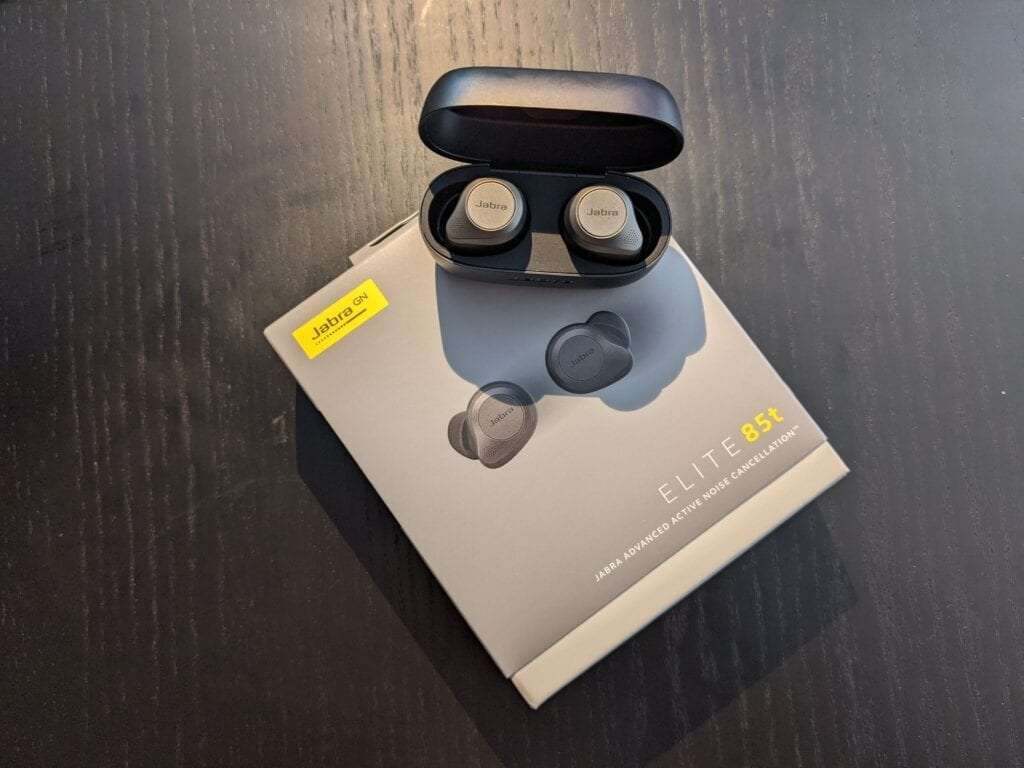