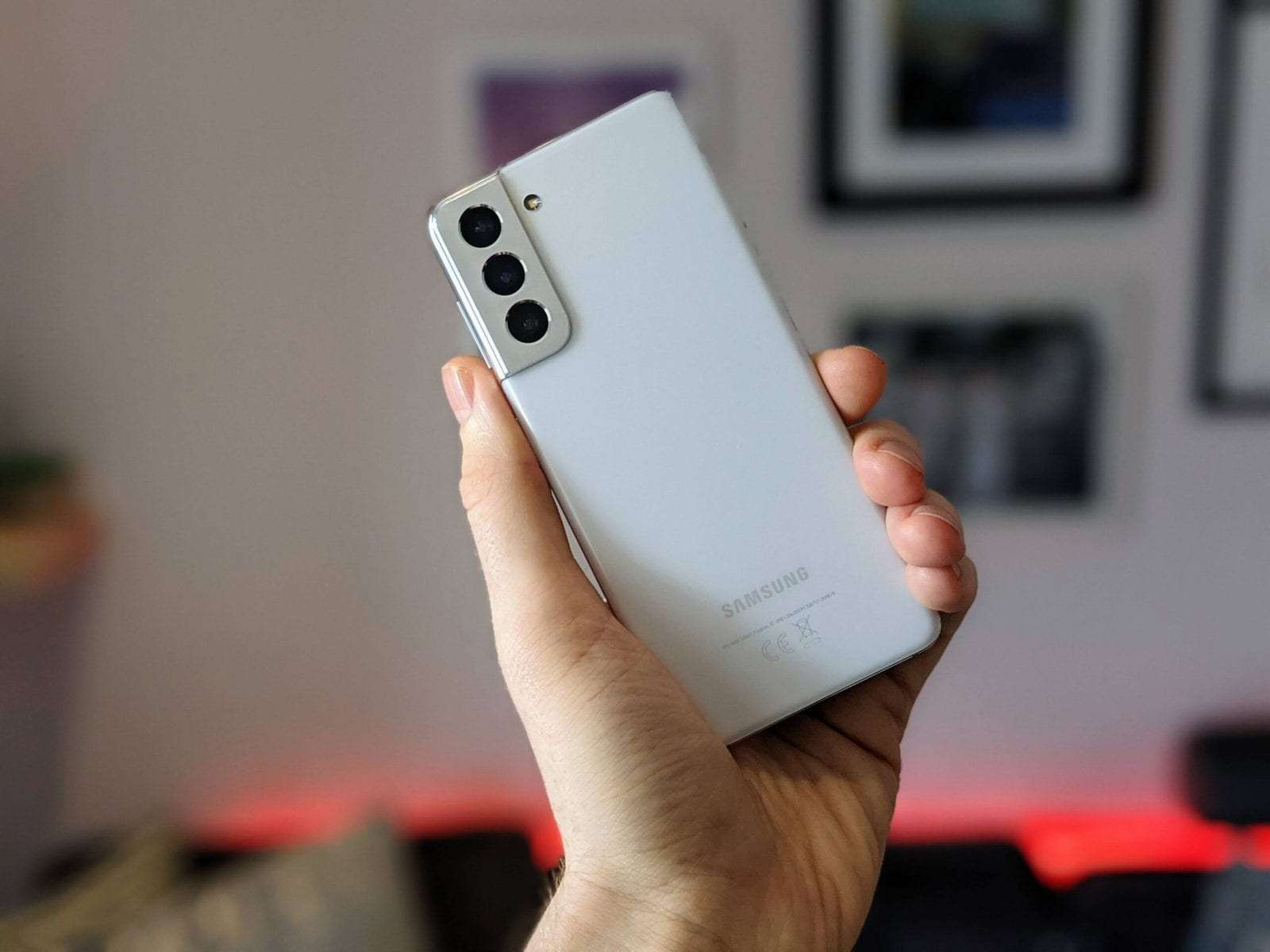 REVIEW: Samsung Galaxy S21 – A Galaxy for the Masses

The new Samsung Galaxy S21 is here. It arrived a couple of months earlier than usual this year, though the timing of the launch wasn’t the only shake up to the norm Samsung was planning with their new line of phones. Samsung has also bucked its trend of actually upgrading (most of) the hardware inside its most popular S device. And while the new Samsung Galaxy S21 looks very different from last year’s S20 on the outside – it actually shares a lot of similarities on the inside.

The biggest difference, other than the design, is the price. Last year, Samsung’s flagship smartphone, the Galaxy S20, cost €1029 at launch. The new Samsung Galaxy S21 device is coming in at €879. Does the low price mean the Galaxy S21 is a worse phone than last year’s Galaxy S20? It’s complicated.

The Galaxy S21 is a very similar phone to the Galaxy S20, but it’s trimmed some of the unimportant bits that made last year’s device more expensive. For example, the new S21 has no wrap-around display, a lower-resolution screen, 4GB less RAM, a plastic rear, and it comes with no charger or headphones bundled in the box. And most people won’t miss these features. So yes, in a lot of ways it’s a less premium device. But the new Exynos 2100 processor makes up for that.

I like the new design. I’ve never been one to care much about having a glass back, so the polycarbonate plastic rear – or “glassic” as Samsung is keen to push – is fine. And the colours – Phantom Violet, Phantom Grey, Phantom White and Phantom Pink – seem fine too. A lot of noise has been made about Samsung’s new, slimmer, camera bump. And yes, it is thinner than before. Which is obviously a good thing. 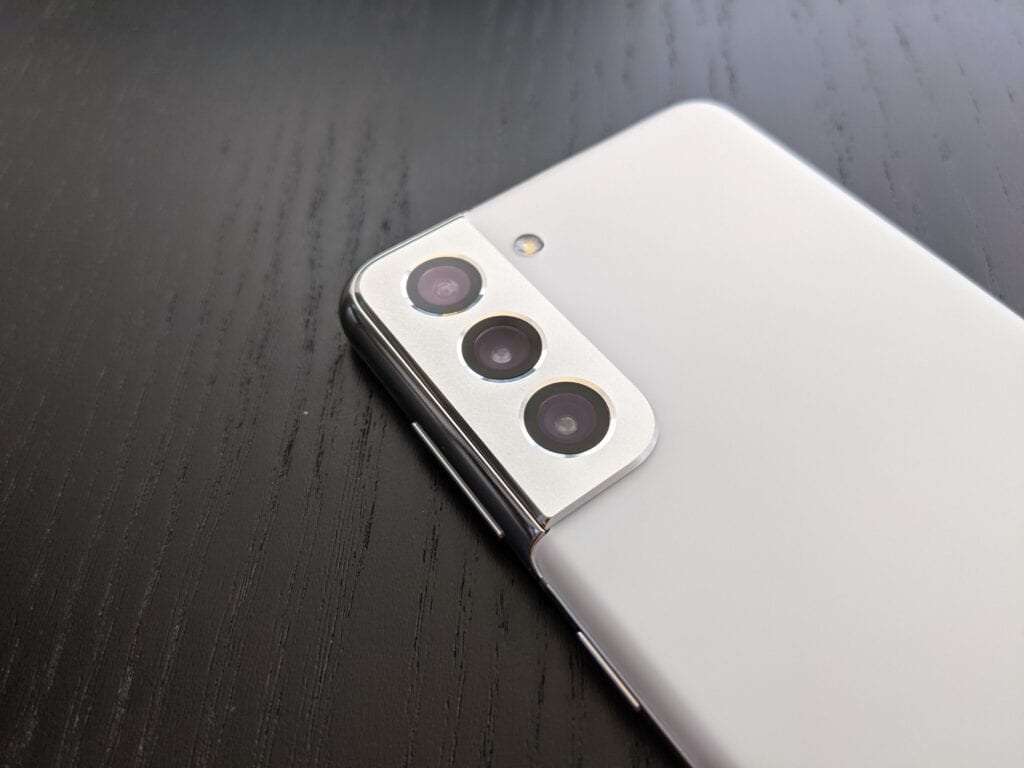 So the old Galaxy designs – or any phone’s camera bump for that matter – never offended me like it did some, as they were always levelled out by the case. However, if you’re the sort of person who is kept up late at night worrying about camera bumps – good news: it’s less bumpy in the S21.

The device’s biggest improvement is the Exynos 2100 processor, that introduces 5nm transistors. Meaning the Galaxy S21 is a more powerful and power-efficient device, as its chipset can (in theory) perform more calculations without getting too hot thanks to the 5nm technology.

This, of course, has a knock-on effect on the rest of the phone. Samsung is keen to point out that this technology allows it to make significant gains in image processing and battery performance, for example (more on that later).

There’s a 6.2-inch FHD+ 1080 x 2400 AMOLED display on the S21. And it’s fine too. But it’s a less sharp display than last year’s S20, which boasted a 1440 x 3200-pixel screen. The S21 boasts a 120Hz display (just like the S20) that dynamically optimises the refresh rate for what you’re doing with every touch. Peaking at 120Hz for intensive tasks such as gaming, while dropping down to as low as 48Hz, and thus saving battery, for low-intensive tasks such as reading an article in a news app. 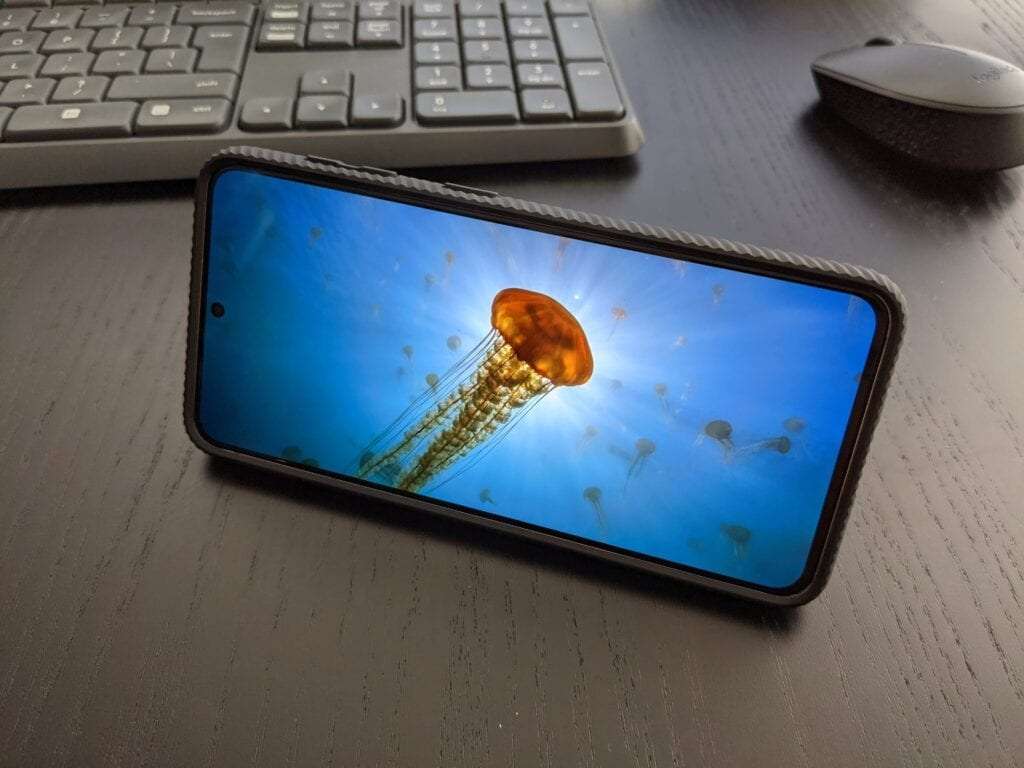 I fear that the downgraded specs of the S21 are going to overshadow what important here. The Samsung Galaxy S21’s 1080 x 2400 AMOLED 120Hz screen is still really good. More than good enough, in fact. It looks great, and users will love it. Had nobody told me it was a slightly less ‘pixel-dense’ screen, I doubt I’d have noticed.

The camera set up on the Galaxy S21 is the same as last year’s Galaxy S20, it’s just a little bit slimmer – which, like I said earlier, is good news from a design perspective. It’s probably the least offensive camera bumps of any modern smartphone (with a good camera). You still get three rear-facing cameras on offer: a 12-megapixel main camera lens, a 12-megapixel wide-angle lens, and a 64-megapixel telephoto lens (up to 30X zoom). There’s also a very good 10-megapixel front-facing camera too. 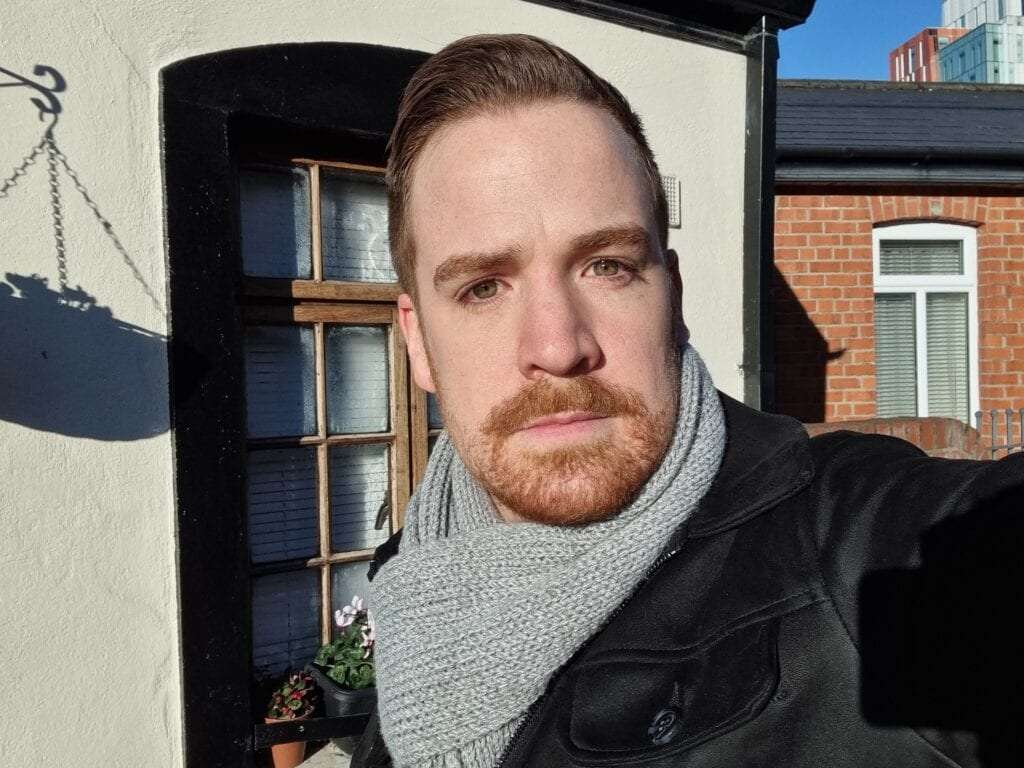 Should we be annoyed about the lack of upgrades to the camera? I’m not sure. It’s important to remember that last year’s S20 saw Samsung’s biggest sensor upgrade in its smartphone history. So no, on balance, I don’t think we should feel too upset about not seeing any changes in hardware with the S21. Instead, this year’s camera improvements can be found in Samsung’s image-processing software, as the move to a 5nm chipset allows the Galaxy S21 to do more with the same image. It’s a fair enough claim. AI and image processing is a large part of smartphone photography these days.

The telephoto capabilities of the new handset are much better than I thought they would be. Samsung has improved the software that ‘tidies up’ the image when at the full 30X so, although you probably won’t be posting them to your Instagram wall, they’re much more refined and can actually help you discern far off details. Here are 4 photos, taken from the same spot, showing the ultra-wide, 3x, 10x and 30x zoom levels: 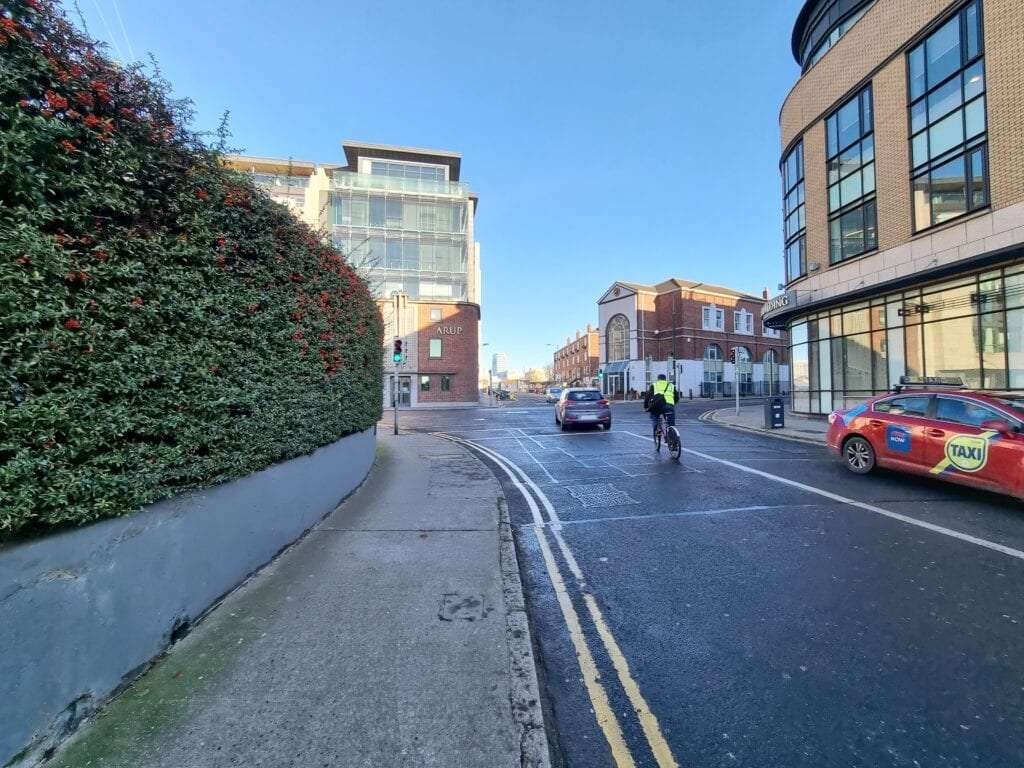 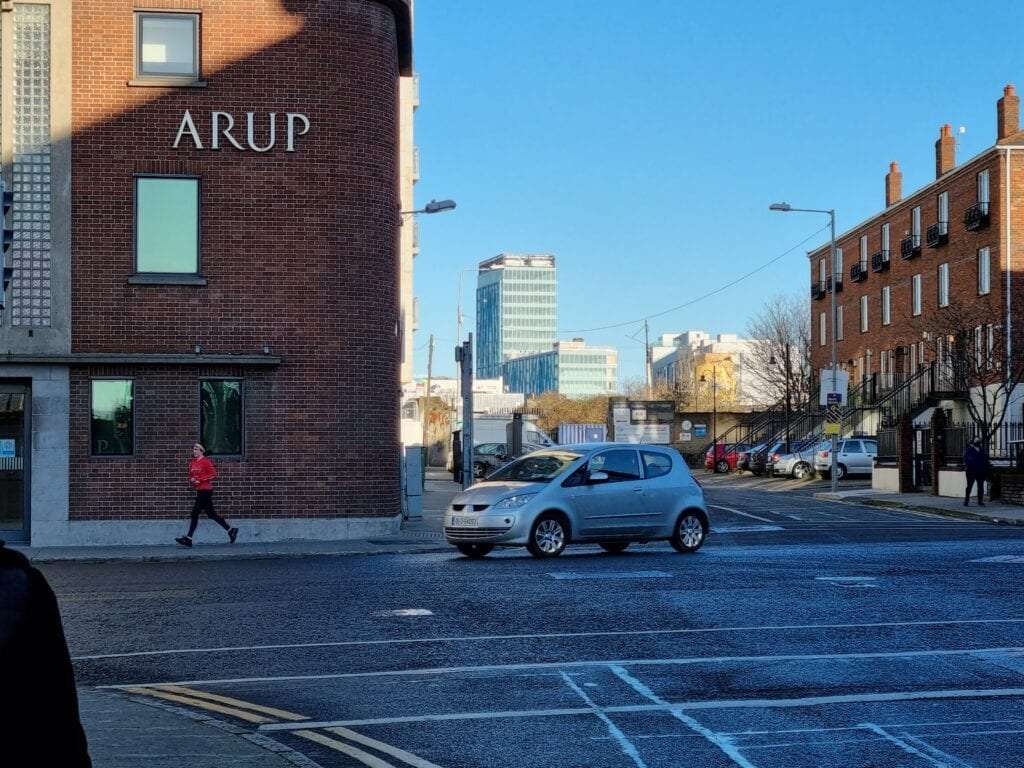 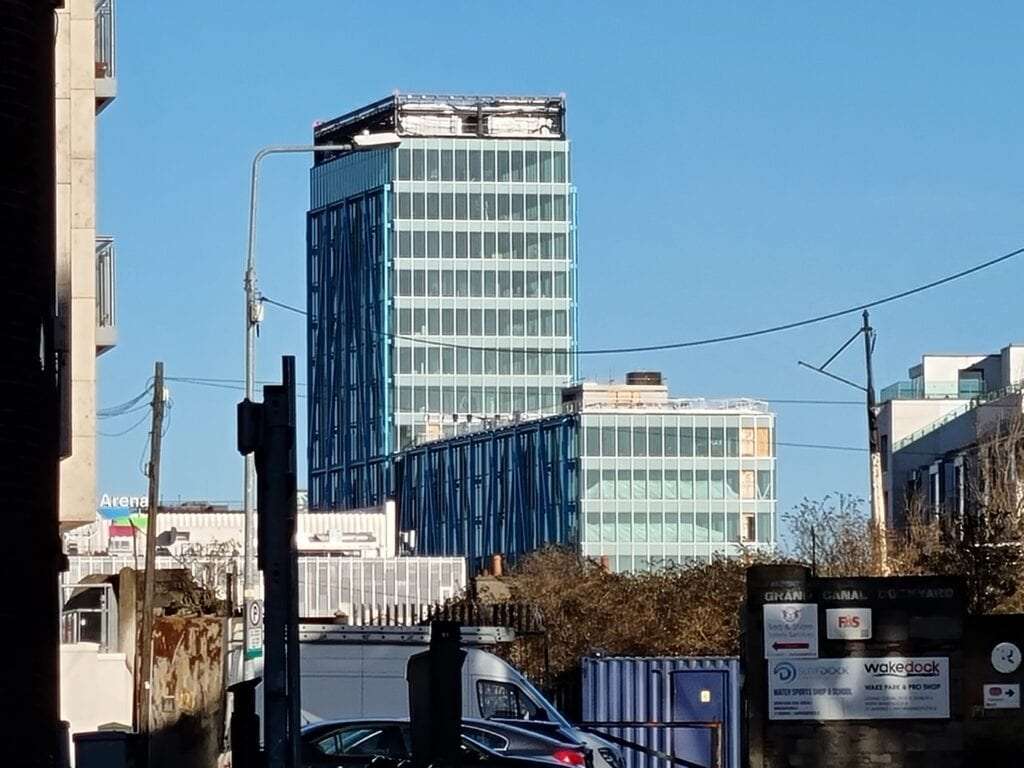 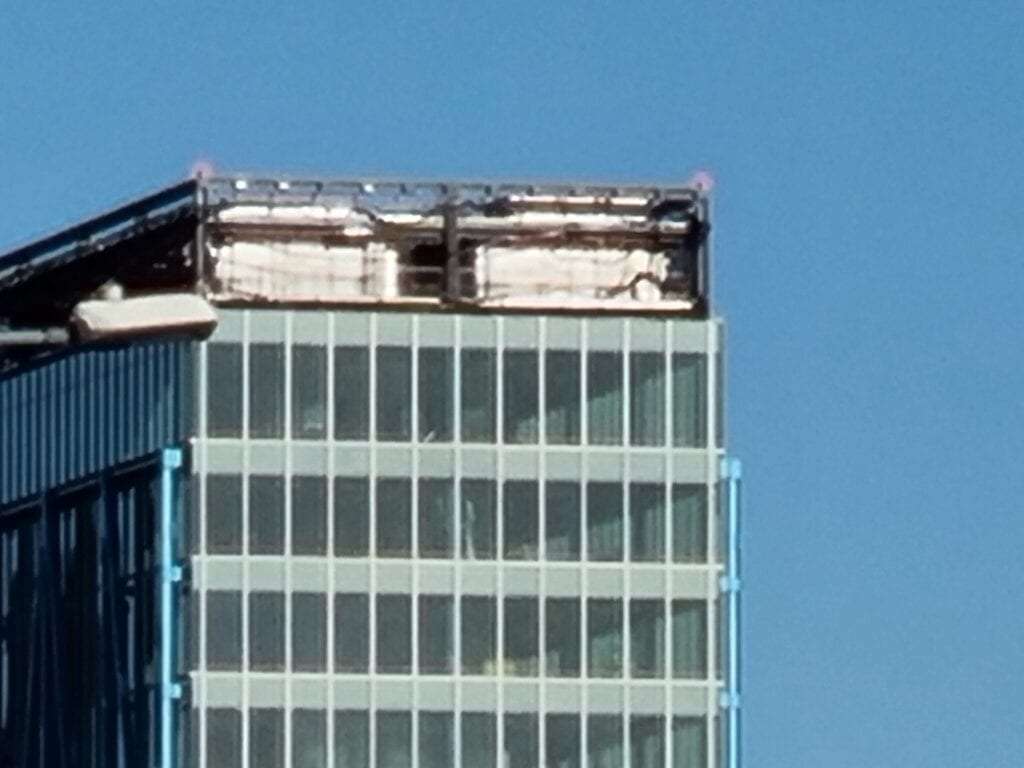 The 30x zoom is also pretty competent at grabbing a decent shot of the moon but, unfortunately, we suspect Samsung might be applying some filters to the end image to make the results a bit better than what the lens is capable of. 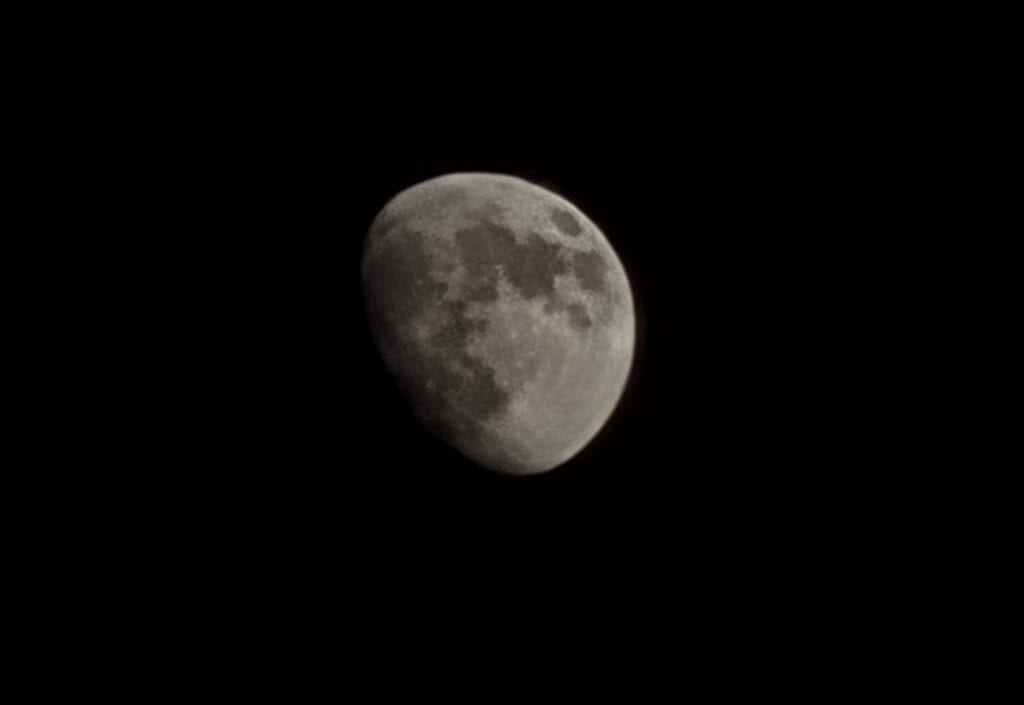 If you want to test the might of the 64MP telephoto sensor in all its glory, you can switch over to the ’64MP Mode’ which reduces a lot of the AI processing but gives you a lot more detail overall. This mode usually works best for bright, day time shots as the sensor doesn’t need to work on correcting any lowlight issues that only kicks in on the ‘normal’ 12MP sensor. Here is a sample of the kind of detail you can expect from this particular mode.

Playing with the new main sensor on the Samsung Galaxy S21 and, when taking full res images at the full 64MP, the level of detail is very impressive! 📸 🌻(the second image is a cropped-in version of the first) @SamsungIreland_ pic.twitter.com/MaFPS3BEkt

I like the images the Samsung Galaxy S21 takes. In the past, Samsung has been guilty of doing too much with its image processing, and the S21 does this a bit too. But not as much, and this new device is a step in the right direction. The S21 also really excels in low-light scenarios with the sensor allowing in much more light when using the dedicated Night mode. 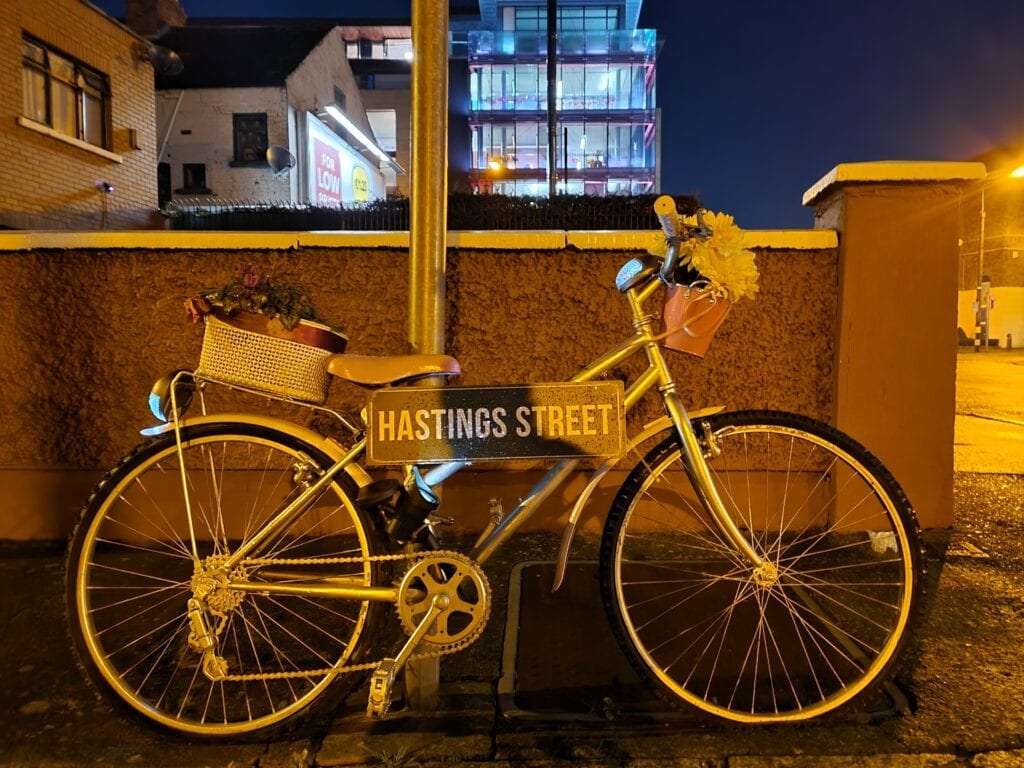 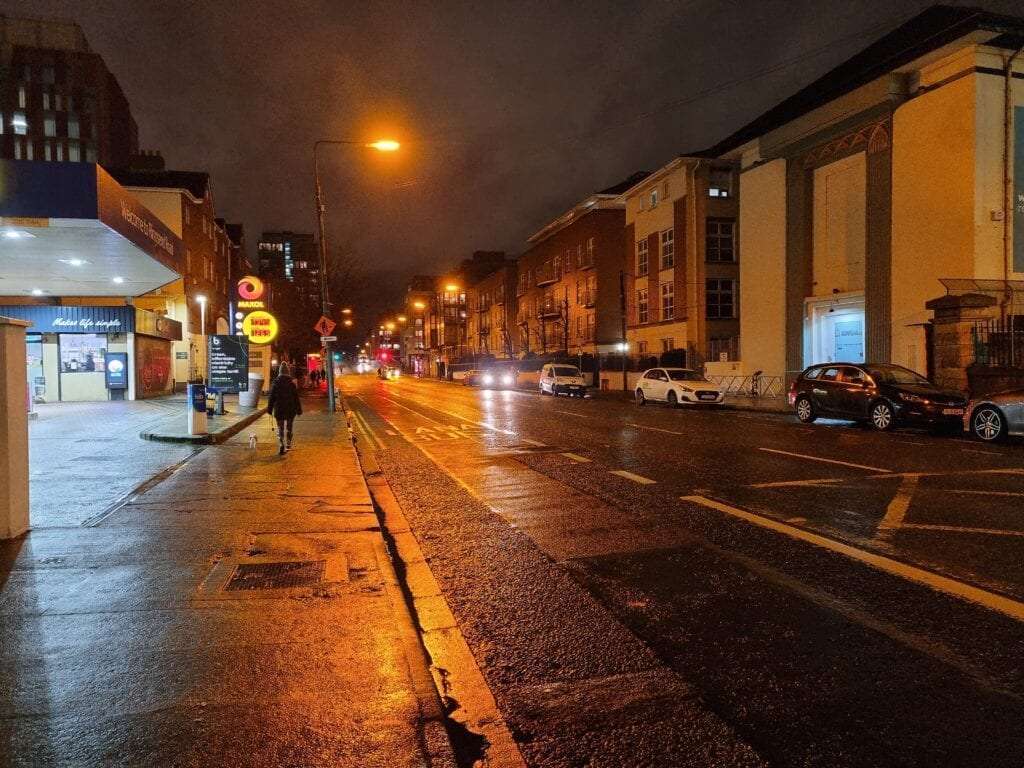 The Galaxy S21 is also capable of recording in 8K/24fps but be warned, 30 secs of video can take up to almost 1GB of space at a go! Something a bit more practical is that the ultra-wide and wide-angle sensors can record at 4K/60fps as well but, for some reason, I can’t get the telephoto lens to record at the same resolution. Maybe there’s an update on the way to enable it as I know all the lenses on the S21 Ultra can do 4K60 and it’s using the same Exynos chip.

All in all, I love the performance of Samsung Galaxy S21. The average point-and-shoot smartphone photographer is going to love it too.

The Samsung Galaxy S21 has a 4000 mAh battery on-board. And yep, you guessed it, this is the same as last year’s S20. That’s not the story here, though. The Exynos 2100 chipset is. Again. Usually, people are a bit miffed if their territory doesn’t get the full-fat Snapdragon processor as it means worse battery performance. This year, I suspect us Exynos-ers won’t be annoyed at all.

And while I can’t say the Exynos 2100 is more power-efficient than the Snapdragon 888 (because I don’t have both devices to test). I can say that I am impressed with the battery performance of the 2100. I’m a pretty heavy smartphone user. Constantly doom-scrolling on Twitter; taking pictures and videos of our dog, Pearl; reading news articles; listening to podcasts or Spotify; using Google Maps for Sat Nav when in the car whilst also streaming music via Bluetooth to the car’s speakers. So, if you can’t already tell, I use my phone quite a bit. And the biggest compliment I can give the S21 is that it handled everything I threw at it in a day on a single charge. Easily.

Finally, let’s end on a positive and an area where there is a clear upgrade. The S21 has a larger in-screen fingerprint sensor. This *upgrade* obviously means users are going to get a better success rate at unlocking your phone with your digits. It’s a welcome addition too, as facial recognition isn’t the most convenient way to unlock devices right now due to more of us having to wear masks in public. 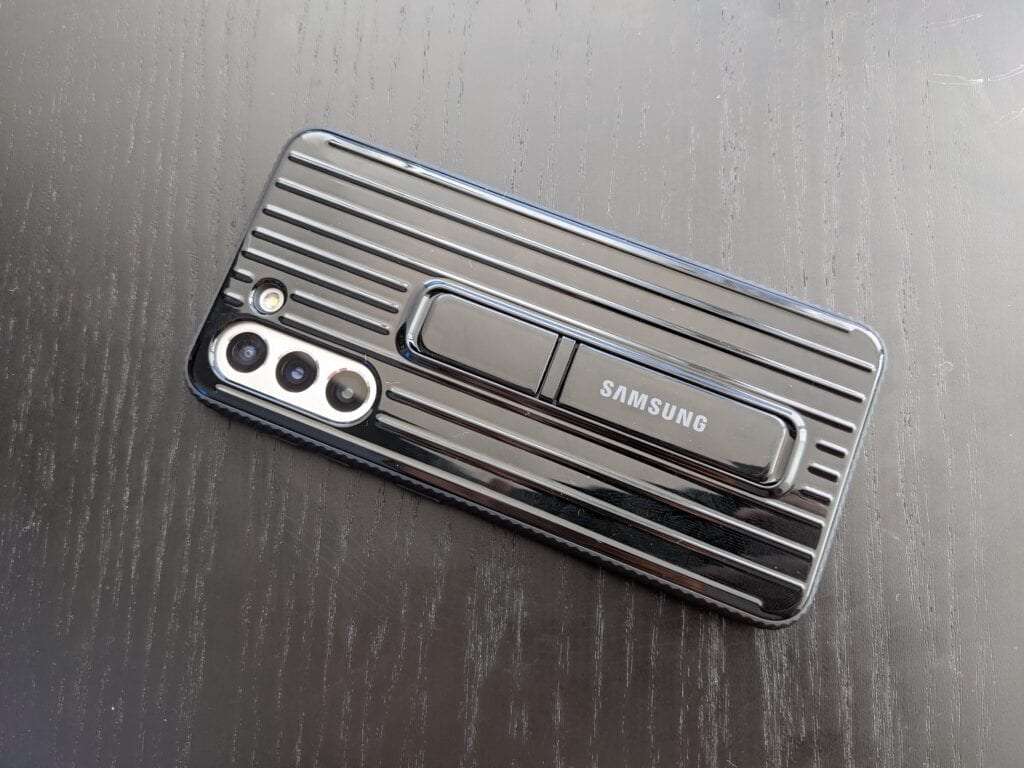 Samsung also sent a handy ‘Protective Standing Cover’ with our S21 review unit and not only did it feel pretty sturdy and capable of taking a few major drops, its two pop-out stands on the back were very handy for propping the phone up for watching video content or recording Selfie camera video (which can be recorded at 4K/60fps). 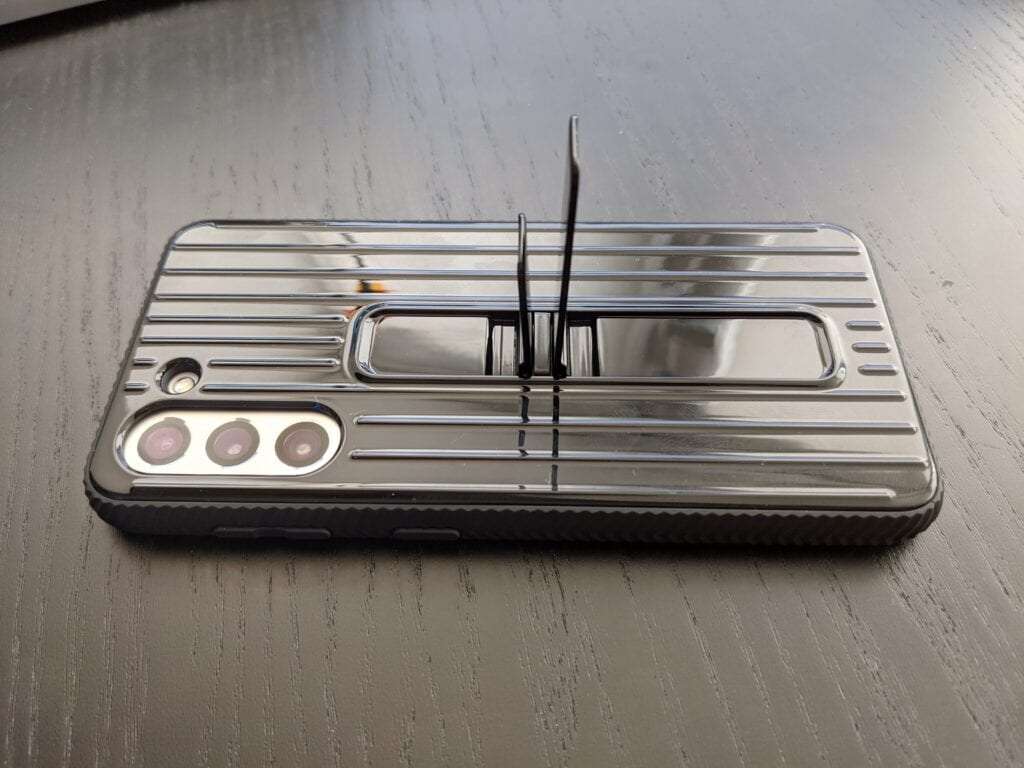 The Samsung Galaxy S21 is all about two things. A lower price and a better processor that makes a phone – that’s otherwise not very different from last year’s model – a bit better in all departments. The price drop is obviously a good thing too.

Starting on 29th January 2021, the Galaxy S2 will be available in Samsung channels and major Ireland retailers. It’s also going to be available in the following colours and storage sizes: Phantom Violet, Phantom Grey, Phantom Pink and Phantom White available in 128GB and 256GB models with 8GB RAM.

Pre-orders for the Galaxy S21 have already started and if you pre-order before the 28th January, you can claim a free pair of Galaxy Buds Live. The 128GB is priced at €879 whilst the 256GB will set you back €929. 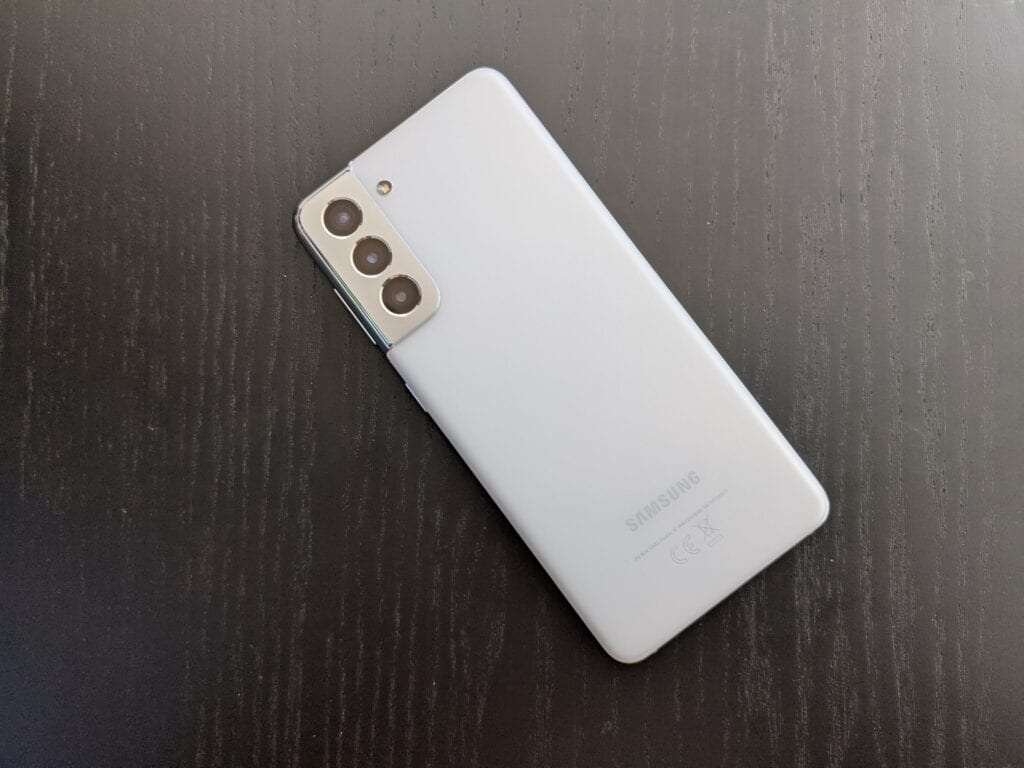