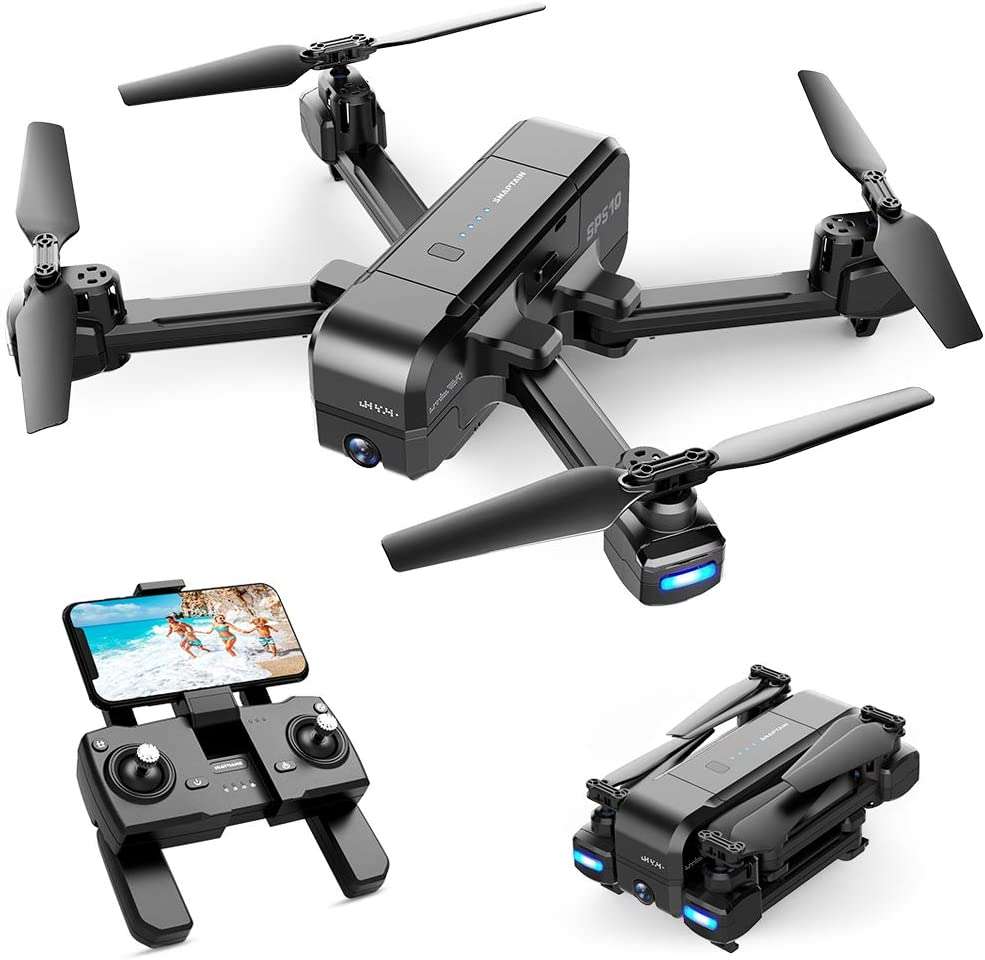 It’s 2021 and everyone wants a drone. I know I have always wanted one. I’m not sure why I NEED one, but needs and want and all that. The amount of drones available to suit every budget is crazy right now and, obviously, the feature set various depednign on price point. This is where the Snaptain SP510 comes in. Whie it’s a little more expensive than some of the cheaper models out there, coming in at under 200euro, but it does come with some advanced features and a good camera.

Like a lot of drones the SP510 s a foldable drone. I prefer foldable drones because they are easier to keep with you in your backpack or bag for those times where you might actually want to use it (e.g. out for a picnic, or nice walk along a scenic area) 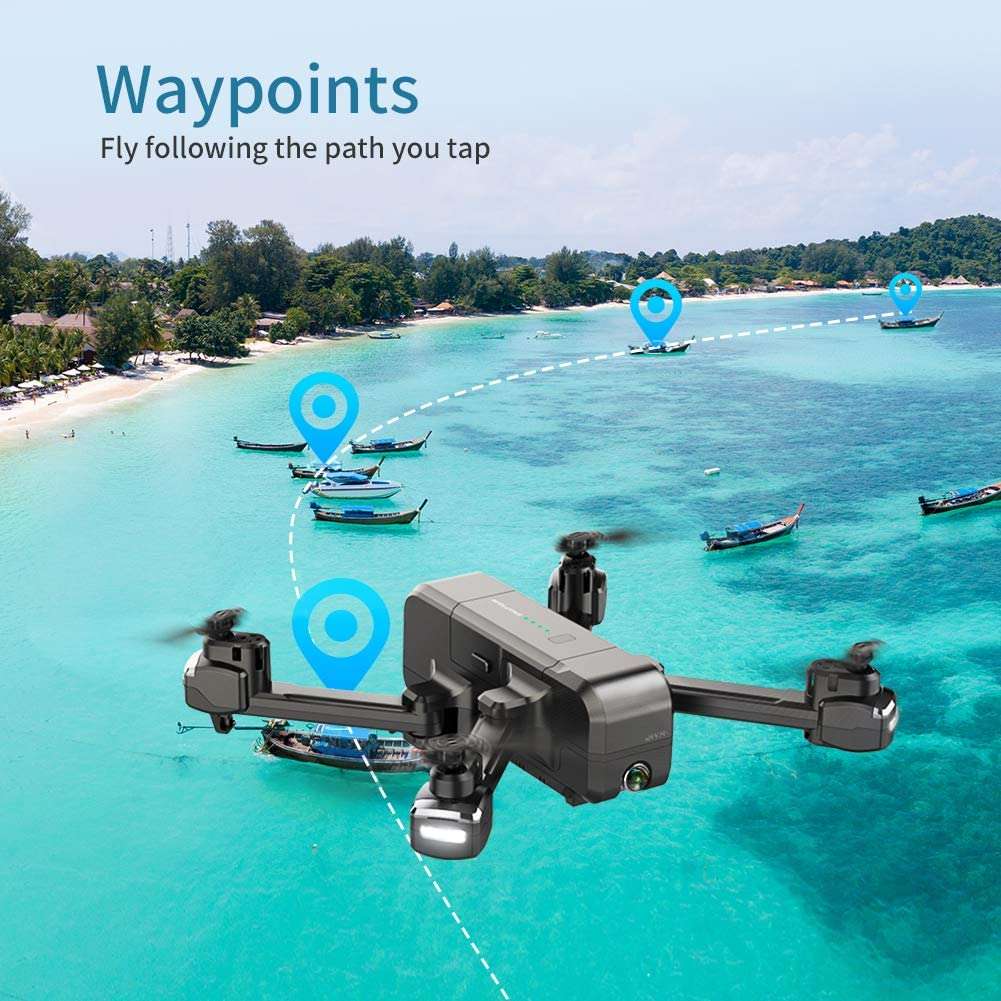 While the SP510 does fold, it is still a little bulky and kind of boxy when it’s all folded up. I do like its all-black colour scheme and it has a decent build qualit which you should expect from a drone that costs the guts of 200euro. It’s also worth noting that the SP510 weighs around 272g which means if you live in the USA, Canada or the UK, you will need to register the drone before you can fly it. Even if you’re only flying this for fun in our back garden / local Park, we would recommend you check out what the rules are wherever you live just to be on the safe side of the law. 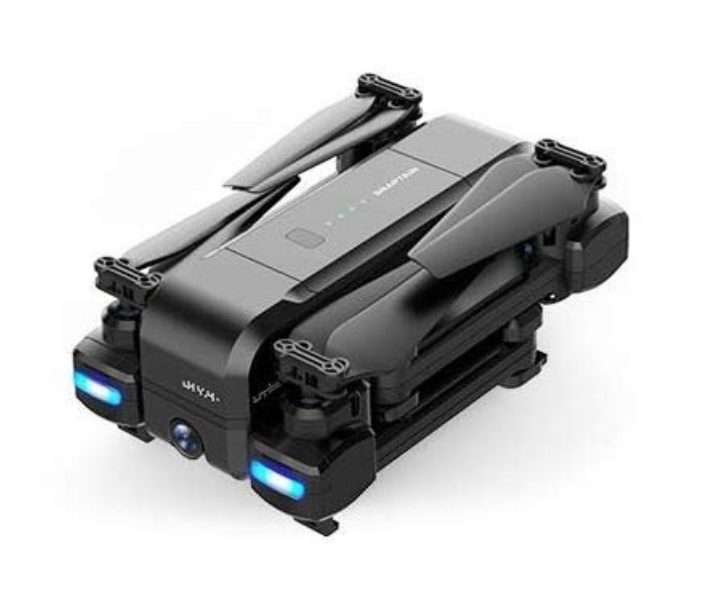 Like almost all drones, the Snaptain SP510 has some useful LED lights on the end of its rotor arms. These lights serve a couple of purposes, first, they look nice when you fly the drone at nighttime. Plus, they will also help to indicate when the drone compass has been fully calibrated.

The 2.7k camera is on the front of the drone and it is a fixed camera so there is no stabilization onboard, but you can adjust it on the 2 main axis (horizontal and vertical). It has a micro SD card slot on the bottom which is compatible with cards up to 128GB which will be more than enough to record your videos and images on. To get the full 2.7K quality of the camera, you will need to record the video footage on the card, otherwise, the video quality is 1080p if you record it on your phone. 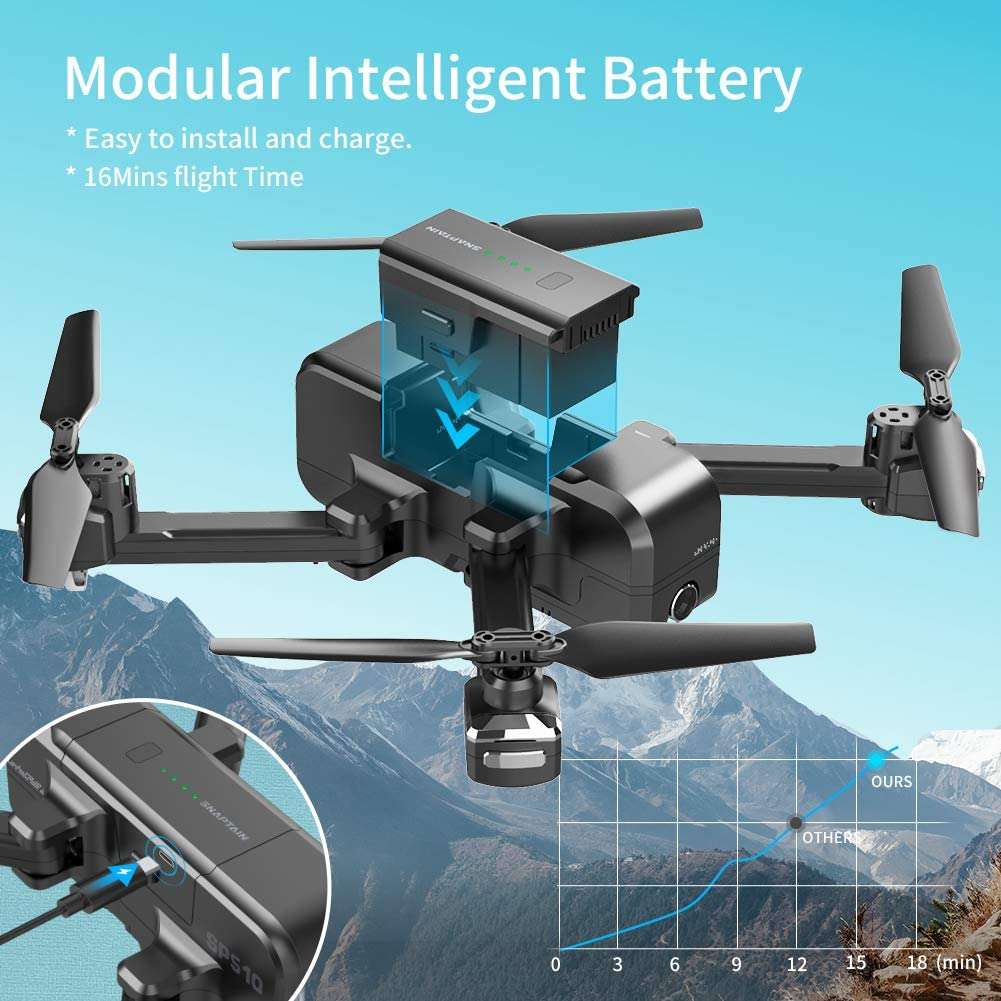 The drone is powered by a 1500 mAh battery which goes on top of the drone like a backpack of sorts and has LED lights that indicates it power level. The battery provides the drone with a flight time of around 14-16 minutes depending on how you fly it.

Also, you only get one battery which is a shame, so if you want to extend the flight time, you will need to purchase an extra battery. I tried to source an additional battery and was unable to find one, but I suspect this is down to pandemic issues at present. The battery takes over 2 hours to fully recharge, so it is best to purchase one extra battery because you really don’t want to wait around a couple of hours only to fly the drone for only 16 minutes.

One of the best aspects of this drone is its controller it comes with. It’s quiet small and has a pair of handles that pull out from the bottom and a phone holder that pulls out from the middle. There is a dial on the top that will allow you to adjust the camera. It also has an internal battery so no need for any battery purchases for the controller. 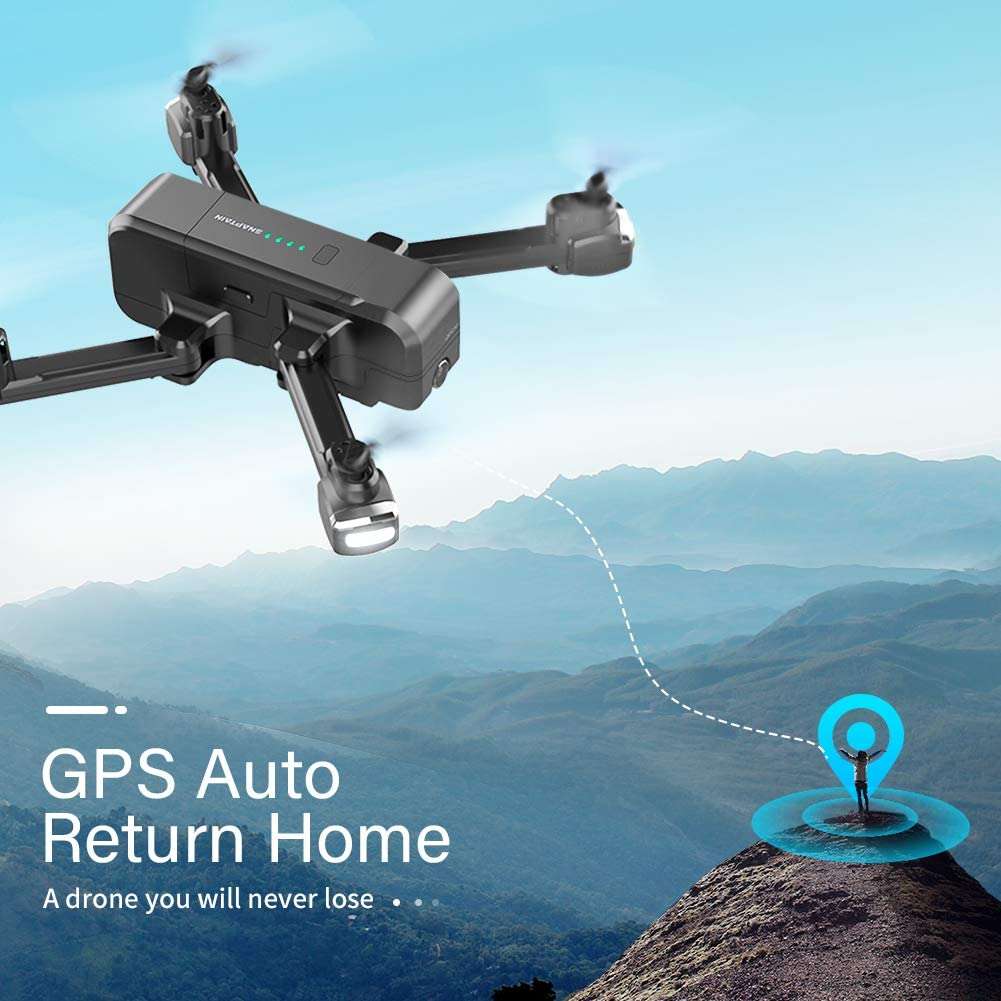 If you want to be able to use your phone to fly the drone and see the camera you’ll need to download the Snaptain app and pair it up. It was pretty quick, but I found I had to remove the case from my phone to get it to stay in the case and I found the phone clip, the clip was positioned right where my power button is, so I had it kind of lopsided. But it worked. It did get very hot while using it, but that’s to be expected when using your phone to wirelessly communicated, stream video and store anything captured while flying (it’s sort of ok that you’re limited to about 16 mins flight time)

The camera on the Snaptain SP510 is better than standard 720p/1080p found on cheaper drones. It is a 2.7K wide-angle camera that can record some good video footage.

This is not, nor should it be considered a professional camera drone as the camera, while high res, does not have any kind of advanced stabilisation features, so the footage might not be the smoothest or the most stable. Best to fly when it’s calm out there. 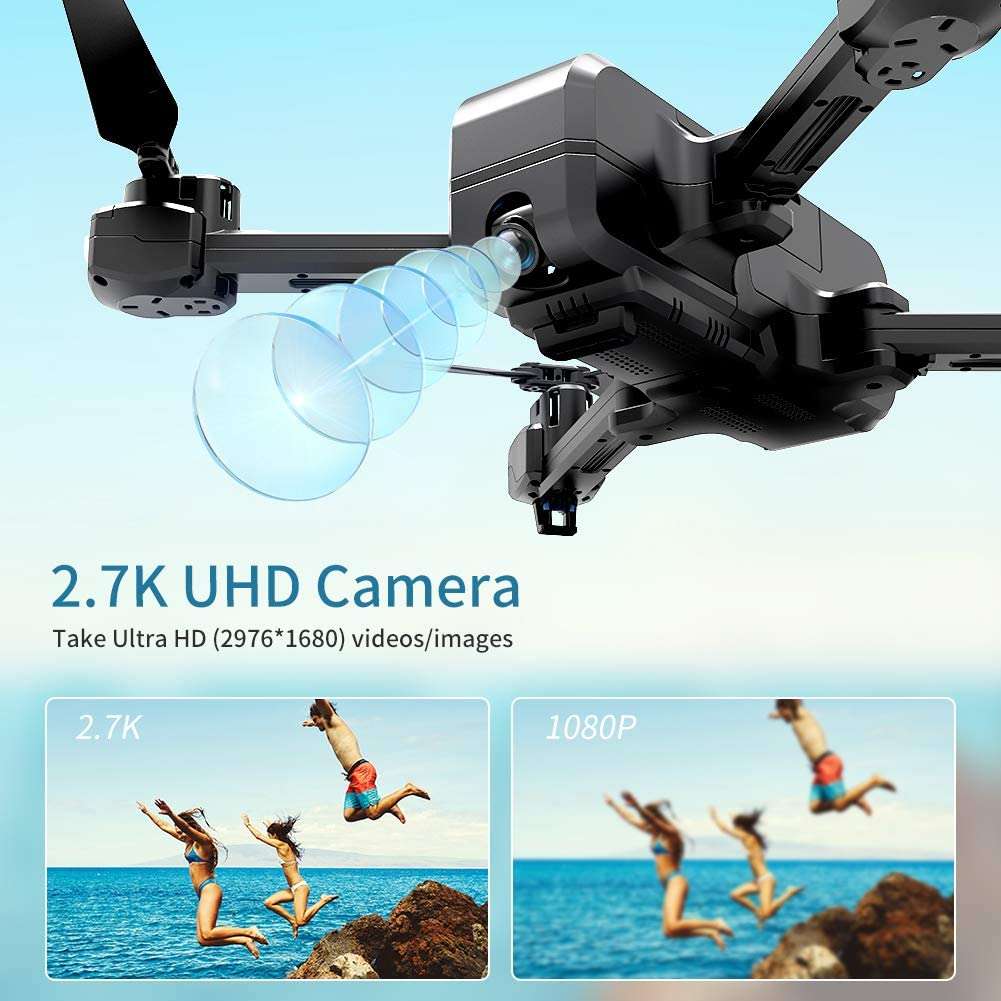 The live streaming quality is pretty decent, at 720p, its fine, and I know why they have done it and it helps with the speed of the video and transmission range (which is around 300 meters). Overall, it’s an okay camera that will get some ok video and photos out of.

The Snaptain SP510 also comes with a few advanced features which include the following;
GPS – Allows you to track the drone on the app and fly the drone more safely. The GPS module also allows the drone to have a few smart flight modes that are fun to operate.

Follow Me – In this mode, the drone locks on to your smartphone and follow you wherever you go.
Orbit – Similar to the follow me mode, in Orbit mode that drone will circle you from height and distance you set within the app.
Waypoint – Allows you to draw a flight path on the app and the drone automatically flies along that path and comes back home.
Automatic Return Home – This feature can be manually activated by pressing the return home button on the controller or app. It activates automatically if you lose connection with the drone or the battery gets low on charge. A cool feature that will minimise the risk of losing the drone.

I have never flown a drone before the SP510 and I have to say it was pretty easy to get up and running and feel confident. The drone flies very well, I always wanted a drone that can keep its altitude when in hover mode and is easy to control. It has three-speed modes and is quite fast, so if you are a beginner, I would advise you to fly in its default speed.

This is a good drone, not a great one, but good enough for most people. The 2.7K camera will some decent videos and images. I wish the flight time was a bit more and also wish they included an extra battery. Overall, If you are interested in getting started with a drone, it’s a good model to start out with, but do look around as there are others out there that are better and don’t cost much more.

You can find out more about the Snaptain SP510 here: https://snaptain.com/products/snaptain-sp510