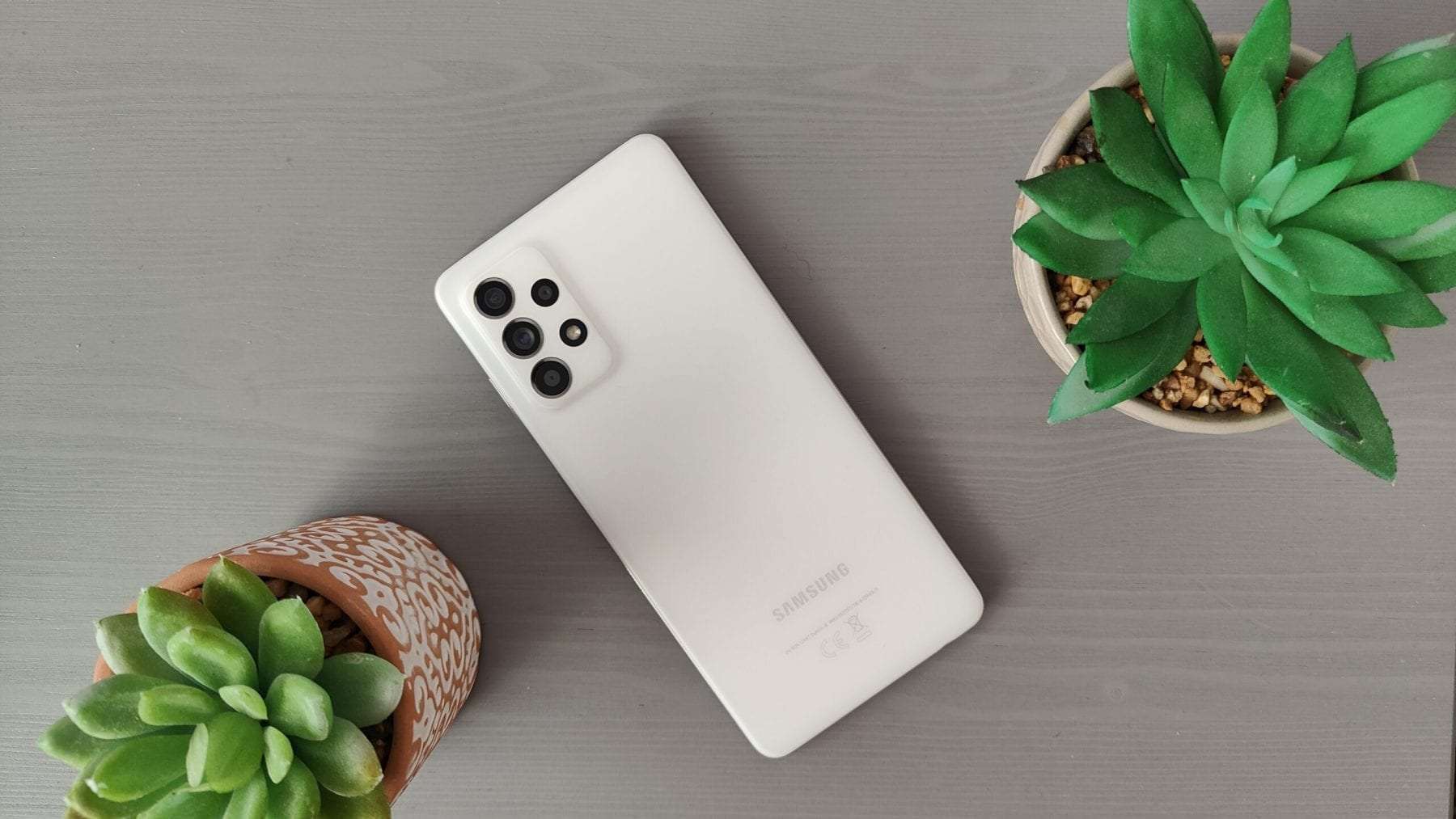 Samsung made some serious enhancement to its mid-range Galaxy A-series in recent years. While previous A-series models used to be bulky and sluggish, the South Korean tech giant has upped the game to compete with the arch-rivals. Carrying forward the tradition, the new Samsung Galaxy A52 5G shines bright among its siblings with its revamped design (specifically the back cover), a high-refresh-rate display, and 64MP quad-camera with OIS.

Samsung has made a major overhaul on the Galaxy A52 design aesthetics this time. The phone has a solid build quality. Although the phone is built out of plastic, thankfully Samsung didn’t opt for ‘glasstic.’ Unfortunately but to be expected at this price point, the handset doesn’t feel premium, but the phone offers good ergonomics and feels durable. While the front appears similar to any mid-range phone you will find in the market (the punch-hole display), the rear panel recites a different story altogether. The white model we reviewed has an understated look but the camera set up gives the appearance of a more premium phone. Thankfully, due to the plastic rear, fingerprints aren’t an issue with the device either, which some of you may be happy to hear. 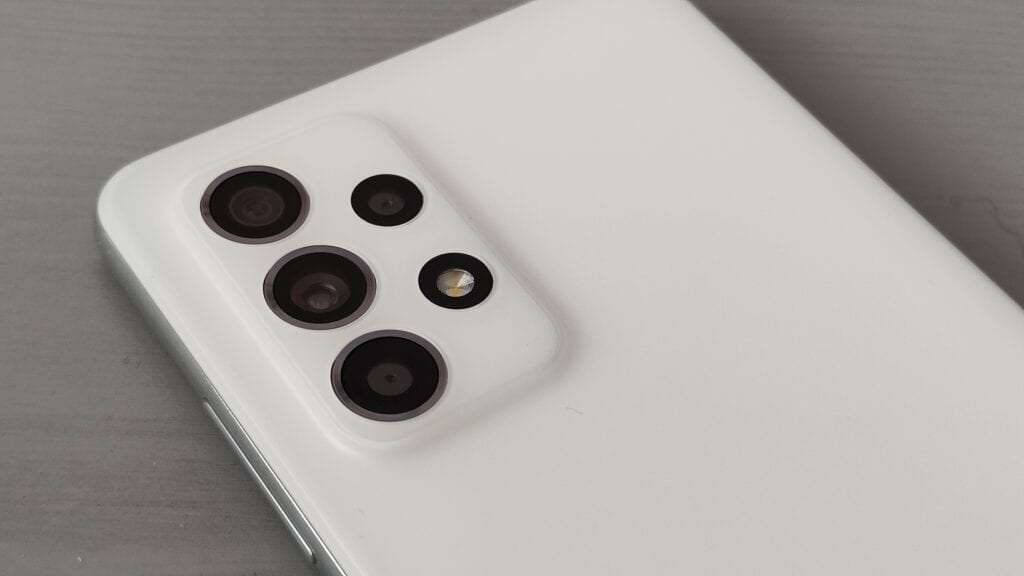 The volume keys and the power button sit on the right edge while the left side of the frame is undisturbed. At the top, you will find the hybrid tray, while the bottom gets all the necessary ports and a mono-speaker. 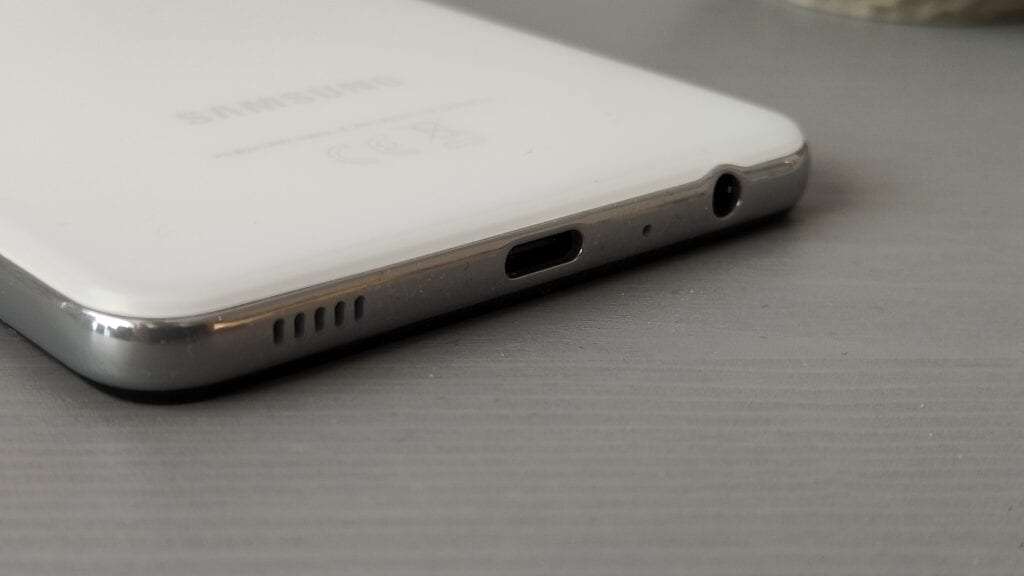 The audio quality is decent, and the earpiece doubles up as the second audio channel.  It did sound a bit pitchy out of the box, but with Dolby Atmos turned on it could deliver pretty decent surround sound. Another good thing about the Galaxy A52 is that you get an IP67 ingress protection rating which isn’t that easy to find in the mid-range segment.

As with any Samsung mid-range phone, the Galaxy A52 gets a vivid AMOLED panel. The phone features a wide 6.5-inch FHD+ Infinity-O Super AMOLED screen with an impressive 120Hz refresh rate. The screen is layered with Corning Gorilla Glass 5 for added protection. The 120Hz refresh rate offers a fluid experience when scrolling through the interface or while playing games.

Binging content on the vibrant display was an enjoyable experience. The software includes two colour profiles for the display: Vivid and Natural, with the former rendering vibrant colours, while the latter shifting to true-to-life colours with a cool tint. 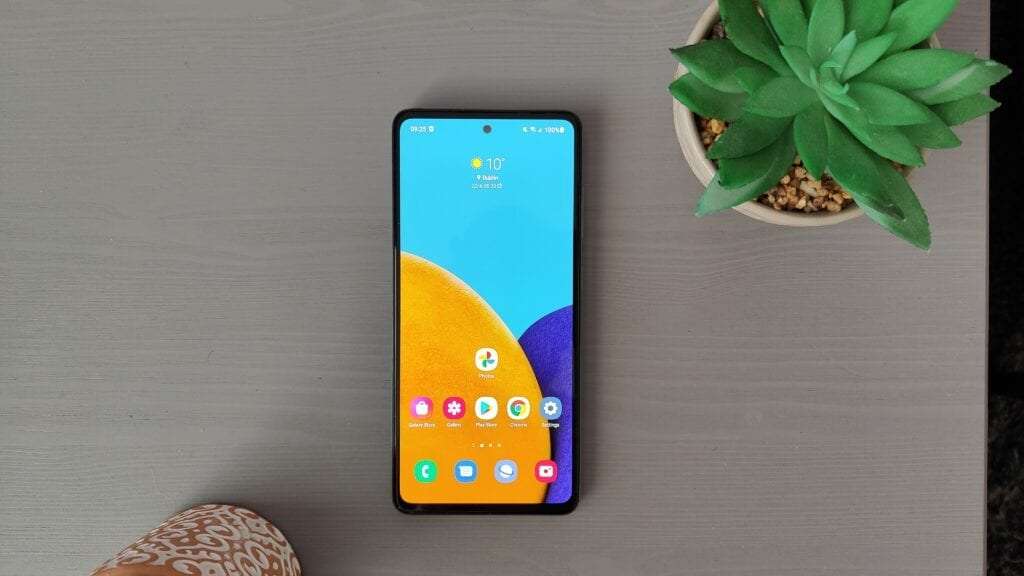 There is Eye Comfort Shield which is basically Blue Light Filter that reduces eye strain by limiting blue light emission from the screen. You get an adaptive setting as well that automatically adjusts the screen’s colours throughout the day. Alternately, you can use the Custom setting and schedule the time. That said, the display on the Galaxy A52 is significantly bright, meaning, you won’t have any difficulty reading content or watching videos under direct sunlight. The phone also has an optical in-display fingerprint reader which is quick, accurate and unlocks the device in less than a second.

The Galaxy A52 runs custom One UI 3.1 based Android 11 OS. While the previous-gen proprietary OS (TouchWiz) wasn’t that good enough even for moderate users, Samsung has stepped up the game and brought a coherent version of Android. The OneUI is a feature-rich user interface that brings in handy customization and a host of enhancements. On top of that Samsung has committed to providing a minimum of three years of software upgrade and four years of security updates for the Galaxy A52.

As far as performance goes, the Snapdragon 720G chipset onboard is capable enough to drive multi-tasks. In terms of gaming, the phone could run graphics-intensive Call of Duty: Mobile, Infinity Ops without any lag, although I would recommend users to try these games in medium graphics settings for an enhanced experience.

Samsung Galaxy A52 has a surprisingly capable quad-camera system. The phone has a 64-megapixel primary camera that is assisted by optical image stabilization (OIS). The sensor takes 16-megapixel photos by default. There is a 12-megapixel ultra-wide sensor which is accompanied by a 5-megapixel macro camera and a depth sensor. Speaking of the camera performance, the OIS does a decent job with low-light shots and reduces blurriness to an extent with moderate shaking. The camera software bags the usual Samsung features with Scene optimizer toggle in the corner, shutter button at the centre and mode carousel on the right side.

You can create AR Doodle and take short clips with the Single Take feature. Samsung has added a Fun mode as well that basically brings Snapchat filters in the native camera app (pretty much Gen-Z bits and bobs).

There is a Pro mode as well for those users who prefer testing the camera’s core functions individually (ISO, shutter speed, focus). There is a Standard option under Pro mode that allows adjusting contrast, highlights, shadows, and tint. While the functionality isn’t that aggressive, these nifty features come in handy while capturing photos in varied lighting conditions.

Coming to daylight performance, the cameras on the Galaxy A52 manages to retain plenty of details with vibrant colours and a wide dynamic range. While the primary sensor captures photos at 16MP by default, the UI offers the option to switch to 64MP. That said, switching to the 64MP mode did yield some impressive results in the daytime. 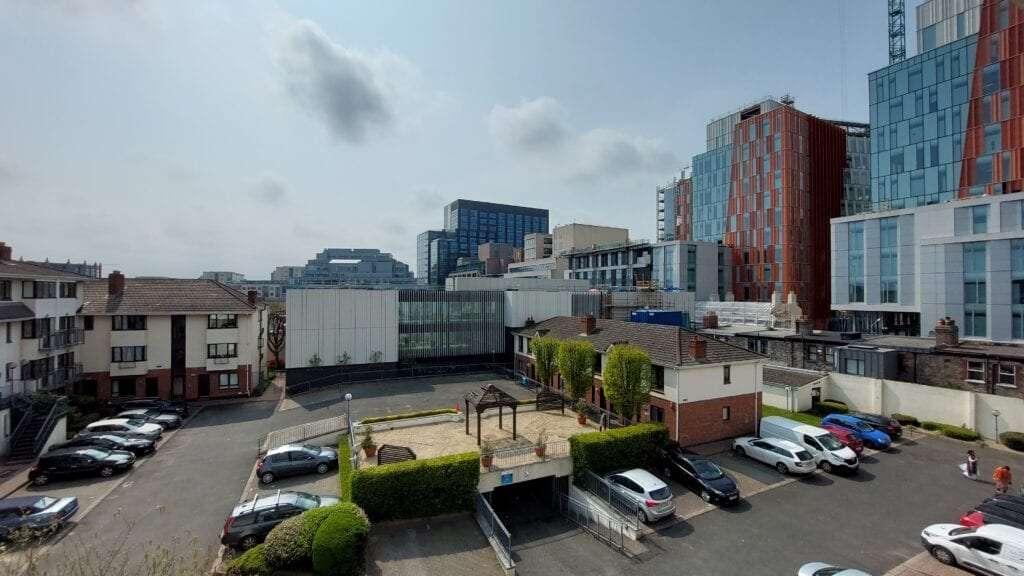 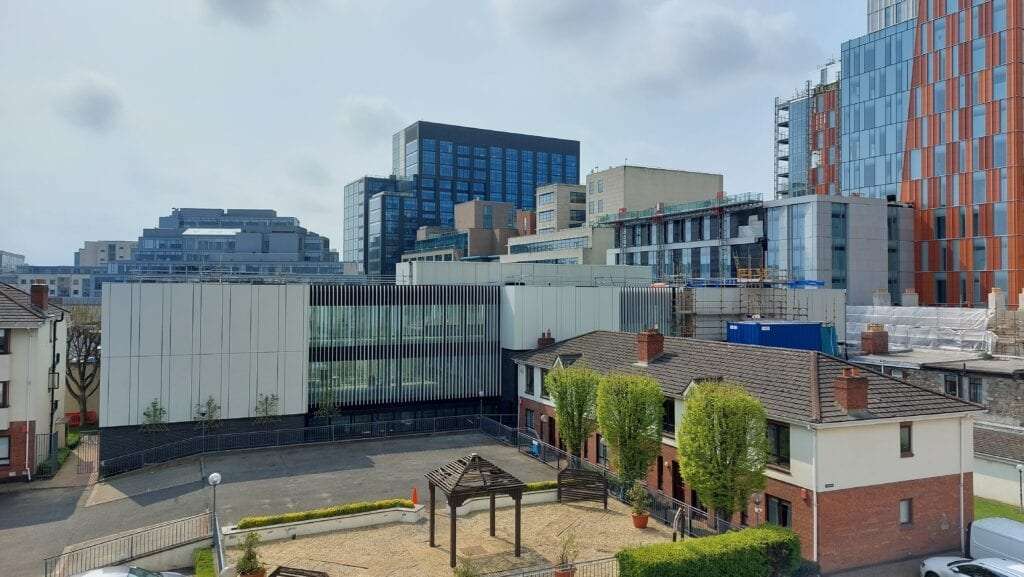 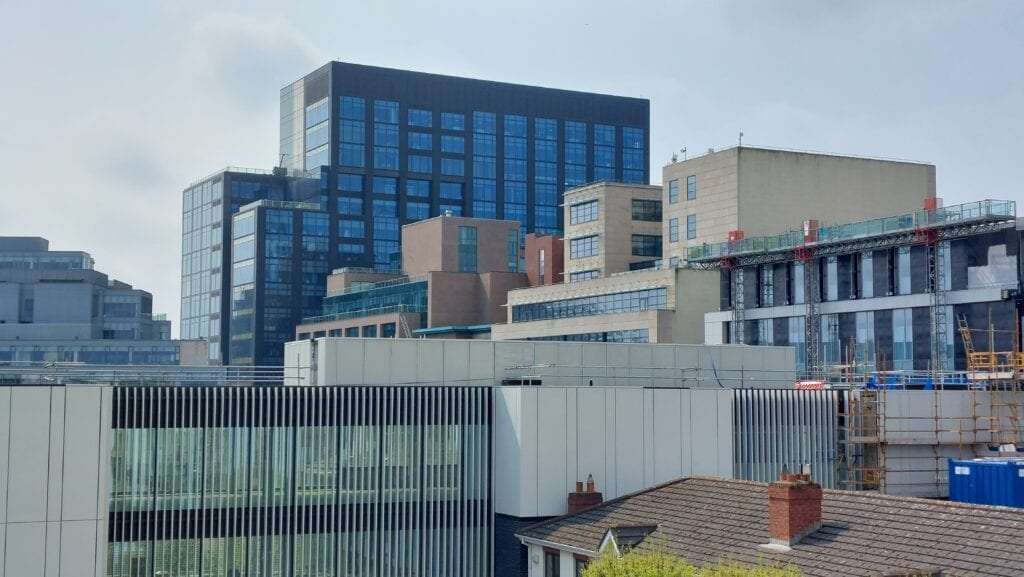 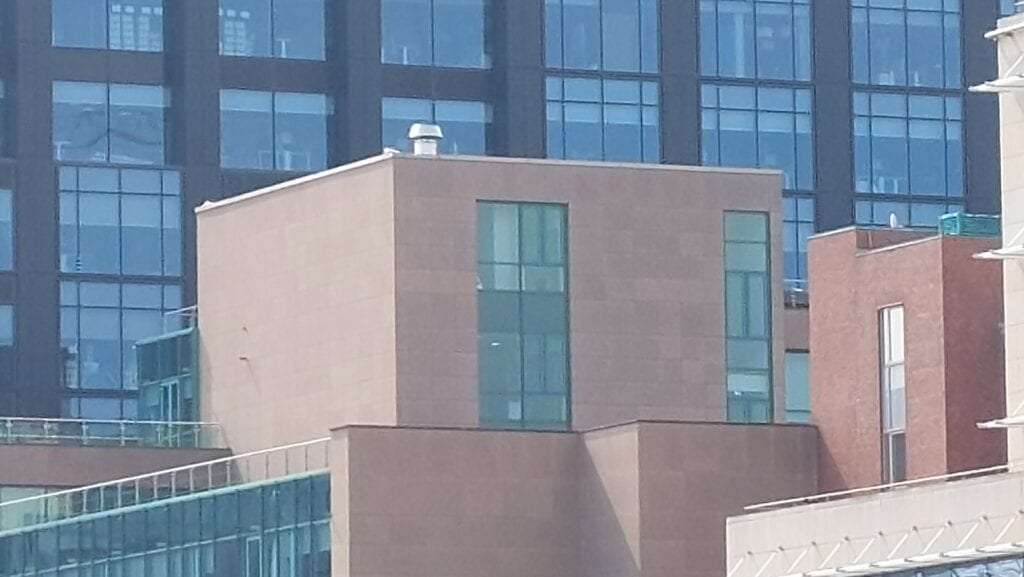 It manages to fill in extra details to the shots with decent sharpness around the edges. The ultra-wide sensor tends to soften the images but manages to render good colour reproduction. There is Portrait mode and Macro mode as well which you can access under the More section. 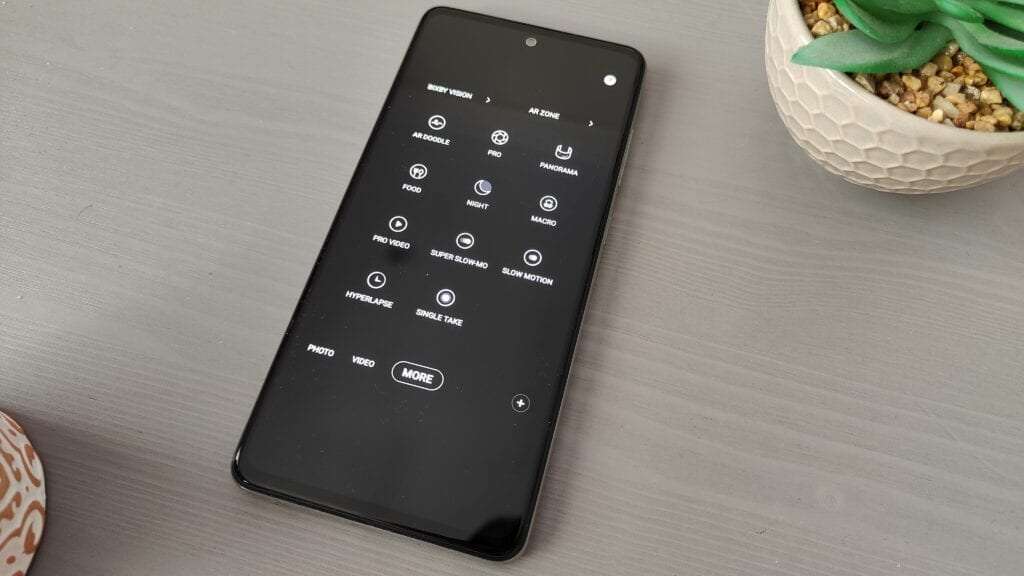 On the front, you have a 32-megapixel selfie camera. The Quad-Bayer sensor shoots selfies in a default 8MP mode.  The UI offers a single and a wide mode. The front camera does a respectable job be it in daylight or low-lighting condition. The cameras retain a good amount of detail and you get the scene optimizer for selfies as well. 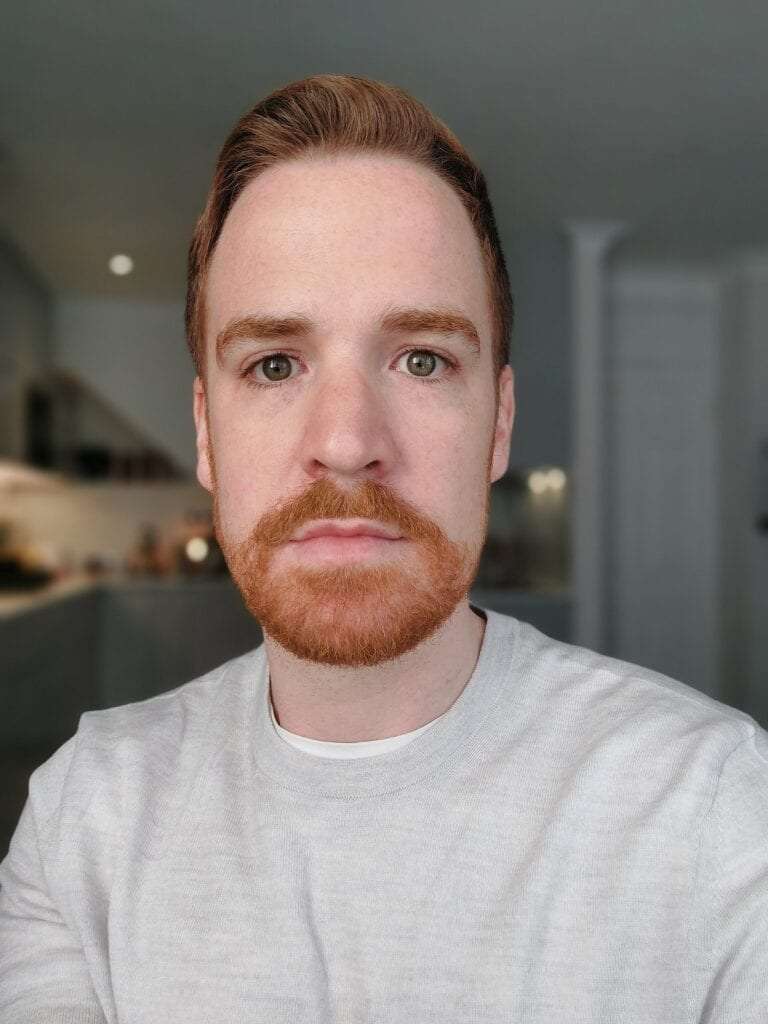 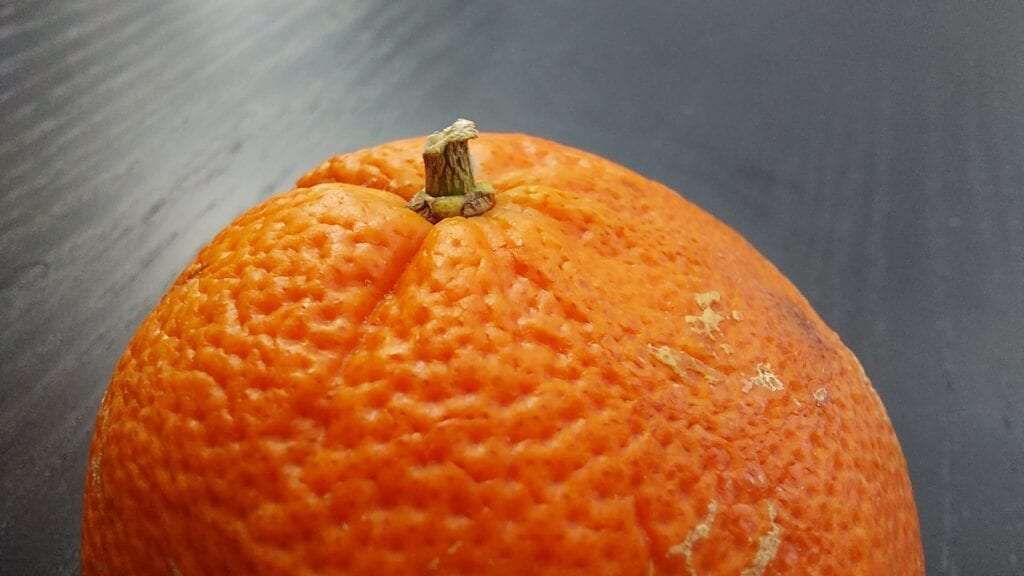 The UI has a Night mode integrated into its main camera options also, but even without the mode, the cameras produce shots with a good amount of exposure. The Night mode no doubt improves colour accuracy, but quick snaps won’t turn out that bad as it happens in most mid-range phones.

Unlike previous Galaxy A-series models that used to ship with mammoth-sized battery, the Galaxy A52 packs a decent 4,500mAh battery. During my usage, I could get a day’s worth of general use, which included some Netflix streaming, replying to emails, calling colleagues, playing games in between, and capturing photos throughout the day. The Galaxy A52 support 25W fast charging technology, however, it bundles a 15W charger in the retail box. With the dedicated charger, the phone takes nearly 1 hour and 34 minutes to charge from 0-100% so unfortunately not as fast as we would like.

Samsung’s Galaxy A-series have come a long way. The Galaxy A52 5G flaunts an eye-catching back cover with a satin finish which is mostly aimed for younger generations who aren’t as pushed about the looks of their phones. Besides the appealing design, the vibrant AMOLED panel, and rear cameras (OIS on the primary sensor) are two strong points of the new Galaxy A-series phone. The clean UI and the capable Snapdragon 720G also bring an improved user experience overall to the device.

You can learn more about the Samsung Galaxy A52 5G here. 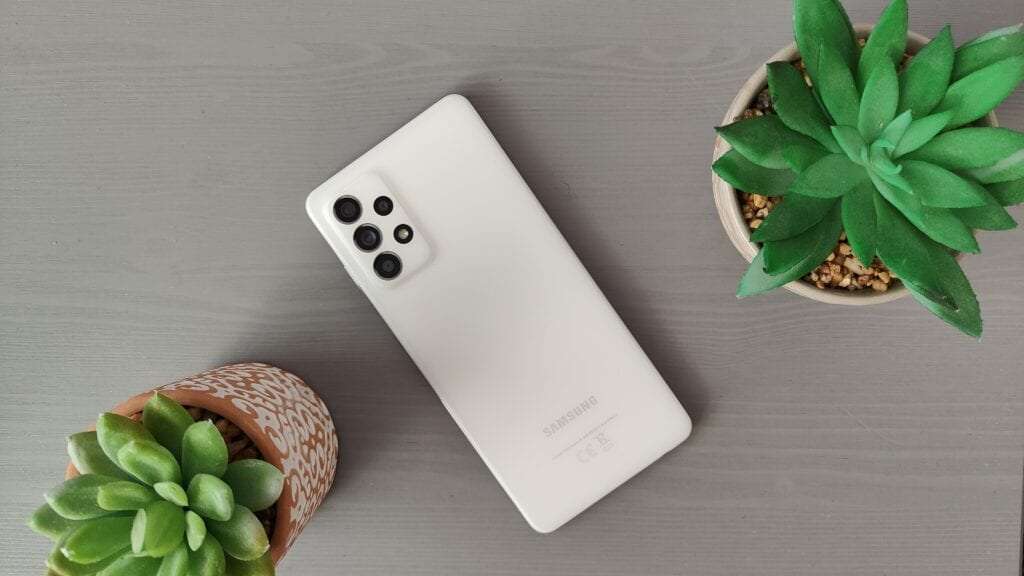 To promote the launch of the new Galaxy Z Flip3 and Galaxy Z Fold3 devices, Samsung Ireland has designed and…

Last night was Apple’s Autumn event where we got a whole bunch of brand new updates to Apple’s iOS devices.…

If you're someone who uses your phone whilst working in construction or for on-the-bike navigation, but you’re worried about how…