Following on from 2013’s ‘Into the Nexus’, The story begins when Dr. Nefarious steals the Dimensionator and tries to use it to find a dimension where he always wins. Amidst all the commotion of Ratchet and Clanks efforts to keep the weapon out of his hands, he subsequently accidentally damages the fabric of space and time. After traveling through several dimensional rifts, Clank eventually arrives in a dimension where he meets Rivet, who refers to know Dr. Nefarious as ‘Emperor Nefarious’.

Rivet and Clank must then reunite with Ratchet and figure out Nefarious’ plans whilst taking on whatever challenges he puts in the way. With a number of twist and turns  and the introduction and return of new and old characters alike, Rift Apart is an intergalactic, and interdimensional escapade, as you try to return everything back to normal and take down ‘Emperor Nefarious’ at the same time. 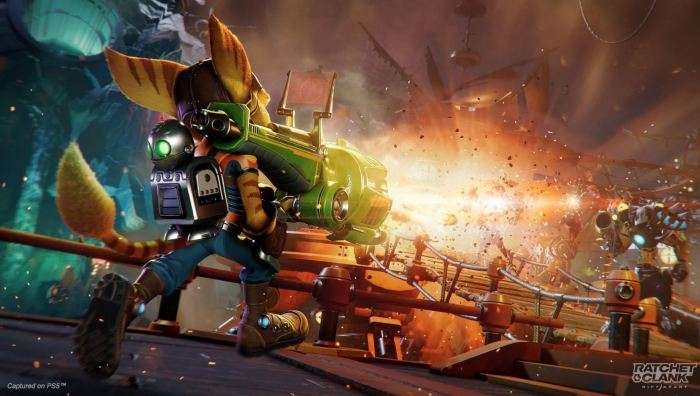 While there may be one two many times you find yourself hopping from planet to planet to continue the story, it does result in a fantastic excuse to experience new locations and characters, which are all fantastically well realised with their own unique flair and traits.

Overall, it took us about 25 hours or so to get through the main storyline whilst also completing a handful of side quests on a number of the game’s planets. The famous ‘Gold Bolts’ make a return with 25 of them scattered throughout the dimensions which, if you aim to find them all, would add to the overall playtime, on top of the other hidden discoverables Insomniac have included that we’ll let you ‘discover’ for yourself. 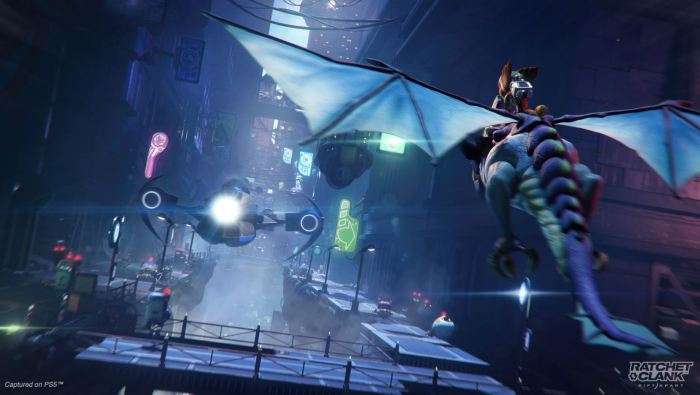 In terms of gameplay, unsurprisingly, this is a true Ratchet & Clank game at heart and Insomniac haven’t tried to reinvent the wheel, more a case of evolving what was there and adding a number of new gameplay experiences and sequences. For example, there are new ‘mini’ challenges where you take control of a micro spider-bot called ‘Glitch’ as she aids Ratchet in fighting viruses in computer programming for locks and other systems. You also have a ‘horde’ mode style section in the Battleplex arena where you must defeat waves of enemies of increasing difficulty and numbers including various handicaps such as the ability to only use one particular weapon for one of the challenges for example. 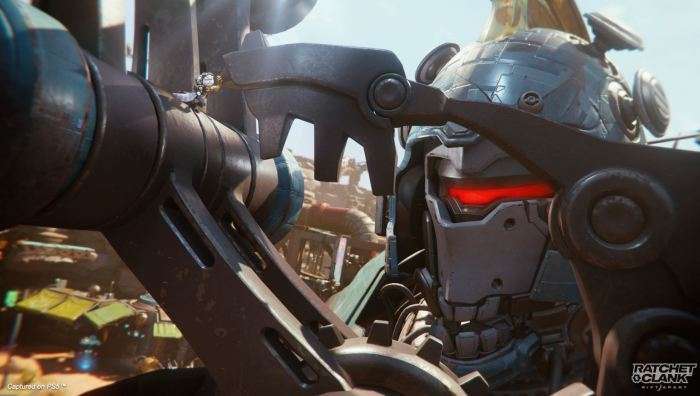 Rivet mid-fight in Ratchet & Clank: Rift Apart
Rivet, the female Lombax who we’ve been introduced to in a number of reveal and gameplay trailers now, is an interesting addition to the team with her own style and wit but, don’t worry, Clank fans will also get to control him as you jump into your own warped dimension and try to fix the many various ‘dimensional anomalies’.

The puzzles in these particular sections have an almost ‘Lemmings’ or ‘Oddworld’ feel to them as you must work out ways to save various ‘possibilities’ of yourself doing a task but only the real Clank can interact with the environment to change its layout so as to ensure safe passage for the other multidimensional Clanks.

Weapon upgrades are now available at Mrs. Zurkon, who has set up her own ‘upgrades shop’ throughout the various planets in the game. Using the bolts you’ve collected, you can pick up new incredibly quirky and franchise-fitting weapons of increasing randomness along with the ability to upgrade each of these weapons with the ‘raritanium’ found throughout the levels. 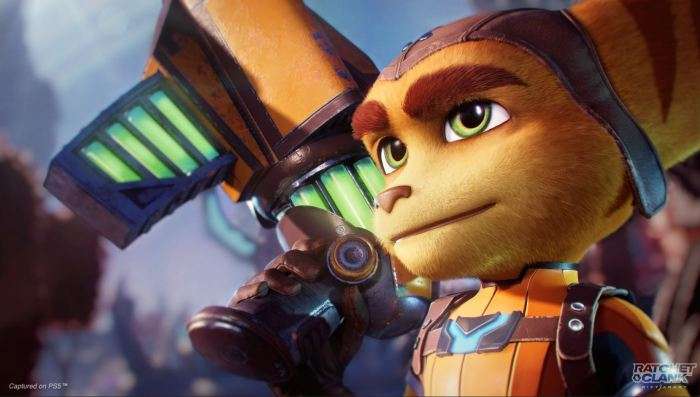 Ratchet in Ratchet & Clank: Rift Apart
Like previous instalments in the franchise, you’ll find yourself hopping between planets as the story progresses but, with the power of the super fast SSD in the PS5, its not only in intermission cutscenes where this planet hopping occurs.

Now, due to the collapsing dimensions, you’ll continuously find yourself falling and flying between worlds near instantaneously whilst battling foes, which is all done to spectacular effect while also keeping you in the heat of the moment.

You’ll also venture into pocket dimensions to find additional loot and armour upgrades. This type of fast paced ‘interplanetary jumping’ simply wouldn’t have been possible on older generation hardware with their disc-based hard drives and it’s really exciting to see Insomniac already utilising this ‘game-changing’ capability so early on in the console’s life. Even booting the game up from a cold start, we were back in the heat of the action in less than 15 seconds. 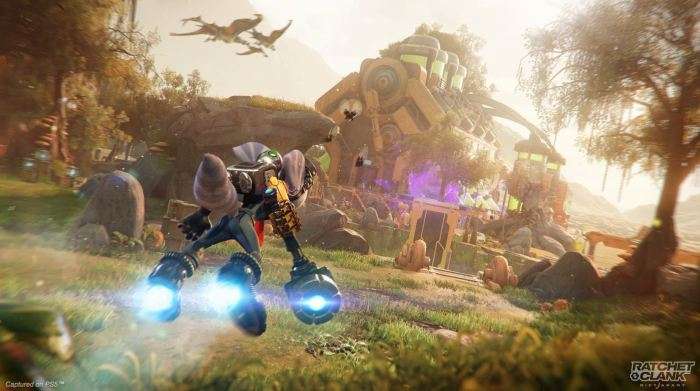 Rivet gliding around a lush jungle-like planet in Ratchet & Clank: Rift Apart
As polished as the overall experience was though, there were a handful of bugs that we spotted during our playthrough and, funnily enough, it was actually to do with the bugs in the game, be it the little fire bugs or crab like creatures getting stuck in a random part of the environment. So, when you think you’ve taken care of all the enemies, the mission won’t progress until you realise there’s still one stuck somewhere that you’ve to hunt down and take care of before moving forward with the story, hopefully this is something Insomniac can iron out in a future update and it may even be sorted with the day 1 patch.

If you’ve watched any of the cinematic or gameplay trailers for this title, you’ll already know just how stunning the visuals are. As we stated in our title for this review, Ratchet & Clank truly feels like a ‘playable Pixar’ film with its astounding attention to detail, real time ray tracing implementation and incredible lighting and particle effects for each and every level. 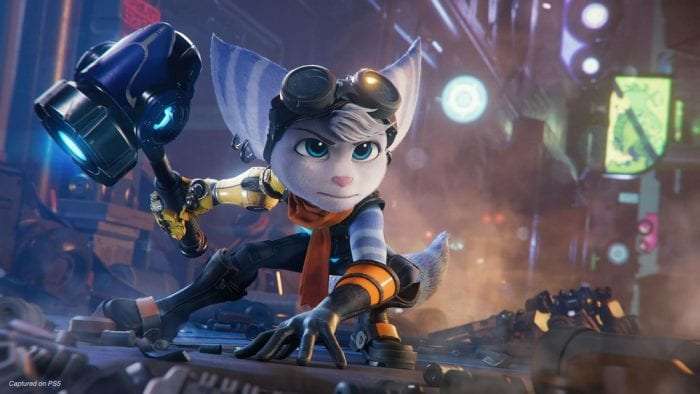 Rivet jumping into battle in Ratchet & Clank: Rift Apart
The photo mode is also one of the most robust we’ve seen in a game, which is unsurprising given how much control Insomniac game players for their Spider-Man Remastered and Miles Morales photo modes.

For our playthrough, we only had access to the ‘Fidelity Mode’ which enabled all of the raytracing effects and other visual flourishes such as improved lighting and additional FX but locked the frame rate to 30FPS. Insomniac Games has recently announced that there will be a 60FPS and 60FPS RT mode, much like the one released for Spider-Man: Miles Morales on PS5, available for the game on launch day, which is great for gamers that prefer frames per second over visual fidelity.

Insomniac’s use of 3D audio, powered by the PS5’s Tempest engine, is also extremely well implemented and a perfect showcase title with the ability to hear and pick out flying ships and falling nuts and bolts all around you, when using a headset.

One area where Insomniac has created a true ‘next-gen’ experience is its DualSense implementation. With its adaptive triggers, haptic feedback and improved speaker quality, the DualSense adds a whole other level of immersion when playing through Ratchet & Clank: Rift Apart. Guns have a varying range of functionality, depending how hard you pull the right trigger, with half way presses resulting in better accuracy for certain weapons or, causing you to fire a more direct single shot with a full press causing a more ‘scatter gun’ effect, like a shotgun going off.

The built-in speaker is also utilised for smaller in-game sounds, such as picking up bolts after taking down an enemy, all of which, again, adds to the overall level of immersion. Be aware though, your controller battery is definitely going to deplete quicker than when you’re playing other PS5 titles so, if you’re not looking to charge it ever other night after a couple of hours of gameplay, you may want to reduce or even disable some of the controllers features. I recommend you don’t know, as they really add to the overall feel of the game.

Ratchet & Clank: Rift Apart is Sony’s first true showpiece title for the PlayStation 5. It’s engaging gameplay, spectacular visuals and lovable characters make for one of, if not, the best instalment in the Ratchet & Clank series to date. 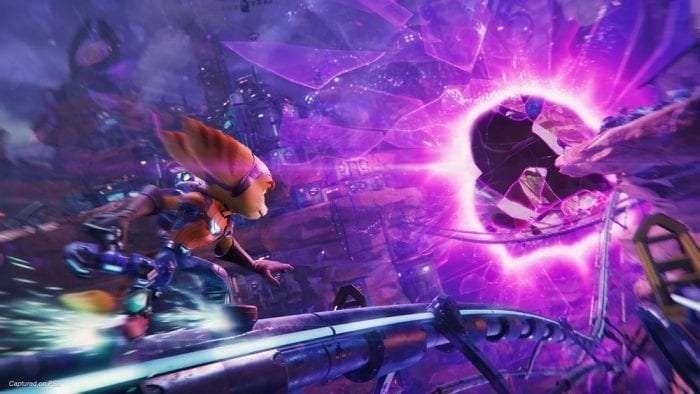 Ratchet & Clank: Rift Apart is available exclusively on the PlayStation 5 on June 11th – starting at €79.99. You can pre-order here.