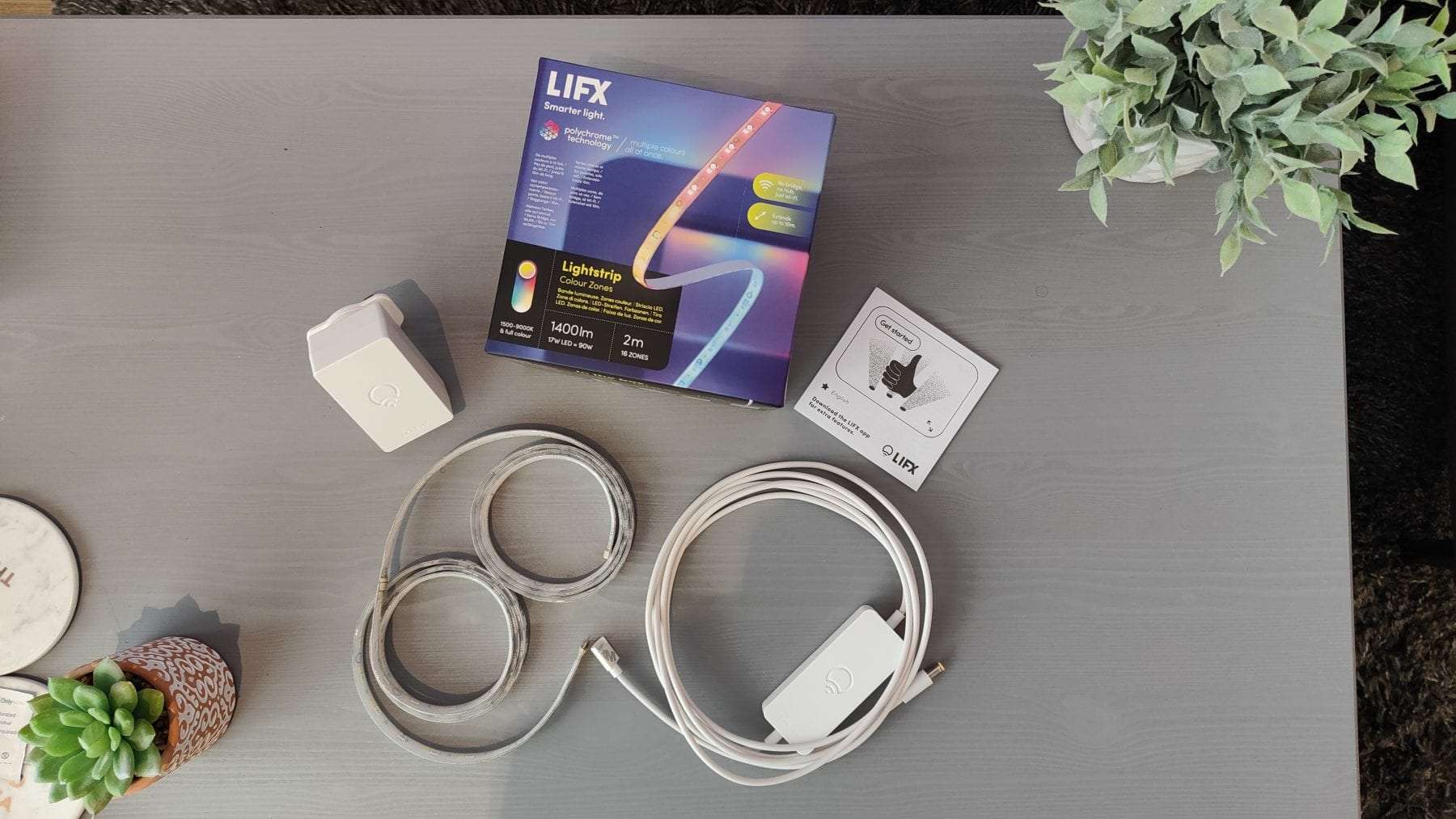 LIFX is one of many smart lighting companies that have been trying to catch up to the large lead Philips has built over the years. We have covered and been impressed by their Beam product in the past. The LIFX  is a multicolor LED strip that can be placed behind cabinets, bars, or your TV to provide accent lighting. It can be controlled remotely and offers an array of smart features. But what separates LIFX from other LED strips is the ability to connect directly to your wireless network, thankfully avoiding an expensive hub.

If you’ve dealt with LED strips in the past, everything should look familiar. Their starter kit comes with the controller and 2 meters of LED. The back uses 3M tape to secure which works well. However, this may make it a pain to move locations later on. LIFX allows you to connect up to 10 strips per controller. That’s 10 meters (33 feet) of LED.  An area that distinguishes the LIFX Lightstrip from competitors like Philips is the ability to create different zones.

With other brands, each individual strip can only be one color at a time. But LIFX has 8 different zones per strip. This means you can create a rainbow within each meter. A huge plus for the more creative people out there. A minor gripe is with the thickness of the strips. They’re just not as sturdy as I would like them to be. This shouldn’t be an issue once you’ve put the strips in place, but I would use some caution when handling them. 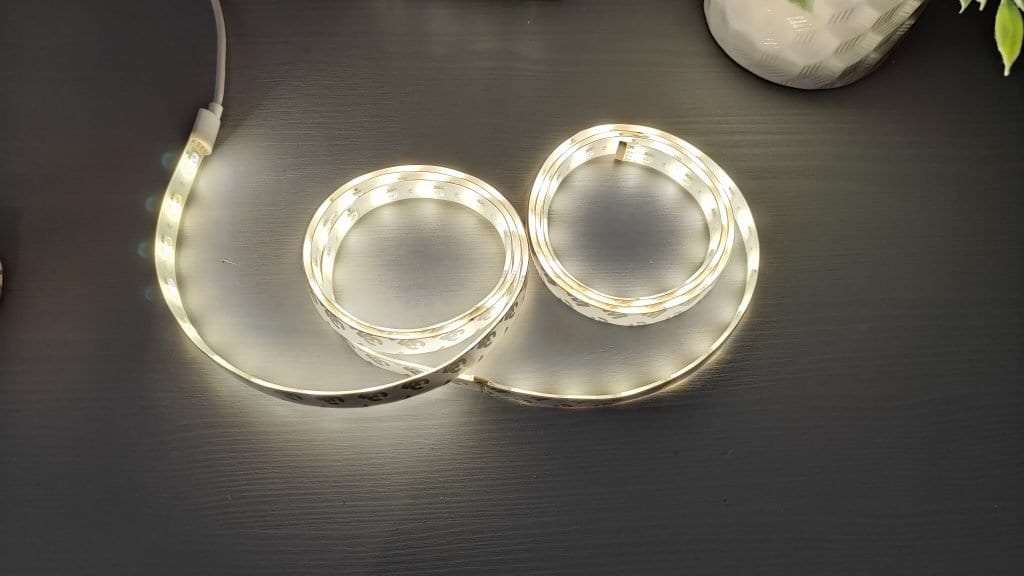 As mentioned earlier, the LIFX lightstrip doesn’t require a hub to work. It works by connecting directly to your home’s wireless network (2.4GHz only). You’ll need to install the LIFX app on your Apple or Android phone. Instructions are straightforward and takes a couple minutes to sync up. With an intuitive interface, the app lets you control every aspect of how the LED strips look. Using a “paint” feature, you can designate each zone (8 per strip) with the 16 million options available in the color wheel. The color temperature can be adjusted for daytime and nighttime use. And of course a dimmer to control the brightness.

The brightness and colour wheel options on the LIFX app

LIFX also includes some preset themes. These are just color schemes they’ve included on their own. You tap the theme you’re looking for under names like “Peaceful” and “Energizing” and see what it puts out. There doesn’t seem to be much use to these outside of experimentation. Effects are where you can really show off your creativity. Options such as candle flicker, color cycle, and strobe can set the mood for the room. A music visualiser is included which uses your phone’s microphone to attempt to match the lights with the beat of a song. It doesn’t work well at all. Then again, I’ve yet to find smart lighting that has mastered this.

The many different colour options available on the LIFX app

Working through your home’s Wi-Fi, there is understandably some lag between inputting an action in the app and it taking effect but it’s not a deal breaker, considering you don’t need to shell out for a standalone hub, just to wirelessly control the strip.

The actual LEDs really pop at max intensity. Colours remain crisp at all brightness levels and the multiple zones make a huge difference. The Lightstrip seamlessly blends two colors together when there is a transition. It’s a terrific effect that budget strips fail at. Despite that praise, not all colors are treated equally. White, red, and blue feel much stronger than green and purple (which no one can seem to get right). Sometimes you’ll notice a subtle difference when side by side. A minor flaw that they seem to constantly be tweaking in firmware updates. 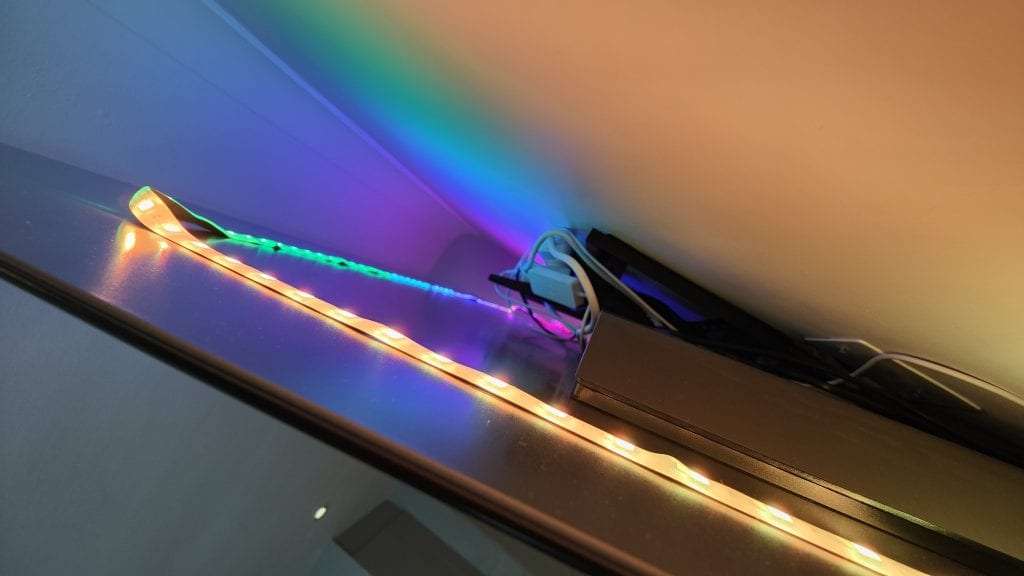 The LIFX Lightstrip 2M attached to the rear of my TV.

One of the most useful features, for my use anyway, is the ability to add the Lightstrip to your smart home set up which, in this instance, is a Google Home. Once added, you can simply use your voice to change the colour, brightness and themes on the light strip and you can turn it on and off too. They also support Amazon Alexa, Apple’s HomeKit and Samsung’s SmartThings.

For the creative types, the LIFX Lighstrip is, hands down, the winner among smart LED strips. They’re the only ones that feature multiple zones in each strip that allows immense customization. Their performance meets and exceeds their big name competitors. And you don’t need a hub to use them either. 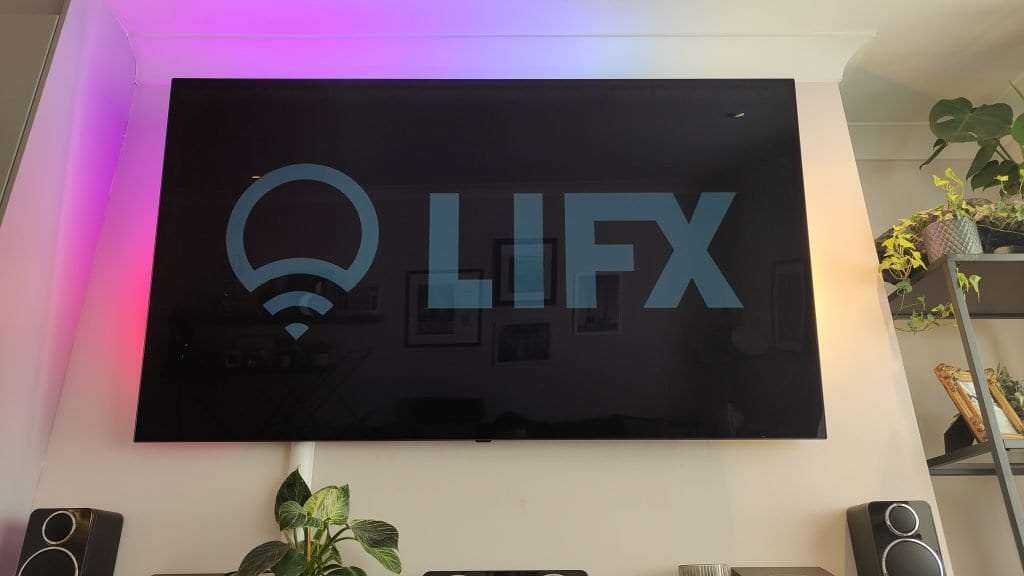 The LIFX lightstrip showcasing its rainbow of colours

With that said, they aren’t perfect. Connectivity issues rear their head from time to time (something that LIFX has improved on over the years). And there is some lag between the app and lights. But when you factor in their features, attractiveness, and price, they’re the best smart LED strips on the market.

The LIFX Lightstrip 2m is available for €89.99 on the official LIFX Europe website here.

The best smart light strip on the market

With up to 8 different color zones per strip, LIFX Lightstrip provides endless potential with these vibrant lights. Along with easy set up and a nice app, these are currently best in their class.