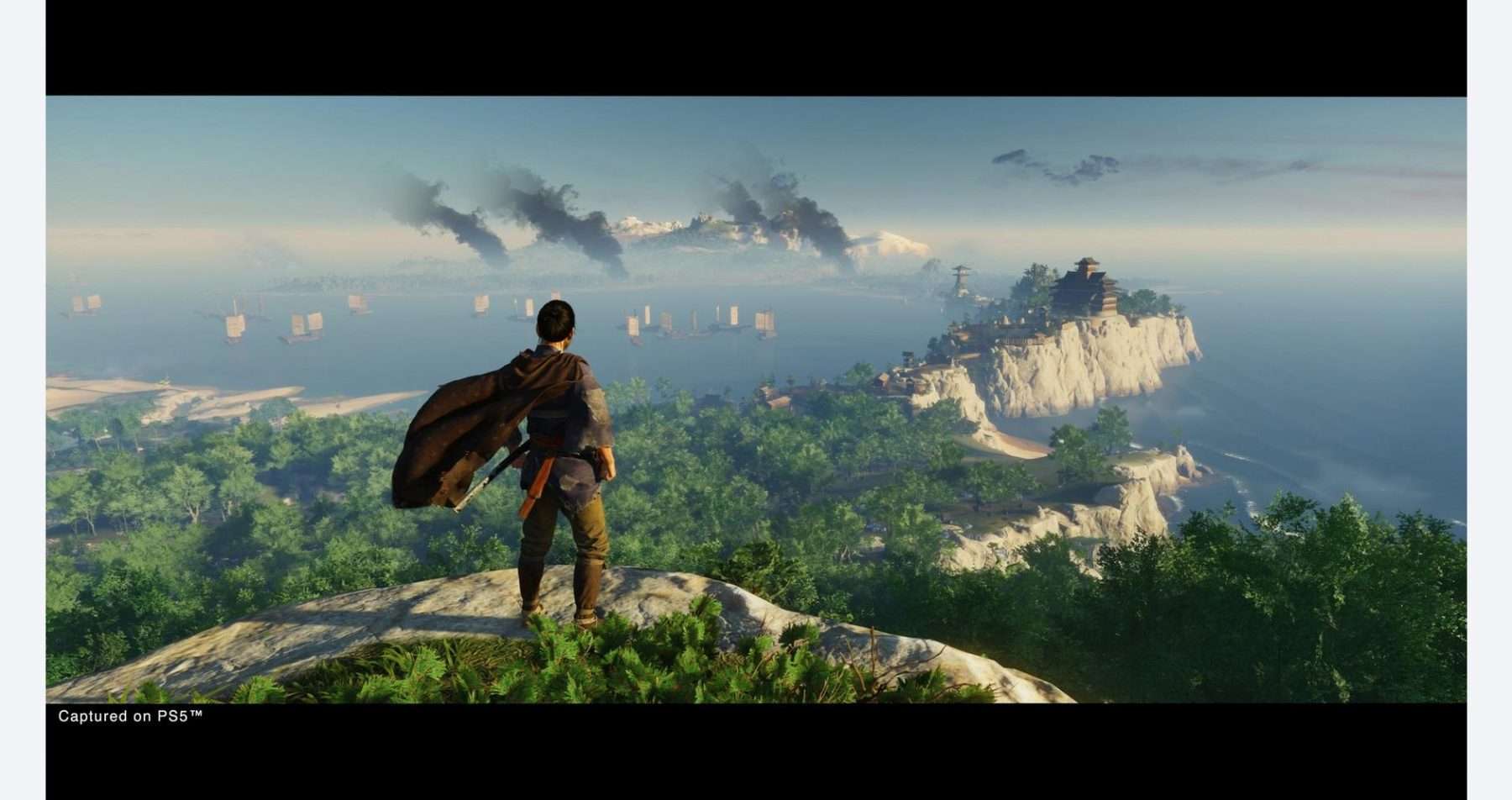 Over a year since its original release, Sucker Punch’s Ghost of Tsushima is getting its own ‘Director’s Cut’ Edition which, along with a number of other features, will also include its first major expansion, Iki Island, along with also being fully upgraded to support Sony’s newest console. How does it fair running on PS5, what can players expect when they venture to Iki Island and is it worth your time? Read on to find out in our review of Ghost of Tsushima Director’s Cut.

The Iki Island expansion takes players to the titular island and becomes accessible once players reach Act 2 of the main story In this new story, Jin travels to the island to investigate rumors of a Mongol presence led by a shaman named Ankhsar Khatun, or The Eagle. But soon, he finds himself caught up in events with deeply personal stakes that will force him to relive some traumatic moments from his past. 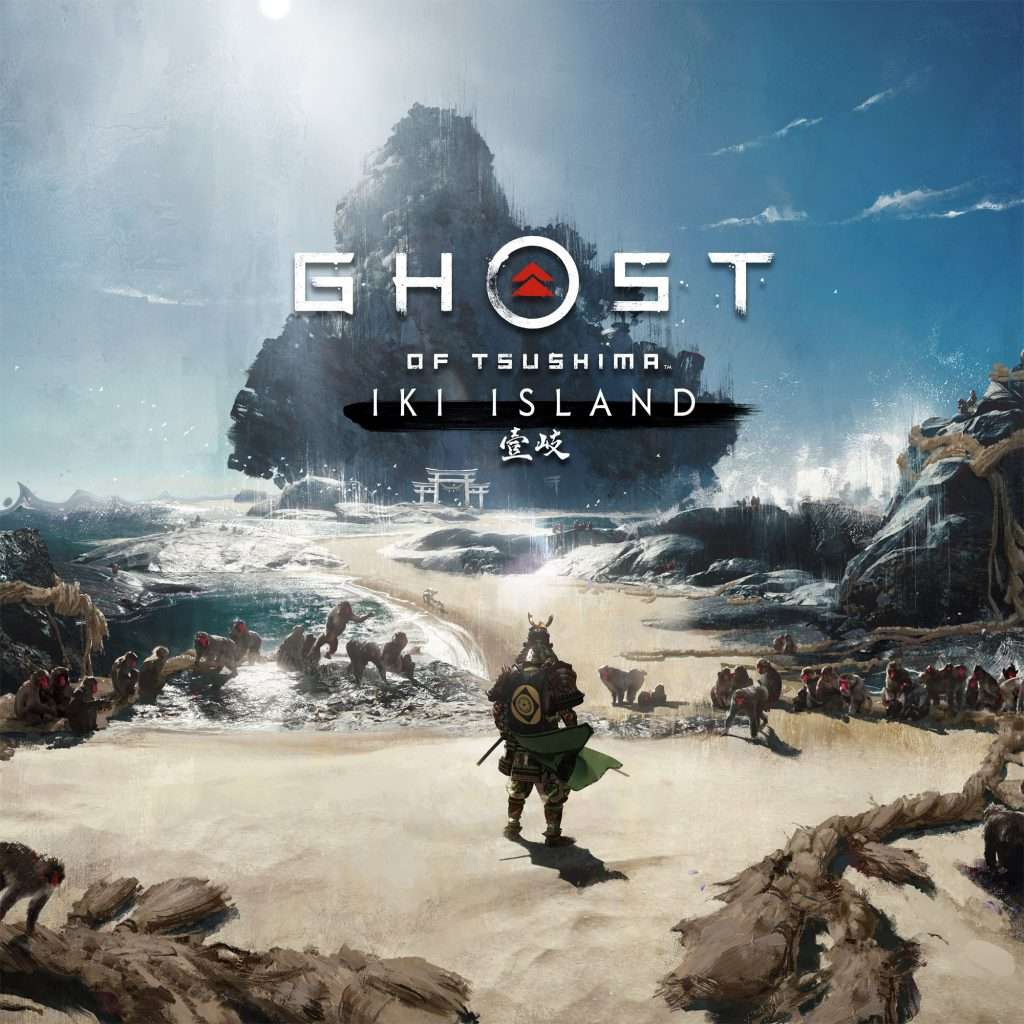 It’s probably best I don’t share much more about the story as, given its only a piece of DLC and not a full on sequel per se, it’s short enough that if I share any additional titbits on what happens on your adventure, it might take away from your experience exploring the new island.

What I will say though is It was great to be back in the world of Ghost of Tsushima and, as I expected, I was immediately immersed. Admittedly, I had to spend a bit of time to relearn all the button layouts, as it’s quite a complex game with a multitude of button configurations and combos but I was fine after 30 minutes or so.

Iki Island and its enemy inhabitants are definitely more difficult to take down than those of Tsushima. Quick and responsive switching between your different fight stances is more critical than ever to stay alive in battle.

The new ‘Shaman’ enemy type will chant on the battlefield, empowering their fellow fighters so you must first take them down so as to reduce the remaining enemies’ vigour and strength. Much like Doom Eternal’s ‘Buff Totems’. 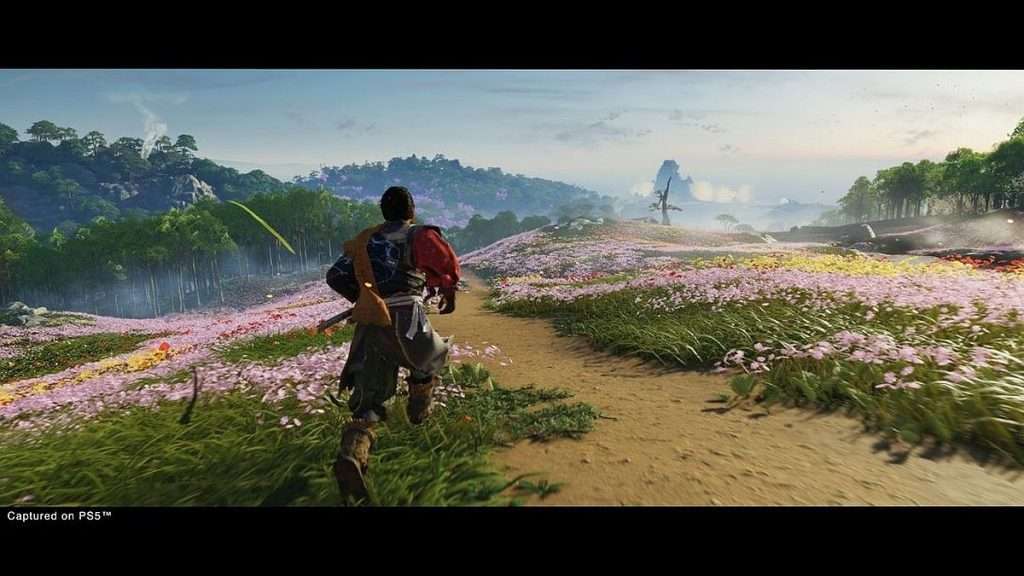 In terms of upgrade options, you now have the option to learn a new combat ability for your horse which allows you to ‘horse charge’ into a group of enemies, knocking them down and inflicting damage but also using up your resolve in the process so use this particularly ability wisely.

Other additional gameplay activities include (for the cat lovers out there) Cat Sanctuaries where, once discovered, will have you play a melody on your flute by tilting your controller up and down in time with the music to keep in tune, similar to the hit VR music game, Beat Saber. If successfully completed, you’ll unlock additional charms to help out whilst you sneaking around assassinating enemies.

There’s also a new bokken tournament arena in another section of the game where you can hone your fighting skills against a variety of different combatants.

These are just a few of the additional activities scattered throughout the ideal with quite a few more I won’t spoil.

For those of you lucky enough to pick up a PS5 and are interested to see how the new console and controller is optimised for this Director’s Cut of the game, I don’t think you’ll be disappointed. The DualeSense implementation is very well handled with the controller’s speaker being used to great effect, right from the very beginning.

The adaptive triggers and haptic feedback are also very well implemented and help extend the overall immersion levels which, with such a stylistic game as Ghost of Tsushima, were high to begin with. Playing melodies on your flute not only subtly vibrates the controller, the song being played also comes from the speaker in the controller. I feel that it’s small touches like this that add to the overall experience. 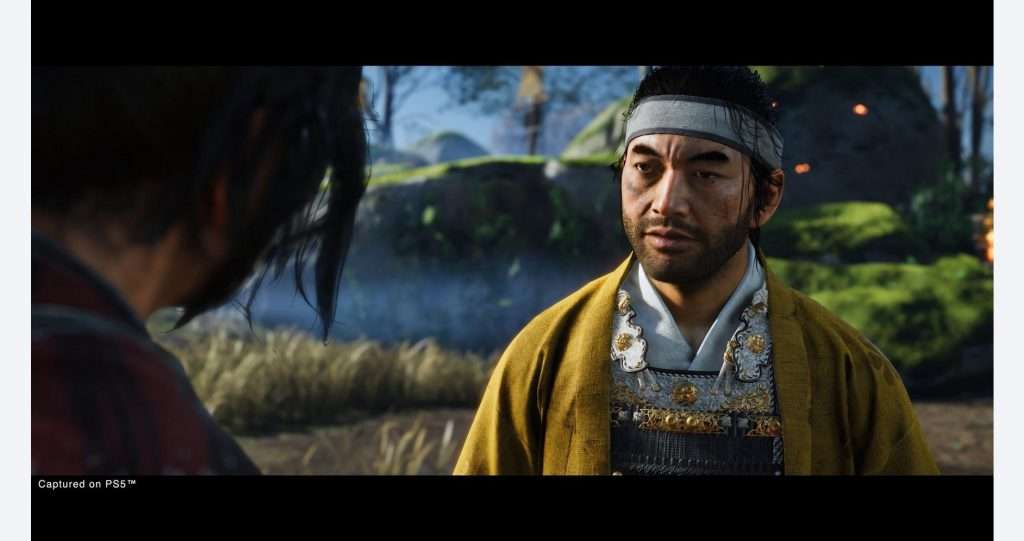 Thanks to the PS5’s super fast SSD hard drive, Ghost of Tsushima’s load times are basically none existent. Fans of the game on PS4 already knew how well optimised Sucker Punch had made the load times on the previous gen console, now things are just stupidly fast, which is great for getting right back into the action after dying, for example.

We know that Ghost of Tsushima was one of those games to benefit from Sony’s previously announced ‘Game Boost’ functionality which helped push the games framerate up to 60fps, ability with a dynamic resolution targeting 4K. Now, with this official PS5 update for the game, visuals and framerates have never been better with Iki Island looking absolutely spectacular running on the PS5. I consistently had to stop myself from pausing the action, just to take another screenshot of a stunning sunset over the wide expanses or sheer cliffs. 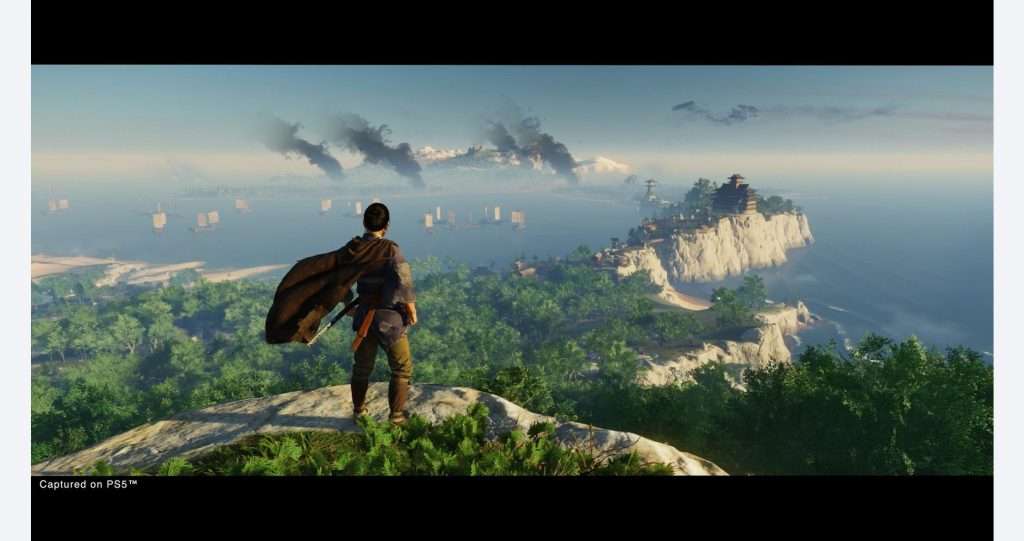 This, paired with the aforementioned DualSense implementation and improved load times make Ghost of Tsushima feel like a true next gen title already.

The implementation of 3D audio via headphones, thanks to Sony’s own Tempest Engine, adds even more immersion to the title so you hear the wind howl around you, birds flying above and arrows flying past you in the heat of combat, it’s a fantastic experience. 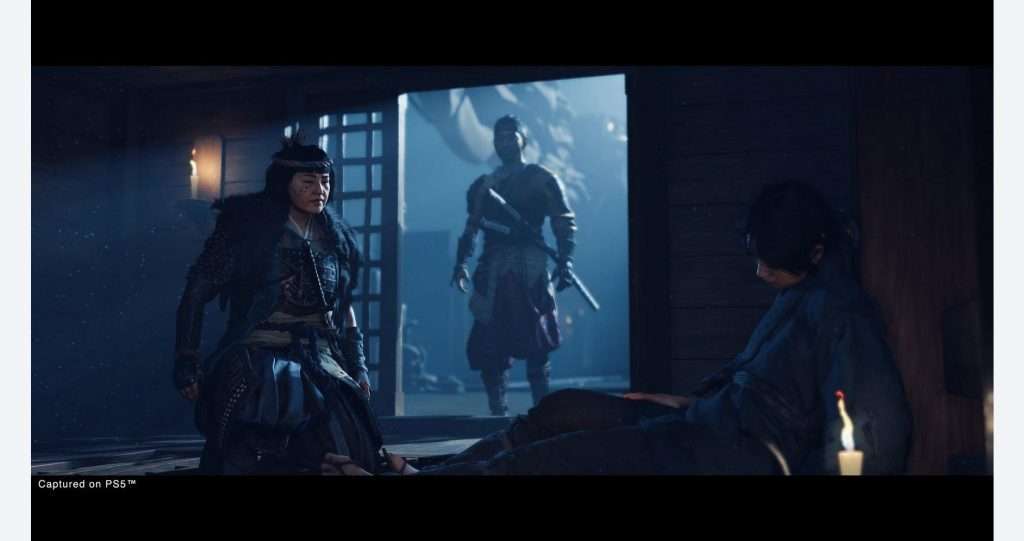 PS5 players will also get access to Japanese lip-sync option so you can play the entire game with Japanese dialogue correctly matched to the characters faces to get an even more authentically Japanese experience.

We must note, the Director’s Cut version of the game is also still available on PS4, you just won’t be getting the visual and loading upgrades, DualSense features (for obvious reasons) or access to the Japanese lip sync option. 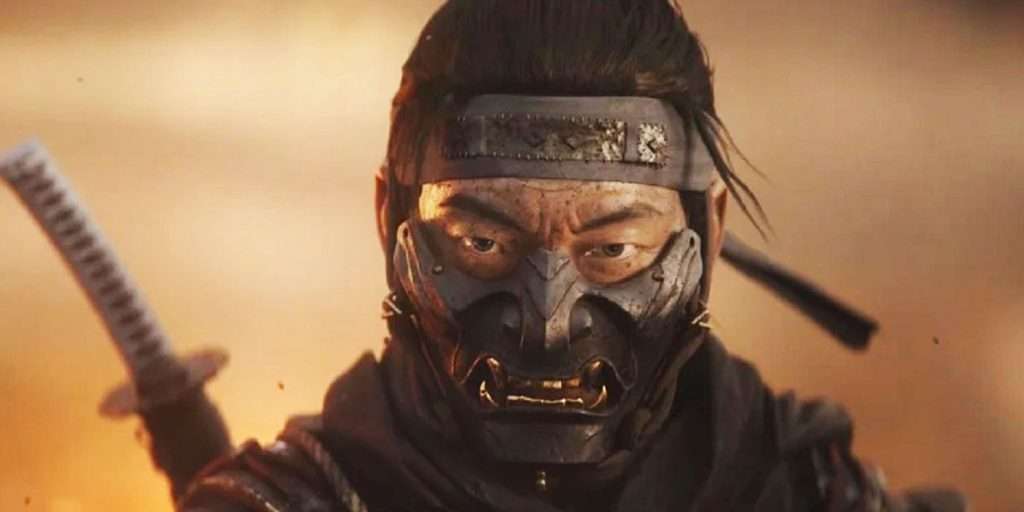 In terms of actually moving from your PS4 save over to playing the game on a PS5, it was actually straight forward enough but, looking at Xbox’s Smart Delivery set up, Sony still has a way to go to streamline the whole process.

If you are looking to do the above save transfer, make sure your PS4 save is either stored in the cloud via the PS+ Cloud Save functionality or have it saved to a USB stick from your PS4 console for moving over to the PS5.

Ghost of Tsushima Director’s Cut is the definitive edition of Sucker Punch’s latest masterpiece. Running on a PlayStation 5 with the new DualSense and 3D audio implementation (via headphones) is a fantastically immersive experience.

The studio continues their engaging story telling whilst interweaving deeper philosophic questions around the reasonings for conflict and the ways in which each opposing side interprets the other.

For returning fans of the game, you’re not going to be disappointed on either PS4 or PS5 with Iki Island worth your time and money alone. For PS5 owners, this really is a showpiece for what the console can achieve when a previous gen title is properly and lovingly upgraded to benefit from all of the new consoles features. 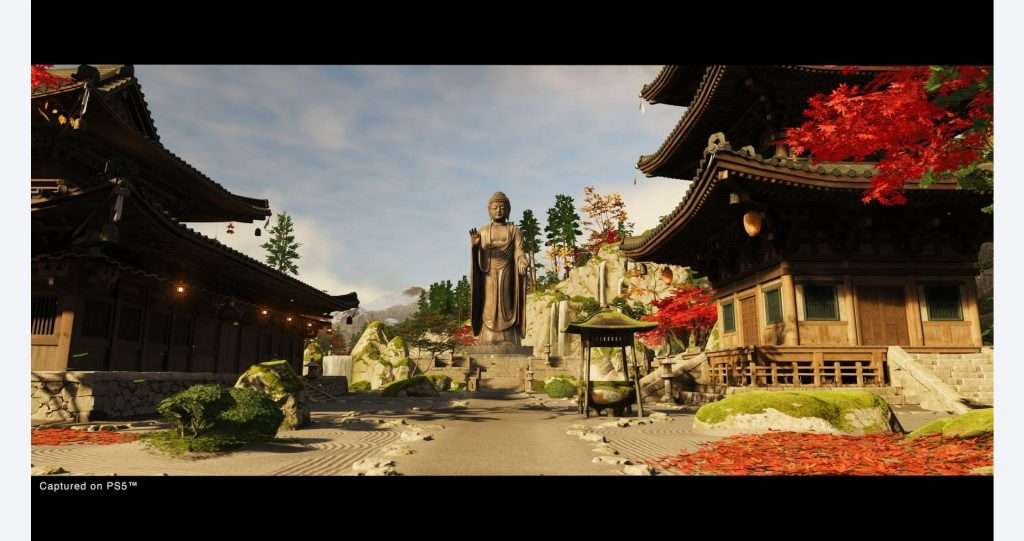 PS5 owners can upgrade to directly to the PS5 version for €29.99 and transfer their PS4 save over via the PS+ cloud save functionality or via a USB drive from your old PS4 console.

Ghost of Tsushima Director’s Cut is the definitive edition of Sucker Punch’s latest masterpiece. Running on a PlayStation 5 with the new DualSense and 3D audio implementation (via headphones) is a fantastically immersive experience.