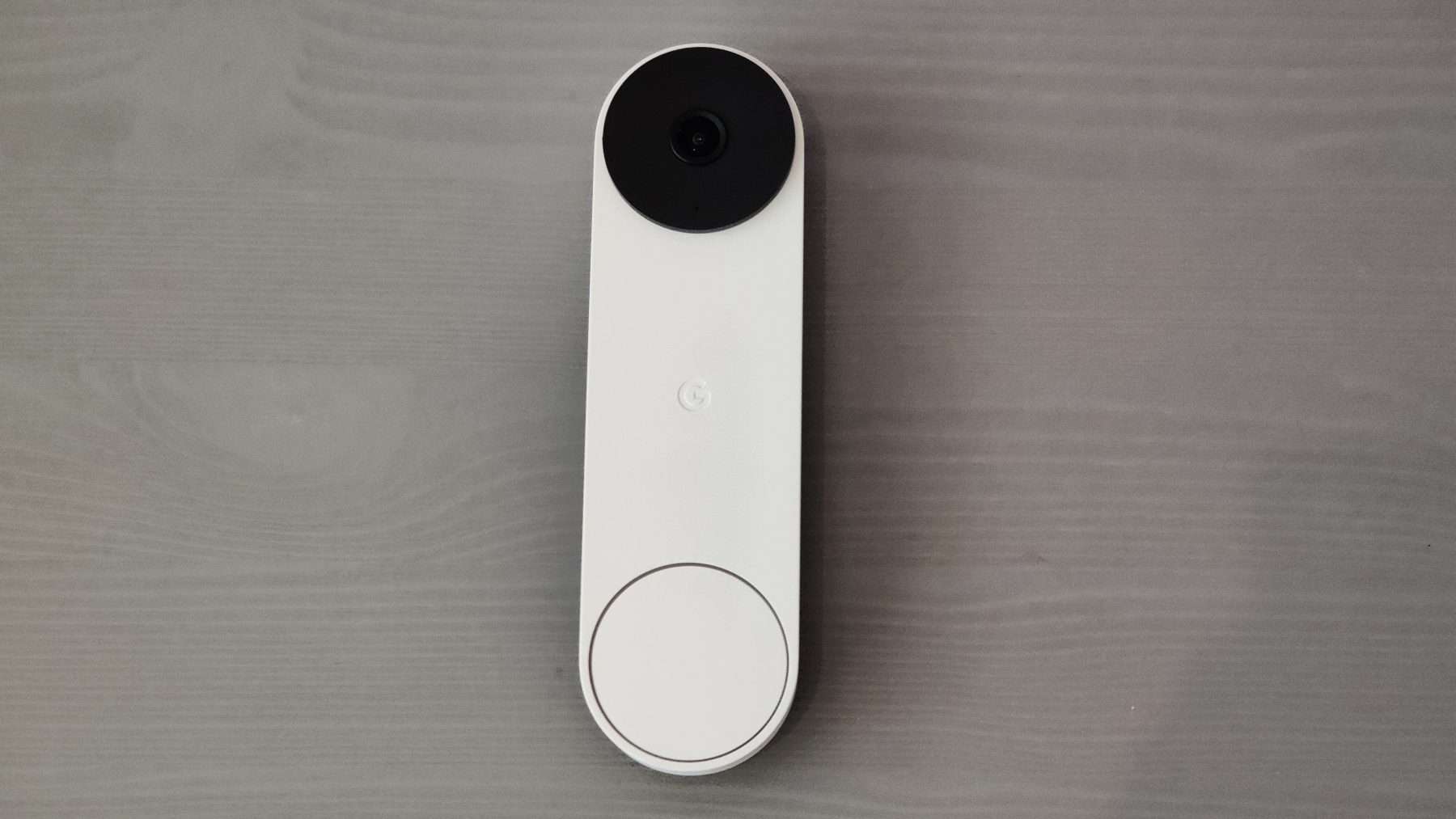 If you’re someone who’s already firmly engrained into Google’s ecosystem, Google’s first-party smart home products have always been a great option. The Nest Hello video doorbell was itself an great choice, thanks to its minimalist design and super smart features. Now, there’s a follow-up, in the Google Nest Doorbell (battery). 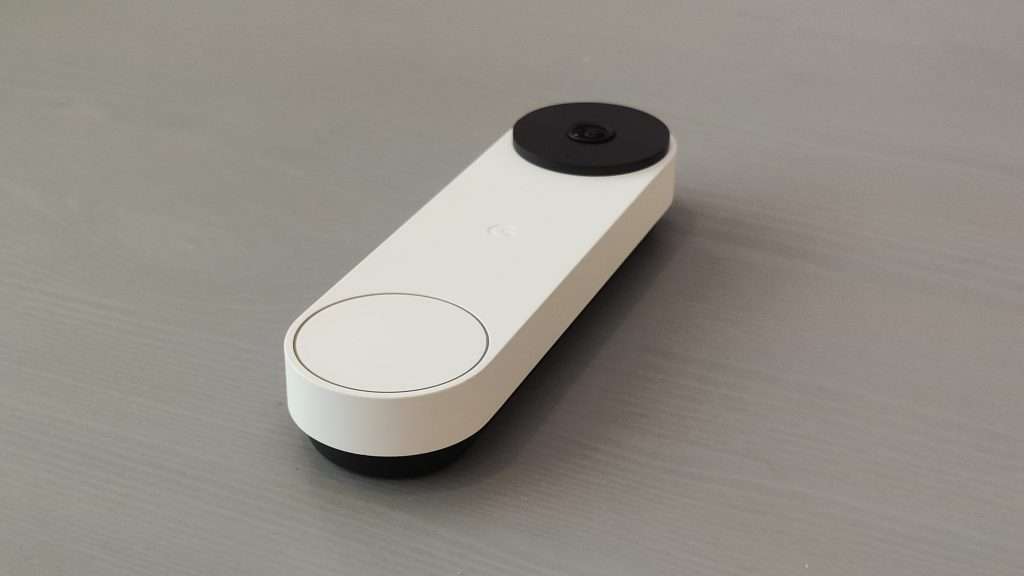 The first thing to notice about the battery-powered Google Nest Doorbell is its design, and it’s not a bad-looking product at all. That said, it doesn’t really share many design ques with its older, wired sibling. Just to be clear though, you can actually use the new battery model in wired mode too, so if you prefer it and don’t want to deal with batteries, you can still use it.

Perhaps the biggest reason the battery-powered Google Nest Doorbell looks so different is the fact that it’s much larger. The device measures in at 160mm tall and 44mm wide. If you’re looking for something to place on a doorframe, you’ll need to make sure it fits. Unfortunately, when it comes to colour options, Irish consumers only get the white ‘snow’ option but other markets have the choose between a darker ‘ash’ grey colour, a ‘linen’ cream colour and a really nice ‘ivy’ green colour. We do hope these options make their way to the Irish market. 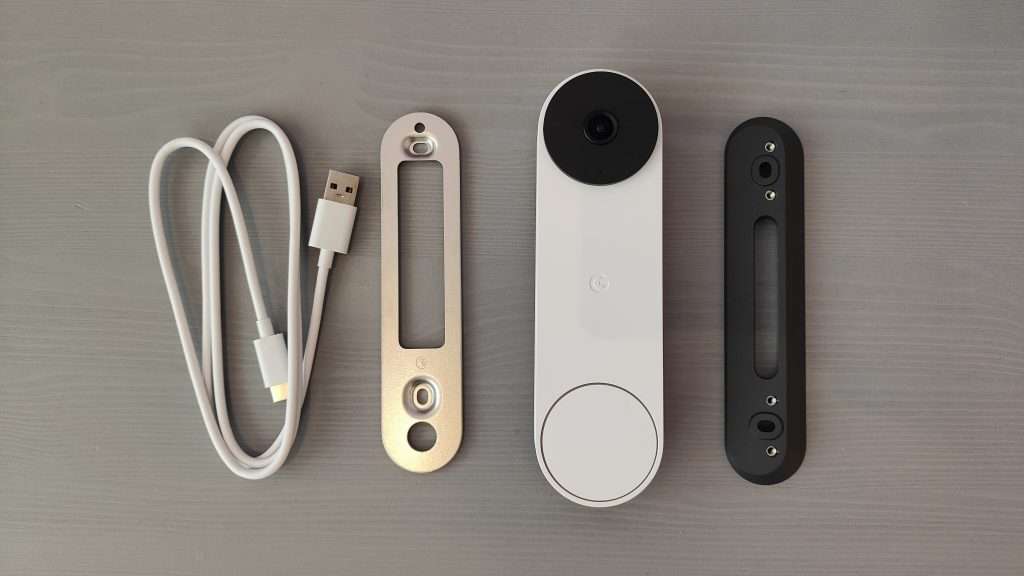 The main contents in the Google Nest Doorbell (battery) packaging with the ‘wedge’ to the far right to help angle the doorbell better.

The new model offers a big button at the bottom, with an LED light ring that lights up around it when the button is pressed. Apart from the doorbell itself, in the box, you’ll get the hardware to mount it flat or at an angle, a charging cable, and the wiring to attach it to your existing chime. It’s pretty much everything you’ll need.

Ultimately, the battery-powered Nest Doorbell is a good looking product. But it is pretty bulky, which is worth keeping in mind.

Setting up the Doorbell is pretty painless. You’ll start by taking it out of the box and plugging it in. Then, download the Google Home app if you don’t already have it, and scan the QR code that comes in the box. Follow the on-screen instructions, and you should be good to go. 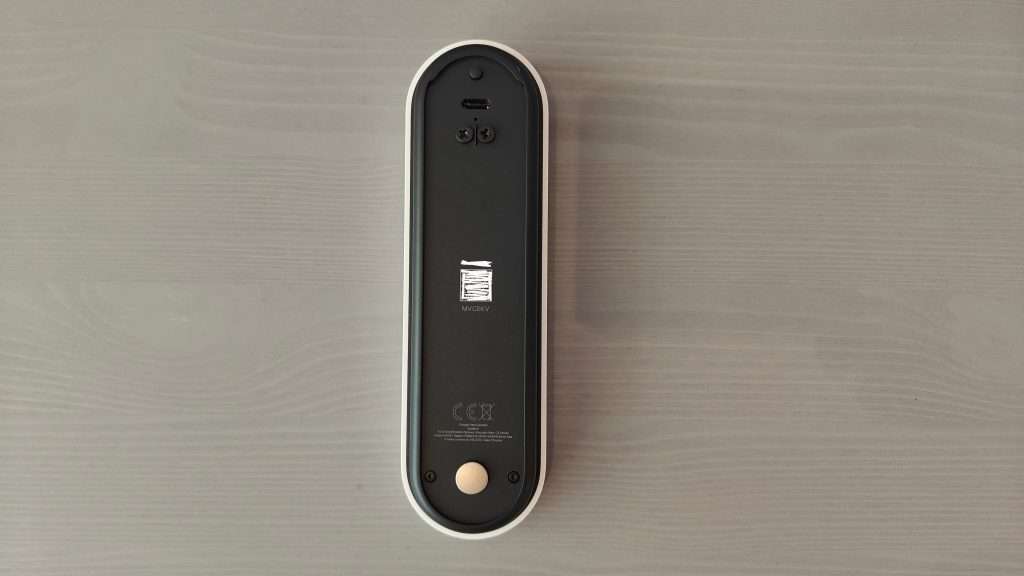 The rear of the Google Nest Doorbell (battery)

During the setup process, you’ll be asked about a range of different features. For example, you’ll be asked if you want to enable Familiar Face Detection, which can recognize faces and alert you to who’s there. We’ll get a little more into the image recognition tech later. 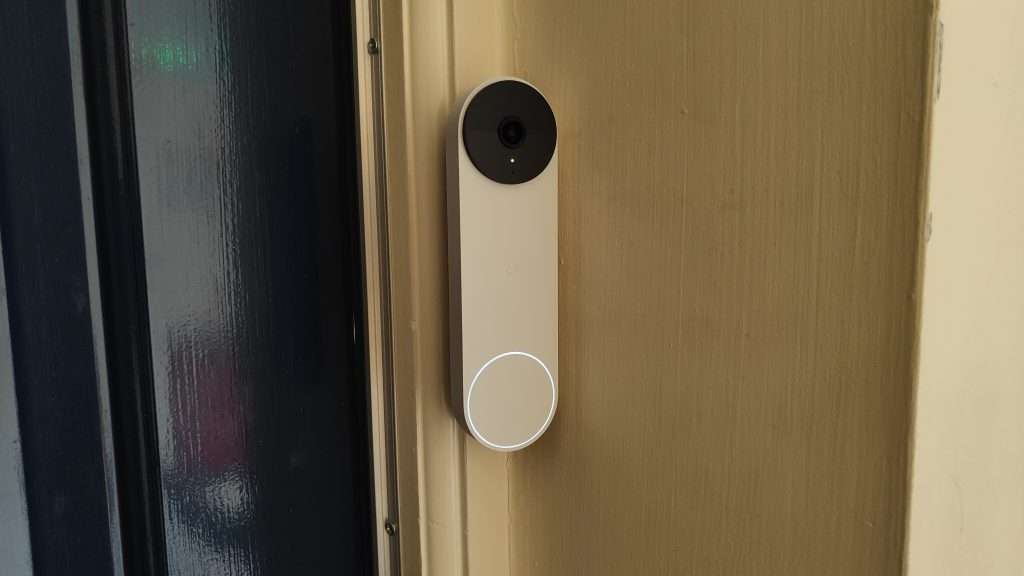 Setting the Doorbell up physically is a little trickier than setting it up with your Google account. You’ll need to find a good place to mount the device, and decide if you want it angled or not. And, if you want to use it in wired mode, you may not have a choice as to where you mount it. If that’s you, you’ll really need to make sure the device fits before you buy. You’ll get mounting screws and a wiring harness in the box, and the setup instruction in the app will help you in that process. 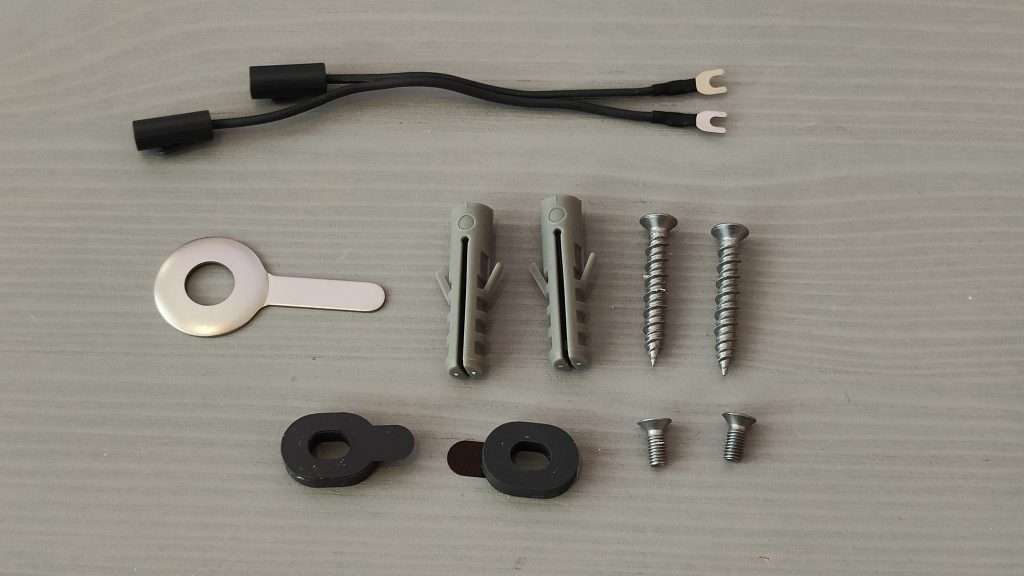 Like any recent Google smart home device, the battery-powered Google Nest Doorbell is packed with smart features. Unfortunately, some of the best ones are locked behind a subscription but they have moved a number of them to be processed ‘on-device’ so you are getting access to some handy ones, right out of the box.

Lets start with the basics. When someone comes to the door and presses the button, you’ll get an alert on your Google Assistant-powered smart speakers, and a notification on your phone. You can pull up the camera’s live feed to talk to the visitor through the two-way audio, and the camera will start recording. So far, that’s pretty basic smart doorbell stuff but well handled via the Google Home app on your phone or your Nest display in your home. 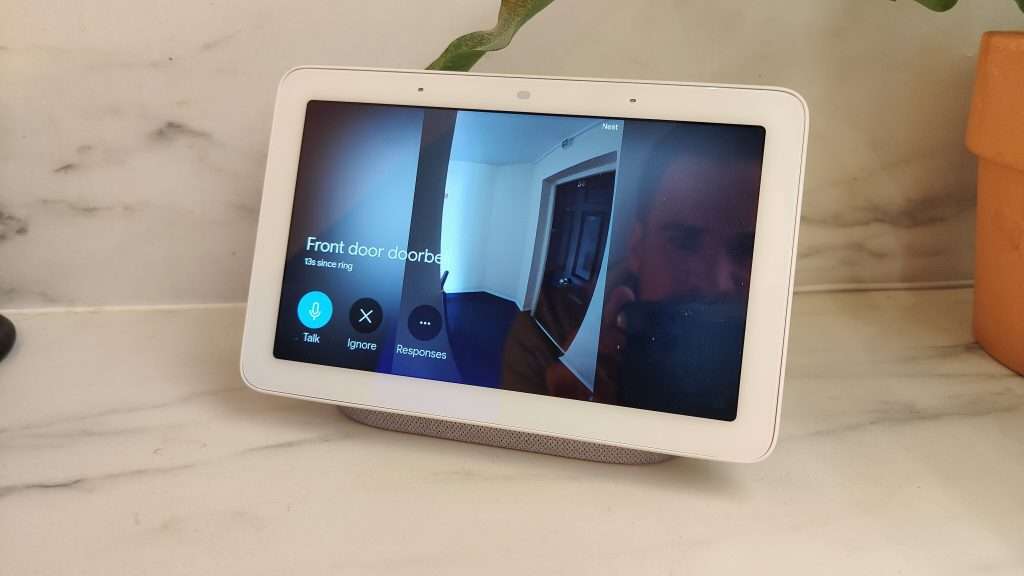 When it’s not just being used as a smart doorbell, it essentially acts as a security camera outside your door. You can set activity zones, and you can get notifications based on activity in those zones. For example, you can set them to ignore animals moving, but alert you to people. You can also set general alerts based on the entire video. And, you can get specific notifications when there’s a package at your doorbell, which is actually very handy. Unfortunately, you’re unable to stream footage from the doorbell to a TV with a Chromecast attached or Android TV with Chromecast built in. We think it’s to do with compatibility issues right now so hopefully it’s something they update the device to do in the future.

Now, if you decide to pay for a Nest Aware subscription, which starts at €5 a month and goes up to €10 for Nest Ware Plus, you can get access to more features. Some of them make sense — you can up your video storage to 30 days with Nest aware, and 60 days with Nest Aware Plus. Familiar Face Detection also requires a Nest Aware subscription. To get the most out of this product, you’ll definitely want to think about subscribing.

The video quality on the battery-powered Nest Doorbell is fine, but it’s not amazing. The camera offers a 960 x 1280 resolution, with support for HDR and Night Vision. It has a 145-degree field of view, which isn’t bad for a smart doorbell in this price range. Keep in mind, that’s a vertical field-of-view, and the horizontal field-of-view is much lower than that. This product is built to help you see people and packages right in front of your door, and not necessarily to see a wide view outside the front of your home. 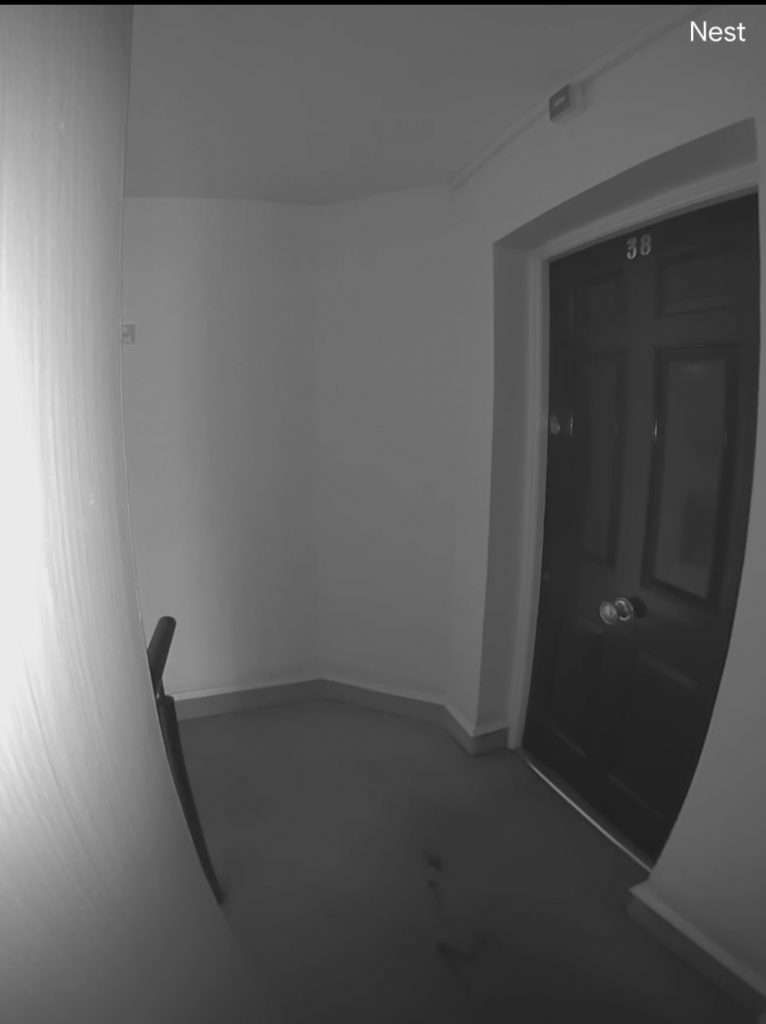 A night vision shot from the Google Nest Doorbell (battery)

If you’re looking for the most detailed view at what’s happening outside your door, this camera probably isn’t the way to get it. But still, it’s definitely good enough to make out the faces at your door, and to see some detail of the camera’s surroundings. You can toggle between different video qualities in the app too. This can impact battery life and data bandwidth. We generally kept it at ‘Max’.

We would have liked to see a better video quality in general, and a wide horizontal field-of-view. But again, it’s a little hard to complain given the price range, and the fact that the camera is so feature-packed.

Given its overall size and dimensions, the battery life on the Nest Doorbell (battery) is actually pretty impressive. Google estimates around 2-3 months of normal use, but we’re getting an estimate of 5 months on the device’s current activity levels. Admittedly, we’ve set ours up in an apartment complex with much less activity happening in the cameras viewpoint so it’s not being activated as much but we’re still very impressed with this battery life. Now, we’ve actually got to use the device for a few more months to see if it actually lives up to this estimate.

The Google Home app has gotten better and better, and it’s now relatively easy to use. If you have lots of smart home devices in there, you’ll be able to browse through them and tweak their settings.

There are a lot of settings for the Google Nest Doorbell to go through, and some of them can be slightly tucked away. Once the device is set up, it’s worth going through all the different menus.

In the app, you can also see a history of recorded events, see a live feed from the camera, and so on. You can also set quick responses for when people are at the door. That means you can quickly tap “You can just leave it” when there’s a package and you can’t actually talk to the person that’s there. Those kinds of things seriously add to the overall experience.

The battery-powered Google Nest Doorbell probably isn’t the way to go if you just want the best-quality video. But if you’re already ingrained into Google’s ecosystem, and care more about the cool, smart features, which are pretty impressive in their own right, then this is absolutely the smart doorbell for you. That said, to really get the most of the doorbell, you will need to look into a Nest Aware subscription so that will add to the overall cost of having the device in the long run.

The Google Nest Doorbell (battery) is available now in ‘Snow’ white for €199.99 on Google’s official store.

The new Google Nest Doorbell (battery) is a great addition to anyone who’s already in the Google ecosystem. It offers some useful smart features and impressive battery life but its video quality falls slightly short and some of the more useful features such as Familiar Face Detection are locked behind a ‘Nest Aware’ subscription, so it’s just something to be.. aware of. Its €199.99 defininitely gives it a competitive advantage over its rivals so Google Nest fanatics are sure to be pleased with the overall package being offered.