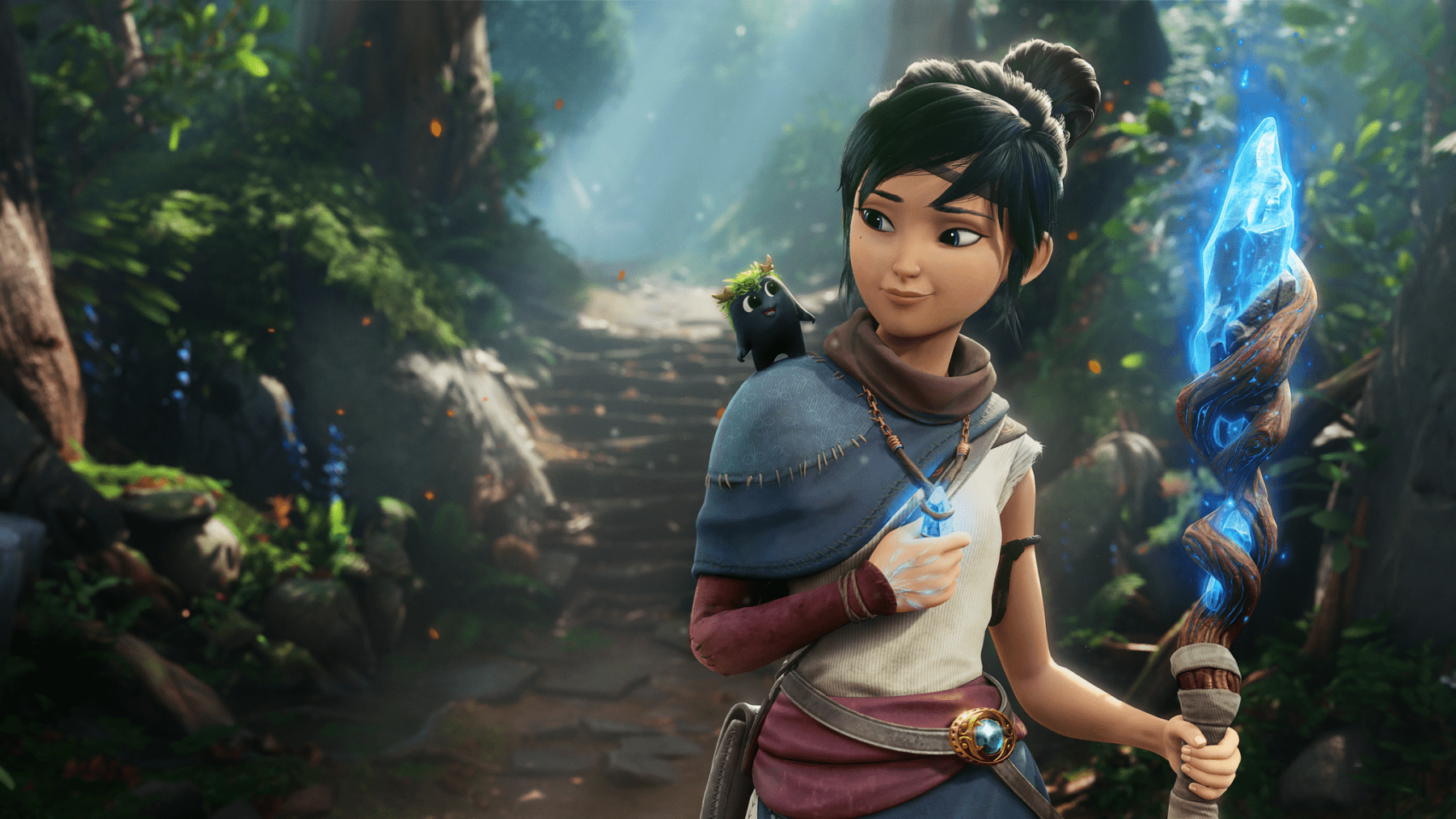 Originally revealed last June at one of Sony’s showcase events for the yet to be released PlayStation 5, Kena: Bridge of Spirits really captured viewers’ attention with its beautiful visuals and endearing main protagonist, Kena.

Unfortunately, Covid-19 and the global pandemic delayed its much anticipated launch from late 2020 to September 21st just gone but, for us anyway, we feel it was worth the wait.

For anyone keeping up with the games development, you’ll have seen that Ember Lab, the game’s fledgling developer, has created quite the dedicated following. Expectations for this title were high and fans were keen to get their hands on the game.

We’ve been playing Kena since just before launch and have just wrapped up the main storyline so below is what we think of PlayStation’s newest ‘timed’ exclusive.

Right from the off, the game has quite an intriguing opening with little in the way of exposition or background story building, which isn’t a bad thing, as it let’s you jump straight into the action.

You control Kena, a Spirit Guide helping lost souls make their way to the afterlife. At the start of the game, you uncover an abandoned village afflicted with corruption where trapped spirits are causing chaos and unnatural decay. In the sacred shrines of this abandoned village, you discover wooden masks created to honor the lives of deceased villagers. 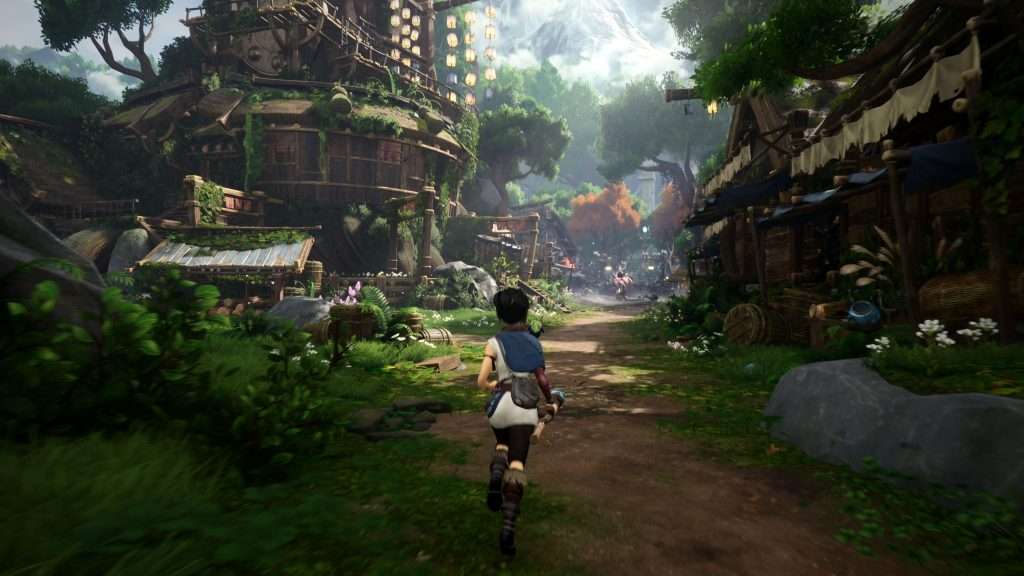 The Abandoned Village in Kena: Bridge of Spirits | TheEffect.Net

The decomposing masks symbolize a spirit’s movement into the next life, but many of the masks remain intact. With the help of the Rot, and you knowledge of the Spirit Realm, you must face the pain of your own loss as you untangle the secrets of this forgotten community.

There’s a well thought out narrative arch that, understandably, for spoiler reasons, I can’t go into too much detail on but the team at Ember Lab really have honed an engaging narrative and one which they should be really proud of.

The team at Ember Lab haven’t necessarily reinvented the wheel when it comes to combat mechanics but what they have implemented is polished and well-rounded.

At a very basic level, R1 and R2 are used to unleash light and heavy staff attacks respectively. It’s actually reminiscent of the likes of Horizon Zero Dawn and the more recent Assassin’s Creed titles. There’s also a lock-on mechanism by clicking R3 which is a simple yet much welcomed support for taking on multiple enemies at once.

Obviously, these aren’t your only options in battle. As you progress through the game, you’ll also be able to upgrade your combat abilities but you’ll need ‘Karma’. To get it, you need to defeat enemies, restore various environments to their former glory or simply find fruit for the Rot to eat. 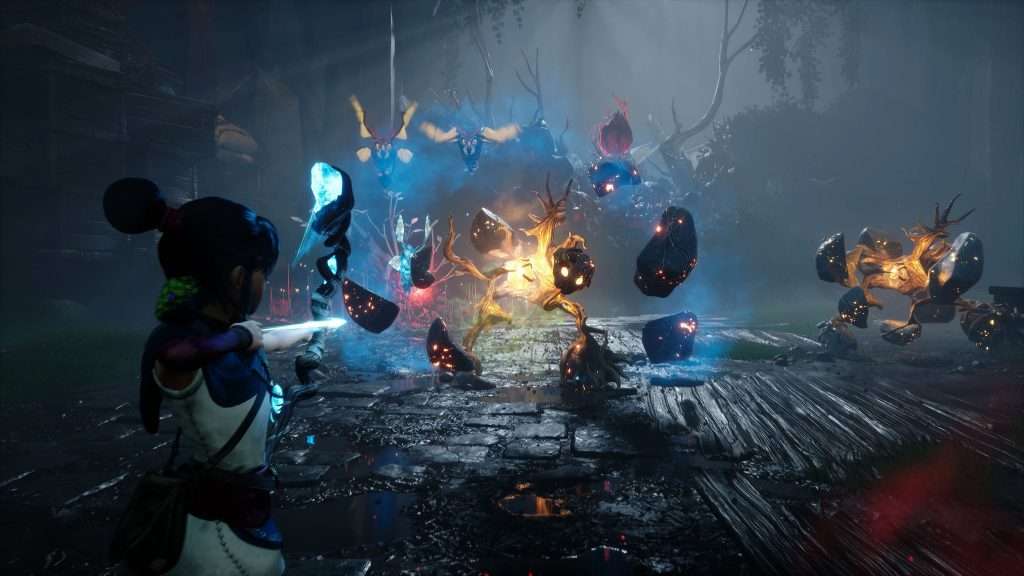 Spirit Bombs are one such upgrade which, when thrown, will cause nearby fallen boulders to levitate, turning them into floating platforms and allowing you to get to near areas of the world. They can also be used in combat, which is handy. The overall animation of this particular ability is really well done and its just one of the many upgrades available.

One of the very first upgrades you get is your ‘bow’ which actually is formed by you holding your staff up and pulling it back into a bow form with spirit energy to allow you to fire at targets across the environments and take down enemies.

Early on in the story, you’ll also be gifted a ‘Spirit Mask’. When you wear it, it will help show you the right path, open spirit Barriers and reveal objects of importance in the environment. It’s similar to ‘Odin’s Sight’ in Assassin’s Creed Valhalla, which highlights points, objects and characters of significance in your immediate vicinity.

The game will also have you hunting and gathering a number of collectables scattered across the world including the incredibly cute but oddly named ‘Rot’ who really give off some serious ‘Pikmin’ vibes. 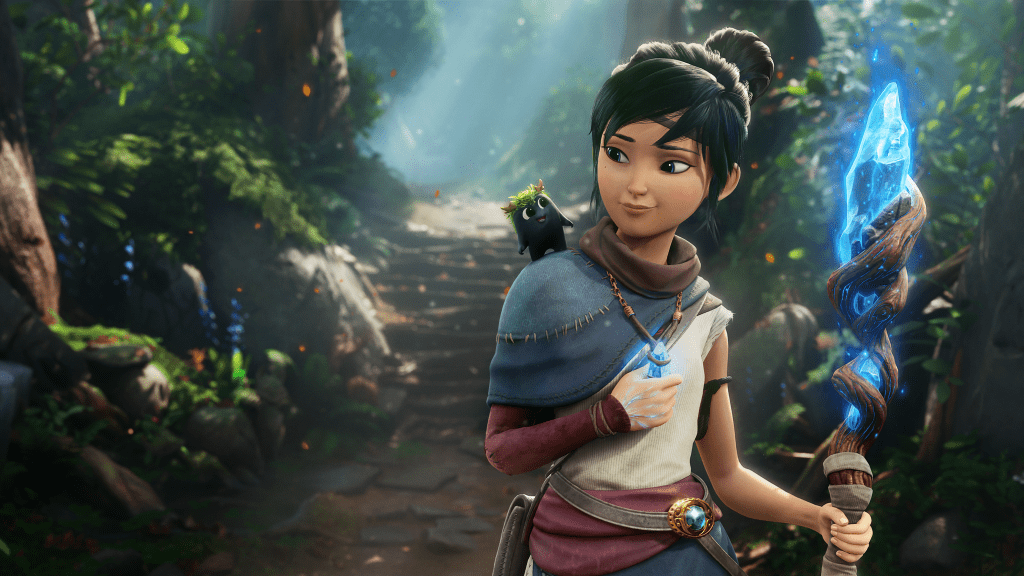 Throughout your playthrough, you’ll rely on these little black magical fluff balls to solve various interactive puzzles and even take on some of the more difficult foes you encounter.

The more Rot you collect, the more you can level up their abilities and expand the number of actions they can do for you, like destroying ‘Deadzone Hearts’ which are basically like giant infecting pulsing flower bulbs.

You’ll also come across giant flower-like creations known as ‘Forest Tears’ which temporarily restore the Rot to their original form.

When in this form, you can use the right stick to move the cloud around and attack enemies, destroy barriers and clear corruption. Actually controlling the Rot this way takes some getting use to but we got the hang of it after a while. 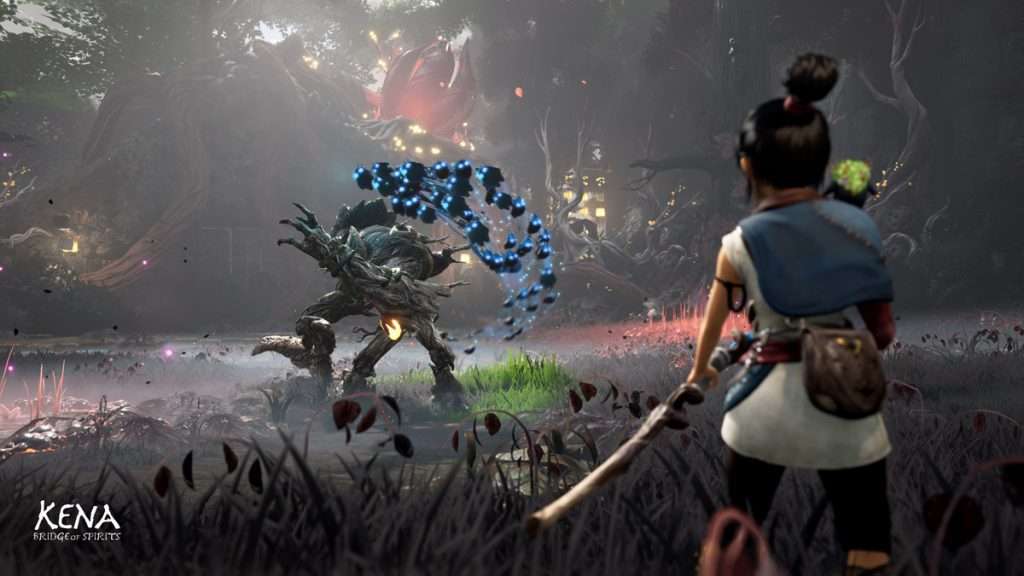 When things get a little too heated though, they will get scared and ‘go into hiding.’ The only way to get them to come back to your aid is to attack the very enemies which sacred them off in the first place.

Doing so will help you build ‘Courage’, sort of like your very own ‘Energy’ bar, or circles. Once a circle is filled, you can carry out various Rot attacks like binding enemies up or destroying more Deadzone Hearts like what we mentioned above.

Courage ‘Drops’ can also appear in battle and you can collect it with your Pulse (L1) or by simply running over it, this will allow you to fill your Courage rings even faster. 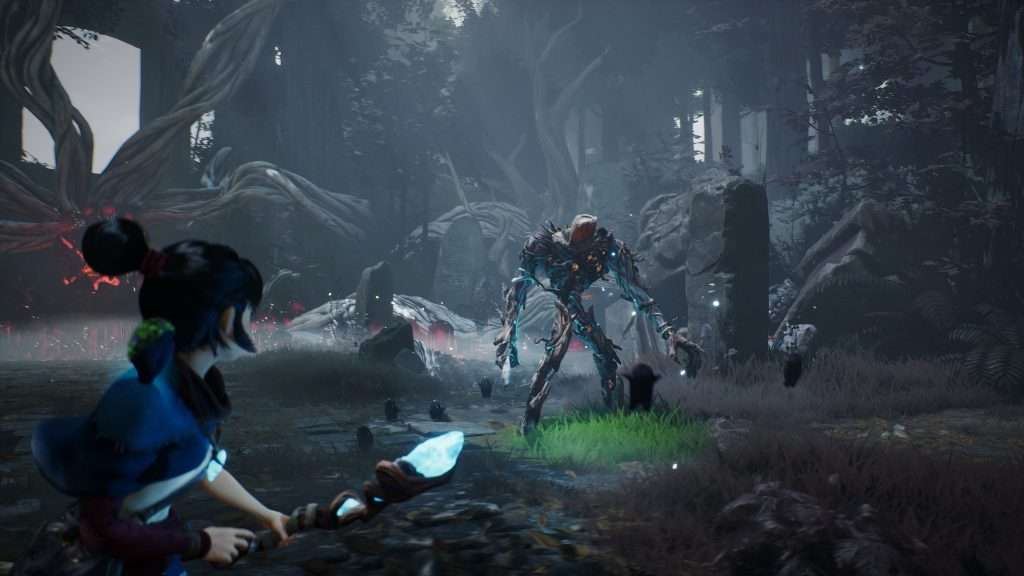 In practice, the mechanic works well and keeps combat engaging but not too easy either though. You must always keep moving to avoid incoming attacks and be quick off the mark to land the perfect counter blow and build your Courage.

Doing this generates a visual striking and colourful shockwave of flowers and plants across the immediate area, allowing you to open new traversal paths and continue on your adventure.

Playing in the 60fps ‘Performance Mode’ on PS5 allowed for extremely fluid-feeling motion and combat, along with general world traversal. There’s also a ‘Fidelity Mode’ which cuts the framerate in half but cranks the overall resolution to a full-fat 4K presentation which really does look spectacular. Speaking of which, here’s what we thought of the Kena: Bridge of Spirits visuals.

We spent our time reviewing Kena on a PlayStation 5 and Ember Lab have created a stunningly realised world that wouldn’t look out of place in the latest Pixar or Dreamworks animation film, especially with the beautifully crafted cutscenes.

Not only are the character models and animations meticulously well done, Ember Lab’s utilisation of Unreal Engine’s fantastic bokeh (background blurring) effect really adds an impressive level of polish to the overall presentation.

The particle effects used throughout the game, from Kena’s staff and various attacks to larger objects such as falling leaves really add another level of immersion. 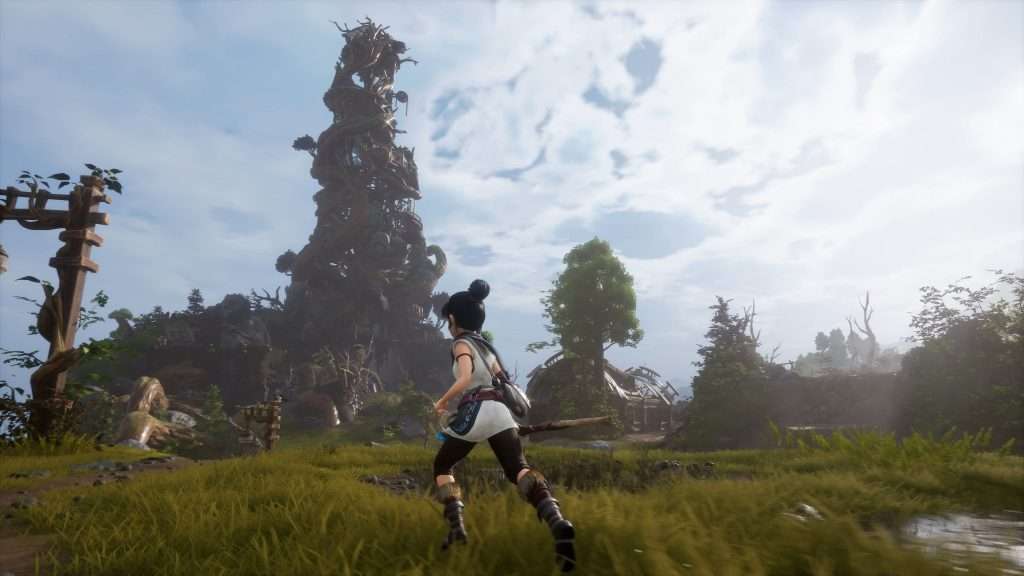 All that being said, given the games cross-platform availability on the PS4 as well as the PS5, visuals aren’t as cutting edge and truly ‘next gen’ looking as the likes of Rachet & Clank: Rift Apart but the Ember Lab team really has worked some magic with Epic’s Unreal Engine powering the games visuals. 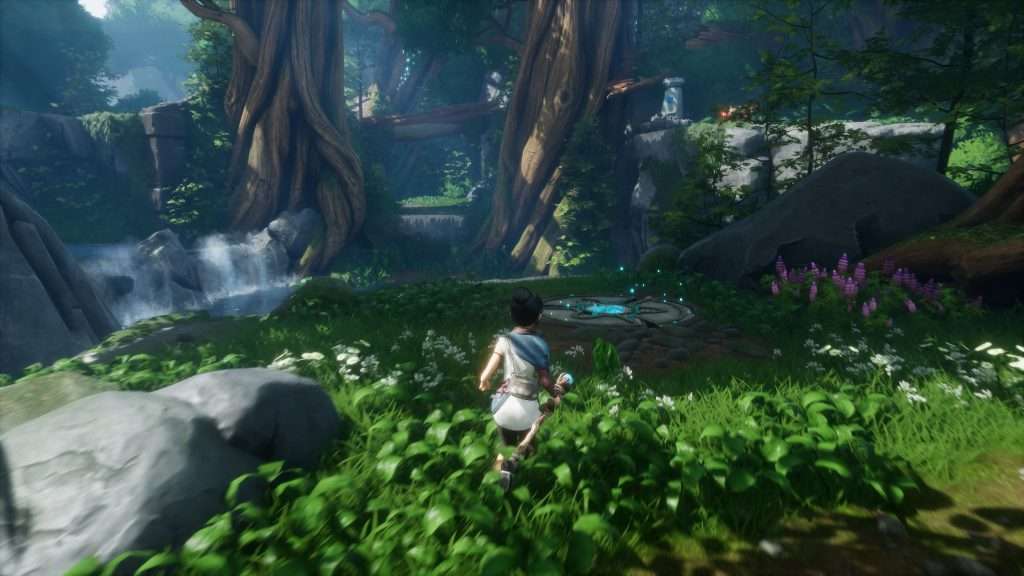 The soundtrack must also be commended. It’s been produced to an impressively high calibre and again, wouldn’t sound out of place in a AAA animation blockbuster. It reminded us of Horizon Zero Dawn a number of times which is a compliment, given how memorable that soundtrack was.

On top of the aforementioned resolution and frame rate options, the PS5 also allows for super fast loading times thanks to its SSD. Jumping into the game from a cold start took less than 7 seconds which is fantastic.

The DualSense implementation is also really nicely done with try adaptive triggers delivering greater levels of resistance the harder you pull on your bow. The haptic feedback also offers an even greater level of immersion when exploring the world and taken on foes.

Now, it must be noted, Kena: Bridge of Spirits isn’t a long game. It also won’t set you back the full €80 other AAA releases on the PS5 are charging but that’s because, overall, it’s definitely not as big and robust as those titles so don’t expect to be clocking in 80 hours on this game.

The game costs just €39.99 or €49.99 if you go for the Digital Deluxe edition which adds a few additional cosmetic items along with a digital version of the fantastic soundtrack. Thankfully, even that low €40 price tag will give you access to both the PS4 and PS5 version of the title, which is great to see.

We finished our playthrough in about 14 or so hours so a much more compact experience which was actually quite refreshing having come form recent time sinks such as Assassin’s Creed Valhalla and Marvel’s Avengers and all the additional DLC.

Kena: Bridge of Spirits is a fantastic first outing for Ember Lab and they’ve created something truly special for gamers with remarkable character and world design, combat and an overall well polished title.

Kena: Bridge of Spirits is a fantastic first outing for Ember Lab and they’ve created something truly special for gamers with remarkable character and world design, combat and an overall well polished title.