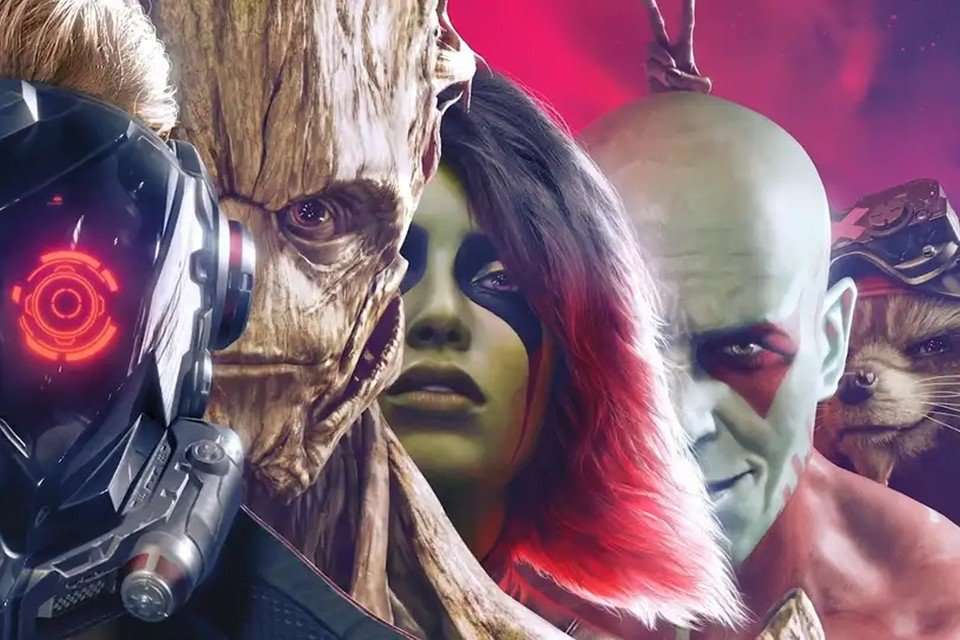 John Reilly November 8, 2021
New story, fresh gameplay and pure cosmic-comedy. The Guardians of the Galaxy video game has arrived and it’s a welcome addition to the franchise. With the hype of the third film on the way (scheduled for a 2023 release), Guardians of the Galaxy the game had a lot to live up to. It’s worth noting first off, this game is not connected to or related to the MCU movies. While there are familiar characters and I’m almost certain inspiration has been drawn from the MCU, Guardians of the Galaxy the video game stands alone.
Many would be quick to compare Guardians of the Galaxy to the Marvel’s Avengers game. Yes, there are similarities in some ways — they were both developed by the same studio, but the games are substantially different experiences. If anything, Guardians is bigger and better in every way. Terrific storyline, vast worlds to explore, satisfying combat, hilarious dialogue and outstanding visuals.
The single player action-adventure game sees the player take control of Star-Lord himself, aka Peter Quill, as the lead protagonist. While it was disappointing at first to realise I wasn’t able to take control of the other Guardians, I was soon to realise the interactions you do have work a treat. While you do only play as the one character, it certainly doesn’t feel that way. 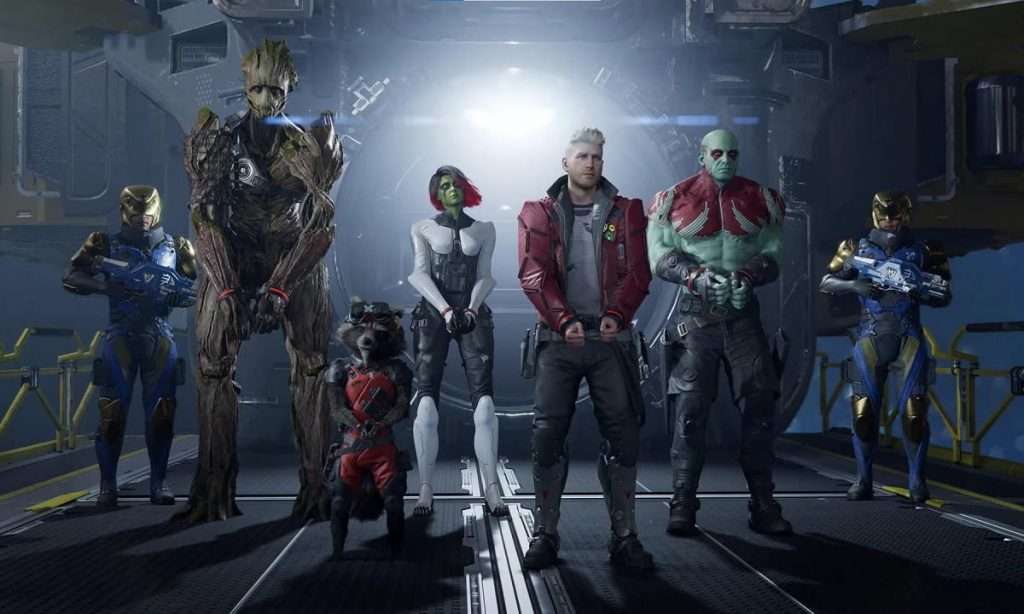 The game begins inside the world of 13-year-old Peter — before space, before the events that shaped who he is today. Looking from behind Peter’s eyes, you sit on a bed in his teenage room reading the latest music record cover from the band Star-Lord.  Once you’re up and out of bed the game changes from first to third person, exploring Peter’s room, guitars, old magazine and video game consoles. There are posters on the walls, all accurate depictions of all things ’80s and retro.  But leaving the room (very minor spoilers ahead) you realise it was but a dream and you’re staring into the eyes of fellow Guardian and all round loose unit Drax the Destroyer. 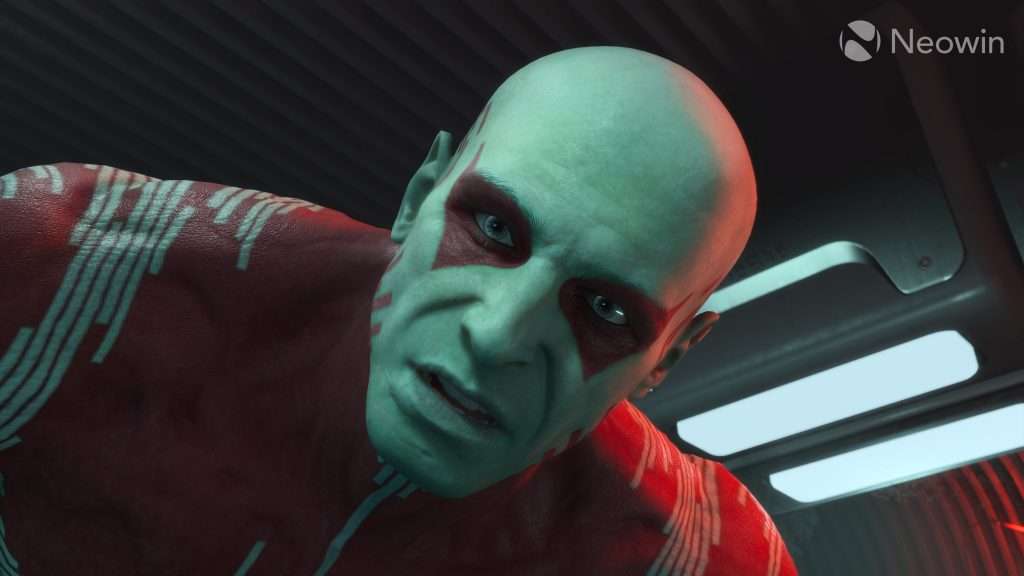 Your spaceship, the Milano, is fully explorable in game, as well as many of the universe’s locations you visit. On your ship there are plenty of things to interact with, visit other Guardians quarters, check out Rocket’s workspace, take a seat in the captain’s chair and fly across the galaxy — everything is highly detailed and interactive. 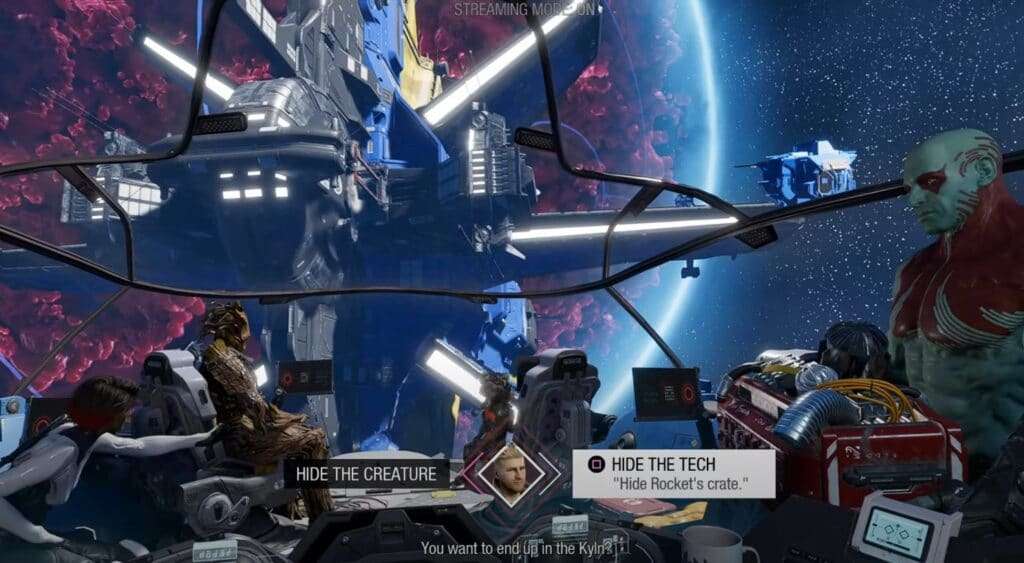 The game’s story is a step above the rest. When it was on, it was on. And when it slowed down it never came to a halt. Every moment of the story was enjoyable and if the main script wasn’t enough for you there were always more ways to get more from the characters. While on a mission the characters talk among themselves, every so often you’re given the option to respond as Peter Quill to any comments or questions the Guardians may have. When choosing what to reply, be sure to pick carefully. Your responses will have an impact, albeit small, on the story going forward.

Sticking true to the Guardian’s foundation, the characters are very funny, sarcastic, argumentative and obnoxious. During one battle Star-Lord yells out to tell you there’s an enemy coming, “big guy 12 o’clock.” Drax replies dead-pan: “Current time is irrelevant.” Straying off the linear path to find resources, or explore rooms or other areas triggers character dialogue to steer you back in the right direction. While they’re not the actors or even their likeness from the MCU films, their portrayal has similarities.

Combat is chaotic, but in the best way possible.  All of the Guardians of the Galaxy fight alongside each other, and while Star-Lord is the only playable character, you can still utilise the other Guardians’ special abilities.  During combat you can select the other Guardians and direct them to attack certain enemies and use their abilities. These are all selectable by holding down LB and pressing either, A, B, X or Y. Thankfully, for the purpose of learning to play, the move set is a slow build. Later in the game, once you’ve unlocked more abilities and move sets, the buttons to select certain moves can look overwhelming — but by that point the game presumes you’ve already learned how to best control and manage a fight. 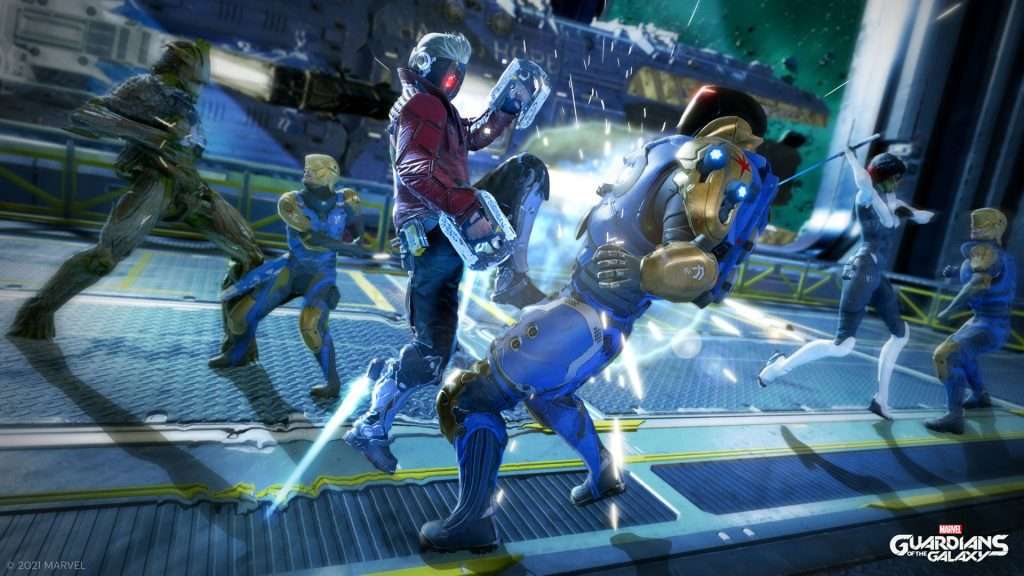 There’s moments in battle where you can tell your team to interact with objects to assist in the fight, for example you may send Drax to lift an explosive barrel to hurl at the enemy. In terms of a HUD (heads up display), there’s no permanent on screen text or icons. If you want to see where your objective is located you’ll need to put on Star-Lord’s visor. This visor also allows Star-Lord to scan the area around him and find important objects to interact with. 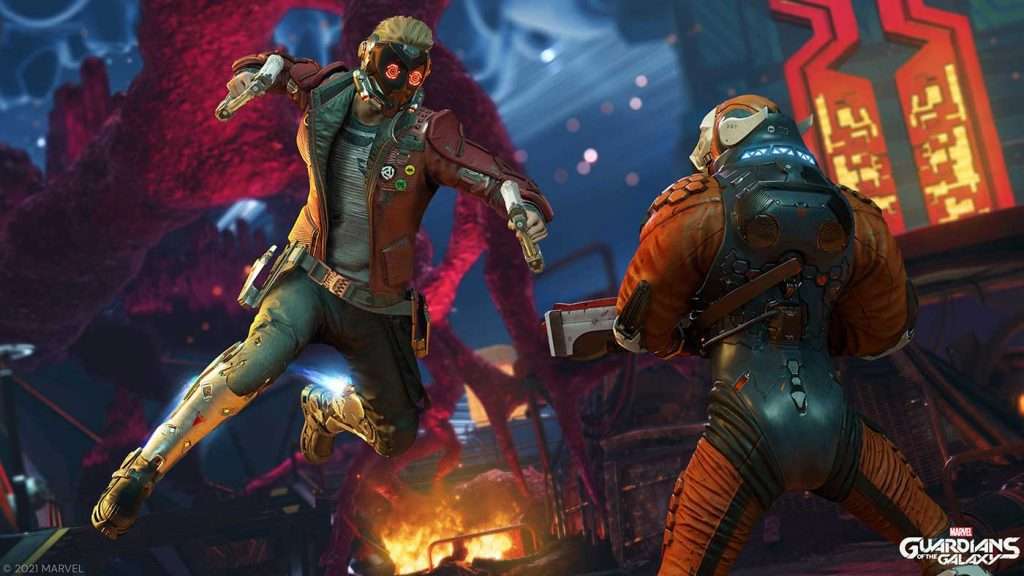 The character designs are sharp and defined, and the lighting truly brings out the beauty of these worlds. Speaking of which, most impressive of all are the various worlds in the game. The design of the ships, planets, and monsters brought out everything possible for the universe of the Guardians. The style is impeccable. The environments, in particular, are so vibrant and detailed that they look like they could have been plucked out of a Guardians of the Galaxy film. 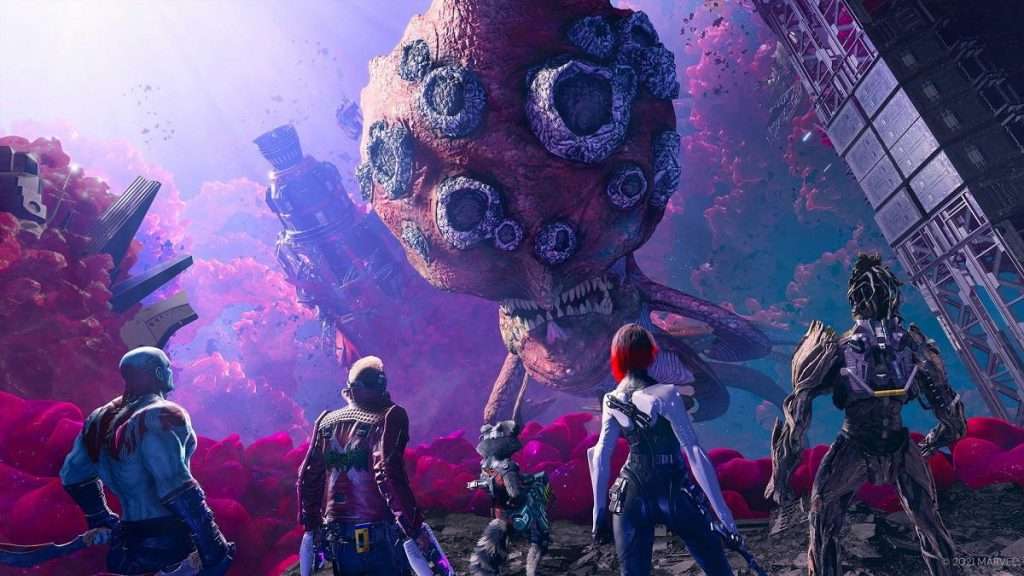 A photo mode can be activated at any time by pushing both the thumb sticks in at the same time. Typically with most modern photo modes, there’s camera control, filters and depth perception. Guardians comes with the addition of a multi-character pose selection to get all the guardians ready to say “cheese”.

The game’s soundtrack is a standout, with so many incredible hits from the ’80s — KISS, Iron Maiden, Rick Astley, Blondie all on show. An entire album was also written specifically for the game by the fictional metal band Star-Lord. Music plays a key role throughout the game, both on the battlefield and during exploration. This is despite music never playing a major role in the comic books. It wasn’t until director James Gunn brought the Guardians to life that music entered the picture. It was a decision that’s been welcomed by MCU, comic book and gaming fans alike. 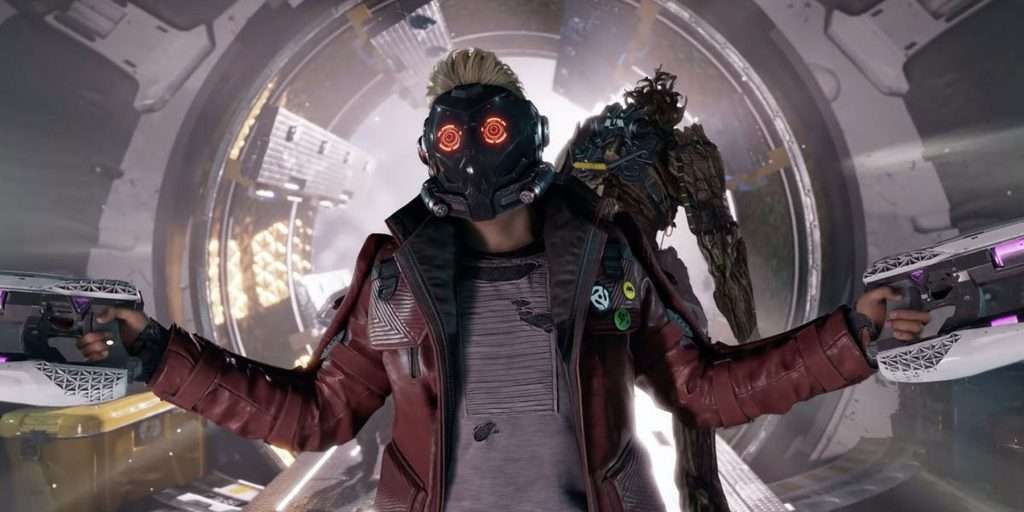 Guardians of the Galaxy is filled with heartfelt moments, surprises, quirkiness and joy — it’s one of the best games of 2021.  It features a brilliant story set in a wondrous universe. The studio that brought it to life, Eidos-Montréal, has not just given the characters and story justice, they’ve built a world and a game that stays true to the MCU and brings the comics alive.

Guardians of the Galaxy is available now from €59.99 on PC, PlayStation 4 and 5, Xbox One and Xbox Series X|S as well as Nintendo Switch via cloud service. 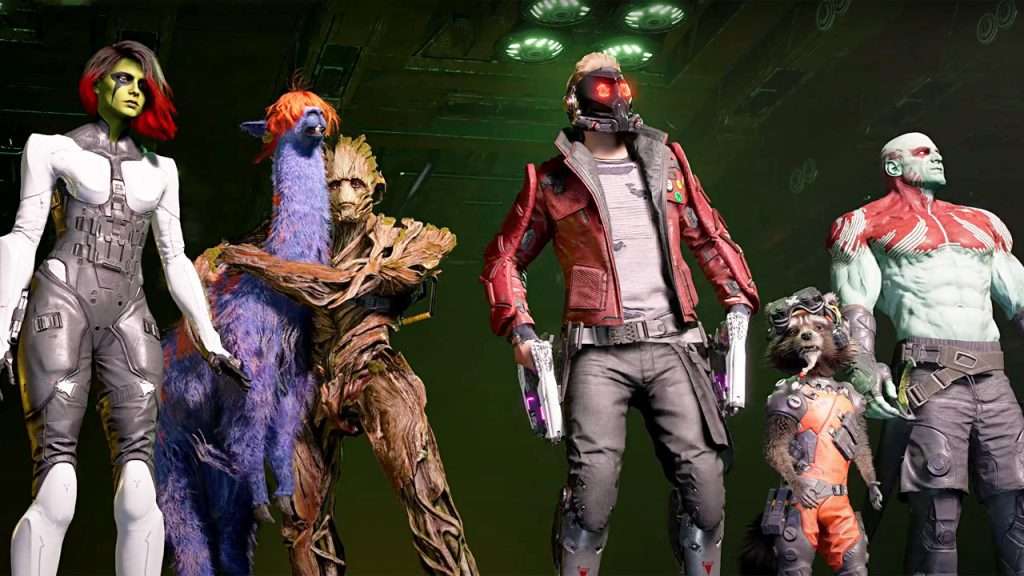 REVIEW: Marvel's Guardians of the Galaxy

Guardians of the Galaxy is filled with heartfelt moments, surprises, quirkiness and joy — it’s one of the best games of 2021.  It features a brilliant story set in a wondrous universe. The studio that brought it to life, Eidos-Montréal, has not just given the characters and story justice, they’ve built a world and a game that stays true to the MCU and brings the comics alive.