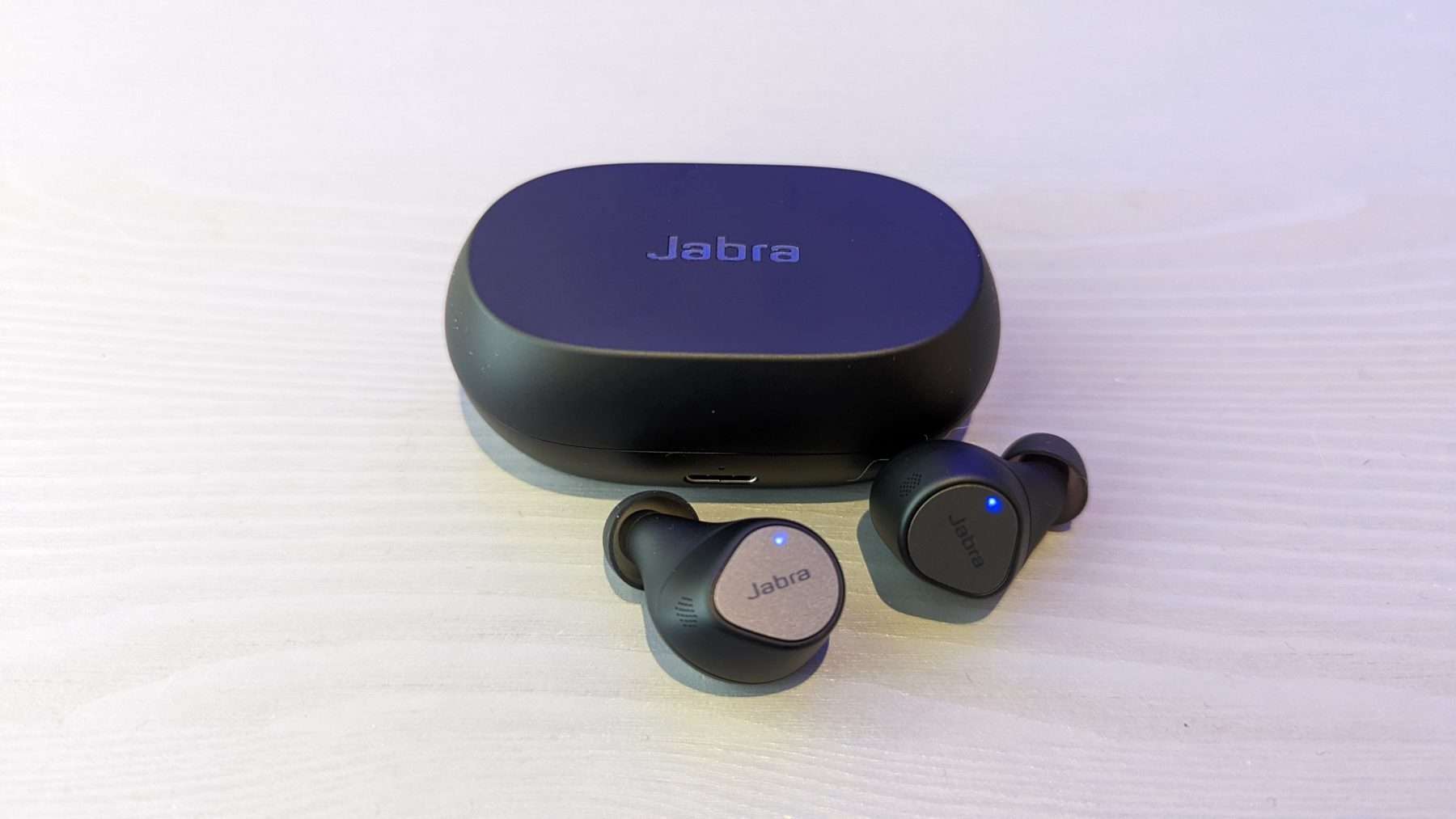 For frequent readers of our site, when it comes to Jabra, you’ll have noticed that I’ve always liked their earbud offerings, notably the Elite 75t and Elite 85t. So, as of late August, the company has decided to revamp their Elite lineup, and now, we’ve got the new Elite line up which includes the entry level Jabra Elite 3, and then the more premium Elite 7 Active and Elite 7 Pro instead of the Elite 95t. Do these new entries deliver what consumers have come to expect from Jabra’s prestigious Elite line up? Read on to find out in our review of the Jabra Elite 7 Pro. 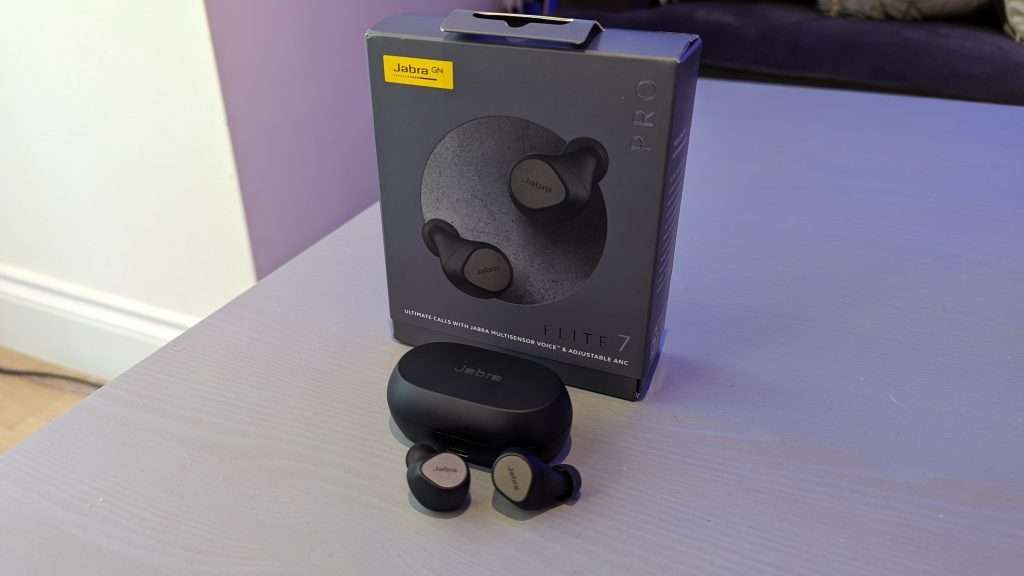 Let’s talk design first. I actually think the case design has taken a step back. The case is a new shape, slightly stouter and shorter than the other cases before it. Unfortunately, a pretty strange design flaw, for me at least, is that Jabra has put the USB-C charging port on the front of the case. It kind of goes against all my experience with true wireless earbuds. I’ve gotten into the habit of just feeling for the charging port with my fingers, before using my thumb on the opposite side to flip open the lid without having to look at the case. With these, I have to constantly remind myself that the lid flips open from the same side that the charging port is on. That aside, one thing good about the new stockier design is that it does sit very securely on surfaces and it’ll never topple over, unlike the 75t’s case. 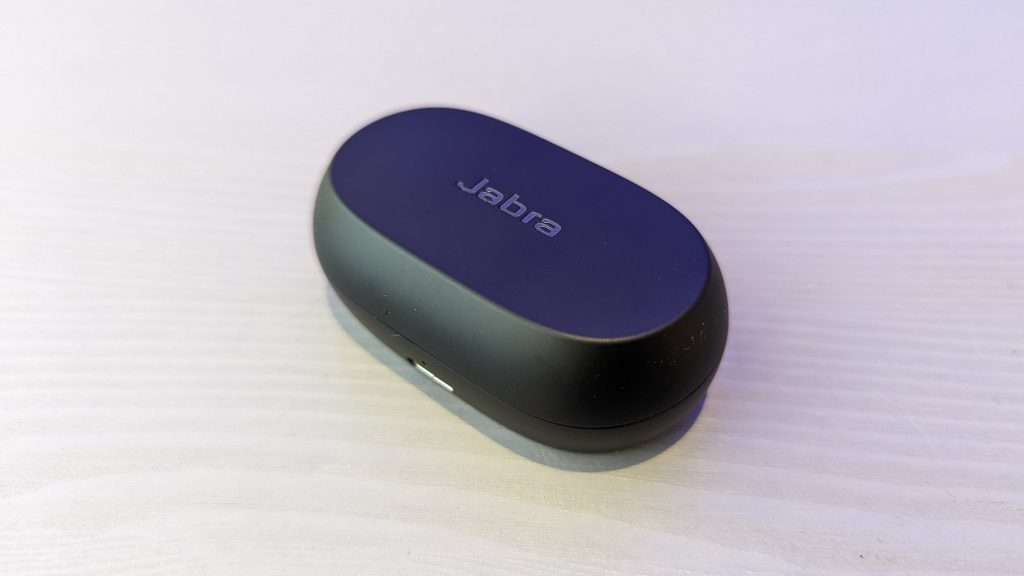 On the bottom, you’ll see the Qi symbol, which means Jabra has kept wireless charging on the Elite 7 Pro. Moving inside, you get a nice interior where the earbuds sit, with a rubberised coating, similar to the 75t’s. That being said, the magnets holding the earbuds in place seem to not be as strong on the Elite 7 Pro. Regardless, your earbuds won’t drop out if the lid is open, so that’s all that matters.

As for the earbuds, they still look distinctly Jabra. The company has kept a sort of teardrop shape design, and it’s still here with the Elite 7 Pro. The microphone grill is no longer as visible, since it’s been incorporated into the shell instead of the faceplate area. Jabra is keeping physical buttons on both earbuds, which is very nice. The colour of the faceplate area is also pretty consistent, although I’d say the Elite 7 Pro is a shade darker and more textured. 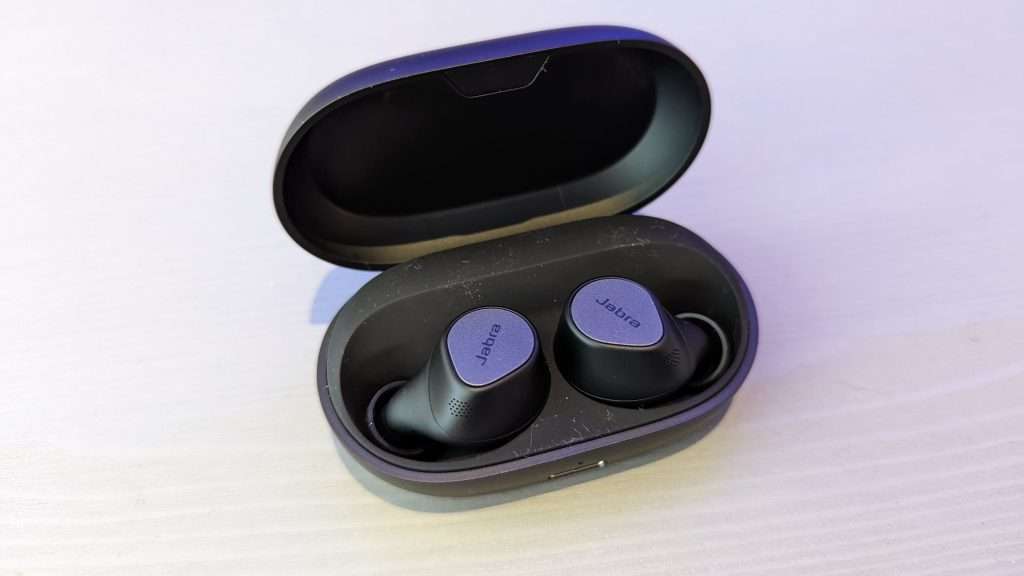 One of Jabra’s big selling points for the true wireless range is that they’re super comfortable since Jabra has done tens of thousands of ear scans to find the optimal shape. And yes, the Elite 7 Pro are really comfortable to use for long periods of time. The company has gone away from the semi-open design they introduced with the Elite 85t, which I’m super thankful for, and the earbuds are just really secure and comfortable in the ear. I think it also looks very elegant in the ear, not at all like some other earbuds that stick out or draw a lot of attention, so that’s nice. The passive noise isolation is also relatively decent, better than the Elite 75t I would say, and it’s also more comfortable in the ear.

There’s IP57 dust and water resistance so they’re actually pretty durable. With the in-app registration, you get a two-year warranty against failure from dust and water, which is a welcome bonus. I’d say these work perfectly fine for exercise and the likes, they’re really secure, but if you’re really worried about them staying in your ears, there’s the Elite 7 Active, which comes with Jabra’s ShakeGrip technology, which is essentially a coating that’s supposed to help them stay even more securely in your ears.

Set Up & Using the Sound+ App

As for set up though, there’s quite a bit to be done when you first get these earbuds. Jabra’s Sound+ app is a must-download for these, because you get a bunch of personalisation features. There’s personalised ANC, a fit test, a sound personalisation test as well as a decent amount of customisation for controls.  I was a bit stumped by the personalised ANC though, because it’s literally just a slider that increases or decreases the strength of the ANC, as well as a left/right audio balance slider. When it’s called ‘Personalised ANC’, I would expect an automatic test or automatic adjustment, not just adjustable ANC. I did notice quite a bit of hiss when ANC is turned on and no music is playing though, although this will differ based on your ears’ sensitivity. We’ll talk about ANC effectiveness later, let’s move on to the other features first.

The fit test is pretty standard, some sounds play and the app tells you if the fit is good or not. If it’s not good, try adjusting the earbuds in your ear or different tips. MySound is the sound personalisation, and it’s basically a series of beeps being played and you’re required to tap the screen whenever you hear a beep. I recommend doing this in a really quiet room.

As for controls, you can change what single, double and triple taps do on each side. A long press and hold on either side raises and lowers the volume and that’s fixed, but I’m glad Jabra has included volume control. There are also different options for incoming calls and active calls, with the ability to mute yourself or put an active call on hold through button presses, which is definitely handy for people who make a lot of calls regularly. I know a lot of people don’t really like physical buttons because they end up with earbuds getting pushed into the ears when pressing the buttons, but these aren’t too bad.

Software-wise, nothing much to report, except that the first software update I did took forever. I think it took like 35 minutes to update the earbuds, so give it some time. Of course, on the main screen, you get the battery levels for each individual earbud as well as the case, a quick toggle between ANC, HearThrough and off, as well as an EQ feature with six different presets. Now, it’s a five-bar EQ, which is relatively simple, and I did keep the EQ turned off most of the time when I was testing, but I personally think the Smooth preset was one of the better ones.

Sound quality is pretty decent. You still get that emphasis and thump with the bass, but it feels slightly toned down compared to the 75t and not quite as textured and detailed as what you get out of other earbuds like the Sennheiser Momentum True Wireless 2. Mids are pretty balanced and not too overwhelmed by the bass, although certain tracks do tend to result in slightly recessed mids. Treble is okay, it’s relatively bright although I think there could be a bit more detail here.

Soundstage is about as good as you can get out of a pair of true wireless earbuds, but I’d say separation and accuracy are actually pretty good, especially if you listen to songs with plenty of vocal layering. 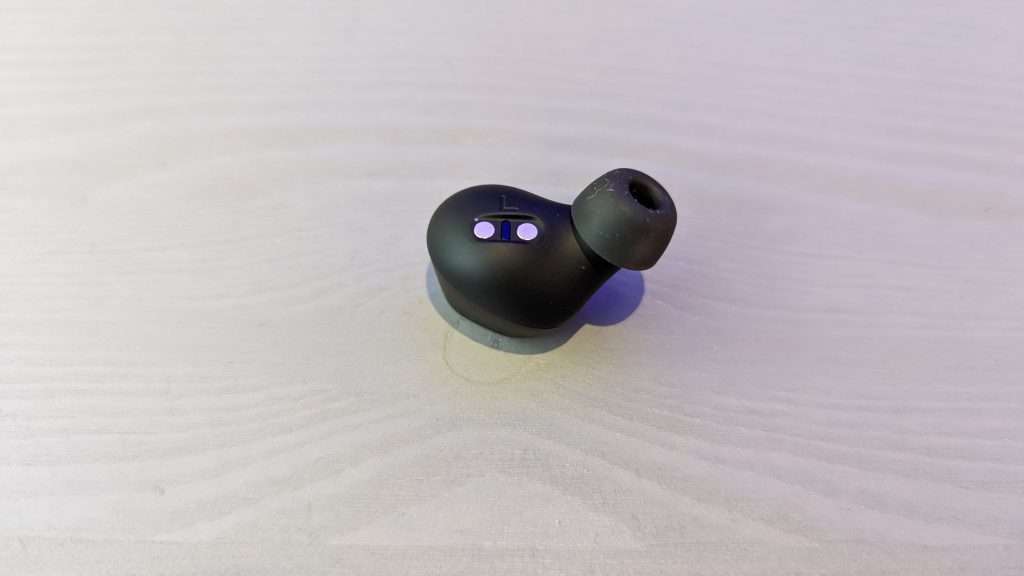 So we come back to ANC, and it’s well, just passable. You get a reduction in low pitched noises but the earbuds don’t do as effectively with higher-pitched noises like voices and such. Definitely nowhere as good as the likes of what Sennheiser or Master & Dynamic are offering, but still relatively decent. These come with Bluetooth 5.2, which is excellent, but the codec support is where it gets odd again. These have SBC and AAC support, but not aptX. The funny thing is that the “budget” Elite 3 earbuds that are less than half the price of the Elite 7 Pro come with aptX, so I’m really not sure why this is the case, but yeah, a bit of a disappointment.

Adding to that, you are able to use the earbuds individually, but multipoint connectivity is missing on these. I have reached out to Jabra’s PR agency in relation to this and here is their response: “Multi connect, a Jabra feature appreciated by millions of Elite users worldwide, will be coming to the Elite 7 Pro in a firmware release. Jabra can confirm that this will be available in January 2022. Jabra needed a little extra time to ensure they could bring this experience in a more sleek and advanced form factor than ever before.”

As for microphone quality for calls, Jabra’s done a very good job here. There are four microphones, and they’re paired with Voice Pick Up sensors, which automatically activates in windy situations and use bone conduction for very clear voice calls. Now, I’m not sure if it’ll activate in my apartment when taking calls whilst working from home but people I have spoken to said my voice was clear and they didn’t have any problems at all with understanding me.

Moving on, battery life is good, Jabra claims eight hours on the earbuds, and I got around 7 and a half hours or so with ANC supposedly tuned to the max. There’s supposed to be a total of 30 hours with the charging case, and there’s also quick charge, with five minutes of charge giving an hour of playback time, which is nice.

At €199, these are actually ever so slightly cheaper than the Elite 85t when they first came out. They’re pretty comfortable to wear for long periods and have a strong feature set. These are definitely a great earbuds to pick up if you need to do plenty of voice calls and you want a bit more bass in your music. But if you’re planning on using these for commuting and the likes, you’ll probably be a bit disappointed with the strength of the ANC.

The Jabra Elite 7 Pro are available at Harvey Norman for €199 in their grey/black colour option. 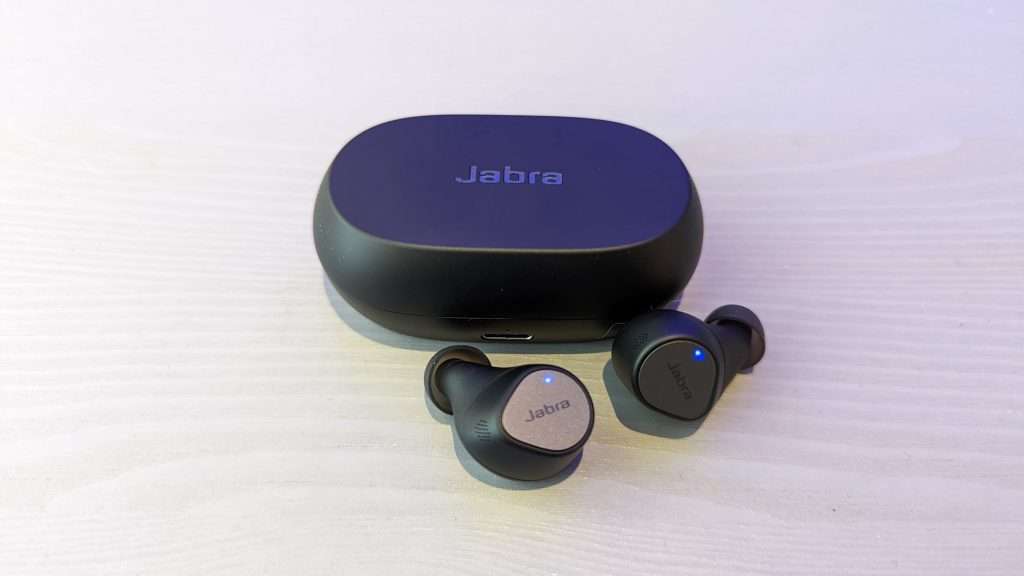 At €199, these are actually ever so slightly cheaper than the Elite 85t when they first came out. They’re pretty comfortable to wear for long periods and have a strong feature set. These are definitely a great earbuds to pick up if you need to do plenty of voice calls and you want a bit more bass in your music. But if you’re planning on using these for commuting and the likes, you’ll probably be a bit disappointed with the strength of the ANC.

Master & Dynamic is a New York-based premium audio company who started around the same time TheEffect.Net was set up.…