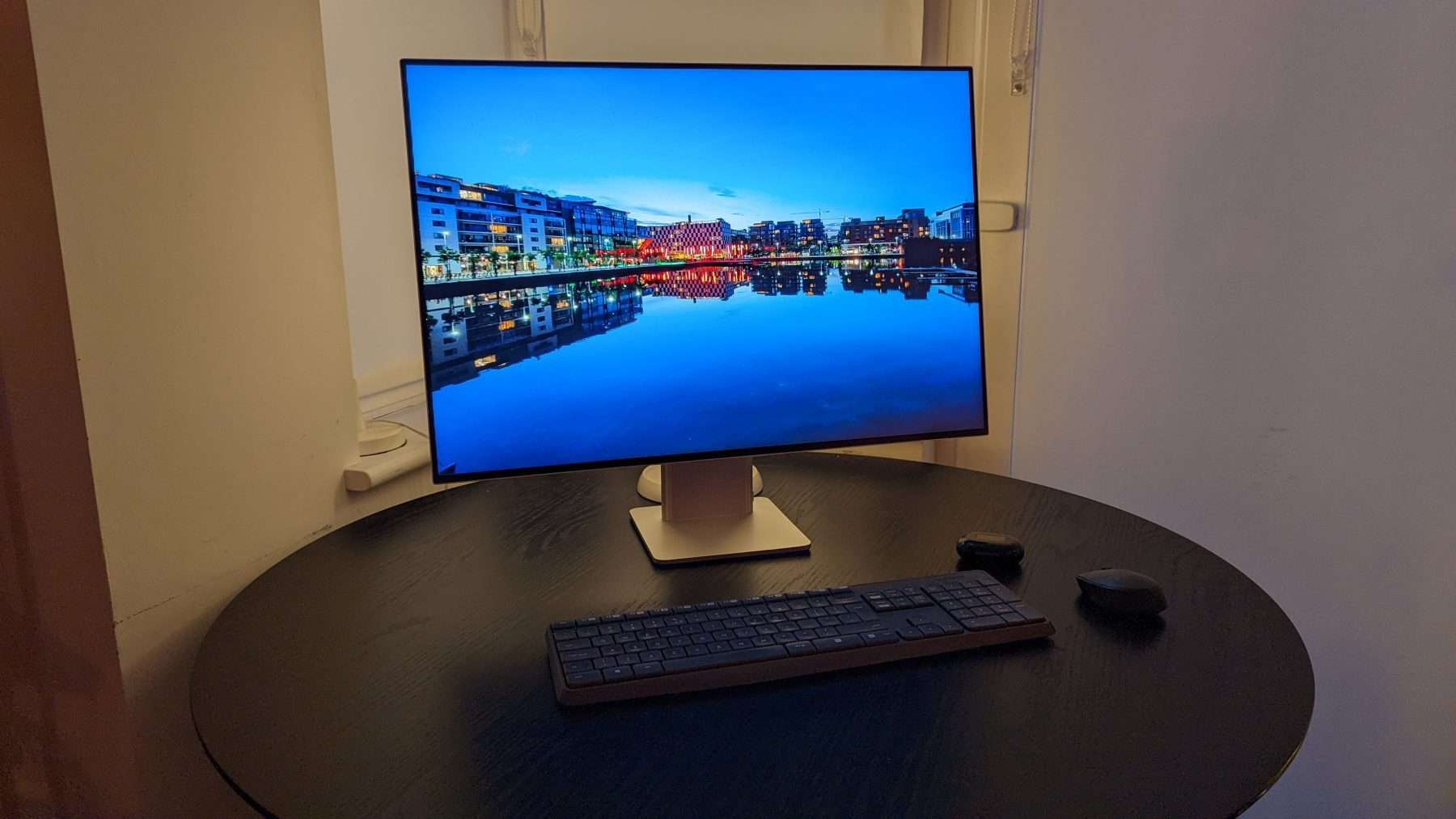 As we all know by now, decisions made by the US Government have prompted Huawei to diversify their offerings beyond merely issuing mid range to high end smartphones and the new 28″ Huawei MateView monitor is part of their diversification efforts. We’ve been using this very monitor for a few weeks now and here’s our Huawei MateView review where we put it through its paces.

The Huawei MateView monitor is a 28.2″ display that has a razor sharp 3,840 x 2,560 pixels resolution IPS LCD panel that’s also colour calibrated at the factory in order to offer 98% DCI-P3 colour space, VESA DisplayHDR 400 certification and a Delta E<2 for colour accuracy which will go a long way when it comes to appeasing content creators.

That’s not all, the Huawei MateView is also one of the rare monitors in the market with a tall 3:2 aspect ratio which makes it ideal for crunching paperwork. Unfortunately, the display itself isn’t exactly intended for gaming and the refresh rate is capped at 60Hz with no support for the usual NVIDIA GSync or AMD FreeSync to smooth out screen stuttering and tearing but it was never intended for that purpose and that’s what the Huawei MateView GT is for anyway.

In terms of design, the Huawei MateView is a slim, svelte and stylishly minimalist monitor with thin bezels all across that offer a 94% screen-to-body ratio.

The monitor itself is permanently mounted into a stand that offers some versatility in terms of adjustments that let you adjust it up and down by a few inches – specifically 110mm up and down – on a vertical axis and also tilt it slightly up and down by a few degrees from -5 to 18 degrees. Unfortunately, there’ s no left or right tilting or any way to mount it vertically. It also lacks VESA mounts so you’re only left with its built-in stand. 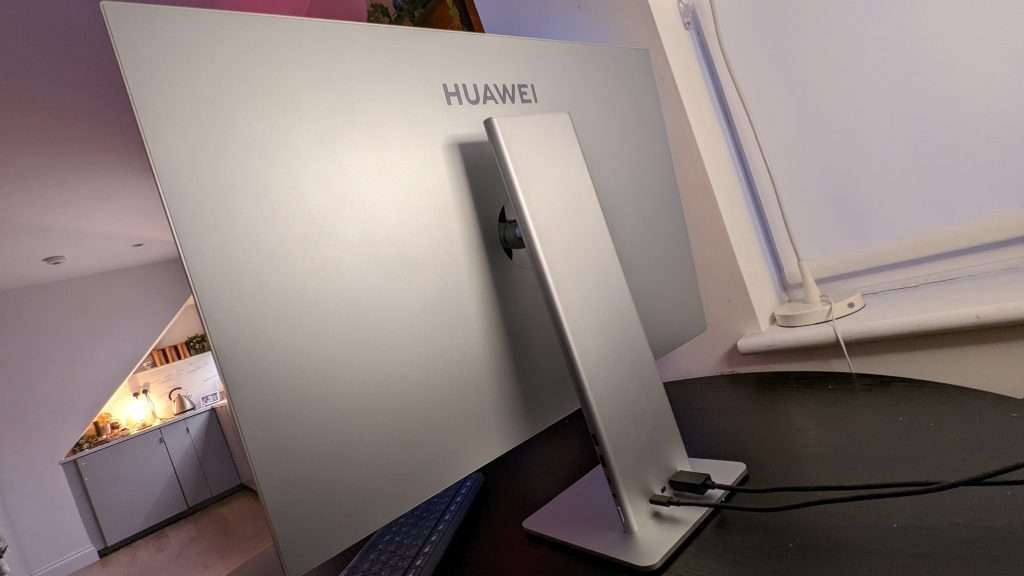 Overall build quality is excellent and the stand along with the back of the display are all finished in a brushed metal finish with the Huawei logo emblazoned on the back.

When viewed from the front, it has a wonderfully clean look that will fit in well with almost any office setup. In keeping with this minimalist aesthetic, the controls for the display is actually a touch sensitive smart bar at the base which requires a series of swipes and taps to navigate the menu. 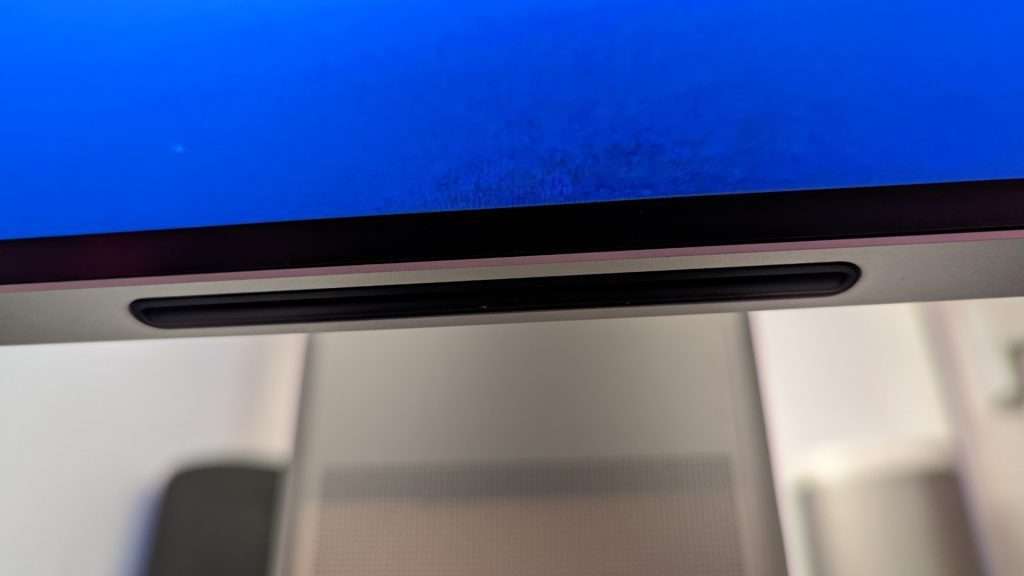 The base of the stand itself sports an NFC reader in order to interact with the display’s Desktop Mode which can be accessed with a compatible Huawei phone. Doing so triggers a virtual desktop in a fashion akin to Windows OS that you can interact with a mouse and keyboard. Seasoned users will also note that this also has a similarity to Samsung’s DeX mode. 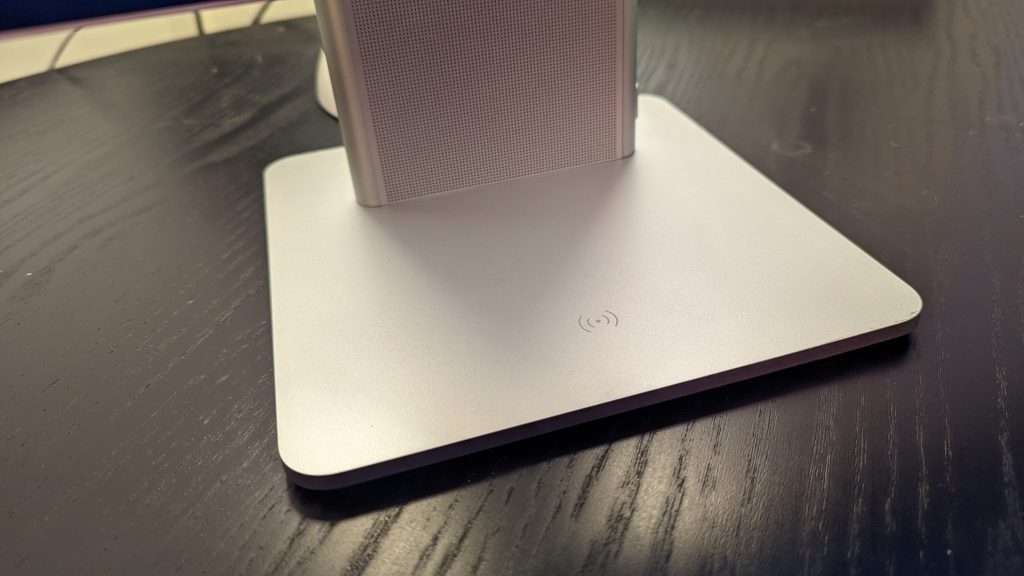 The side of the stand hosts a power button, a 3.5mm combo jack, a USB-C port for pairing up with other devices like laptops and phones that can also offer 65W charging for phones and laptops along with a pair of USB-A ports. 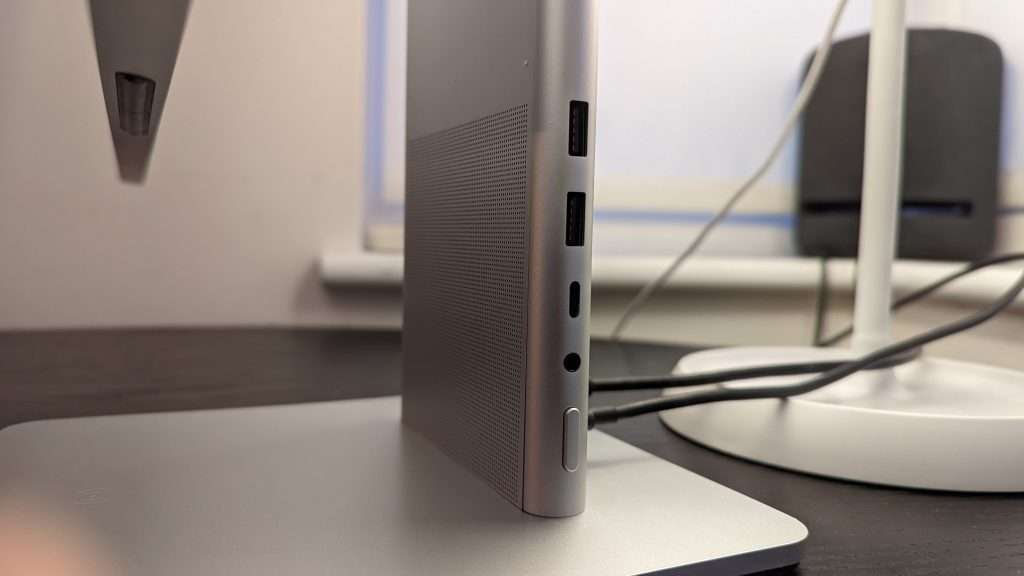 The rear of the stand hosts a USB-C port solely for powering the monitor, a HDMI 2.0 port and a Mini DisplayPort 2.0 port. The stand itself also has wireless display support too. Finally, the MateView also features a pair of 5W stereo speakers which are pretty impressive given their small encasement along with dual microphones too. 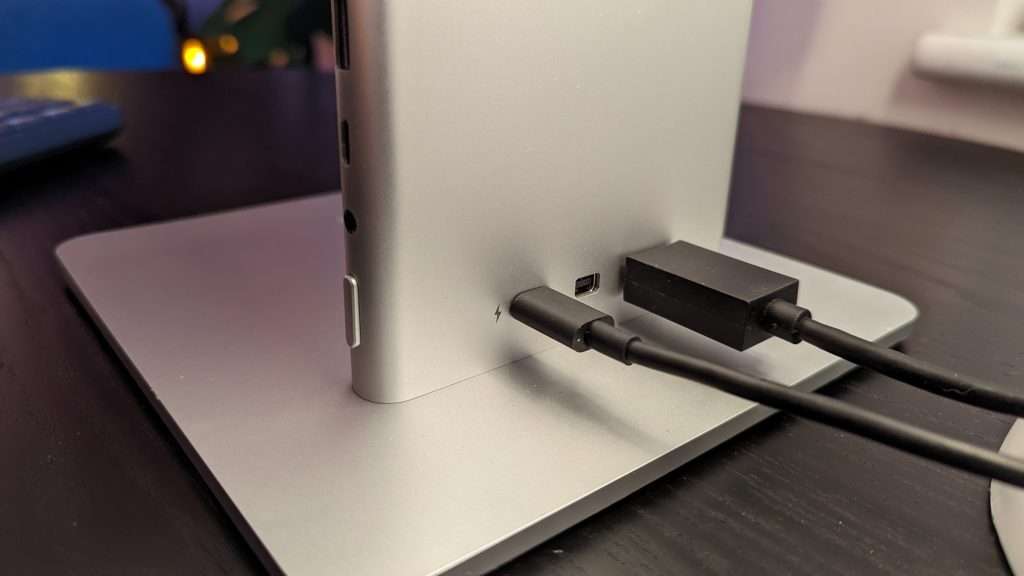 As you can imagine, setting the monitor up for use was pretty straight forward. The bottom mounted controls are easy to use with the ability to tweak brightness and contrast, sharpness and white balance and select inputs as well as controlling volume by sliding a finger back and forth and tapping the control bar. 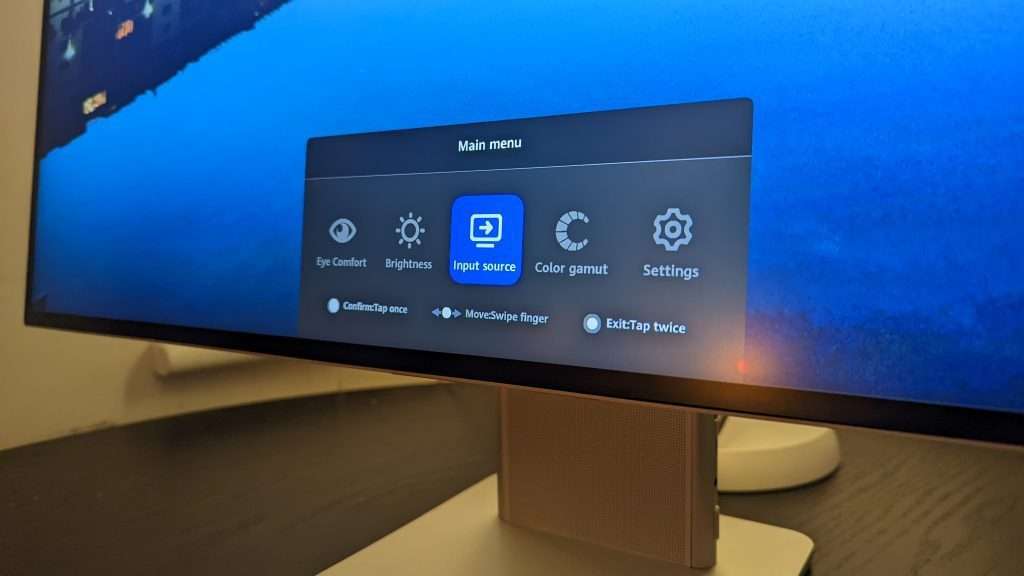 The biggest claim to fame for the Huawei MateView is its sheer variety of wired and wireless connectivity options. Collectively dubbed Huawei Share, this range of connectivity options lets you mirror the desktop of a Windows laptop on the MateView via a USB-C to USB-C cable or wireless via screen mirroring in up to 2K resolution. On top of the rear HDMI and mini DisplayPort 2.0, the side mounted USB-C port allows you physically to connect to a mirror compatible device too. 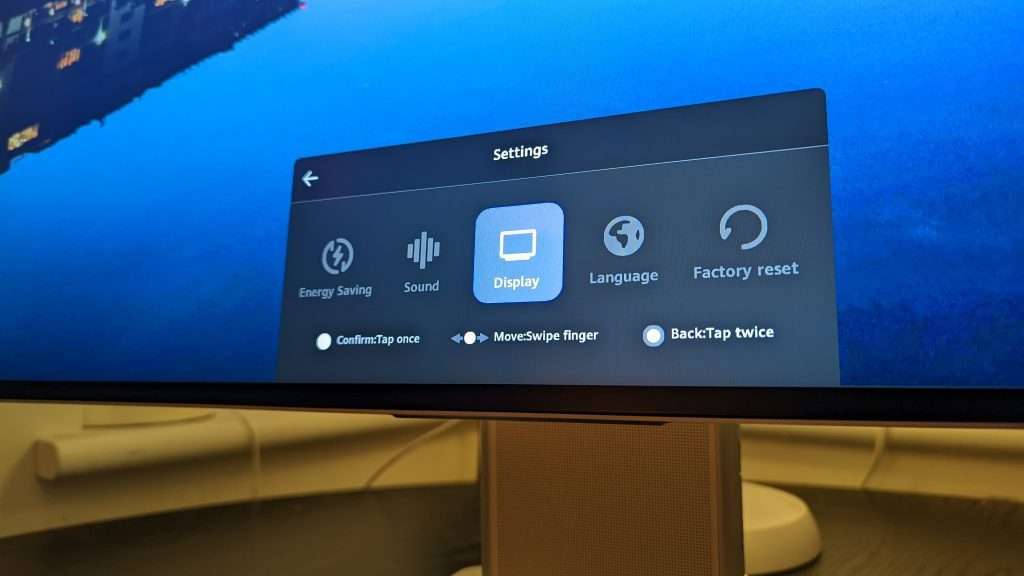 You can also take advantage of Huawei’s desktop mode for several of their phones and laptops like their Mate 30 Pro along with their recent MatePad Pro to project a virtual desktop menu. You can also use the phone or tablet as a touchpad but you get the best results by pairing up a keyboard and a mouse.

The actual display panel itself is top notch with beautiful colour reproduction and crisp detail when watching movies, editing videos and web browsing though the high gloss finish of the panel means some care needs to be taken when using it to avoid work lamps or overhead neon lights from causing glare.

The vertical 3:2 aspect ratio works in the MateView’s favour with the height making it easier to view vertically oriented documents and larger websites without having to scroll up and down. Unfortunately, it doesn’t work all that well for watching movies as there’s inevitable letterboxing with most 16:9 aspect ratio movies but that’s not a deal breaker. The provided speakers offer good volume but aren’t particularly detailed or offer significant bass.

The display also has an Eye Comfort mode with  TUV Rheinland’s vaunted Low Blue Light certification which filters out the dreaded blue light spectrum for easier viewing for extended periods of time.

The MateView is one of the few 4K displays in the market that have a work-optimised 3:2 aspect ratio. The colour calibrated display proves to be ideal for content creators but the modest 60Hz maximum refresh rate removes this as an ideal choice for gamers.

The easy connectivity, especially the wireless projection makes it a proposition for those looking to go cable free but it only sees its full potential if you’ve invested in the Huawei ecosystem with a Huawei phone, tablet or laptop. It’s well worth a look for those looking for a 4K 3:2 aspect ratio display purely for crunching paperwork, especially for those who own Huawei hardware.

The Huawei MateView 28″ Monitor can be picked up for €599 from Harvey Norman.

You can learn more about the monitor here. 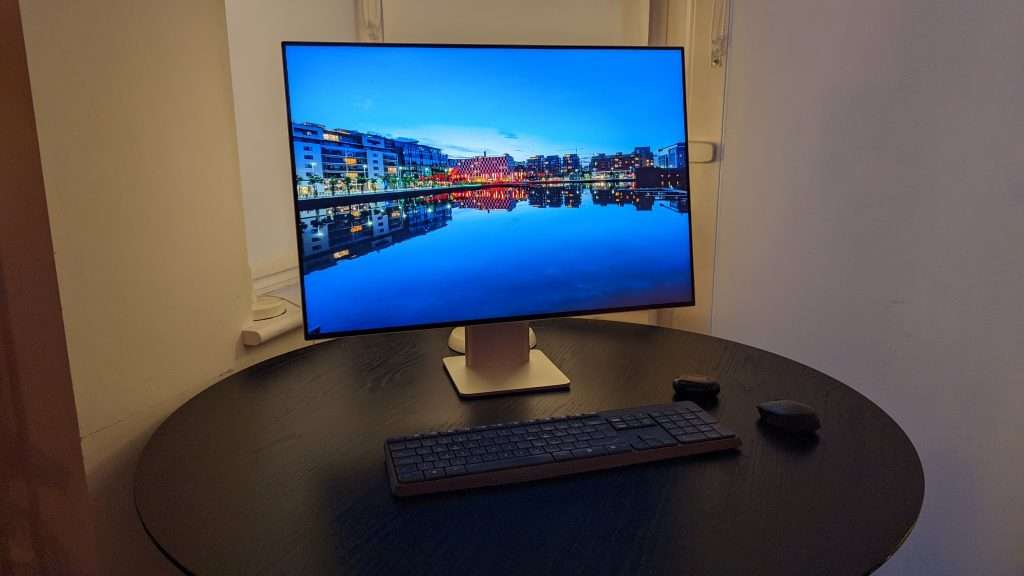 The MateView is one of the few 4K displays in the market that have a work-optimised 3:2 aspect ratio. The colour calibrated display proves to be ideal for content creators but the modest 60Hz maximum refresh rate removes this as an ideal choice for gamers. The easy connectivity, especially the wireless projection makes it a proposition for those looking to go cable free but it only sees its full potential if you’ve invested in the Huawei ecosystem with a Huawei phone, tablet or laptop. It’s well worth a look for those looking for a 4K 3:2 aspect ratio display purely for crunching paperwork, especially for those who own Huawei hardware.

Huawei has just wrapped up their virtual 'House of Huawei' event, live from Milan, and have announced a number of…

The Huawei Watch GT Runner smart watch should appeal to all runners, especially beginners. The question is whether they can…