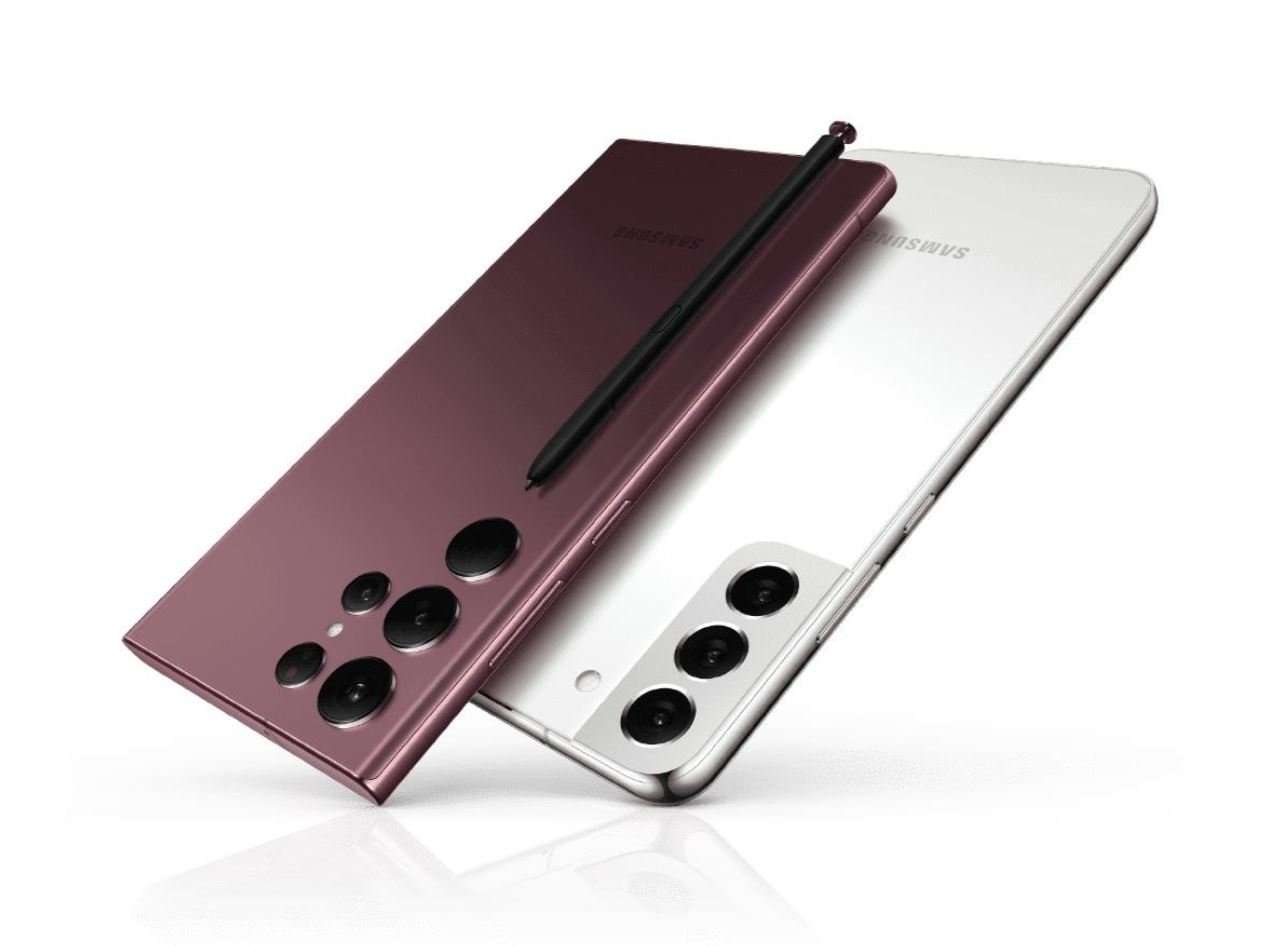 Samsung has officially unveiled their brand new S22 series of devices along with the latest in the line of their premium tablet range, the S8 series of tablets. For the launch event, Samsung even hosted it (in a way) in their very won metaverse via its virtual reality platform- Samsung 837X where they were enticing interested viewers to join with the chance to win ‘NFT prizes’ in its blockchain powered space. Metaverses aside, below are the key specs for each device along with their pricing and availability. 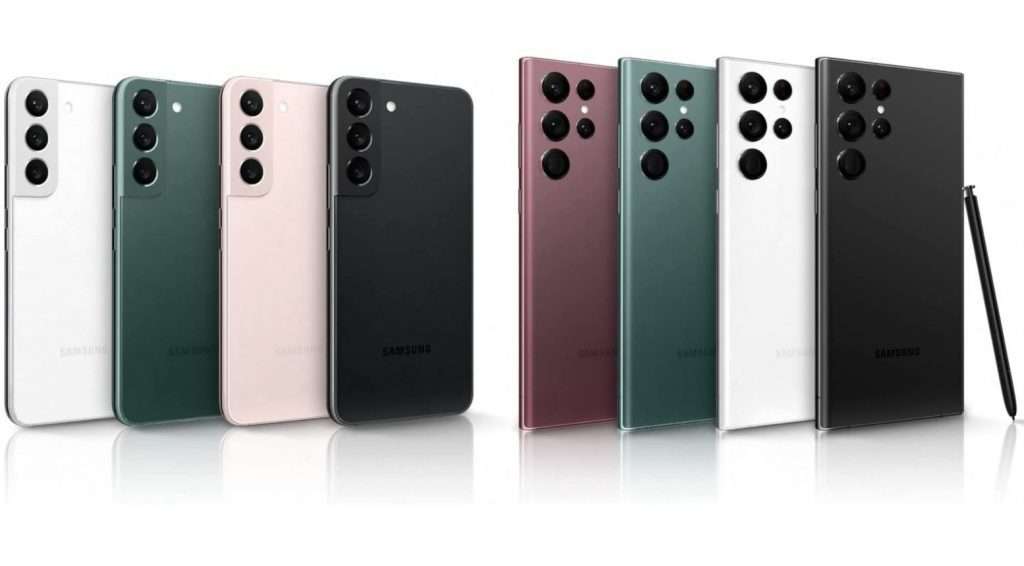 The complete lineup will be powered by the Exynos 2200 chipset, which will be paired with the company’s Xclipse GPU based on AMD’s RDNA 2 architecture.

One of the key features Samsung promoted was the upgraded low light capabilities of all three handsets, both for photos and videos captured with the devices.

As far as the charging is concerned, S22 and S22+ will get support for 25W fast charging, while the S22 Ultra will support 45W charging. 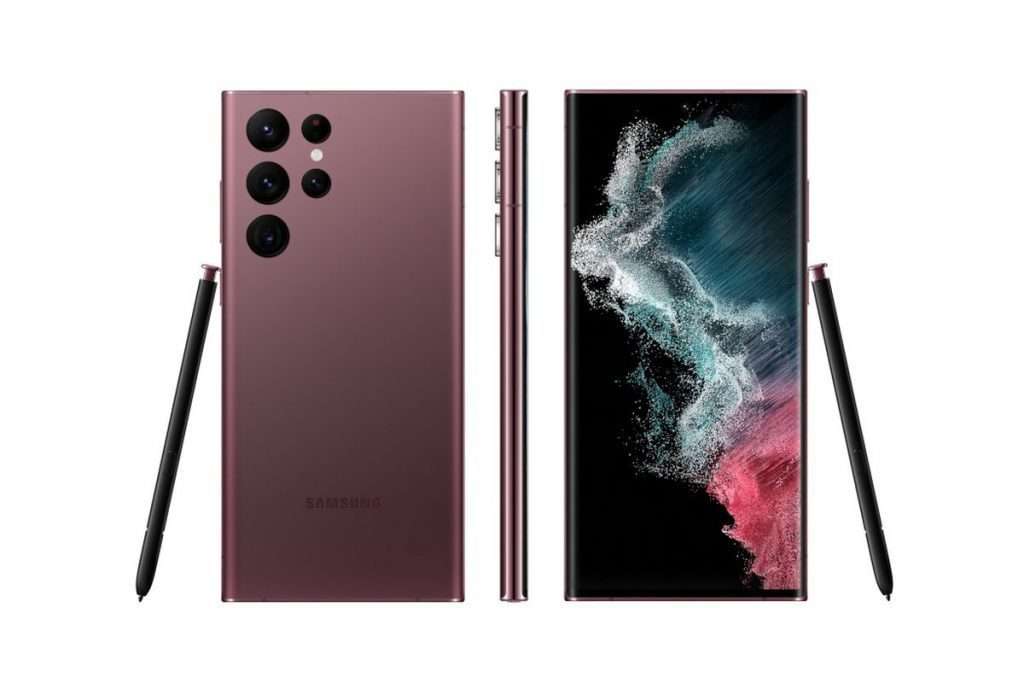 One major upgrade to the S22 Ultra in particular which fans of Samsung’s now-discontinued Note series is the inclusion of the S-Pen, stored inside the body of the device this time. Samsung has even managed to improved the feel of using the pen on the S22 Ultra with a much lower response time, thanks to some AI smarts prediction software which guesses where you’re going to draw next and helps fill in the gaps.

Samsung also surprised many viewers by updating its Android update policy for specific smartphones and stated that they will provide four years of Android operating system (OS) updates and five years of security updates for its devices. The South Korean company announced the extended software support for Galaxy S21 and Galaxy S22 series smartphones, along with Galaxy Z Flip 3, Galaxy Z Fold 3, and Galaxy Tab S8 at the event. 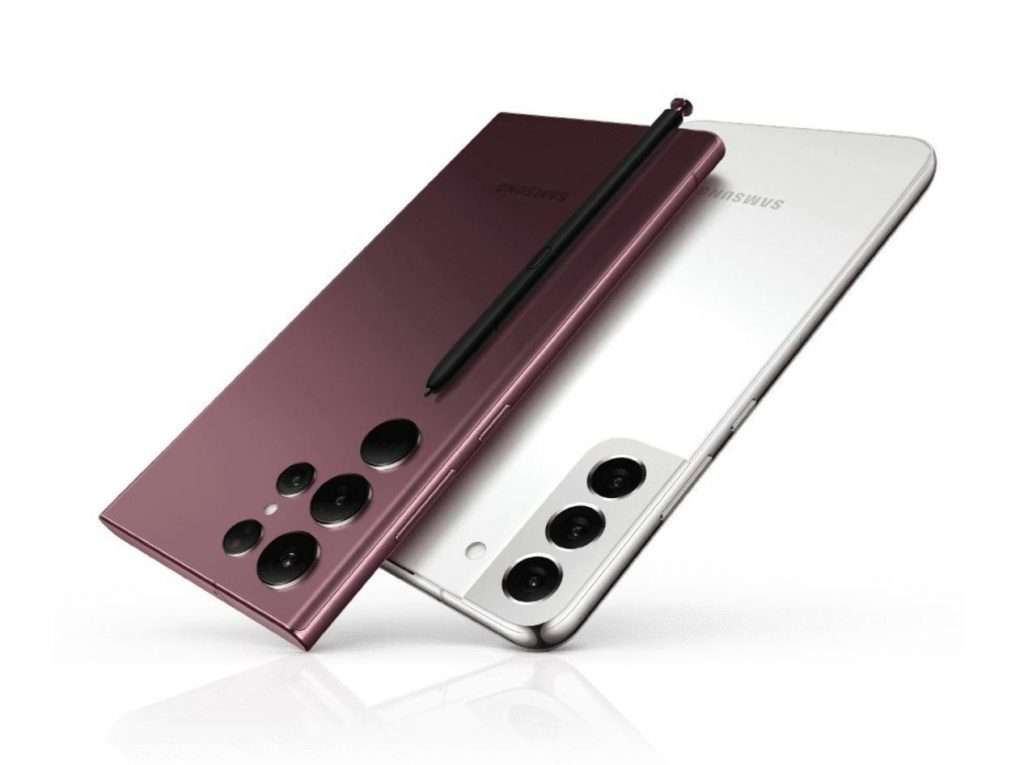 Below is a breakdown of each of the price point for each variant of the newly announced handsets with pre-orders open today.

The new Galaxy Tab S8 series will be made up of three models including a new super-sized ‘Ultra’ model. They’ll also be the first tablets to use the new Snapdragon 8 Gen 1 chip from Qualcomm along with other powerful hardware. 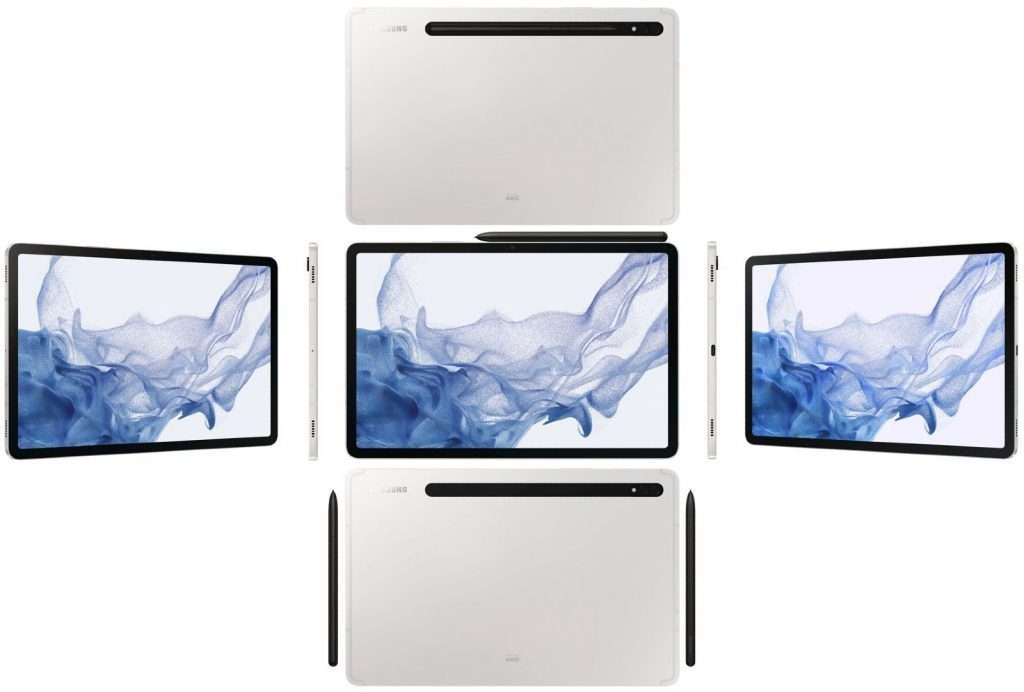 Both the Galaxy Tab S8 and Tab S8+ have a dual-camera setup on the rear with a 13MP primary camera and 6MP ultrawide. There’s also a 12MP front-facing camera primarily used as a webcam. It will apparently also support facial recognition, but the fingerprint sensors on either device will surely be more secure. 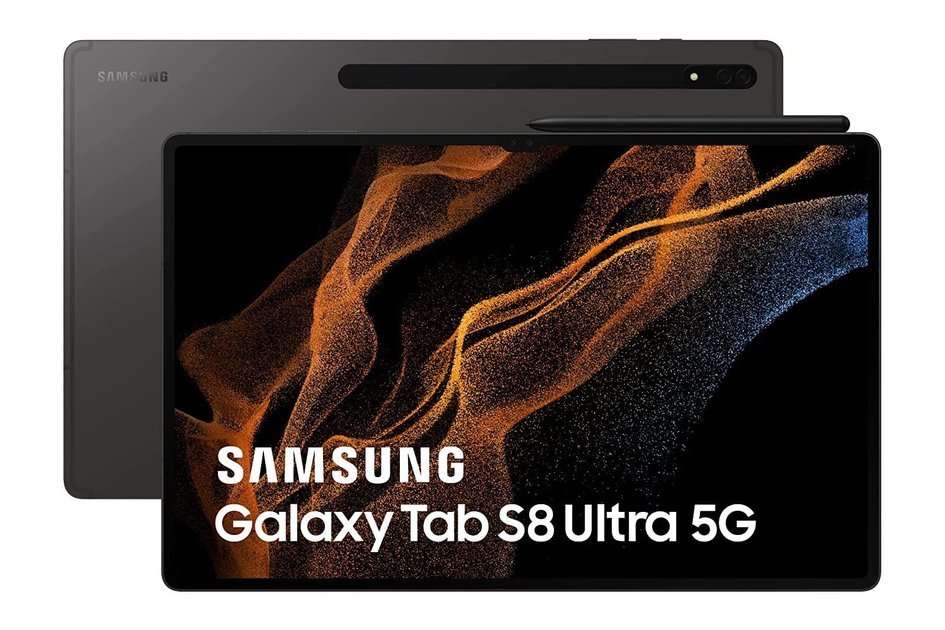 Finally, there’s the flagship device of the tablet line up, the Galaxy Tab S8 Ultra, which holds nothing back on the spec sheet. This truly massive tablet houses a 14.6-inch AMOLED display at 2960×1848 with a 120Hz refresh rate. It also offers 512GB of onboard storage as its top tier instead of 256GB, and can optionally have twice the RAM at 16GB. The other notable differences include the even-thinner dimensions at 208.6 x 326.4 x 5.5mm and the bigger battery at 11,200 mAh. There’s also a pair of 12MP cameras on the front of the tablet housed in a notch, presumably used for stronger face authentication along with support for a fingerprint sensor. 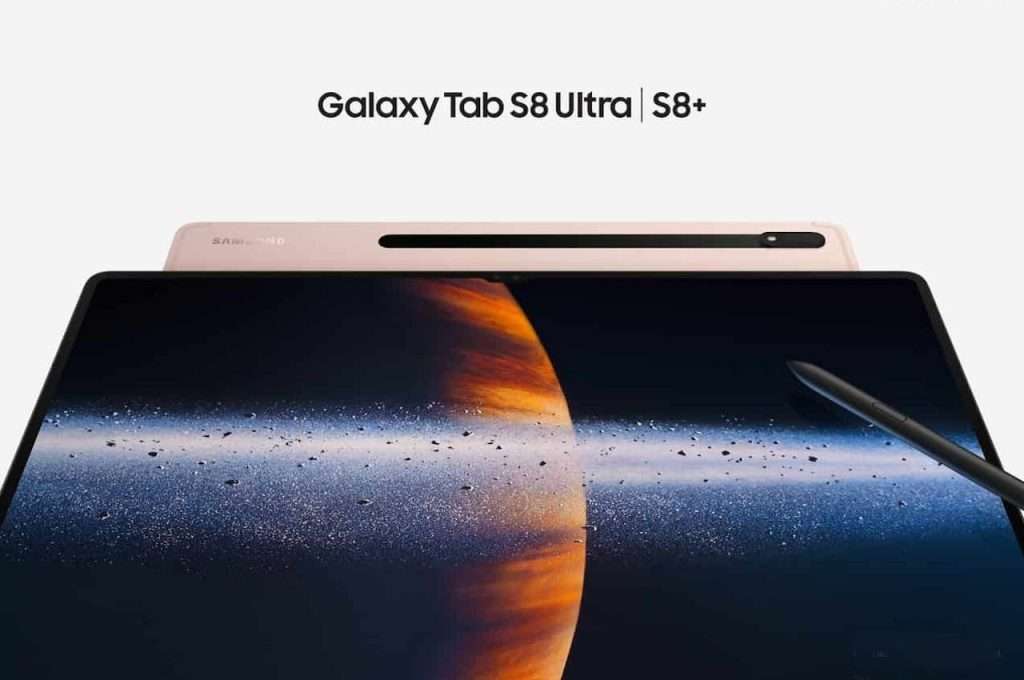 There is a quad speaker set up on each of the 3 new tablets with Dolby Atmos support.

Finally, all 3 devices come with their own S-Pen but, unfortunately, there’ll be no charger in the box, similar to more recent device launches from Samsung.

Below is a breakdown of each of the price point for each variant of the newly announced handsets with pre-orders open today.

You can learn more about each of the newly announced devices at Samsung.ie.