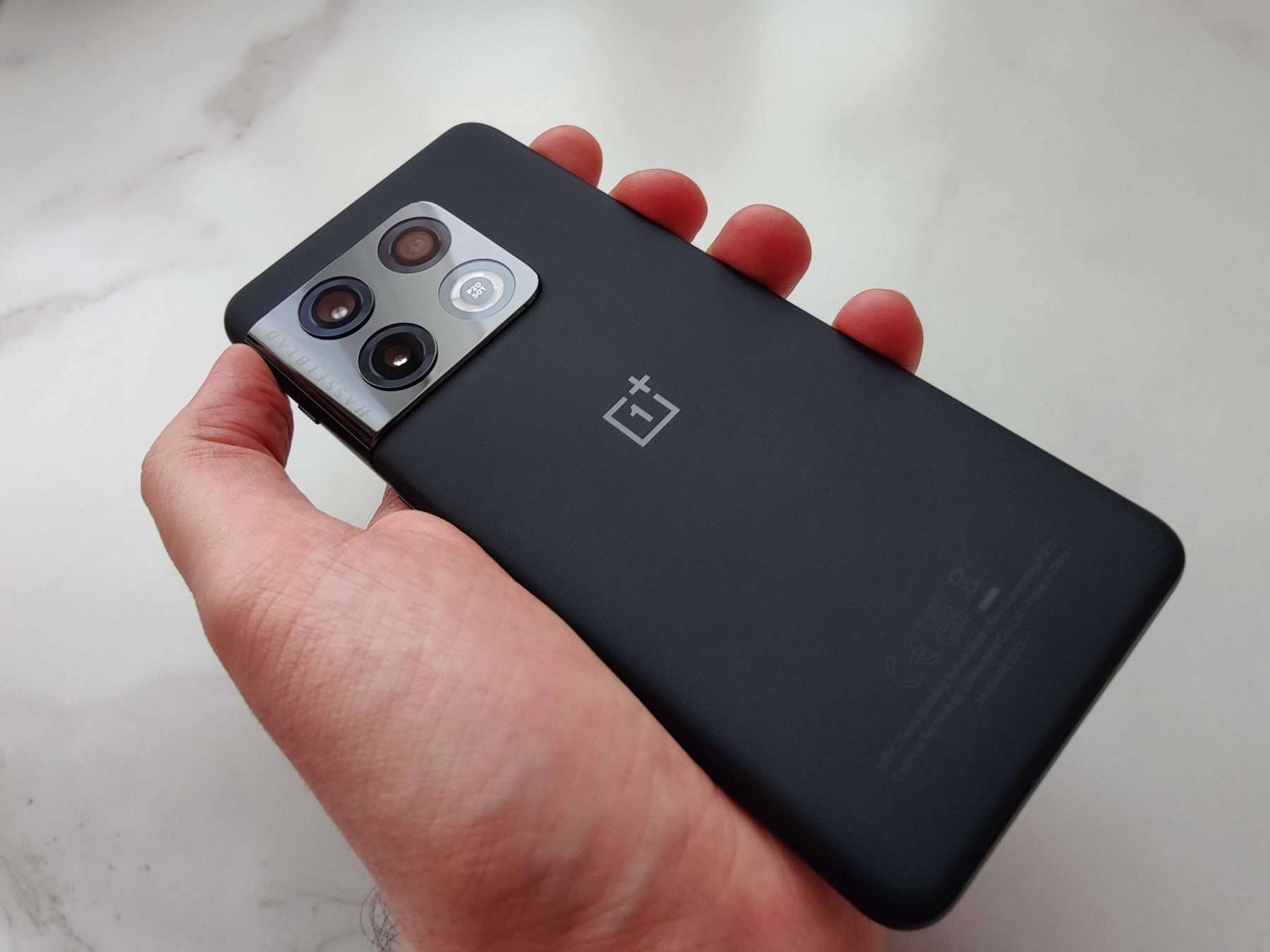 OnePlus have been pretty consistent with their phone updates the last few years and the release of the OnePlus 10 Pro could certainly be called consistent. It’s a nice incremental update to the OnePlus flagship line and takes the mantle from the OnePlus 9 Pro as the current best phone that OnePlus offers. (NOTE: there is currently no plans for a non Pro 10 according to OnePlus)

Now, flip it over and that’s a different story. While it’s clearly been inspired by other camera bumps out there, it’s very much its own thing. Jokingly online, the camera configuration has been called the ‘stove top’, and you know what, I can see that. The 3 cameras and flash are in a square configuration with the flash being in the lower right and ring light (of sorts).

We have the Volcanic Black version for review and I have to say I love the texture of the back of the phone. It’s just grippy enough to make the phone feel secure, but also keep fingerprints at bay. Going around the rest of the phone, there’s not much else to say. USB-C down the bottom, power and notification slider on the right and volume on the left. Pretty standard setup for OnePlus, and we’re glad the notification slider is still present here.

While on the topic of Design, I have to give credit to the cases OnePlus creates for their phones. In our review sample, they included a Sandstone case (a classic OnePlus case / texture), but they also included a ‘Quantum Photography Bumper Case’ and it has to be the coolest case I’ve ever had on a phone. They did something similar with a case for the Nord 2, but this one is just sleek. You can see it below. 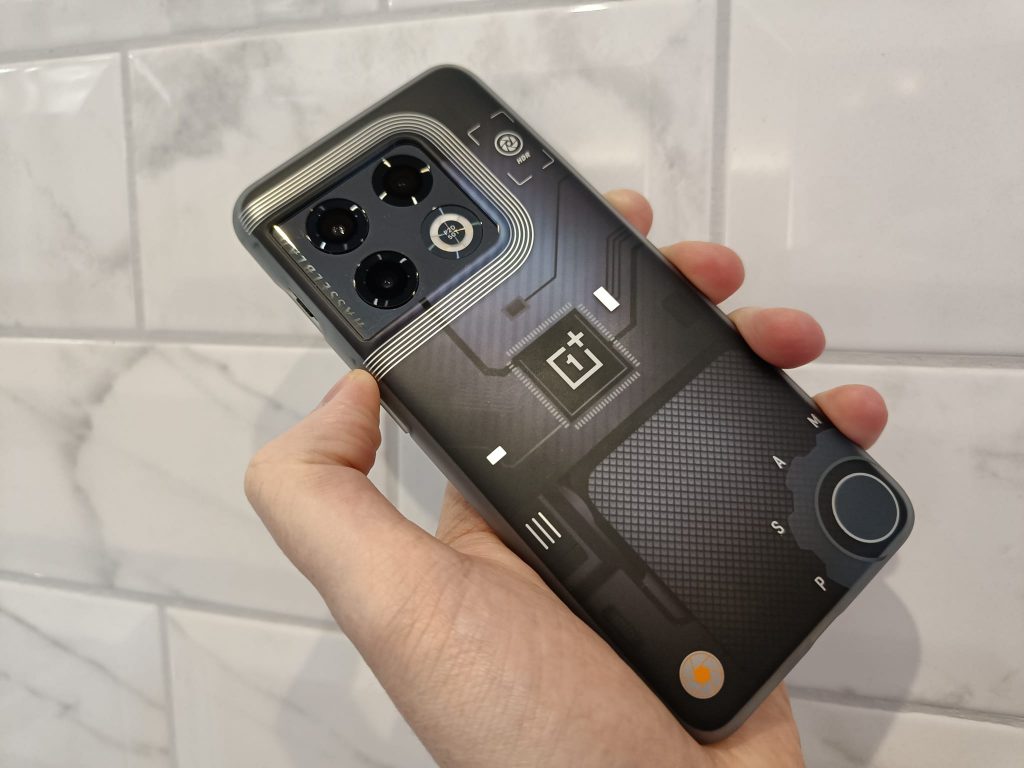 This is the first OnePlus phone to ship with the new new Snapdragon 8 Gen 1 Mobile Platform and it’s just as fast as you think it should be. It handles all day to day tasks, under almost any load without a stutter. To keep things cool, the OnePlus 10 Pro is also equipped with a 5-layer 3D Passive Cooling System that is the most advanced cooling system ever in a OnePlus phone and helps to maximize performance from its processor. If you were to take the cooling system out of the 10 Pro, it would cover an entire A5 sheet, so there’s a lot of cooling tech packed in there.

On top of the processor, you can either get the OnePlus 10 Pro with 8gb RAM / 128gb Storage or 12gb RAM / 256gb Storage. The Storage is UFS 3.1 which makes it super fast, so much so in fact, that you can set your phone to use a set amount of the storage with a feature called ‘Ram Expansion’. I have the 8gb RAM model for review and by default it allocated 3gb of storage if needed to supplement the RAM. I’ve not noticed any performance issues during my time with the OnePlus 10 Pro, so that all seems to be working as expected. 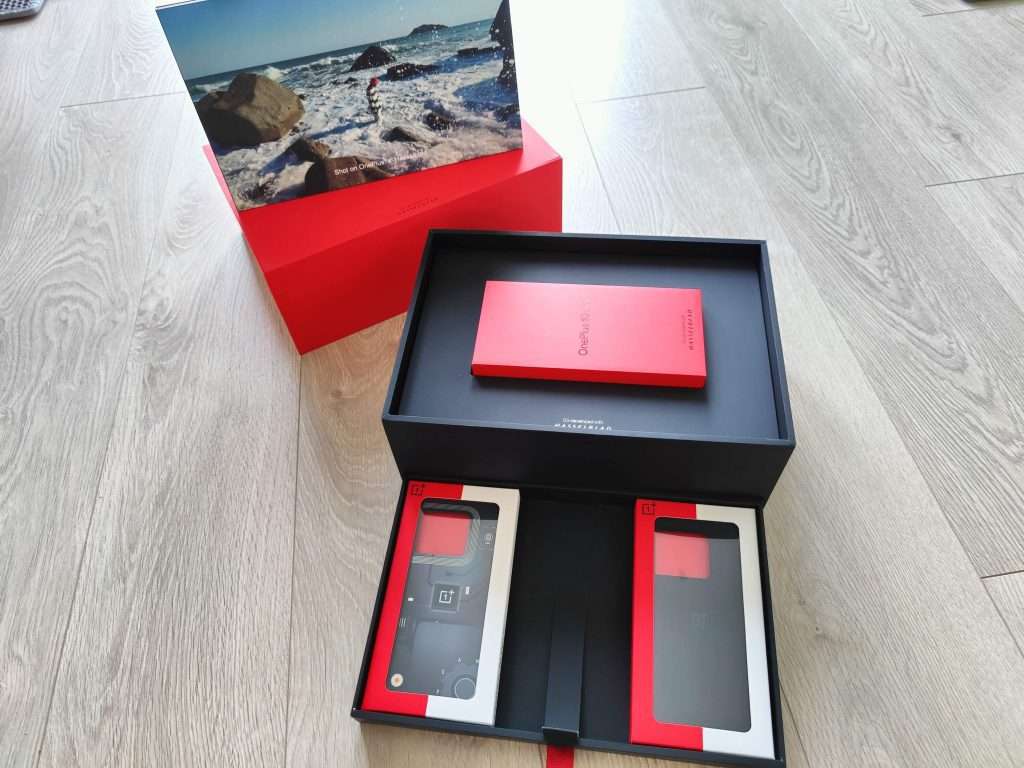 The OnePlus 10 Pro’s 6.7-inch QHD+ display benefits from improved LTPO technology that allows the device to adjust its refresh rate between 1 Hz and 120 Hz even faster than the OnePlus 9 Pro and is based on the type of content being viewed. Because of this, the OnePlus 10 Pro’s display consumes less power than displays fixed at a 90 Hz refresh rate, so even though it’s got a faster, better screen, it is more efficient due to the ability to drop to 1 FPS as required.

OnePlus has mentioned that traditionally, smartphones have their display calibrated for one specific level of brightness, meaning colors can become less accurate if brightness is significantly increased or decreased. To solve this, OnePlus have come up with Dual Color Calibration. That means that the OnePlus 10 Pro’s display has been calibrated at two levels of brightness – 500 nits and 100 nits – for 50% greater color accuracy when viewing the OnePlus 10 Pro’s display at low brightness.

The screen is also covered by the most advanced glass that Corning make for phones currently, that’s Gorilla Glass Victus. It’s meant to survive scratches and drops from harder things and higher places, which is always a good thing 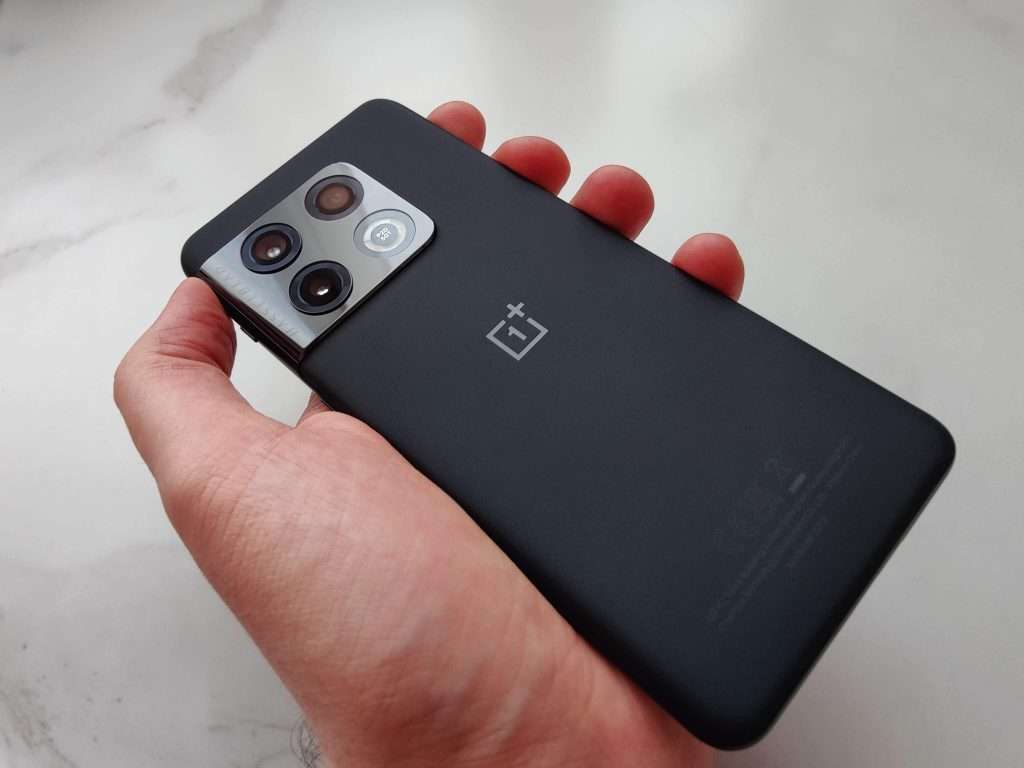 The 10 Pro’s main camera is the same as that found in the 9 Series, but that’s not a bad thing as we found the camera in the 9 to be great and the same is true of the 10. The OnePlus 10 Pro’s second-generation Hasselblad Camera for Mobile supports the OnePlus “Billion Color Solution” which allows Natural Color Calibration with Hasselblad to be applied to over one billion colors. This means each of the OnePlus 10 Pro’s three rear cameras is capable of shooting in full 10-bit color. This means it’s photos can have 64 times more color than smartphones that shoot in 8-bit color.

The OnePlus 10 Pro has new ultra-wide camera offering a 150° field of view that can take photos that are four times wider than those captured by 120° ultra-wide cameras on other smartphones. The photos from the wide 150° lens are pretty cool. You get soo much more of the shot in. You can also enable a ‘fish eye’ mode for some really creative shots as well. You can see from the samples below, the regular shot first, and then the 150° shot. You can see an enire seat and shed in my garden that you couldn’t see with the regular lens.

The OnePlus 10 Pro also includes a “Hasselblad Pro Mode” and can capture in 12-bit RAW on all three rear cameras, complete with Hasselblad Natural Color Solution for Mobile. There is also a new RAW+ that lets you capture in 12-bit RAW while keeping the OnePlus 10 Pro’s computational photography to deliver higher quality photo files with more information, improved dynamic range, and improved noise reduction. (according to OnePlus as at the time of writing, I was unable to review RAW photos on my home setup) 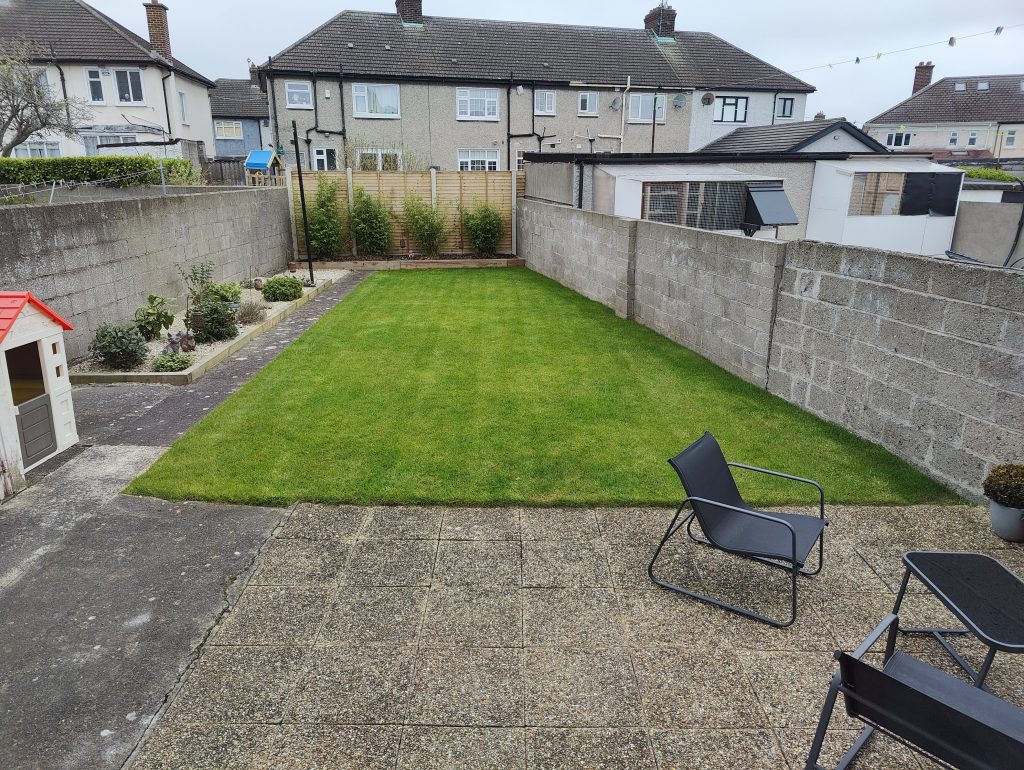 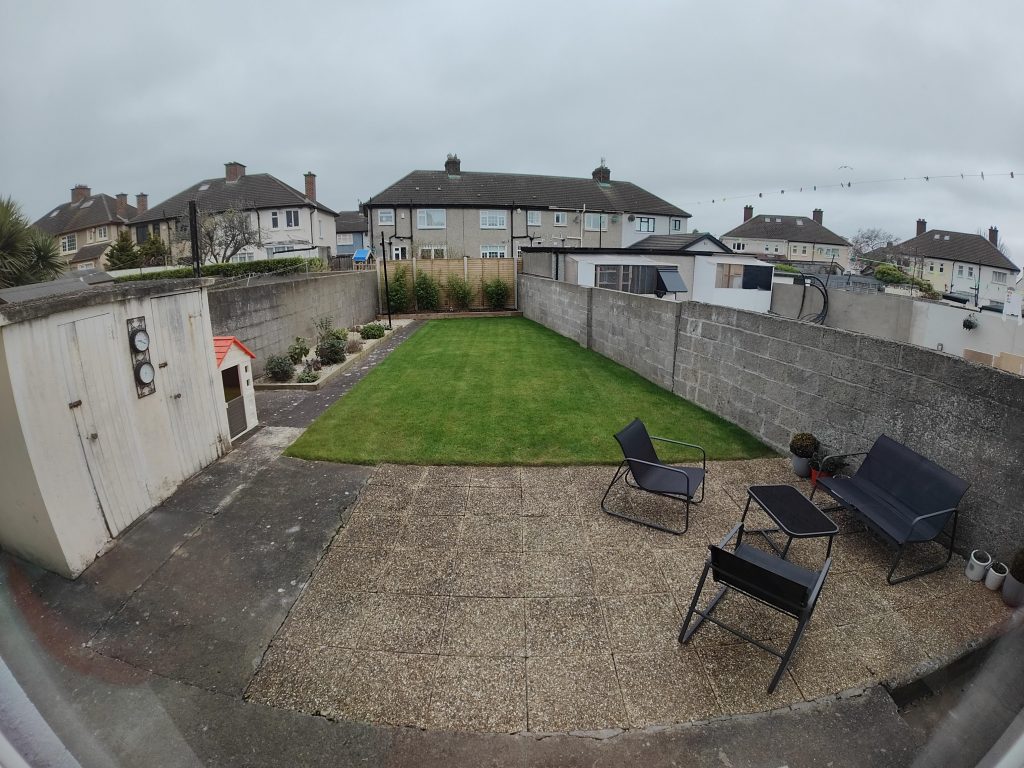 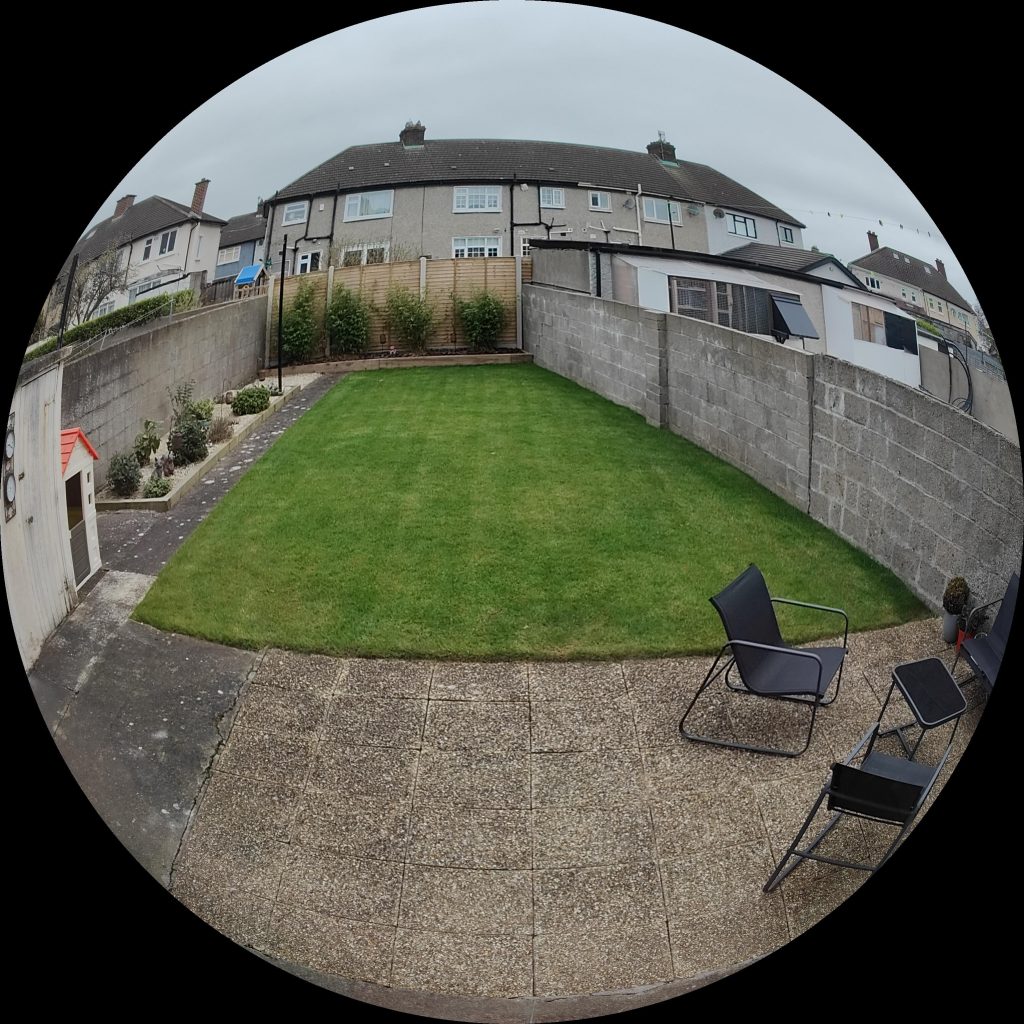 I’m not sure what Magic juice OnePlus have added to the OnePlus 10 Pro, but during my testing the battery has been remarkable. Easily 6+ hours of screen on time with 30-40% battery left. And that’s with heavy usage.

Thankfully, The OnePlus 10 Pro supports some of the fastest wired charging speeds on a  phone. Gone is OnePlus’s branding for their charging tech and now we see the collaboration with Oppo peeking through with the including of 80W SUPERVOOC charging. The OnePlus 10 Pro has a massive 5,000 mAh battery, but even with it,  the phone feels thinner than the OnePlus 9 with a 4500mAh battery.

The OnePlus 10 Pro is a nice incremental update to the OnePlus Line. Should you run out and get it if you have a OnePlus 9 / 9 Pro? probably not, but it’s a nice upgrade if you’re on an older phone for sure, and it’s priced competitively as well. The pricing can be found in the table below

We’ll be comparing the cameras, battery and overall performance of the OnePlus 10 Pro against other flagships currently out there and those entering the market shortly so you can make an informed decision about which new phone is best for you.

You can find out more about the OnePlus 10 Pro, including stockists on OnePlus’s site: https://www.oneplus.com/ie/10-pro

OnePlus 10 Pro is a fine evolution, but not a revolution.