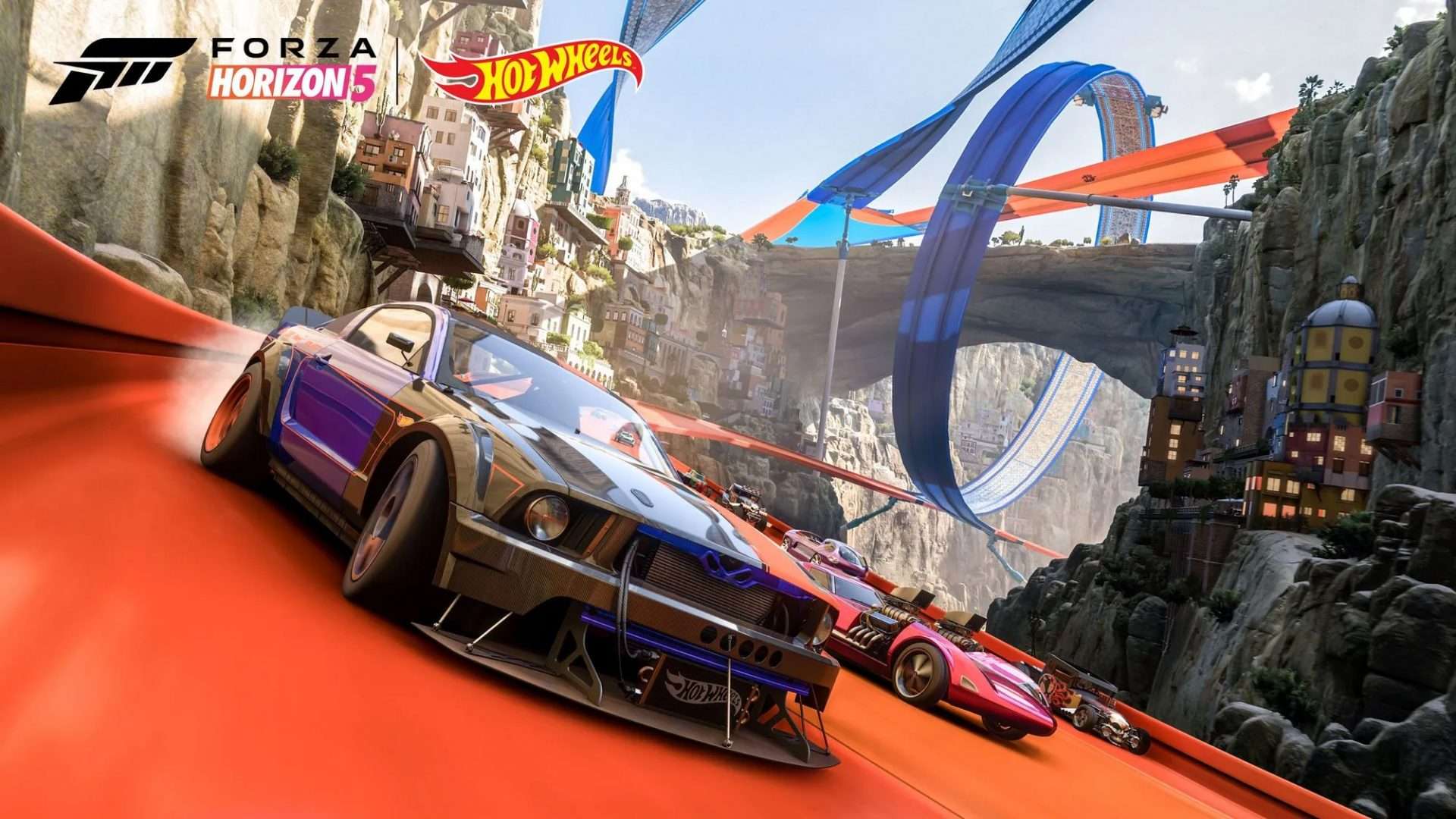 Forza Horizon 5 has its first significant piece of DLC and that is a trip back to everything Hot Wheels! If you’re getting a sense of deja-vu well, this is the second time Forza has done this (Forza Horizon 3 did it five years ago). How does it hold up to it, and the new Hot Wheels Unleashed arcade racer? Let’s find out!

Forza Horizon 5: Hot Wheels unlike its predecessor doesn’t put you on a new island, it puts you in a massive biome in the sky above Mexico with four distinct worlds. You’ll get a mix of icy racing around mountains, driving down volcano tracks in the desert, racing around a jungle and then finally in the sky right around the horizon base. These are mostly set as dressing to Hot Wheel’s iconic orange and blue tracks, but they still add a bit of variety. Tracks this time around are a bit more interesting with the addition of magnetic track sections (for even more death-defying driving, ice sections and water sections to really push your ability to handle the cars to their limits. 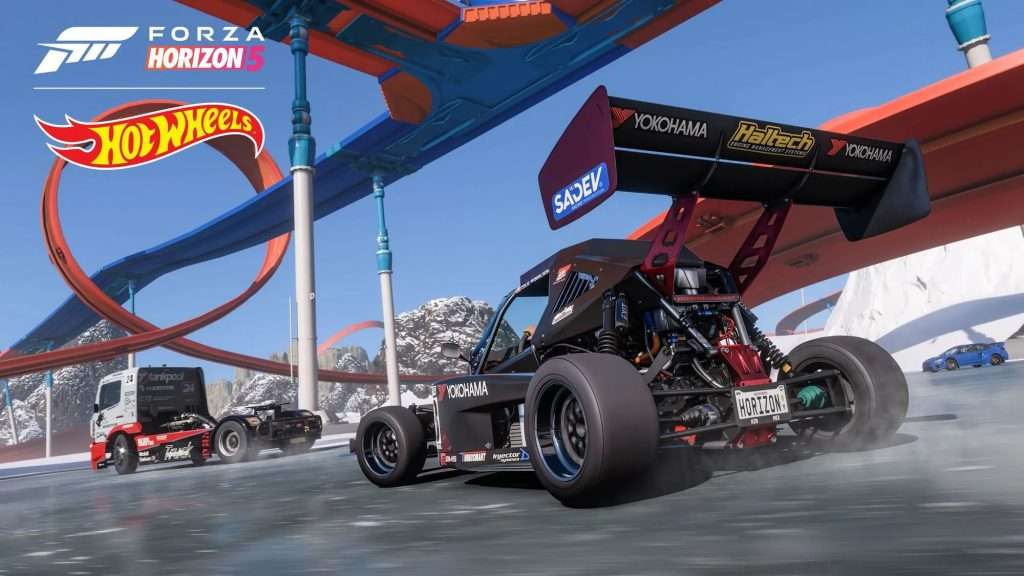 Career-wise, you’ll go through the ranks and complete missions to become the ultimate Forza Horizon 5: Hot Wheels champion. It’s a surprisingly linear system for Forza, but it works well and drives you to explore each area of the map. Interspersed through Forza’s typical races, PR stunts and more are Top Gear style mini-podcasts as you race that give you a really detailed history of Hot Wheels, even if it does sound like a bit of an ad at points. The career here will last you about 6-8 hours with a fair bit of repetition in there. I will say, the difficulty levels in this are all over the place. Some races on the hardest difficulty you can ace no bother, some you’ll need to drop down 2-3 levels to be competitive. 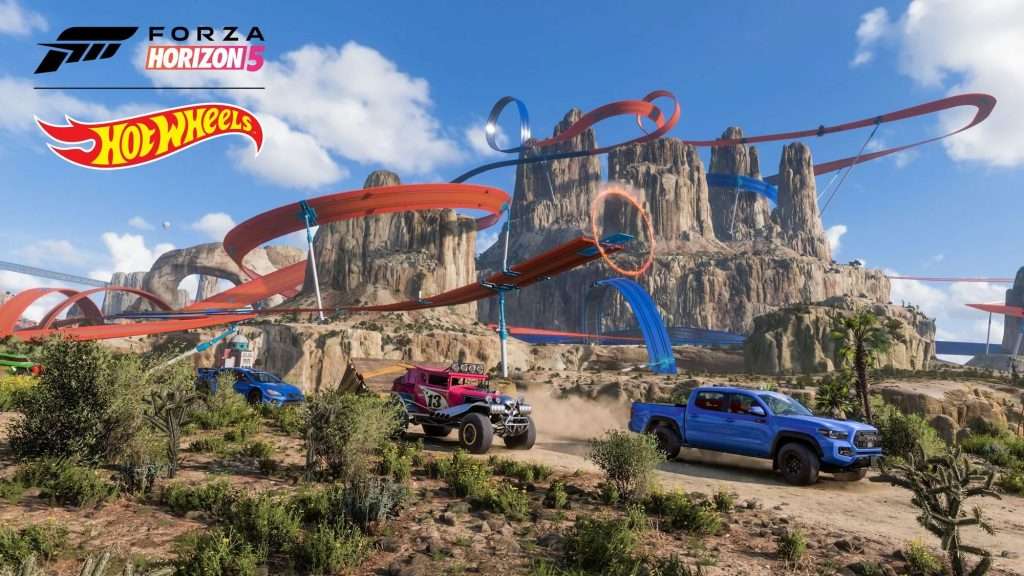 Forza Horizon 5: Hot Wheels comes with a limited range of new cars, but they’re still a lot of fun to drive. The highlight for me was going down a huge piece of track, propelled by speed boosts travelling so fast, the entire UI started to shake. That was pretty special! You’ll also get Hot Wheels pieces to build your own tracks with which is pretty neat, if a little unwieldy for newcomers to the series. This all really does show that Microsoft are trying to create the home of racing with Forza, with Motorsport for serious race fans and Horizon for more casual fans and it’s working. 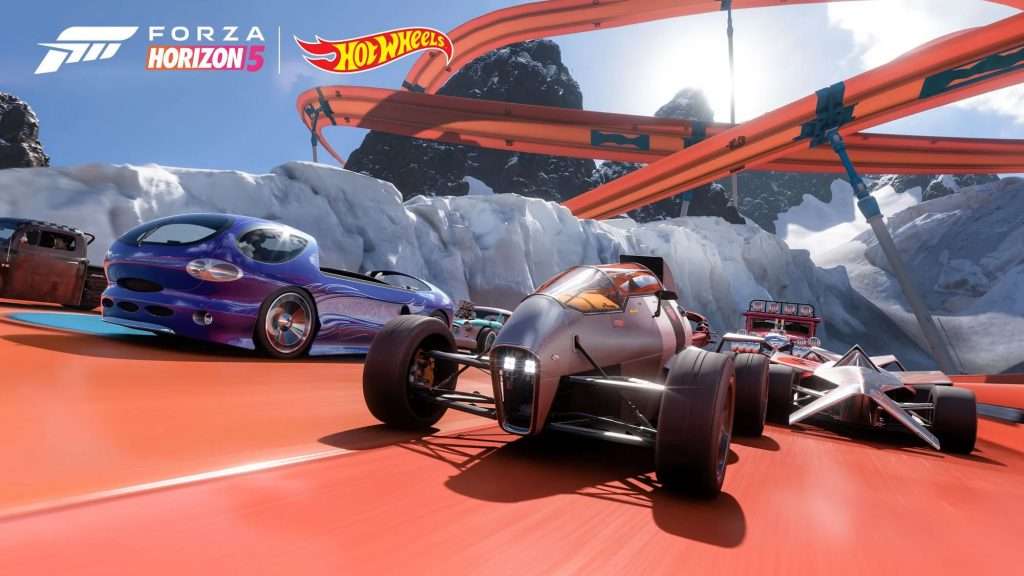 The sad kicker is, there’s actually a better Hot Wheels game that does the franchise even better justice and that is.. actually made by Hot Wheels. I picked up Hot Wheels Unleashed on a whim from Amazon on prime day and it’s been a surprising amount of fun! While you can’t race such a wide range of cars as Forza, it’s a surprisingly competent arcade racer with a much bigger roster of cars, more imaginative tracks (all miniature sized) and a, dare I say, better track editor? Even comparing Horizon 5’s Hot Wheels DLC with Horizon 4’s DLC of Fortune Island and the **excellent** Lego DLC, you’re forgiven if you’re feeling a little disappointed. Microsoft, here’s hoping the next DLC brings something new and even more epic to the table.

If you’re a fan of Hot Wheels and Forza, then this is a must buy for you. If you have already got the Forza Horizon 5 Premium Edition, Expansions Bundle or Premium Add-Ons Bundle then sweet, you already own it! If you don’t, then that’ll be around €20 to buy (as well as needing to own Forza Horizon 5 or have Game Pass). Either way, if you’re a big Forza fan, this is worth adding to your wish list.

You can purchase Forza Horizon 5 Hot Wheels DLC at the Microsoft Store.