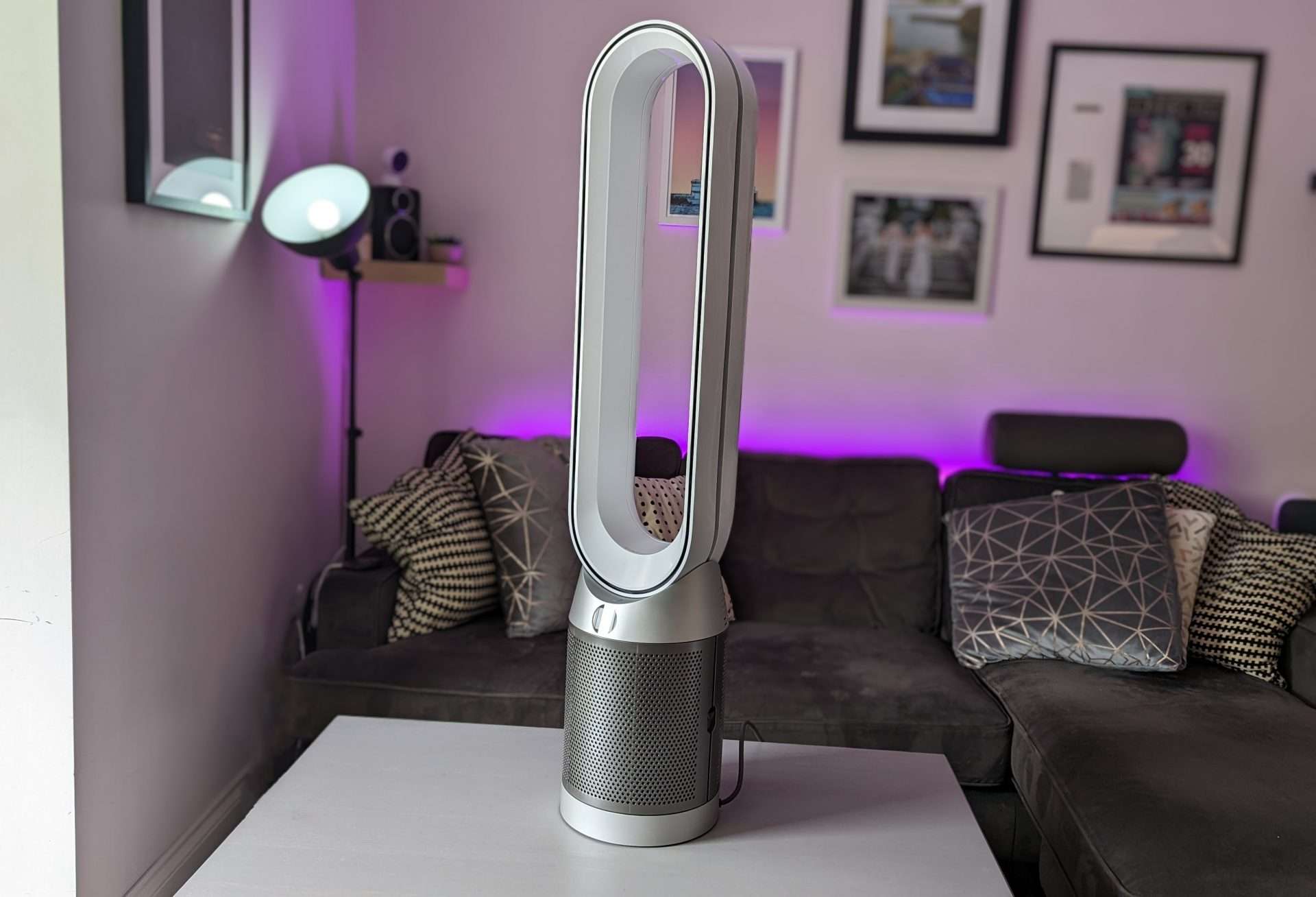 As we’re all painfully aware, we’ve been going through quite the bout of hot weather recently so interest in ways to keep yourself and your home/office cool is definitely at an all time high. Enter Dyson’s Purifier Cool Autoreact fan, which not only cranks out some impressively strong cooling winds, it also automatically purifies those very winds, thanks to a number of clever components and built in features. We’ve been testing the Dyson Purifier Cool Autoreact for a few weeks now and here is what we thought.

To start, we’ll cover some of the key specs and features that are included with this particular model, the TP7A, which is different to the earlier TP07 as Dyson removed the WiFi and Bluetooth connectivity functionality so you won’t be able to connect this particular model to the Dyson Link app or your smart home assistants. With that out of the way, here are some of the other features included in this device.

According to Dyson, only its purifiers have ‘Air Multiplier’ technology, which means distant pollutants can be pulled into the machine, while purified air is pushed out into the room.

The purifier also features a fan to cool the room with purified air. Users can simply switch this feature off in cooler weather. 350-degree oscillation means that the purifier can be placed in the center of a room as well as at the edges.

The Dyson Purifier Cool features a HEPA H13 filter, which means it should, on average, remove at least 99.95% of airborne particles.

Weighing in at just 4.65kg, the Dyson Purifier Cool is light enough to lift with one hand when moving it around the place. The 6 foot power cable also gives you enough leeway to plug into most sockets without excess cord cluttering up your space.

The Dyson Purifier Cool is designed to cover areas of up to 800 square feet, making it a good choice for homes with larger rooms or large open office spaces. That said, living in a small two bed apartment in the city centre, positioning the fan became more of a game of ‘where doesn’t it get in the way.’ Now, admittedly, that’s more an issue with my apartment size and not the device but it’s something worth considering if you happen to live in a small to medium size home/apartment and space isn’t bountiful.

With it’s almost iconic ‘bladeless’ design, tall and slender silhouette and modern, clean colour options, the Purifier Cool will look the part in most modern rooms but it’s definitely not petite when it comes to finding a place for it in a room.

The Dyson Purifier Cool is easy to set up and use almost straight out of the box. Simply fit the HEPA filters provided and replace the cover at the base of the machine before switching it on using the single power switch on the front. 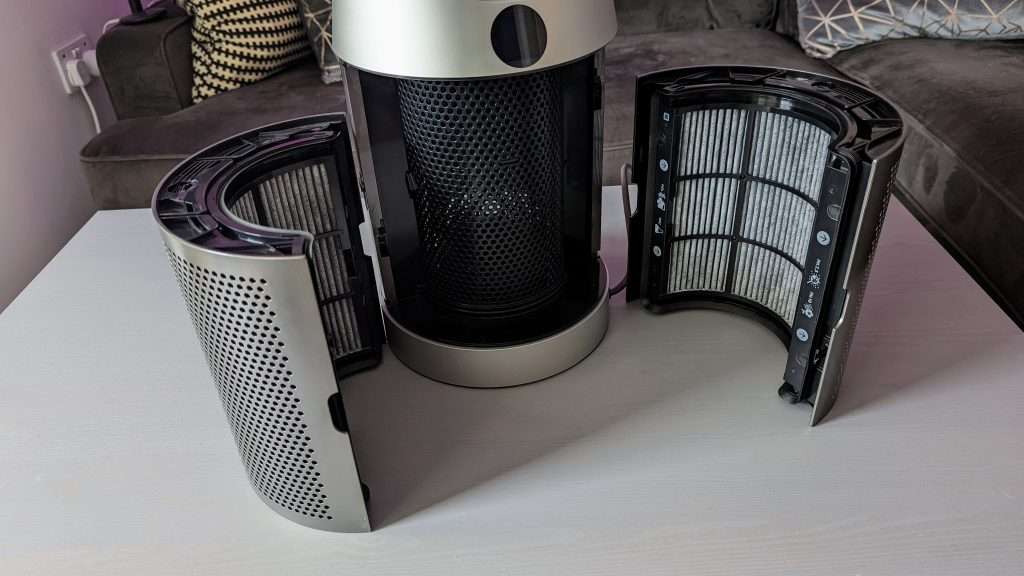 The purifier features a small LCD display at the front of the model. The display switches between icons that show: 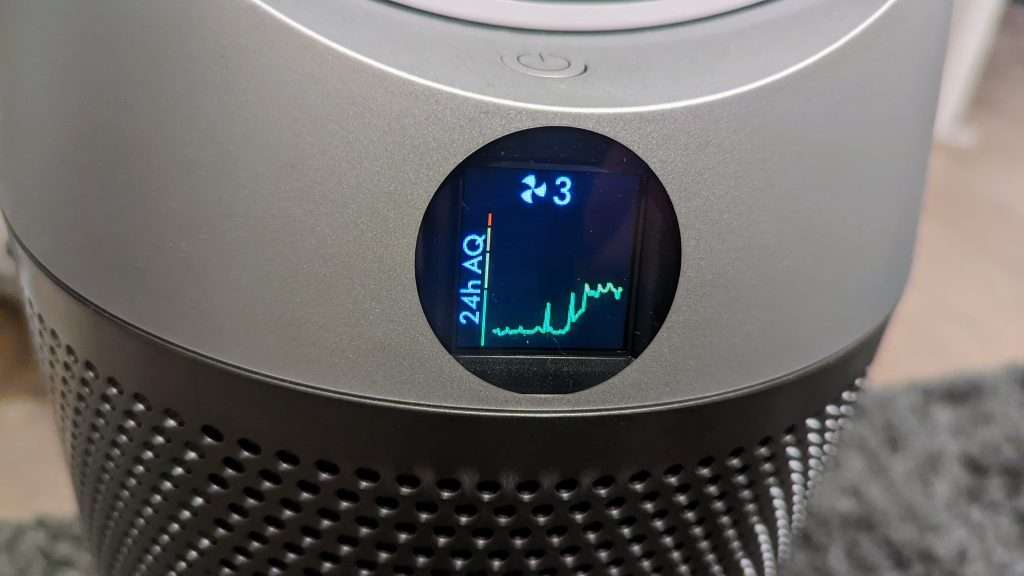 ·       Microscopic particles smaller than 2.5 microns, including smoke, bacteria, and allergens – shown as PM 2.5.

·       Volatile organic compounds (VOCs), which can be defined as gases released from a range of sources including aerosols, paints, and cleansers. 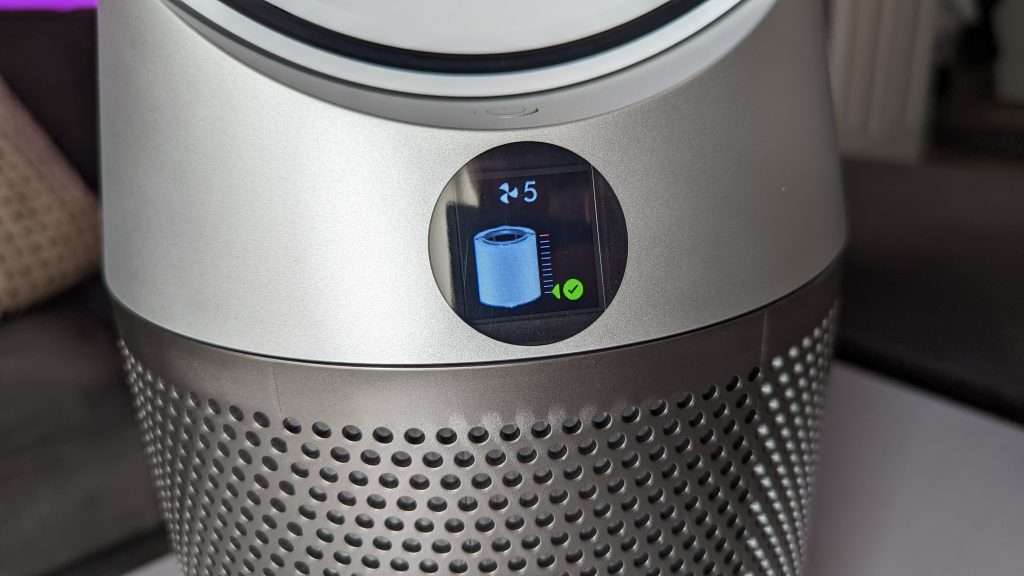 Users can flip between icons using the included remote control with each icon reporting in real-time while the purifier is active.

The purifier also features a handy ‘Auto’ mode, (hence the term ‘Autoreact’ in the product name) which allows onboard sensors to automatically detect particles and adjust settings to work efficiently, while a night mode dims the LCD screen and adjusts the purifier to its quietest settings. An in-built sleep timer can also be used to turn the purifier off at a preset time.

Users can also set the oscillation angle from a range between 45 degrees and 350 degrees using the remote control, and choose between 10 ‘air speed’ settings alongside the auto and night modes. 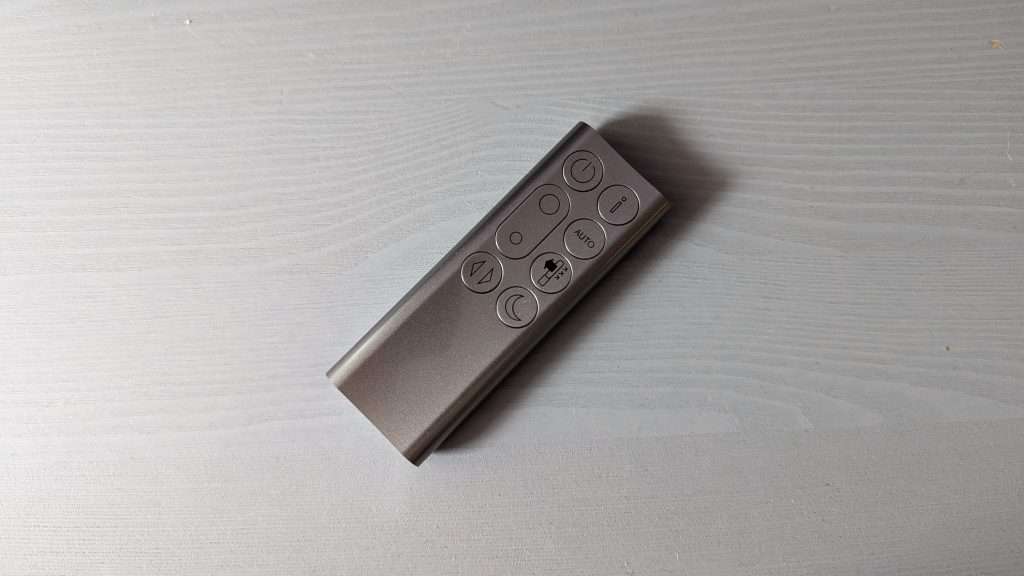 Speaking of ‘air speed’ options, when the fan was going ‘full tilt’ on its 10th level, whilst understandably louder than the lower settings, the air that’s being pushed felt more consistent and less turbulent than you might be used to from a regular, blade-based fan. This might sound trivial but, when you’re relying on a fan to keep you cool whilst sleeping, the lack of turbulent air hitting off your face or body really does help towards less disturbances whilst you sleep.

Now, we didn’t have the relevant or appropriate tech to fully test out whether the Purifier Cool was able to live up to Dyson’s claim of being able to remove 99.95% of airborne particles (which is quite the lofty claim) we did appreciate its automatic capabilities to just switch on and start purifying the surrounding air when any of the above particles or compounds were spotted in the air.

My girlfriend and I did notice it switching on almost immediately whenever we used aftershave/perfume or hairspray, with the ‘VOCs’ icon hitting its upper limits in terms of how much of those particular compounds were in the air, so that instant response was appreciated.

There are many things we like about the Dyson Purifier Cool. Its sleek and stylish design makes it a talking point in any room, and the neutral white and silver color scheme means it can blend in with most interiors. 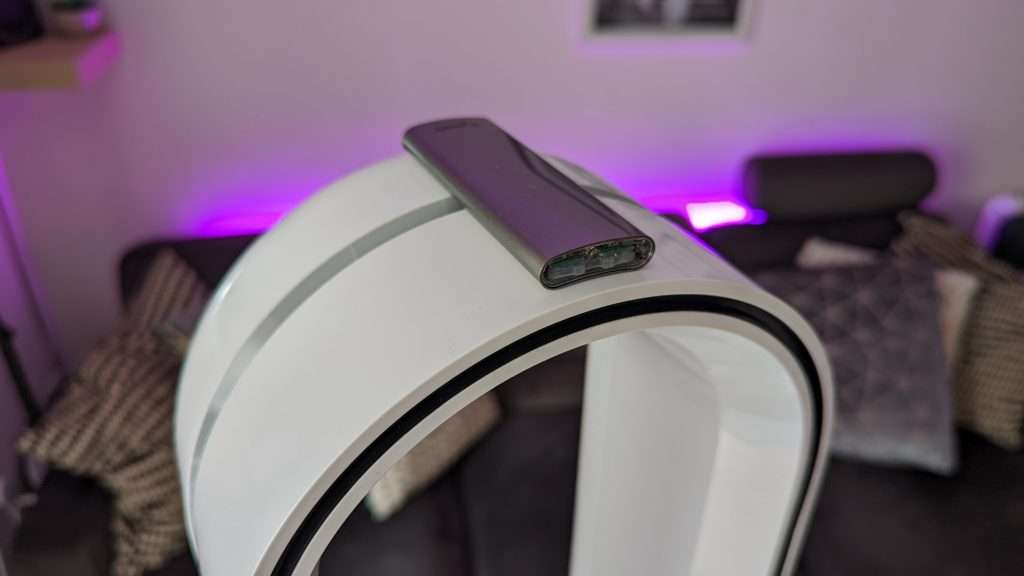 We also like that it can double up as a fan when the weather gets warmer and that the purifier is easy to control via the remote control, which attaches nicely to the top of the purifier with a magnet, but would have liked if Dyson had left the WiFi and Bluetooth connectivity intact to add even greater levels of remote control. Also, the price is pretty steep for those on more of a budget so it’s not going to be for everyone.

The Dyson Purifier Cool Autoreact is available from Dyson.ie and other leading electronic retailers from €549.99. 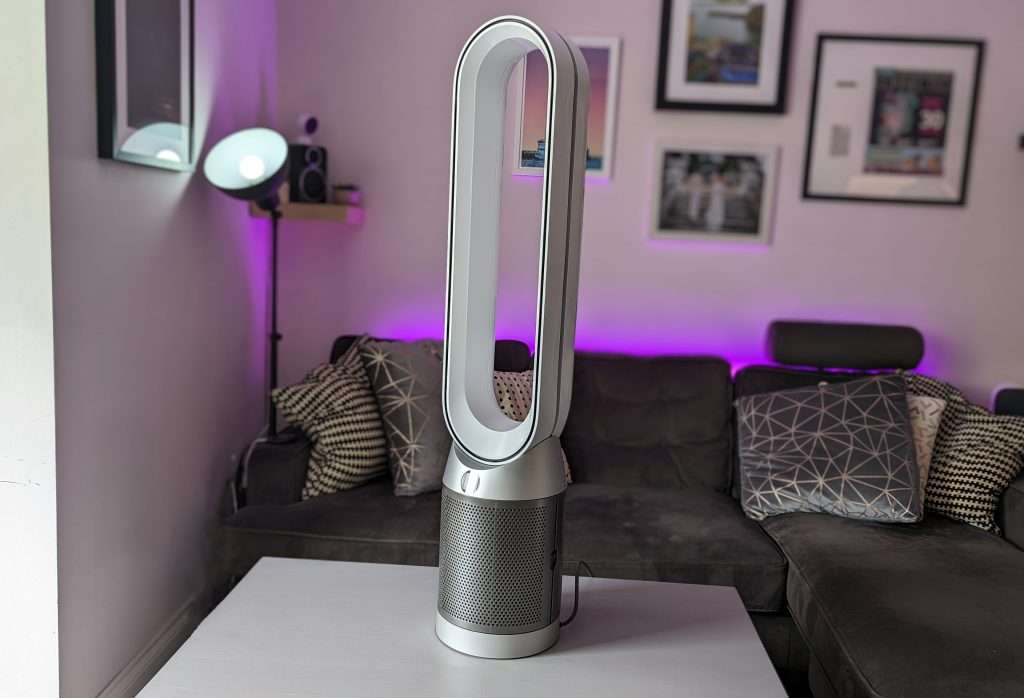 There are many things we like about the Dyson Purifier Cool. Its sleek and stylish design makes it a talking point in any room, and the neutral white and silver color scheme means it can blend in with most interiors. We also like that it can double up as a fan when the weather gets warmer and that the purifier is easy to control.