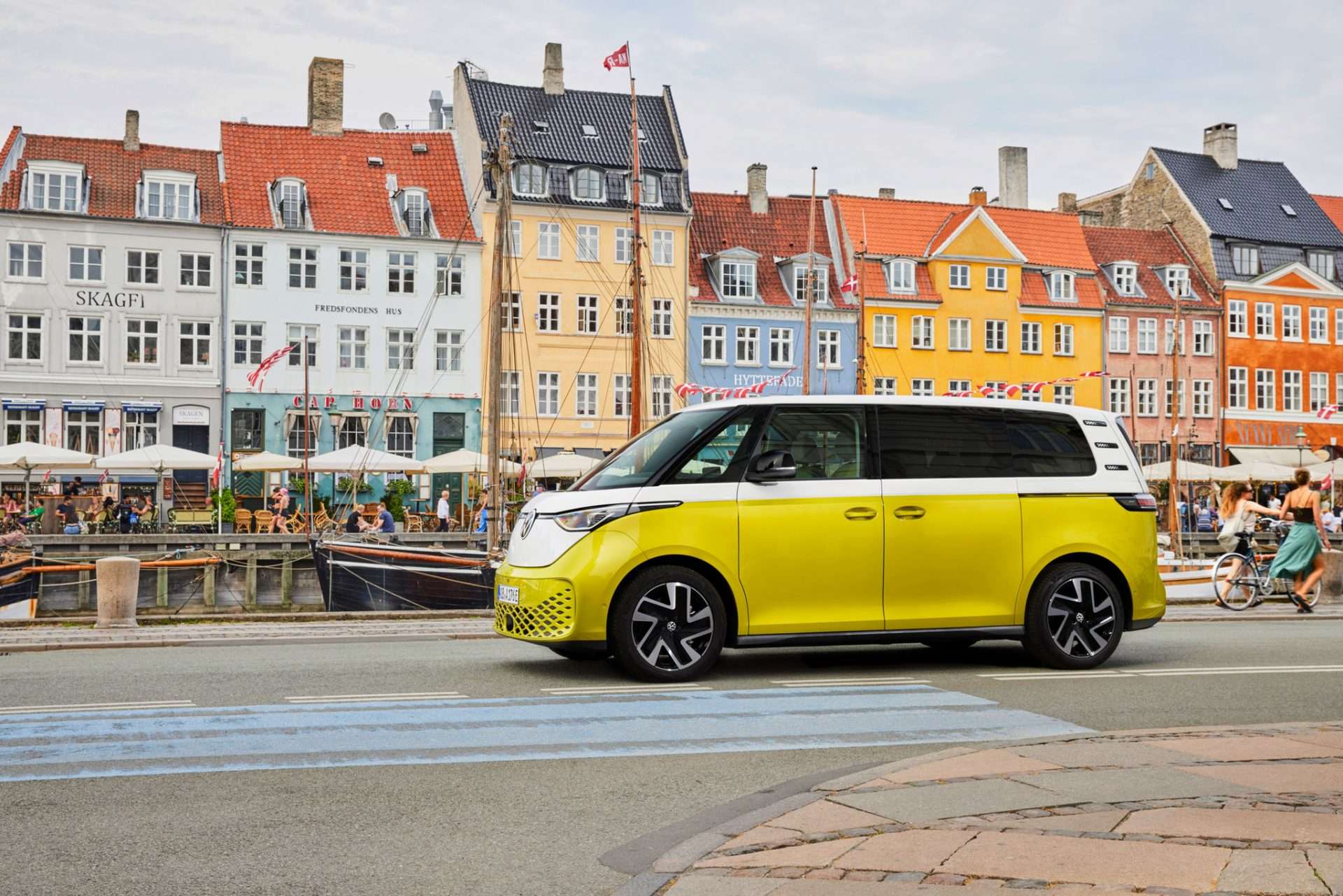 Volkswagen’s ID. 4 built upon the success of the ID. 3 and has become a firm fixture in the Irish top selling charts. The ID. Buzz is their latest foray into the EV market. The design harks back to the illustrious T1 and Bulli of the 1950s and 1960s, but the technology and electric drive system brings the icon bang up to date.

Fans of VW’s ID. range will be happy to hear that the Buzz will come with the latest 3.2 software. As well as upgrading the standard software we are used to in the current ID. range, this version will include ‘Plug and Charge’ at compatible DC stations. You just pull up to the charger, plug in and the car does the rest for you. No need for apps or RFID cards. Capability for Over the Air updates are also being rolled out as standard. Tech fans will love the application of ‘swarm data’ which allows the car to give warning of upcoming dangers within the vicinity of the Buzz.

Aesthetically, the ID. Buzz is drumming up a lot of excitement. The design is reminiscent of the VW vans of decades past, but is firmly influenced by the current iD. range. The light bar at the front houses the sophisticated iQ. Light and LED matrix. The rear light cluster matches the ID. 4’s design and helps break up the van-like silhouette. 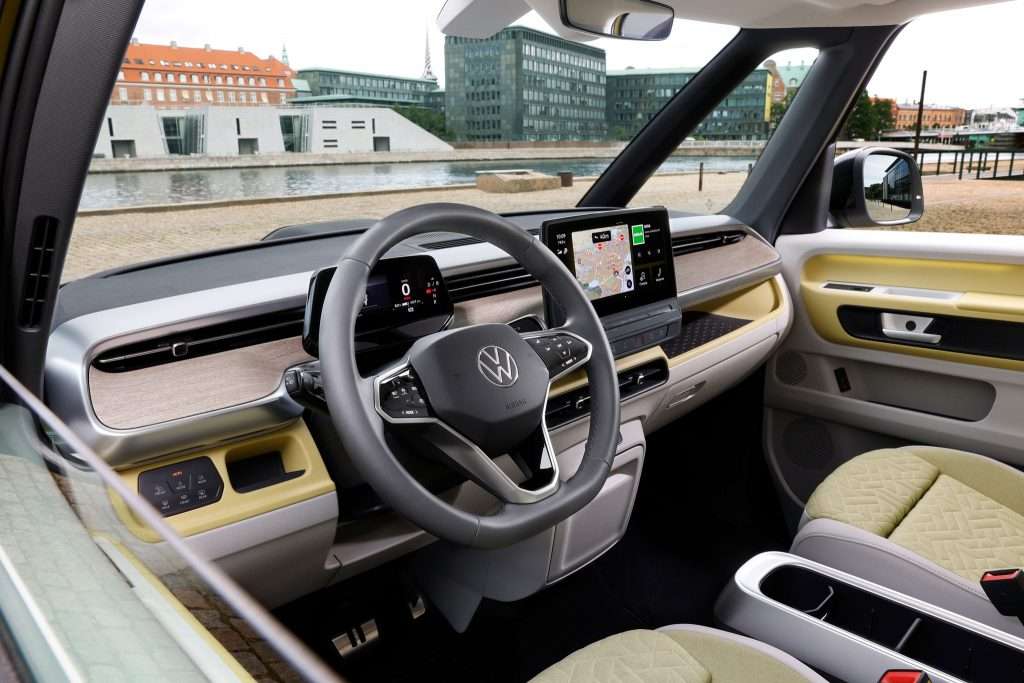 Inside, the design team were not afraid to take risks. Although you can specify more muted colours, the interior is still quite expressive with some bold colouring and mixture of materials. Rich ambient lighting gives life to the cabin through the use of ten different colours. Being based on VW’s MEB platform, the Buzz achieves space and functionality that were not traditionally available to vehicles of this size. One criticism would be that there is a lack of air vents in the back, not helped by the fact that the rear windows do not roll down. There is an array of power outlets, including 45w USB connections and a 230v socket than can be used to power various appliances. Vehicle to Load capability is expected soon.

Driving the ID. Buzz is a unique experience. It functions as a spacious MPV, but drives more like a car. Thanks to rear mounted motor, there is plenty of space up front for the wheels, resulting in a turning circle that is almost identical to the much small VW Golf. Power is delivered via a Permanent-magnet synchronous motor mounted at the back. It gives out 150kW of power and 310Nm of torque. Top speed is 145km/h and you will get to 100km/h from a standing start in 10.2 seconds.

The Buzz carries a substantial battery of 82kWh, 77kWh of which is usable. It is a big vehicle with a drag co-efficient of 0.285, yet will still achieve 423km of range according to the WLTP cycle. In the real world, you can expect around 320km-360km in most conditions. The Buzz charges back up relatively quickly with its 11kW on board AC charger. Even on a domestic charger, you will easily get up to 100% overnight. On DC, the MEB platform has been upgraded to take up to 170kW on a DC charger. This is the equivalent of getting you from 5% to 80% in 30 minutes, although Ireland still has few chargers capable of those speeds. 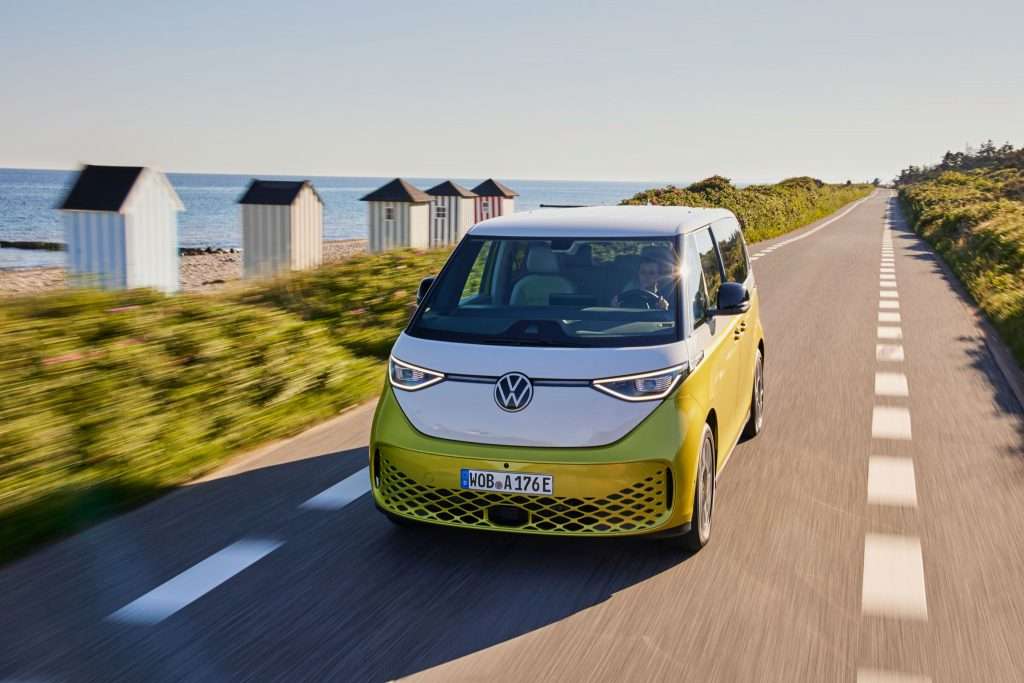 Prices for the ID. Buzz in Ireland will start from about €66,000, but you will easily add to that with some options. This puts the price on a par with the likes of the Model Y Long Range. Having said that, the Buzz is hard to classify and putting your finger on what the competition is will be a difficult task.

The Buzz is a truly modern take on a classic icon. It has been brought up to date as an EV based on VW’s MEB platform. It is packed full of tech for those that want a modern MPV or SUV. Impressively, they have brought all of the practicality that will be sought by families and those needing a lot of space in the back.

This review is in partnership with EV Review Ireland and you can learn more about what I thought of the VW ID. Buzz in the video below.