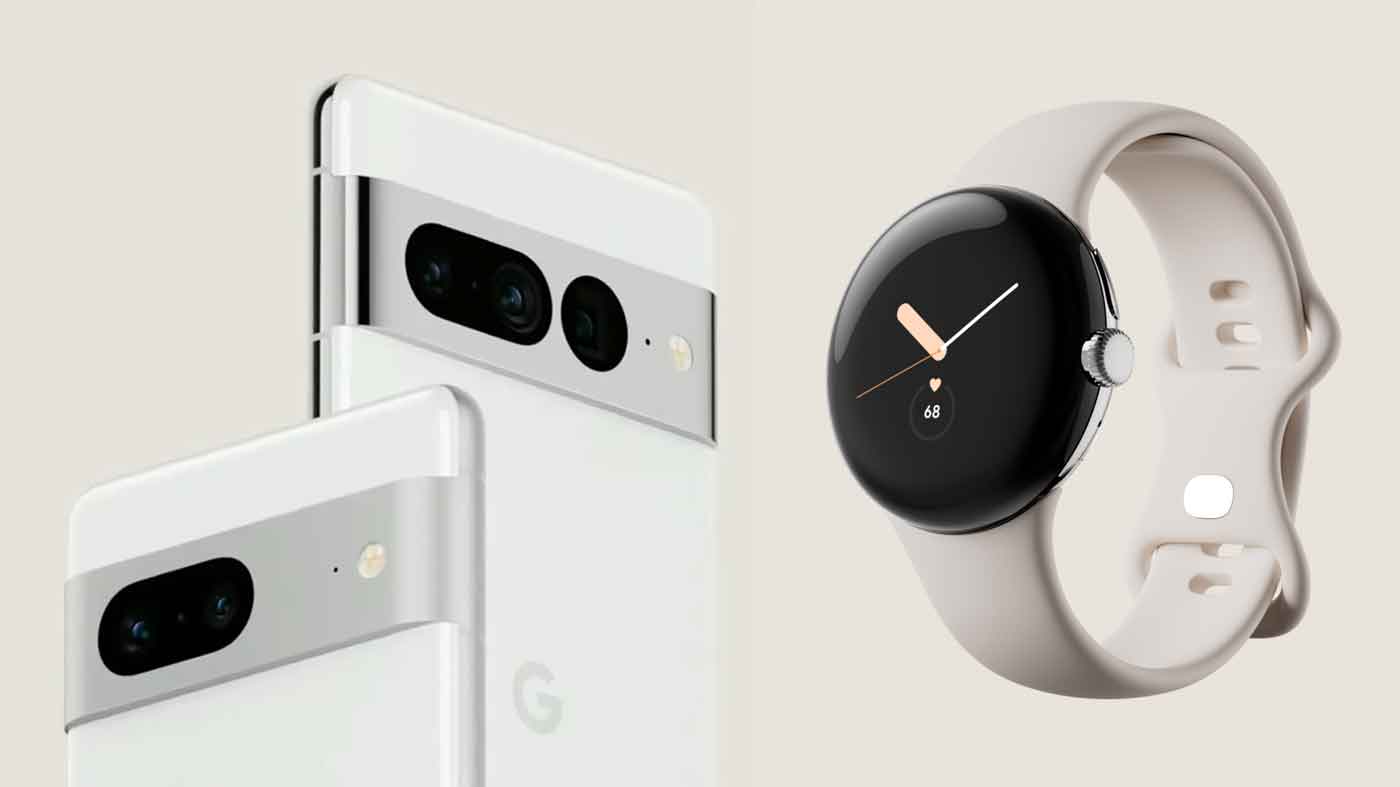 After being first ‘officially’ teased back at Google’s I/O event in May, Google has finally unveiled their latest Pixel smartphones along with their brand new Pixel Watch. As with previous Pixel smartphone launches, a considerable amount of information related to the new handsets has already been available online for a few weeks, or even months now, but we now know all the key specs and features of these new phones along with Google’s first ever official smartwatch, the Pixel Watch. Below is all the info you need to know about each of these new devices. 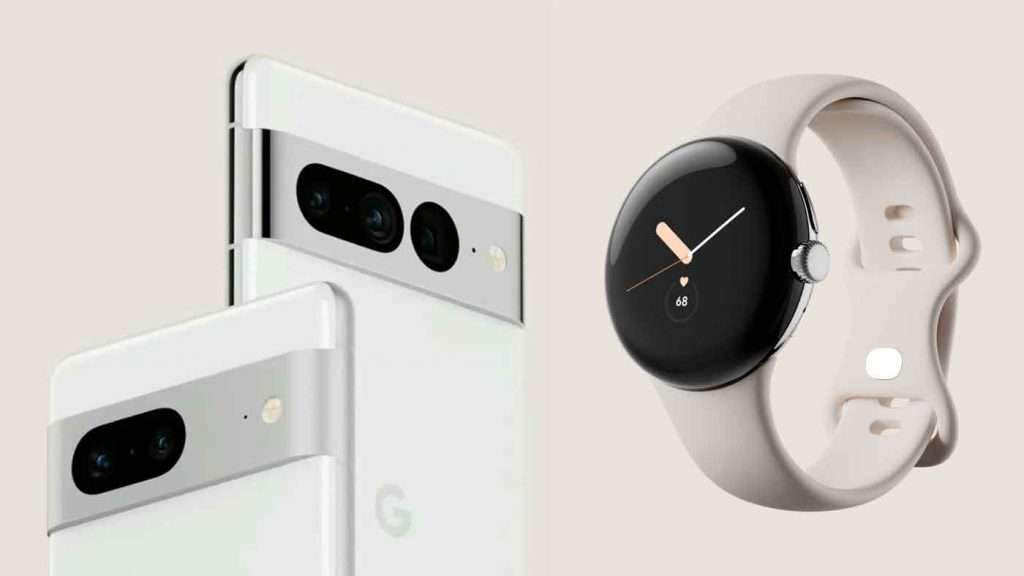 Starting with the handsets, Google are obviously continuing on from the strong design refresh first introduced with the Pixel 6 line. Their striking ‘camera bar’ on the rear makes a return but the camera credentials have been given a welcome boost (more on this later). Internally, Google’s custom-built processor, the Tensor chip, which was also first introduced on last year’s Pixel phones, has been given an upgrade to help with many of the new and improved features on the Pixel 7 line.

The Google Pixel 7 Pro is the flagship of the new model series and is accordingly well equipped. The device offers a 6.7″ 2K display that, unlike last year’s 6 Pro, is almost flat in design which, I for one, am a fan of. The resolution and refresh rate stay the same with 3120 x 1440 pixels and 120hz but maximum brightness has been bumped up to a maximum of 1500 nits.

The Google Pixel 7 Pro comes with 12GB RAM installed and is equipped with 128 or 256GB of internal storage. Unfortunately, but something that’s becoming more and more commonplace, there is no option for memory expansion. When it comes to security, Google is again integrating the Titan M2 security chip. 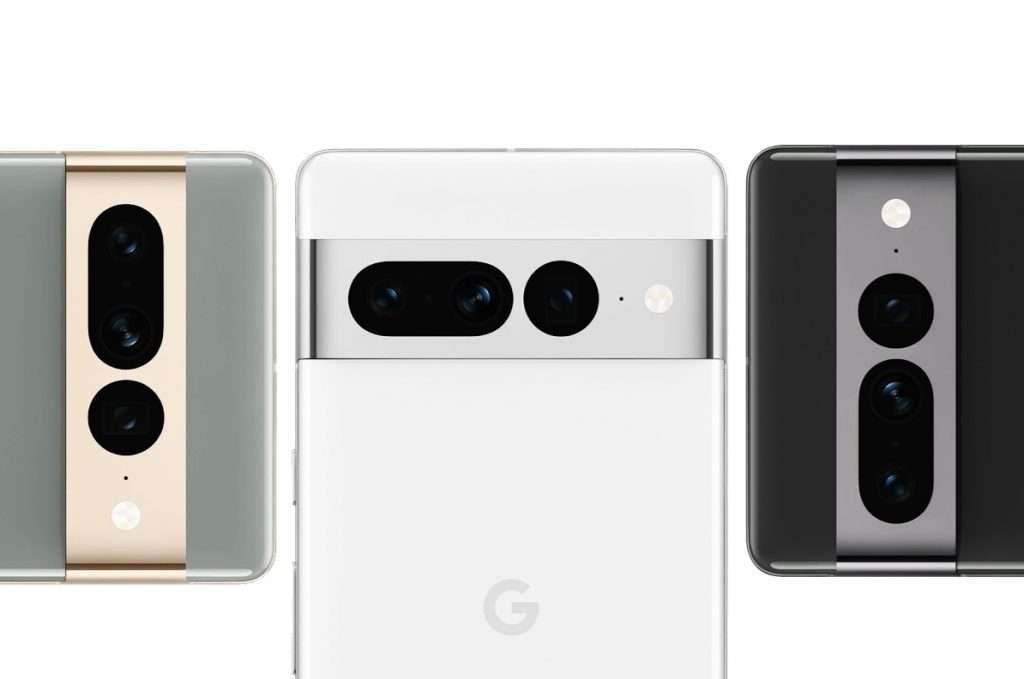 When it comes to cameras, The 7 Pro gets a decent upgrade. Google uses a 50mp camera with optical image stabilization as the main camera and provides it with an ultra-wide-angle camera with 12mp and a 125-degree field of view. The telephoto camera now has a 48mp sensor with a 5x optical zoom (up from 4x on last year’s 6 Pro) and up to 30x high quality digital zoom thanks to Super Res Zoom. This sensor also has OIS. The Selfie camera uses a 10.8mp fixed-focus sensor and has a 93-degree wide field of view.

As usual, Google wants to use the AI ​​capabilities of its new, more powerful Tensor G2 processor and the corresponding software to deliver the best possible images with the Pixel 7 Pro (and of course the normal Pixel 7 as well). Among other things, the devices make it possible to sharpen blurry photos after they have been taken, to remove objects with the Magic Eraser or to carry out translations with Live Translate. Night Sight images are also said to be captured much quicker, thanks to Tensor G2.

They’re also implementing their own version of ‘cinematic blur’ for video capture so we’ll be interested to see how this is implemented in comparison with the likes of what Apple and Samsung are doing. Finally, one of the nicest updates is that all 4 cameras on the phone now support 4K/60fps video recording.

The battery of the Google Pixel 7 Pro is 5000mAh and can be charged quickly both via USB-C cable and wireless charging. Thanks to the Extreme Battery Saver function, the device should offer a runtime of up to 72 hours. In normal, every-day use, the Pixel 7 Pro supposedly lasts more than 27 hours. The device also has two stereo speakers and is IP68 certified as waterproof and dustproof. Secure login using facial recognition is also supported.

With the Pixel 7, the smaller sibling to the flagship Pro handset, Google has stripped out some of the more ‘pro-grade’ features and specs to bring the device in at a more respectable price point but users still get the benefit of the latest and greatest Tensor G2 processor and Titan M2 security chip. (Not like Apple leaving last year’s processor in their newest 14 and 14 Plus handsets to try and push consumers to pick up one of their Pro devices with the newer processor.)

The device comes with a 6.32″ gOLED panel with a 2400 x 1080 resolution and offers a maximum refresh rate of 90hz. This is protected by Corning Gorilla Glass 7 (Victus) and, like its bigger sibling, has a metal frame. The maximum brightness is slightly lower at 1400 nits which is still impressive and should be more than enough for outdoor viewing. 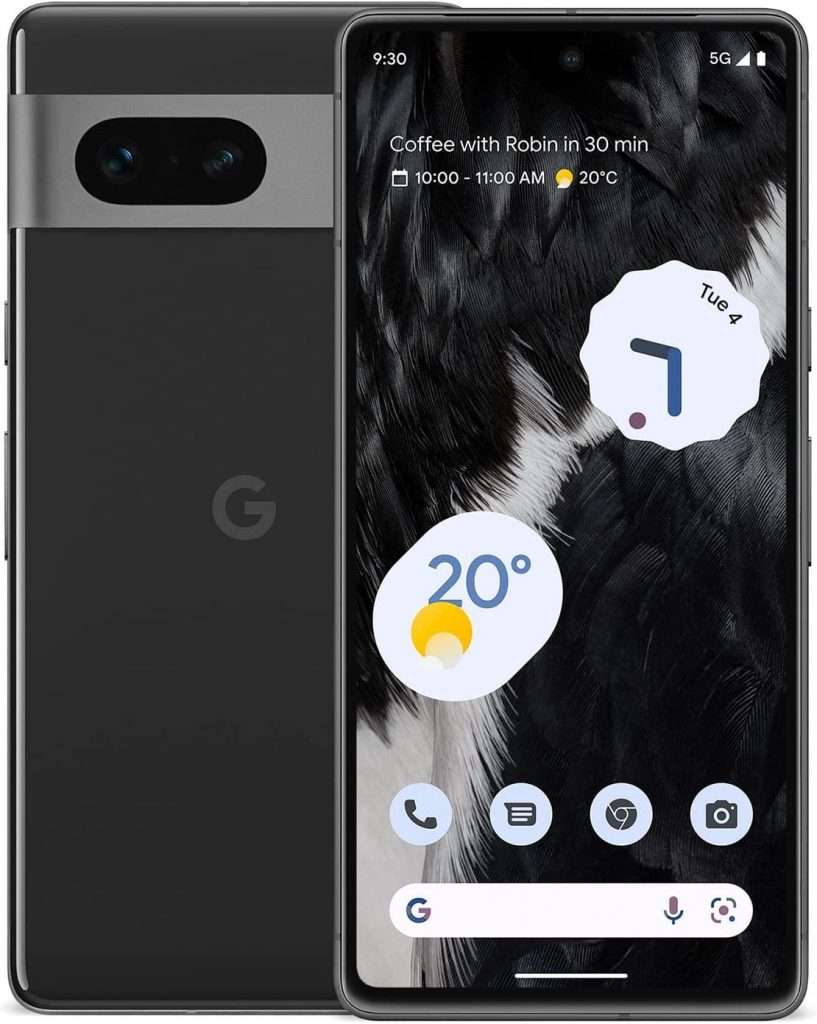 Internally, there’s a reduced 8GB of RAM, with storage options coming in either 128 or 256 GB. When it comes to the cameras, the two devices are largely the same, but there is no telephoto sensor to be found.

The Pixel 7 has a 50mp main camera with OIS and a 12mp ultra-wide-angle camera with 106-degree field of view. With Super Res Zoom, high-quality digital zoom photos with up to 8x magnification should be achievable, thanks to the Tensor G2 processor. The front camera uses the same 10.8mp sensor as in the Pro model, but offers a slightly wider field of view at 97 degrees.

With the battery, as expected, things have been reduced a bit to fit into the smaller form factor so there’s ‘only’ a 4355mAh battery inside, smaller than last year’s Pixel 6. The Pixel 7 is IP68 waterproof and, like the larger model, offers dual stereo speakers and the ability to securely unlock using facial recognition. 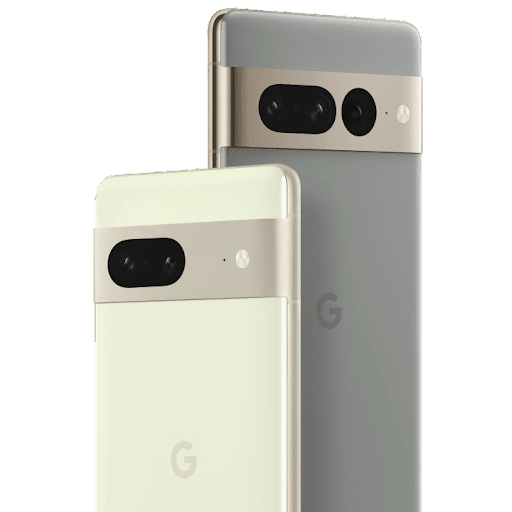 Now, moving on Google’s brand new smartwatch, the Pixel Watch. Since Google’s acquisition of Fitbit, people have been waiting to see how they would incorporate the two brands together and here we have it. The Pixel Watch can be seen as the most premium ‘Fitbit’ device yet but internally, the device is running Google’s latest version of Wear OS. 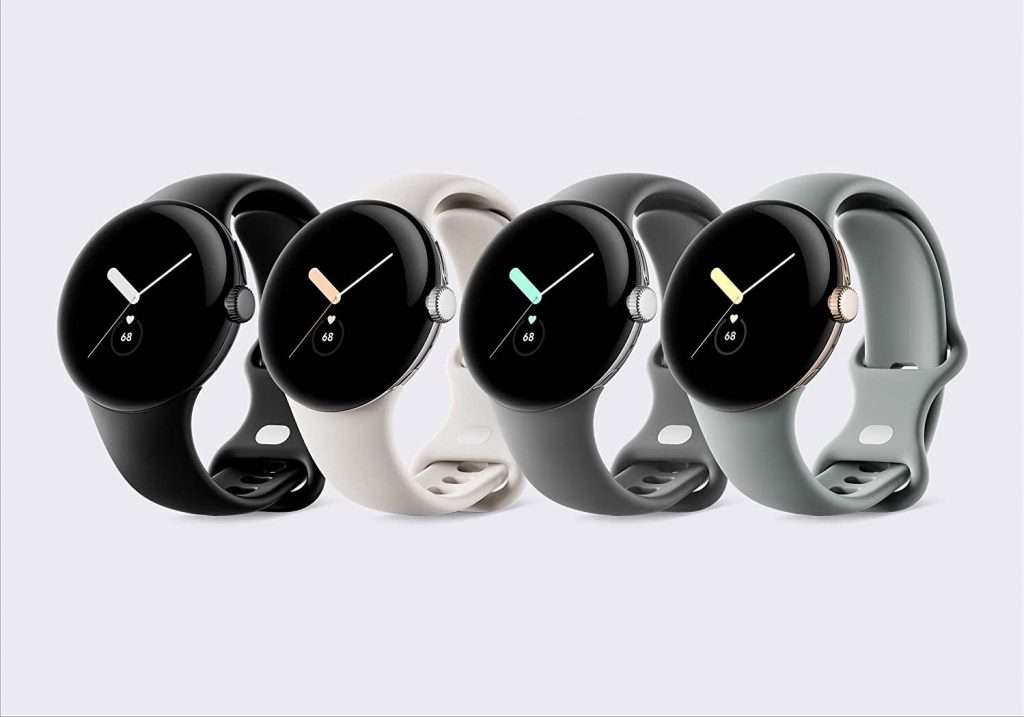 Up front, there’s a ​1.6″ AMOLED display with 320 ppi density and up to 1,000 nits brightness, The case itself is 41mm and there’s Corning Gorilla Glass 5 3D screen protection to help protect against scratches. 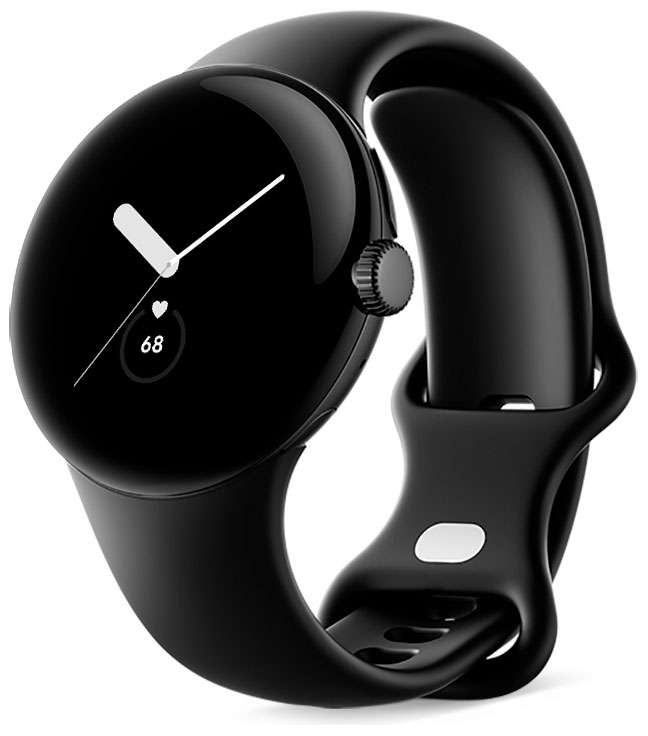 Under the hood, there’s a Samsung Exynos 9110 SoC, a Cortex M33 co-processor and 2GB RAM. Wear OS 3.5 software comes pre-installed along with support for Bluetooth 5.0 Wi-Fi 2.4GHz. Users will get access to the Wear OS version of the Google Play Store along with support for dedicated apps for Google’s own ecosystem apps such as Google Home, Maps, Wallet and Google Fit.

For mobile payments, there’s NFC support and for your health tracking, the Pixel Watch packs a heart rate monitor and ECG technology. The watch sports 5ATM water resistance and has expected battery life of 24-hour. 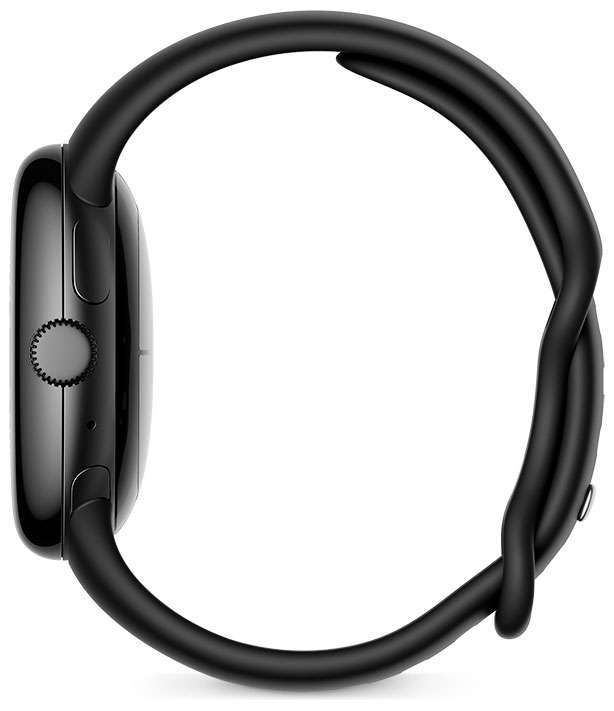 Users will also get access to Fitbit Premium for 6 months to test out all of the health and wellbeing focused premium features such as ​personalized insights, your sleep score breakdown, your monthly sleep profile, and a wellness report based on your Fitbit stats.

As expected, there will also be a wide range of additional bands available to help customise your Pixel Watch including a ‘Woven Band’ option. 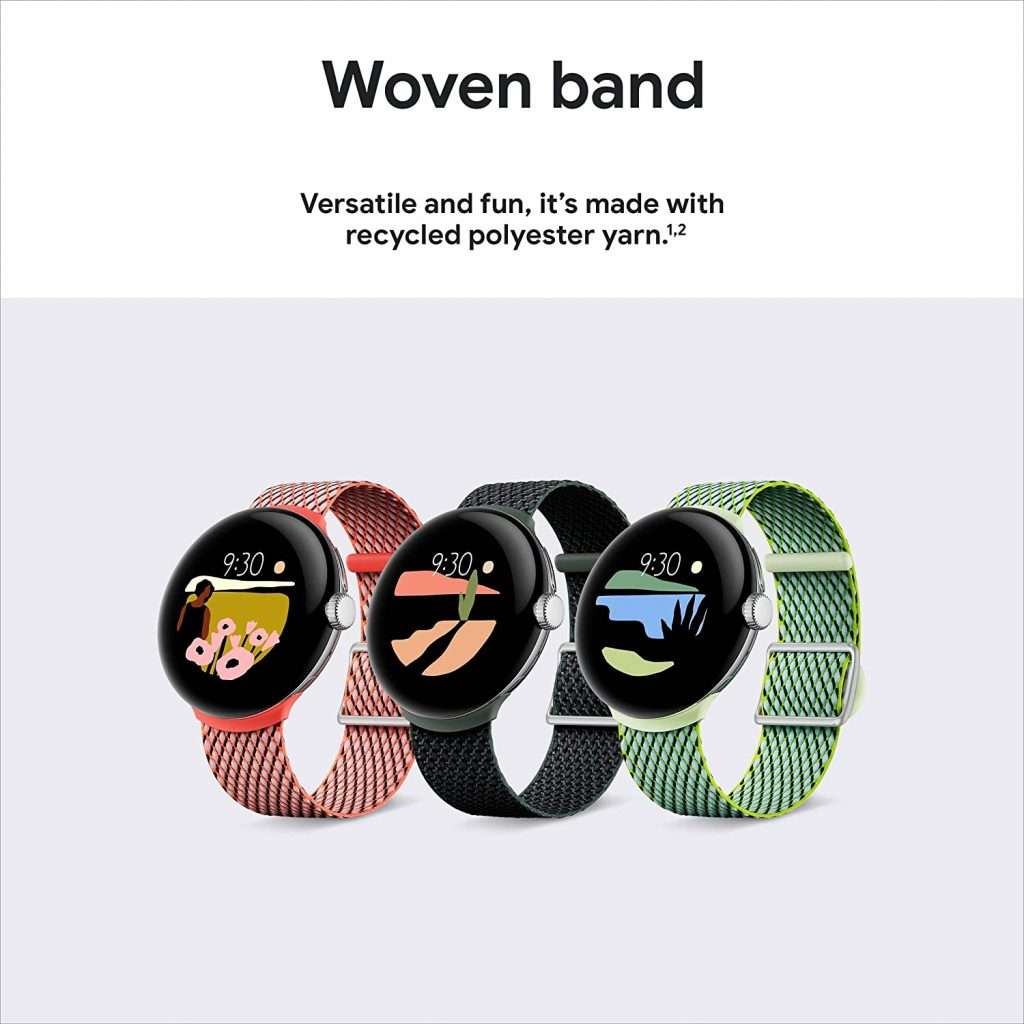 The Google Pixel Watch is available for pre-order now and will go on general sale Oct. 13th, starting at €379 for the Wi-Fi/Bluetooth only model.