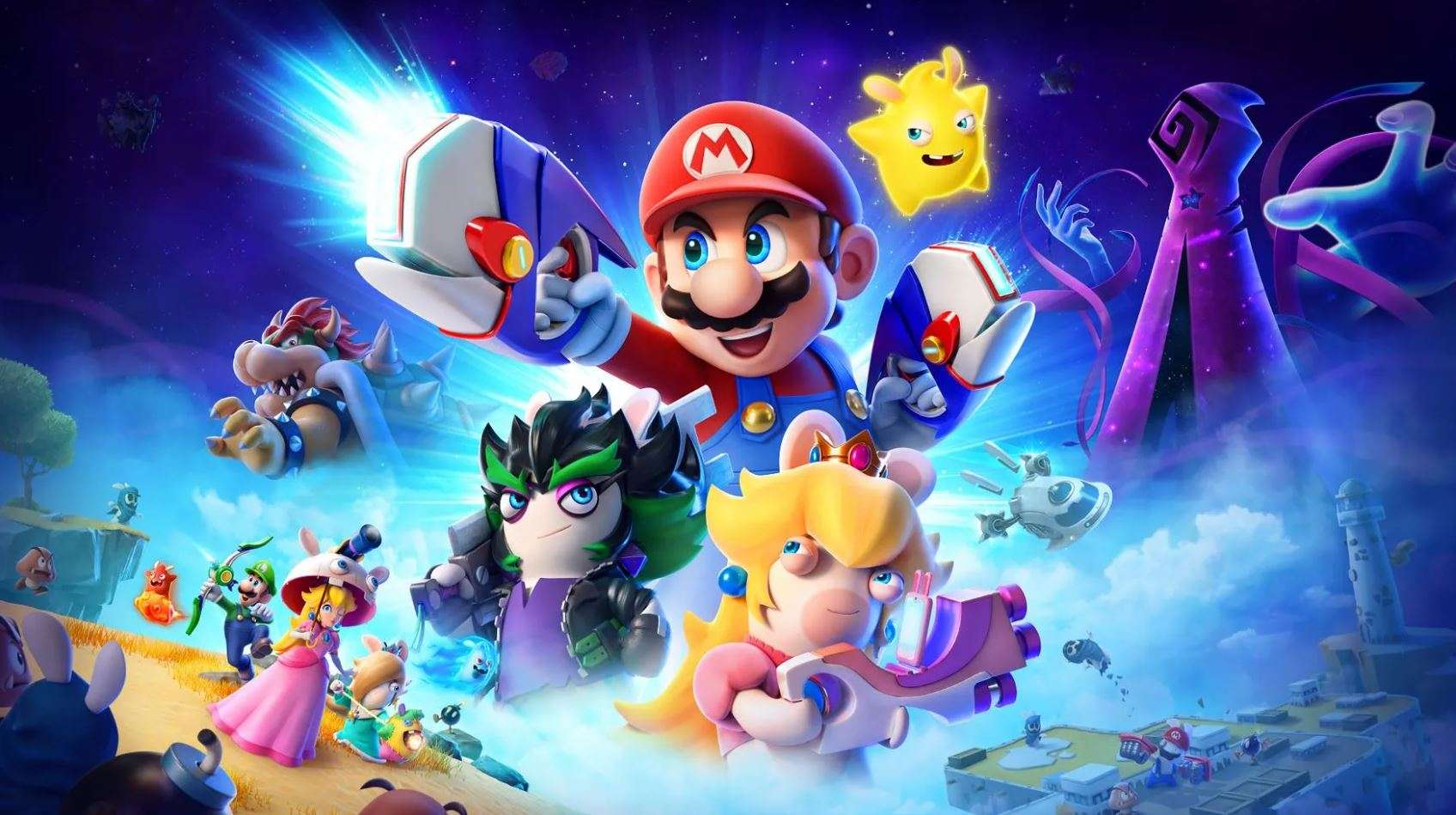 With bigger adventures, a larger setting and more tactical possibilities, the sequel to the surprise crossover tactics game Mario + Rabbids: Kingdom Battle, Sparks of Hope, expands the game in all the right places.

In August of 2017 fans of Mario and Ubisoft were blessed with a wacky collaboration between the beloved plumber and Ubisoft’s Rabbids in the turn-based RPG game, Mario + Rabbids: Kingdom Battle, where the Super Mario characters went on a journey to save the Mushroom Kingdom from the unhinged, mischievous Rabbids with the help of their Rabbid counterparts.

Developed by Ubisoft Paris and Ubisoft Milan and later published by Ubisoft for the Nintendo Switch, the hilarious and enjoyable game was loved by fans of all ages from its initial reception, and now they are getting a second game that is going to be extending further into the galaxy and bringing us much more entertainment.

The premise of Mario + Rabbids Sparks of Hope revolves around Mario, Luigi, Peach, and their Rabbid counterparts and their quest to stop Cursa, a malevolent entity whose mission is to consume as much energy as possible to carry out its evil plans. Cursa is out on a hunt, and it is up to Mario and the gang to save the universe. 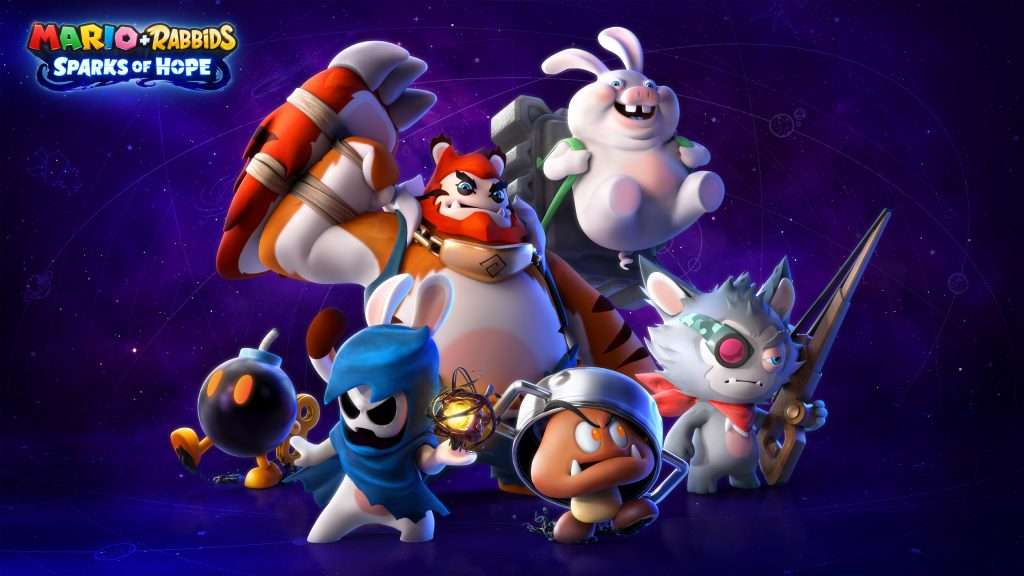 Continuing the theme of strange combinations, Sparks are what you get when you combine the Rabbids and the Luma from Super Mario Galaxy, and these adorable beings are front and center in this new adventure.

With a new adventure comes new features, and one change in Sparks of Hope is that each of the characters now fulfills a certain role in the team that’s reflected in their abilities and weapons. Luigi wields a bow and arrow that can deal more damage from a distance, Peach has an umbrella shotgun that has increased damage from close range, Rabbid Luigi has a frisbee-like weapon that bounces around multiple enemies, and so on.

This change alone results in a huge change to how the game is played, as you’ll be switching up party members often to better deal with the levels. Luigi is less effective in levels with multiple groups of enemies compared to the wider attack area capabilities of Rabbid Mario’s fists, for example. 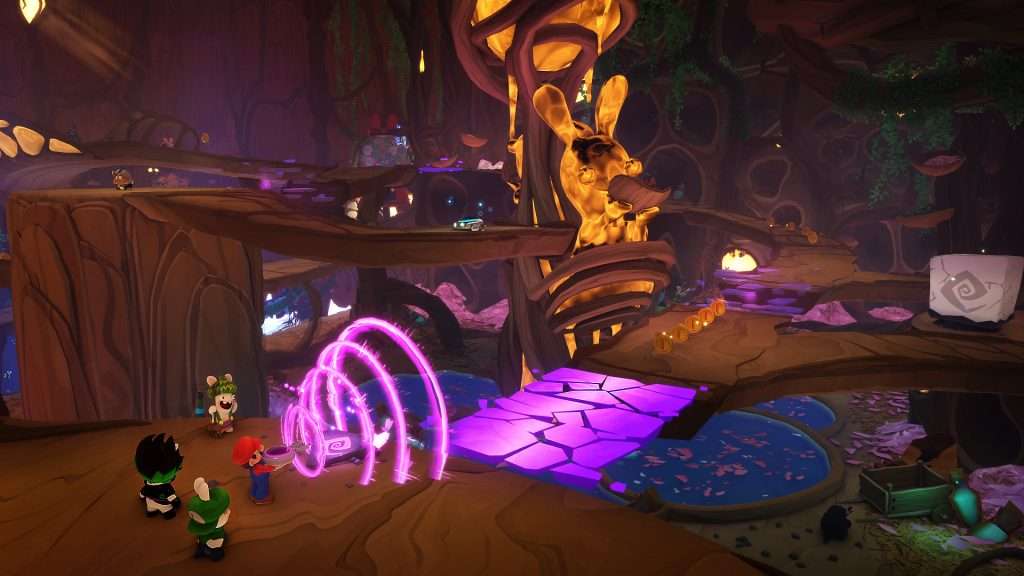 Using weapons is not the only thing our heroes can do in Sparks of Hope, as every character is given a number of other moves that they can do per turn, such as dashing and team jumping. Turns are built up in such a way that each character can do a certain number of actions before exhausting their turn, but firing their weapons will immediately render other actions unusable, so it is best to think of actions in advance.

Furthering the differences between each character are abilities that can be enhanced by Skill Prisms, items used for upgrading the various skill trees of each character, such as Health, Movement, Weapon, and Technique. Rabbid Luigi’s weapon can be upgraded to bounce more frequently across multiple enemies, while Peach can lessen damage dropoff for faraway enemies should you choose to build her that way. 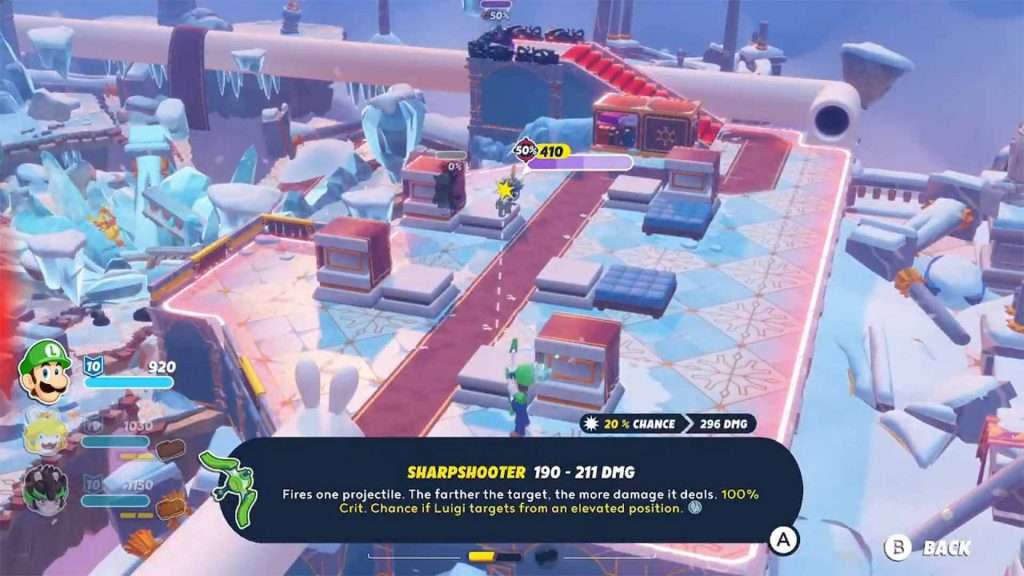 Builds are actually a thing in Sparks of Hope, and while the game doesn’t really have enough skill trees that are deep enough, these upgrades still add a very nice touch for players to tinker around with and try out different builds and playstyles.

You’ll notice that a recurring theme across the improvements made to this latest release revolves around adding more layers of strategy, and Sparks of Hope easily quenches the thirst for a more strategically-focused game compared to the first.

The title alone gives it away, and Sparks of Hope will see Mario and the gang save these creatures from Cursa’s grasp, eventually aiding the party in their quest. Sparks are plentiful, 30 in total, and can be obtained by simply progressing through the story or by finishing side quests scattered throughout the levels. 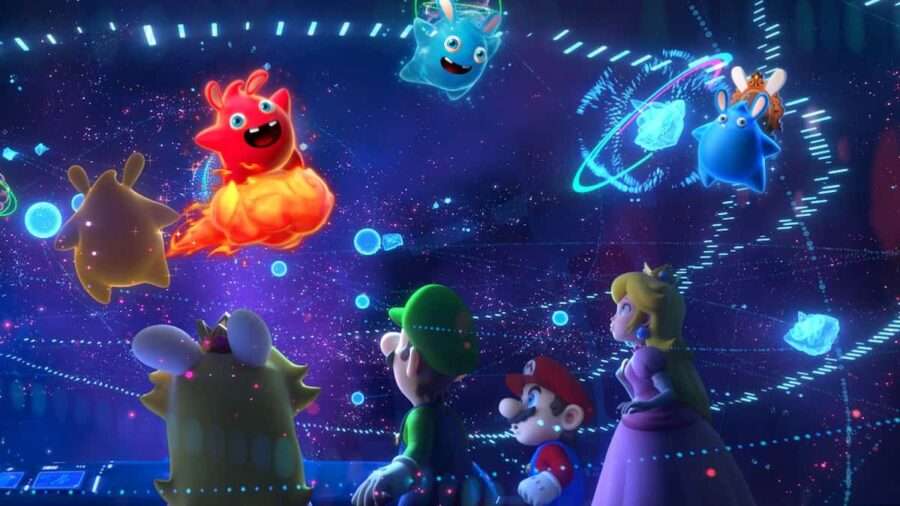 Sparks provide additional abilities to players that have various effects. Pyrostar, for example, has an ability that can grant weapons the burn effect, perfect for enemies weak to fire. Another Spark, Starburst, can enhance the attacks of all allies within range. These Sparks can also be equipped on anyone at any time and can be upgraded to improve their effects.

Tying everything together is one of the biggest changes the game has to offer, which is giving the players freedom of movement in and out of battle. Mario and the gang will trek through five planets that will pose many challenges. Each planet is a sort of open area reminiscent of various Mario games that hold coins, side-quests, puzzles, and collectibles along the way, offering a much fuller and well-crafted experience than just following a fixed path. 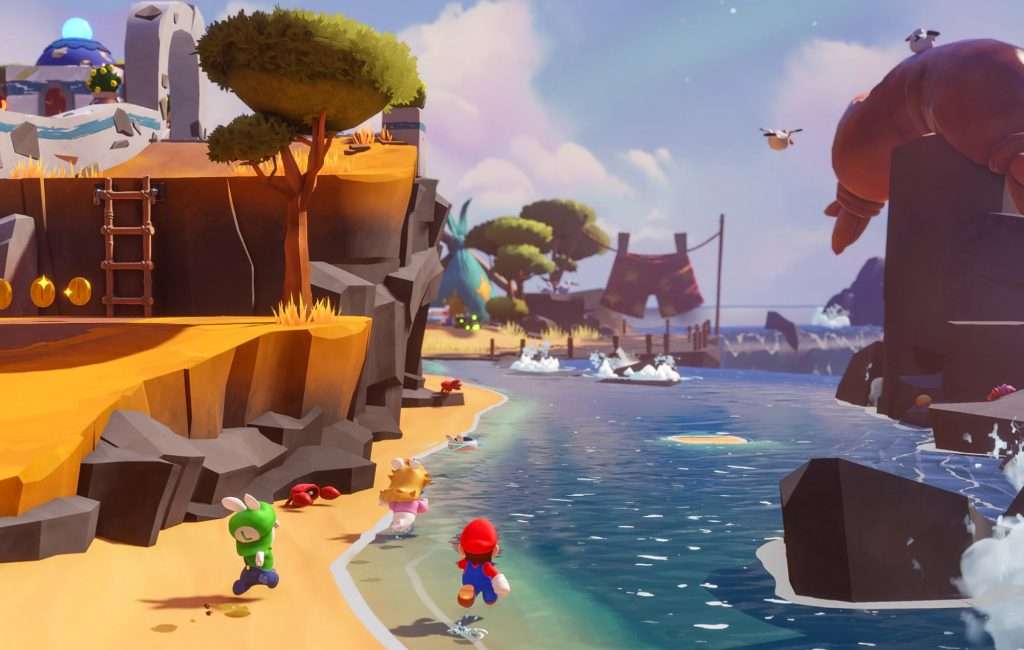 Enemies are littered across the map, which Mario can engage in and repeatedly farm as needed. You can think of them as your typical RPG encounters that will bring you to the battlefield should you wish to do battle with them. Some enemies will be more challenging than others due to their higher level requirements—another change to the game which employs a level-based progression over gear-based systems.

Battles in Sparks of Hope rely on free movement, where players can switch between party members at any time in-between actions to strategically position themselves for the next turn. Given proper planning, battles in Sparks of Hope can turn heavily in your favor if you can properly utilize your dash and attack points every time. 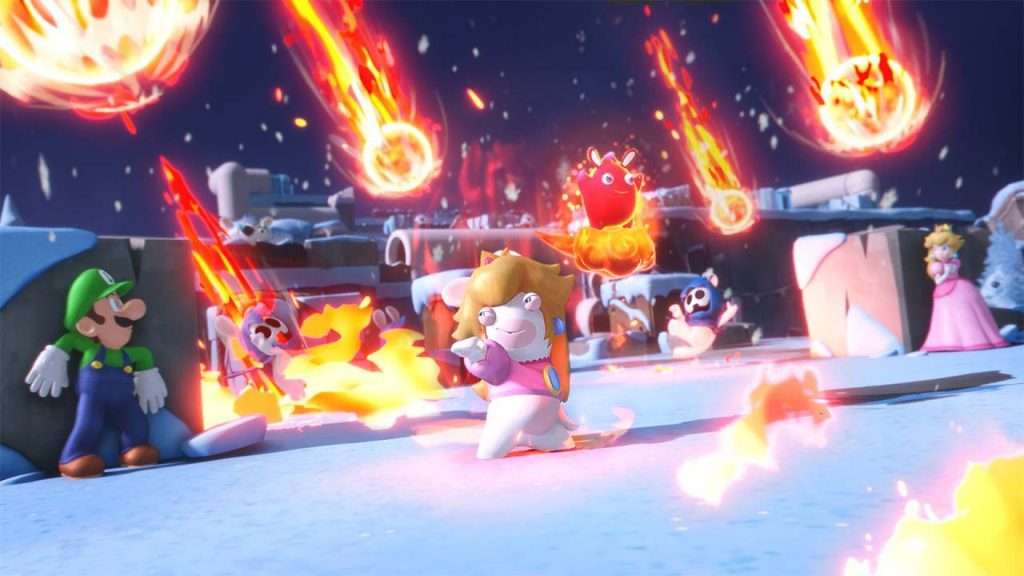 In practice, players can move Mario forward, switch to Luigi for a team jump allowing him to attack the furthest enemy, switch back to Mario to reposition, switch to Peach for another team jump, and switch back to Mario again before exhausting his own action points. The level of freedom in Sparks of Hope compared to the first game is quite staggering, and is such a refreshing take on the formula.

Just thinking about all of these aforementioned elements put together is what makes the gameplay in Sparks of Hope such an engaging process. Everything feels so involved and requires attention from the players to properly manage.

The world of Sparks of Hope is filled with vivid visuals worthy of its title. There are inhabitants, enemies, and numerous points of interest that range from beaches to snowy mountains. Everything feels livelier this time around, and the implementation of free movement allows players to explore the beauty of each planet at their own leisure, uncovering all of its secrets 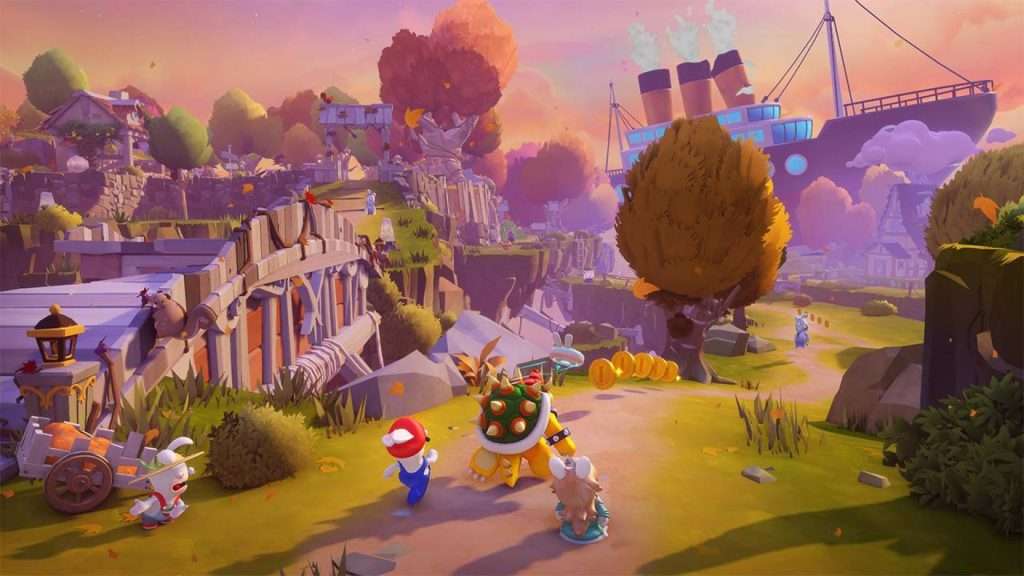 Bringing everything to life is the superb soundtrack of the game, which is handled by some of the most iconic names in the industry, such as Grant Kirkhope (Donkey Kong, Banjo-Kazooie), Gareth Coker (Dota 2, Halo Infinite), and Yoko Shimomura (Kingdom Hearts, Xenoblade Chronicles). It’s a fantastic soundtrack and is something that can easily be overlooked because of the other aspects of the game that shine along with it.

I do have a few minor nitpicks, especially when navigating through menus that feel unresponsive at times in addition to their clunky nature. Loading times are also plentiful but manageable, and the game feels a bit too easy even at the default difficulty level, despite the enemies hitting rather hard. 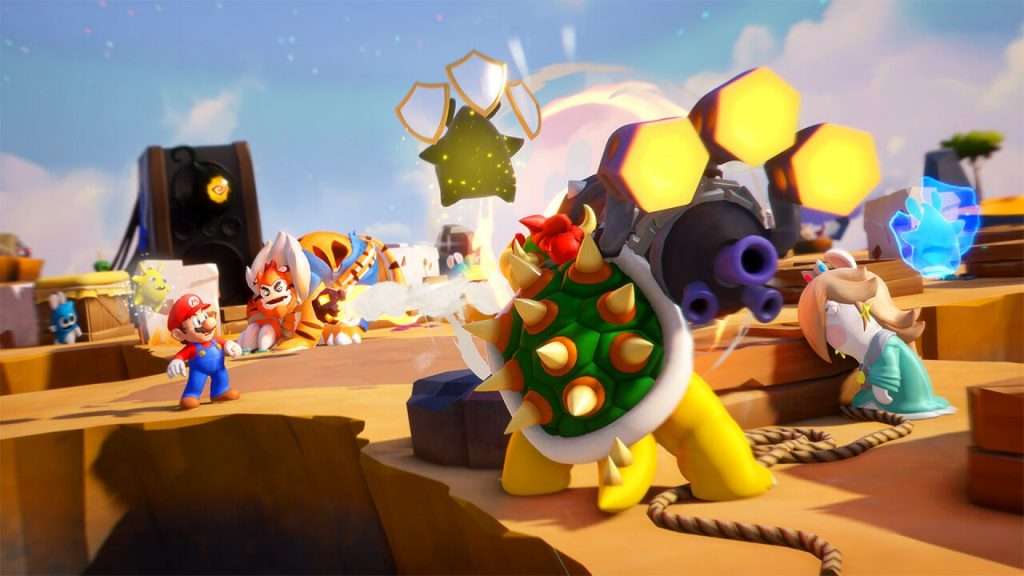 If anything, these complaints are easily overturned by everything else in the game that really makes Sparks of Hope a delightful adventure worthy of a space in your growing library of games.

Mario + Rabbids Sparks of Hope is a triumphant return for Mario and the Rabbids, offering a fun and engaging experience from start to finish that will be appreciated by both newcomers and fans of the first game.

The changes made here are significant, providing players with a refreshing take on the genre all while bringing the familiarity that makes it easy to pick up and play. All of the systems in the game don’t feel overwhelming, and introducing each element is paced just right to get players onboard without much confusion.

As odd as the combination may seem, this is clearly a hit for both Nintendo and Ubisoft, and it is easy to see that the partnership between Mario and the Rabbids will continue for more outings in the future.

Mario + Rabbids Sparks of Hope is available now, exclusively on Nintendo Switch, with an RRP of €59.99 for the standard edition. 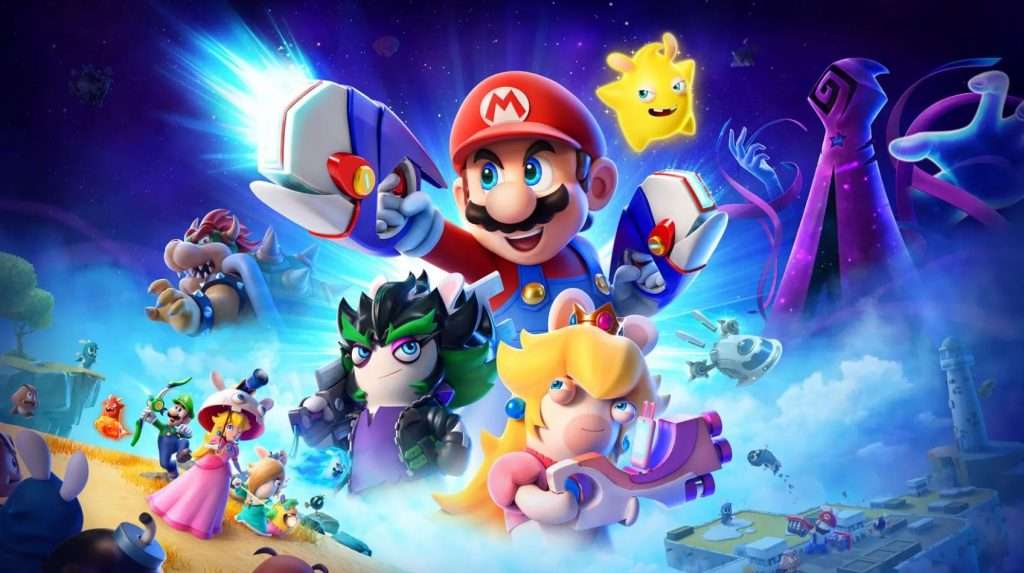 Mario + Rabbids Sparks of Hope is a triumphant return for Mario and the Rabbids, offering a fun and engaging experience from start to finish that will be appreciated by both newcomers and fans of the first game.